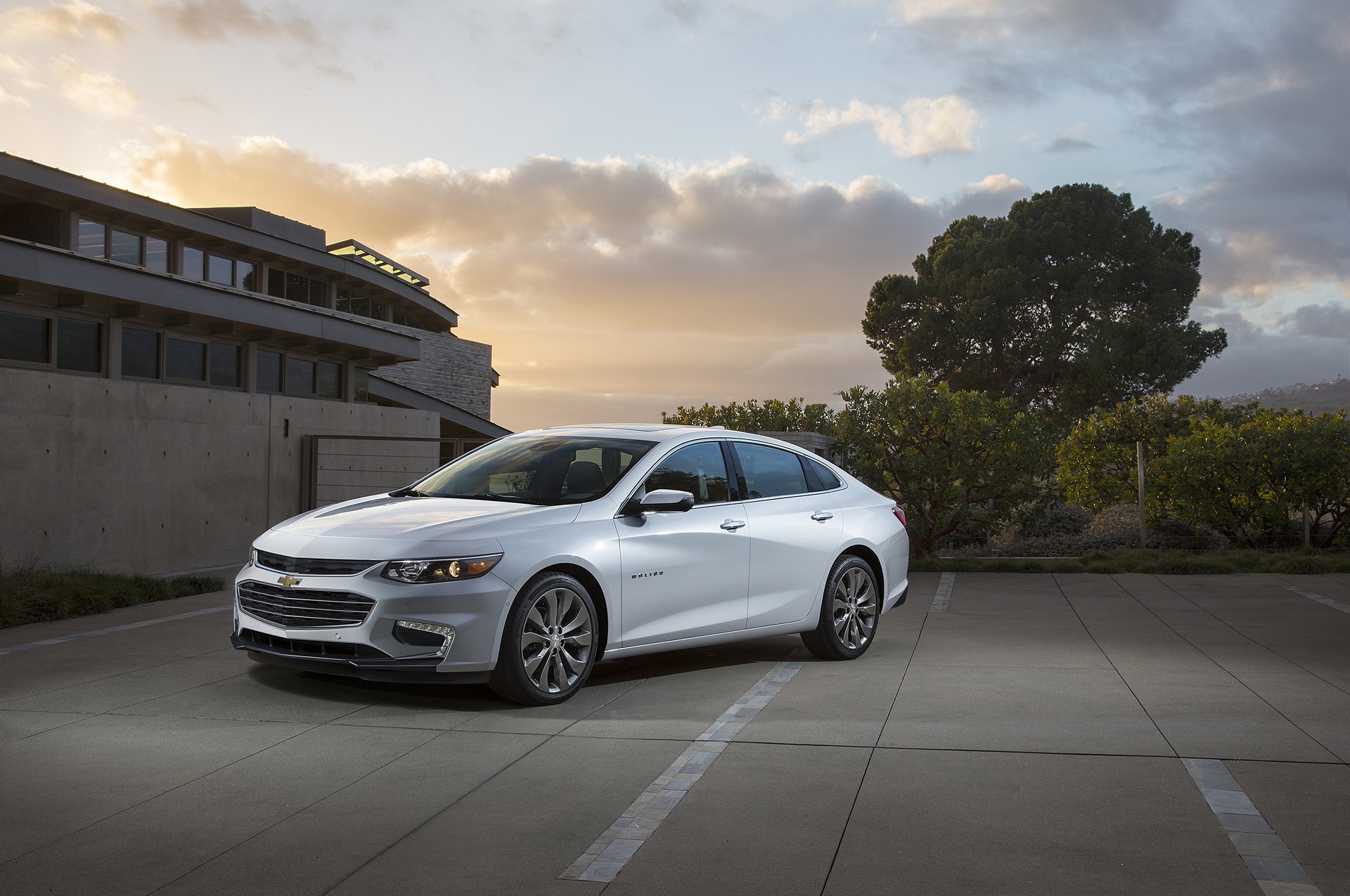 “Midsize car customers tell us they want great fuel economy and connected technologies, wrapped in a gorgeous exterior. This is exactly what the 2016 Malibu was engineered to do,” said Jesse Ortega, Malibu chief engineer.

The new Malibu will be offered in L, LS, LT and Premier trims, as well as the Hybrid model. An 80-cell, 1.5 kWh lithium-ion battery pack provides electric power to the hybrid system. It can power the Malibu Hybrid up to 55 miles per hour (88 km/h) on electricity alone. The gasoline-powered engine automatically comes on at higher speeds and high loads to provide additional power. In addition to the drive unit, the Malibu Hybrid also shares the 2016 Volt’s blended regenerative braking system, which provides maximum kinetic energy recovery during braking to be stored in the battery system to help maintain charge.

An all-new, Ecotec 1.5L turbo is the standard engine in the 2016 Chevrolet Malibu, offering a GM-estimated 37 mpg on the highway. It is part of a new global family of small-displacement gas engines designed with greater power density to deliver confident performance with excellent efficiency.

The new 1.5L turbo employs the stop/start technology introduced on the 2014 Malibu, which enhances efficiency in stop-and-go driving, contributing to a GM-estimated 27 mpg in city driving – an 8-percent increase over the current model. On the highway, 1.5L-equipped models also feature active grille shutters that reduce aerodynamic drag to optimize efficiency. A higher-output 2.0L turbocharged engine is available, offering a GM-estimated 250 horsepower (186 kW) and 258 lb-ft of torque (350 Nm), for a higher degree of performance – but not at the expense of good efficiency. Malibu 2.0T models are EPA-estimated at 22 mpg in the city and 33 on the highway.

Teen Driver and an expanded range of safety features

Teen Driver supports safe driving habits by muting the audio or any device paired with the vehicle when front-seat occupants aren’t wearing their safety belts. Teen Driver also provides audible and visual warnings when the vehicle is traveling over predetermined speeds.

To use Teen Driver, a parent enables the feature with a PIN in the Settings menu of the Malibu’s MyLink system, which allows them to register their teen’s key fob. The system’s settings are turned on only to registered key fobs. Chevrolet’s system is the first in the industry with a built-in component that lets parents view on a display how their teenager drove the vehicle. Maximum speed reached, distance driven and number of times active safety features were engaged are among the parameters that can be confirmed.

With a wheelbase stretching 3.6 inches (91 mm) longer than the current Malibu, along with a 2.3-inch (58 mm) longer overall length and the same overall width, the 2016 Malibu strikes a sleeker-looking proportion. The added wheelbase helps provide better in-cabin comfort and functionality.

With styling influenced by the 2014 Impala, the all-new Malibu advances Chevrolet’s global design language with features such as slim, sweeping headlamps and a progressive take on the brand’s characteristic dual-port grille. Three body-side creases also add drama to the design and help distinguish the Malibu as a contemporary Chevy.

The hood and the cowl – the area where the windshield meets the hood – are lower than the current model and contribute to the Malibu’s greater aerodynamic performance, as do active grille shutters on LS and LT models. Beneath the new Malibu’s athletic-looking skin is a stronger, lighter body structure that contributes to its efficiency and driving dynamics. Greater use of high-strength steels enables engineers to design the body structure with thinner components in some areas, delivering comparable crash performance with lower weight. The all-new body structure accounts for more than one-third of the Malibu’s nearly 300-pound weight reduction.

Roomier, with a more comfortable and connected interior The cabin’s open, expansive feel is reinforced with a greater emphasis on comfort, convenience and connectivity, allowing the Malibu to keep pace with customers’ connected lives. Highlights include: Malibu’s 7-inch MyLink infotainment system gives owners a smart and simple way to access Android Auto and Apple CarPlay. The eight-inch version of MyLink will be compatible only with Apple CarPlay at the beginning of the 2016 model year. While development and testing are not yet complete, Android Auto compatibility may be available on the 8-inch version of MyLink later in the 2016 model year.

Each system builds off of the features smartphone users rely on most. Android Auto is built around Google Maps, Google Now and the ability to talk to Google, as well as a growing audio and messaging app ecosystem that includes WhatsApp, Skype, Google Play Music, Spotify, and podcast players. A full list of supported apps is available at Android.com/auto.

Apple CarPlay takes the iPhone features customers want to access while driving and puts them on the vehicle’s display in a smart, simple manner. That allows drivers to make calls, send and receive messages and listen to music right from the touchscreen or by voice via Siri. Apple CarPlay supported apps include Phone, Messages, Maps, Music and compatible third-party apps. A full list of those apps is at Apple.com/ios/carplay. Many features can be controlled via voice commands through a button on the steering wheel, helping drivers spend more time with eyes on the road and hands on the wheel.

The 2016 Malibu is built from globally sourced parts at GM’s Fairfax Assembly Plant, in Kansas City, Kan. GM will invest $174 million in the Fairfax plant for new tooling and technology to support its production and improve customer satisfaction.