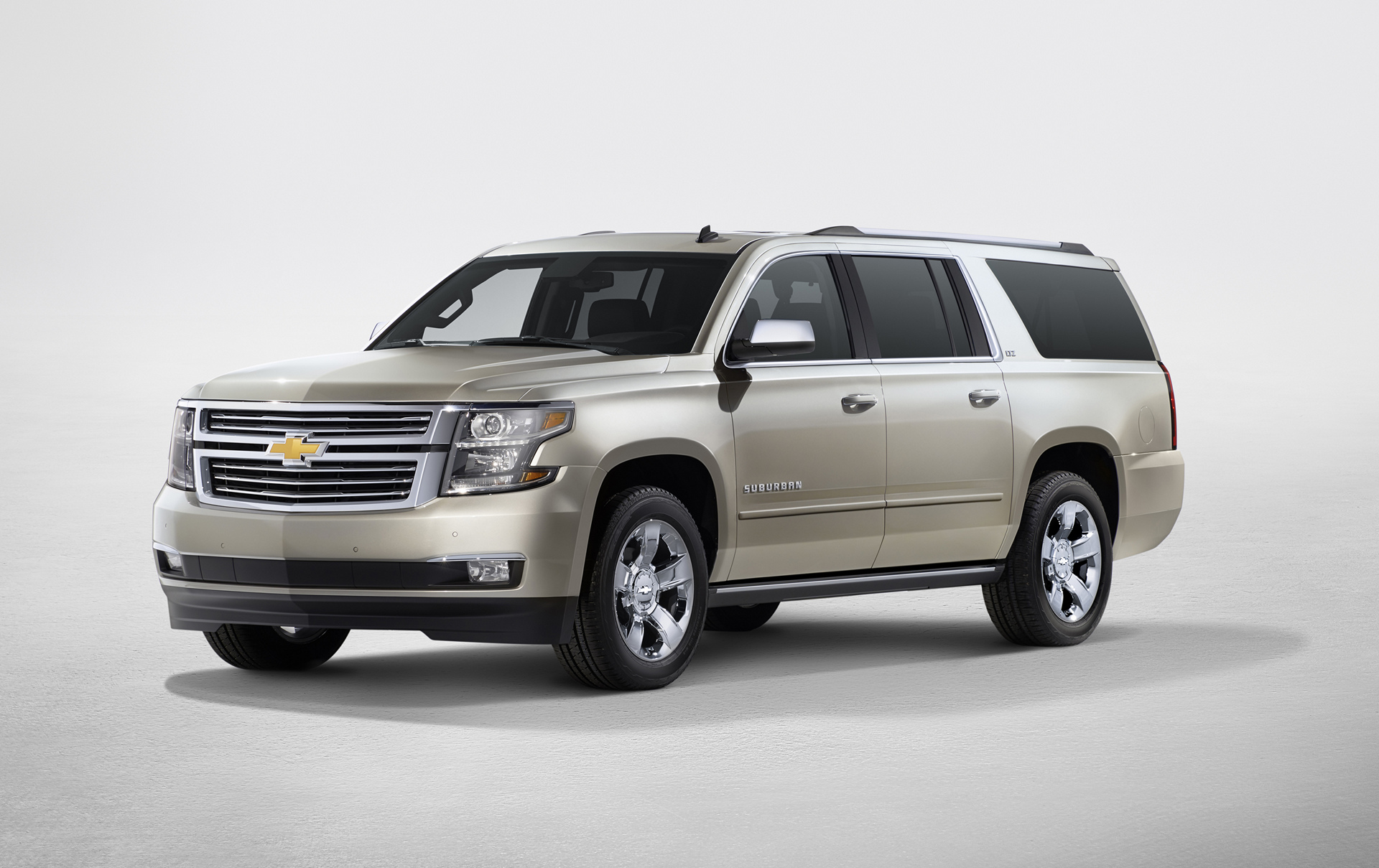 After 80 years of setting the bar high, the Chevrolet Suburban underwent a complete redesign in 2015, offering a more contemporary take on the full-size SUV’s legendary functionality, performance and convenience features.

Now for 2016 models, Suburban adds to its impressive array of technology and safety components with several upgrades, including an Enhanced Driver Alert Package. The new package, which is available on the LS, includes a number of active safety features and security functions, such as power-adjustable pedals, Forward Collision Alert and the Safety Alert Seat. Also included in the package, Lane Keep Assist helps avoid unintentional lane departures and actually assists in keeping the vehicle in the correct lane by gently turning the steering wheel as the SUV approaches a detected lane marking without the use of a turn signal. Using a camera mounted on the windshield in front of the rearview mirror, Lane Keep Assist works between the speeds of 37 mph and 112 mph and won’t engage if it detects the driver is actively steering. Another feature in the package, IntelliBeam headlamps, automatically turn a high-beam headlight on and off according to traffic conditions, making for a safer ride. Suburban is the perfect vehicle for active families who need extra space for many passengers and their cargo. Along with the Chevrolet Tahoe, Suburban accounts for almost 50 percent of the full-size SUV segment.

The 2016 Suburban is offered in LS, LT and LTZ models, with many impressive functionality and technology features, such as: Refined and precisely sculpted, Suburban’s exterior design showcases inlaid doors that fit into the body side openings instead of over the top of the body, significantly improving the quietness of the interior cabin and contributing to improved aerodynamics. This helps the vehicle slip through the air on the highway with less drag, for greater efficiency. Lightweight aluminum hood and liftgate panels also enhance efficiency through reduced overall mass. Projector-beam headlamps flank the Chevrolet-signature dual-port grille – chrome on all models – and sweep into the front fenders. High-intensity discharge headlamps and light-emitting diode daytime running lamps are included on LTZ, along with an exclusive chrome grille surround. Inside the Suburban, premium materials and enhanced ergonomics demonstrate the perfect blend of sophistication, craftsmanship and function. Focus on technology and connectivity is more important than ever.

The instrument panel, for example, has a technology-driven design featuring a large, easy-to-view cluster. Available on LTZ, it includes an 8-inch-diagonal color driver information center display in the center of the reconfigurable gauge cluster, for vehicle, infotainment and other data. There’s also an eight-inch-diagonal color touch screen radio in the center of the instrument panel, incorporating secured storage behind the motorized screen. The Suburban’s seats are designed for greater comfort and durability. A high-wear cloth seat material is available on LS and LT, and the second-row bench seat reclines. Additional seating features include: The third-row seat folds flat to the floor, making it simpler to switch from passenger use to cargo carrying. The second- and third-row seats’ available power-release folding option makes it easier to load bulky items from the rear, and eases entry/exit to the third row. Power-release folding switches are located at the second-row doors and at the rear liftgate opening. New for Suburban in 2016, Chevrolet’s new MyLink system with an 8-inch-diagonal color touchscreen is compatible with Apple CarPlay, which puts iPhone features (iPhone 5 and later) on the display in a smart, simple manner, allowing drivers to make calls, send and receive messages and listen to music right from the touchscreen or by voice via Siri. That helps drivers spend more time with eyes on the road and hands on the wheel.

OnStar with 4G LTE connectivity and Wi-Fi hotspot provides a mobile hub for drivers and passengers to stay connected. The hotspot is on whenever the vehicle is on and comes with a three-month/three gigabyte data trial.

4G LTE is the most current and fastest mobile data network – 10 times faster than 3G and 100 times faster than the previous generation of OnStar hardware. And with OnStar, it also offers stronger, broader coverage than smartphones on the same network and it’s easy to use: If the vehicle is on, the connection is on.

At the time of purchase, six months of OnStar Guidance includes all of OnStar’s advisor-based safety and security features, including Automatic Crash Response and Stolen Vehicle Assistance, as well as turn-by-turn navigation. The 2016 Suburban is engineered for a quiet, controlled ride and an improved steering and braking feel. It all starts on a stronger, fully boxed, perimeter frame, which supports payload and trailering capability that body-frame-integral crossovers and SUVs can’t match. Suburban’s EcoTec3 5.3L V-8 engine is rated at 355 horsepower (265 kW) and 383 lb-ft of torque (519 Nm), and features state-of-the-art technologies including direct injection, cylinder deactivation, continuously variable valve timing and an advanced combustion system – all designed to make the most of power, torque and efficiency across a broad range of operating conditions. A Hydra-Matic 6L80 six-speed automatic transmission is paired with the new 5.3L engine and brings its own efficiency with reduced engine speed on the highway. It also features TapShift control, Tow/Haul mode and Auto Grade Braking. Because the safest crash is the one that never happens, the Suburban is equipped with standard and available technologies that serve as an extra set of eyes and ears to the driver, including an available Safety Alert Seat that vibrates if the system determines the driver is at risk of colliding with another vehicle.

Driver assistance begins with a standard rear vision camera that shows the area immediately behind the vehicle in the audio screen. The camera is especially helpful when hooking up a trailer. It also offers the segment’s only front-seat center air bag (bucket-seat models), which is engineered to provide additional protection for drivers and front passengers in far-side impact crashes, where the affected occupant is on the opposite, non-struck side of the vehicle.

Additionally, Suburban offers seven standard air bags, including the segment’s only front-seat center air bag. Seat-mounted side-impact air bags help protect the chest and pelvic regions of the driver and outside front passenger in a side-impact.

From a security standpoint, Suburban offers an available security system featuring glass breakage sensors, motion detectors and a self-leveling inclination sensor that sounds an alarm if a thief attempts to steal wheels or tires, or tow or lift the vehicle onto a flatbed truck.