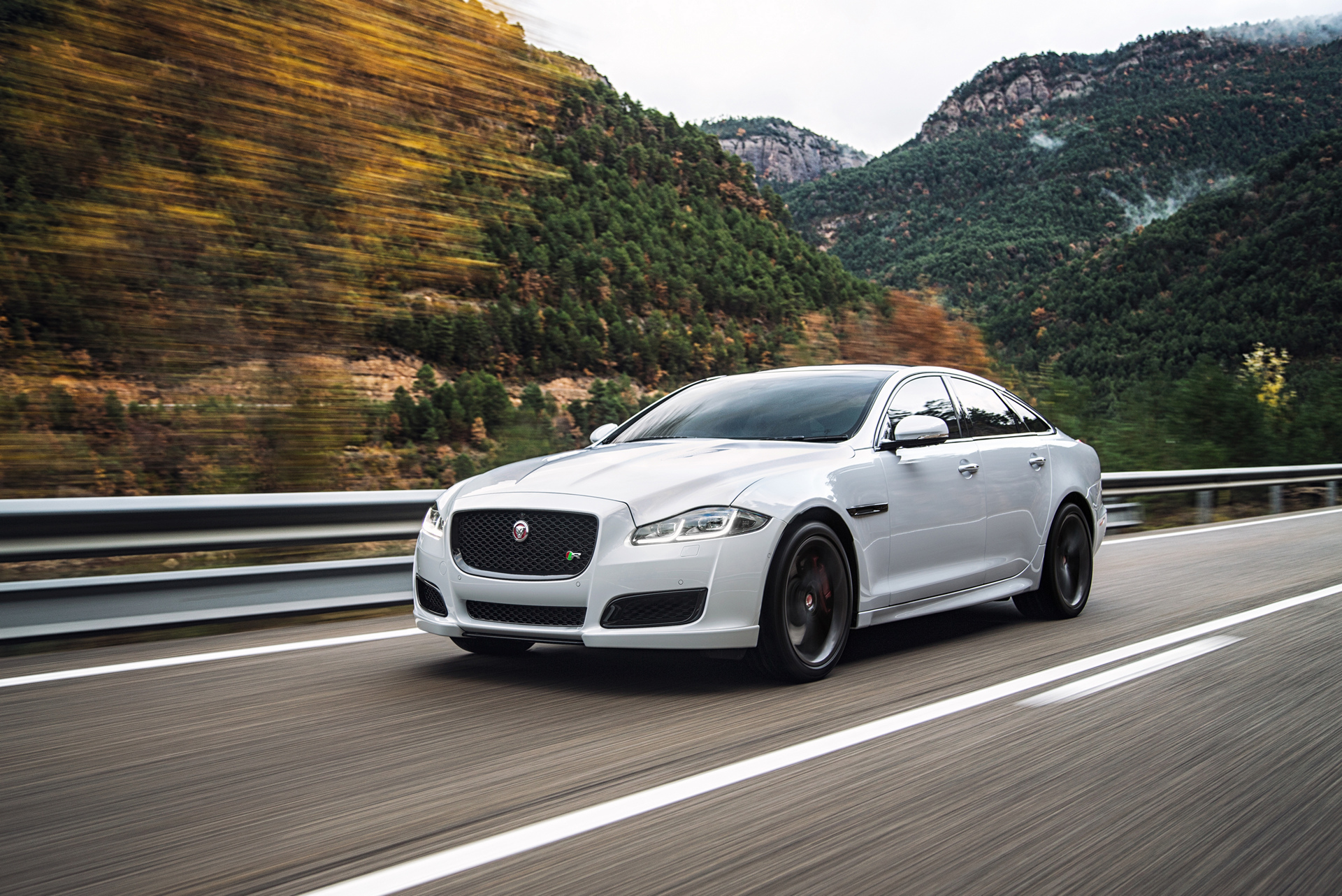 For 2016 Jaguar has realigned the pricing of the XJ to position it at the center of its competitive set. Combined with a progressive exterior redesign, improved infotainment and connectivity features and a new best-in-class warranty and customer care coverage, this new pricing structure presents a significantly more attractive value proposition to luxury buyers and emphasises a shift in the Jaguar brand. Featuring a new, more progressive look, the exterior of the 2016 XJ incorporates an updated front fascia that includes a larger, more upright grille with a new mesh pattern, a subtly redesigned front bumper and newly sculpted chrome blades in the lower air intakes. The Jaguar XJ continues to feature all-aluminum construction reducing weight and improving performance and is offered in two wheelbases – standard and long. Expanding on the duality of character of the XJ, for 2016, the model line-up has been redefined to further differentiate standard and long wheelbase variants. 14×14-way seats will also be available on XJ R-Sport models as part of the Comfort Pack that bundles the increased adjustment features with front seat massagers, passenger memory, 4-zone A/C and an electric rear sunblind. XJL Portfolio and XJL Supercharged are further distinguished with the introduction of quilted seating surfaces finished with a diamond sewn pattern on the seat center and cushion; 14×14-way power seats with 4-way lumbar adjustments are standard.

Front and rear heated and ventilated seats are standard on all 2016 XJ models. The 3.0-liter supercharged V6 develops 340hp and 332 lb-ft of torque and is available with rear- or all-wheel drive. Characterized by its linear power delivery and free-revving nature, this engine also delivers a unique soundtrack thanks to meticulously-tuned intake and exhaust systems.

The 5.0-liter supercharged V8 continues to be offered in 470hp and 550hp variants, delivering all of the performance promised by the dramatic styling of the XJ.

All powertrains feature a specifically-optimized eight-speed automatic transmission from ZF®. Each has been developed to provide the perfect balance of unrivalled performance, shift comfort, dynamics and efficiency.

Following years of development and testing, as well as meticulous tuning work from the Jaguar engineering team, the brand has now incorporated Electric Power Assisted Steering (EPAS) on rear-wheel drive models of the brand’s flagship sedan. Unlike hydraulic systems, EPAS only uses energy when the driver turns the wheel, so the reduction in parasitic losses helps to reduce fuel consumption and increase overall vehicle efficiency. The system’s ability to filter-out steering disturbances from poor road surfaces and compensate for road camber make the steering feel smoother and more precise than ever. Friction has also been engineered-out, improving steering feel and responsiveness further.

For 2016, the XJ is equipped with InControl Touch Pro™, an all-new infotainment system designed to be simple and intuitive. Conceived in-house and built around a quad-core Intel processor, 60GB solid-state drive and a next-generation Ethernet network, InControl Touch Pro™ can handle large amounts of data and is exceptionally powerful and responsive.

The centerpiece of the system is its eight-inch capacitive touch-screen that works more like a modern smartphone than an automotive infotainment system. The home screen can be customized selecting one of several available wallpaper images, widgets offer shortcuts to favorite features and functions, and additional home pages can be added, if desired.

The touch-screen responds to common ‘pinch to zoom’ and ‘swipe’ gestures allowing drivers to scroll between home screens. Using this technology, the simple, intuitive user interface of the InControl Touch Pro™ system is designed to minimize driver distraction. Jaguar has also incorporated a secondary full-screen navigational display in the vehicle’s updated instrument cluster, improving line of sight driving and reducing the amount of time a driver needs to take his/her eyes off the road.

The functionality of the navigation system is just as impressive. Maps stored on the 60GB solid-state drive of the InControl Touch Pro™ system can be accessed quicker than with conventional hard drives. Dead-reckoning functionality accurately determines the vehicle’s position even when GPS signals cannot be received.

InControl Touch Pro enables door-to-door route planning and guidance, including public transportation options. A companion app allows drivers to plan their route offline and load it into the system at the start of the journey. Once the driver exits the car and the phone is disconnected from the vehicle, the app will continue to provide navigational directions, if need be, on the driver’s phone.
A new Commute Mode has also been developed which learns the driver’s daily commute to and from the home or office and can automatically offer alternative routes to avoid congestion using historical and real-time traffic information. Approach Mode displays a 360-degree interactive view of the driver’s surroundings on the infotainment screen as they get to within 656ft (200m) of their destination, and can even direct the driver to the nearest available parking space. The new XJ is the latest vehicle to offer Jaguar InControl® Apps™; an innovative, intuitive technology that enables customers to seamlessly connect their Apple® and Android™ smartphones to the vehicle’s infotainment system, via a designated USB port. InControl Apps™ provides access to compatible apps on the customer’s smartphone using the vehicle’s touch-screen as the main interface.

Enhanced for 2016, the InControl Remote™, accessed through the InControl Remote App, allows the driver to bring the cabin to a pre-set temperature by remotely starting the engine, check how much fuel is in the tank, remotely lock or unlock the doors and get alerts if the alarm goes off. The app also helps owners locate their vehicle with a map displayed on their smartphone, in case the vehicle was parked in an unfamiliar area.

Using the vehicle’s antenna, the new XJ can also function as a Wi-Fi hotspot, providing a 3G connection for up to eight connected devices.
Should the car be involved in a collision severe enough to trigger the airbags, InControl Protect™ automatically notifies emergency services and provide the vehicle’s GPS location. Occupants can also trigger an emergency call or roadside assistance manually by pressing a button on the overhead center console.

The new XJ is the latest Jaguar to benefit from the brand’s new All-Surface Progress Control (ASPC) technology. Designed to help drivers pull away smoothly on very low friction surfaces, ASPC is a unique system which can make it easier to drive a powerful car, whether RWD or AWD, at low speeds on snow, ice, wet grass or other low traction environments.

ASPC works like a low-speed cruise control and operates between 2.2mph and 19mph (3.6km/h and 30km/h). The system is activated by pressing a button on the center console, in conjunction with the cruise control switches on the steering wheel to set the maximum speed. Once set, ASPC controls the throttle and brakes, all the driver has to do is to steer.

What makes ASPC so effective is that it doesn’t just provide fine control of the throttle, it also uses the vehicle’s brakes in conjunction with the throttle. From a standstill, only very low engine torque is applied to the driven wheels, enabling smooth progress with little or no wheel spin. ASPC is compatible with rear- and all-wheel drive can be made even more effective by the fitment of winter tires.

The traffic sign recognition system relies on a forward-facing camera to keep the driver informed of speed limits – including temporary limits which may be in force through road work, for example, and variable limits on highways. Camera data is compared against GPS data, enhancing accuracy and robustness.

The new queue assist function for the adaptive cruise control system has been designed to reduce the effort and monotony of driving in heavy traffic. Using a long-range radar sensor, the system can now maintain a safe distance from the vehicle in front, modulating throttle and braking duties, all the way down to a standstill.

Building on the benefits of blind spot monitoring, the Closing Vehicle Sensing system uses radar sensors to alert the driver to the presence of vehicles approaching fast from behind when changing lanes by displaying a flashing icon in the corner of the side mirrors.

The adoption of EPAS in RWD vehicles enables the new XJ to provide semi-autonomous park-assist functions for both perpendicular and parallel parking. Ultrasonic sensors measure the space first and, if it’s large enough, the system helps manoeuvre the car into position – and, in the case of parallel parking, out again. The driver just controls the accelerator and brakes.
In addition, there’s a surround camera system, available on both RWD and AWD models, which combines the view from four cameras to provide a 360-degree view of the area around the car, including a plan view, to make manoeuvring easier.

The radar sensors equipped on the XJ can also help alert the driver of potential hazards when reversing. If the system senses a vehicle approaching from either side while the XJ is in reverse, the driver is given audible and visual warnings.

The XJ is manufactured alongside the F-TYPE and the all-new XF at the Jaguar Land Rover Castle Bromwich Plant and will be available to U.S. customers in the Fall of 2015.