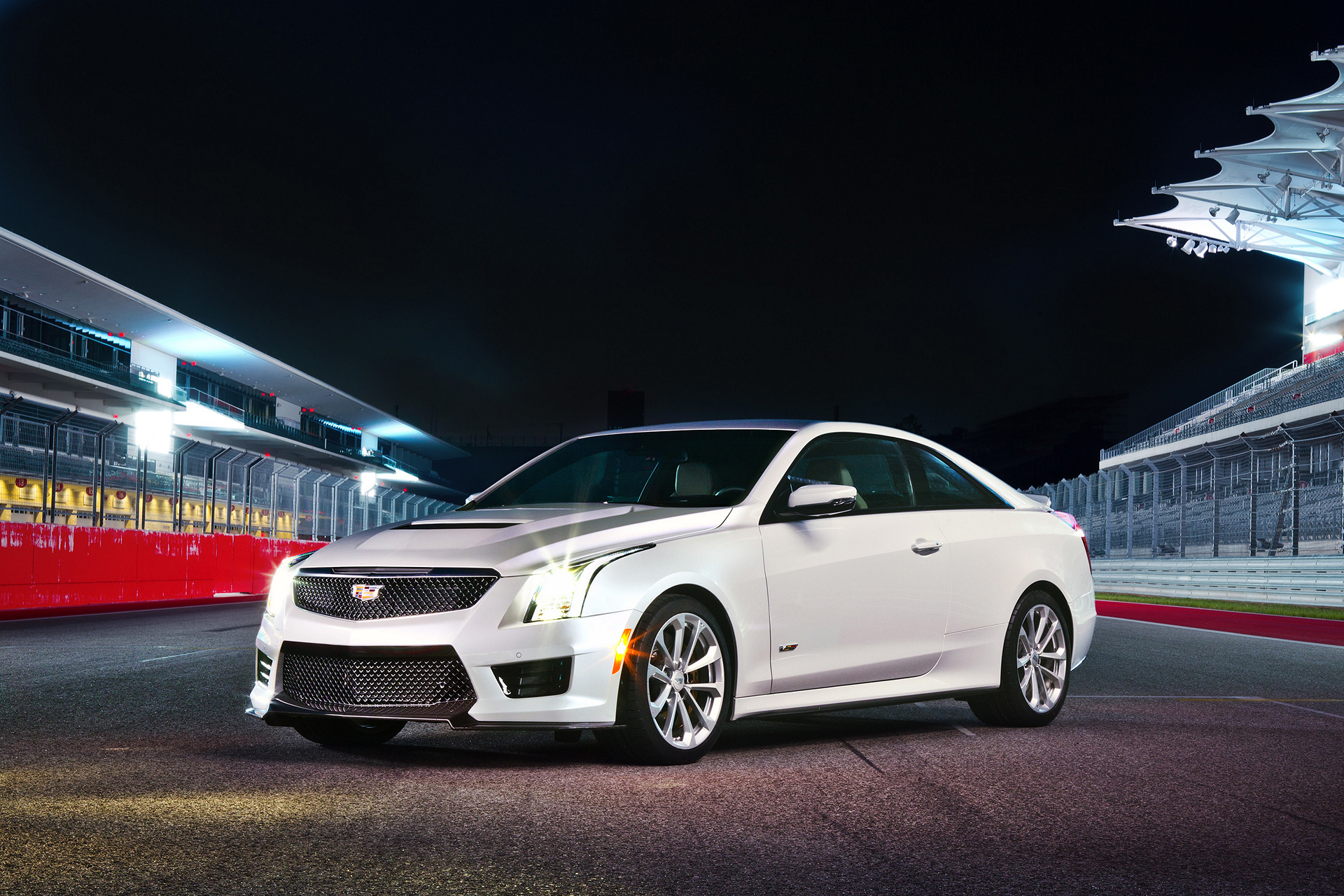 The first-ever ATS-V – offered as a coupe and sedan – introduces class-leading twin-turbocharged power and a comprehensive suite of design and performance systems, expanding the ATS product line and advancing the V-Series legacy with its first turbocharged entry. 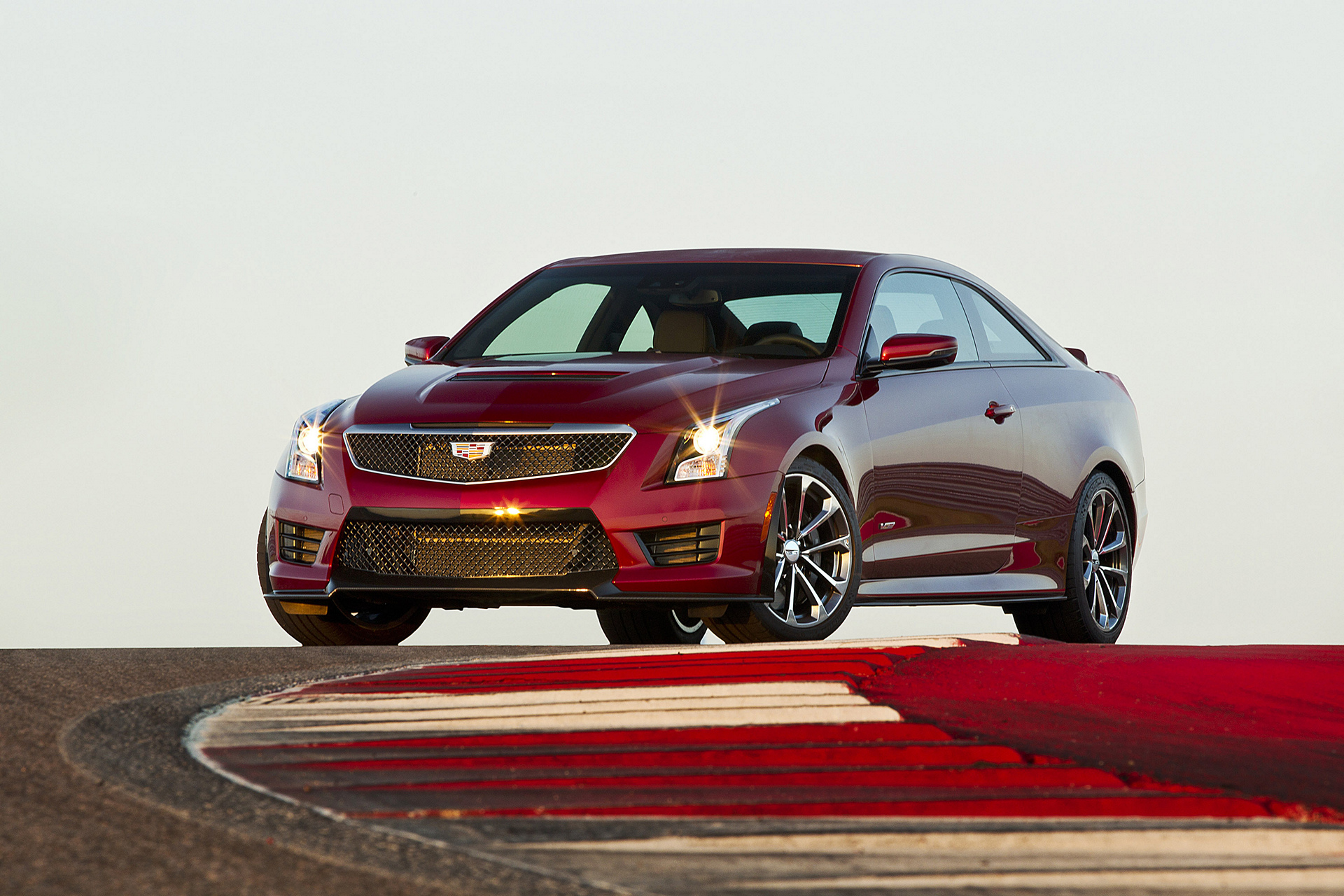 Since its inception in 2004, Cadillac’s V-Series has driven remarkable power and performance capability into the brand’s growing luxury car range. Building on the strengths of the award-winning ATS product line, the V-Series adds impressive track capability to what was already the lightest and most agile-driving car in the luxury compact class. The result is a dual-purpose luxury performer – a car with true track capability right from the factory that is also a sophisticated luxury car on the road. 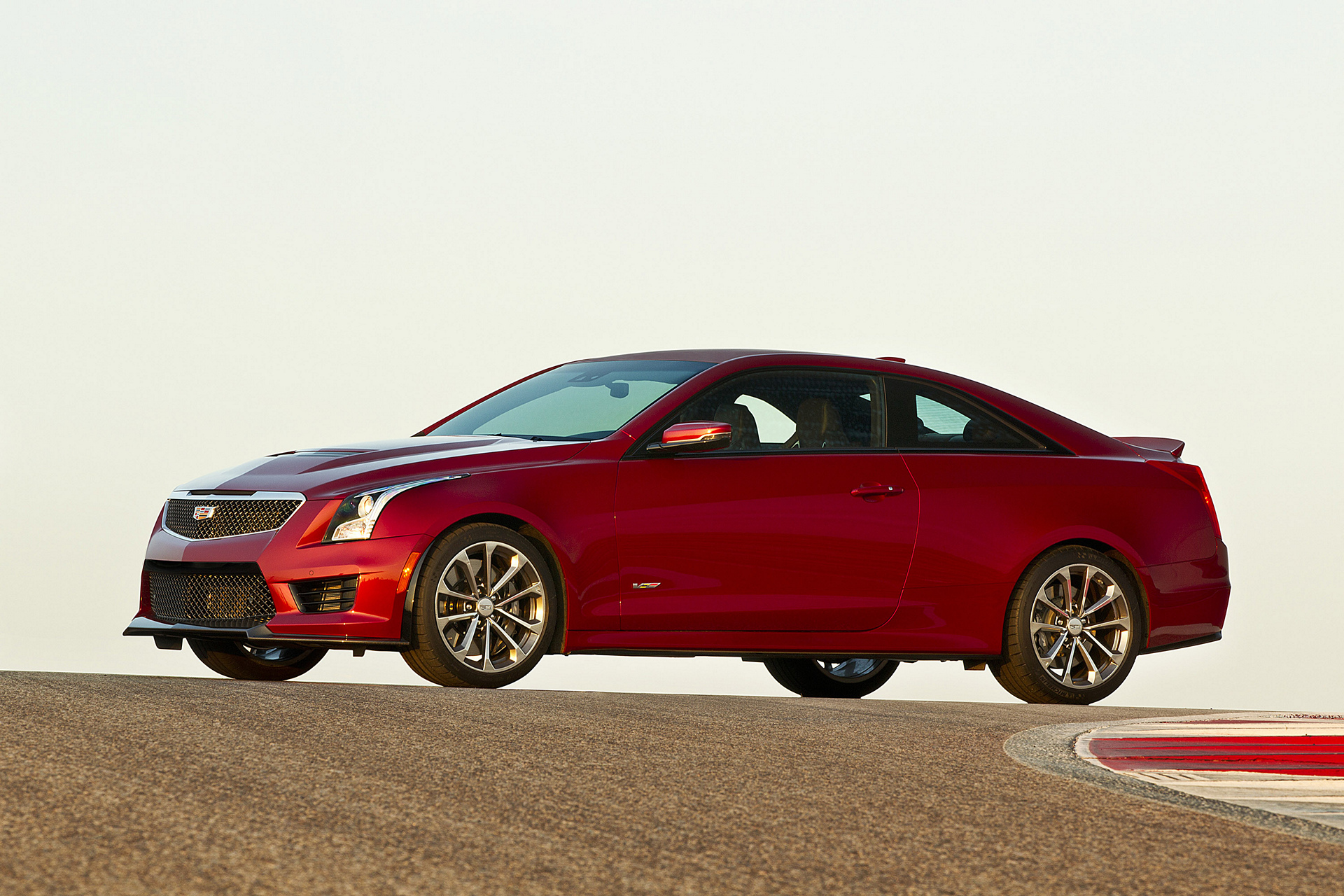 “Cadillac’s V-Series is the best example of Cadillac’s emerging product substance – and the purest expression of the passion at the core of the brand,” said Johan de Nysschen, Cadillac President. 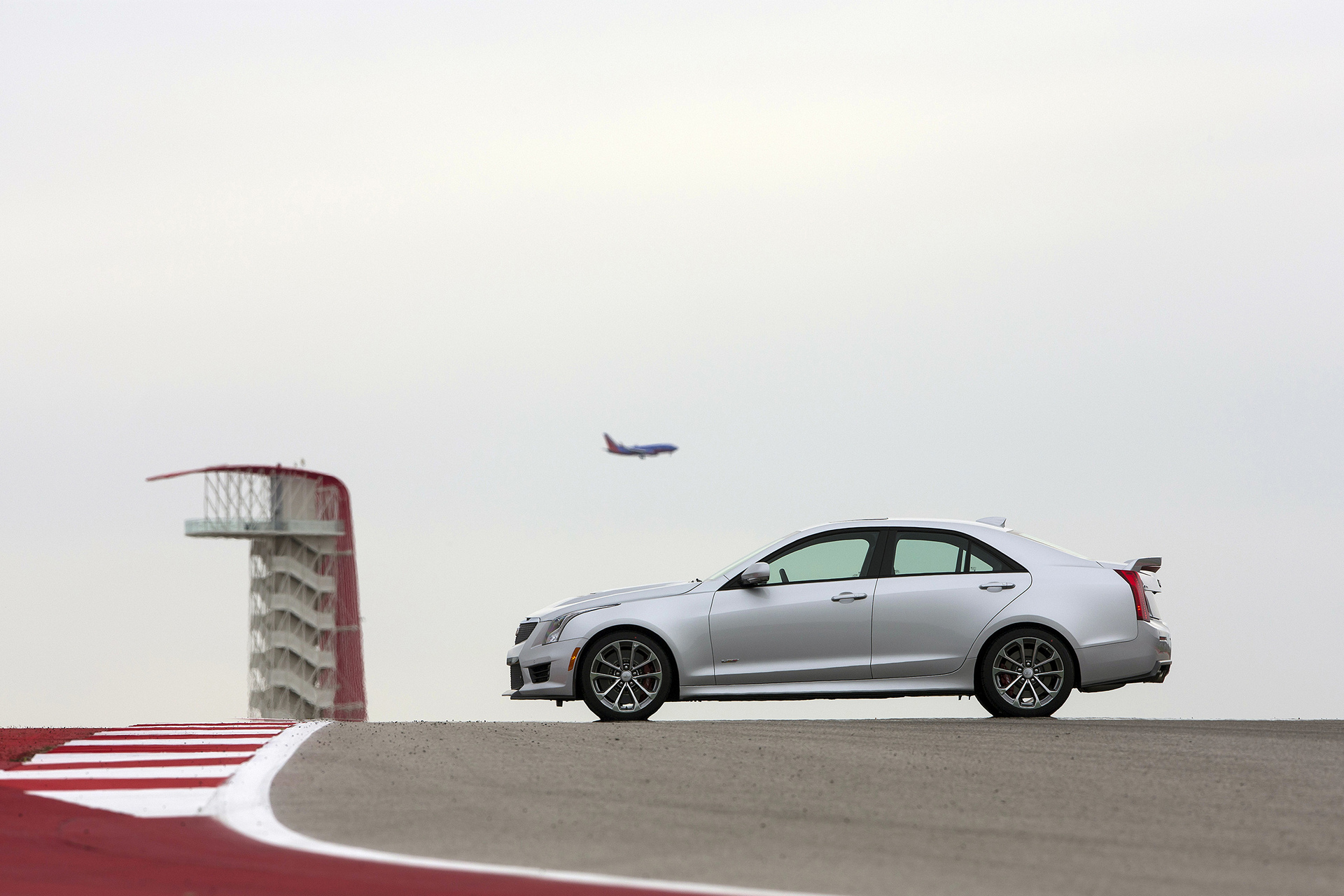 The ATS-V is powered by the first-ever twin-turbocharged engine in a V-Series. Rated at an SAE-certified 464 horsepower (346 kW) and 445 lb-ft of torque (601 Nm), the engine is the segment’s highest-output six-cylinder and enables 0-60 performance in 3.8 seconds and a top speed of 189 mph. It is backed by a six-speed manual – with Active Rev Match, no-lift shifting and launch control – or a paddle-shift eight-speed automatic transmission featuring launch control and Performance Algorithm Shift. 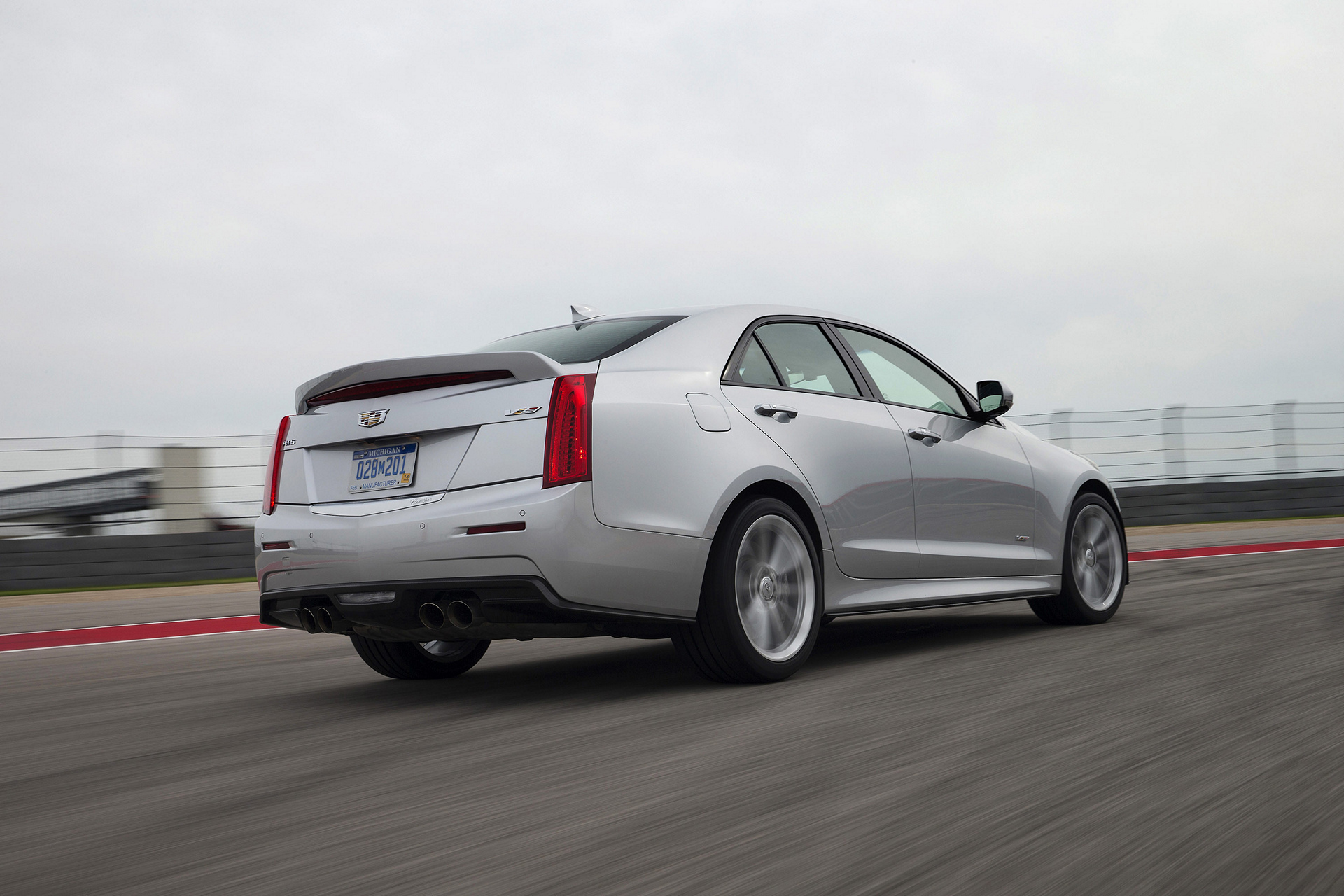 The Cadillac Twin Turbo engine supports comprehensively redesigned chassis, suspension and drivetrain systems developed to make the ATS-V one of the most agile, responsive and confident luxury performance cars on the market. Key performance technologies include: 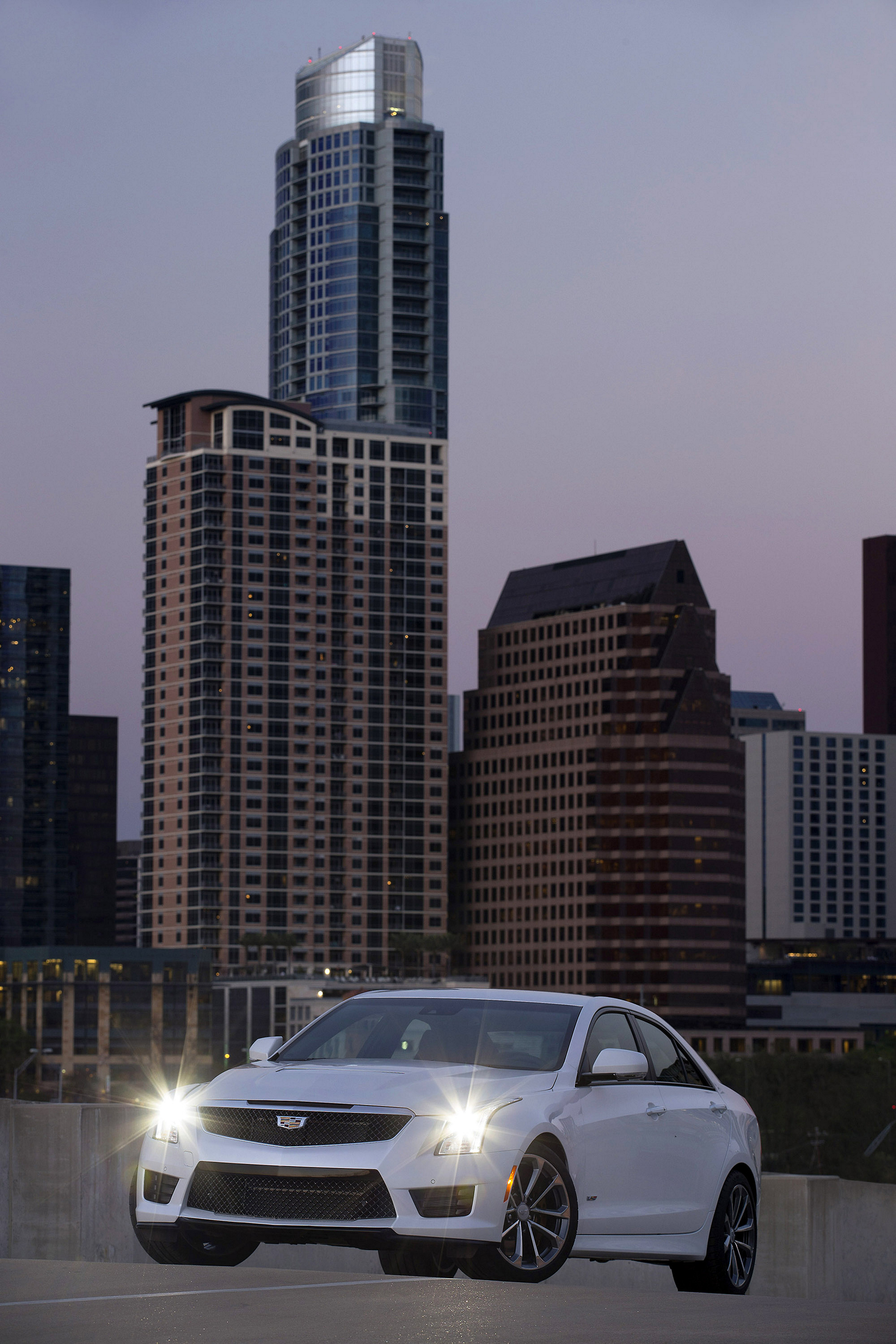 “As the smallest and lightest V-Series ever, the ATS-V forges a great connection with the driver, with exceptional nimbleness and responsiveness,” said David Leone, Cadillac executive chief engineer. “It’s adaptable to the driver’s preferences, with every selectable mode developed to deliver the best performance for all types of driving scenarios, including the track.”

A Performance Data Recorder onboard the ATS-V allows drivers to record high-definition video, with data overlays, of their driving experiences on and off the track, enabling sharing on social media. 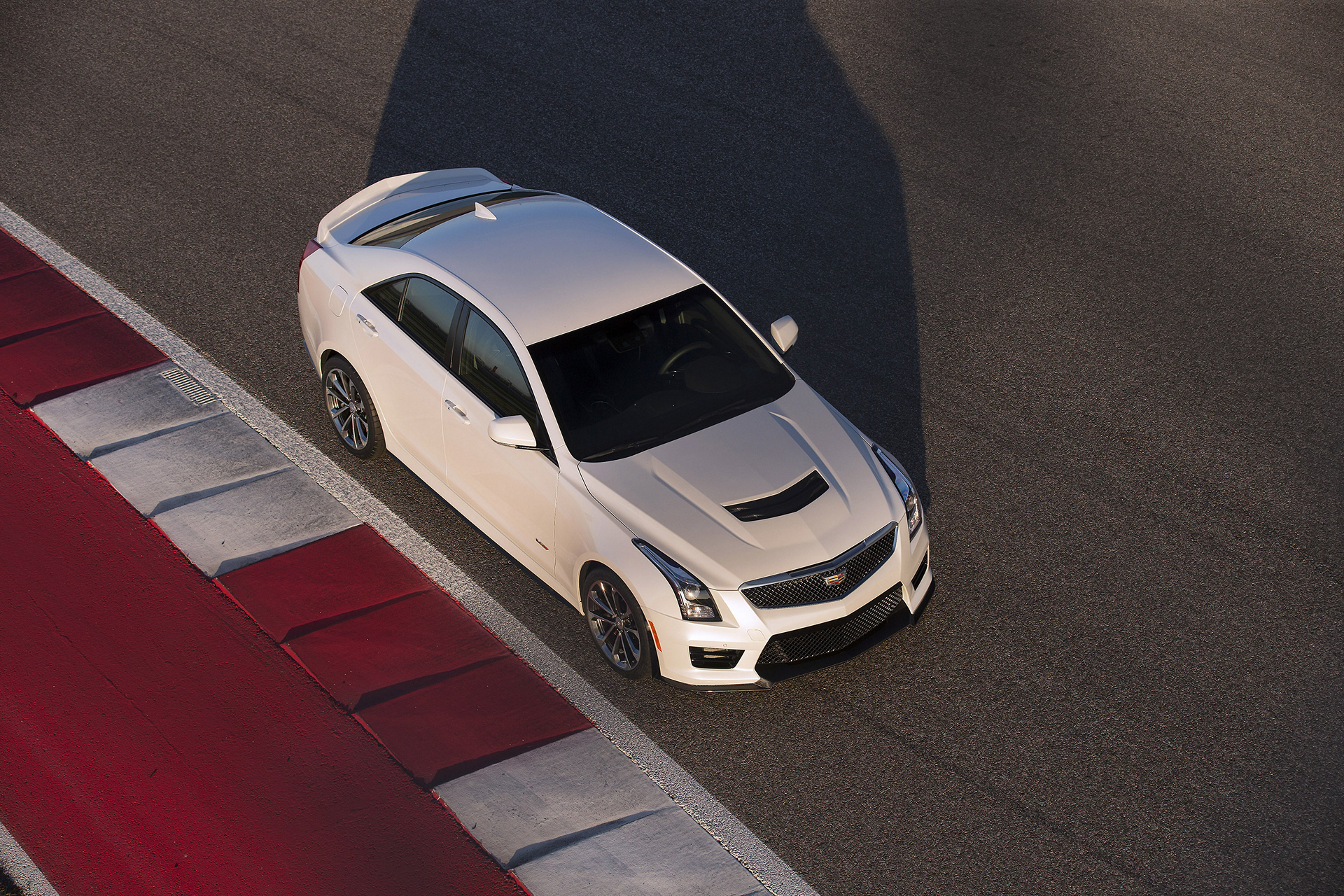 With a more powerful iteration of Cadillac’s Twin Turbo 3.6L V-6, the ATS-V represents the first twin-turbo powertrain in the history of the V-Series lineup. Exclusive features for the ATS-V version of the Twin Turbo are designed to make power faster and sustain it longer. Highlights include: 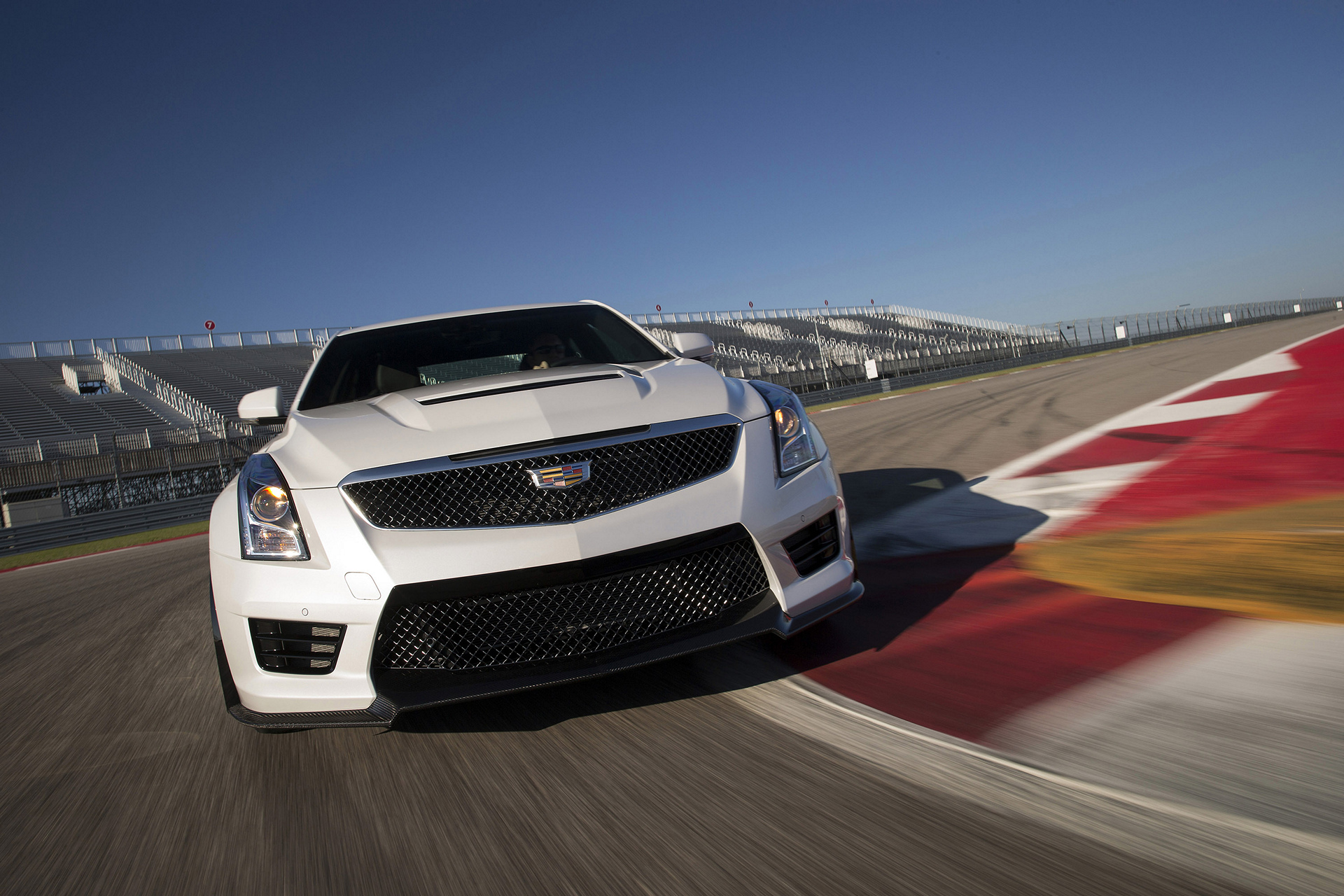 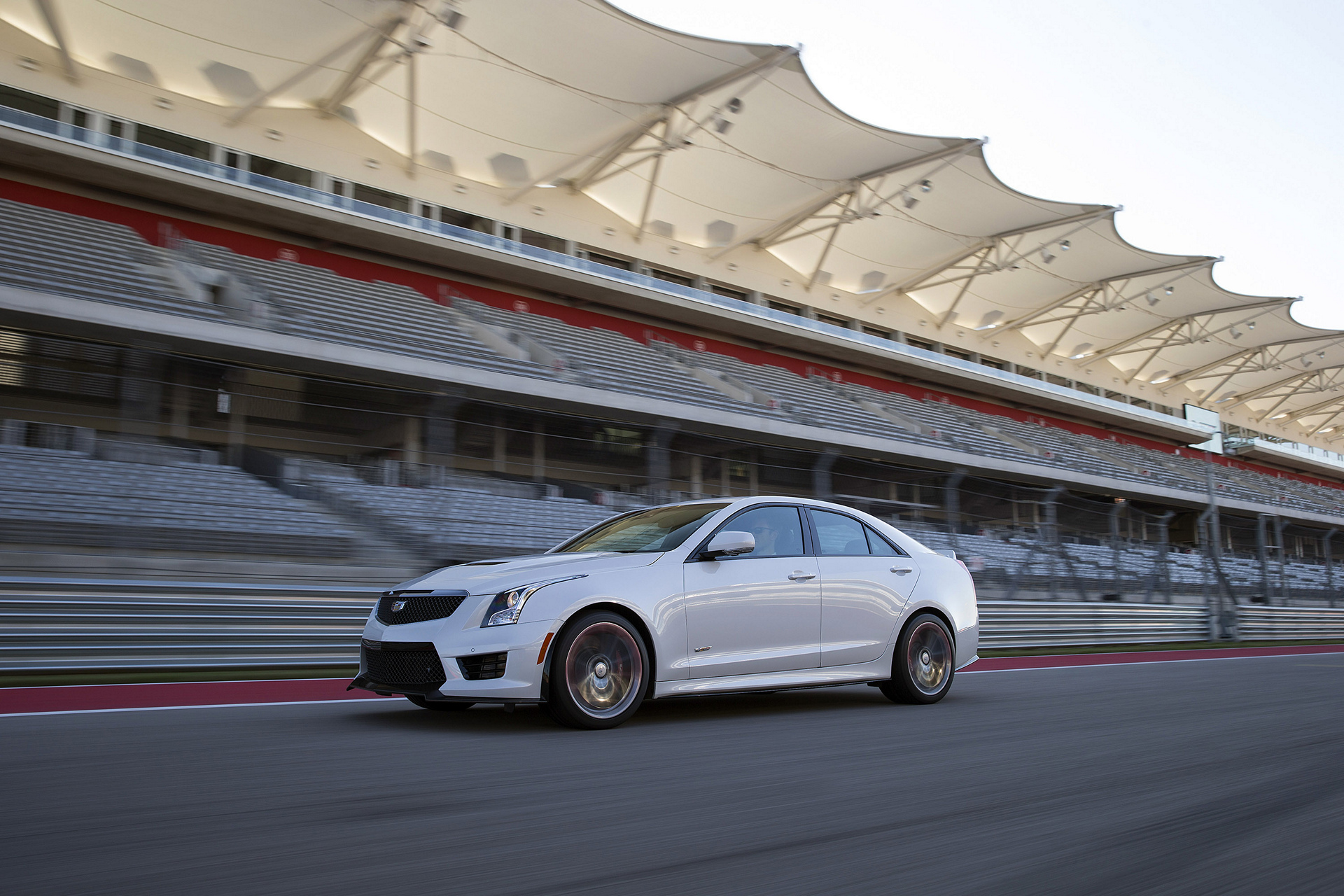 In practical terms, that means the relatively small size of the turbochargers and their lightweight turbines foster more immediate “spooling,” which virtually eliminates lag, for an immediate feeling of power delivery. They produce up to 18 pounds of boost (125 kPa). 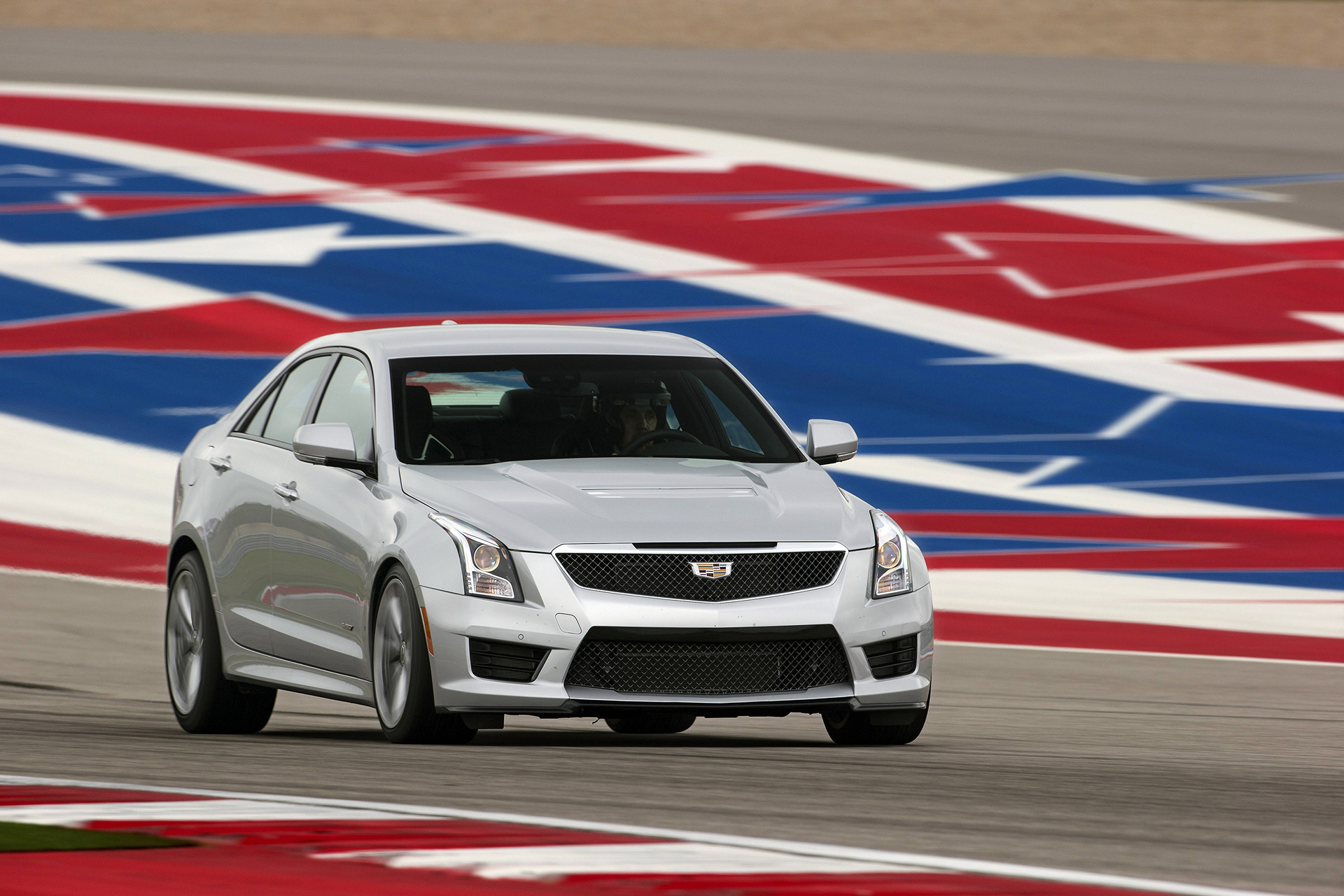 Unique vacuum-actuated wastegates – one per turbocharger – are used with the Twin Turbo for better management of the engine’s boost pressure and subsequent torque response for smoother, more consistent performance. They are independently controlled on each engine bank to balance the compressors’ output to achieve more precise boost pressure response.

The Cadillac Twin Turbo’s patented, manifold-integrated water-to-air charge cooling system also contributes to more immediate torque response, because the compressors blow through very short pipes up to the intercooler. With no circuitous heat-exchanger tubing, there is essentially no lag with the response of the turbochargers. In fact, airflow routing volume is reduced by 60 percent when compared with a conventional design that features a remotely mounted heat exchanger. 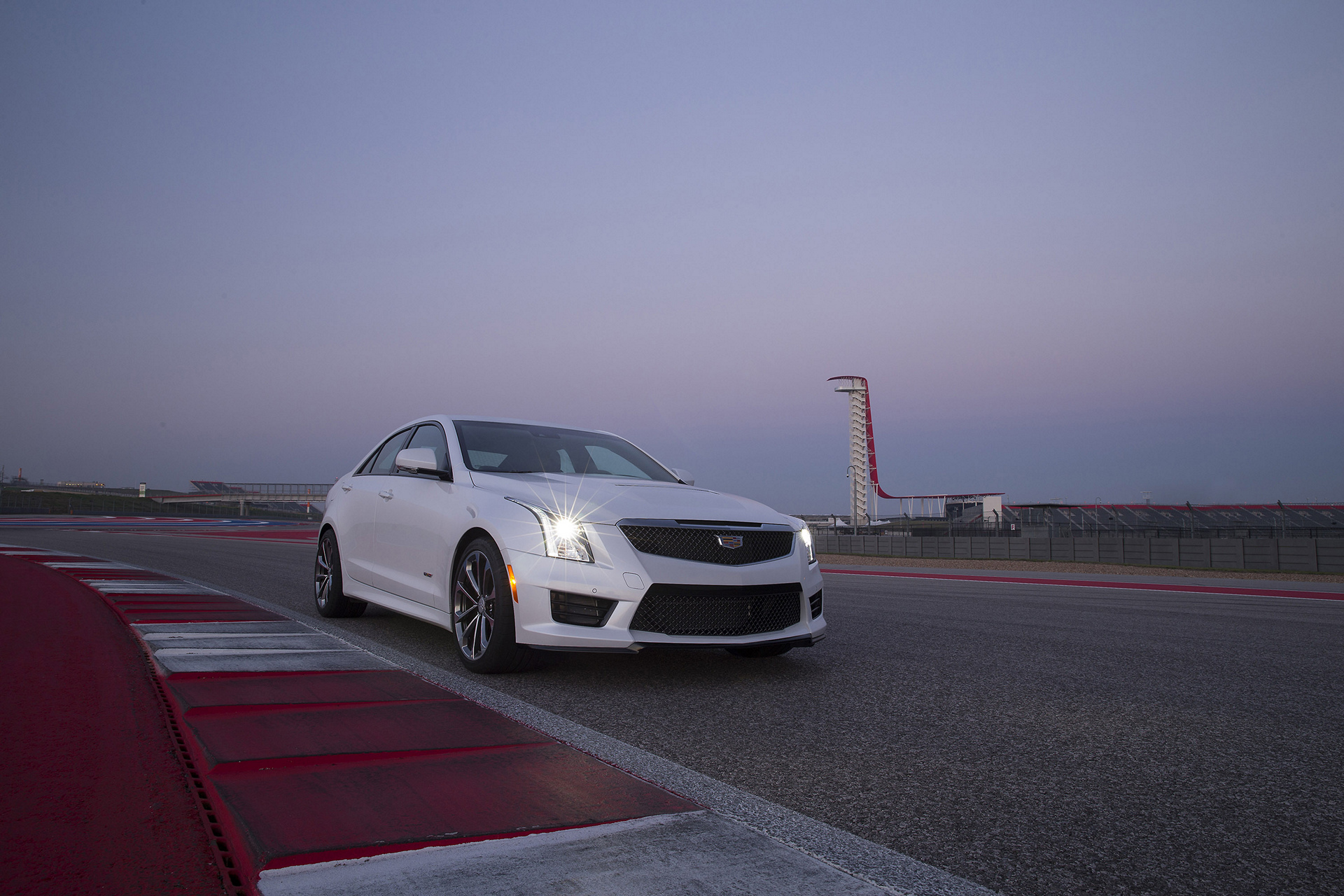 Additionally, unique cylinder heads feature a high-tumble intake port design that enhances the motion of the air charge for a more efficient burn when it is mixed with the direct-injected fuel and ignited in the combustion chamber. The topology of the pistons, which feature centrally located dishes to direct the fuel spray from the injectors, is an integral design element of the chamber design, as the piston heads become part of the combustion chamber with direct injection. 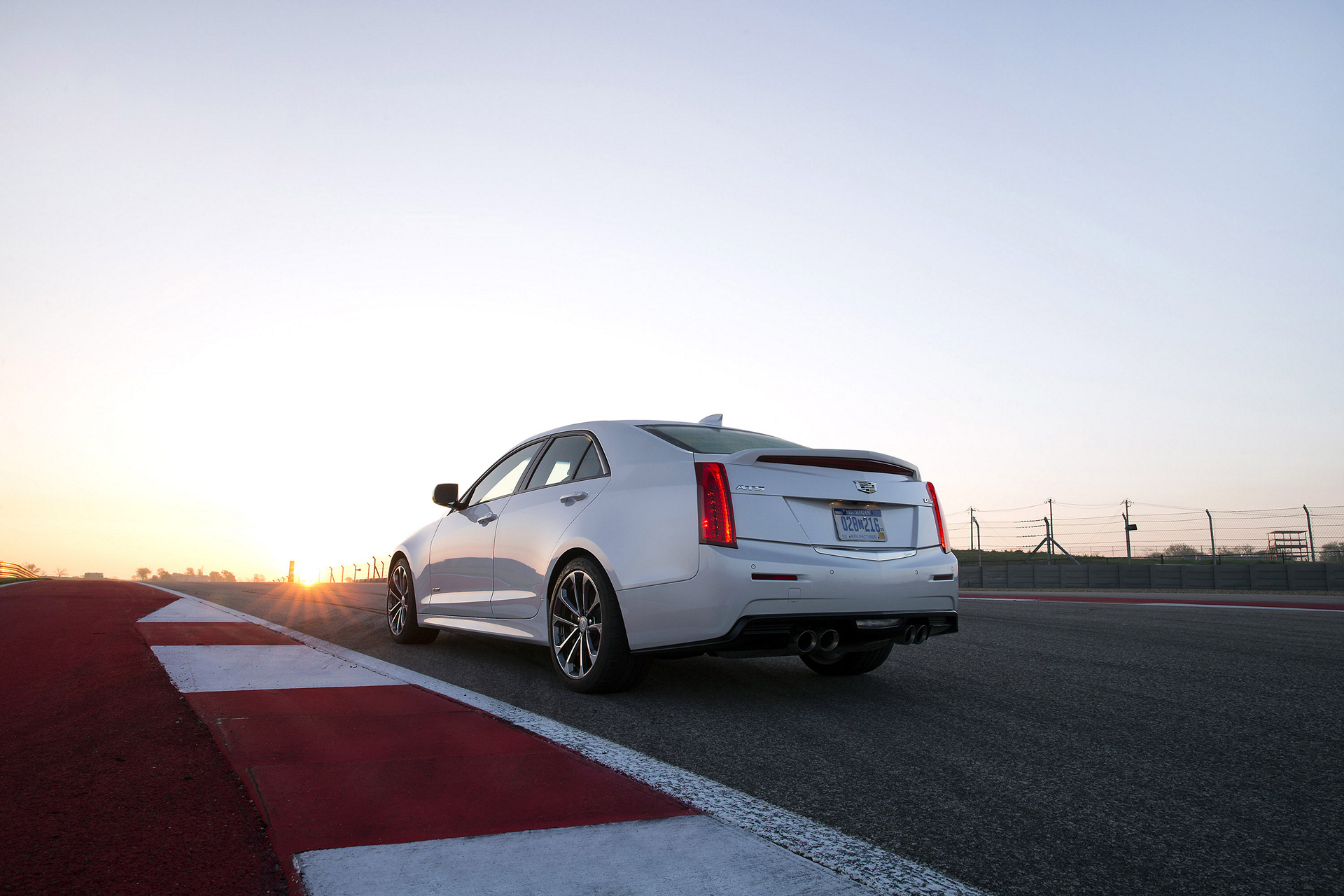 Large, 38.3-mm intake valves and 30.6-mm sodium-filled exhaust valves enable the engine to process tremendous airflow. In some conditions, the continuously variable valve timing system enables overlap conditions – when the intake and exhaust valves in a combustion chamber are briefly open at the same time – to promote airflow scavenging that helps spool the turbochargers quicker for faster boost production.

Hardened AR20 valve seat material on the exhaust side is used for its temperature robustness, while the heads are sealed to the block with multilayer-steel gaskets designed for the pressure of the turbocharging system. 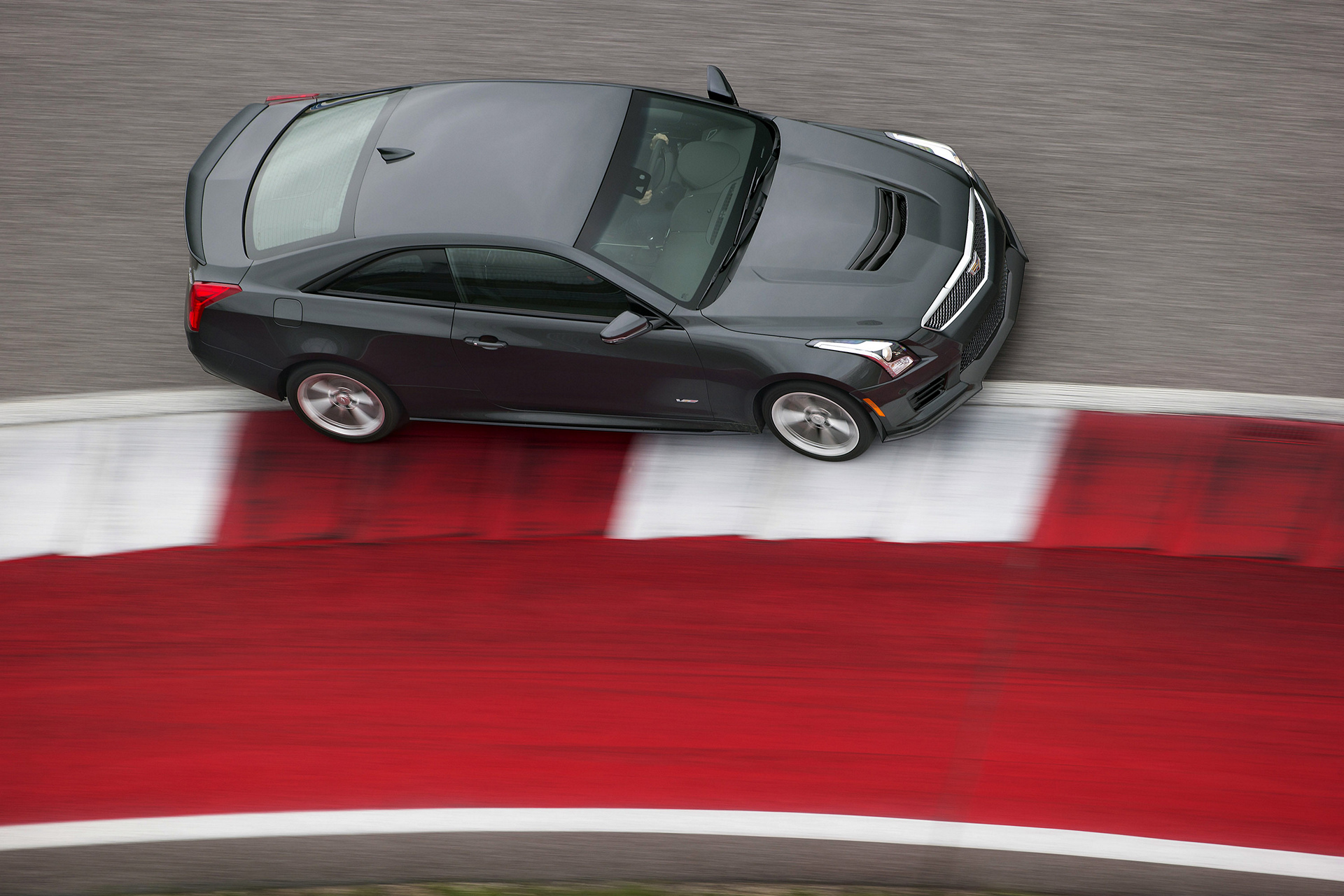 The standard TREMEC TR6060 six-speed manual transmission has a strong track record proven in the supercharged CTS-V series. It is updated for ATS-V with selectable technologies that enhance driver control to help produce optimized shifts that can lead to faster lap times: 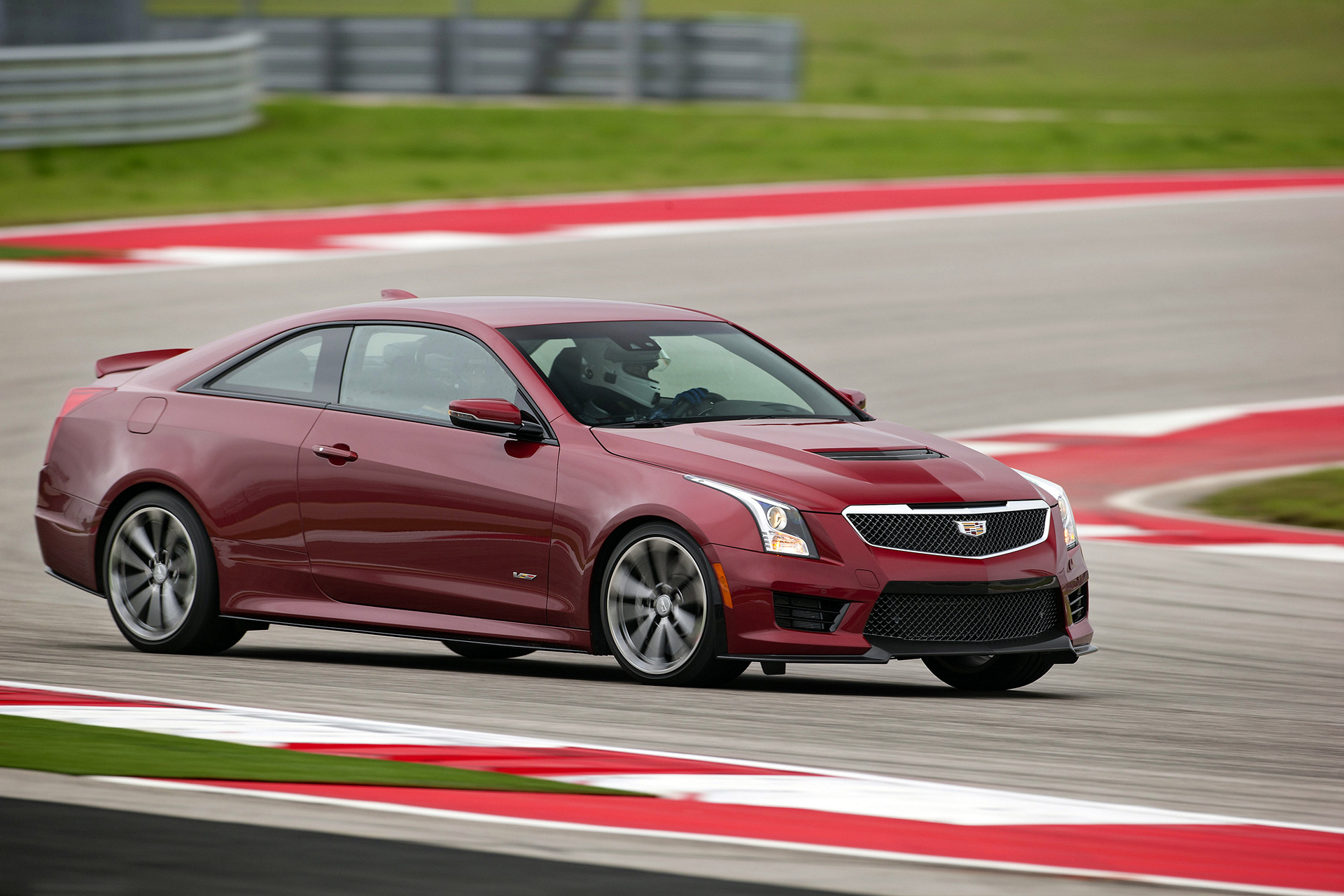 The TR6060 transmission is used with a dual-mass flywheel and dual-disc clutch, which deliver greater shift quality and feel through lower inertia.

The new Hydra-Matic 8L90 eight-speed paddle-shift automatic transmission is available in the ATS-V. Designed and built by GM, it delivers world-class shift times that rival the best dual-clutch designs.

For performance driving, the transmission offers full manual control via steering wheel paddles. A new transmission-control system and unique algorithms deliver shift performance that rivals the dual-clutch/semi-automatic transmissions found in many supercars – but with the smoothness and refinement that comes with a conventional automatic fitted with a torque converter. 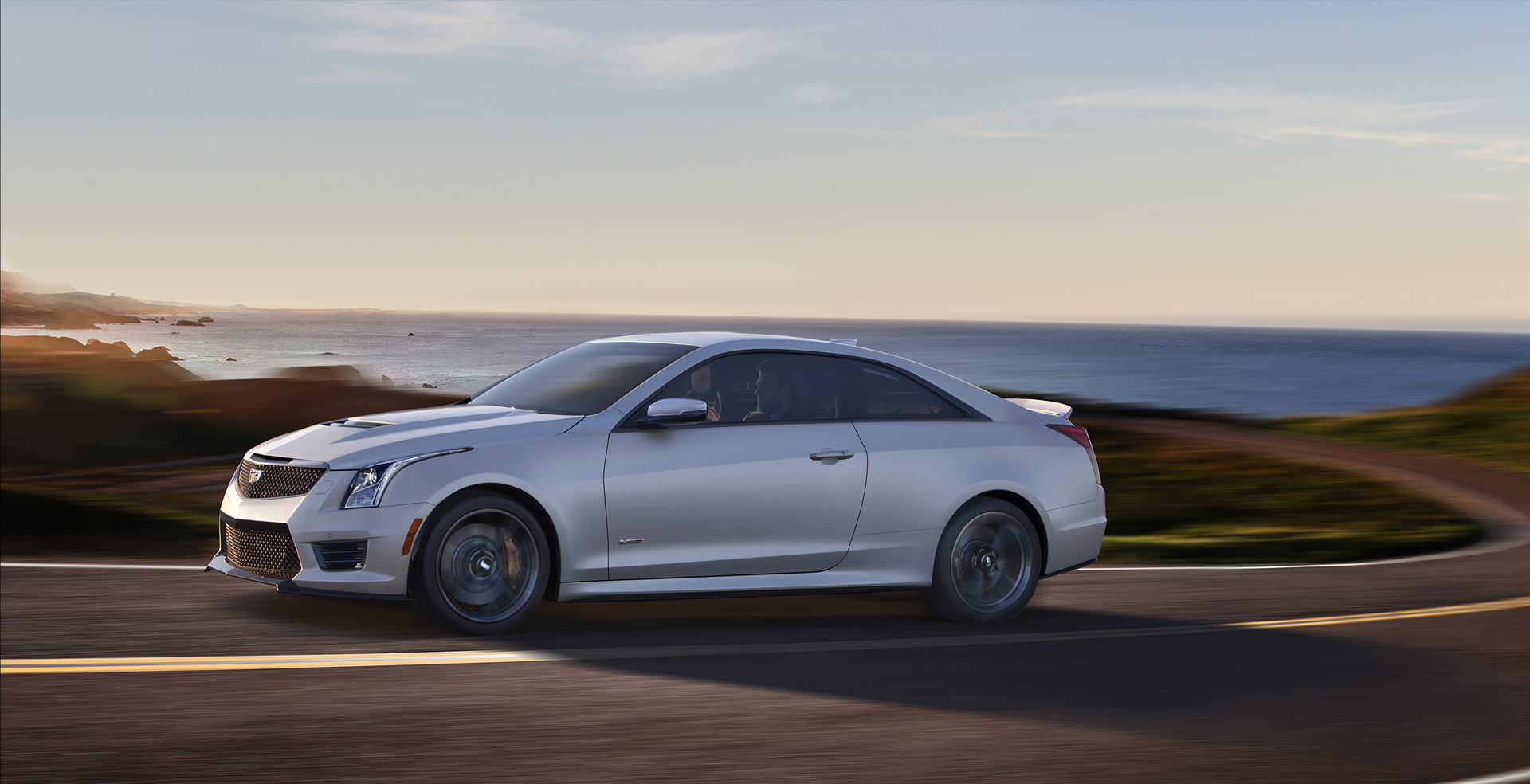 The transmission controller analyzes and executes commands 160 times per second. Wide-open throttle upshifts are executed up to eight-hundredths of a second quicker than those of the dual-clutch transmission offered in the Porsche 911. Additional performance-enhancing features include Performance Algorithm Shift and launch control via the Performance Traction Management system.

The underlying ATS structure is highly mass optimized and designed to meet higher performance requirements, with enhancements to the V-Series developed to respond to cornering and torque loads that go significantly beyond the levels experienced by the non-V models.

The new elements include: 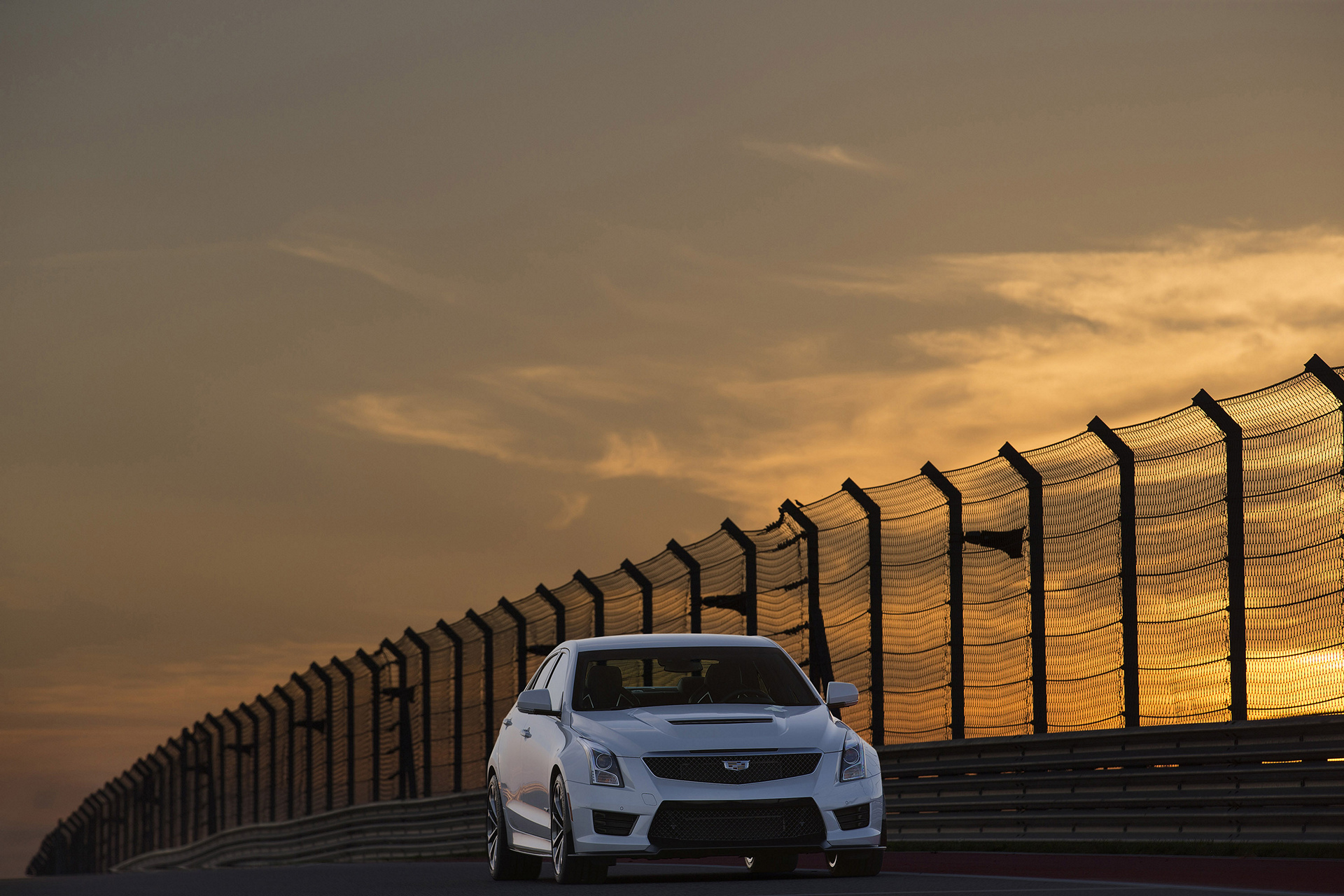 “The ATS-V feels like it was machined from billet steel,” said Tony Roma, chief engineer. “Along with supporting the higher performance capability of the car, the enhanced structure conveys confidence to the driver through a greater feeling of solidity and sharper, more precise responsiveness.” 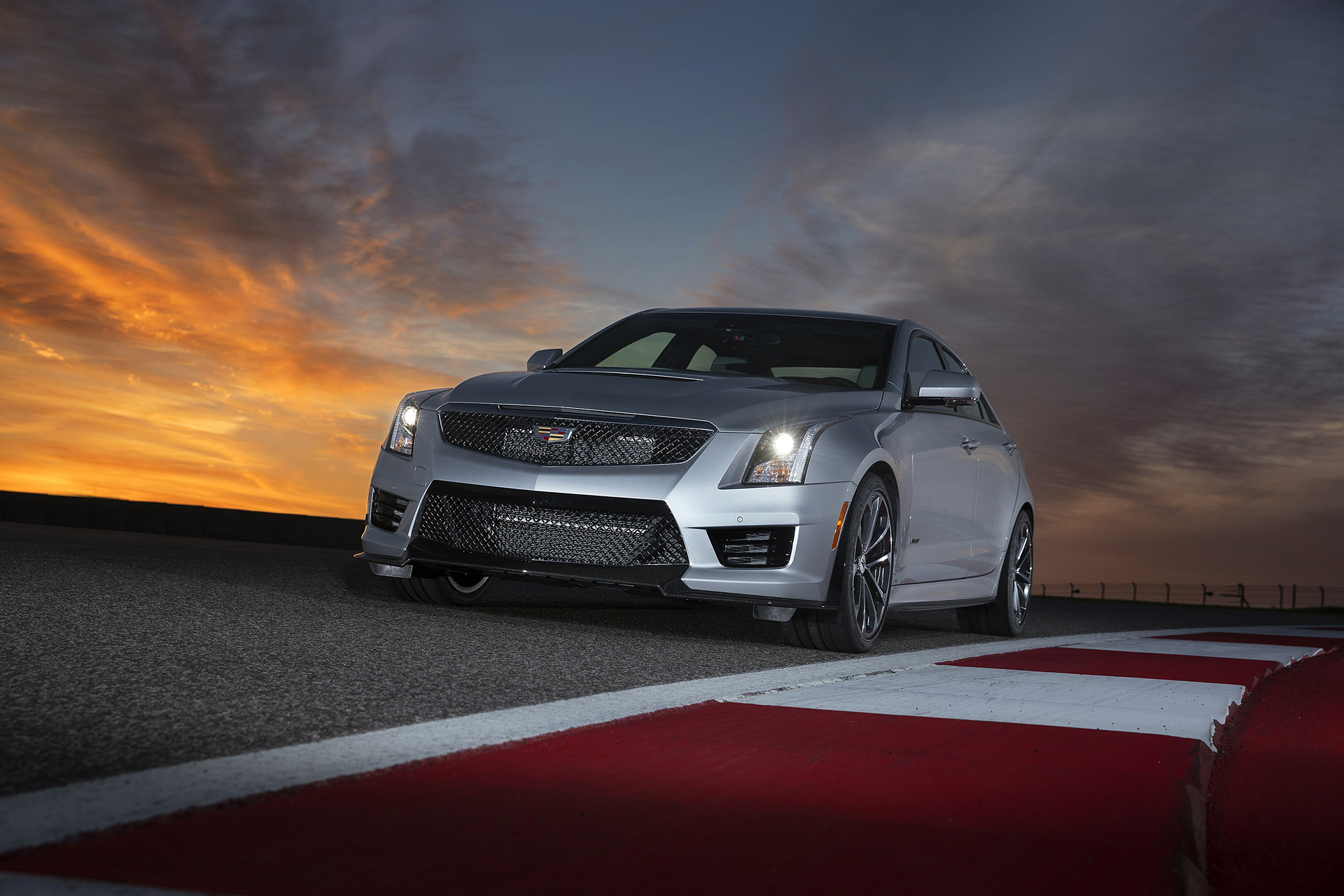 With the stronger body structure – and more than a decade of V-Series production models and the CTS-V racing program experience under their belts – engineers tuned the ATS-V to deliver greater body motion control for a more agile feel, while maintaining excellent ride quality.

“The result is class-leading capability on the highway or track, balanced with luxury and refinement,” said Roma. “In fact, the car is ready for the track right off the showroom floor, with no special modifications required.” 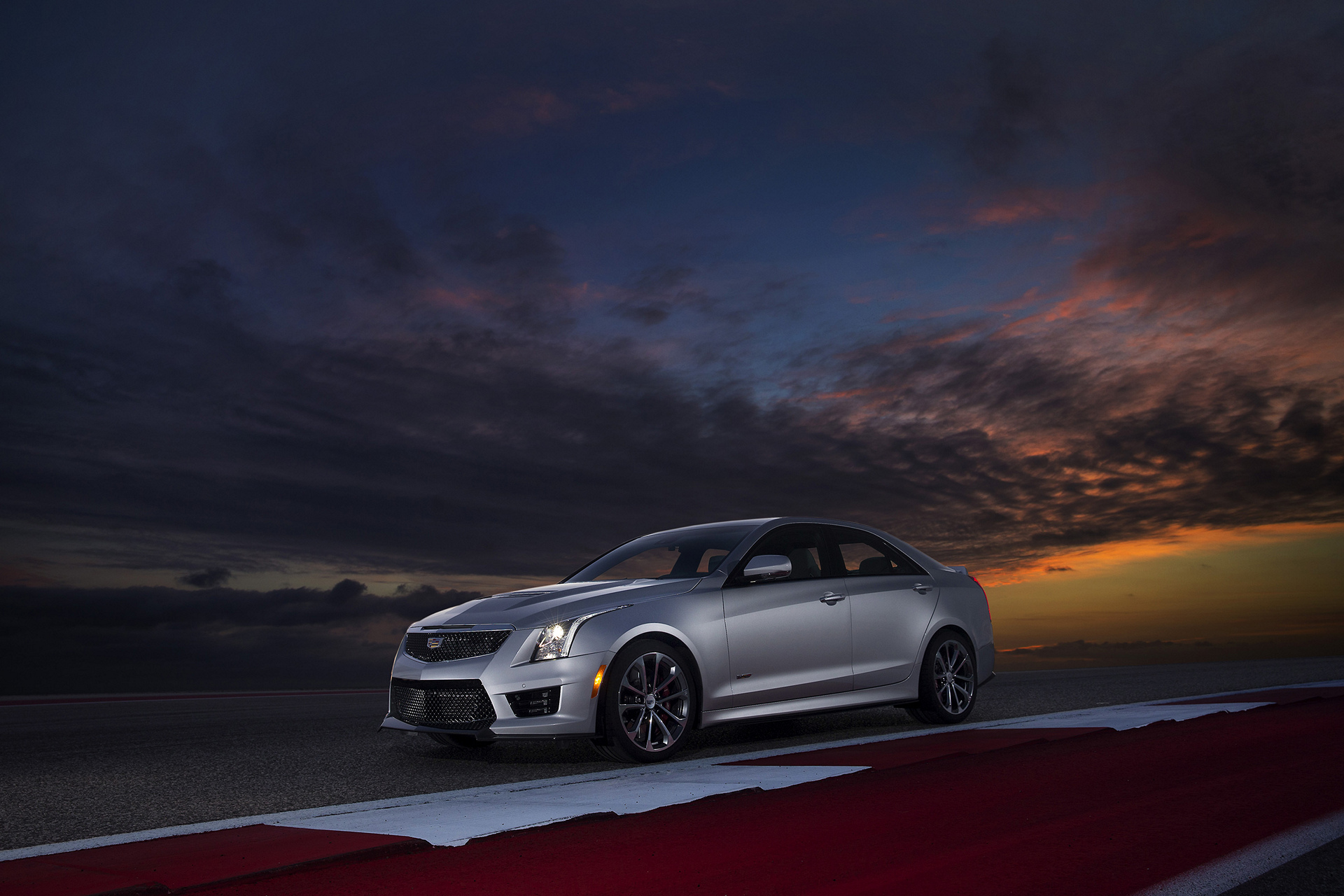 Additional contributors to the ATS-V’s dual-mode driving experience include:

Magnetic Ride Control “reads” the road a thousand times per second, sending data to magneto-rheological fluid-filled dampers that can independently control the damping characteristics of all four dampers. Third-generation improvements enable 40-percent faster damping response. In fact, at 60 mph, the third-generation magnetic ride control system calculates the optimal damping force for every inch of the road. 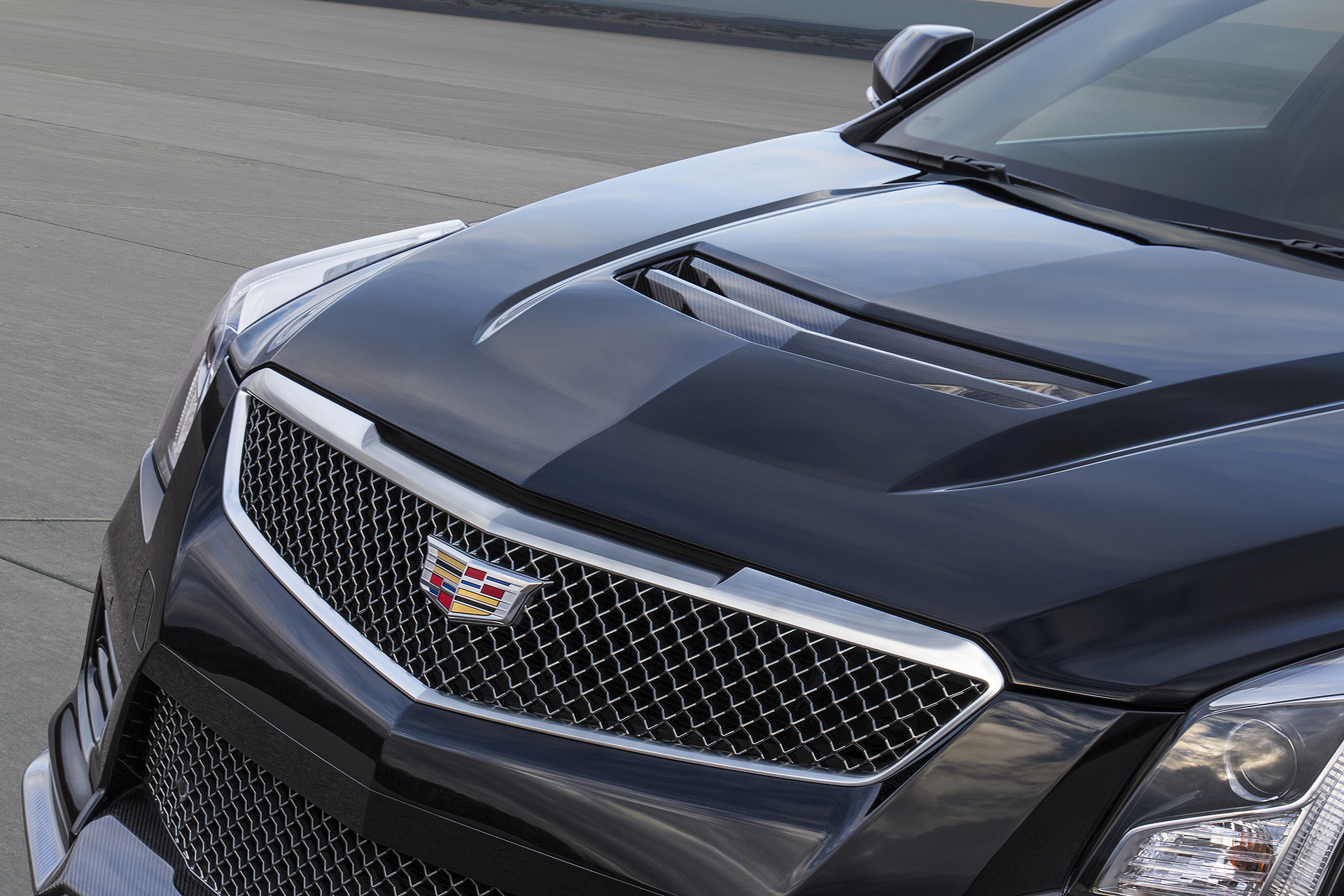 Almost every exterior panel on the ATS-V is unique, from the fascias and fenders, to the hood, rear spoiler and rocker moldings – and every one was designed to support the car’s capability.

“All of the design elements have a purpose,” said Andrew Smith, executive director, Cadillac Global Design. “They contribute to lift reduction, enhanced cooling, reduced mass or all of the above.”

The unique elements include: 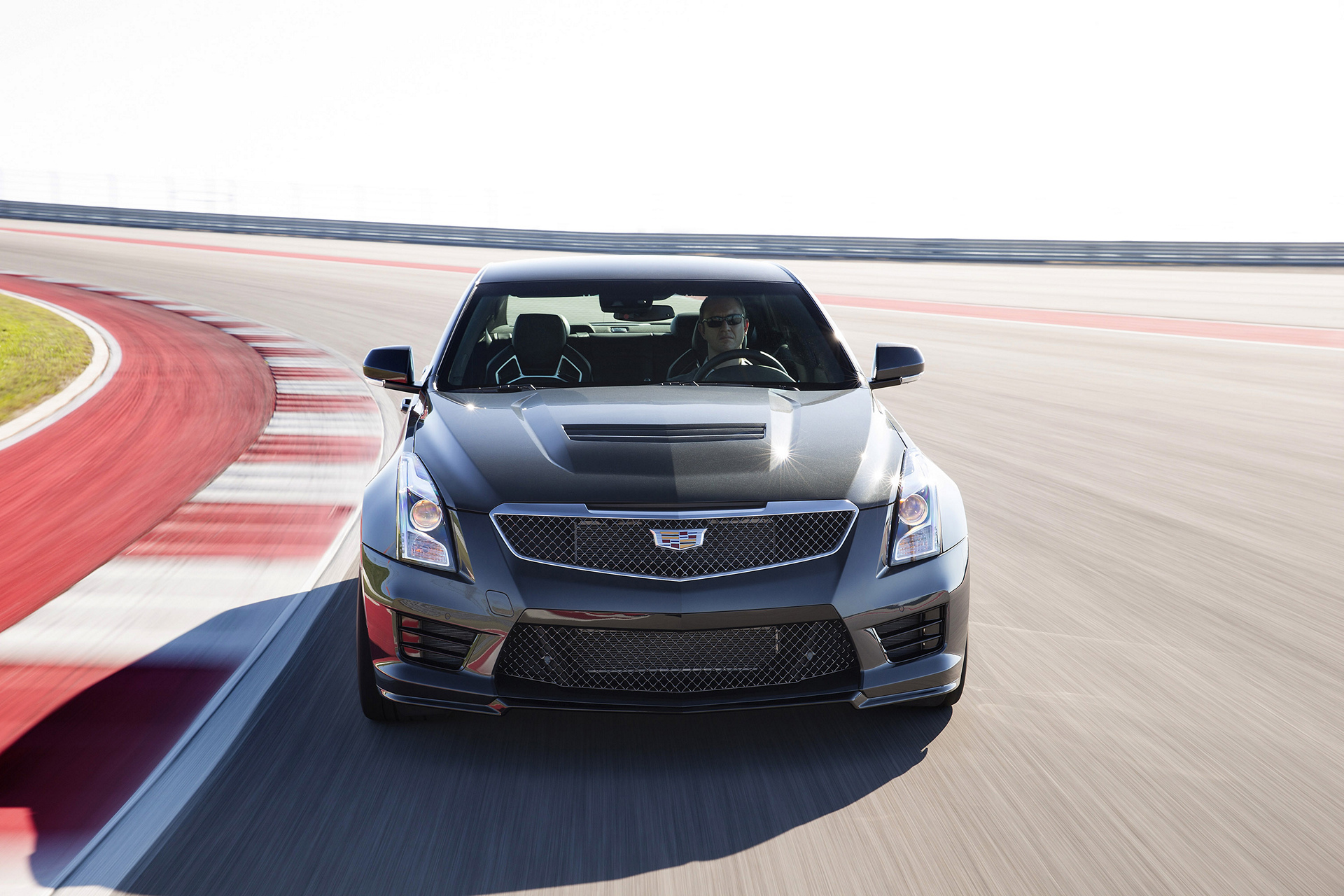 Available Carbon Fiber and Track packages take aero performance and mass optimization to higher levels. The Carbon Fiber package includes a more aggressive front splitter, hood vent trim and rear diffuser, along with composite rocker extensions and a taller, body-color rear spoiler. The Track package includes the components of the Carbon Fiber package, plus the Performance Data Recorder and a low-mass battery. It also deletes the standard floor mats and tire inflator kit to save weight. 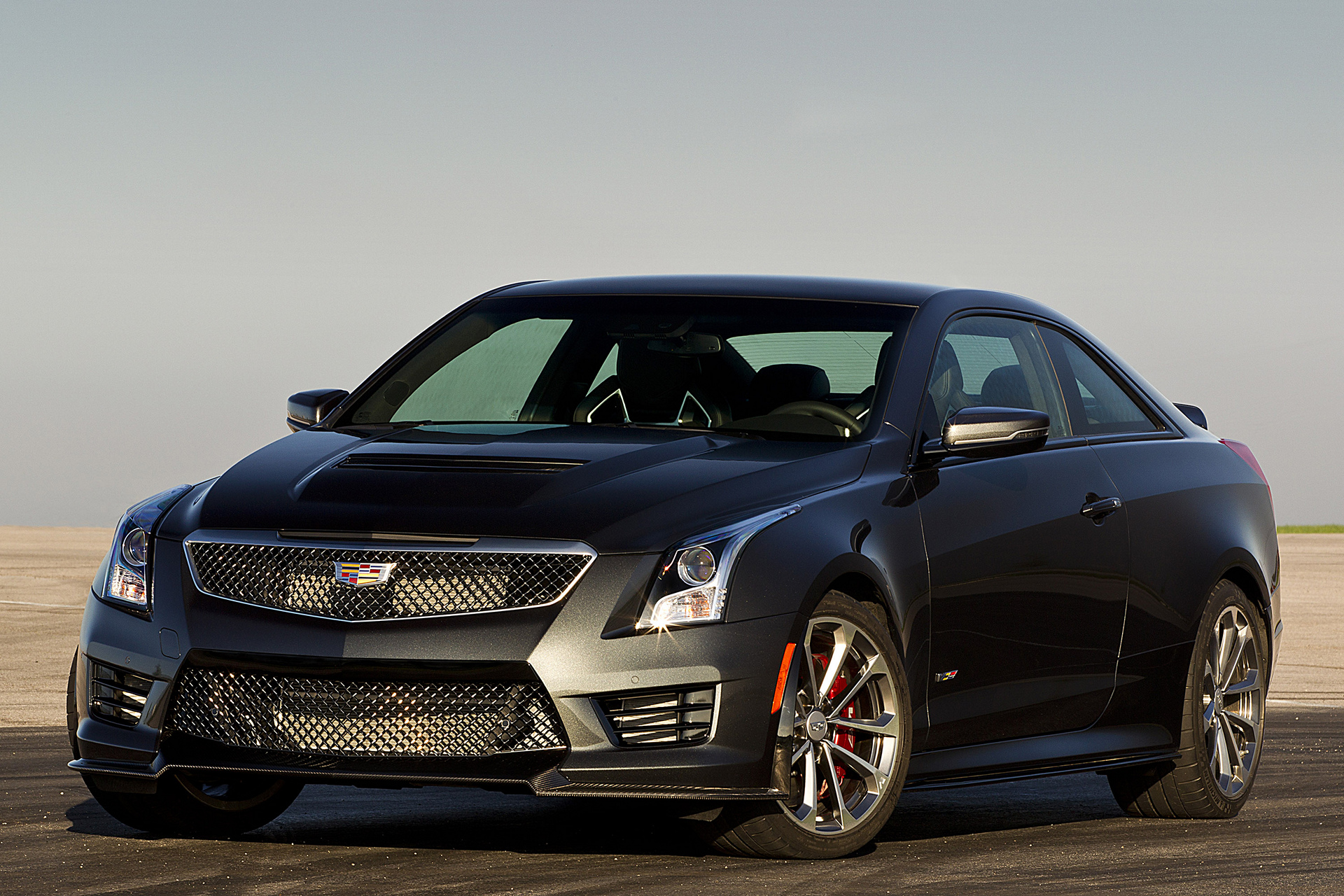 “V-Series is the emotive core of the Cadillac brand and the apex of the Art and Science design philosophy,” said Smith. “A car offering a bold sense of arrival, serious performance, seamless integration of technology, and precision craftsmanship. The exposed carbon fiber components, for example, are book-matched on the centerline for a more precise, tailored appearance.”

Also, the lightweight forged aluminum wheels and brake calipers are offered in three finishes, allowing owners to personalize the presence of the ATS-V. 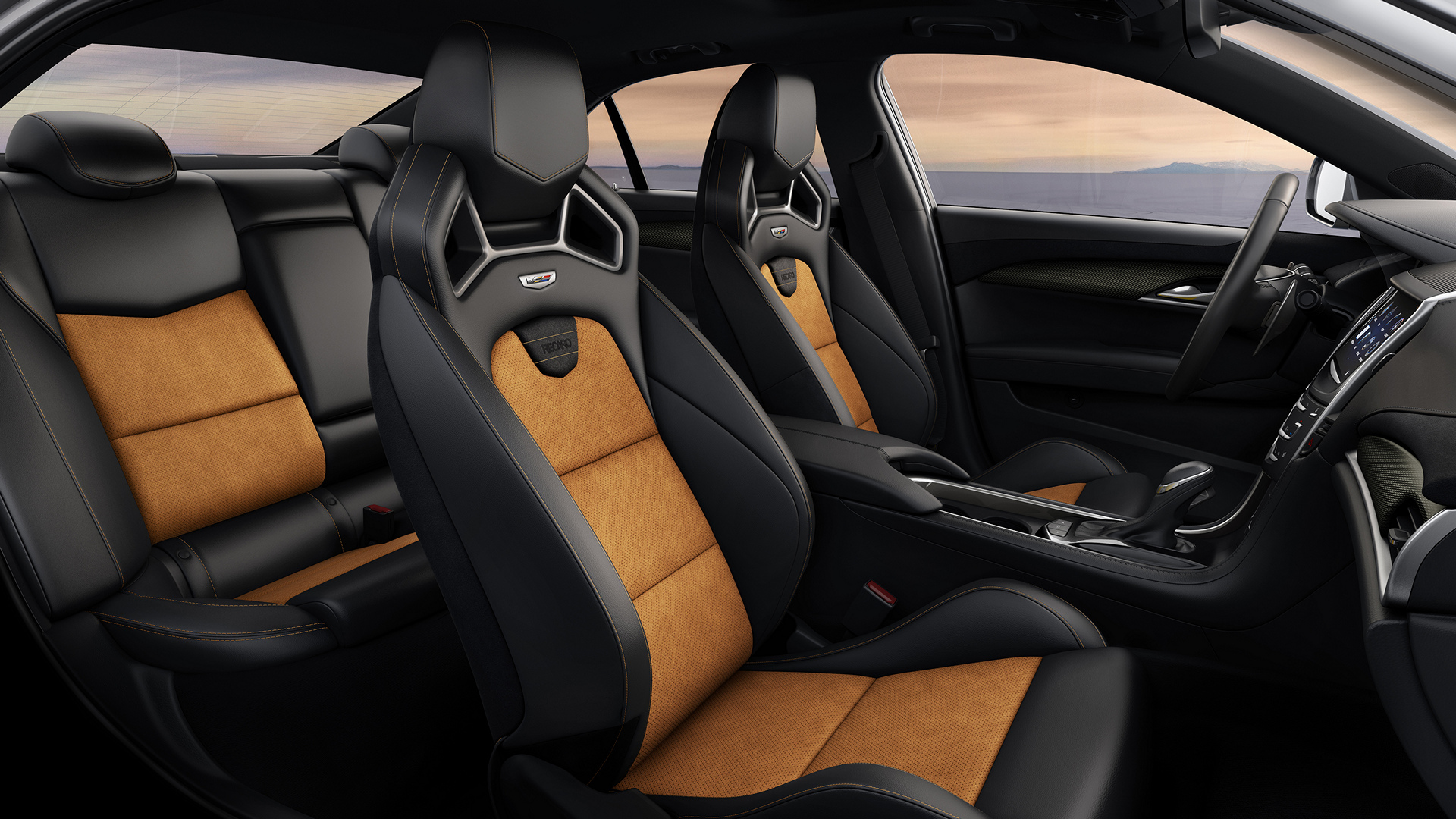 The aura of track-inspired precision carries over to the interior, where the design and relationship of key components are aimed squarely at performance-driving ergonomics.

“With the performance the new ATS-V is capable of delivering, the interior needs to be as functional as the other vehicles systems,” said Smith. “All of the contact points – the steering wheel, seats, shifter and pedals – are designed to make performance driving experiences direct and intuitive.” 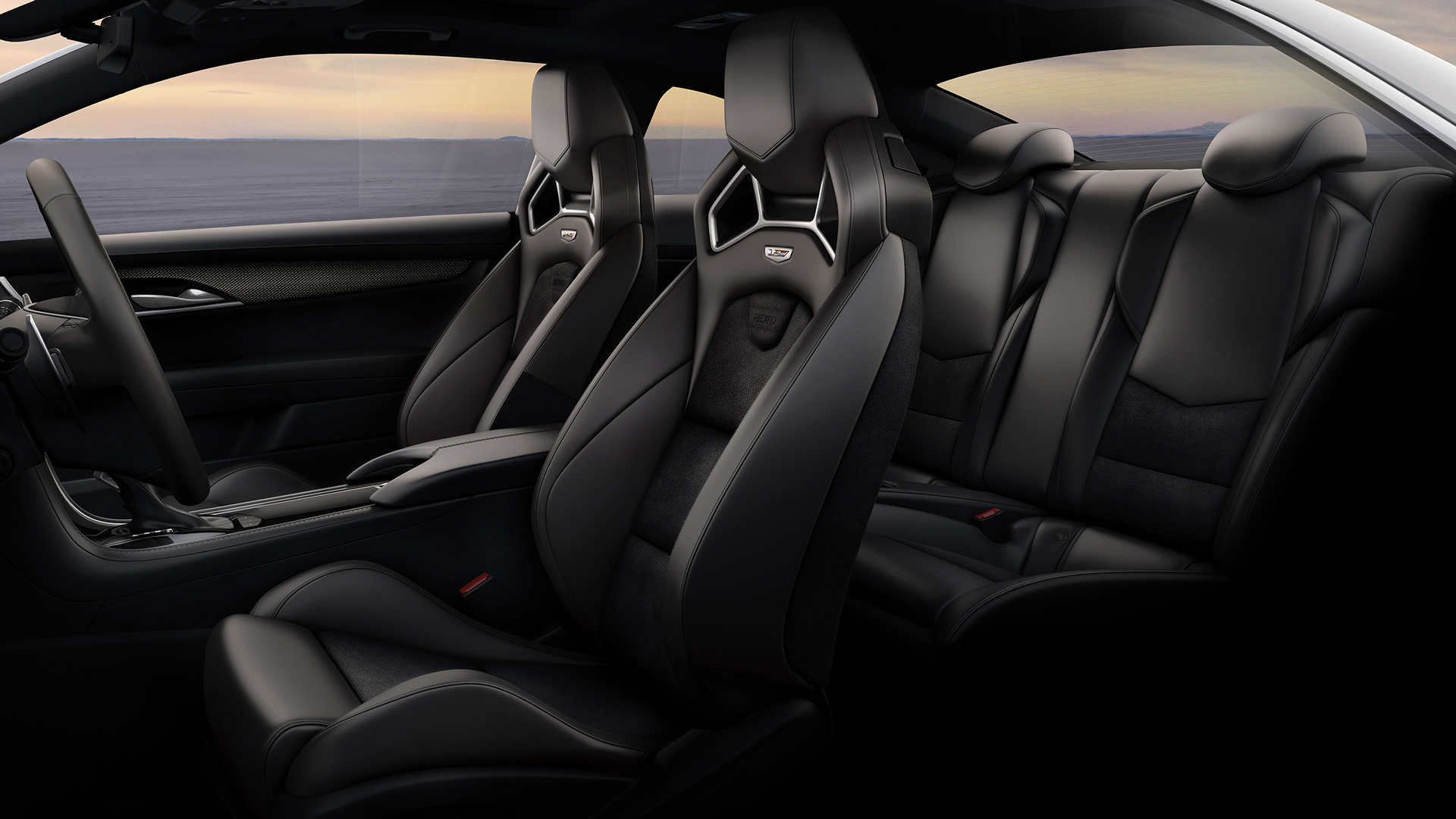 New, available 16-way-adjustable RECARO performance front seats are the lynchpins for the driving experience, with aggressive, adjustable bolsters that help hold the driver and front passenger in place during high-load cornering. They also have a luxury-performance feel, trimmed in Mulan leather with sueded microfiber inserts and seatbacks.

The ATS-V also features a unique version of the 5.7-inch, three-window instrument panel cluster display, with V-Series graphics and distinctive gauge readouts. It is also equipped with the latest connectivity technologies from Cadillac, including:

The Performance Data Recorder is controlled via CUE’s color touch screen and recordings can be reviewed on the screen when the vehicle is parked.
The 2016 Cadillac ATS-V also features the latest in phone integration technology through Apple Car Play, which allows smartphone users to connect with applications such as navigation, hands-free text messaging, entertainment and news directly through the CUE display screen.

Connectivity is simple as iPhone features (on iPhone 5 and later) are displayed on the screen and can be controlled by voice commands through a steering wheel button, helping drivers keep their eyes on the road and hands on the wheel.

Apple CarPlay takes the iPhone features most owners want to access while driving and puts them on the vehicle’s display to allow drivers to make calls, send and receive messages and listen to music right from the touchscreen or by voice via Siri. Apple CarPlay-supported apps include Phone, Messages, Maps, Music and compatible third-party apps. A full list of those apps can be found at Apple.com/ios/carplay.