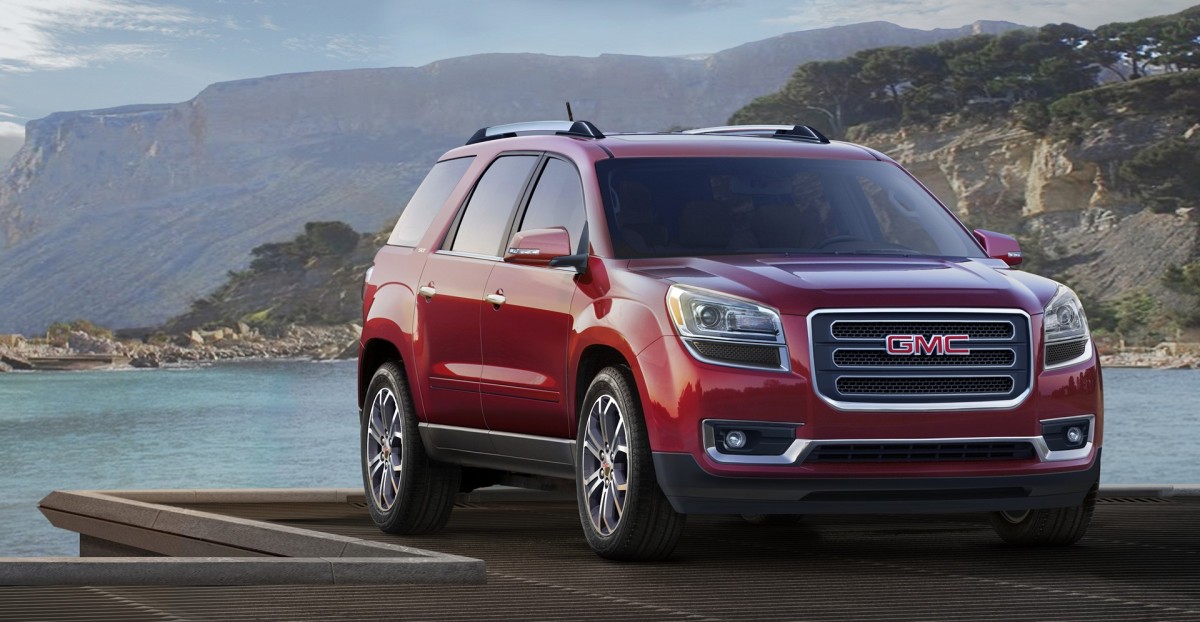 All models come with OnStar 4G LTE connectivity that includes a standard built-in Wi-Fi hotspot. The state-of-the-art technology provides a mobile hub for drivers and passengers to stay connected wherever and whenever they like with up to seven personal devices. The hotspot is on whenever the vehicle is on and comes with a three-month/three gigabyte data trial, after which there is an option to purchase additional data. The GMC Acadia provides comfort, style and safety combined with flexible space and cargo capacity. The Acadia Denali builds on those characteristics with even higher levels of luxury and design.

Acadia’s 2016 lineup includes a new SL base model, SLE (with SLE-1 and SLE-2 trims), the SLT (with SLT-1 and SLT-2 trims) and the Denali models, with seven- or eight-passenger configurations. A 3.6L V-6 VVT engine using gasoline direct injection technology powers all Acadia models, optimizing performance and fuel economy across the board. The engine is paired with Acadia’s fuel-saving six-speed automatic transmission to give FWD models an EPA-estimated 24 mpg on the highway. The transmission controls provide quick and consistent shifts for a commanding feel behind the wheel. All-wheel drive is available. Towing capability for the Acadia is 5,200 pounds (2,364 kg), when properly equipped.

Acadia’s interior functionality is popular with families, particularly the SmartSlide seating system, which provides easy access to the third row for seven- and eight-passenger seating configurations. Additionally, the second and third row still fold flat for class-leading maximum cargo space, including the ability to carry 48-inch-wide sheet goods, such as drywall and plywood.

The Acadia Denali, available in front-wheel-drive and all-wheel-drive models with seven- and eight-passenger seating configurations, continues to exude luxury. With signature design cues such as a monochromatic exterior highlighted with chrome accents, the Denali provides a premium ride through its many high-end details. Standard comfort and safety features continue to inspire drivers on the inside, too, with interior features such as perforated leather seating and a new heated leather-wrapped steering wheel. Denali-specific aluminum trim and accent lighting in the footwells and sill plates add to the interior ambience, while heated and cooled seats provide an extra level of relaxation. Advancements in technology are everywhere in the Denali, including the Color Touch navigation system, which allows drivers to use a wide range of functions from a touch screen infotainment center – including music, maps, Bluetooth, weather and more. When it comes to safety, the Acadia Denali ranks high with the Side Blind Zone and Rear Cross Traffic Alert, a radar system that helps detect things drivers might not see in a blind zone behind the vehicle. Also standard on Denali models – and all Acadia models – is hill-hold assist braking technology, which applies the brakes for 1.5 seconds when the driver’s foot leaves the brake pedal on inclines of 5 percent or steeper. To avoid unintended acceleration, an enhanced electronic pedal override reduces power to the engine when the brake and accelerator pedals are depressed at the same time.

Acadia Denali also features an exclusive interior acoustic package that makes it the quietest model in the Acadia lineup.

Distinctive lines and a sculpted body give the Acadia a refined appearance. From the three-bar grille and the standard diffused LED running lamps in the front to the rear spoiler, Acadia’s appeal is all in the details. Offered with 18-, 19- and 20-inch wheel designs that complement its confident lines and stance, Acadia is both stylish and functional. Vehicle entry and exit is easy with a body-frame integral structure that enables lower entry/exit height for passengers. The front door step-in height is only 18.9 inches (480 mm), and the rear door step-in height is 19.8 inches (503 mm). Entry to the second- and third-row seats is easy with very wide rear doors and GM’s exclusive Smart Slide second-row seat feature. Other exterior features include: Adding to the interior’s comfort is a car-like “low and away” instrument panel that exudes roominess and control. The instrument panel and other interior elements feature high-quality, low-gloss materials and tight gap tolerances. GM’s exclusive Smart Slide feature is standard, allowing quick and easy access to the third-row seating area. The second-row seat cushion flips up while the seatback slides forward, effectively compressing the space occupied by the seat with the pull of a lever. The Smart Slide system also allows the second row to be positioned fore/aft. When adjusted rearward, the second-row seat provides more legroom for taller passengers. When adjusted forward, it provides more storage space or additional legroom for third-row passengers. Storage space of 24.1 cu. ft. (682 liters) is available behind the third-row seat (with the cargo management system removed). Maximum available storage capability behind the first row of seats is 116.1 cu. ft. (3,288 L). A USB port in the lower area of the center stack on the instrument panel allows passengers to easily plug in their own media devices to play through the radio. Additional technology features include text message support, which alerts the driver to new messages for review and response (functionality depends on the smartphone), and XM Tune Select, which enables the user to create alerts for favorite songs or artists (available only with Navigation models).

Acadia’s audio system features a photo viewer and a standard rear-vision camera with dynamic guide lines that will display on the high-definition screen. The Acadia features a 3.6L engine with direct injection technology that helps produce power similar to many V-8 engines with the use of regular unleaded gasoline. In the Acadia Denali, it is rated at 288 horsepower (215 kW) and 270 lb-ft of torque (366 Nm), with 90 percent of the engine’s peak torque available from approximately 2,500 rpm to more than 6,000 rpm.

An available intelligent all-wheel-drive (AWD) system provides increased traction on slippery roads by actively managing the torque distribution between the front and rear axles, based on factors such as wheel speed, throttle and surface conditions. There is no driver intervention, as the system automatically decides how much torque to apply and delivers it to the wheels with the best traction.

Acadia continues to offer premium safety features, including Forward Collision Alert and Lane Departure Warning, which are standard on Denali and available on SLT-1 and SLT-2 models. The crash-avoidance systems employ a high-resolution camera mounted on the windshield to determine if the driver is too close to vehicles ahead. Visual signals and audible alerts warn the driver of a possible collision. Sensors also can detect if the vehicle is changing lanes without a turn signal to give the driver time to correct.

Side Blind Zone Alert and Cross Traffic Alert are standard on Acadia Denali and SLT-2, and available on SLT-1. They match smart engineering with driver-centric safety, using radar to help watch where drivers might not see. When a vehicle enters the blind zone or backs up into cross-traffic, the systems warn of a possible collision.

The front center air bag is part of a 360-degree safety system that helps protect passengers before, during and after a crash, including anchor pretensioners for outboard occupants and pelvic-thorax seat-mounted side air bags. The structure is reinforced in numerous areas with high-strength steel, including a stiff steel cross-car beam welded across the floor between the B-pillars.

It also uses dual-phase steel in select areas, such as the lower engine compartment rails. Dual-phase steel is strengthened in the paint oven and offers easier formability, reduced mass, greater strength and better crash energy absorption than most high-strength steels.

In addition to the new OnStar 4G LTE with standard built-in Wi-Fi hotspot that boosts Acadia’s connectivity, six months of OnStar Guidance service is standard on all models. OnStar is the global leading provider of connected safety, security and mobility solutions and advanced information technology.

OnStar’s RemoteLink Mobile App allows smartphone users to control vehicle functions, access vehicle information and send directions directly to the vehicle. An opt-in service called FamilyLink allows subscribers to stay connected to loved ones by checking the location of their vehicle online or by signing up for vehicle location alerts.