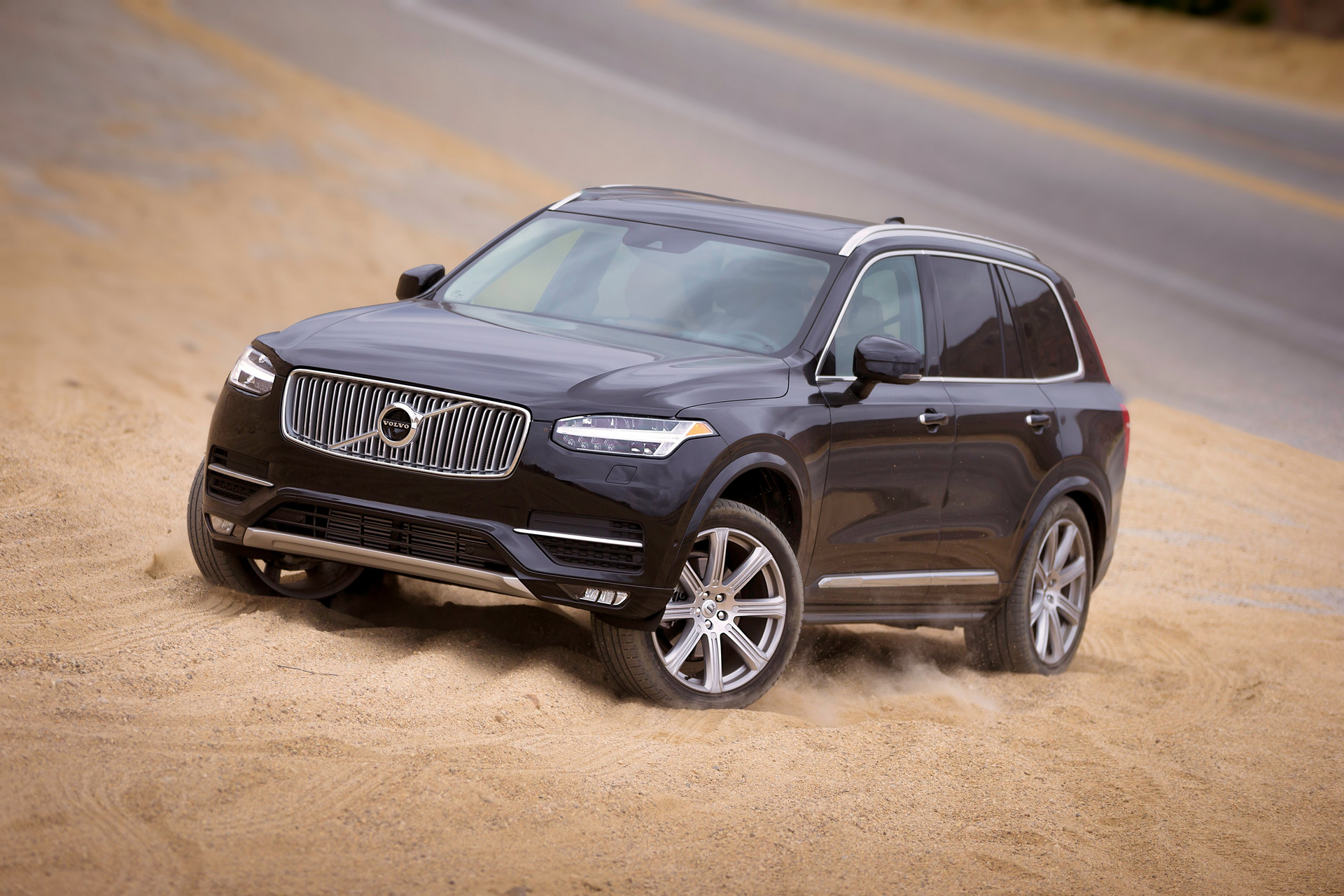 The North American Car of the Year is an automobile award announced at a news conference each January at the North American International Auto Show in Detroit. The jury consists of no more than 60 automotive journalists. Today Carrrs.com presents the winners of 2016 year.

Car of the Year 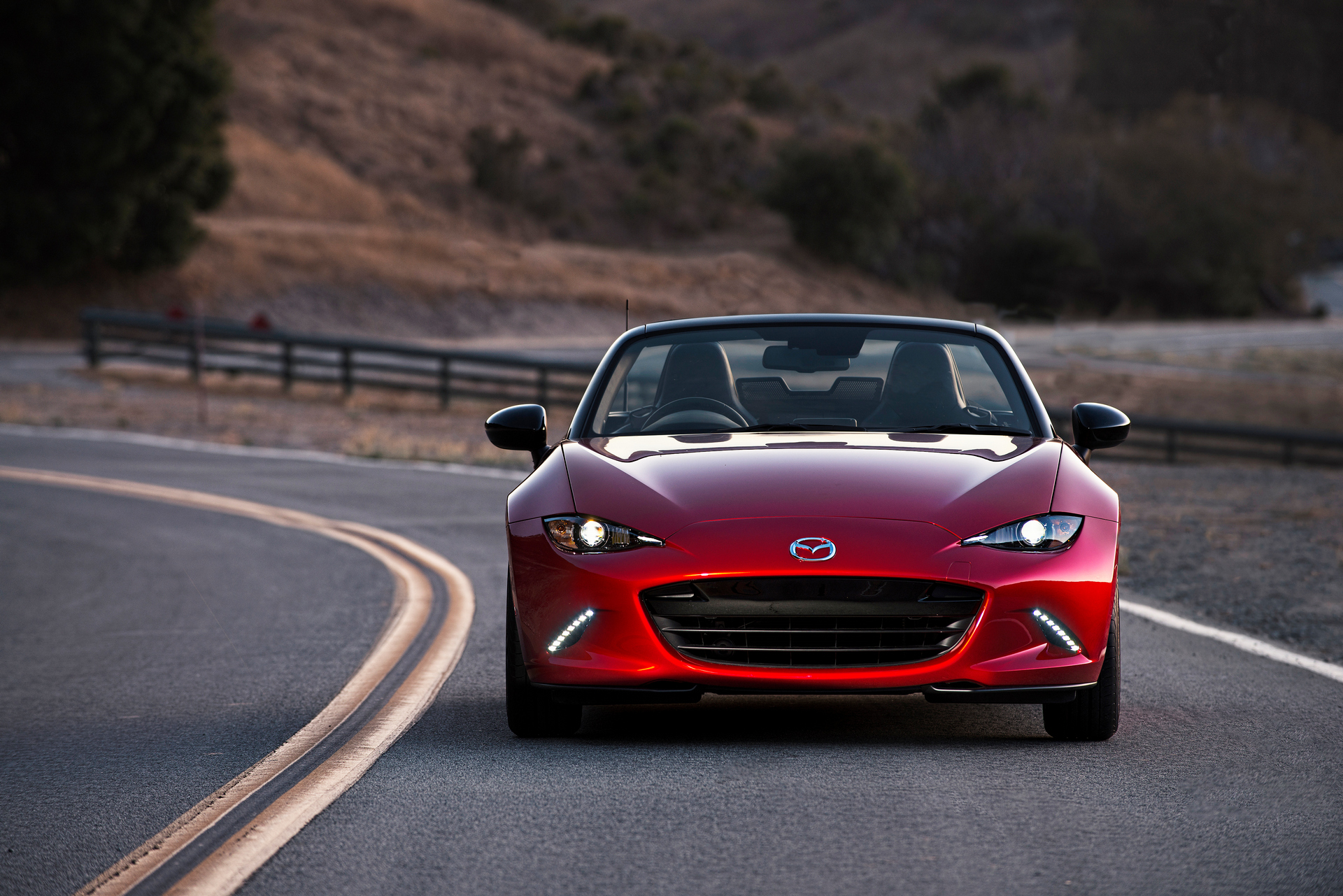 After 26 years and more than 950,000 Mazda MX-5 Miatas sold globally, the 2016 MX-5 has circled back to what made the world fall in love with it in the first place. When the first-generation MX-5 Miata made its world debut at the 1989 Chicago Auto Show, it ushered in a new era of the roadster: fun and affordable, yet with the added benefit of Japanese reliability. And, predictably, its popularity skyrocketed. MX-5s have become daily drivers, weekend toys and championship-winning race cars, alike.

Lightweight, nimble and fun to drive, the fourth-generation MX-5 draws inspiration from MX-5s that came before it, pairing the driver as one with the car – in Japanese, it’s loosely translated as “Jinba Ittai.” But it also carves a path that is thoroughly modern and uncharted for Mazda’s flagship roadster.

While the purity philosophy behind MX-5 has remained through the years, the 2016 MX-5 has had to adapt, gaining SKYACTIV Technology to make it faster and more efficient and KODO—Soul of Motion design for its striking looks. It is no wonder, then, that MX-5 continues to exist as a class of one, as competitors have come and gone through the years, and it sets the pace for the entire Mazda brand as spirited dynamics and innovation abound throughout the lineup. There has never been a more convincing lineup of cars and SUVs at Mazda than is available today, and every one of them displays a little piece of MX-5 in their value, dynamics and passion. 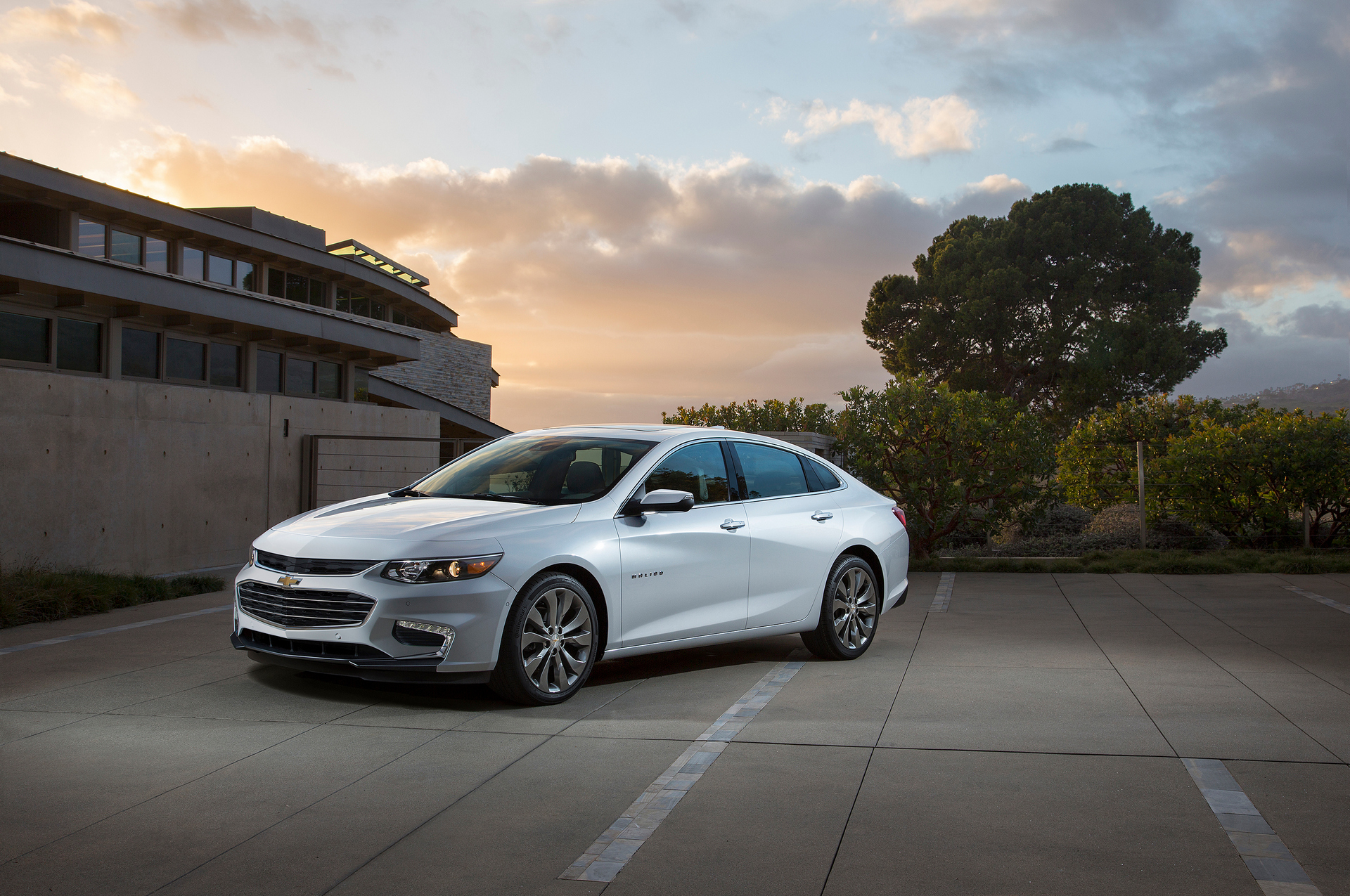 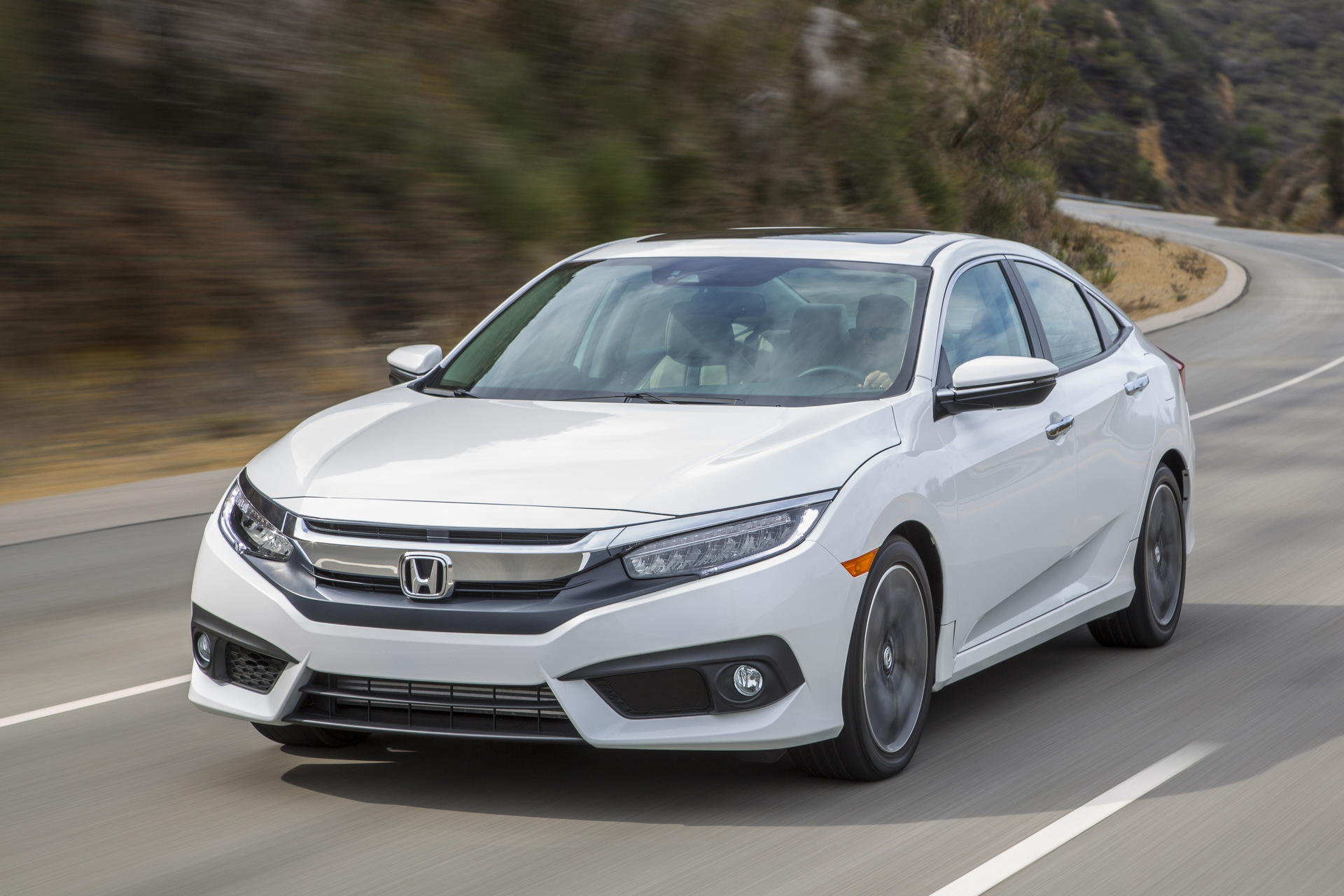 The creation of this new 10th-generation Civic represents one of the most comprehensive and ambitious new-model developments ever undertaken by Honda, requiring an unprecedented commitment of R&D resources and Honda engineering prowess. While the development of the Civic Sedan was led by a North American team – a first for Honda and Civic – the overall Civic series involves design and engineering teams from Honda R&D, sales and manufacturing operations around the world, especially in North America and Japan, but also in Europe, South America and Asia.

Virtually everything about the 2016 Civic Sedan is new – an all-new vehicle architecture, sporty and sophisticated new interior and exterior styling, a more spacious and high-quality cabin, two advanced new engines, and a host of new premium features and technologies.

Further, with the addition of Honda Sensing™ safety and driver-assistive technologies and the first application of Honda turbo engine technology to Civic, the 2016 Civic Sedan offers buyers a wider range of options than ever before. Civic models powered by the new 2.0-liter i-VTEC™ engine are designated as the Civic LX and EX trims. Civic models powered by the new turbocharged 1.5-liter engine are designated as the EX-T, EX-L (with leather-trimmed interior) and new line-topping Civic Touring, which reaches higher into the upper end of the compact car market than ever before.

Truck of the Year 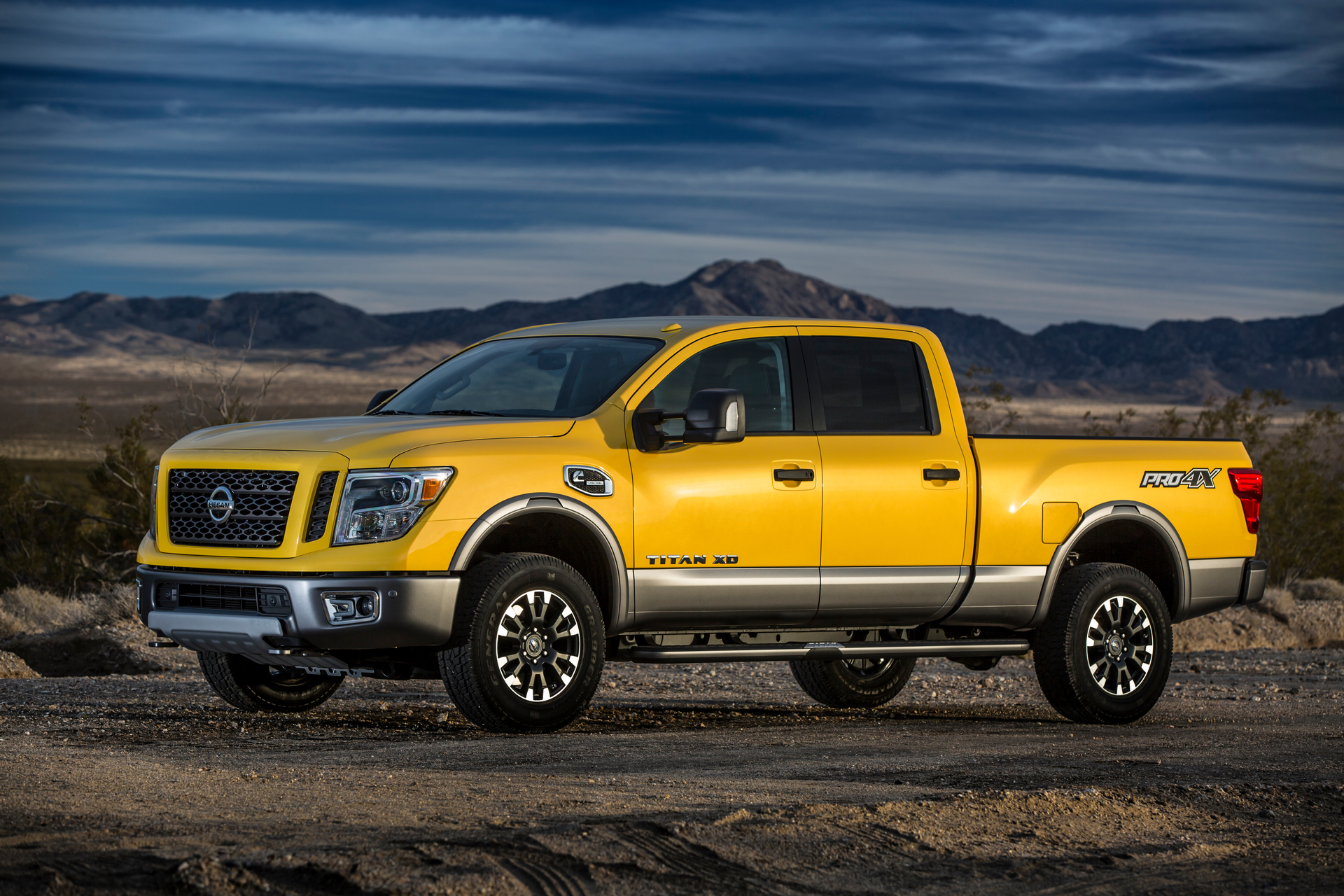 The 2016 Nissan TITAN XD shakes up the highly competitive full-size pickup segment in the United States and Canada with a bold design and capabilities that stake out a unique position in the segment between traditional heavy-duty and light-duty entries.

Called the “XD,” it offers some of the effortless towing and hauling of the larger, more expensive heavy-duty trucks – including an available maximum towing capacity of 12,314 pounds and maximum payload capacity of 2,091 pounds (when properly equipped) – yet has fuel-efficiency and affordability closer to a half-ton pickup.

“The full-size truck market is the toughest market to crack in the entire industry, with so many outstanding products available,” said Fred Diaz, division vice president and general manager, North America Trucks and Light Commercial Vehicles, Nissan North America, Inc. “This new Nissan TITAN XD is designed to offer buyers something the others don’t – combining outstanding towing and hauling capabilities and noteworthy fuel economy while towing and hauling. It also offers excellent ride comfort and handling, and the features and amenities that real working truck owners want.”

The XD is the first of a new family of Nissan TITAN full-size pickups. The new TITAN XD Crew Cab, with its powerful Cummins® 5.0L V8 Turbo Diesel, is the first of three cab configurations, two frame sizes, three powertrain offerings and five grade levels to be available once the full TITAN lineup is complete. 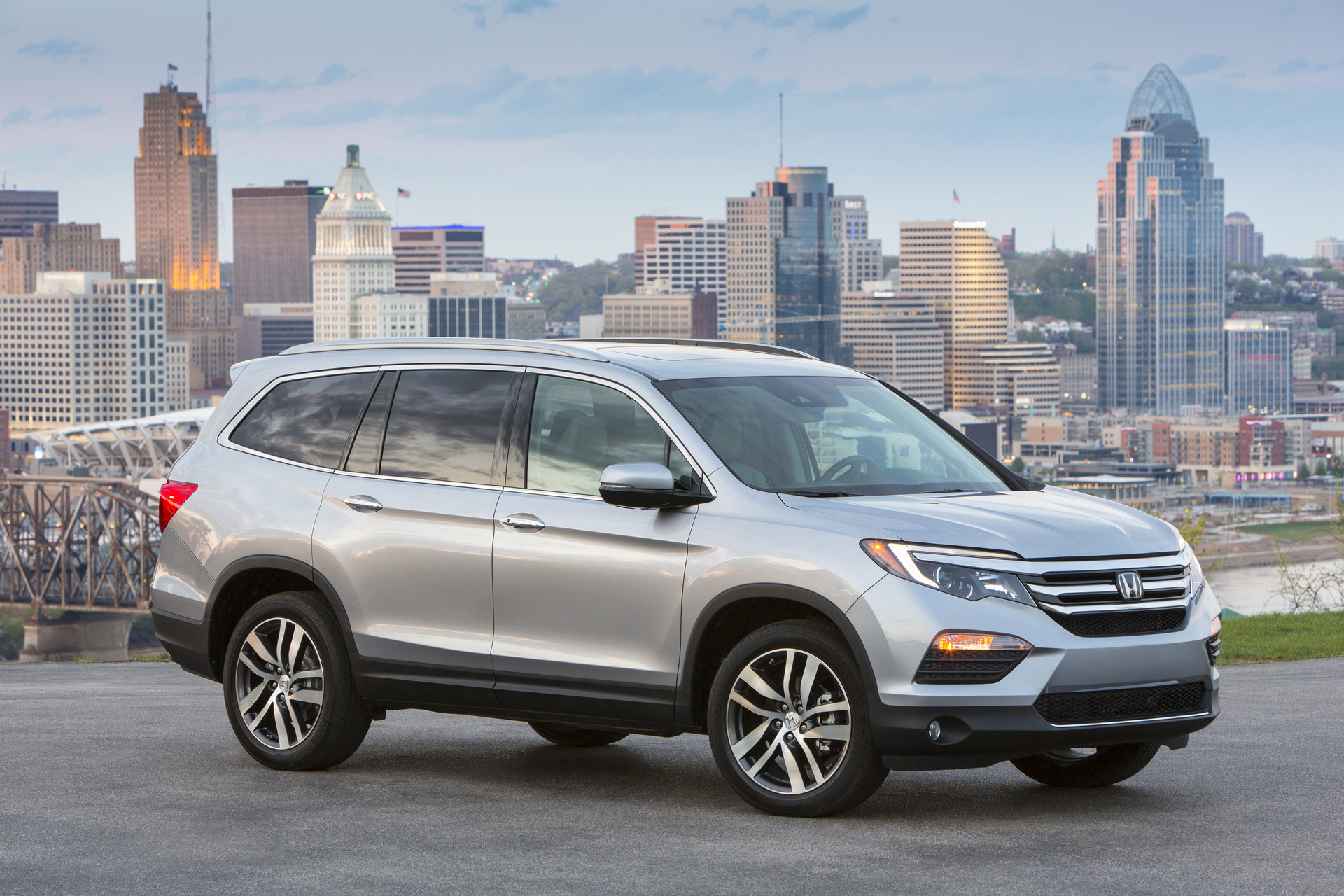 The all-new 2016 Honda Pilot SUV, with seating up to eight passengers, joins the Honda CR-V and all-new HR-V as the flagship in an expanded lineup of innovative, benchmark-setting Honda SUVs. It is the third generation of Honda’s popular three-row SUV to be designed, developed and manufactured in America. The new Pilot was designed and developed by Honda R&D Americas, Inc., in Los Angeles and Ohio, and is manufactured exclusively by Honda Mfg. Alabama, Inc. in Lincoln, Alabama.1

Reengineered from the ground up, virtually every aspect of the 2016 Pilot has been thoroughly redesigned to better accommodate the needs of all its occupants – the driver and all passengers – delivering more family-friendly utility, more advanced technology, and more premium attributes and amenities than ever before. The 2016 Pilot also ups the ante for premium refinement with major upgrades to interior quality and more standard comfort and convenience features on all trims, along with the addition of a new, line-topping Elite version that offers a series of Honda-first features including 20-inch wheels and tires, ventilated front seats, heated second-row seats, a heated steering wheel, a first-ever panoramic glass roof and many other luxury features.

The 2016 Pilot receives a new engine from Honda’s EarthDreams® Technology powertrain series – a direct-injected 3.5-liter SOHC i-VTEC® V-6 engine with Variable Cylinder Management™ (VCM®) – along with the available two new advanced transmissions and a class-defining all-new intelligent variable torque management (i-VTM4™) AWD system with Intelligent Traction Management and torque vectoring capability. Together, these features make this the most powerful, refined and capable Pilot Honda has ever offered. These technologies, combined with a nearly 300-pound reduction in vehicle weight (on upper trims), improved aerodynamics and reduced running resistance, make this the most fuel-efficient offering in the midsize SUV segment, with EPA fuel-economy ratings improved by as much as 2/2/2 mpg city/highway/combined2 over the previous model.

The new Pilot also moves to the top of the class in safety performance with the most comprehensive suite of Honda Sensing™ advanced safety and driver-assistive technologies ever offered on a Honda vehicle. Furthermore, the 2016 Pilot adopts the next generation of Honda’s Advanced Compatibility Engineering™ (ACE™) body structure along with a new “3-bone” underbody frame design and new hot-stamped ultra-high strength steel door rings. Taken together, these engineering features and technologies deliver major gains to the Pilot’s collision avoidance and collision protection capabilities, as it targets the highest available U.S. government (NCAP) and IIHS safety ratings.

The new XC90 is the first Volvo to carry the company’s new more prominent iron mark, which has the iconic arrow elegantly aligned with the diagonal slash across the grille. Together with the T-shaped “Thor’s Hammer” DRL lights, the iron mark introduces an entirely new, distinctive and confident face for Volvo’s forthcoming generation of cars. The XC90’s larger bonnet with its new topography, the beltline and the sharpened shoulders connecting with the tattoo-like, new rear lights are other important design signatures that will be mirrored across the range.

The XC90’s interior is the most luxurious to have been designed for a Volvo. The most striking feature is a tablet-like touch screen control console, which forms the heart of an all-new in-car control system. This system is virtually button free, a simplicity that opens up generous surfaces and gives us the opportunity to create a modern, luxurious interior architecture. The all-new XC90 interior combines materials such as finest Nappa leather and wood with handcrafted details, including a gear lever made of crystal glass from Orrefors, the famous Swedish glassmaker, and diamond-cut controls for the start/stop button and volume control.