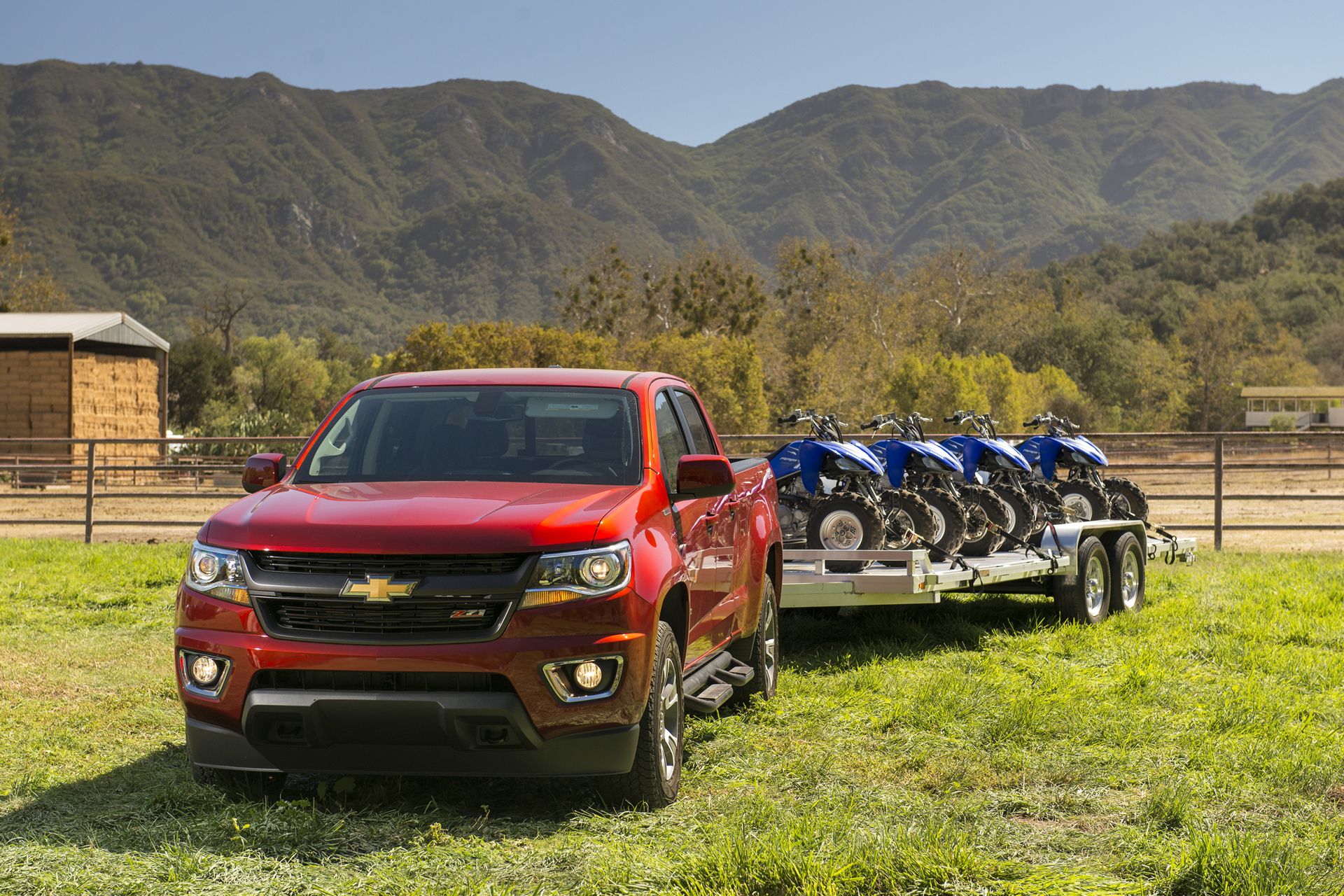 Chevrolet Colorado made an auspicious debut in 2015. The all-new, segment-busting midsize pickup was named the 2015 Motor Trend Truck of the Year and Cars.com’s Best Pickup Truck of 2015 – and was the fastest-selling truck in the industry, prompting a third shift to be added to the Wentzville, Mo., assembly facility. For 2016, Colorado returns with the same award-winning combination of refinement, maneuverability and efficiency, while continuing to offer innovative features such as Chevy MyLink with a built-in available 4G LTE Wi-Fi hotspot, Lane Departure Warning and Forward Collision Alert. They complement true truck elements such as the available G80 locking rear axle and a highly flexible bed with Chevy’s available GearOn™ system. The new 2.8L Duramax turboo-diesel expands the Colorado lineup to give customers more choices and the capability of exploring more possibilities on and off the road. It is offered in LT and Z71 Crew Cab models, with 2WD or 4WD.

The engine is part of GM’s global family of turbo-diesel four-cylinder engines and features a variable-geometry turbocharger for optimal power and efficiency across the rpm band and a balance shaft for smoothness. Power is SAE-certified at 181 horsepower (135 kW) at 3,400 rpm and 369 lb-ft of torque (500 Nm) at 2,000 rpm. A broad torque band makes the 2.8L Duramax very powerful at low rpm, while the turbocharged performance provides a confident feeling of immediate and smooth horsepower on demand. Additional engine features include: The Duramax 2.8L is the cleanest diesel truck engine ever produced by General Motors, and meets some of the toughest U.S. emissions standards, thanks in part to a cooled exhaust gas recirculation (EGR) system.

Additional features included with or exclusive to Colorado diesel models:

The Colorado’s integrated, driver-selectable exhaust brake system is based on the system introduced on the 2015 Silverado HD models and uses the compression power of the engine to improve vehicle control and reduce brake pad wear. In non-cruise mode, the transmission and the exhaust brake deliver the correct amount of braking to assist in vehicle control, regardless of vehicle load. It is a smart system that varies the amount of brakes needed for the vehicle, load and grade. The engagement of the system is smooth and quiet, while its performance enhances the driver’s feeling of control. The Colorado’s North American design is unique, with a confident stance and a sporty demeanor. It features triple-sealed doors inlaid in the body sides, like the Silverado, for improved aerodynamic performance and a quieter interior.

To help keep overall mass down, lightweight materials such as a segment-first aluminum hood are used. It also offers the segment’s first active aero grille shutters, designed to enhance aerodynamics when closed.

Colorado’s innovative solutions for hauling and accessing cargo include: The GearOn™ accessory system complements Colorado’s cargo-carrying versatility. It is designed for easy configuration with a multitude of mounting accessories for everything from bikes, kayaks, skis and stand-up paddle boards to a bed-mounted tent. Many of the GearOn accessories allow the bikes, boards and other “tools” of adventure to be mounted on upper rails, leaving room in the bed below for complementing gear. (See section below for more details.)

An interior for work, recreation and everyday comfort The Colorado’s interior is comfortable, thoughtfully equipped and well connected. A bold, upright instrument panel with large controls and a center console with a floor-mounted shifter similar to those found in midsize cars and crossovers. Colorado cabin designers paid exceptional attention to detail and premium appointments, including a sculpted headliner that enhances headroom, halo lighting on key controls for easier view and an open area at the front of the center console for easier phone charging. The Z71 model features exclusive color and trim details, including embossed seatbacks and contrast stitching. Colorado’s seats are designed for long-haul comfort and wear, too. They use dual-firmness foam for greater comfort on long drives and high-wear, stain-resistant cloth seating trim. Leather-appointed seating is available.

Comfort is enhanced with technologies, connectivity and other features that support owners’ daily and recreational lives including a 3.5-inch-diagonal driver information screen in the instrument cluster. New for Colorado in 2016, Chevrolet’s new MyLink system with an 8-inch-diagonal color touchscreen is compatible with Apple CarPlay, which puts iPhone features (iPhone 5 and later) on the display in a smart, simple manner, allowing drivers to make calls, send and receive messages and listen to music right from the touchscreen or by voice via Siri. That helps drivers spend more time with eyes on the road and hands on the wheel. Apple CarPlay-supported apps include Phone, Messages, Maps, Music and compatible third-party apps. A full list of those apps can be found at Apple.com/ios/carplay.

Complementing MyLink to enhance Colorado’s connectivity is new OnStar with 4G LTE featuring a standard built-in Wi-Fi hotspot. It provides a mobile hub for drivers and passengers to stay connected. The hotspot is on whenever the vehicle is on and comes with a three-month/three-gigabyte data trial, whichever comes first. Active from the time of purchase, six months of OnStar Guidance includes all of OnStar’s advisor-based safety and security features, including Automatic Crash Response and Stolen Vehicle Assistance, as well as Turn-by-Turn navigation.

Five years of OnStar Basic Plan includes RemoteLink Key Fob Services, allowing owners to remotely start and lock/unlock a car (if properly equipped), and activate the horn and lights from anywhere with a data connection. It also includes OnStar Vehicle Diagnostics, which runs monthly checks of vehicle systems – including the engine, transmission and anti-lock brakes – and sends a diagnostic update to the owner via email; and Dealer Maintenance Notification, which sends a diagnostic report directly to a preferred dealer to simplify service scheduling. The Basic Plan does not include any emergency services. The Colorado delivers the capability expected of a Chevy truck – engineered to offer better payload performance than any competitor and segment-leading trailering. Like the Silverado, the Colorado has a fully boxed perimeter frame, which provides the strength to support its capabilities, as well as a confident, smooth and quiet ride.

A coil-over-type front suspension features aluminum knuckles that are low in mass and high in strength, contributing to a more responsive feel and efficiency. Colorado also features the segment’s first application of electric power steering, which enhances efficiency by avoiding the energy used by what conventionally is an engine-driven feature.

The Colorado has a short turning radius of 41.3 feet (12.6 meters), enabling easier turning in tight areas such as city streets or backing a trailer into a camping spot. Four-wheel disc brakes, with four-piston front calipers, are standard and feature Duralife™ brake rotors – also pioneered on the Silverado. They can offer up to double the service life, which can save money on maintenance.

Another Chevy truck feature offered on the Colorado is the G80 automatic locking rear differential. Introduced by Chevy more than 40 years ago, it gives drivers a traction advantage when needed. It is standard on Z71 and available on WT and LT.

The four-wheel drive system employs an electronically controlled transfer case that allows the driver to shift from 2WD to 4WD. The driver can select from three modes, 2WD, 4WD HI or 4WD Lo. The 2.5L and 3.6L gas engines offered in the Colorado are based on proven designs found in other Chevrolet vehicles, but tuned uniquely for truck duty – including more torque at lower- and mid-range rpm levels – for a more confident feeling of power when the Colorado is loaded or pulling a trailer.

They’re also the most efficient in the segment, with up to 27 mpg EPA-estimated highway mileage with 2.5L 2WD models and 26 mpg with 3.6L 2WD models, when properly equipped. Aluminum blocks and forged-steel crankshafts, along with dual-overhead camshafts with variable valve timing, direct injection and jet-spray piston cooling, are features shared on both engines. A number of extended-life components can help reduce maintenance intervals and reduce the cost of ownership.

All models are matched with a six-speed automatic that complements the truck-tuned engines with features that make hauling and trailering easier and more comfortable, including auto grade braking and a tow/haul mode. Extended cab 2WD WT models equipped with the 2.5L engine are also available with a six-speed manual transmission. Colorado is designed to help keep occupants safe on the road, employing a number of active and passive safety features. Standard features include: A Safety Package is available on LT models and includes segment-first Forward Collision Alert and Lane Departure Warning, which use camera-based technology to warn drivers of potential crash threats. Work and lifestyle accessories were developed in tandem with the Colorado to match the truck’s capabilities with integrated functionality and designs that complement its distinctive styling.

The lineup includes the all-new, patent-pending GearOn™ system and a variety of accessories designed to make cargo hauling easier and more convenient, as well as exterior styling enhancement and interior items. Colorado’s GearOn™ system is designed to fit perfectly within the bed, for significant storage and hauling flexibility. It is upgradable, with modular cargo dividers and tiered storage to accommodate 4 x 8-foot sheets of plywood above the wheelhouses. It also uses the box’s four permanent and 13 tie-down provisions to allow for a variety of secure and convenient cargo stowage options.

Customers can have accessories installed when they purchase their new truck, so they are ready at the time of vehicle delivery. In fact, they can even roll the cost of the accessories into the monthly payments for the Colorado, and include them in the vehicle’s warranty.