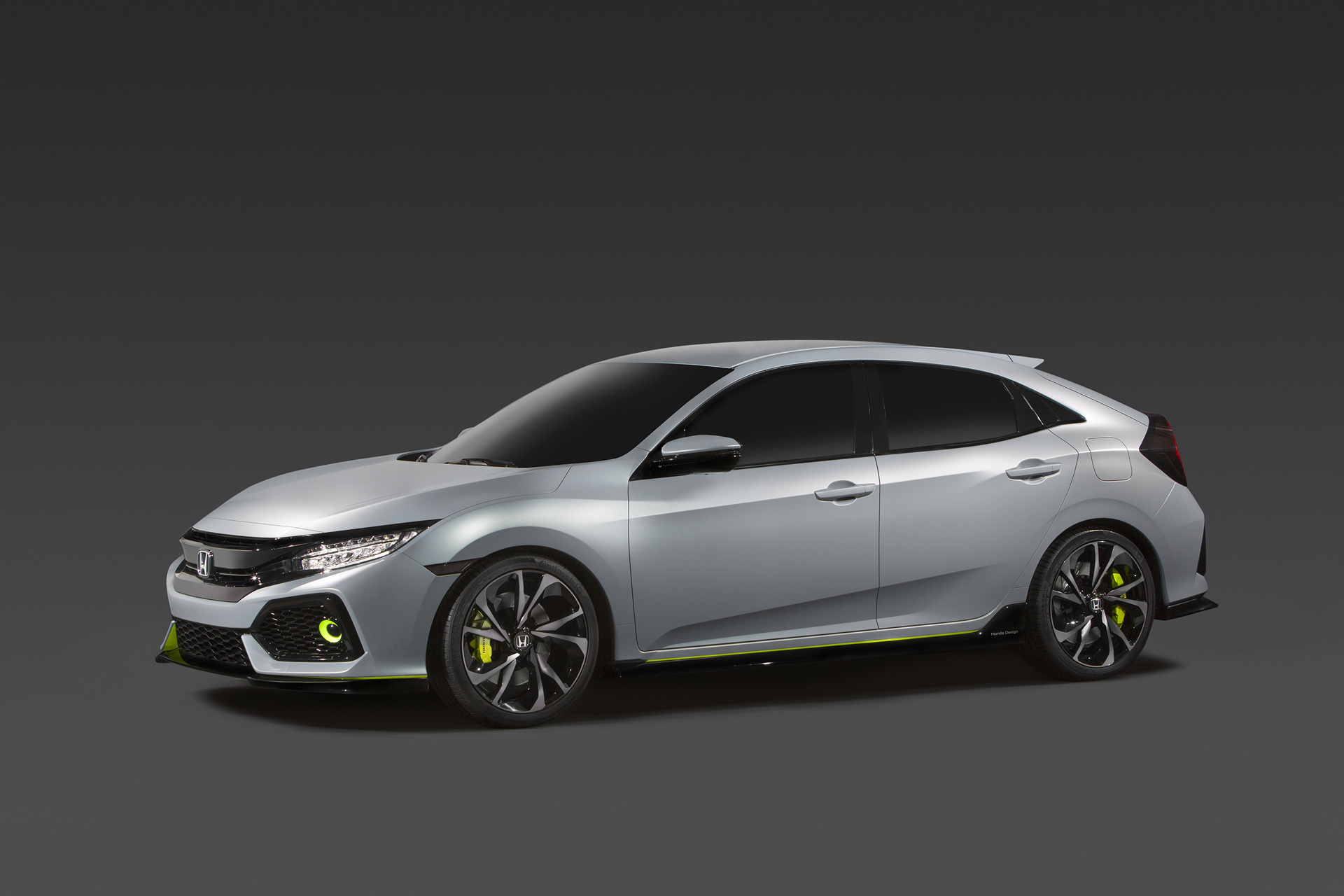 The next-generation Civic Hatchback, with its striking design and the promise of a sporty, European-inspired driving experience, today made its North American debut in prototype form just a day before the 2016 New York International Auto Show. American Honda Motor Co., Inc. also confirmed that it will marry the all-new 1.5-liter turbo engine to its 6-speed manual transmission for more sporty and dynamic performance. The arrival of the production 2017 Civic Hatchback later this year marks the continued rollout of the 10th-generation Civic lineup, the sportiest and most expansive family of Civics in the car’s 44-year history. The Civic Sedan was recently named the 2016 North American Car of the Year, and sales of Civic are up 37 percent through the first two months of 2016. Being built on the same world-class platform as the 10th-generation Civic Sedan, the 2017 Civic Hatchback will be defined by an unparalleled combination of sportiness, efficiency and utility, with distinctive styling and premium features that enthusiasts demand. The five-door hatchback will feature one powertrain for the U.S. market, a 1.5-liter DOHC direct-injected Turbo engine that can be mated to either a sporty CVT or a slick-shifting 6-speed manual transmission. “The Civic Hatchback wraps the 10-generation Civic platform and five-door hatchback utility in emotional, Euro-inspired styling,” said Jeff Conrad, senior vice president and general manager of the Honda Division of American Honda Motor Co., Inc. “Offered with the first application of the 1.5-liter turbo engine paired with a manual transmission, this sportiest Civic to date will attract a whole new set of enthusiasts buyers to the model and Honda brand.” The Civic Hatchback will launch later this year as the third new Civic variant, joining the 2016 Civic Sedan and Civic Coupe. The 10th-generation Civic lineup will be rounded out in 2017 with the arrival of Civic Si variants and the radical new Civic Type R.

The 2017 Civic Hatchback was developed by the joint efforts of Honda R&D teams in Europe and Japan and is expected to bring new buyers into the Honda showroom here in the U.S.

“We knew that we needed to create a striking and stand-out exterior design that challenged conventional European compact styling while staying true to the original Civic’s core values,” said Daisuke Tsutamori, chief exterior stylist for the 2017 Civic Hatchback Prototype. “This vehicle represents a marriage of distinctive and sporty design, rewarding driving dynamics and versatile practicality.”

New larger and wider wheels and tires give a feeling of an assured stance, while the long wheelbase, short overhangs and sleek cabin area further add to the dynamic feel of the exterior. At the front of the car, a short overhang with large air intakes presents a sharp and aggressive interpretation of Honda’s family face. LED headlights and daytime running lights flow from beneath the boldly sculpted hood into the muscular front wheel arches.

The sleek and swept-back body lines continue along the side of the car with a crease that incorporates front and rear door handles before culminating in the distinctive C-shaped LED rear lights. A second, lower character line extends from behind the front wheels up through the doors and meets the rear wheel arches, emphasizing the car’s dynamic forward-leaning stance. At the rear, the bumper incorporates angular creases and vents, designed to echo the aggressively styled nature of the rest of the car.

The 2017 Civic Hatchback will be produced exclusively at the Honda of the UK Manufacturing (HUM) plant in Swindon.