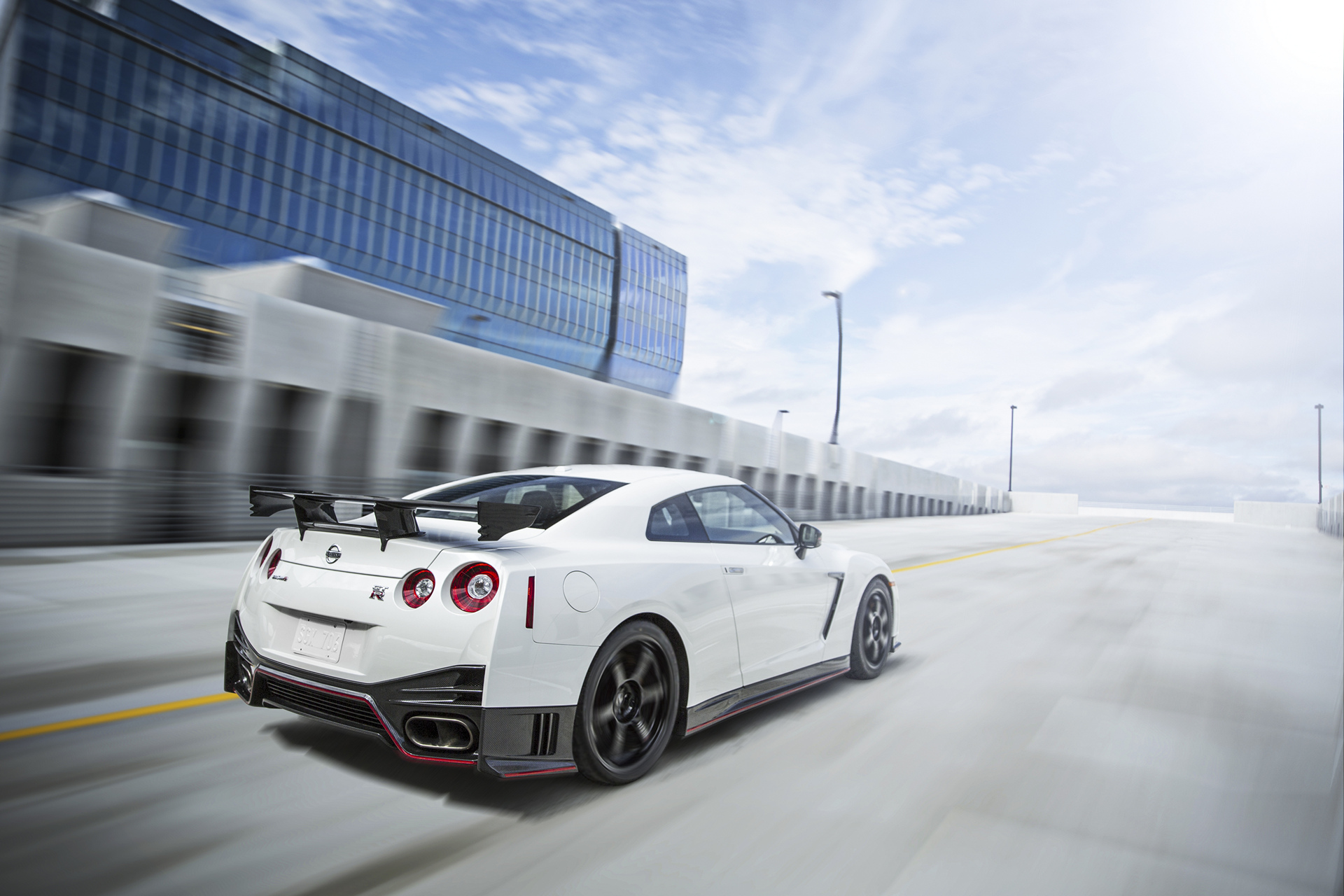 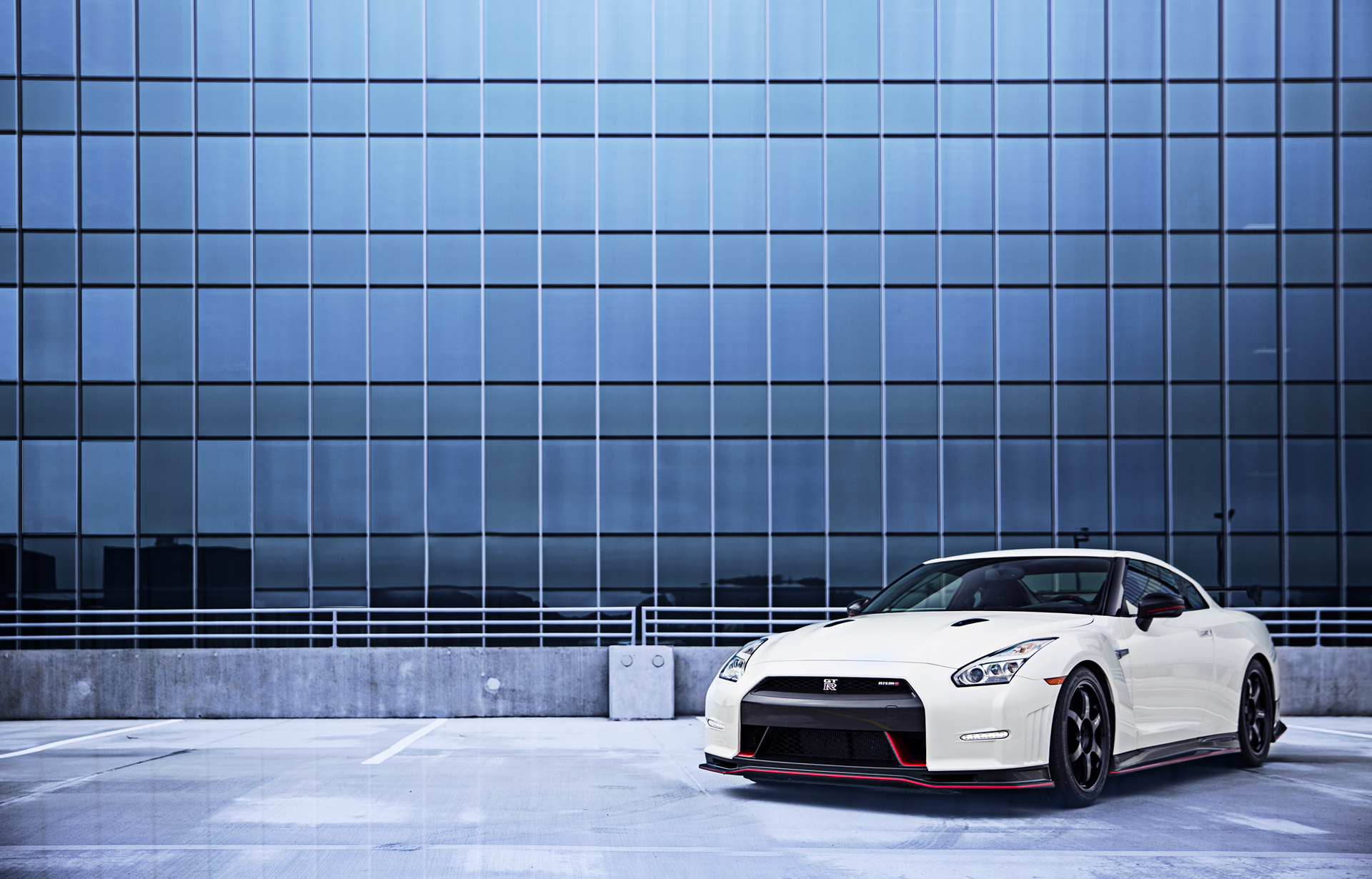 NISMO, Nissan’s motorsports and performance group, continues to burnish its legendary reputation. On the track, the new Nissan GT-R LM NISMO P1 car – the ultimate expression of GT-R – is going against the world’s best in global endurance racing. On the street, the 2016 Nissan GT-R NISMO continues to hold court as the most potent production vehicle in Nissan history. Practically a race car in street clothing, the GT-R NISMO was designed to explore the upper limits of performance.

The GT-R NISMO model itself was inspired by a NISMO-prepped GT-R racecar that competed successfully at the 2012 Nürburgring 24-hour endurance race in near- production form. And, as proof of concept, in late October 2013, a “time attack” GT-R NISMO*** was driven to a new volume production car and Nissan GT-R Nürburgring record of 7 minutes, 8.679 seconds around the famed road course. 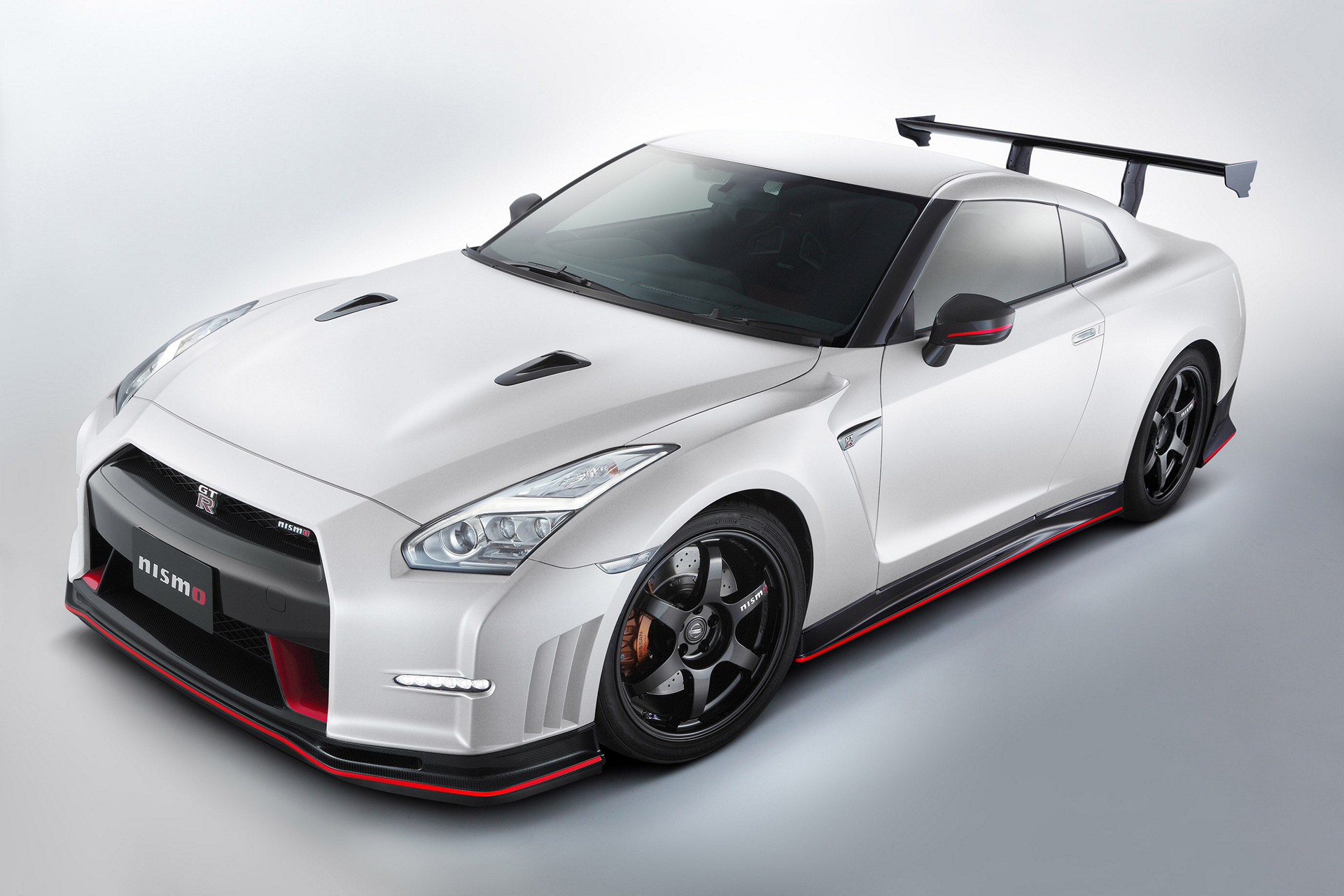 The 2016 Nissan GT-R NISMO employs innovation, uncompromising engineering and motorsports-inspired technologies to achieve its exceptional levels of power, speed and handling. Under the hood, the 3.8-liter V6 VR38DETT engine benefits from the expertise that NISMO has gained from participating in motorsports events around the globe. Engine power has been increased (versus standard GT-R models) and is rated at 600 hp and 481 lb-ft of torque. High-flow, large diameter turbochargers, used in GT3 competition, improve breathing, while optimized individual ignition timing control for each cylinder and upgraded fuel pump improve combustion.

As with all 2016 GT-R models, each GT-R NISMO engine is hand-assembled from beginning to end in a special clean room by specially trained technicians, a process similar to racing powerplant construction. An aluminum plate is added to the front of each engine showing the name of the “Takumi” engine craftsman.

A special factory tuned Titanium exhaust system is optionally available. The system is made of Formula 1 race car grade titanium (Ti-1Cu), with its alloy construction generating a high strength-to-weight ratio and delivering a weight savings over the stock exhaust unit – along with a clear sound that is unique to titanium. The system offers reduced thickness, integrated fins and undercover ducts, allowing it to endure high temperatures without affecting performance under extreme driving conditions.

The VR38DETT V6 is backed by an advanced paddle-shifted sequential 6-speed dual clutch transmission, which can be driver selected to shift at race car-like speeds. The sequential-shifting transaxle features separate wet clutches for the odd (1,3,5) and even (2,4,6) gears and pre-selects the next highest and next lowest gear for quick shifts.

Of note is a special GT-R-specific yaw-rate feedback control, which measures the differences between the target yaw rate calculated from steering angle and actual yaw rate detected by the yaw-rate sensor and G sensor to adjust torque bias.

The Premium Midship Platform layout places the transmission, transfer case and final drive at the rear of the vehicle, without the use of traditional torque tubes, allowing the suspension to operate independently and optimizing tire grip at each corner. Contributing to overall vehicle balance and low center of gravity, the unique offset input and reaction shaft design of the rear transaxle enables a shorter design profile versus a typical manual transmission, moving the concentration of powertrain weight lower in the vehicle.

The GT-R NISMO’s suspension set-up is inspired by that of the NISMO racing GT-R and tuned for stunning agility, road holding and handling finesse, without compromising refinement. The springs and custom-developed Bilstein DampTronic dampers in the front and rear suspension are specially tuned to deliver exceptional grip levels and progressive handling response at the limit. Three suspension modes can be selected: Comfort, Normal and R, for circuit applications.

The rigid forged metallic black 6-spoke RAYS® forged lightweight aluminum 20-inch wheels, manufactured by RAYS®, are inspired by Nissan’s legendary GT500 racecar. They feature knurling inside the wheels to help keep the tires from slipping around the wheels under heavy acceleration or braking.

The GT-R NISMO’s tires – developed by Dunlop with a NISMO-specific compound – exhibit outstanding grip and handling characteristics. The front tires are 255/40 ZRF20, with 285/35 ZRF20 in the rear. 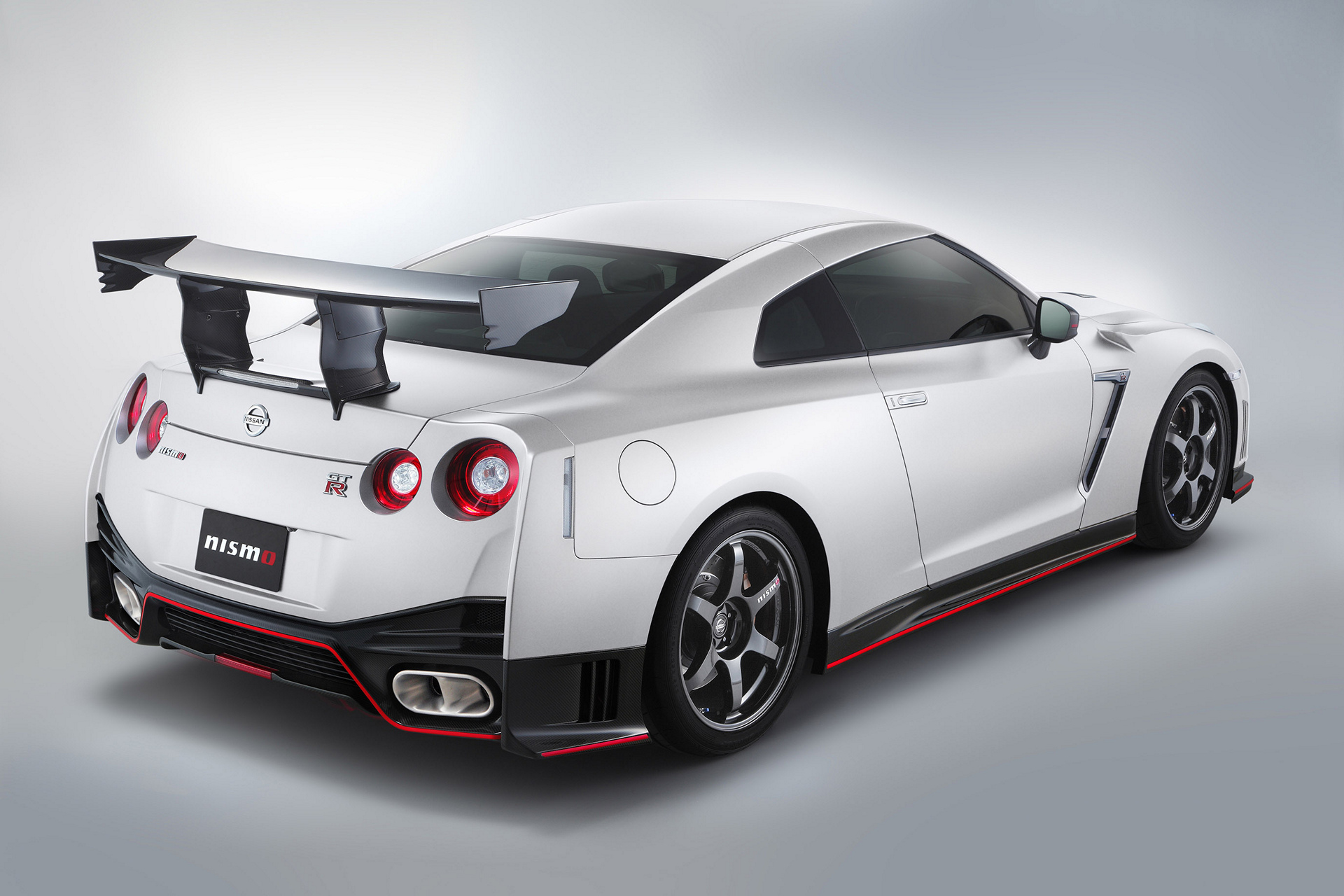 Using the latest Computational Fluid Dynamic simulation techniques to analyze airflow, NISMO developed an aero package for the GT-R NISMO that improves road holding and minimizes the negative impact of drag, while giving the car a more menacing and muscular appearance.

Together, the front bumper, engine undercover and carbon rear spoiler increase downforce, lowering the center of gravity and generating an additional 220 pounds of downforce (at 185 mph) compared to the standard GT-R models. The car’s aerodynamic characteristics are tuned to ensure the downforce is equally spread front to rear at all speeds for progressive handling characteristics. A widened front bumper configuration and elongated yet tapered rear bumper design keep the drag to Cd 0.26, same with that of standard Nissan GT-R.

NISMO racers influenced the design of the steering wheel, which is dressed in Alcantara®, with three spokes, red center mark and red stitching to give the best combination of grip, feedback and comfort. The combi meter has carbon-like finish, and tachometer features a red design. The meter hood is also dressed with Alcantara®. Interior trim features include discreet red stitching on the seats, center console, door trim and steering wheel.

As with all 2016 GT-R models, the GT-R NISMO’s instrument panel is dominated by a video game-inspired, multi-function display that was created in collaboration with Polyphony Digital, makers of the Gran Turismo electronic game. Eleven pages of information are available on this system, including mechanical and driving information, acceleration, brake pedal pressure, steering angle and a recording function with playback.

The 2016 Nissan GT-R NISMO is available in one limited edition model with just one available option, the Titanium Exhaust System. It is assembled in Tochigi, Japan, with the engines hand-assembled in Yokohama, Japan.

NISMO, a short form of “NISsan MOtorsports,” is the performance brand for Nissan, and is one of the company’s purveyors of “innovation that excites.” NISMO offers products featuring innovative technology and high performance to a wide range of customers for street use. NISMO cars provide an exciting driving experience with motorsports-inspired aerodynamics and styling, enhanced handling characteristics and unmatched agility.

In the motorsports world, NISMO competes in the highest forms of GT and sports car racing, such as Japan’s Super GT Series and the World Endurance Championships (WEC), as well as providing engines to teams that compete in the 24 Hours of Le Mans and the European Le Mans Series (ELMS). In 2015, the Nissan GT-R LM NISMO will compete in the FIA World Endurance Championship, which includes the Le Mans 24 Hours.