It was hailed as nothing less than the return of the fundamental, affordable rear-drive sports car when it arrived a few years back, and now for 2017 it’s got a new name, a new look and higher performance: the Scion FR-S adopts the Toyota 86 identity used in other global markets, as Scion and its models transition back to the Toyota brand.

It is a happy coincidence that the 86’s 2.0-liter boxer-type four-cylinder engine has 86mm bore and stroke dimensions. For ardent Toyota fans, ‘86’ is a revered badge, indeed. They know ‘AE86’ as the global name for the Toyota Corolla GT-S that sold here in the mid-1980s. It was an affordable, tossable, rear-drive sports coupe with a high-revving 1.6-liter engine and was simply a blast to drive. (And it looked so ’80s with those big ‘Twin Cam 16’ decals on its doors.) In Japan, it was known as “hachi-roku,” meaning 8-6.

Unchanged for the Toyota 86 is a combination of style, performance, handling and affordability that have made this 2+2 sports car a hit with enthusiasts of all ages. 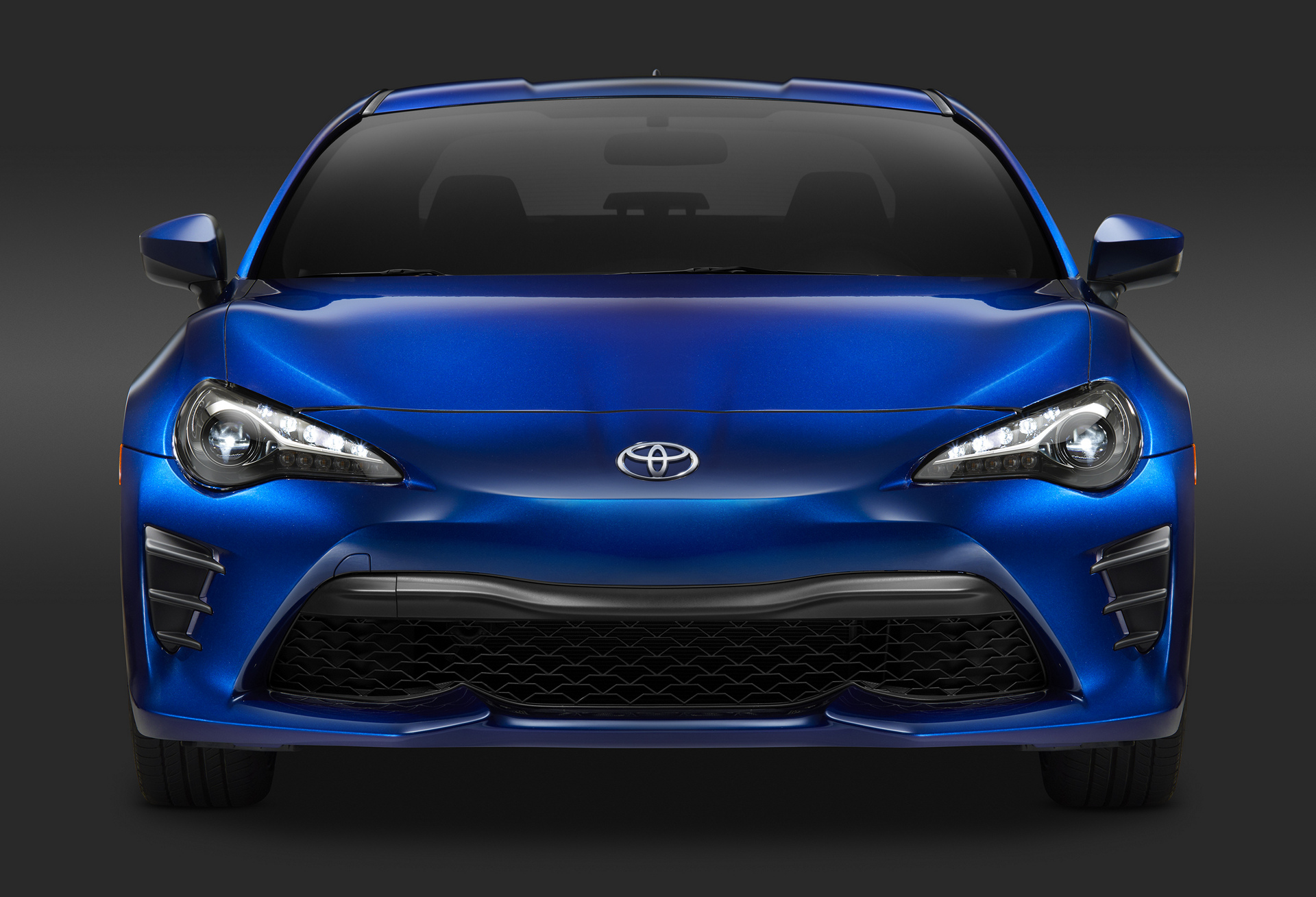 For its move to Toyota, the 86 sports car adopts more aggressive styling with a larger center intake emphasizing the low, wide stance of the car. The front of the car has a new high-tech design with standard LED front headlamps, daylight running lights, and turn signals, a new fog lamp bezel and revised bumper. The rear sports LED tail lamps and more sculpted bumper design with integrated aerodynamic diffuser. The alloy wheels feature a new twisted spoke design and 86 logos have been incorporated into a badge on the front fender, as well as inside the front headlamps. 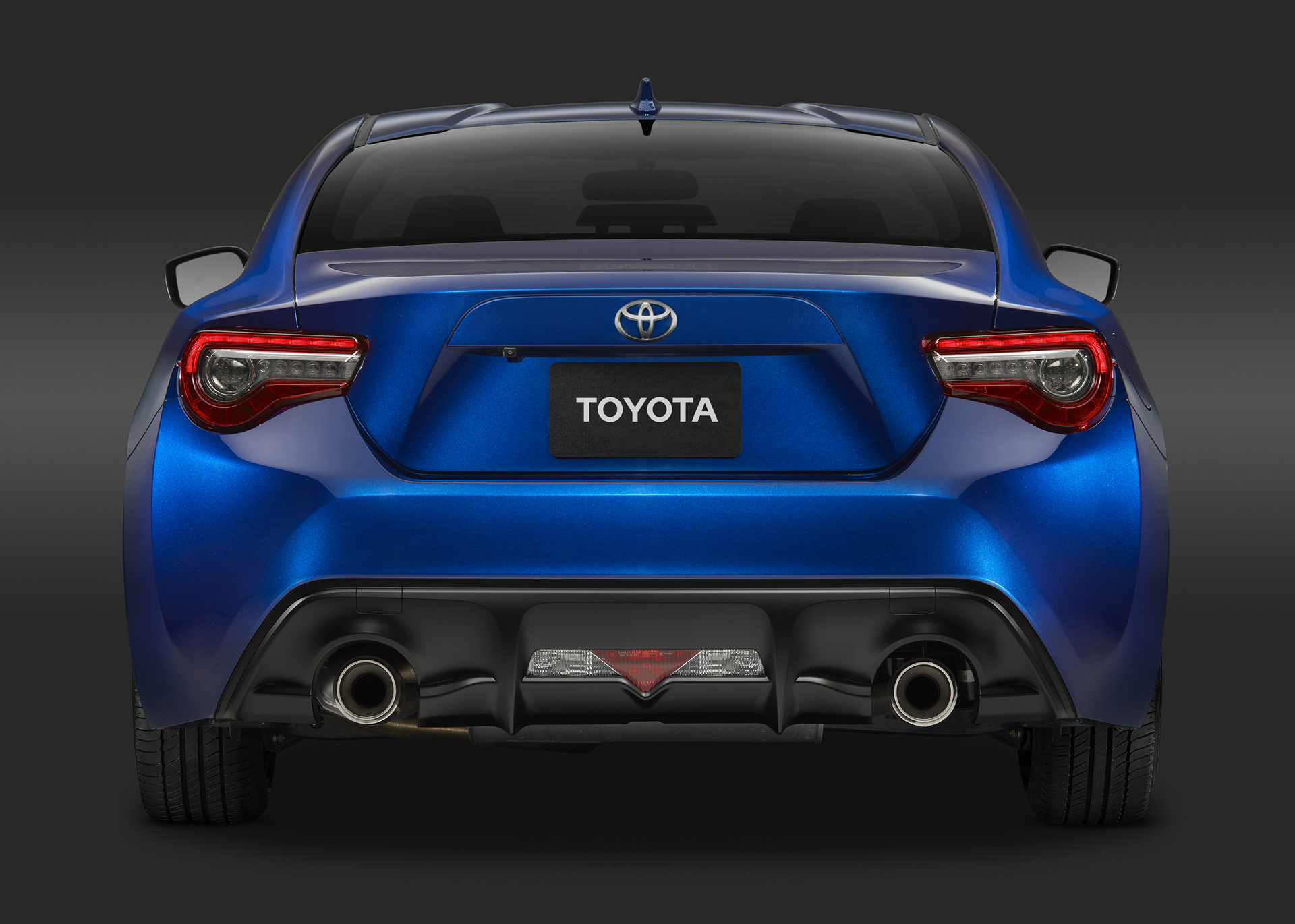 The interior also features the 86 logo on the new “Granlux” material used on the instrument panel surround. The same material adds a new, soft feel to the door trim. Drivers also will enjoy new seating material with silver stitching and a revised steering wheel with integrated audio controls and an 86 logo on the center hub.

Enhanced control and agile performance are achieved through revised shock tuning and a spring rate change. On the manual version of the car, additional performance comes from a differential gear ratio change and revised engine tuning that increases the torque to 156 lb.-ft, as well as a five-horsepower increase to 205 hp. On both manual and automatic 86 models, Hill Start Assist Control (HAC) helps prevent the car from rolling back on steep hills from a stop.

At a svelte 2,758 lbs. (with six-speed manual transmission), the Toyota 86 is among the lightest sports cars on the market. The 86 also sports an ultra-low center of gravity, and its sleek body meets the wind with a low 0.29 coefficient of drag (Cd).

Among the engine’s high-performance features used to extract 100 hp per liter of displacement is the Toyota-innovated D4-S fuel injection system that combines direct injection and port injection technologies. The direct system provides a cooling effect in the cylinders, which allows the engine to use a high 12.5:1 compression ratio. The port fuel injectors come into play during light- and medium-load conditions to maximize combustion efficiency.

Sports car purists love the 86’s standard six-speed manual transmission. It’s got a short-throw shifter and easy-effort clutch, making it a joy to flick through the gears. The automatic is a joy to work, too, with its steering-wheel-mounted paddle shifters, Sport mode, and Dynamic Rev Management® technology, which “blips” the throttle on downshifts. With its super-fast shifts, it’s an automatic to please those purists who prefer the choice to shift manually or automatically.

The high-performance drivetrain is completed by a standard Torsen® limited-slip differential that helps maximize traction between the rear wheels while cornering.

The Toyota 86 chassis is a specially developed rear-drive sports car platform using a MacPherson strut front suspension (including a strut brace) and double-wishbone rear suspension. Electric power-assist steering is tuned to provide excellent feedback through the small-diameter, leather-wrapped wheel. The steering is quick, with just 2.48 turns lock to lock, and with a tight 36.1-ft. turning circle. In the driver’s hands, the thick-rimmed wheel feels like a surgical tool for operating on the road.

The world’s best sports cars boast of heritage. The Toyota 86 certainly lives up to that standard, counting in its lineage the tiny Toyota Sports 800 of the mid-1960s, one of the first sports cars with a lift-off roof panel.

On the racetrack, a 2000 GT won the inaugural Six Hours of Fuji in 1967 and scored SCCA C-Production wins in the U.S. More recently, several 2000 GTs have crossed the $1 million threshold at collector-car auctions.

The Toyota 86’s honest sports car approach carries into the cabin, where intuitive controls help the driver keep the focus on driving. A large center-mounted tachometer, the focal point of the easy-to-read gauge panel, integrates a digital speedometer and features a programmable rev indicator. It’s flanked on the left by an analog speedometer, while fuel level and temperature gauges are positioned to the right of the tachometer.
Classic sports car touches include simulated carbon-fiber dash and door trim and aluminum sport pedals and scuff plates. The Toyota 86 shows its practical side with a rear seatback that lowers to expand trunk space.

For on-the-go connectivity and on-board navigation, the optional 86 Display Audio with Navigation system features push-to-talk voice navigation and geo-located points of interest. Aha™, available on iTunes® and Google Play®, provides access to 100,000 free audio stations. Drivers also can find local restaurants, coffee, hotels, and weather updates through location-based services like Yelp and TripAdvisor, along with popular social media applications, sports, news and entertainment. A phonebook holds up to 2,500 contacts with four numbers each.

Toyota’s 36-month/36,000 mile basic new-vehicle warranty applies to all components other than normal wear and maintenance items. Additional 60-month warranties cover the powertrain for 60,000 miles and corrosion with no mileage limitation.