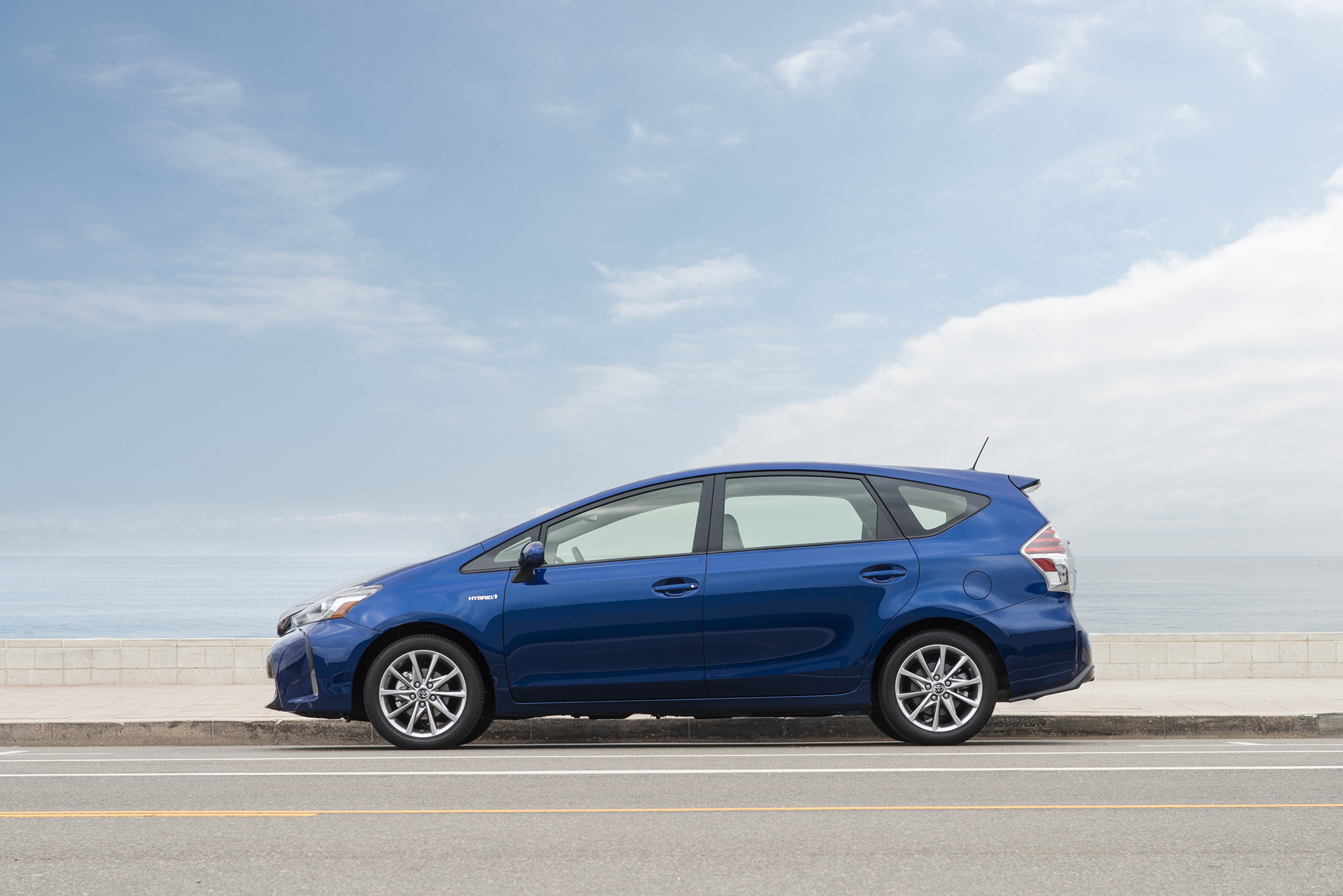 The perfect family vehicle of the near future combines the technology, space and versatility of an SUV with the fuel efficiency of a hybrid. Leave it to Toyota, the world leader in hybrid vehicles for 20 years, to bring the future forward with the unique Prius v, the largest and roomiest of Toyota’s Prius family. 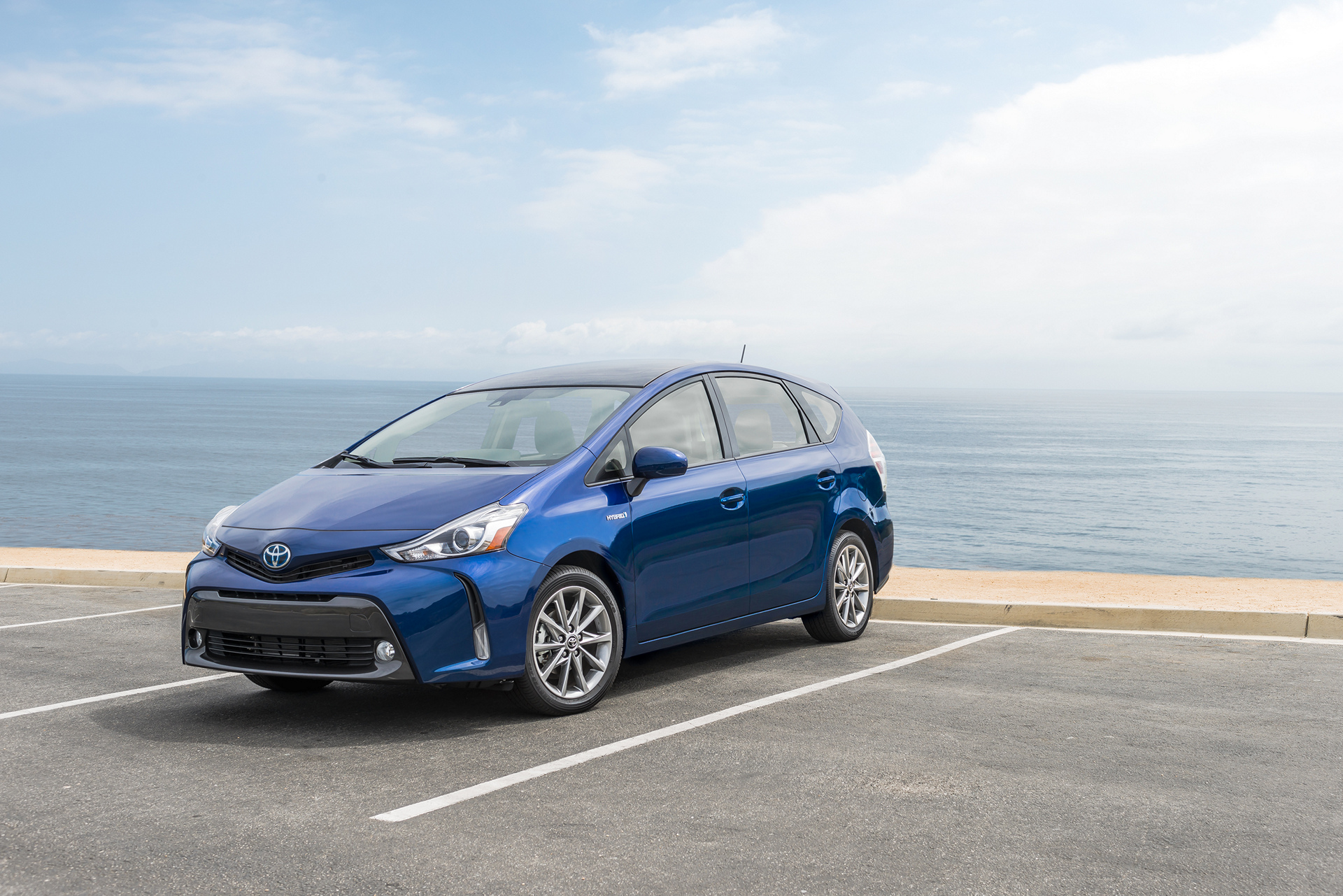 The first numbers anyone wants to see for a hybrid vehicle are fuel economy figures, and the Prius v impresses. Its EPA-estimated fuel economy ratings of 43 mpg city, 39 mpg highway and 41 mpg combined are unmatched by conventionally powered vehicles that offer as much room as the Prius v. 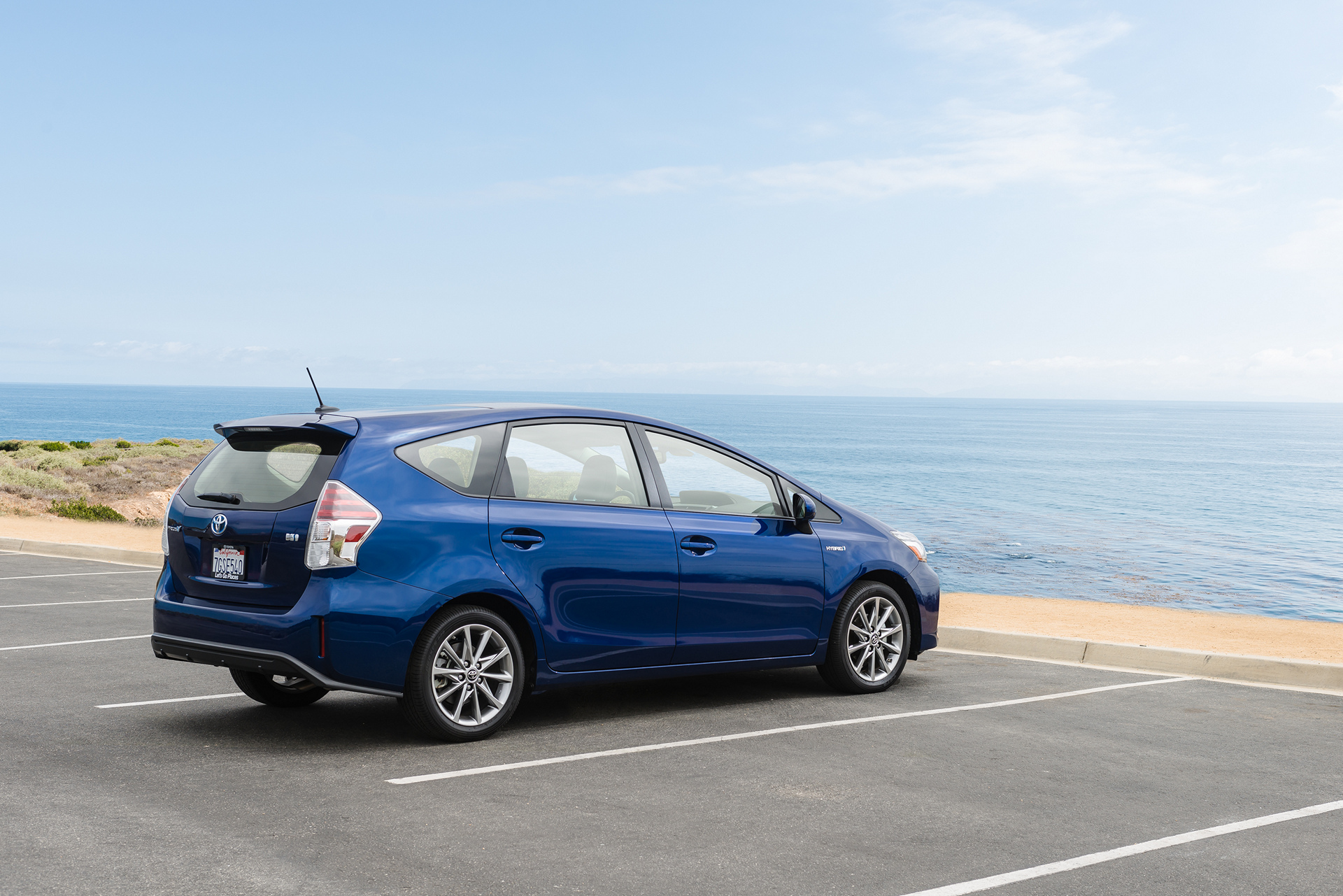 As impressive as those fuel efficiency numbers may be, family vehicle buyers will probably be more impressed with the Prius v’s 2016 TOP SAFETY PICK+ rating from the Insurance Institute for Highway Safety (IIHS). That’s for models equipped with the available Advanced Technology Package, which includes Pre-Collision System (PCS), a system which can apply the brakes and retract seatbelts in certain conditions when it determines that a frontal crash is unavoidable. 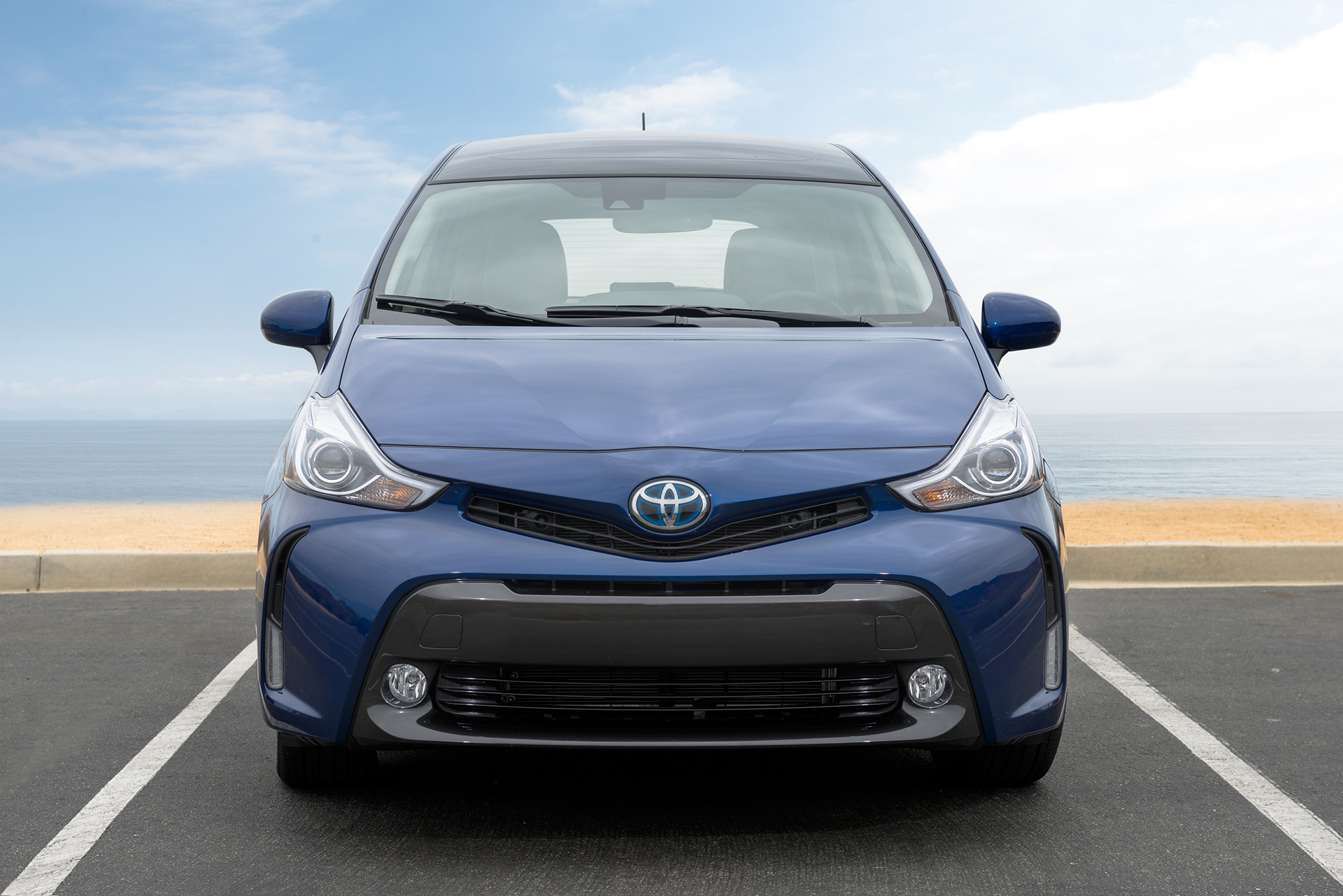 It’s paired with Dynamic Radar Cruise Control, which is designed to maintain a set following distance from a vehicle traveling ahead, and can apply the brakes if, for example, another vehicle suddenly cuts in front. The Prius v was also the first vehicle to earn a top score in the IIHS Headlights Test with the available LED headlights. 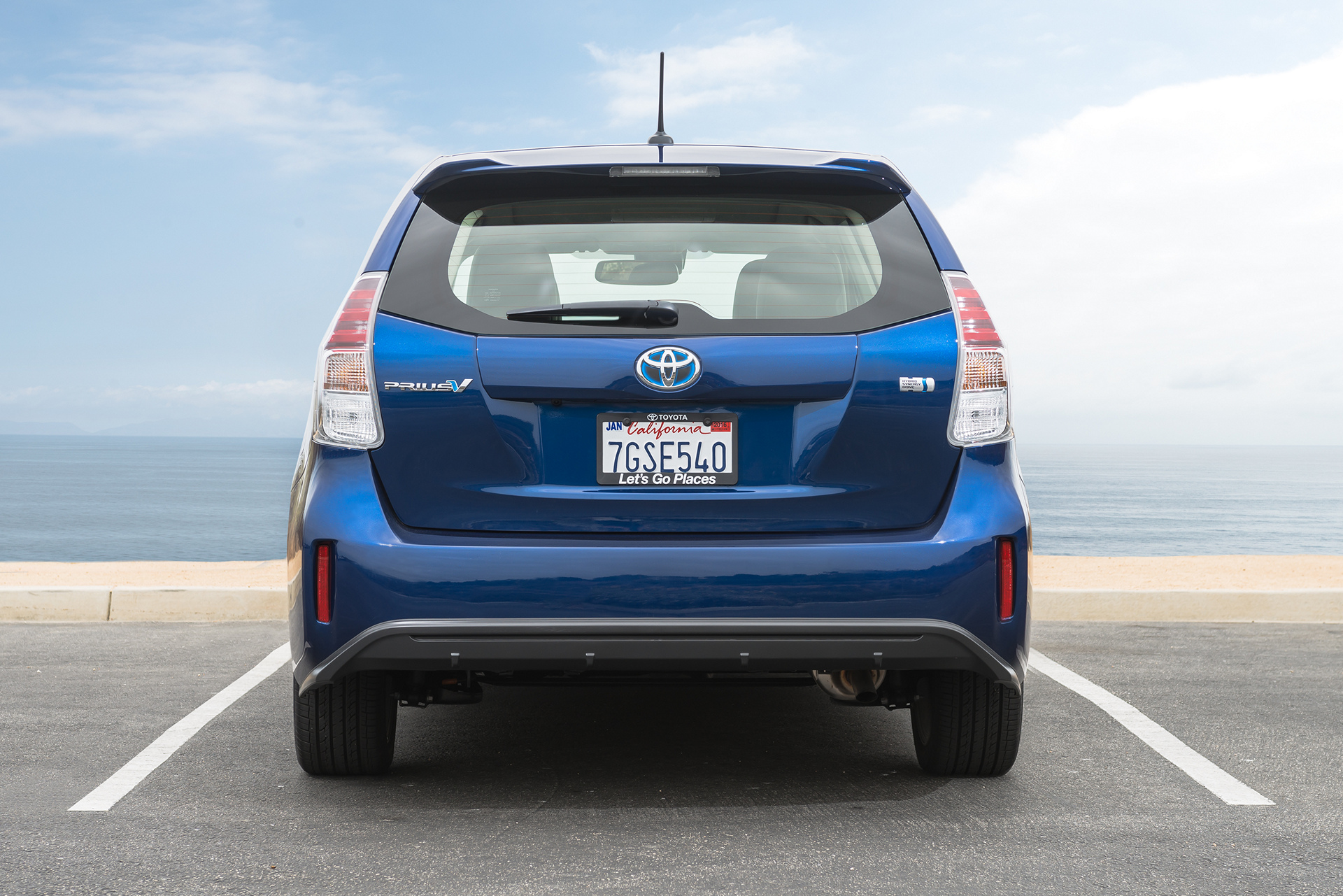 For 2017, the Prius v steps up its multimedia capabilities by adding an upgraded Entune® Audio head unit with advanced voice recognition and Siri® Eyes Free functionality. For a family vehicle, those are prized features, indeed. A new exterior color, Galactic Aqua Mica, adds a touch of elegance usually reserved for luxury models. 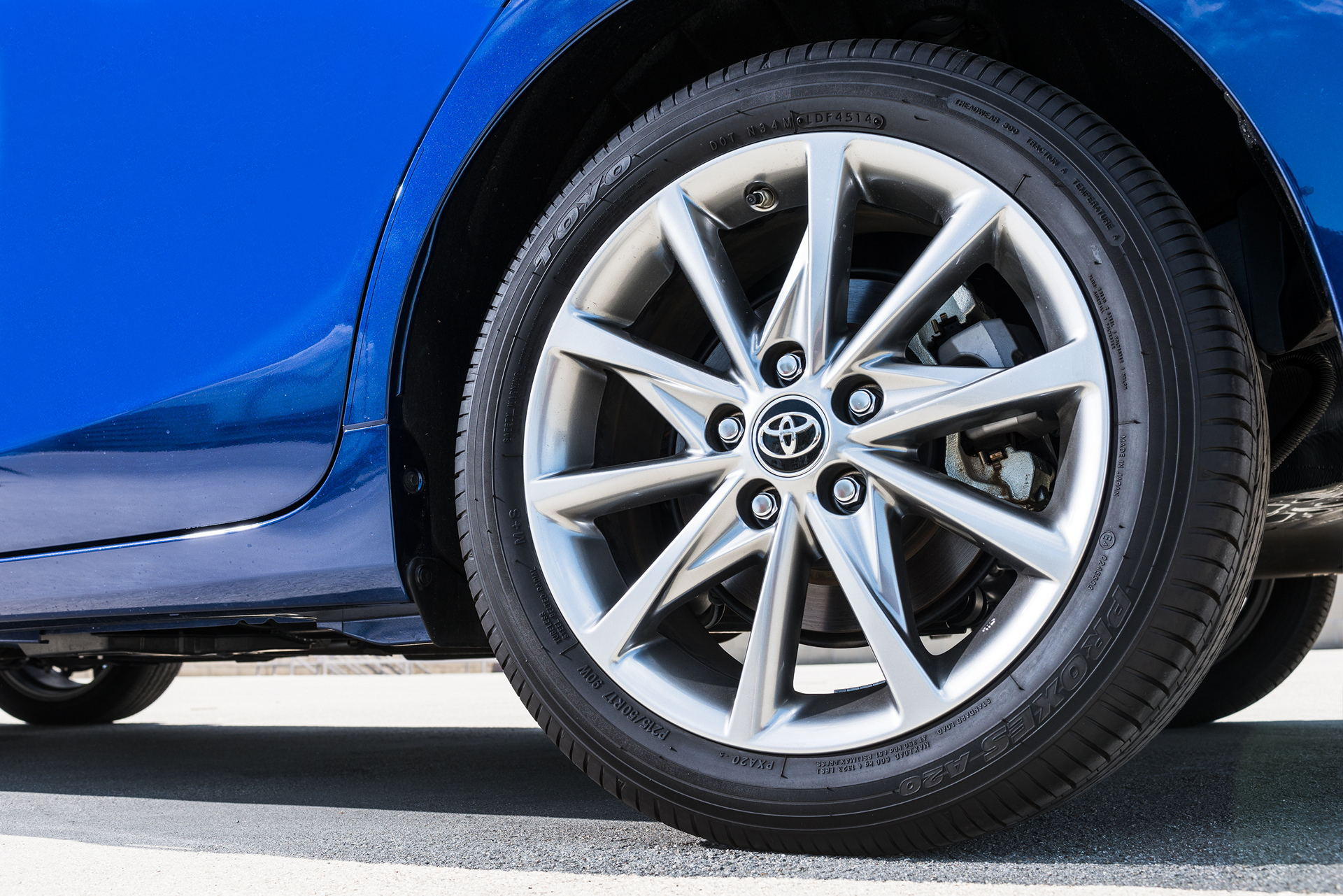 Built on a 109.4-inch wheelbase, the Toyota Prius v is built to carry a family in comfort. The raised seating position is more like that of a crossover, so everyone has a good view outward. All-around visibility helps make the Prius v easy to maneuver in tight places. 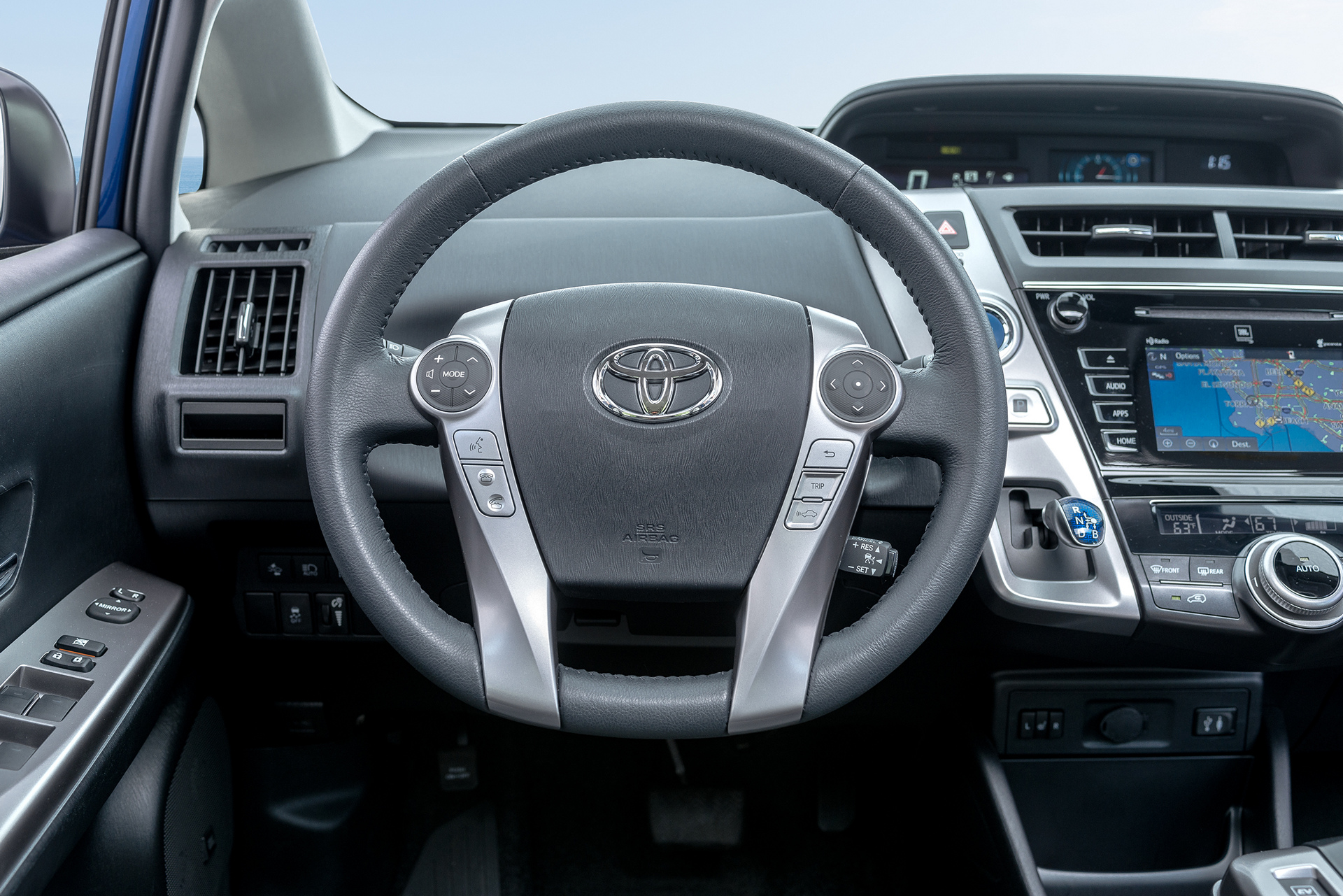 Rear-seat legroom in the Prius v of 35.9 inches is on par with midsize sedans. Sedans, however, generally don’t have the versatility of Prius v’s sliding second seat row, which enables the customer to maximize passenger or cargo room as needed. Nor do sedans generally have seatbacks that can recline up to 45-degrees, unless they’re top luxury models. 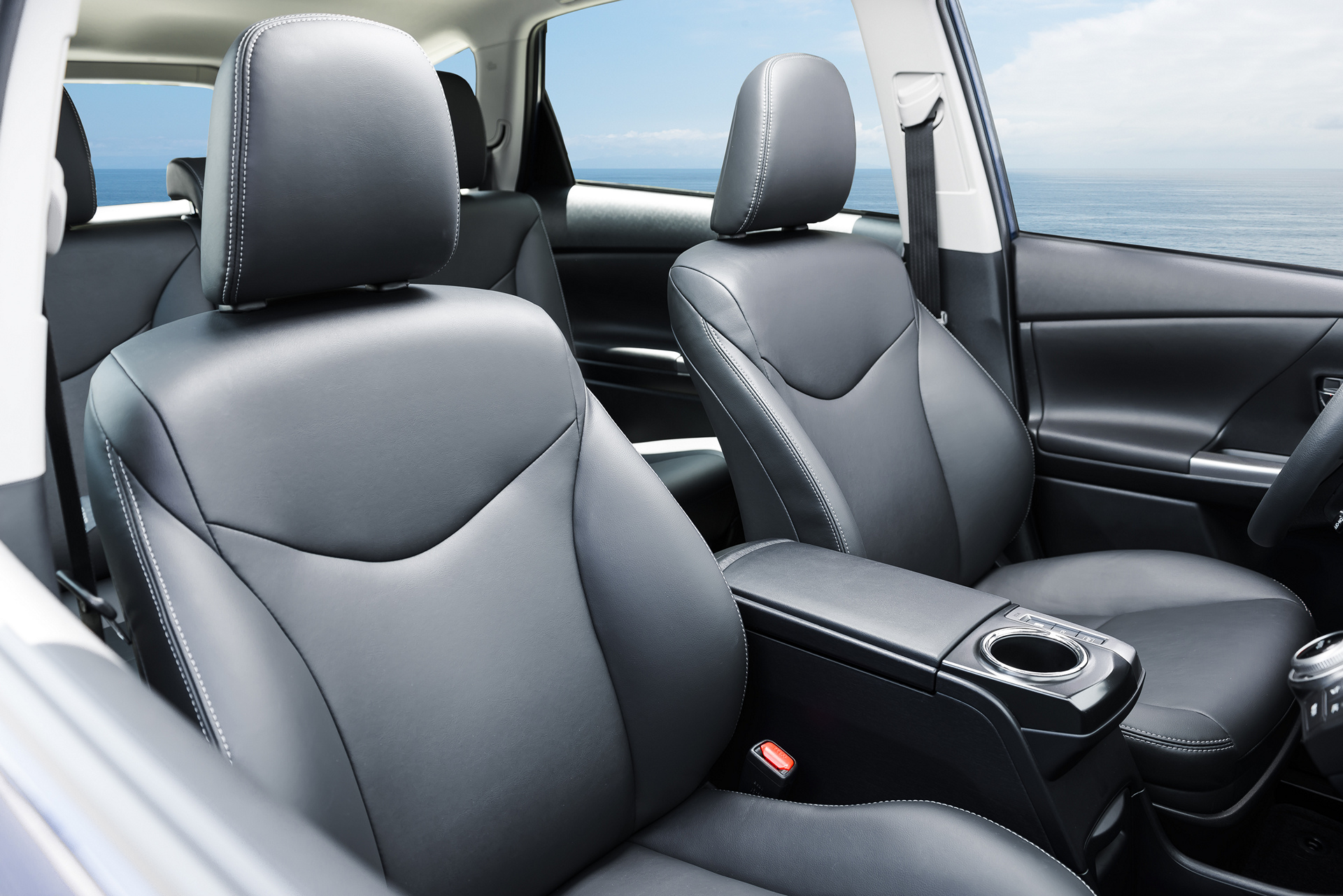 The Prius v also excels as a hauler of things, offering 34.3 cubic feet of cargo space behind the 60/40 split folding rear seats (40.2 cu. ft. with the sliding rear seats moved forward) – that’s more cargo space than most small SUV’s. Fold both and the space opens up to 67.3 cubic feet. Although there’s no woodie trim option, the Prius v’s fold-flat front passenger seat could make it an ideal surf vehicle, too. 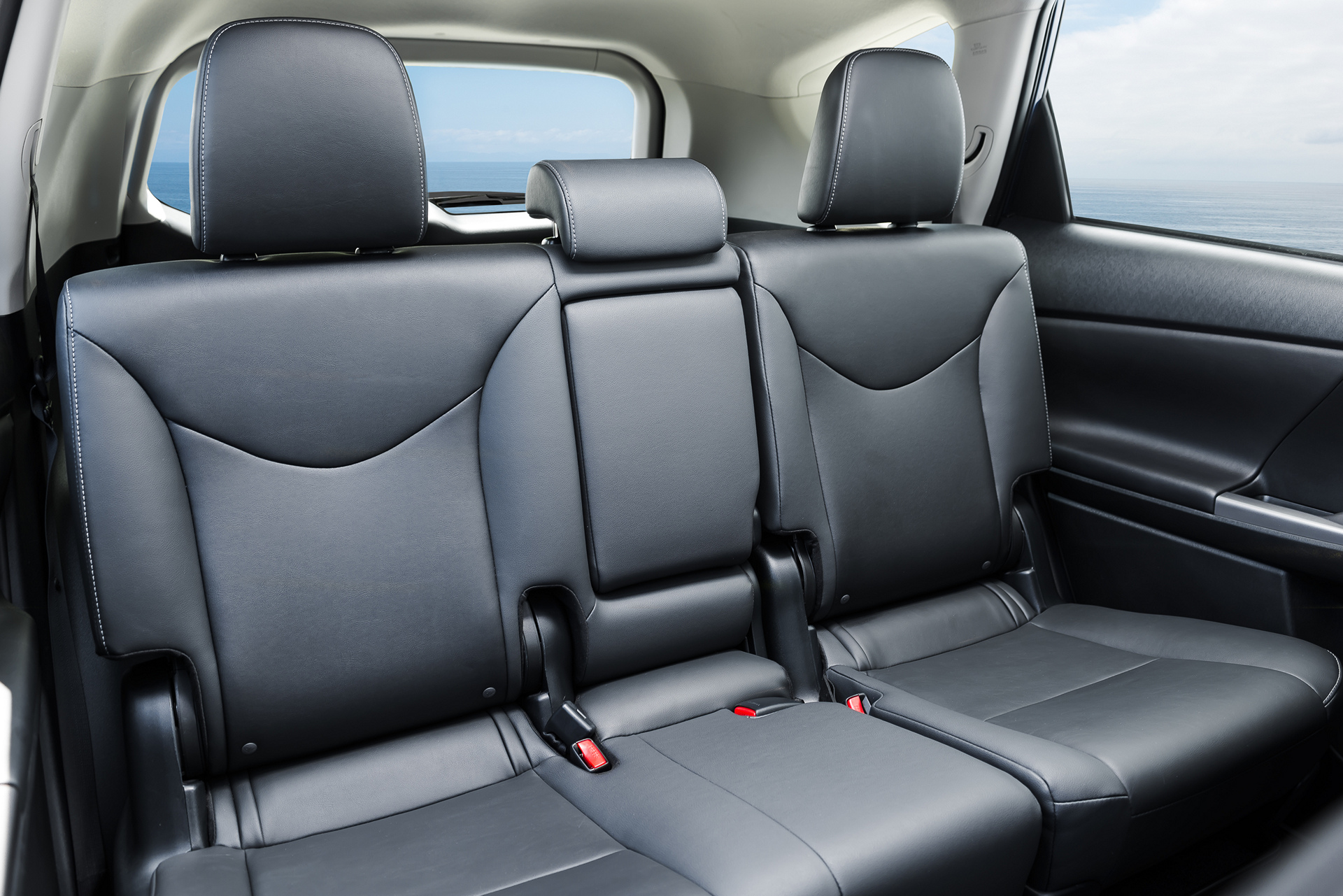 Additional storage spaces abound throughout the Prius v, including dual glove boxes. Spaces in the sides and beneath the cargo floor can keep smaller items, such as cameras and personal electronics, out of sight. Toyota even designed a special compartment under the rear seats to store umbrellas. 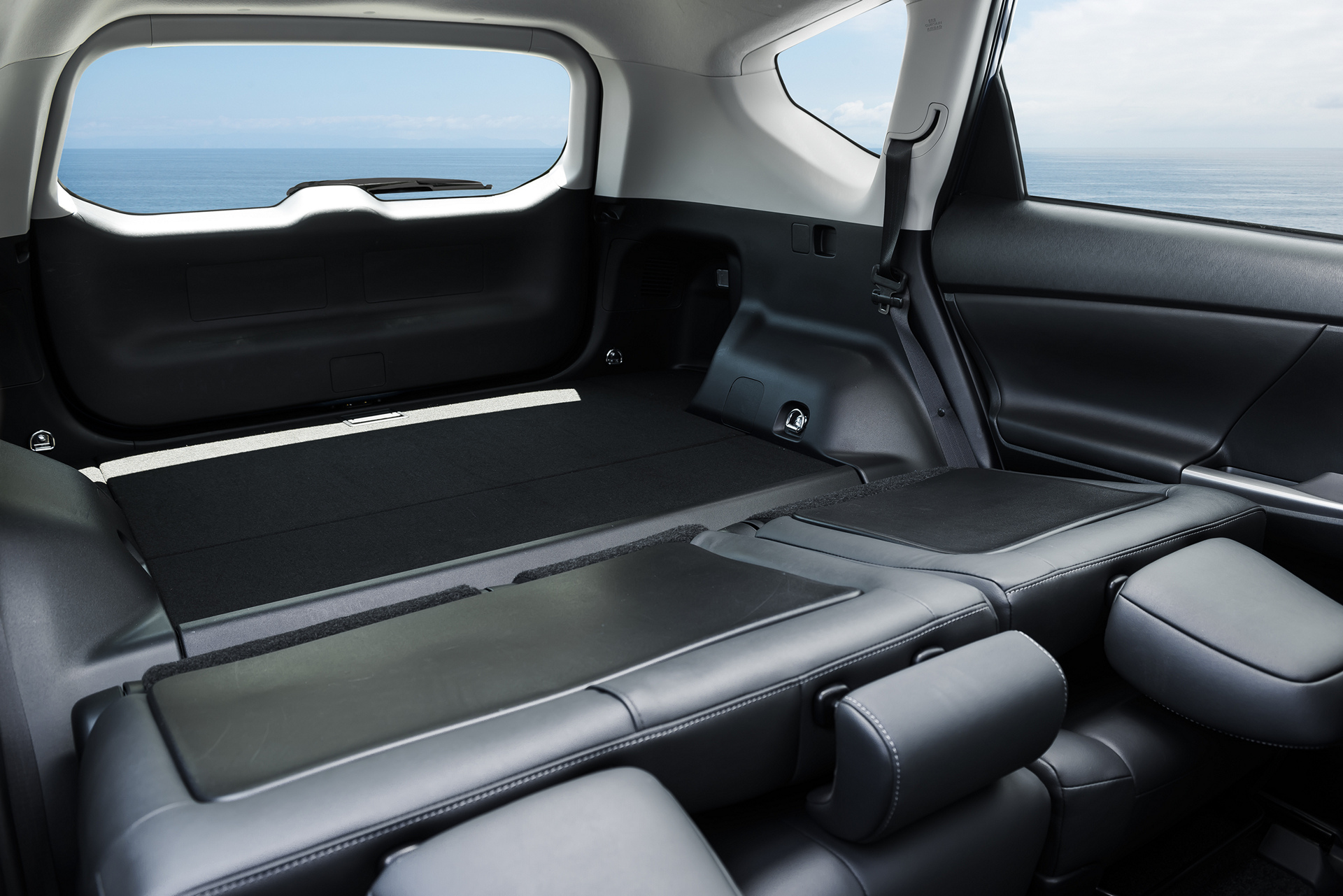 A family-friendly vehicle ought to keep all onboard comfortable while also resisting the perils of family travel, such as large drink spillage. The available SofTex seat material offers premium comfort yet resists spills and is easy to clean. And it’s part of the Prius v’s environmental story, too: the manufacturing process generates 99 percent fewer volatile organic compounds (VOCs) than production of conventional synthetic leather. 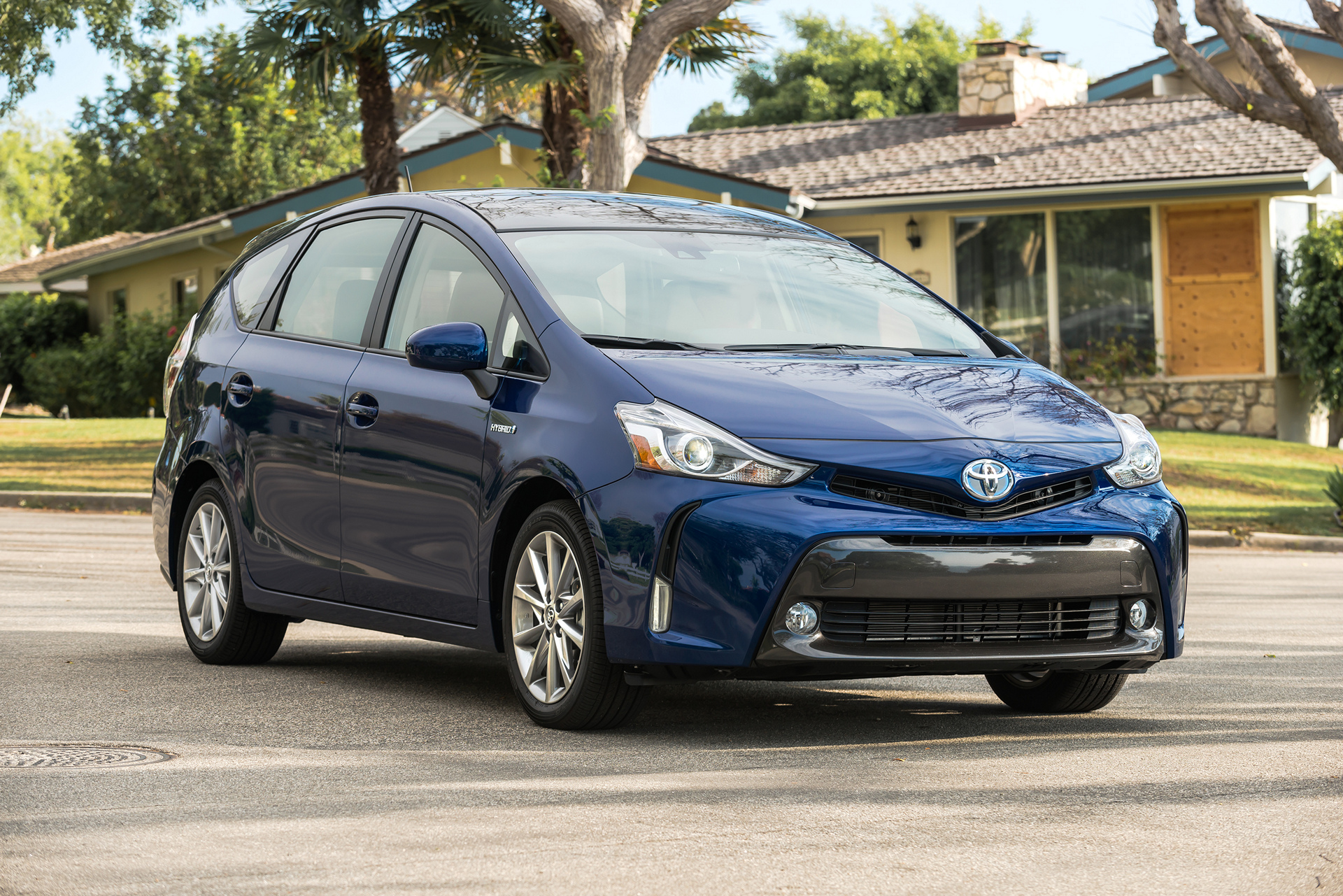 The Hybrid Synergy Drive system in the Prius v demonstrates the company’s leadership in gas/electric powertrains. Its seamless operation, proven in millions of vehicles, combines the output of a 1.8-liter Atkinson-cycle, 4-cylinder gasoline engine with a 60kw (80 hp) electric motor. This series-parallel hybrid system can provide power either from the gas engine alone, the electric motor alone, or a combination of both.

With a combined 134 system horsepower, the Prius v offers responsive everyday performance. It’s a quiet operator, and because the Prius v can run in nearly silent EV mode, it’s equipped with a Vehicle Proximity Notification System to help alert pedestrians and cyclists as the vehicle approaches.

Secrets of a Fuel Miser 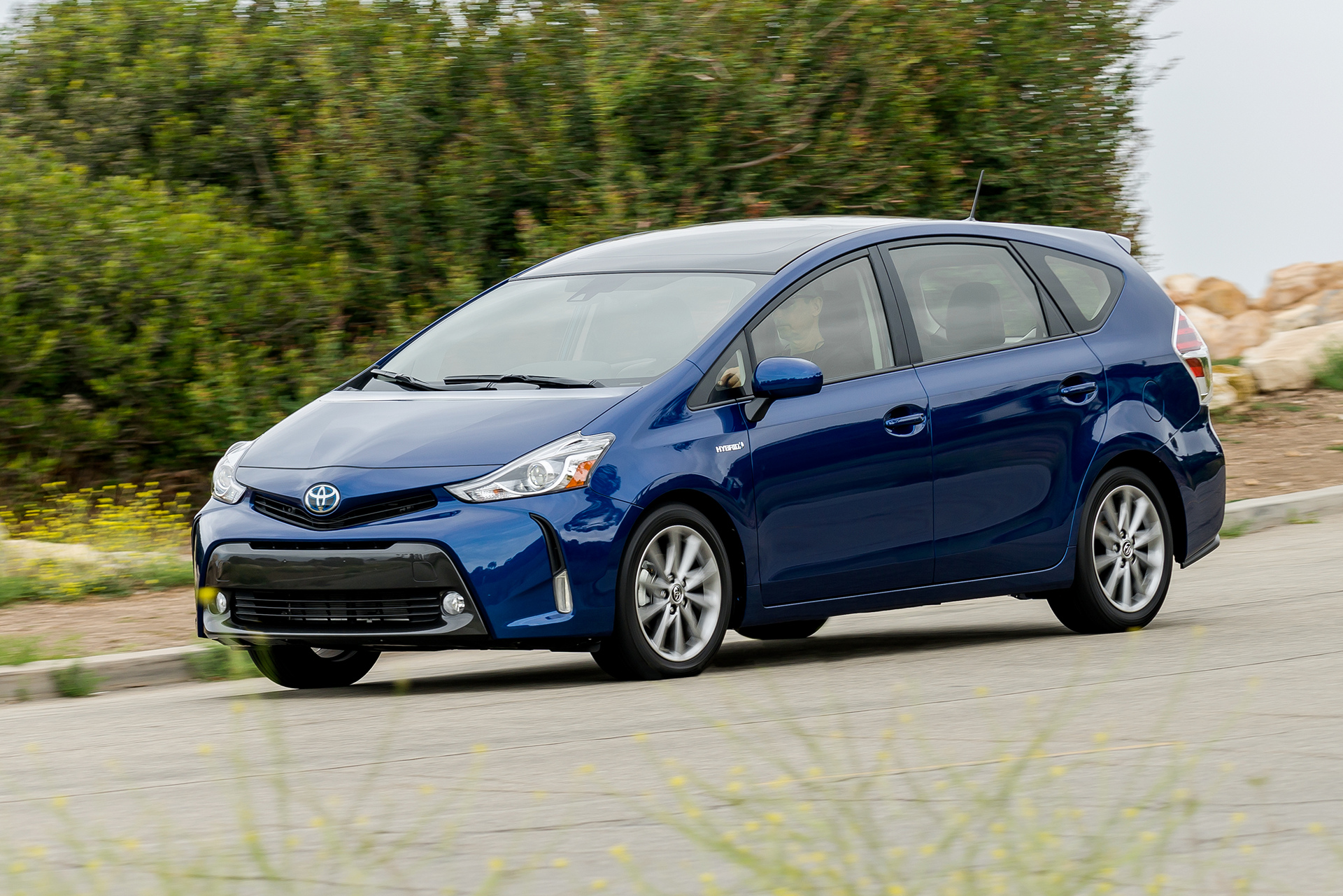 Toyota pioneered many of the technologies now used throughout the automobile industry to help enhance fuel economy, including an automatic start/stop system and regenerative braking. The latter recaptures electrical energy under deceleration and braking.

The air conditioning system uses an electric compressor, which can keep running (and keep passengers comfortable) even when the gasoline engine shuts off, as it does under certain conditions in normal driving. All trim levels use LED taillights, which reduce electric draw, and the Prius v Five grade steps up to LED headlights, as well. 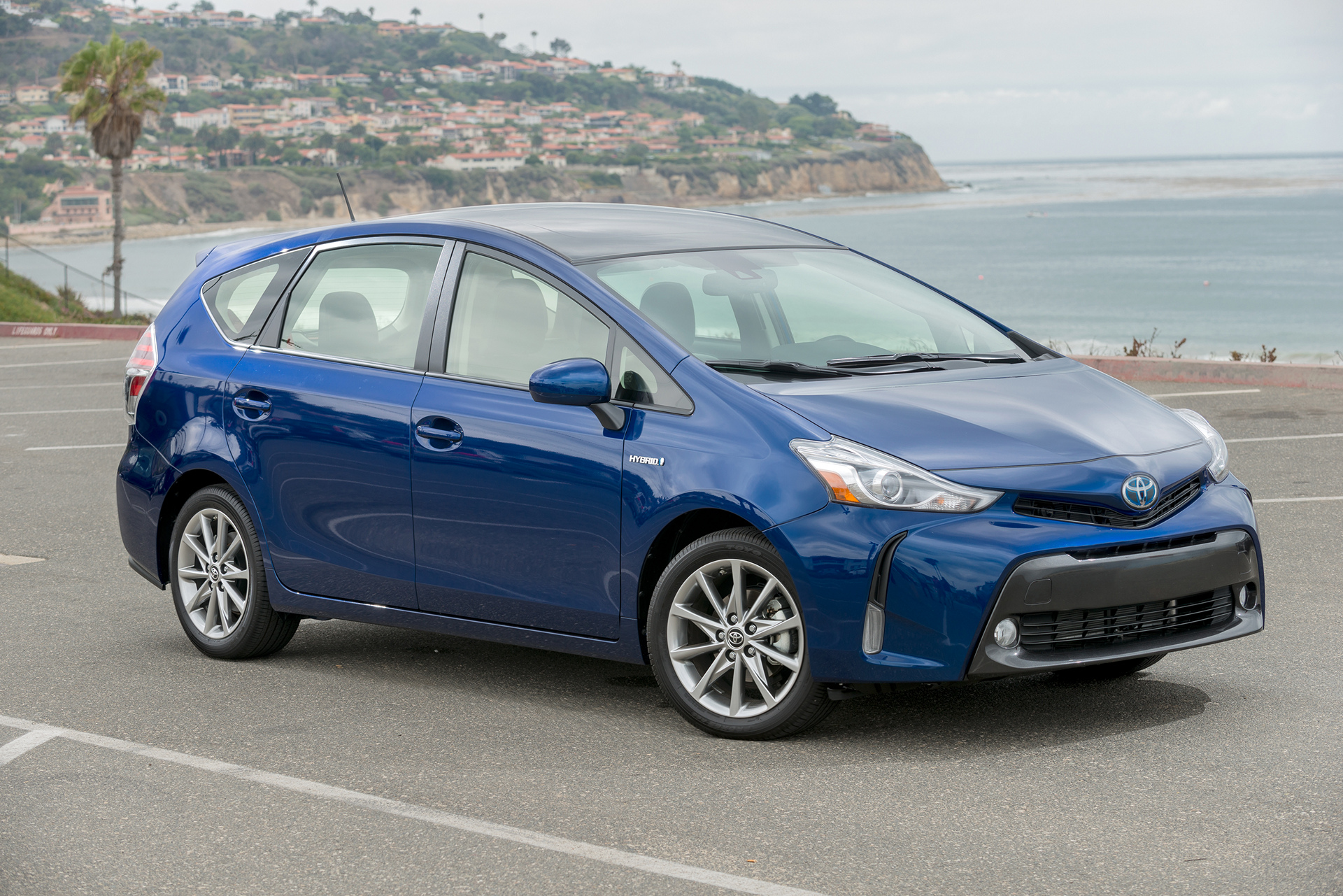 The Prius v caters to the driver, too, by offering four driving modes. Hyper-milers will appreciate the ECO and EV modes. Selecting ECO tailors the engine management system to prioritize fuel economy by managing throttle response and limiting power consumption from the air conditioning.

In EV mode, the Prius v can drive on battery power alone under certain conditions, at lower speeds, for up to about a mile. It’s suitable for crawling in urban traffic or running neighborhood errands, for example. When traffic opens up, or when encountering hilly roads, engaging POWER mode boosts mid-range response.

The longer wheelbase is one contributor to the smooth ride quality in the Prius v. Another is an innovative technology called Pitch and Bounce Control. By using the torque of the hybrid motor, this system can help to suppress certain body motions, such as oscillation over expansion strips. The Prius v Two, Three and Four trim levels feature standard 16-inch alloy wheels, while the top-line Prius v Five comes exclusively with 17-inch alloy wheels. 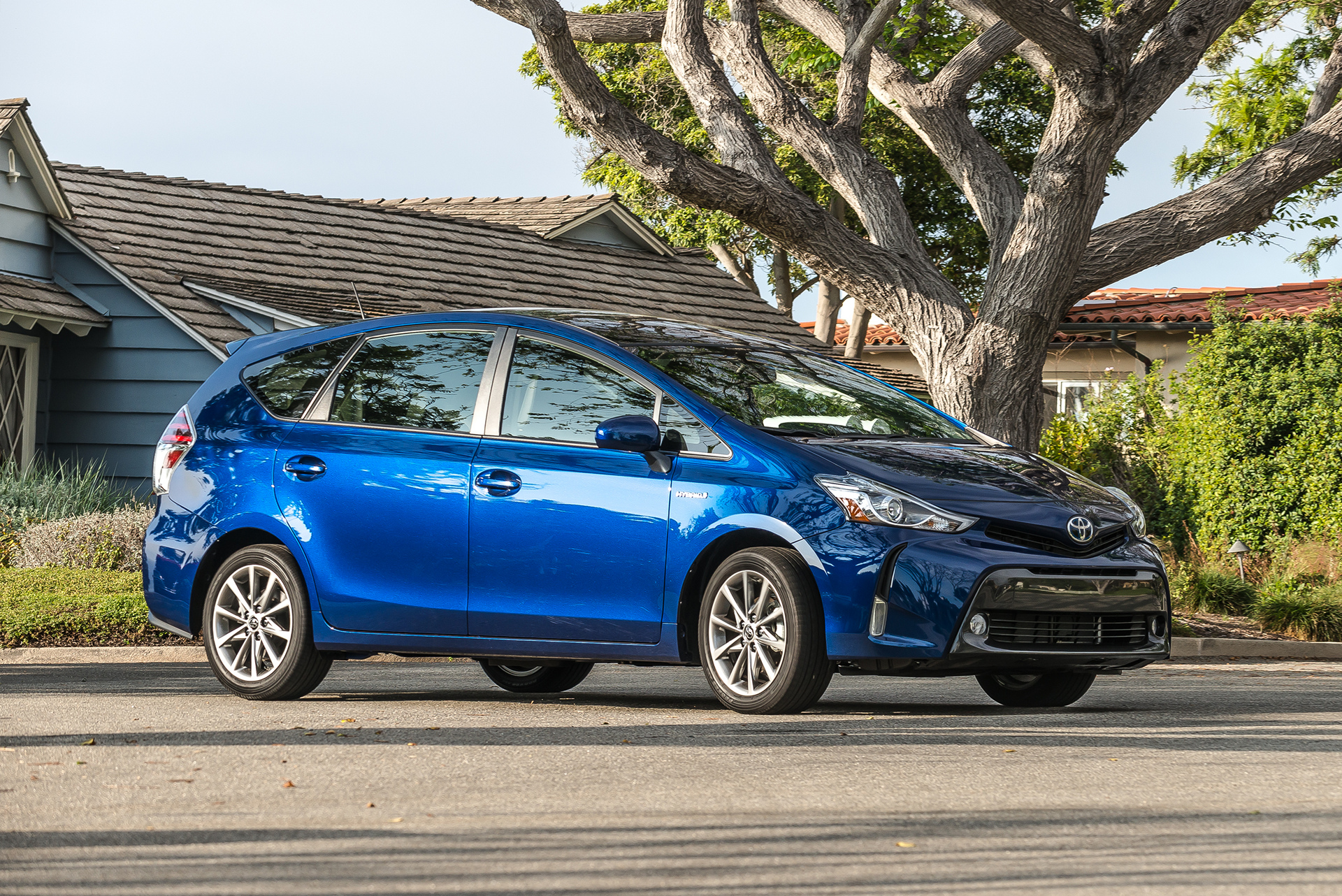 A force-absorbing body structure, which features extensive use of high-strength steel, helps form the foundation for occupant safety in the Prius v. Passenger protection includes seven SRS airbags: dual front airbags, front seat side airbags, curtain side airbags for both rows, and a knee airbag for the driver. The front seat design helps lessen the possibility of whiplash injury during certain types of severe rear end collisions.

Available lane Departure Alert can, in certain conditions, read lane markings and provide audible and visual alerts when a lane departure without turn signal is detected. In the event of a collision, the available Safety Connect system can access a call center with a live operator who can dispatch police and emergency vehicles. The system offers automatic collision notification and a stolen vehicle locator feature, as well. 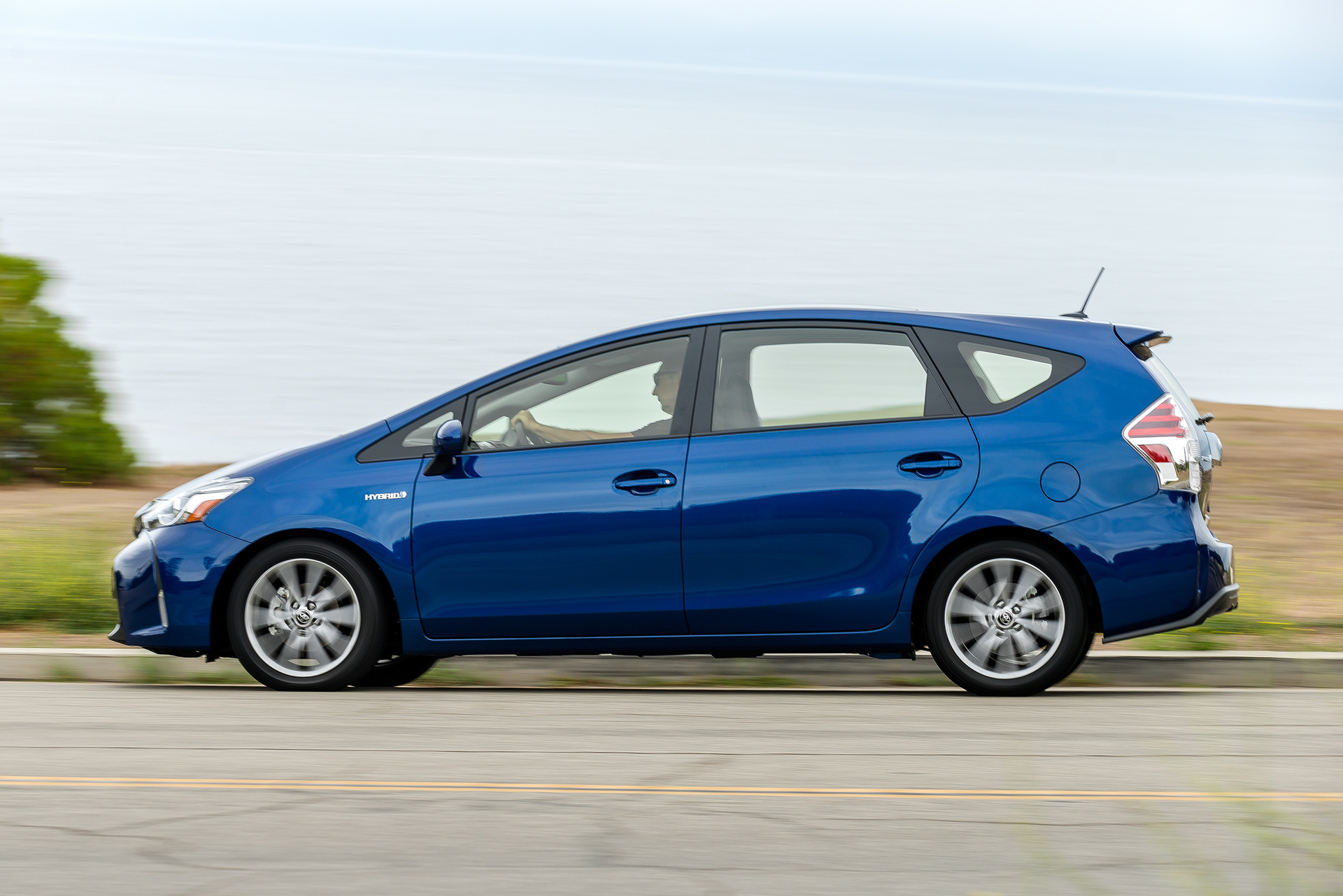 Instantly recognizable as a Prius, the larger Prius v shares its siblings’ disdain for wind resistance. Its sleek profile and myriad aero details (such as fins on the headlights to keep wind off the side mirrors) contribute to a low 0.29 coefficient of drag. Reducing wind drag helps to reduce both fuel usage and noise.

A base curb weight of 3,340 lbs. would put the Prius v again on par with midsize sedans, yet lighter than many compact SUVs. Credit Toyota’s use of lightweight materials, including high-tensile grades of steel throughout the body along with aluminum in key body panels and systems.

Adding options doesn’t have to mean packing on the pounds, either. The available resin Panoramic View Moonroof was a Toyota first that’s 40-percent lighter than a conventional glass roof of similar size. It comes with the luxury of power retractable sunshades and its heat insulation properties help to reduce the load on the vehicle’s climate control system.

Are We There Yet? Ask Siri® 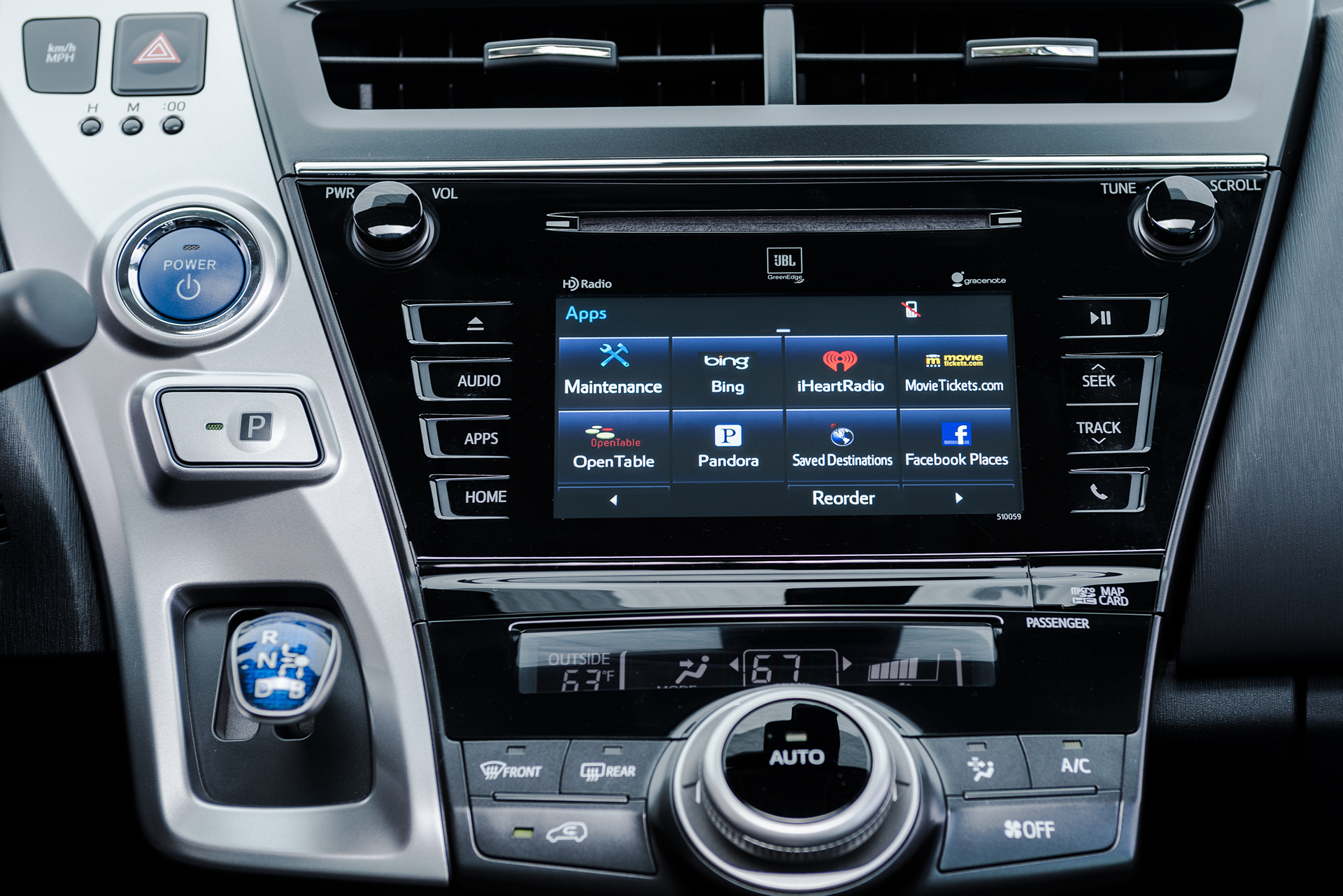 Toyota has both expanded multimedia capability in the 2017 Prius v and made it easier than ever to use, with a focus on keeping focused on driving. The upgraded Entune Audio head unit incorporates voice recognition and Apple Siri® Eyes-Free capability. So now, you can operate many of the vehicle’s multimedia functions with voice commands. Apple iPhone® users can in addition get navigation and other assistance just by asking Siri. If you ask Siri, “Are we there yet?” she’ll tell you precisely how much longer the trip will take.

The standard Entune™ audio system uses a 6.1-inch screen and includes six speakers. The screen is multi-talented, providing an engaging monitor for the Hybrid Synergy Drive’s energy usage and fuel consumption, navigation (when equipped) and as the monitor for the standard back-up camera.

The JBL GreenEdge™ audio system combines an eight-channel amplifier and door-mounted “acoustic lens” speakers to provide high-quality sound. The GreenEdge amplifier is lighter and more efficient than other amps of similar output, drawing less energy than conventional systems and speakers. 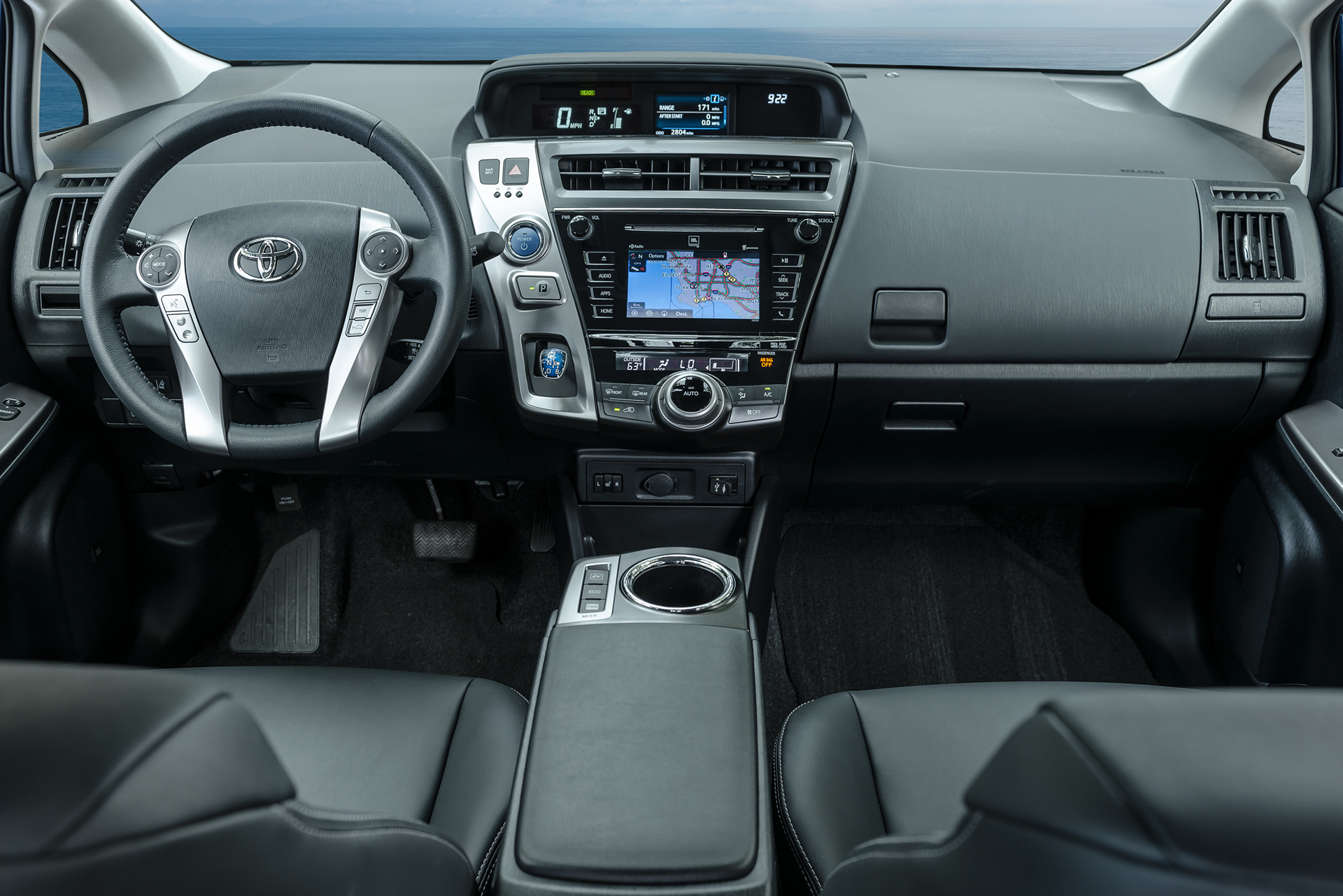 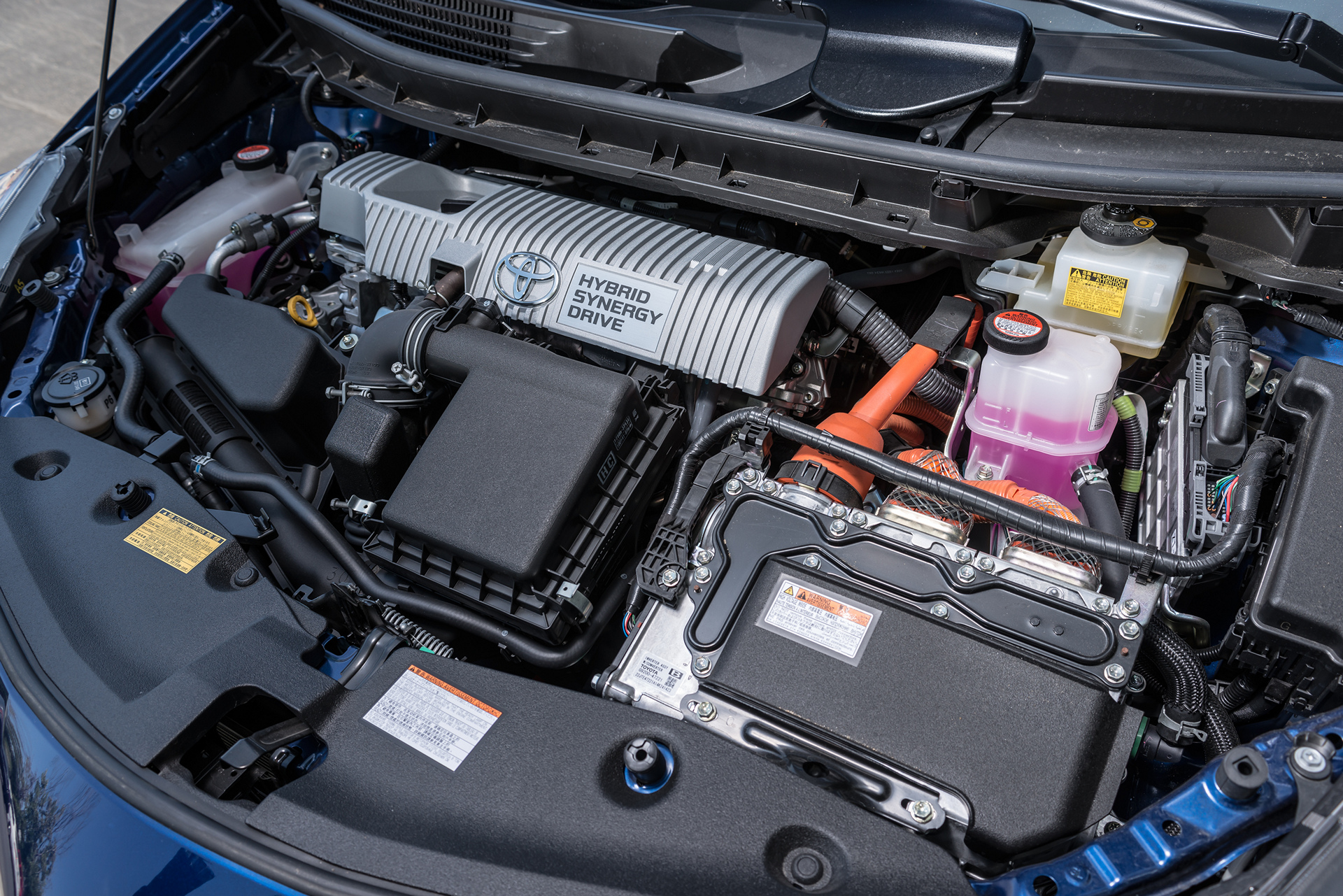 Toyota’s 36-month/36,000 mile basic new-vehicle warranty applies to all components other than normal wear and maintenance items. Additional 60-month warranties cover the powertrain for 60,000 miles and against corrosion with no mileage limitation. The hybrid-related components, including the HV battery, battery control module, hybrid control module and inverter with converter, are covered for eight years/100,000 miles. In applicable states, hybrid-related component coverage is 15 years/150,000 miles with the exception of the hybrid battery, which is covered for 10 years/150,000 miles.