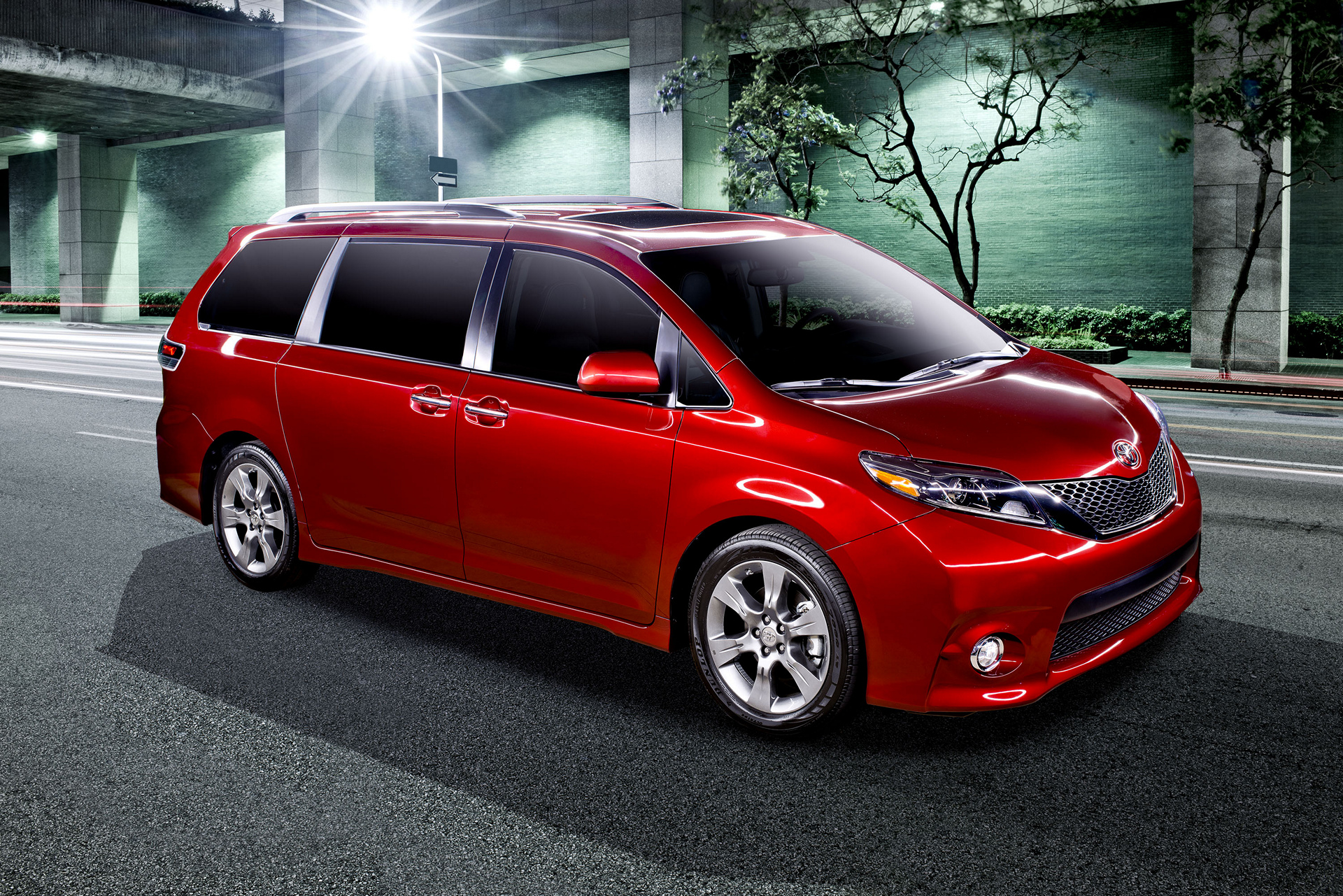 The family van can rock, at least if it’s from Toyota. The Sienna, which has already pushed the boundaries of minivan-ness with its sporty SE trim and “Swagger Wagon” persona, gets yet another injection of peppiness and efficiency in the form of an all-new direct-injection V6 engine and Direct Shift – 8AT, 8-speed automatic transmission. The new-for-2017 upgrades improve the original “Swagger Wagon’s” comfort, performance, and fuel efficiency. 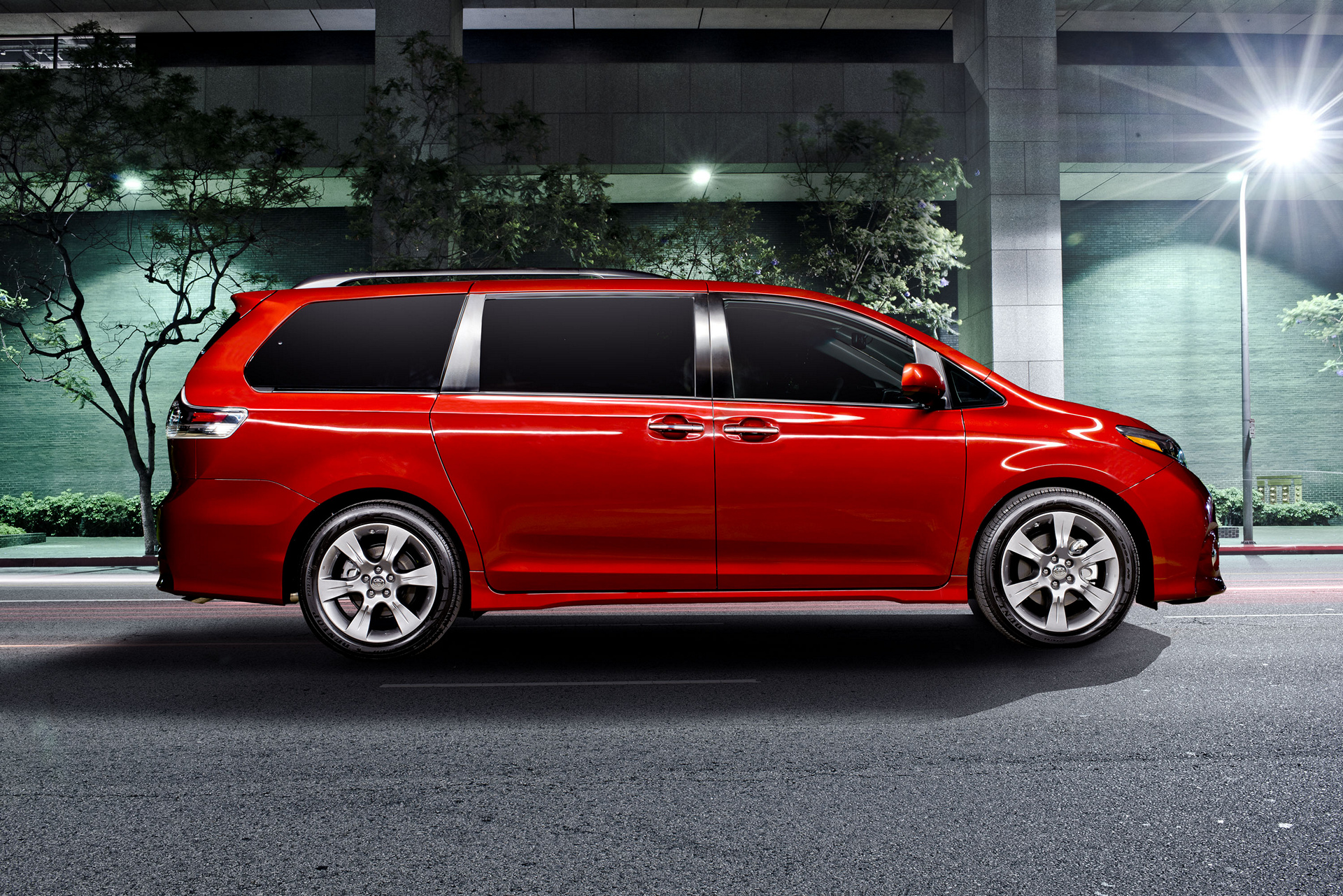 Of course, the Sienna remains ever the family-friendly van, with the choice of 7- or 8-seat cabin configurations, up to a massive 150 cu. ft. of carrying space, and a comprehensive array of available multi-media systems. It continues to be available in five grades: L, LE, SE, XLE and Limited. Toyota Mobility also offers the LE and XLE with an Auto Access Seat having a 330-lb. lift capacity. The Sienna is still the only van in the segment offering available all-wheel drive.

Power to the Van People 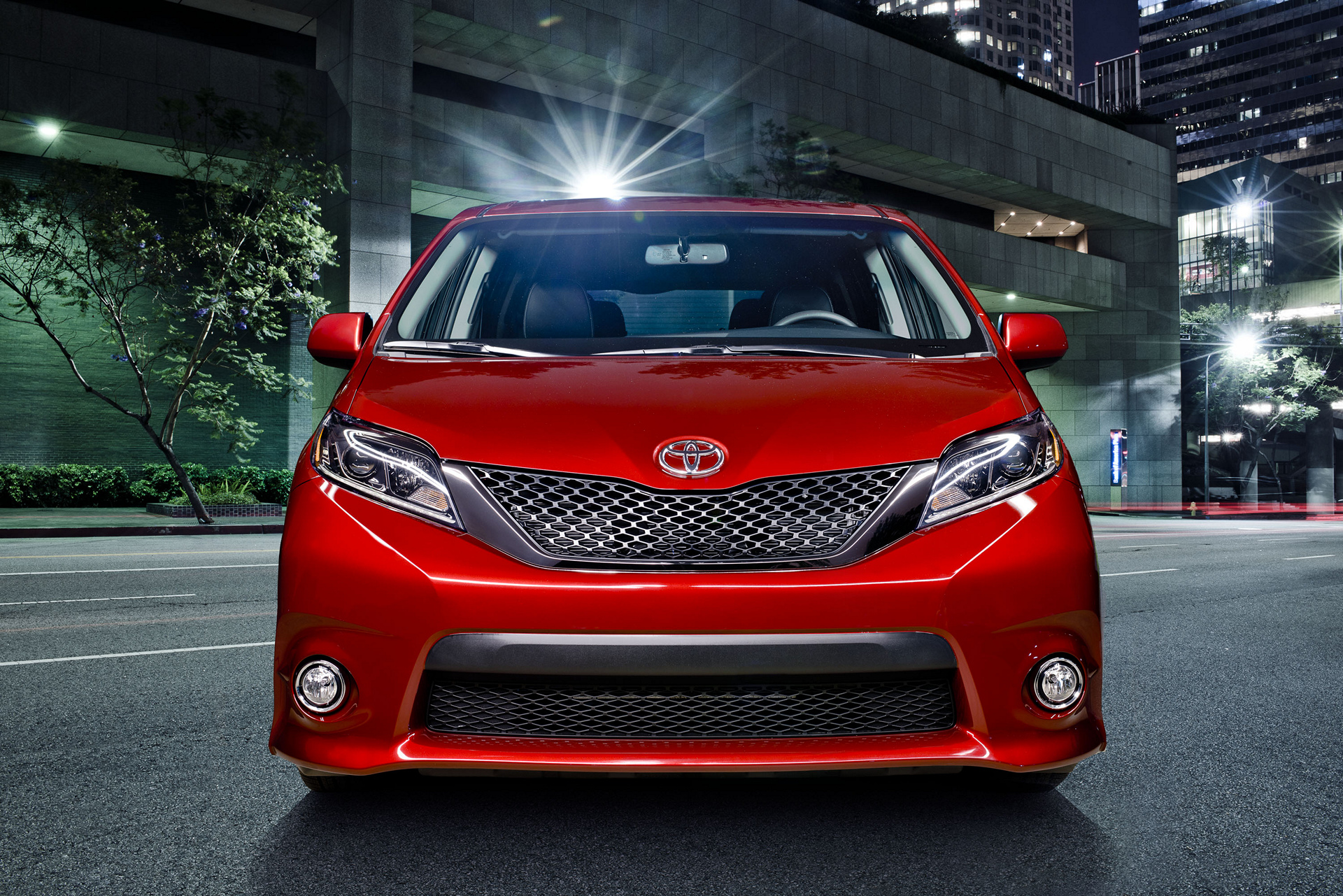 The Sienna now delivers a higher dose of driving fun in all situations and environments. Its new 3.5-liter V6 produces 296 horsepower and 263 lb.-ft. of torque, which represent increases of 30 horsepower and 18 pound-feet, respectively, over the 2016 Sienna. In perfect partnership with the transmission’s eight ratios, the new V6 bestows the Sienna with quicker acceleration and stronger passing performance. 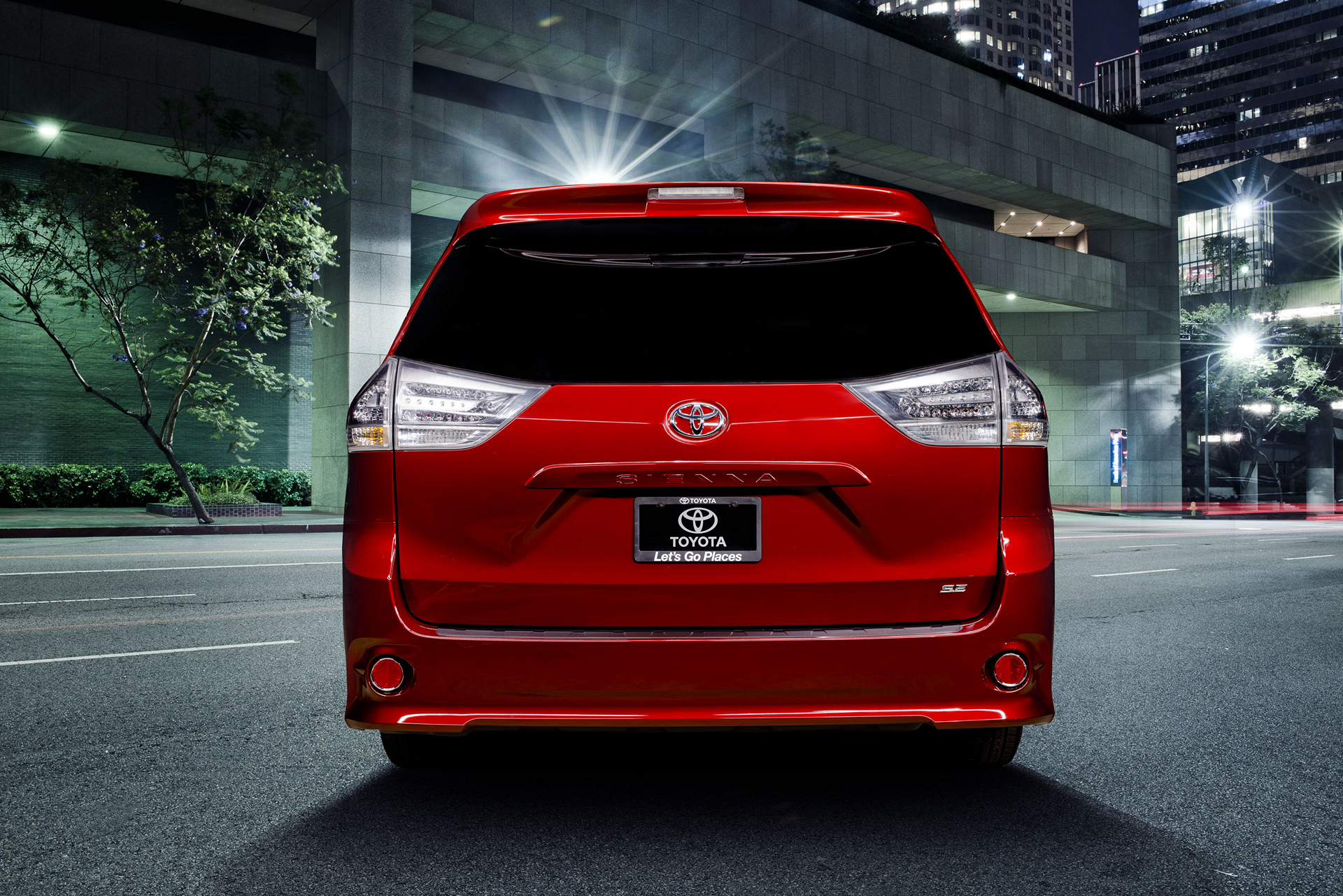 The new transmission was developed as part of the Toyota New Global Architecture (TNGA), a wide-ranging design, engineering and manufacturing initiative to optimize all aspects of vehicle performance and fuel efficiency. The revised transmission incorporates new advances to expand lock-up range and enhance efficiency. Combined with enhancements from the new 3.5L engine, it is anticipated to receive higher fuel economy ratings of 19/27 MPG on the city/highway cycles for front-wheel drive variants, up from the outgoing edition’s estimated 18/25 miles-per-gallon. 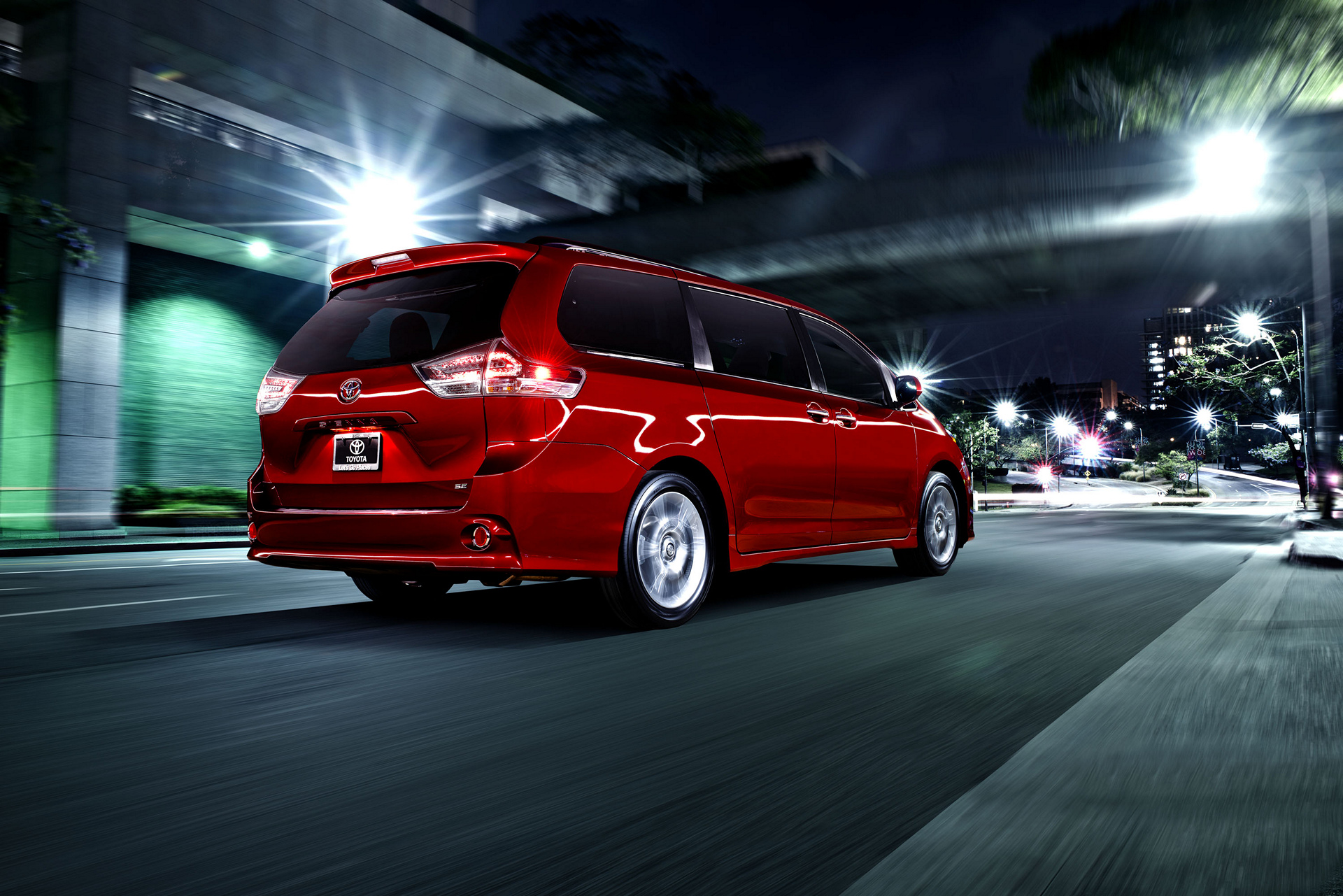 All-wheel drive with active torque control is available for the LE, XLE and Limited, providing an important all-weather traction advantage that is not found in any other family van. The standard Tow Prep Package allows the Sienna to pull a 3,500-pound-max load. 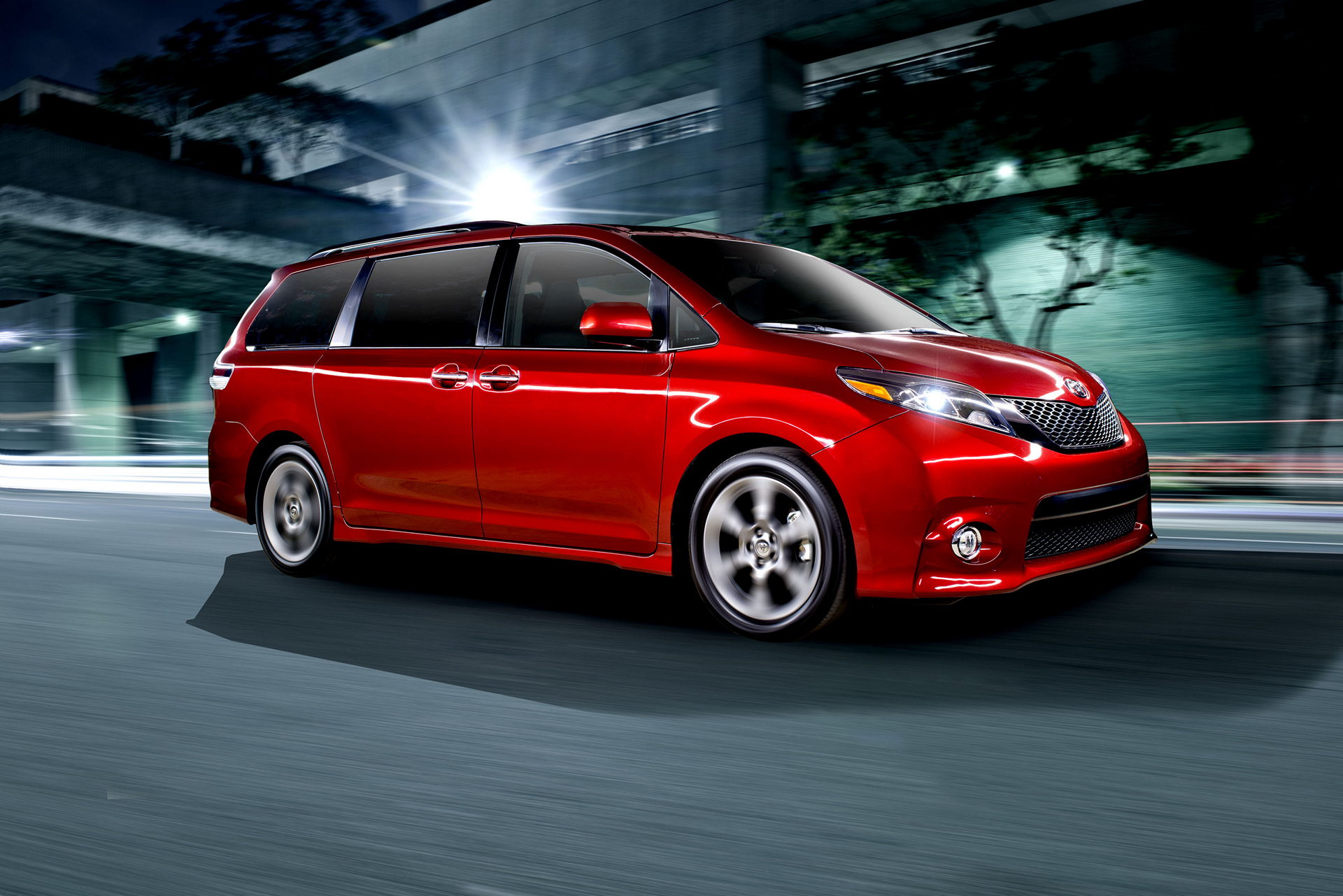 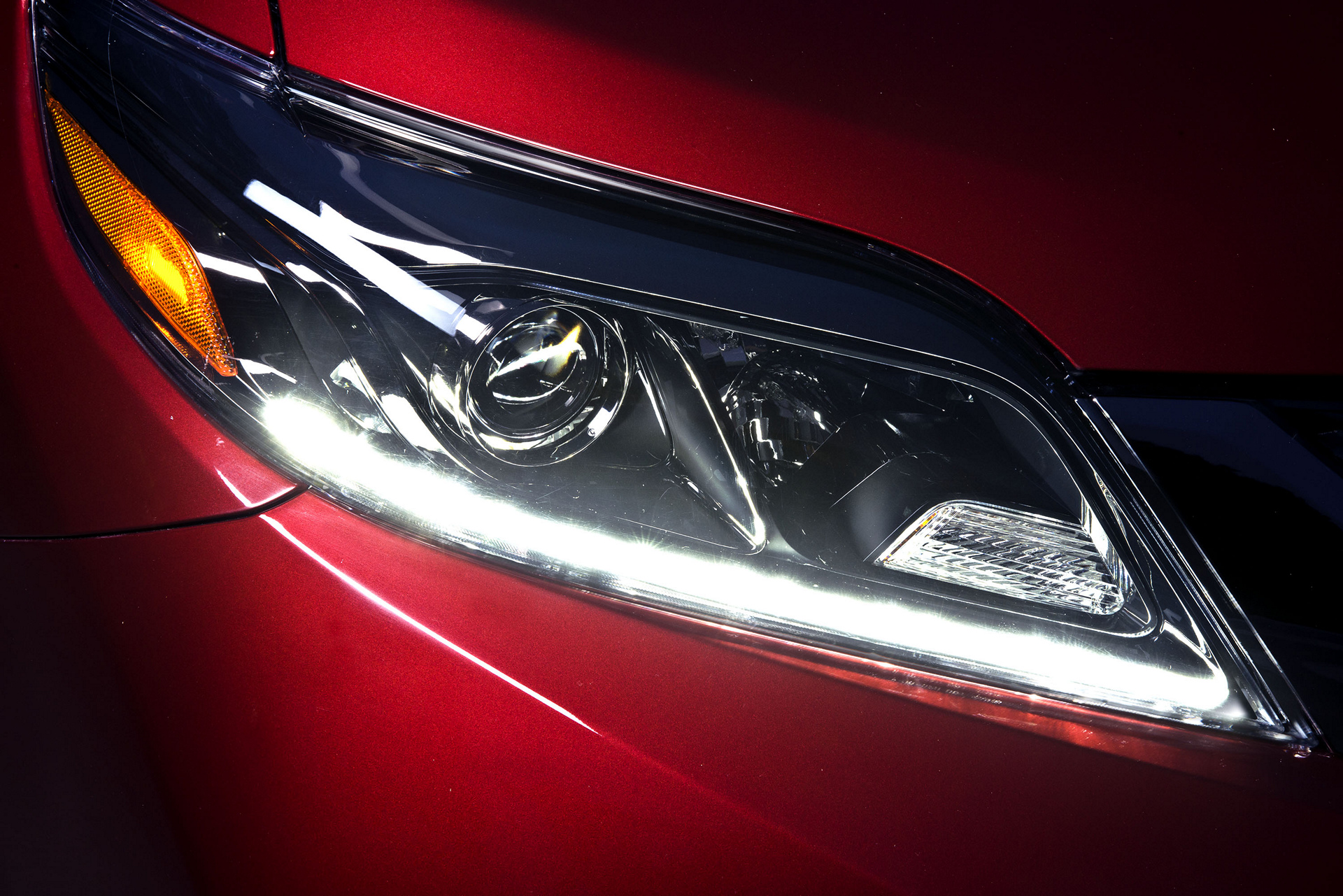 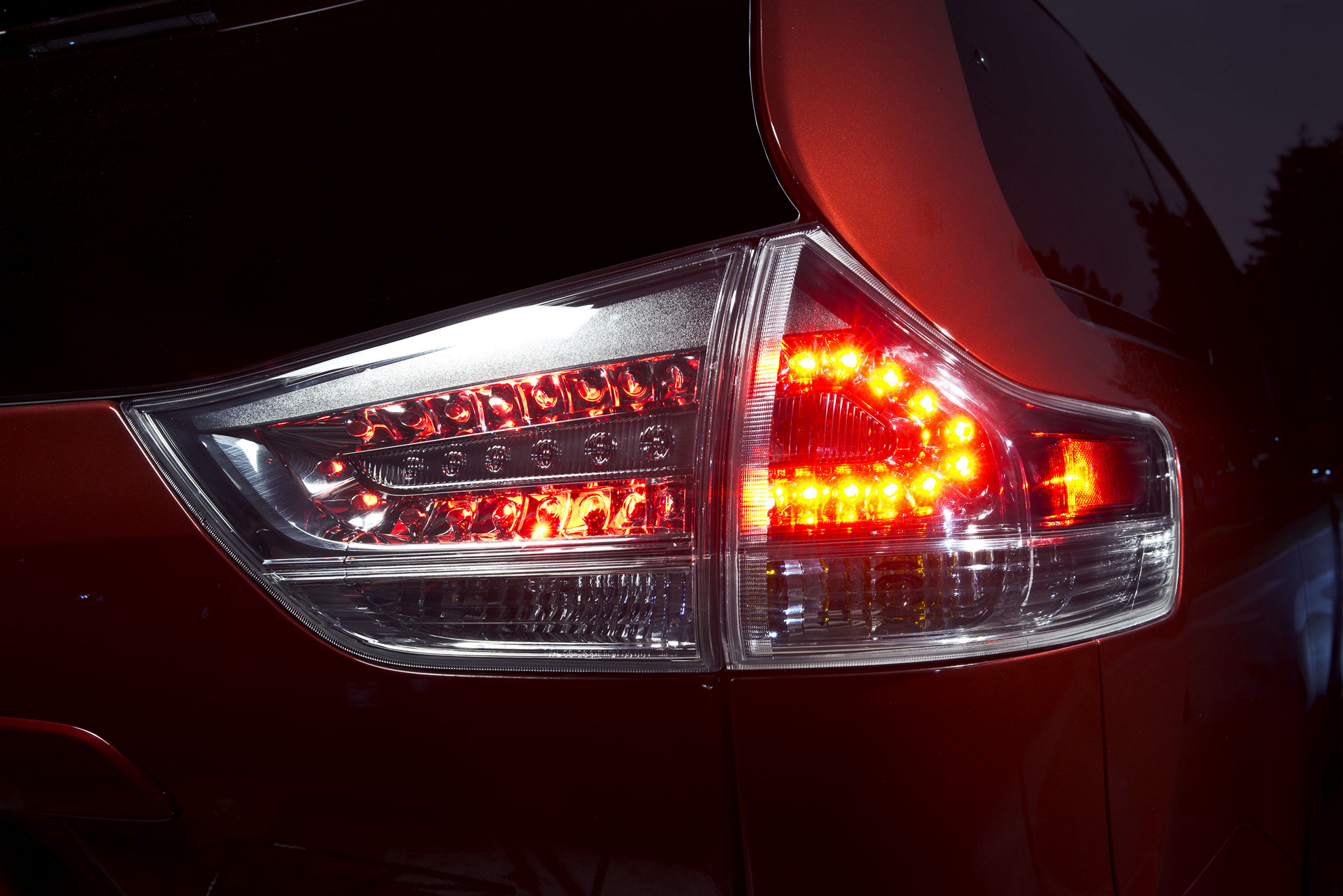 Upping the Sienna’s status as a “sleeper” is the SE, a trim that brings stylish projector-beam headlights, LED daytime running lamps (DRL), sculpted side skirts, and smoke-look trim to the Sienna formula. Its sportiness goes beyond just looks, though: it rides atop a sport-tuned suspension and exclusive 19-inch wheels and tires. 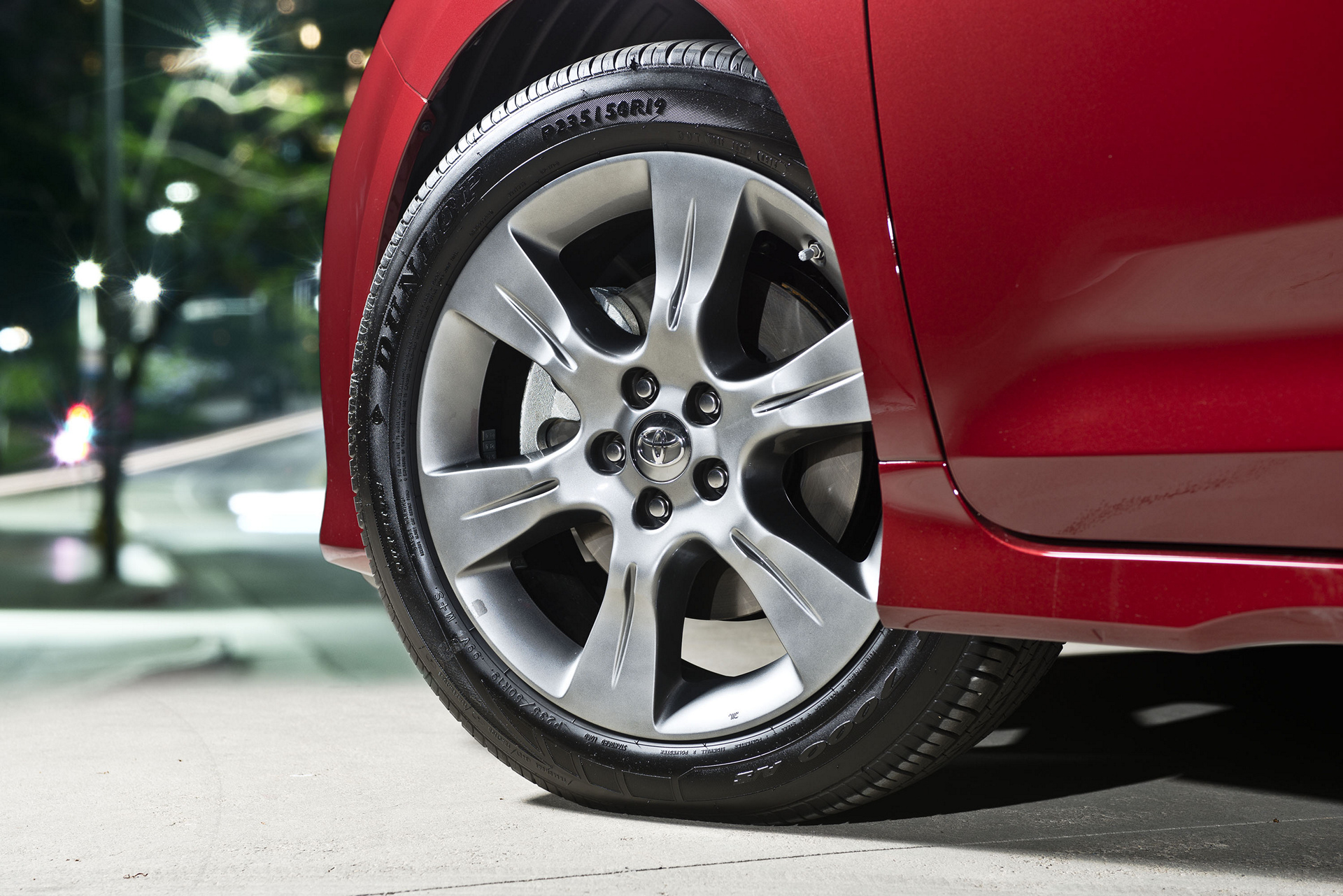 The combination of sportier underpinnings and footwear sharpens the 8-passenger van’s handling on twisty roads. Inside, trim-specific instrumentation and heated and powered front leather-trimmed seats with white stitching complete the SE’s impressive list of unique traits. 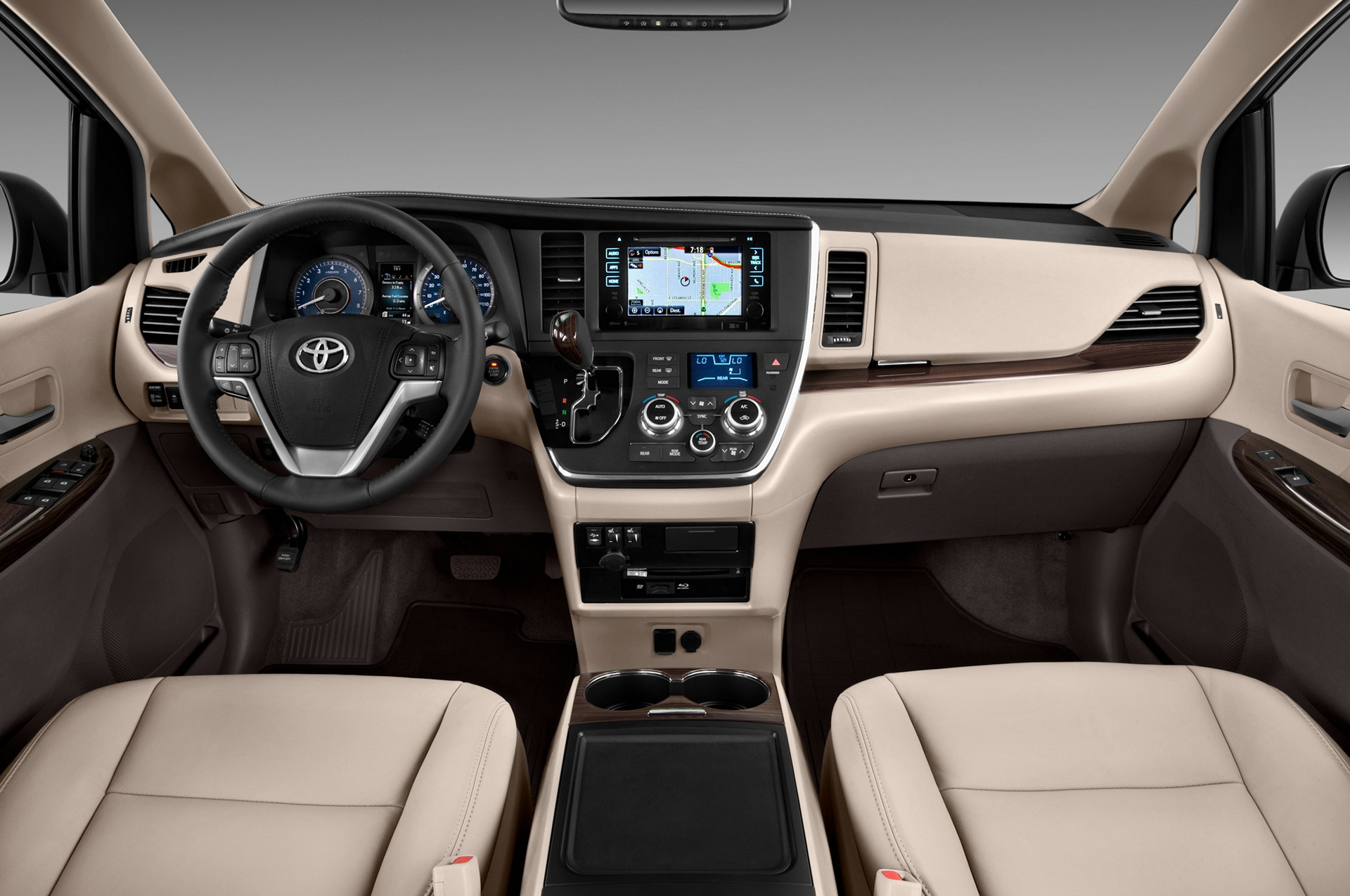 Luckily, the nice dose of newfound power has not affected the 2017 Toyota Sienna. It carries on as a highly effective people-mover, offering an expansive cabin that’s comfortable for up to eight passengers (or seven with the available second-row captain’s chair seating). Stow the Sienna’s third row seats and remove the second row to discover up to 150 cubic feet of available cargo space, all easily accessible from the wide, dual sliding doors and broad tailgate (all available with power operation). The Sienna can even carry a 4-ft. by 8-ft. sheets of plywood should weekend plans include, say, building a tree house. 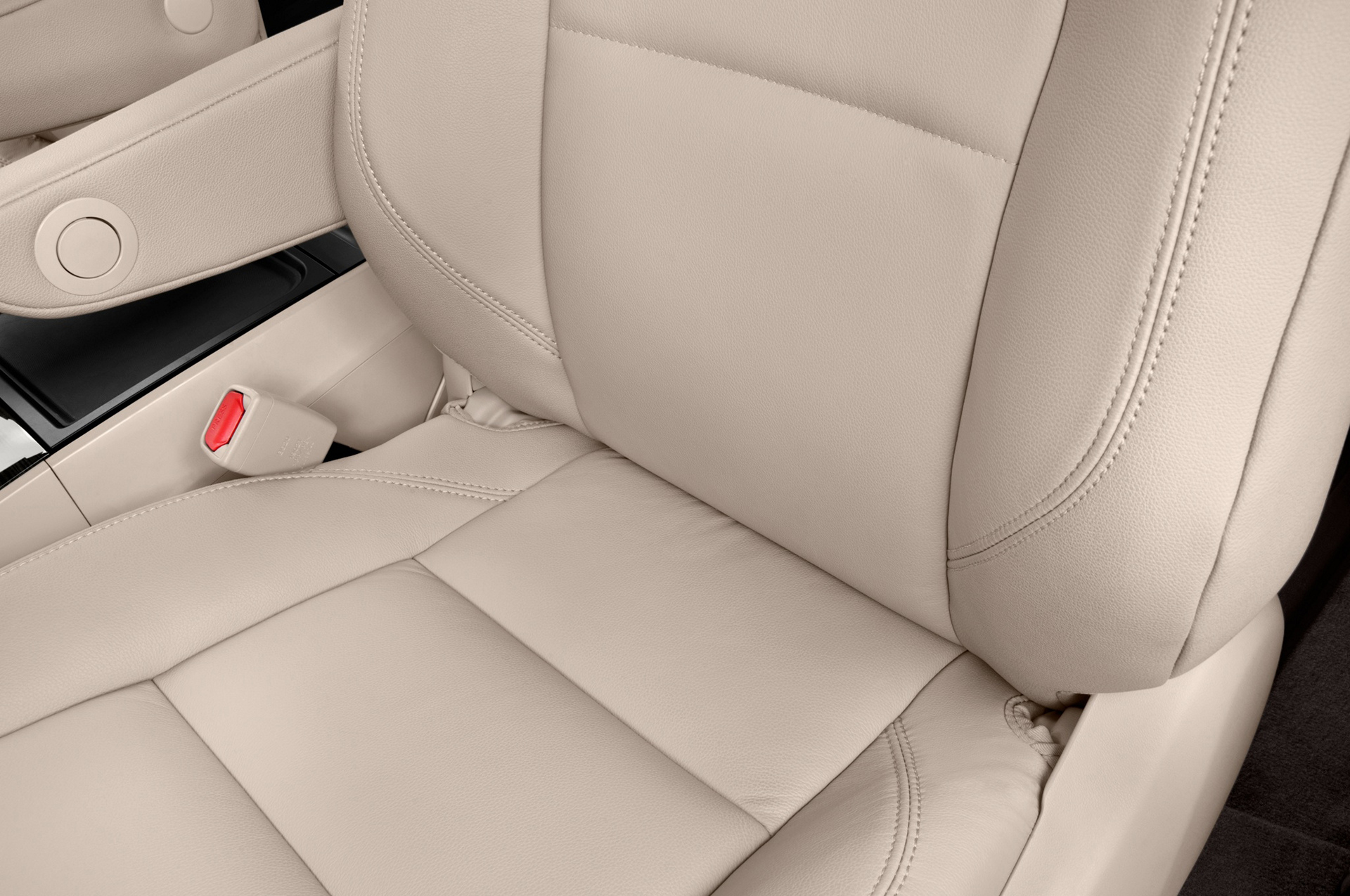 The seven-seat configuration can turn the Sienna into a pseudo limousine, thanks to second-row captain’s chairs that slide 23 inches rearward to reveal an enormous amount of legroom. Or, if little kiddos are riding along, drivers can position the second row of seats closer to the first row to ease their access to child passengers. The Sienna is equipped with four LATCH locations for securing child seats. 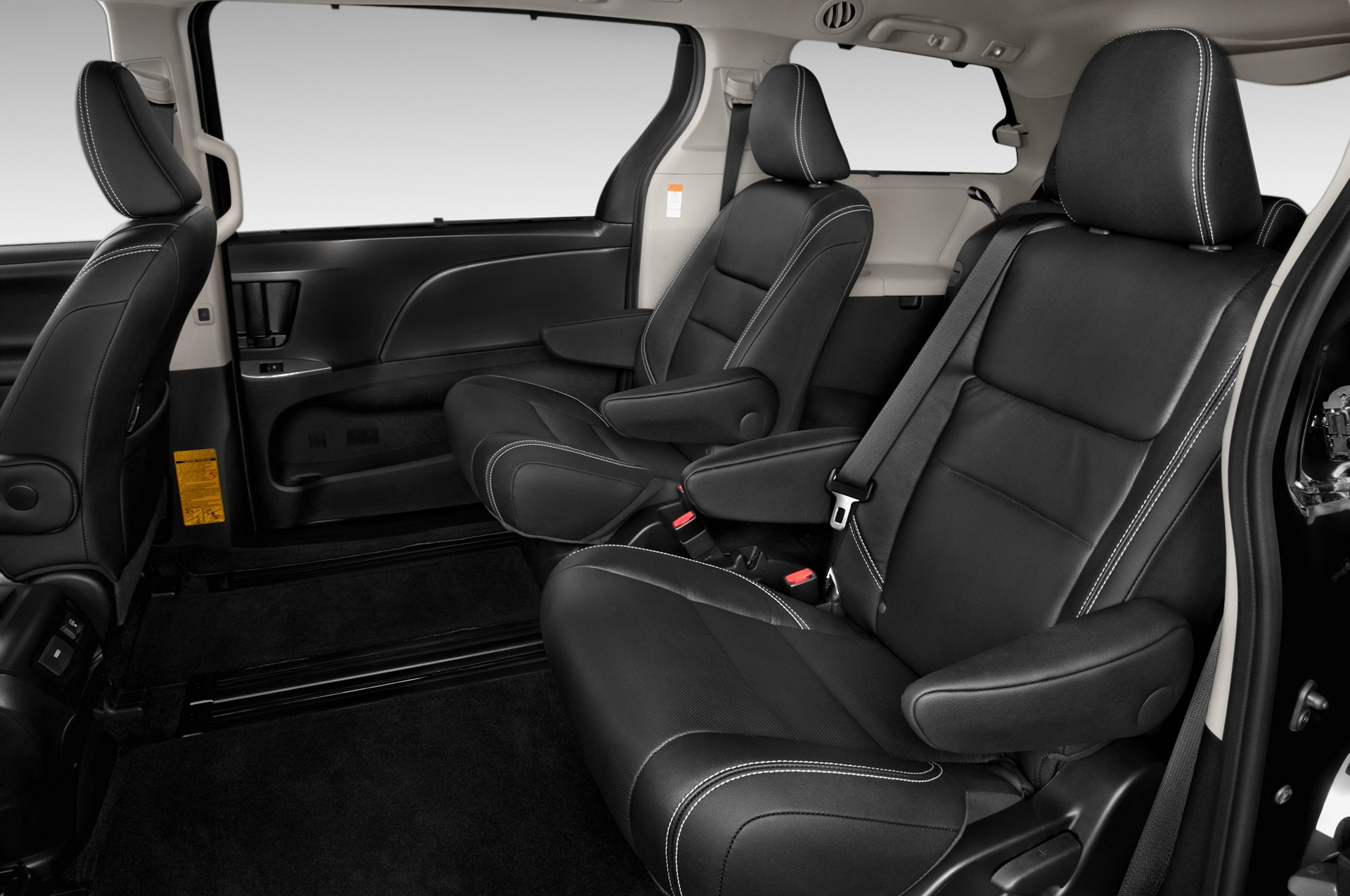 The Sienna Limited FWD’s standard second-row is made up of twin lounge seat captain’s chairs covered in premium leather-trim. The seats feature dual armrests, leg and foot support, and an easy-release mechanism when seat removal or repositioning is desired. Also on the front wheel-drive Limited is a sliding center console that is accessible to both front seats and second-row passengers. 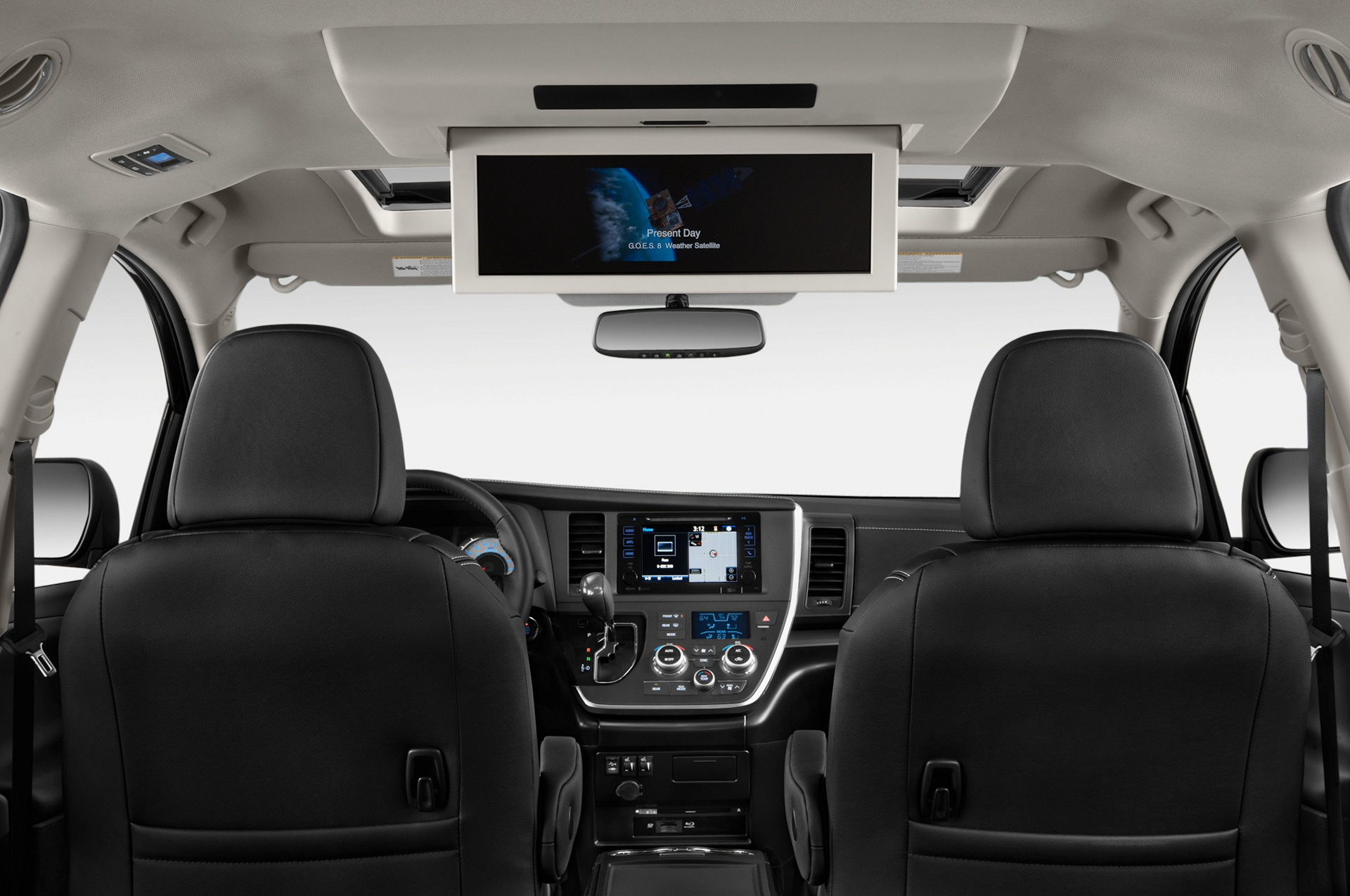 On eight-passenger models, the second-row center seat can be removed and stowed in the left side of the rear-storage area, leaving a cupholder and storage tray between the two remaining seats. With the Tip Up and Long Slide feature, the seats can be easily moved forward and back on extended rails, adjusting room as needed for passengers or cargo. Sliding the second-row seats all the way to the rear creates a walk-in aisle, making it easier to enter, exit, install a child seat, or place a child in a seat. Regardless of cabin configuration, all second-row seats provide easy access to the third-row. Storage bins, spaces, and cupholders abound are offered on every Sienna grade. 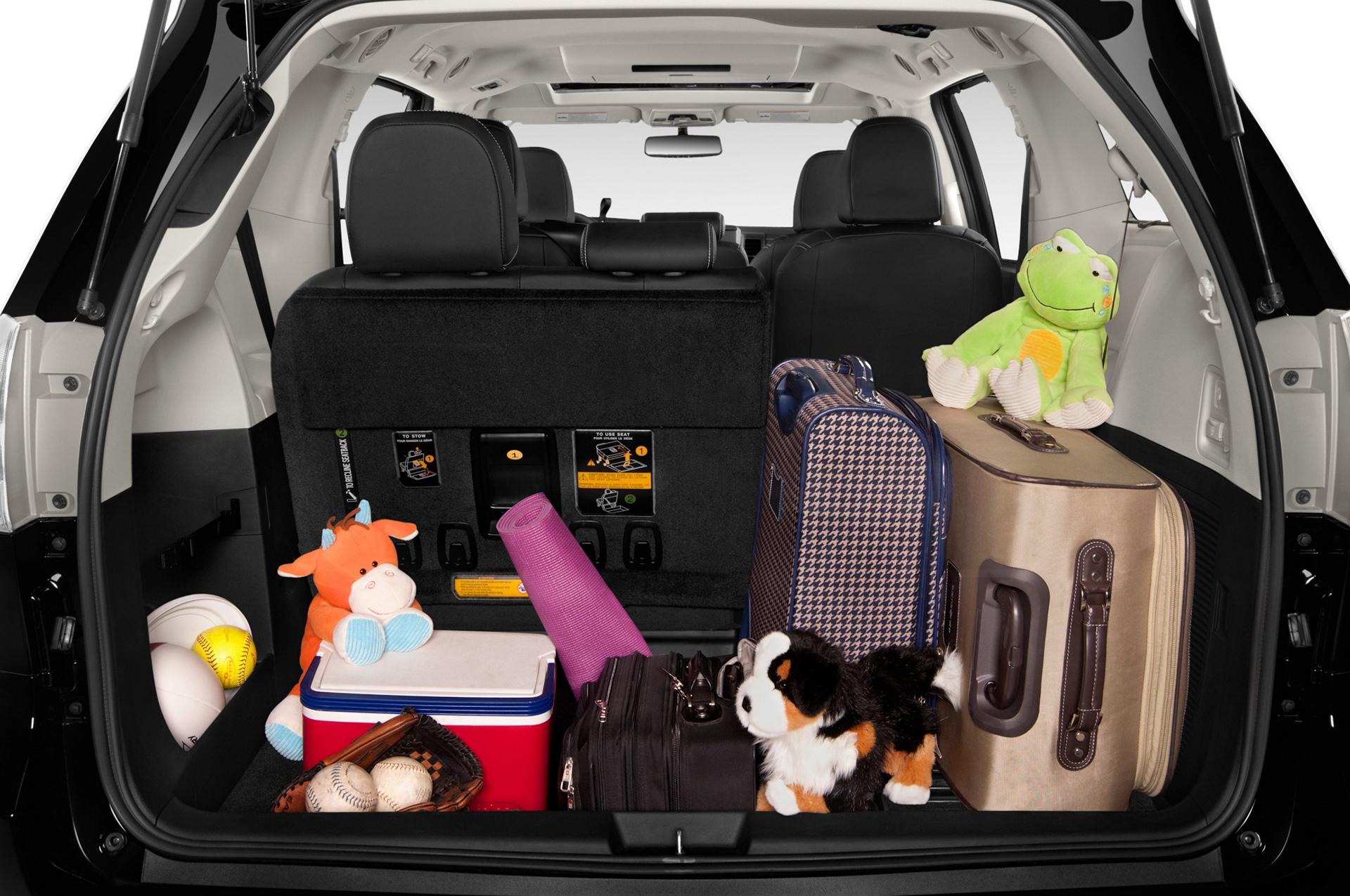 The 60/40 Split and Stow third-row seat folds flat with one motion and is made even easier in the Limited FWD model with its power seat-lowering function. Even with the third-row seats in use, the Sienna still possesses enough cargo capacity to hold five golf bags or four large suitcases. Handy grocery hooks in both rows add storage convenience. Roof rack crossbars are available for even more cargo carrying possibilities.

Comfort and Aid for Parents 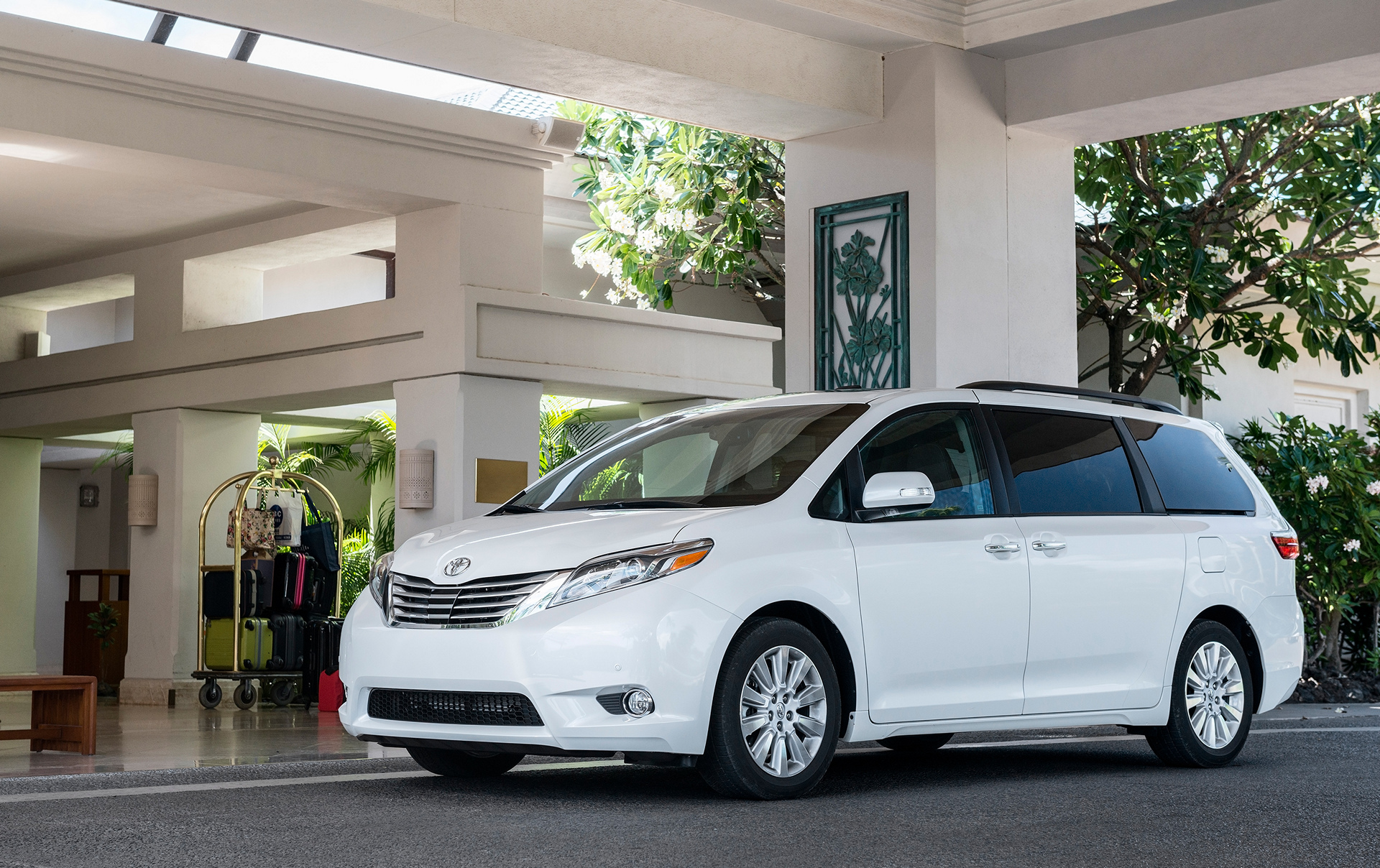 With its front dashboard’s convenient design that neatly groups climate control, gearshift, and multimedia buttons, the Sienna makes sure shuttling the family is a low-stress experience. A Tri-Sync switch for the air conditioning lets drivers manage temperatures in all three climate zones without a fuss. The available pushbutton driver’s seat center armrest can adjust to numerous positions, and can return to its last position even after it’s been stowed. Cold hands will appreciate the Limited’s standard heated leather-wrapped steering wheel. 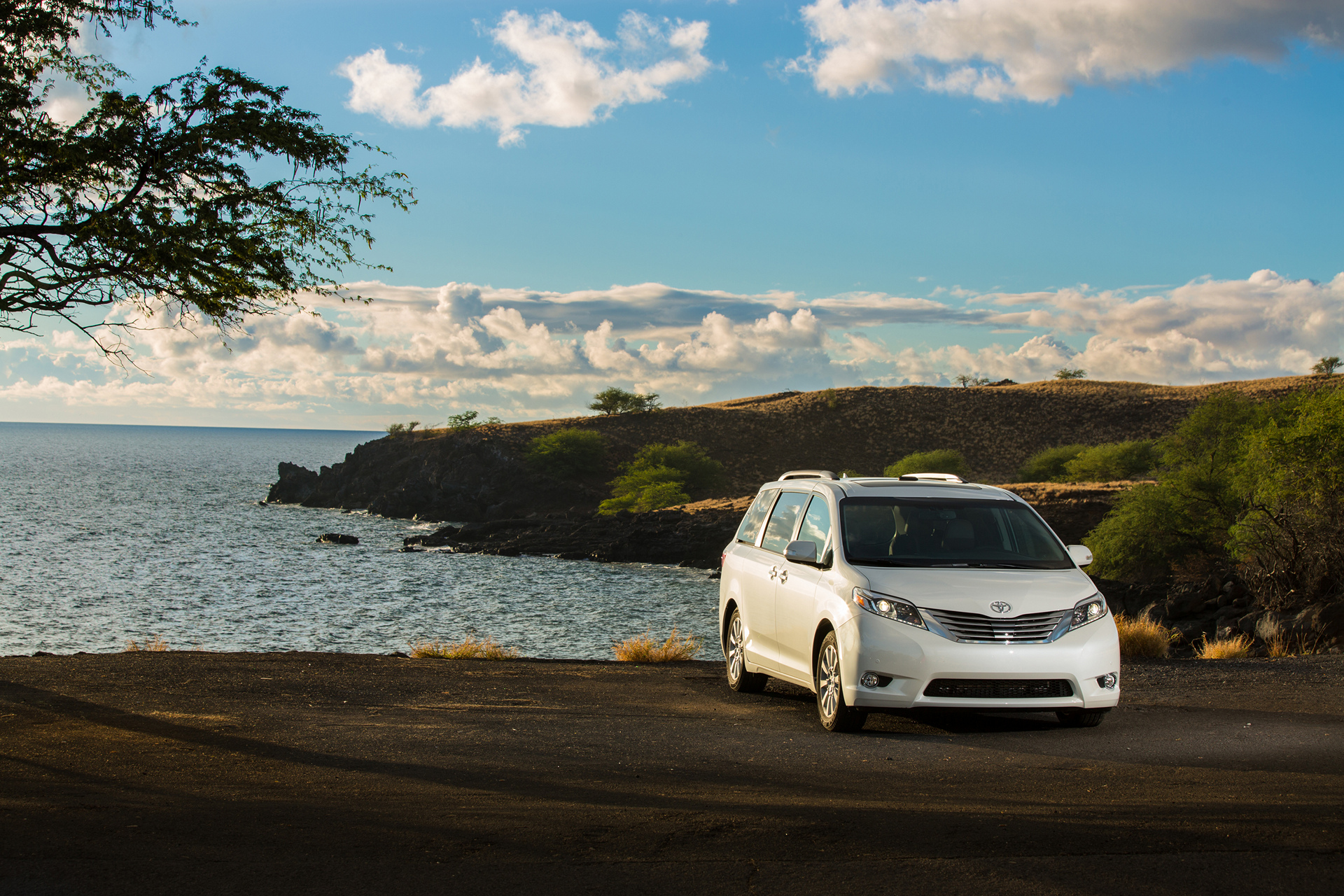 Keeping eyes squarely on the road – that’s the idea behind the multi-information display (MID) placed within the instrument panel sitting in the driver’s line of sight. The display comes in either a base 3.5-inch dot-matrix LCD, or, in the case of higher trims, a 4.2-inch color TFT (thin film transistor) screen. Either type provides the driver with all the pertinent vehicle and multimedia information in simple, easy to read format. 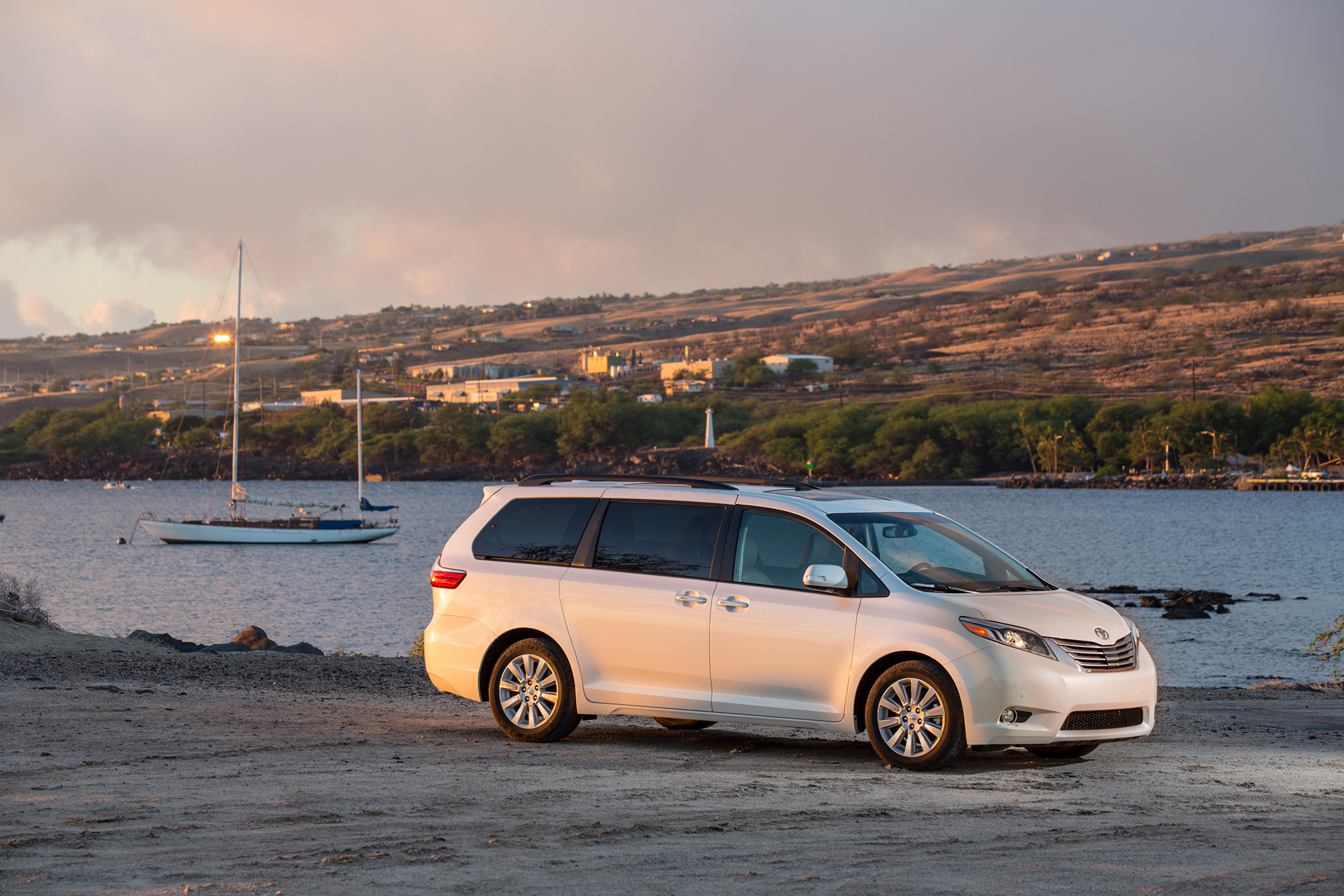 Audio channels can be controlled via the four-way switch located on the multifunction steering wheel. The TFT MID is linked directly to the Entune™ multimedia system and is able to display turn-by-turn navigation information. On AWD models, this version can also show all-wheel drive operation, which can indicate the vehicle’s response on slippery surfaces. 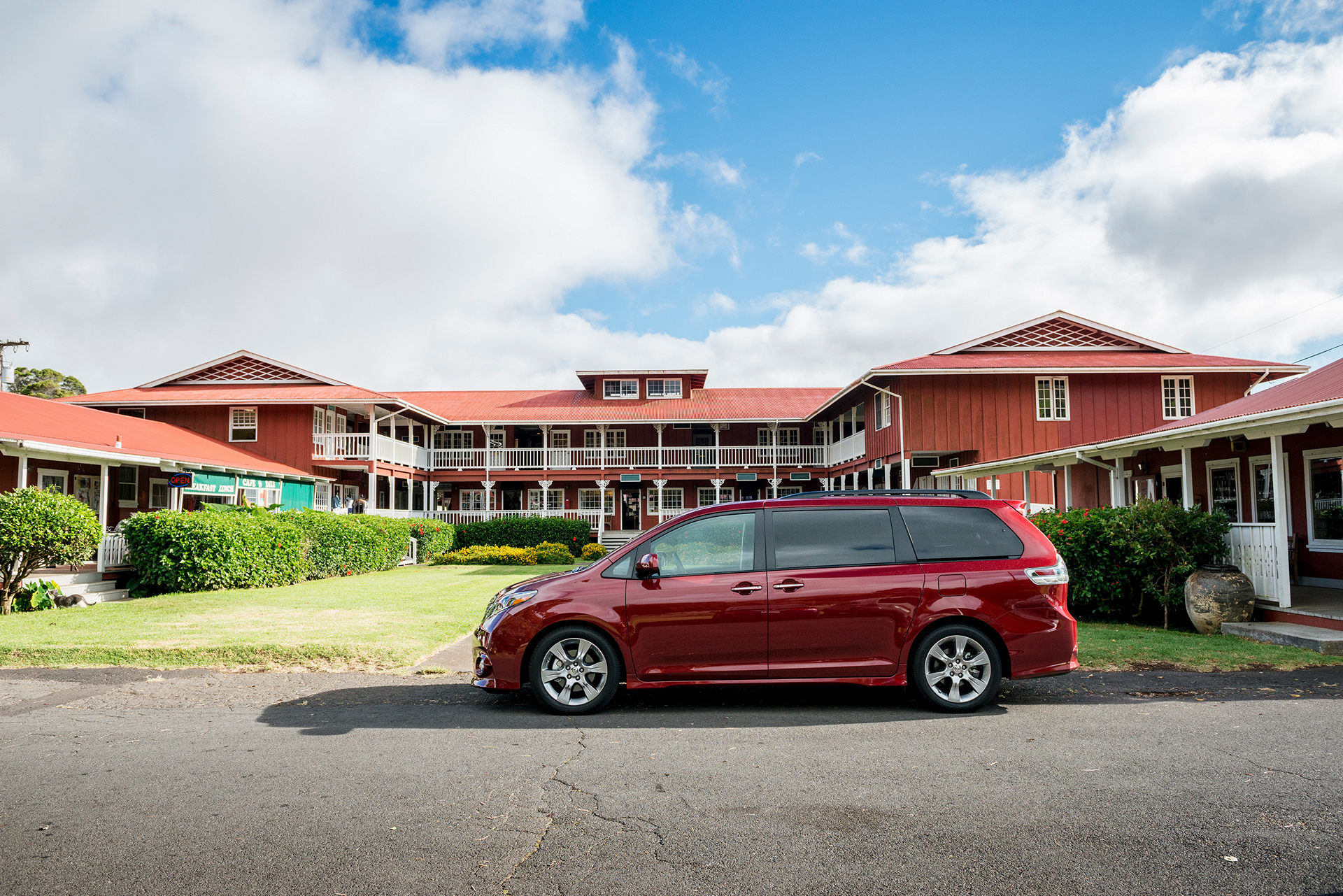 The value of the available Dual View Entertainment Center, which uses two viewable displays within a seamless 16.4-inch widescreen image, will be immediately apparent – and appreciated – by parents. Used as a single screen, it can be easily seen from the third row. The system features Blu-Ray capability, an HDMI input, and an SDXC card reader that can play 10 different audio and video formats. It can play from one or two separate sources as well, and the option also includes a pair of wireless headphones. Passengers in any seat can operate the entertainment system via remote control.

Entune™ Multimedia is in Tune with You 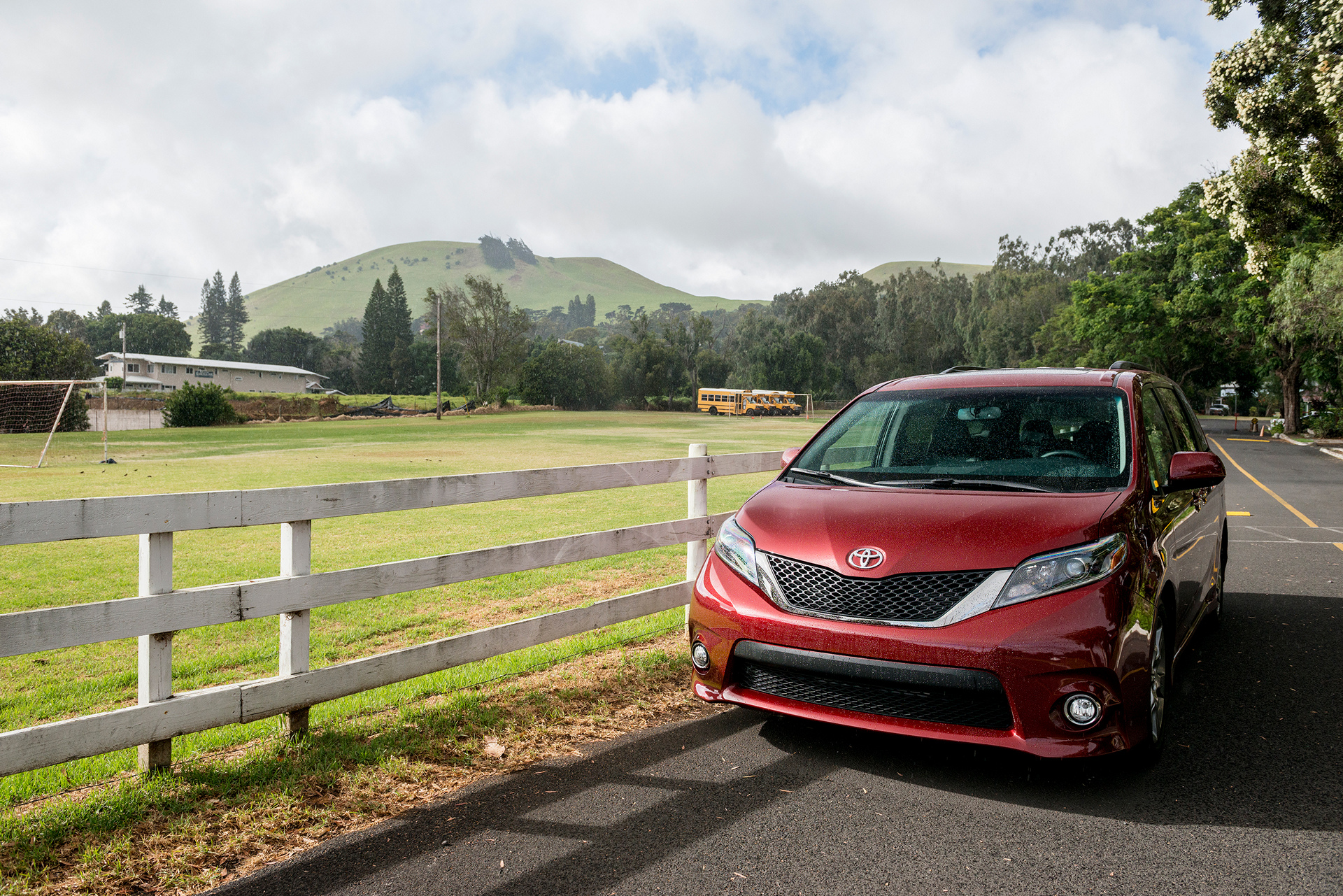 Multimedia and connectivity are essential to a family van’s utility. That’s why every available head unit integrates Siri® Eyes Free mode. The LE, SE, XLE’s Connected Navigation via Scout® GPS App Link for the Entune® Audio Plus system uses a customer’s smartphone to provide navigation functionality through the head unit. The four available Entune® systems include:

Each is equipped with Siri® Eyes Free and an integrated backup camera display. Using Bluetooth® wireless or a USB cable, users can pair a compatible smartphone to access popular mobile applications and data services. Then, use the Sienna’s controls to operate the apps.

On Entune™ Audio Plus and above, headunits come with SiriusXM® Satellite Radio with 3-month Complimentary SiriusXM All Access Trial, HD™ Radio, HD™ Radio traffic and weather in major metro areas. 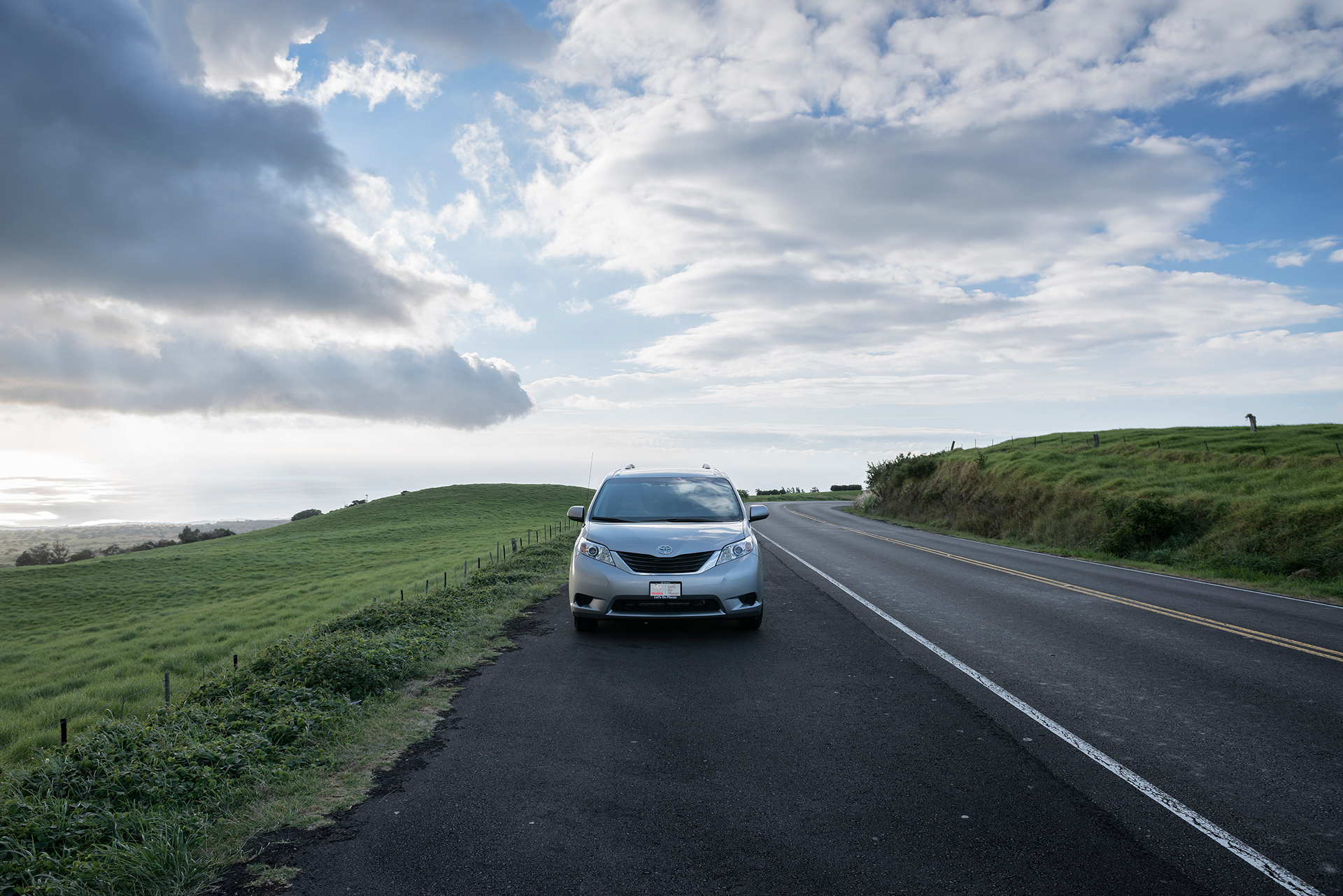 The Sienna is equipped with eight Supplemental Restraint System (SRS) airbags, including dual-stage front airbags, seat-mounted side airbags for the driver and front passenger, side curtain airbags from the front seats to the third row, a front passenger seat cushion airbag plus a driver’s side knee airbag. Active headrests in both front seats help to reduce the possibility of whiplash in certain types of collisions.

The available Blind Spot Monitor with Rear Cross Traffic Alert on SE (standard on XLE and Limited) uses sub-millimeter wave radar designed to detect vehicles in the Sienna’s blind spots. When the system detects a vehicle in the adjacent lane, it alerts the driver using indicators on the side mirrors. If the turn signal is activated when there is a vehicle in the blind spot of the driver’s intended lane, the indicator on the corresponding mirror will flash. Rear Cross Traffic Alert can be especially helpful alerting the driver of an on-coming vehicle when backing out of a driveway or parking space using an audible and visual alert.

Furthermore, Pre-Collision System (PCS) and Vehicle Dynamics Integrated Management (VDIM) are available on the Sienna Limited Premium as part of the optional Limited Advanced Technology Package. PCS employs radar to help determine if a frontal collision is imminent, and automatically applies the brakes and retracts the front seatbelts to help reduce the effects of a collision. Providing further protection are side-impact door beams that help prevent vehicle intrusion into the cabin. The VDIM coordinates brake control with engine output and steering inputs. Unlike reactive traction systems, VDIM operates proactively. During normal driving, the system works smoothly to enhance control even before the vehicle reaches its limits.

Also included in the package are Dynamic Radar Cruise Control (DRCC) and Hill Start Assist Control (HAC). DRCC is designed to keep a pre-set following distance between the Sienna and the vehicle traveling directly ahead of it. If that vehicle slows down, so does the Sienna —and if it speeds back up or changes lanes, DRCC will help the Sienna automatically accelerate back to its set cruising speed. HAC is designed to help minimize backward rolling on steep ascents when the driver moves his or her foot from the brake to the accelerator. 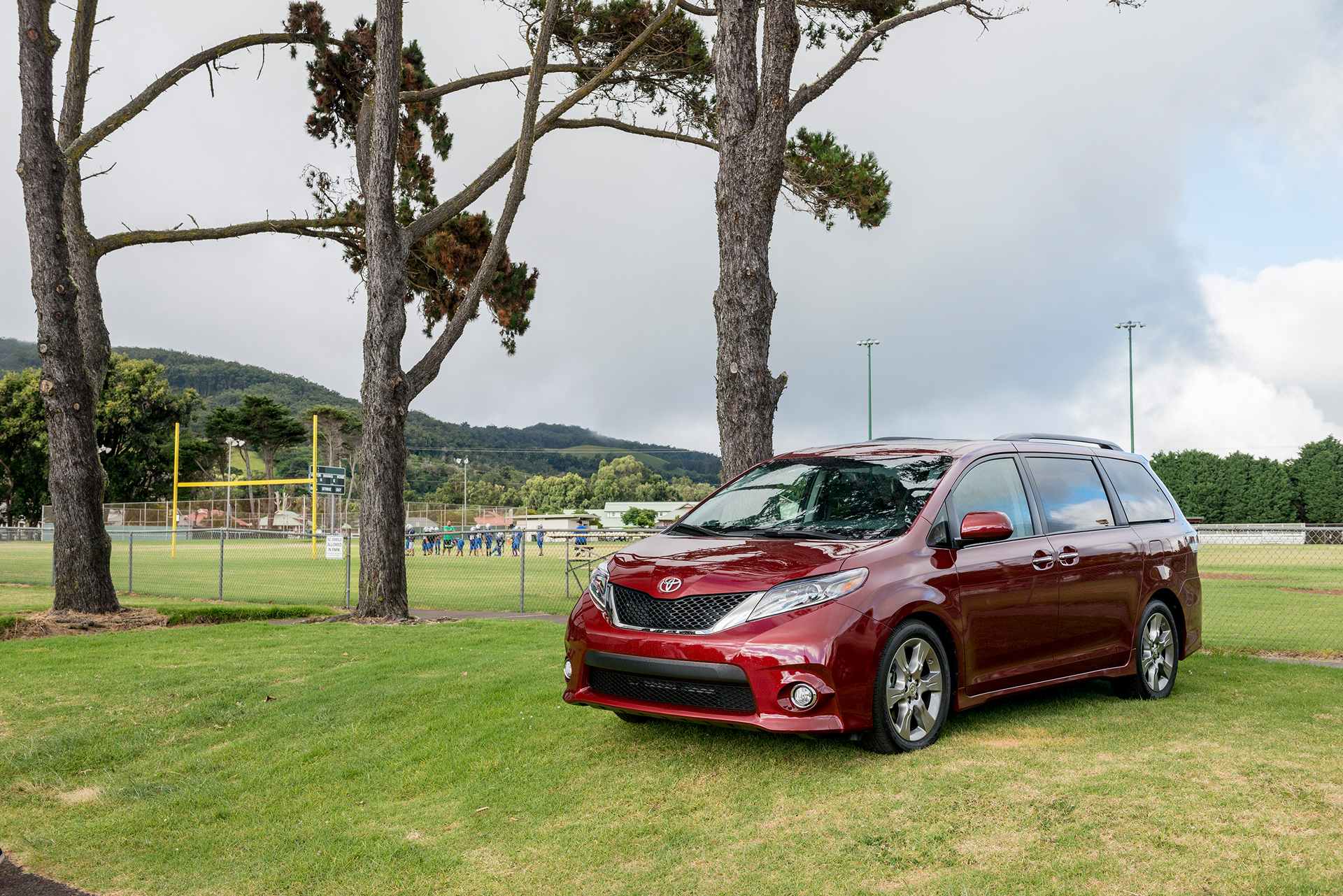 Toyota’s 36-month/36,000 mile basic new-vehicle warranty applies to all components other than normal wear and maintenance items. Additional 60-month warranties cover the powertrain for 60,000 miles and corrosion with no mileage limitation.