BMW 2002 Hommage Celebrates the Birth of the Turbocharged Car 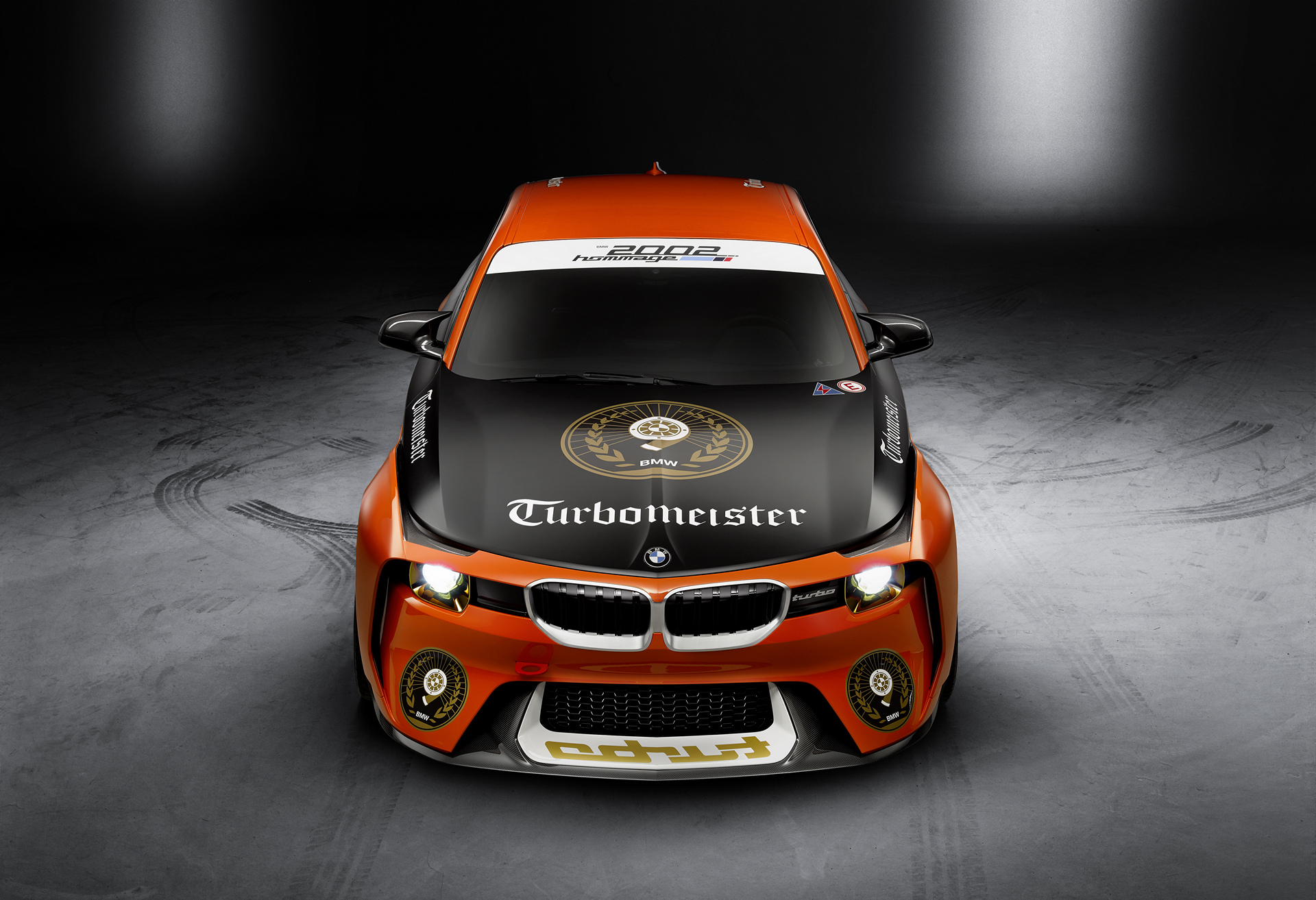 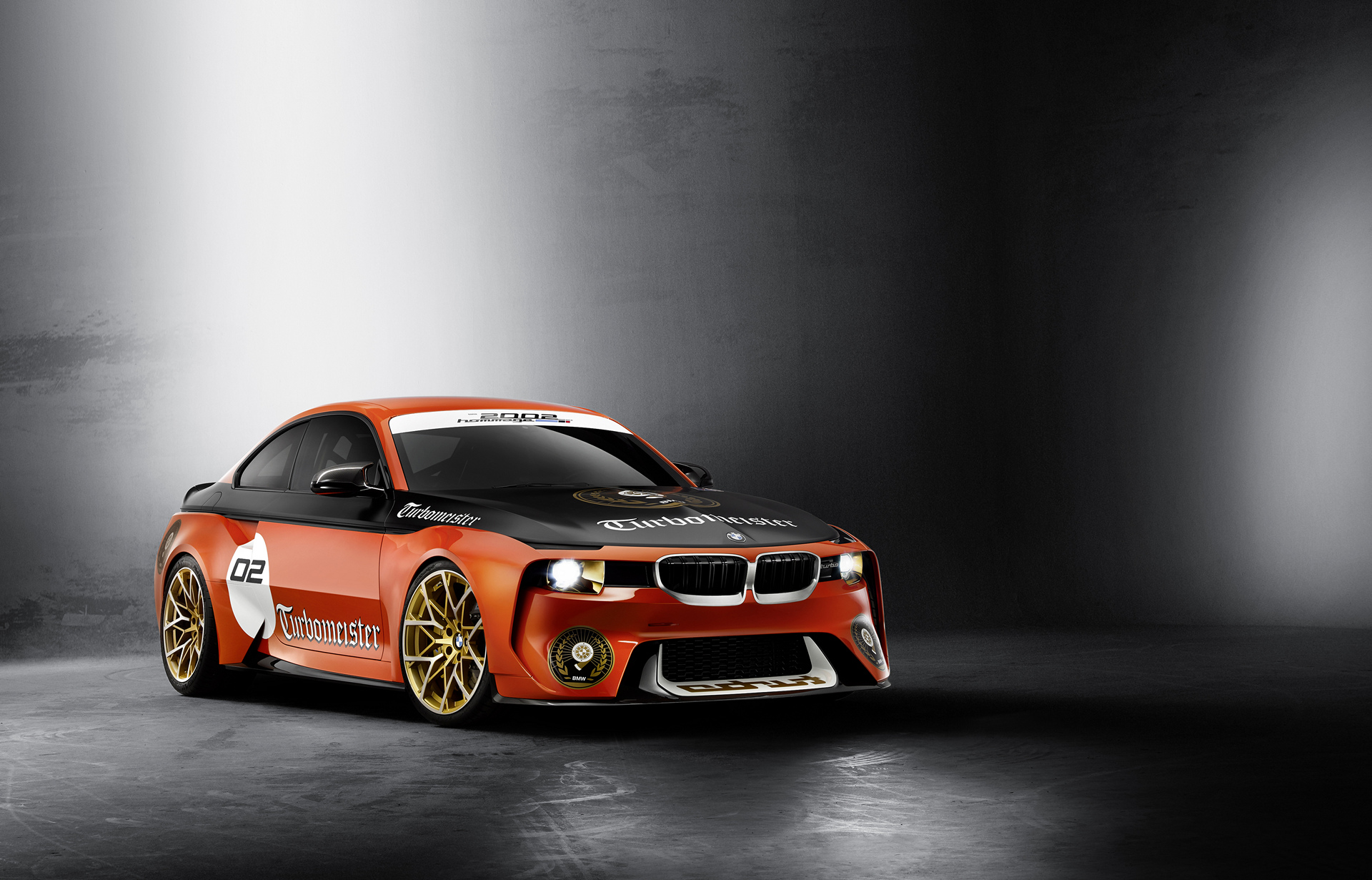 At the Concours d’Elegance in Pebble Beach, the BMW Group is presenting the BMW 2002 Hommage to shine the spotlight back over its successful history with turbocharged engines. In 1973 the BMW 2002 turbo became the first series-produced vehicle in Europe to feature turbo technology. In so doing, it turned the BMW 02 into a full-blooded sports car. Looking back, the advent of BMW turbo engine technology pointed the way for both the development of the sportiest BMW sedans and milestones such as the first Formula One World Championship title for a turbocharged car – won by Nelson Piquet in 1983. 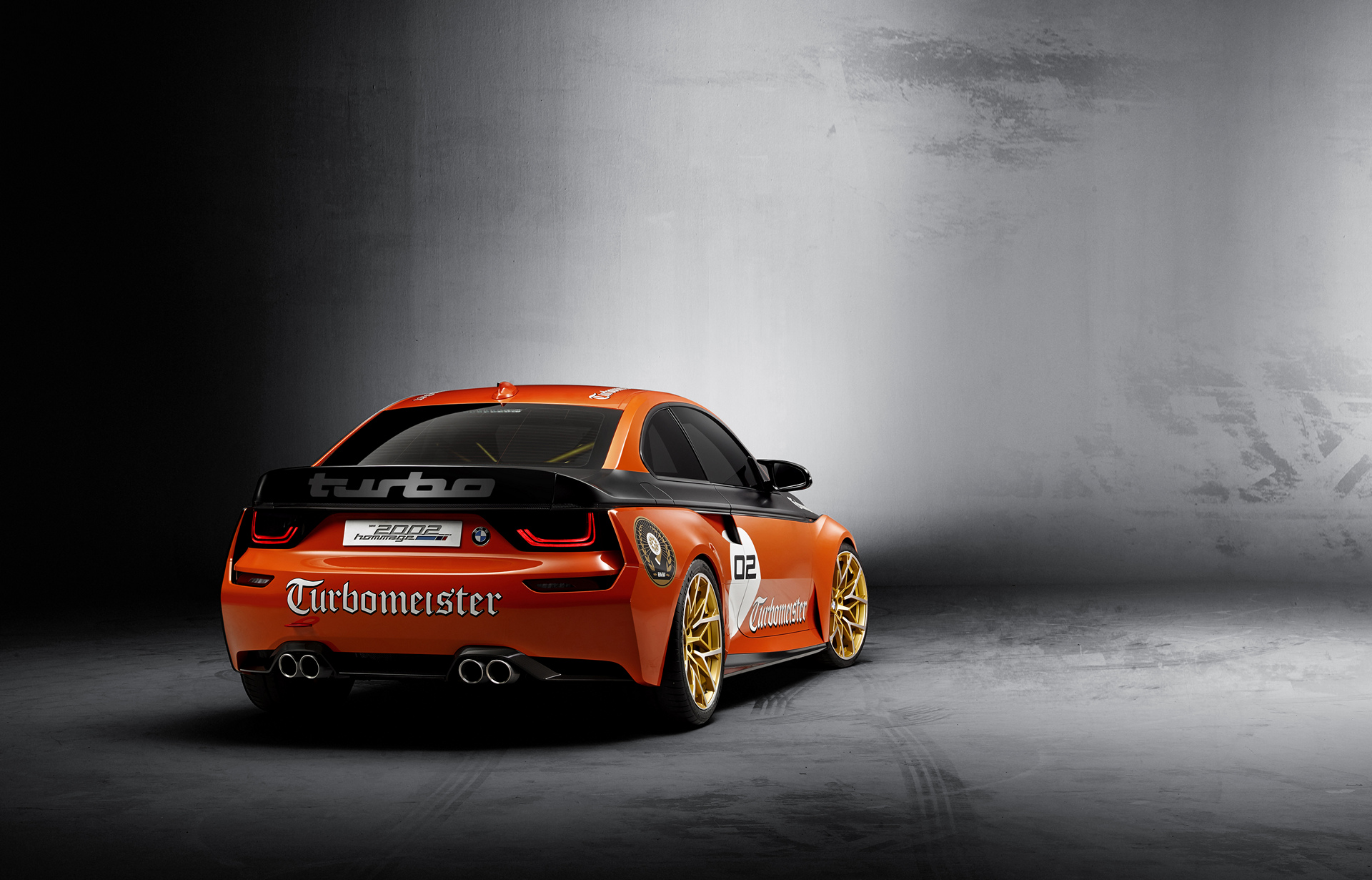 “The BMW 2002 Hommage celebrates the extraordinary feats of engineering on which BMW turbo technology is based and re-interprets them in the form of a design study,” says Karim Habib, Head of Design BMW Automobiles. “With its iconic orange/black paintwork, the car has a colour scheme and livery synonymous in the minds of many motor sport fans with the triumphs of the 1970s.”

The model unveiled in Pebble Beach writes the next chapter in a story begun by the BMW 2002 Hommage, which the company presented at the Concorso d’Eleganza Villa d’Este in May. 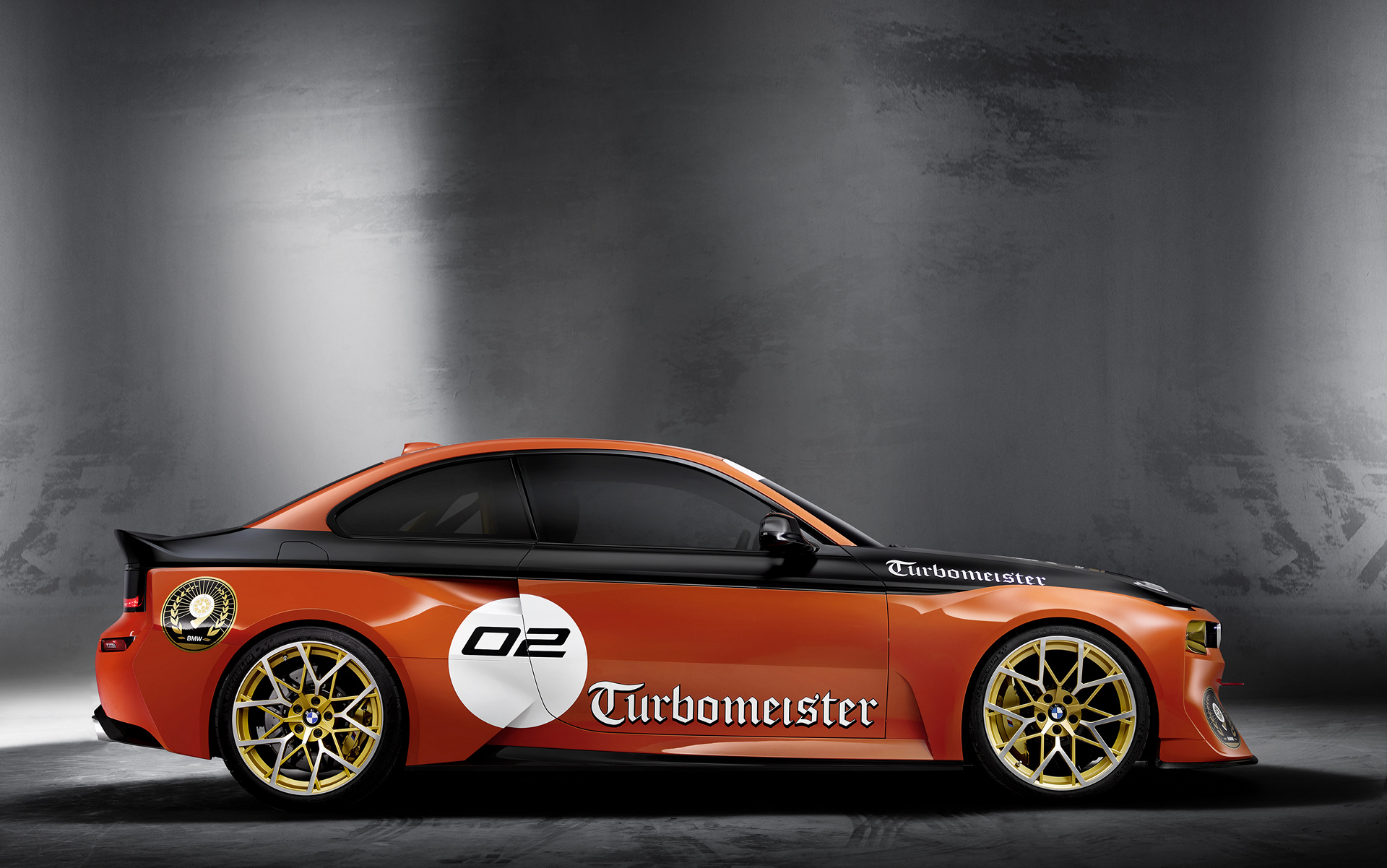 The sporting silhouette of the BMW 2002 Hommage lies low against the road. Its compact proportions; complete with long wheelbase, short overhangs and prominent “shark nose”, promise a driving experience that thrills with irresistible dynamics and agility. Aerodynamic details like the large spoilers at the front and rear team up with the profusion of air intakes and exits to optimise airflow around the car and maximise downforce in every driving situation.

Historic details with a modern twist 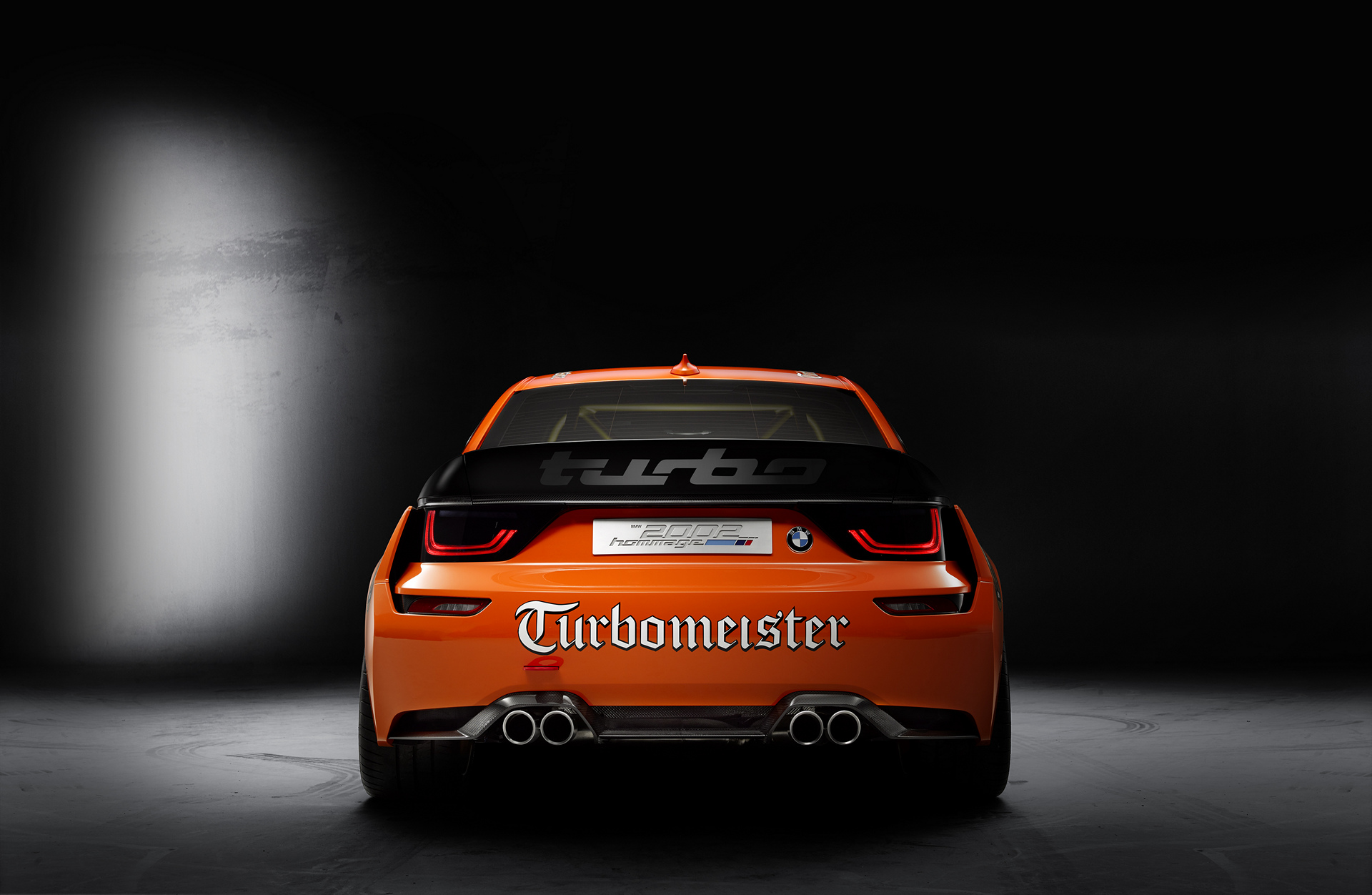 A particularly striking feature of the car’s flanks are the pronounced wheel arches, which frame the body like four brackets and add stature. In the process, they recall the homologated version of the BMW 2002 turbo, which needed broad extensions bolted onto its body to accommodate a significantly wider track. The Hommage car integrates this detail neatly. Sleek surfacing and precisely chiselled lines envelop the powerful wheel arches and hand them a starring role.

In perhaps the most literal reference of the original 2002, the 2002 Hommage features a unifying “waterline” to connect many of the car’s formal elements. This unbroken carbon fiber line physically wraps around the car from front to rear, while also creating a horizontal distinction between upper and lower body surfaces.

20-inch light-alloy wheels in bi-colour design round off the styling as the car meets the road. The modern looks of these lavishly milled, multi-spoke items recall the racing rims of bygone eras, while gold-coloured brake callipers bearing the M logo add an extra stamp of class.

Fronted by 50 years of BMW history 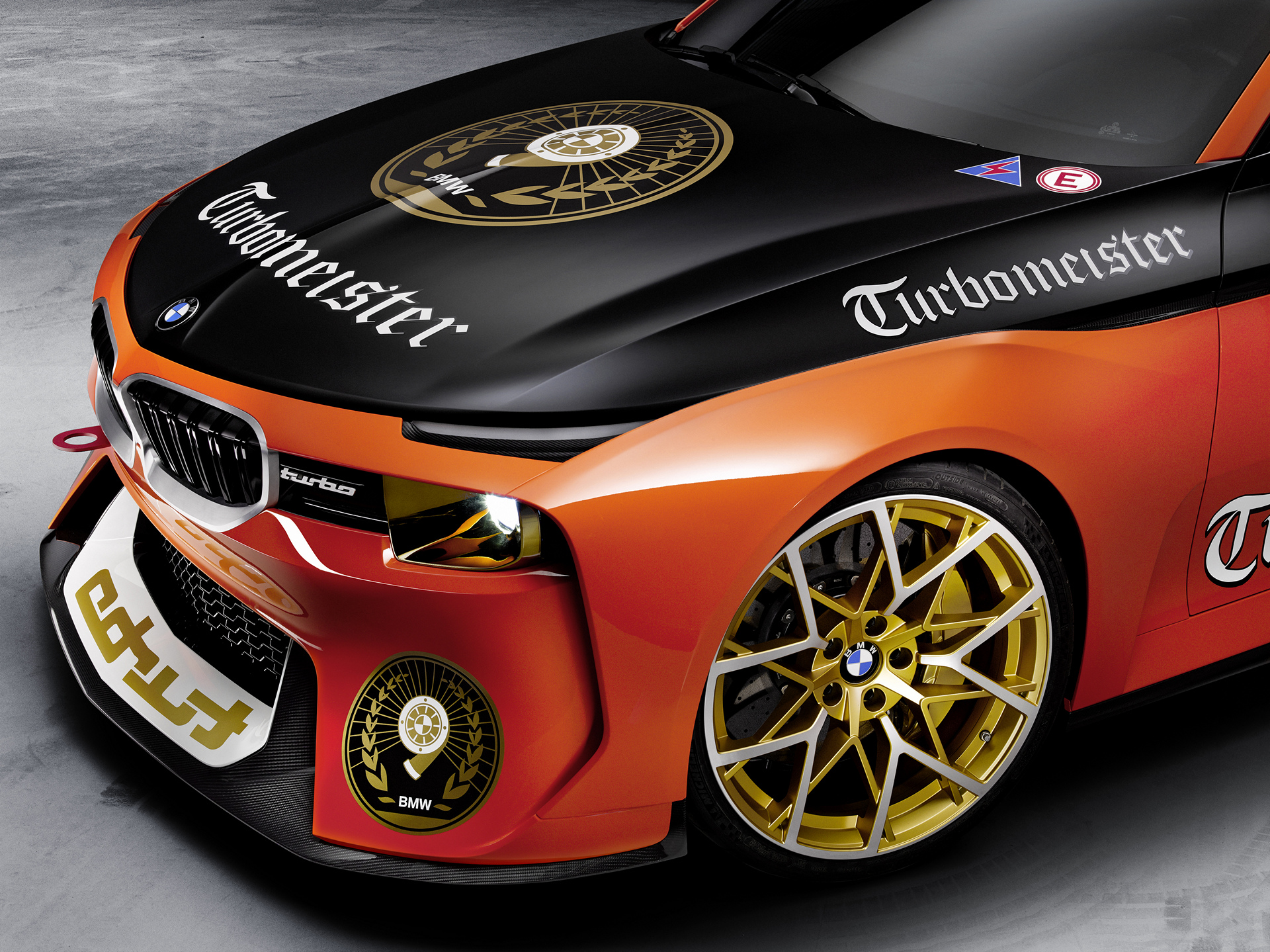 The front end of the BMW 2002 Hommage is a confident and extravagantly dynamic affair; its styling bridges a gap of 50 years in combining the characteristic, horizontal grill graphic of the 02 series with modern elements of BMW design. In its lines and form, the bonnet references the “spear” contour stretching down the centre of the 02 models that swells slightly into a surround for the BMW logo as it approaches the kidney grille. Further precise lines lend structure and definition to the matt surface.

Occupying centre stage at the front end is the familiar BMW kidney grille. Here, it takes the form of a low-standing, connected unit, offering a flesh slant on the kidneys’ historical rendering as a cohesive design element. Sculpted, black double-bars add finesse to the details of the broad-set grille. Like the BMW 2002, the BMW 2002 Hommage also has two single round headlights that provide the striking front end with its outer limits. 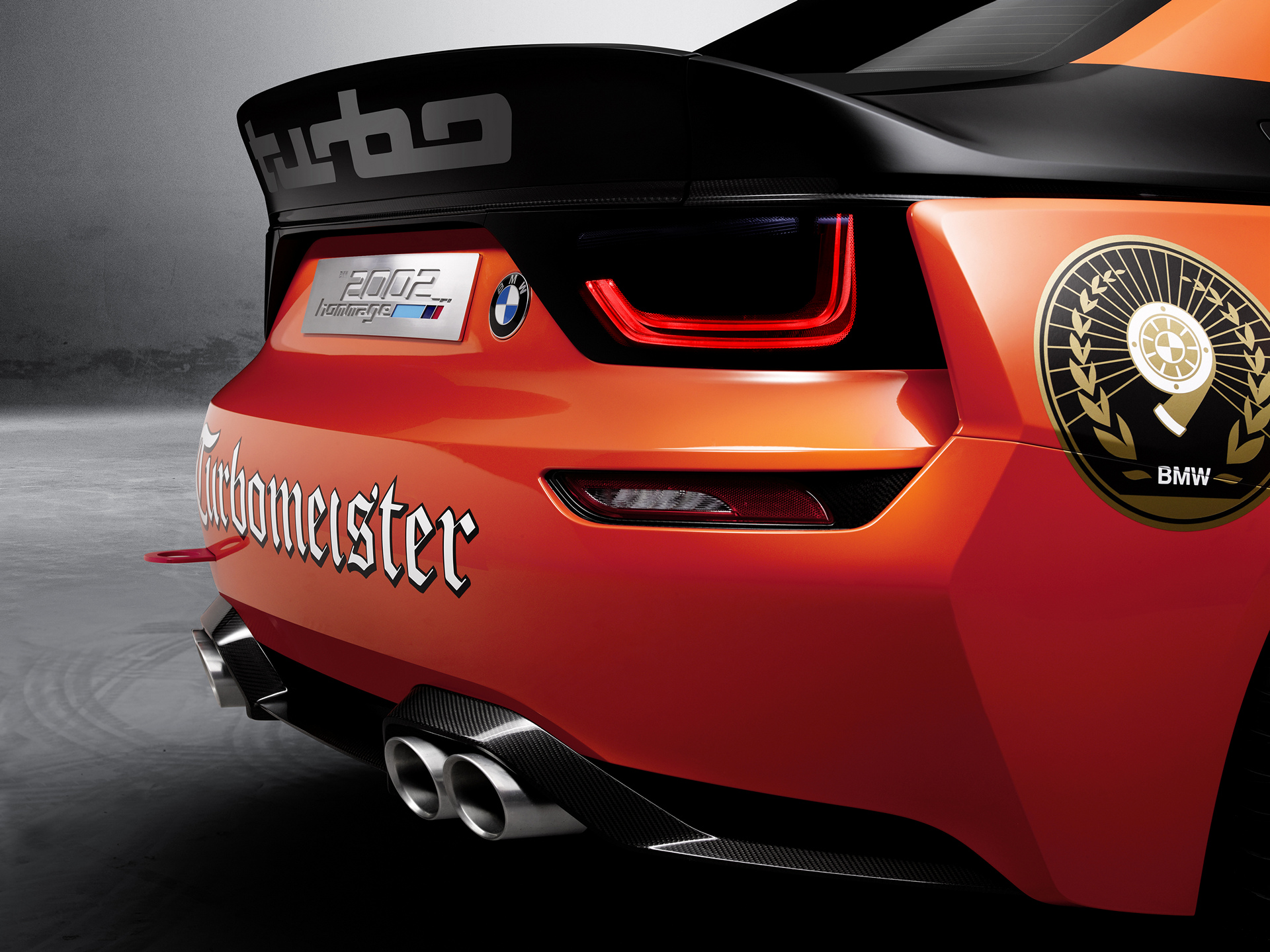 The headlights’ reflective gold colouring is a pointer to the “golden” 50th anniversary of the BMW 2002’s launch. The headlights also reprise the yellow hue commonly found in the headlamps of racing cars back in the day. An unbroken horizontal black band unites the design elements of the front end and in so doing, underlines the car’s wide and athletic stance. Those with a keen eye will also pick out the turn signal repeaters, which – like those of the car’s forebear – are located separately from the headlights and embedded in the wrap-around carbon fiber waterline element.

The large front apron, a stylistic and functional aerodynamic nod to those models of the 1970s, shortens the visual distance between the BMW 2002 Hommage and the road. Together with the car’s wide, sporting stance, this technically innovative, forward-thinking design sends out a message of top-class roadholding and handling flair through fast corners. Now, as in the heyday of the BMW 2002, design excellence and turbo technology bring unsurpassed levels of fun to twisty race tracks, country roads and mountain passes alike. The “turbo” lettering in mirror writing on the front apron casts the mind back to the original decals of the 2002 turbo. Accent surfaces in exposed carbon mark the point where the front apron and side skirts hand over to the road, and also provide a technically alluring contrast to the body-coloured surfaces.

Bringing matters to a sporting conclusion 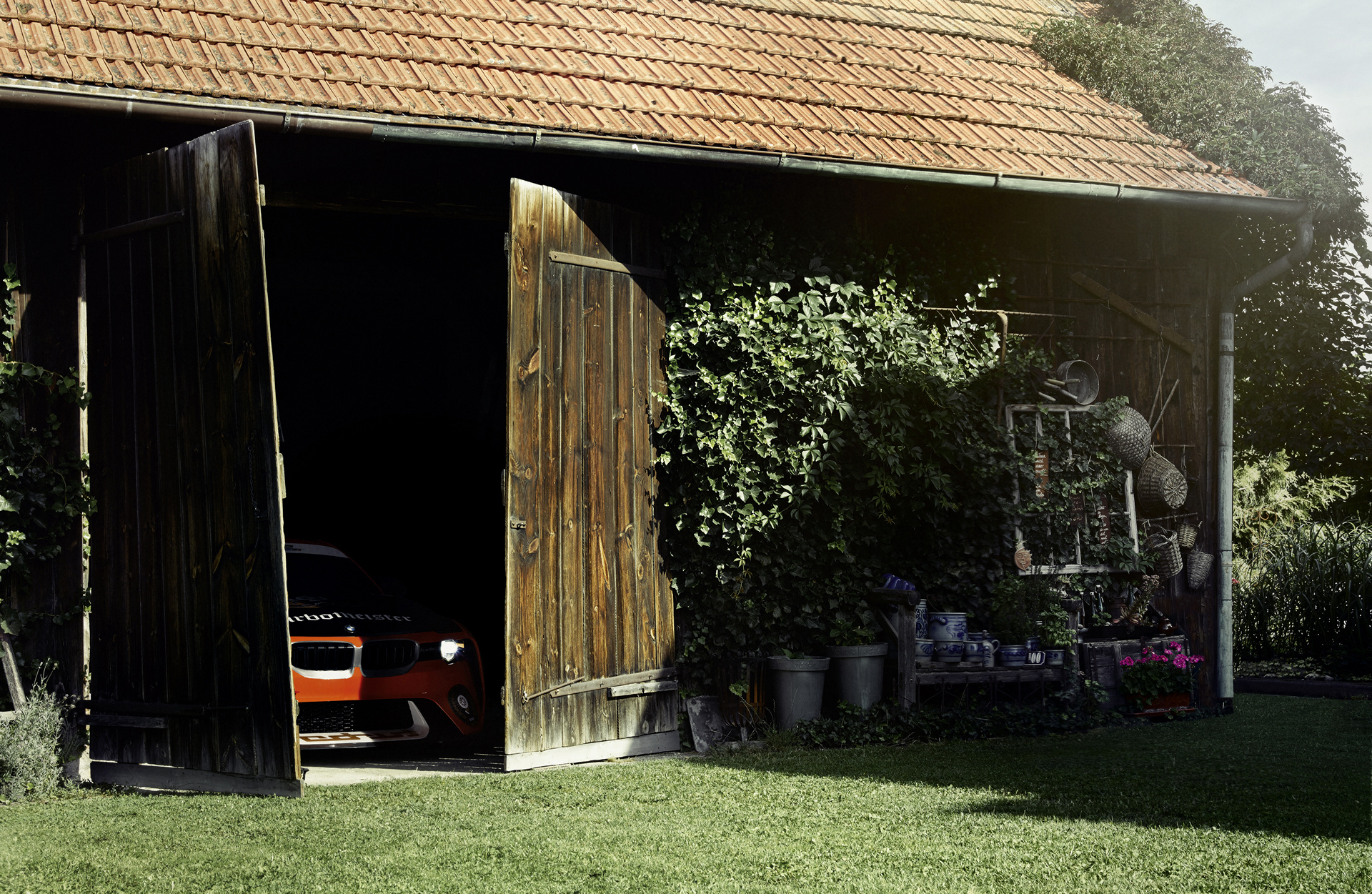 The rear-end design of the BMW 2002 Hommage also calls on elements of the 2002 turbo. For example, the horizontal sub-division of the car’s generous surfaces and its clear lines make a width-emphasising and thus suitably dynamic statement, laced with modern feel. The almost rectangular lights provide a stylistic border for the rear end. The glass covers have a contemporary black- panel look and only offer a view of the inner workings when the lights illuminate. 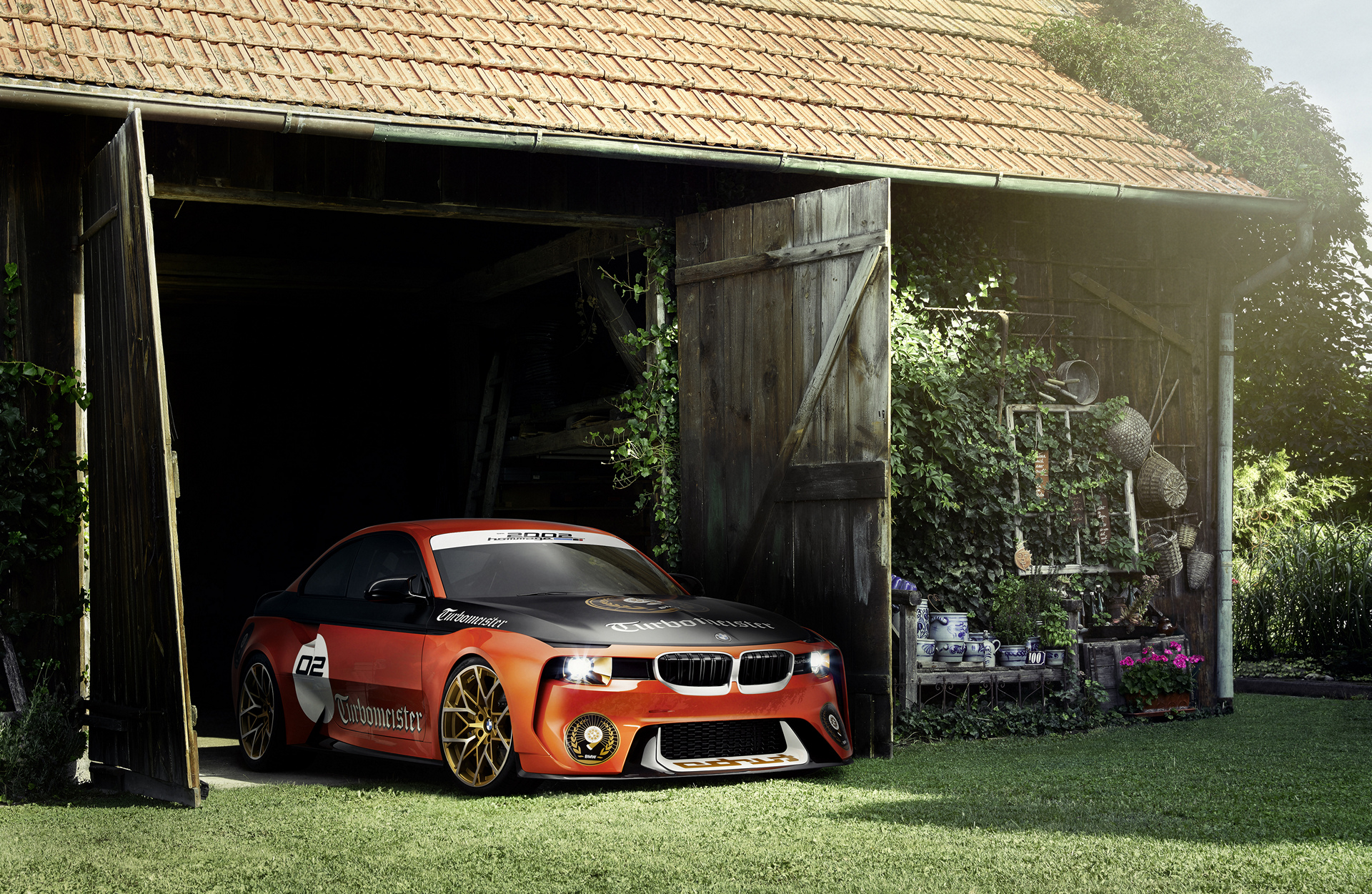 All you can see when they are dormant is an unbroken black surface. As at the front of the car, this strengthens the impression of a strip wrapped around the car. 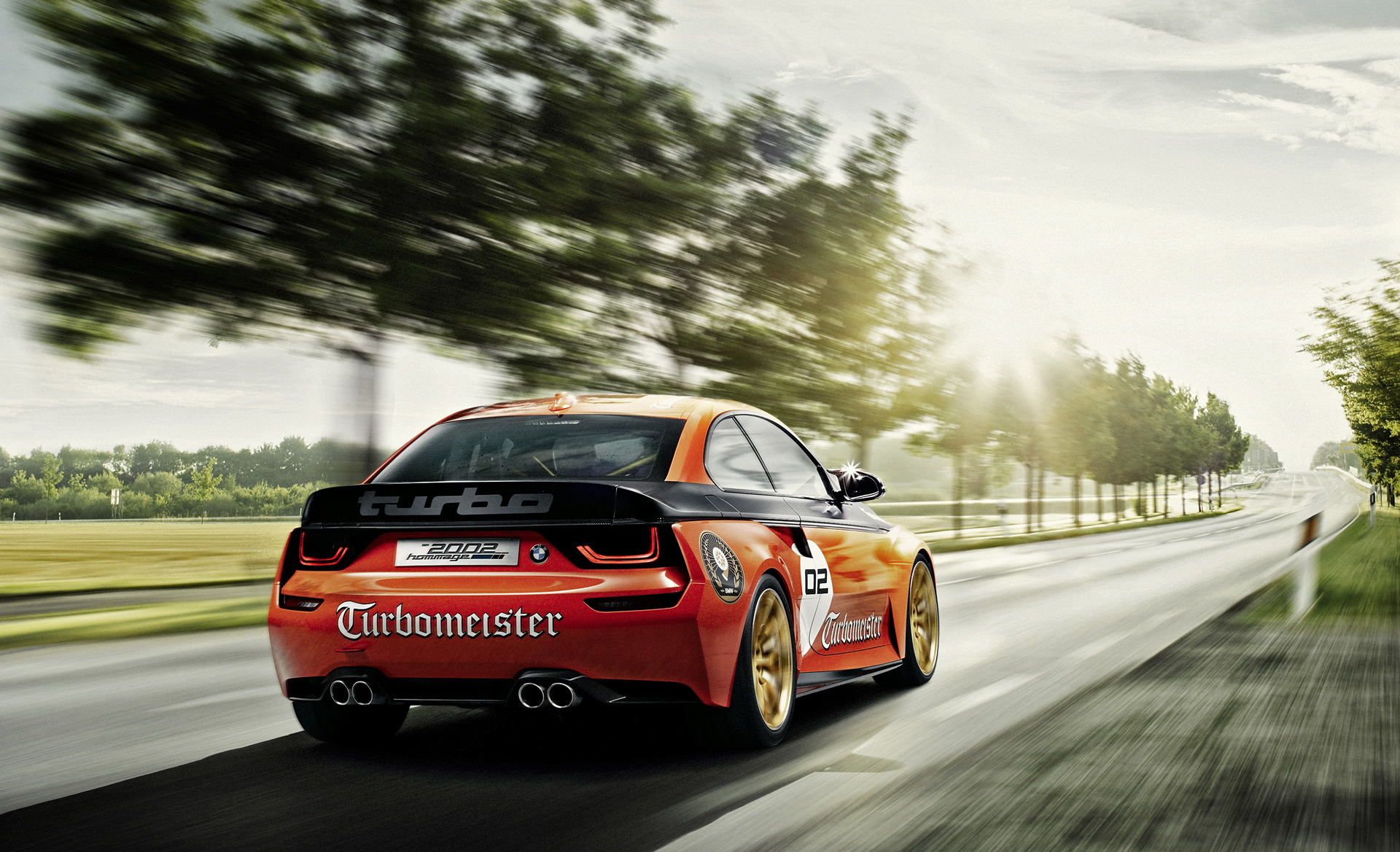 The asymmetric BMW logo placement to the right of the license plate between the two rear lights is likewise a characteristic element of 02 rear styling. The muscular wheel arches bookend the rear section and accentuate the wide track, while a precise spoiler lip brings a modern edge to the car’s detailing. A carbon diffuser integrates the now familiar two sets of twin exhaust tailpipes and wraps up the rear styling with a sporting flourish.

BMW’s fresh interpretation of the BMW 2002 adopts the form of a compact sports coupe in the classical tradition of BMW Hommage cars. But more than that, the BMW 2002 Hommage represents a clear statement of how pure driving pleasure is defined in 2016.