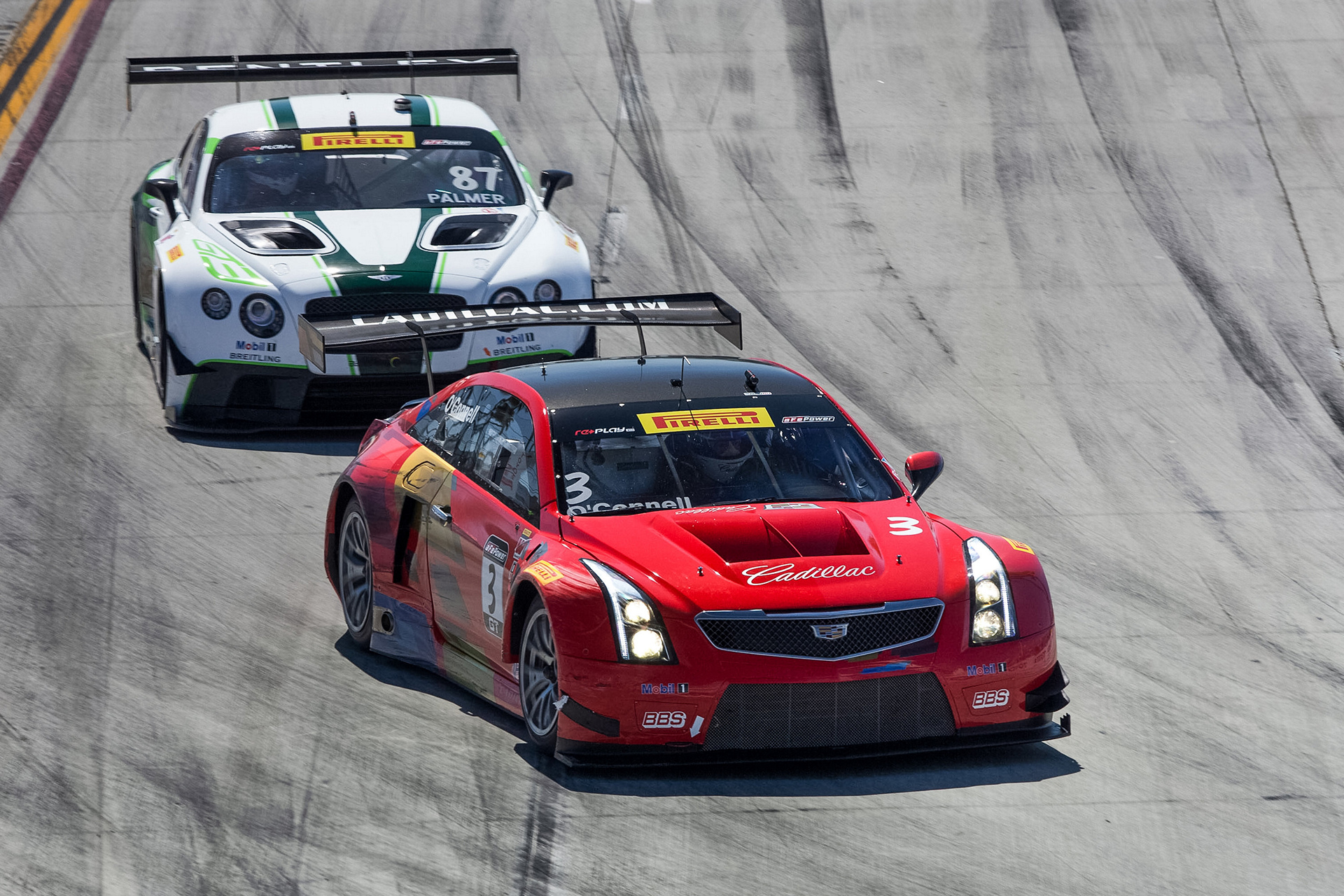 Cadillac Racing driver Johnny O’Connell was relegated to second place in post-race inspection after crossing the finish line first in today’s running of the Pirelli World Challenge Long Beach Grand Prix presented by Cadillac. Teammate Cooper had an amazing run through the field that was thwarted by fluid on the track. O’Connell (Flowery Branch, Ga.) took the start to the 50-minute sprint race from the front row in second. Pole sitter Alvaro Parente drove his McLaren deep into Turn 1 allowing two other cars to get ahead of O’Connell. Just at the completion of lap one a full course yellow flew. On the ensuing restart O’Connell was able to pass the Porsche of Patrick Long and the McLaren of Colin Thompson to move back into second. A second full course yellow flew on lap 10. On the restart, O’Connell was once again able to put the power down in his Cadillac ATS-V.R Coupe to take the lead and the win. The victory is his second of the year and second for Cadillac at Long Beach. During post-race inspection the No. 3 Cadillac ATS-V.R Coupe was found to have two traction control induced turbo boost spikes during the race that were out of specification. The SCCA Officials thus relegated O’Connell to second handing the win to Parente. “Of all the laps that I did today that first run into Turn 1 was the toughest,” said O’Connell. “I arrived at my braking point later than Parente and timed everything perfect while allowing him racing room. He went in deep and couldn’t get his car to turn and we had contact with the tires that allowed two cars to get by. There was not a lot of grip out there today. On the restarts I had a strong car and with my experience here I was able to get into the lead. Once there it was a matter of focus and hitting my marks. It is great to be able to showcase the athleticism of the AST-V around the streets of Long Beach. In post-race tech they found we had a few boost spikes that were not to their liking. From what I understand these were when we were in traction control situations, so not a speed advantage at all. But rules are rules. A second place finish does not take away from the accomplishment of Cadillac Racing today. I am proud of the team.”

Teammate Cooper (Syosset, N.Y.) who had a car issue in qualifying that forced him to start from the rear of field was having a career run. Using the restarts to his full advantage by lap 15 he had the No. 8 Cadillac ATS-V.R Coupe in the top ten and by lap 22 he was in fourth with his sights set on a podium finish. With eight minutes to go he rolled through fluid on the track, brushed the wall which forced him to pit and park it. He was classified in 15th and posted the fastest lap of the race.

“The Cadillac ATS-V.R Coupe proved today that we have a very strong team and very well prepared cars with my run and Johnny’s win,” Cooper said. “The Cadillac Racing team did a great job to get my car sorted out from what happened yesterday. I had a really strong run going. It was fun being able to make moves on 18 cars coming through the field. I appreciate that everyone raced me clean. The first and second restarts is where I was really able to make-up ground. Once I got into fourth and was chasing Patrick Long I got into some fluid on the track and brushed the wall. I had to pit and that was it.”

The Pirelli World Challenge series will travel directly to Barber Motorsports Park in Birmingham, Alabama for rounds six and seven to run next weekend, April 22-24.