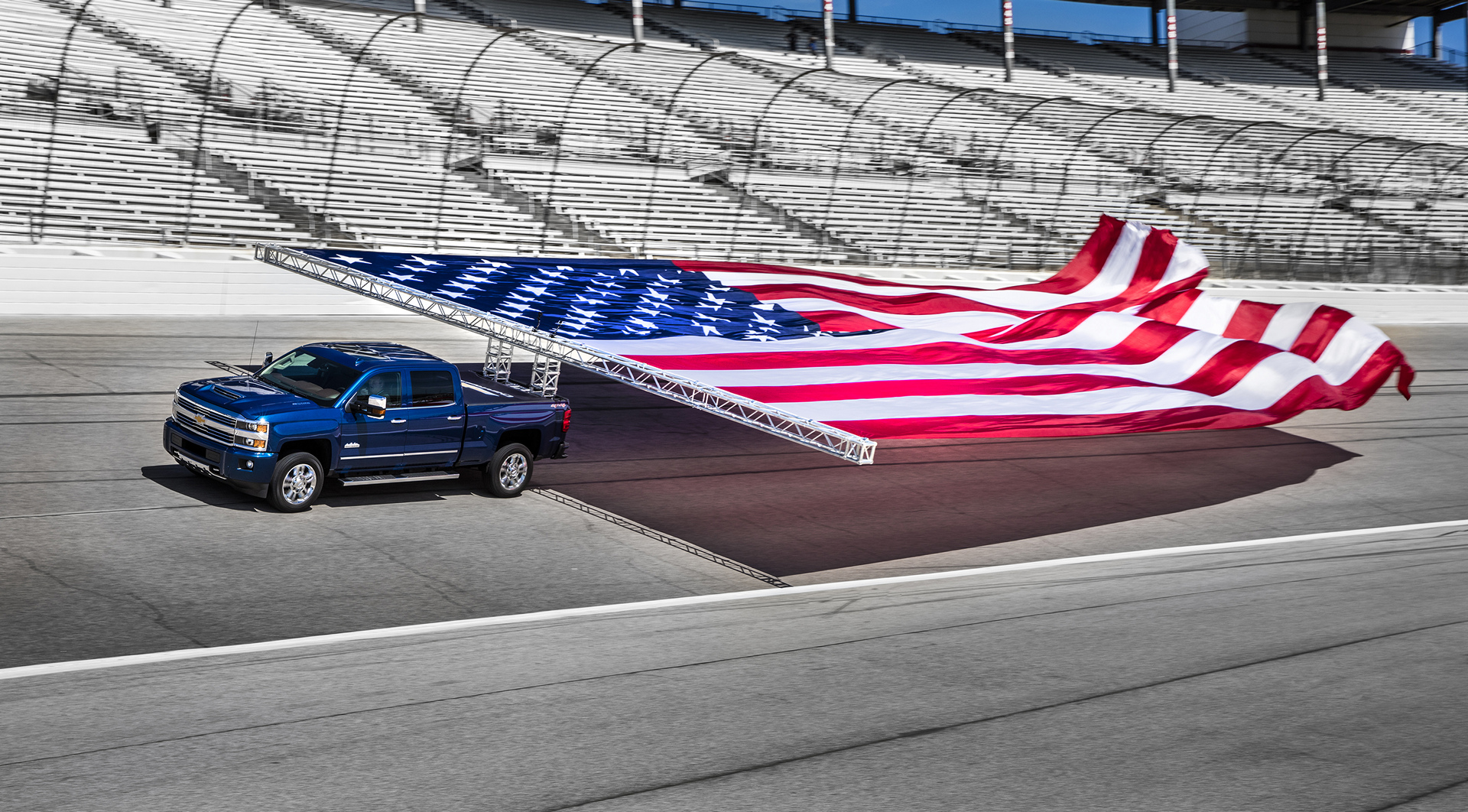 Chevrolet today set the Guinness World Records™ title for the World’s Largest Flag Pulled by a Moving Vehicle, and did it with a 2017 Silverado HD powered by a new, more powerful version of the Duramax 6.6L V-8 turbo-diesel engine. 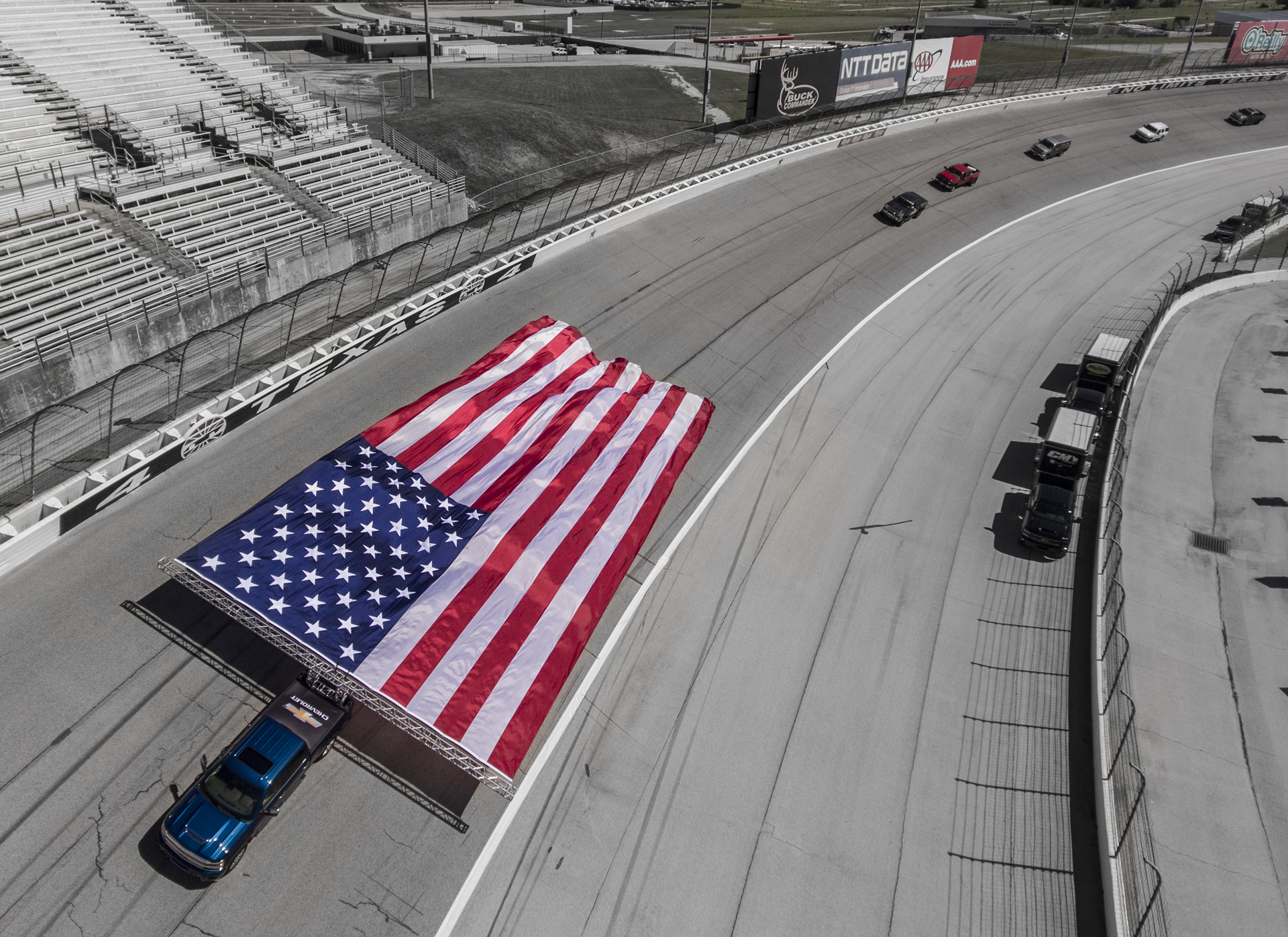 With an SAE-certified 445 horsepower (332 kW) and 910 lb.-ft. of torque (1,234 Nm) — a 19 percent increase over the current Duramax 6.6L — the new engine produces the most torque ever in a Chevrolet vehicle, for exceptional pulling power and effortless trailering and hauling. That includes flying nearly 3,200-square-foot flags.

“The Duramax 6.6L’s 445 horsepower and 910 pound-feet of torque are dramatic numbers, deserving of a dramatic introduction,” said Sandor Piszar, Chevrolet Truck marketing director. “And it’s all the more fitting to introduce it on the eve of the State Fair of Texas, in the country’s largest truck market.” 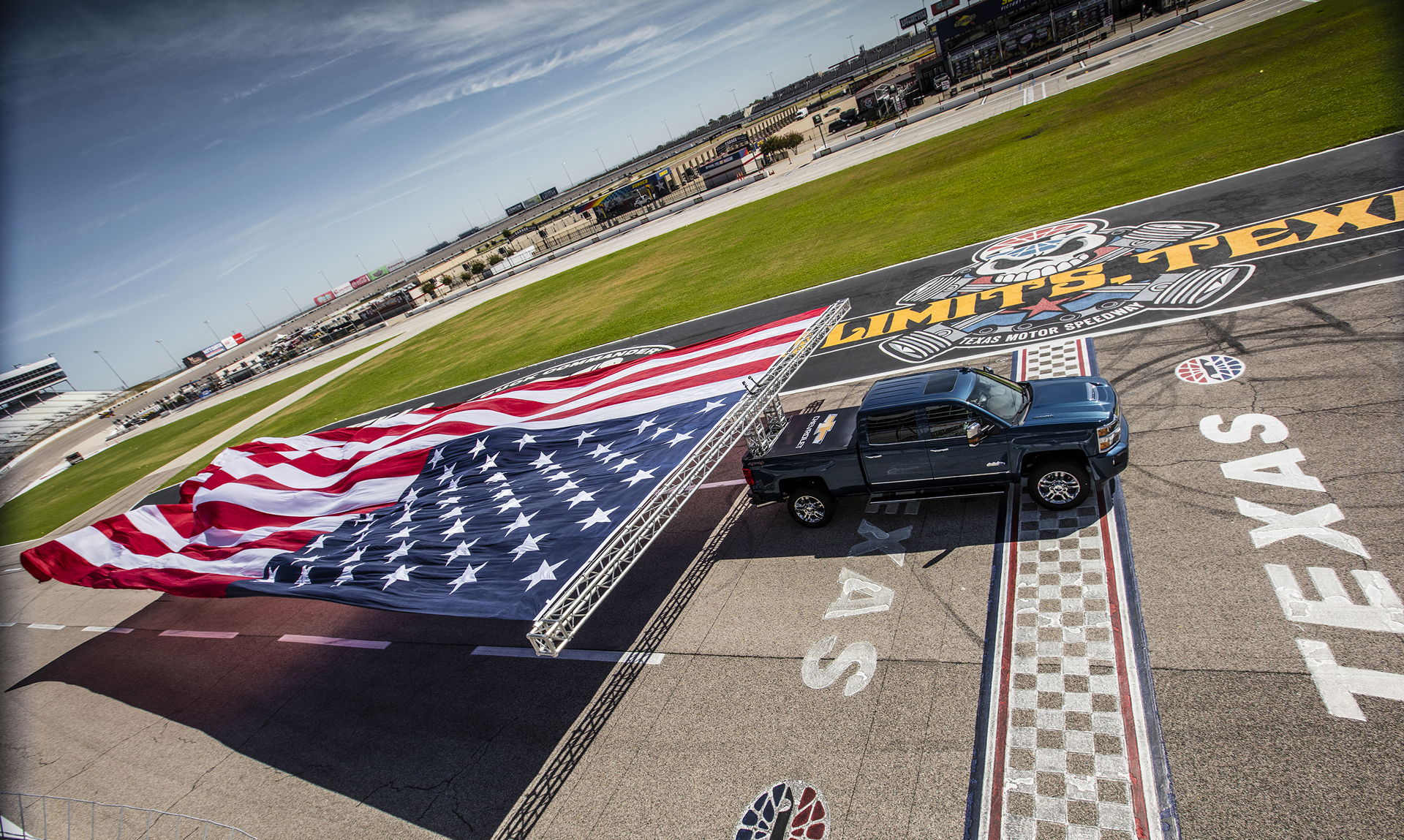 The United States flag flown by the Silverado HD for the record-setting drive measured nearly 40 by 80 feet, with an area of 3,186 square feet. To set the record, the truck had to travel 100 meters (328 feet) without the flag touching the ground. The Silverado more than exceeded that requirement, completing four laps around the Texas Motor Speedway’s 1.5-mile oval.

Chevrolet actually created two flags for the event: the U.S. flag used for the world record and a State of Texas flag to commemorate the start of the 2016 State Fair of Texas. Both flags will be on display at the State Fair through Oct. 23. 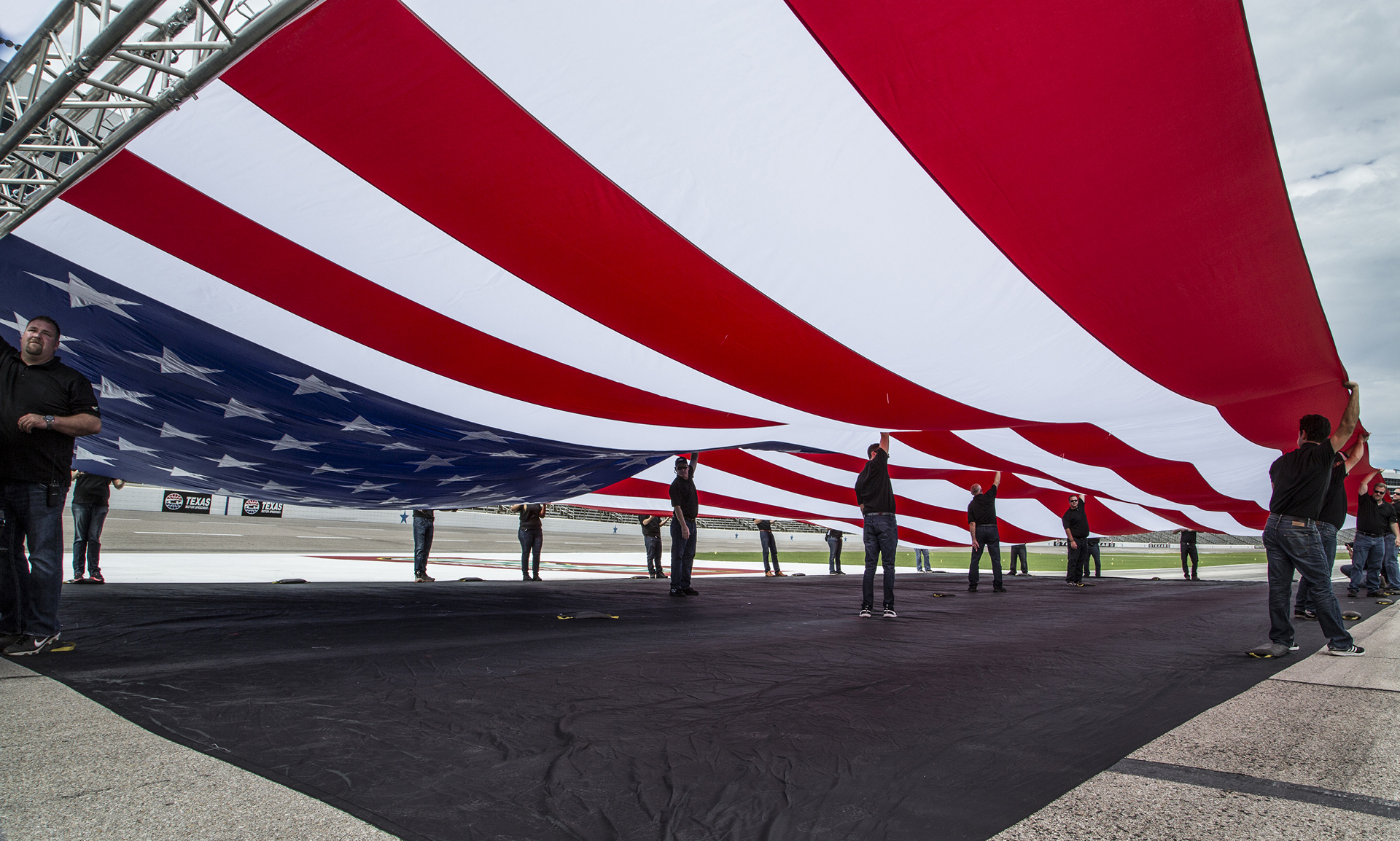 Unique 40-foot riggings on the trucks were designed to fold rearward, enabling the Silverado HDs to quickly enter and exit the track. That design requirement made it impossible to enable a driving roll-out of the massive flags. Instead, a team of 20 people launched and retrieved the flags, ensuring they did not touch the ground. 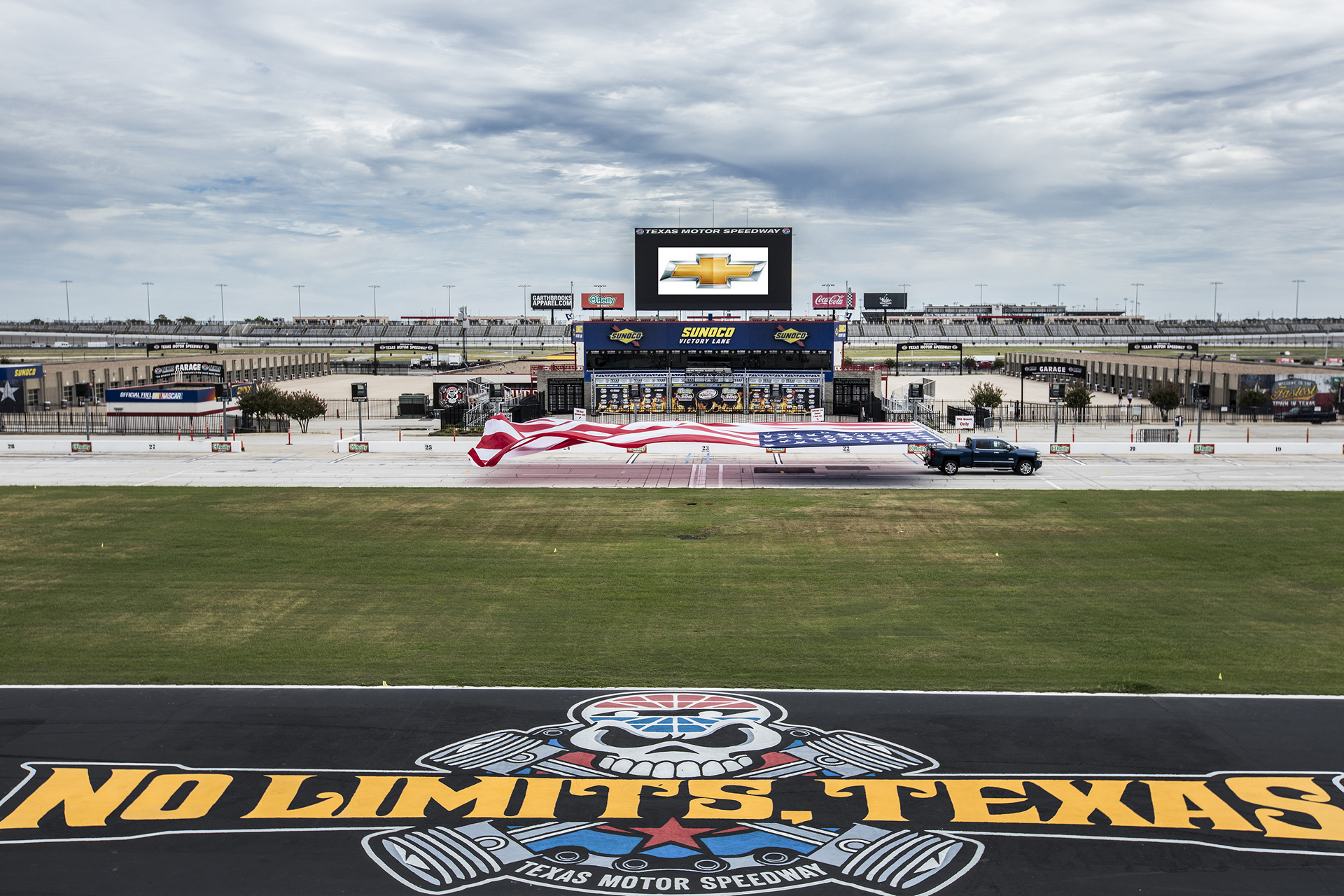 “The new Duramax delivers impressive output, but what customers will appreciate the most is an improved driving experience,” said Eric Stanczak, Silverado chief engineer. “It delivers quicker acceleration in virtually all measures, more confidence when trailering up a steep grade, better engine braking on descent and more refined noise levels cruising on the highway.”

The new Duramax 6.6L represents a next-generation redesign, featuring an all-new, stronger cylinder block and rotating assembly, as well as a new, GM-developed control system. The Duramax’s signature low-rpm torque production hasn’t changed, offering 90 percent of peak torque at a low 1,550 rpm and sustaining it through 2,850 rpm, an attribute that contributes to the Silverado HD’s strong, confident pulling power at low speeds.

Additionally, a new, patent-pending vehicle air intake system with functional hood scoop drives cool, dry air into the engine for sustained performance and cooler engine temperatures during difficult conditions, such as trailering on steep grades. Cooler air helps the engine run better under load, especially in conditions where engine and transmission temperatures can rise quickly. That allows the Duramax to maintain more power and vehicle speed when trailering in the toughest conditions.

The results improve the real-world towing experience for the heart of the HD market, with 89 percent of all HD customers purchasing trucks rated less than 25,000 pounds of towing capacity. For these customers, the new Duramax diesel in the 2017 Chevrolet Silverado HD offers:

For customers hauling cargo levels that require a commercial driver’s license, Chevrolet is expanding its line of commercial vehicles with two new offerings: a Low Cab Forward introduced for the 2016 calendar year, and an all-new conventional-cab, medium-duty truck developed with Navistar to be introduced in the future.