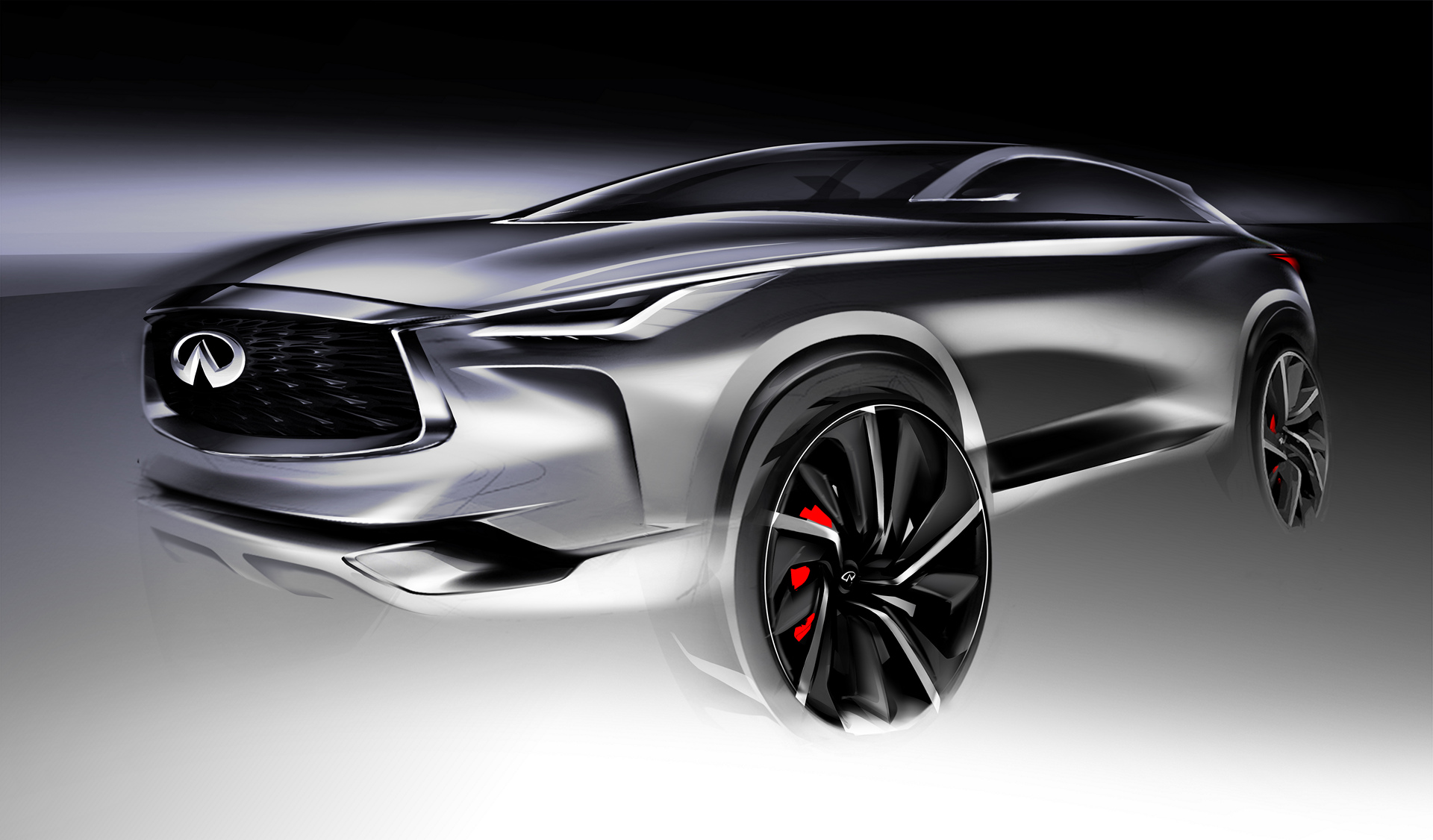 With the QX Sport Inspiration, Infiniti has started to explore the potential to expand its portfolio in the mid-size SUV market – one of the world’s largest and fastest-growing premium segments. Here is an interview with Alfonso Albaisa, Infiniti Executive Design Director, about QX Sport Inspiration. Q1: How does the QX Sport Inspiration influence the Infiniti SUV’s direction?
Albaisa: In the last few years we’ve been showing a lot of ‘on-road’ type of concept cars and launching them. With the QX Sport Inspiration, it’s now that we are showing the public what the SUVs will look like – that is, what happens to this artistry and muscularity when it starts to take on a more commanding presence.

Q2: Can you tell us how it expresses that commanding presence?
Albaisa: With the QX Sport Inspiration, a commanding presence is shown by a raised center of gravity, so we’re no longer focused on dropping the car to the ground or making it grounded. Now, we are trying to show its capabilities. By raising the centre of gravity and keeping it between the wheels, you are able to have the same sense of sculpture and artistry, but it now takes on the impression that it can go over any kind of road surface.

Q3 What was the inspiration for this design? Did nature and the environment play a part?
Albaisa: Infiniti models all have some inspiration from nature, with the organic shapes that are contrasted with very sharp, angular elements. This is how we mix and curate the palette. Strictly, I wouldn’t say that it’s inspired by nature as much as a sense of performance, which has some organic sense of muscularity and artistry.

Q4 The QX Sport Inspiration has organic flowing lines. How did the team execute those lines when they started to sketch the vehicle?
Albaisa: When the designers started, one of the first elements that we felt was natural to keep was the very strong and straight shoulder. What is happening with the QX Sport Inspiration is that the body has become a bit deeper, and it has a reverse wedge. This started to show up in the sketches of the designers, especially with the body core sweeping down to the rear wheel. Again, I think it gives it its ‘leaping’ quality that we don’t really use on the road cars but we find interesting for the SUVs.

Q5: How has the human artistry aspect manifested into the design of the unique parts of the QX Sport Inspiration?
Albaisa: Advanced human artistry that we started showing on the Q80 Inspiration has made its way into the QX Sport Inspiration, especially in the sense of the power coming from the engine. From the front wheel area, the body side is quite tight and it has the sense of muscular intention. As it opens up toward the rear, it’s delivering the power towards the rear wheels. This expression and how those sections transition towards the back is still where we exhibit this artistry.

Q6: How have the Infiniti design cues made their way into QX Sport Inspiration?
Albaisa: Like all Infiniti models, QX Sport Inspiration has our three common attributes. We have our ‘double-arch grille,’ our focused ‘human eye’ and of course our ‘crescent-cut ‘C’ pillar.’ On the grille, we have maintained the larger aspect that we have on Q60 and Q80, among others. Now, we are playing with the mesh on QX Sport Inspiration. It’s a mix between geometry and organic shapes, which we felt had this nice kind of granularity and detail. The focused human eye now has gone very high tech so each of the segments, the little box sections, are part of an intelligent adaptive system. This can follow people that cross into the way of the car and is also sensitive to oncoming traffic, so this kind of high tech – but still human eye aspect – we keep. Then, as you come around the side, the crescent-cut C-pillar is quite structural and it looks like it holds up the roof. But it still has this sense of artistry in its signature itself.

Q7: What does ‘power through proportion clarity’ mean?
Albaisa: We express in our architecture, power through proportional clarity. We use proportion at a glance as an identifier for Infiniti. This comes back to the first FX, currently the QX70. At a glance, you immediately notice the very long hood, very straight shoulder and a kind of pod-like cabin, which was set back. It was a silhouette in a proportion that you would never forget. We’ve learned from this and we bring it to every car, so that in this kind of clarity the proportion has a signature. The proportion has a power, expresses a power in the engine and the drivetrain. These are the fundamental steps of Infiniti design.

Q8: Can you tell us a bit more about the stance of this car?
Albaisa: One of the things that we really like about QX Sport Inspiration is that it’s leaning forward, ready to pounce, ready to leap, can go over anything. But it still maintains a very chic, elegant artistry. This is how we keep an Infiniti DNA, regardless of the segment.

Q9: How have you introduced the muscularity into the design of QX Sport Inspiration?
Albaisa: When we were setting the architecture and the muscularity, the body side exudes this sense that the core is tight and opens up towards the back. An arching, downward motion gives you a feeling that the muscularity, or the gesture of the vehicle, is going to pounce, is going to leap, that it can go over any terrain that it encounters. This is part of the SUV DNA of Infiniti.

Q10: What does ‘Powerful Elegance’ mean in relation to the QX Sport Inspiration?
Albaisa: Every Infiniti has ‘Powerful Elegance,’ no matter the segment or the age group of the customer, because they buy into this culture that Infiniti has, where we can mix something in the soul that is powerful, expressive, but also has a nuanced artistry that is almost in contrast or opposition. QX Sport Inspiration does this in a similar way to the Q80 Inspiration, in the sense of the artistry of the body, the way nothing stays the same – the sections through the body side are transitioning, they tense and release, they surround the wheel openings in a very beautiful way. So the artistry is always in the sculpture.

Q11: Does the QX Sport Inspiration signal a new exploration into the SUV sector for Infiniti?
Albaisa: The QX Sport Inspiration is the first glimpse of what future Infiniti models will look like as SUVs. Of course, we have much more to come beyond SUVs but you are going to see, now, the beginning of the next generation of Infiniti SUV.

Q12: How do the interior materials reflect the new direction for future SUVs?
Albaisa: When you come inside the QX Sport Inspiration, the artistry is enhanced with the use of the hides and the leathers. We use saddle leather, which is quite thick and very hard to move over shapes. So those bits of surface tend to be sheer and somewhat linear or plainer. Then we have very smooth leather that is sliced, that is stretched out, exposing speakers from behind. So the QX Sport Inspiration inside is a very advanced sense of artistry; in the sense of the tailor, very experimental, a very high contrast as the blacks and the whites are next to each other, and quite bold. Also, the array of textures is quite impressive.

Q14: What does the future of all SUVs look like for Infiniti?
Albaisa: As we start to look at the genres of the SUVs, you’ll expect two or three cars that will have different degrees of commanding presence. If you look at today’s portfolio, we have our mid-size and slightly larger cars. So we’ll start to reveal, in shows to come, how these aspects from QX Sport Inspiration work their way through the portfolio.