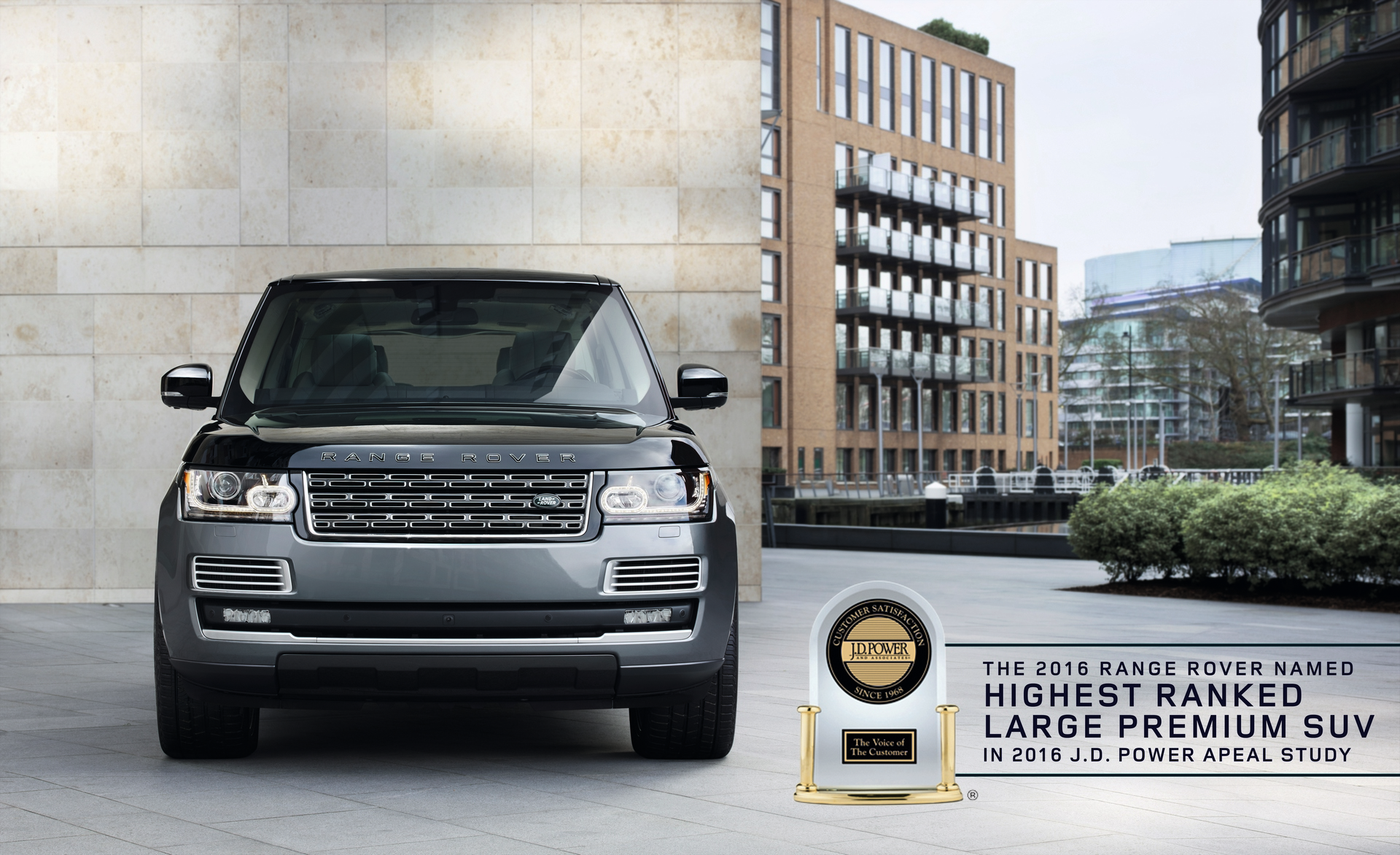 The Land Rover Range Rover has been named highest ranked Large Premium SUV in the J.D. Power 2016 Automotive Performance, Execution and Layout (APEAL) StudySM released today. This marks the fifth award for the brand’s flagship model in this category. Jaguar ranks 3rd among nameplates with a score of 852, while Land Rover ranks 5th among nameplates in a tie, with an overall score of 843.

The APEAL study examines the design and performance characteristics across 33 brand nameplates, which make a new vehicle a delight to own and drive, and is based on owner evaluations of 77 vehicle attributes.

This year, Land Rover ranks 5th place among brand nameplates with an overall score of 843. In addition to Range Rover receiving the Large Premium SUV award with a score of 872 and scores highest in the exterior, interior, driving dynamics and visibility safety factors, the Range Rover Evoque ranked 2nd in the Small Premium SUV segment scoring 826.

Developed from the ground up with characteristic levels of Range Rover refinement and all-terrain versatility, the fourth generation Range Rover captures the innovative spirit and iconic design of the original model which changed the world of motoring when it was launched over 40 years ago.

New for 2016, the Range Rover HSE receives an enhanced V6 gasoline engine tuned to produce 380hp (a 40hp increase over previous models), while both SE and HSE models are now available with an efficient diesel powertrain option for the first time in North America. Producing 254hp and 440 lb-ft of low-end torque, the Td6 engine provides excellent performance, reduced fuel costs and an exceptional cruising range of up to 658 miles on the highway. Towing capability remains unchanged at 7,716lbs.

The APEAL Study serves as the industry benchmark for new-vehicle appeal. The Study, now in its 21st year, measures owners’ emotional attachment and level of excitement across 77 attributes, ranging from the power they feel when they step on the gas to the sense of comfort and luxury they feel when climbing into the driver’s seat. These attributes combine into an overall APEAL Index score that is measured on a 1,000-point scale.

The APEAL Study is used extensively by manufacturers worldwide to help them design and develop more appealing vehicles and by consumers to help them in their purchase decisions. It complements the J.D. Power Initial Quality StudySM (IQS), which focuses on problems experienced by owners during the first 90 days of ownership. The 2016 U.S. APEAL Study is based on responses gathered from February through May 2016 from more than 80,000 purchasers and lessees of new 2016 model-year cars and light trucks who were surveyed after 90 days of ownership.