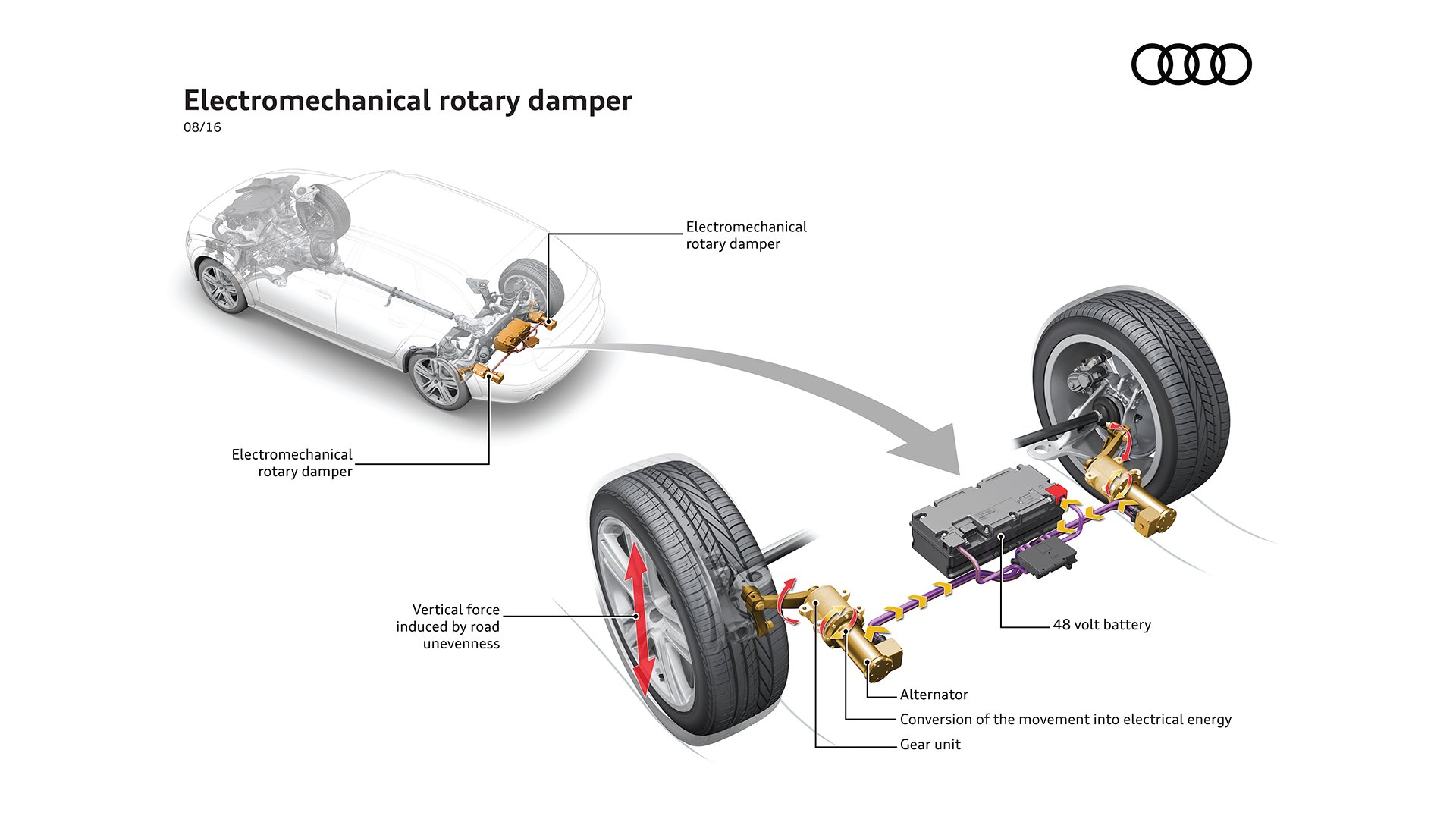 In the mobility of the future, the recuperation of energy plays an increasingly important role, including in a car’s suspension. Audi is working on a prototype called “eROT,” in which electromechanical rotary dampers replace the hydraulic dampers used today for an even more comfortable ride.

The principle behind eROT is easily explained: “Every pothole, every bump, every curve induces kinetic energy in the car. Today’s dampers absorb this energy, which is lost in the form of heat,” said Dr.-Ing. Stefan Knirsch, Board Member for Technical Development at AUDI AG. “With the new electromechanical damper system in the 48-volt electrical system, we put this energy to use. It also presents us and our customers with entirely new possibilities for adjusting the suspension.”

The eROT system responds quickly and with minimal inertia. As an actively controlled suspension, it adapts ideally to irregularities in the road surface and the driver’s driving style. A damper characteristic that is virtually freely definable via software increases the functional scope. It eliminates the mutual dependence of the rebound and compression strokes that limits conventional hydraulic dampers. With eROT, Audi configures the compression stroke to be comfortably soft without compromising the taut damping of the rebound stroke. Another advantage of the new damper system is its geometry. The horizontally arranged electric motors in the rear axle area replace the upright telescopic shock absorbers, which allows for additional space in the luggage compartment.

The eROT system enables a second function besides the freely programmable damper characteristic: It can convert the kinetic energy during compression and rebound into electricity. To do this, a lever arm absorbs the motion of the wheel carrier. The lever arm transmits this force via a series of gears to an electric motor, which converts it into electricity. The recuperation output is 100 to 150 watts on average during testing on German roads – from 3 watts on a freshly paved freeway to 613 watts on a rough secondary road. Under customer driving conditions, this corresponds to a CO2 savings of up to three grams per kilometer (4.8 g/mi).

Initial test results for the eROT technology are promising, thus its use in future Audi production models is certainly plausible. A prerequisite for this is the 48-volt electrical system, which is a central component of Audi’s electrification strategy. In the next version planned for 2017, the 48-volt system will serve as the primary electrical system in a new Audi model and feed a high-performance mild hybrid drive. It will offer potential fuel savings of up to 0.7 liters per 100 kilometers.