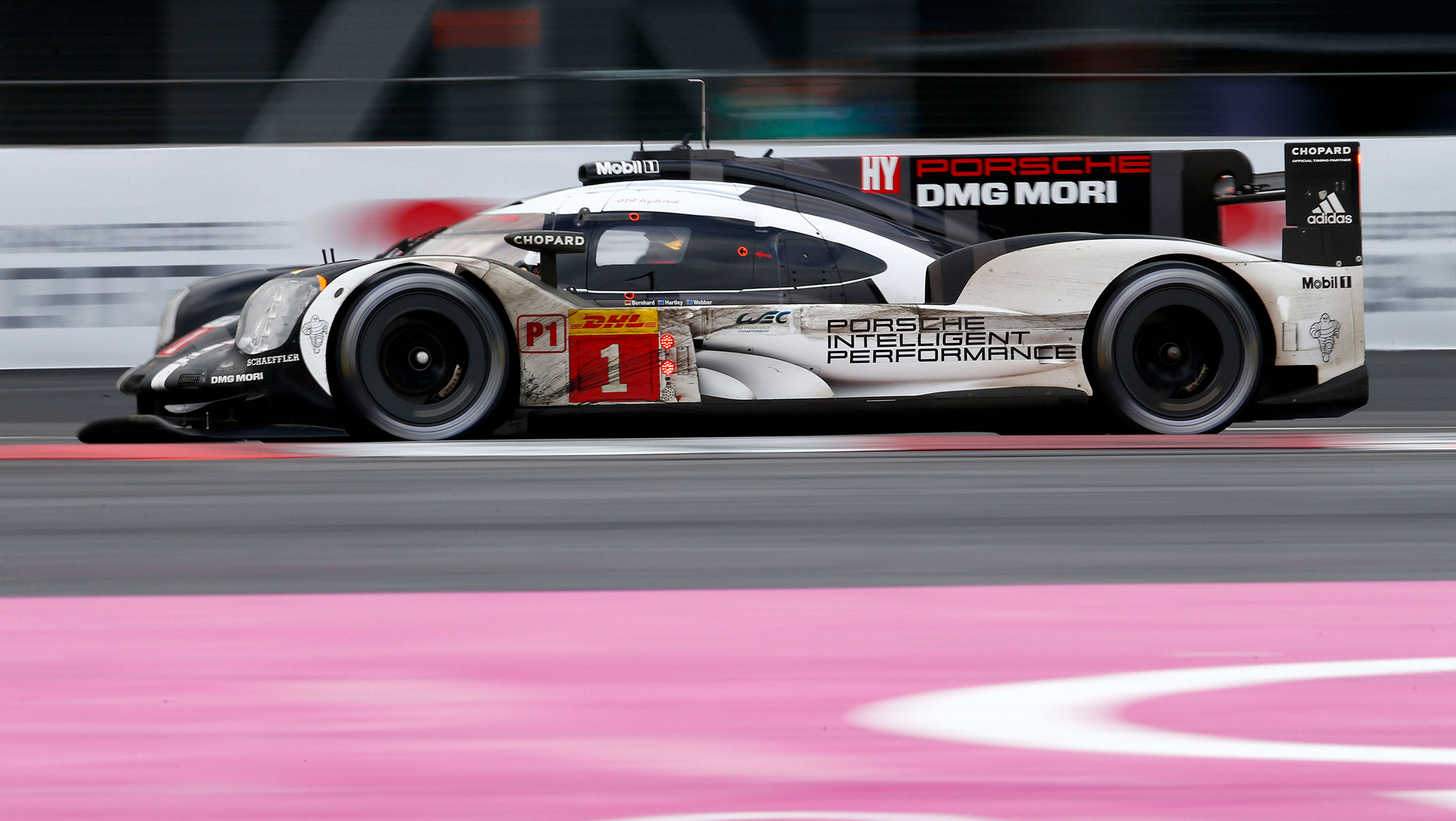 Timo Bernhard, Brendon Hartley and Mark Webber have won the thrilling six-hour race in Mexico City. By winning the fifth round of the FIA World Endurance Championship (WEC), with the 919 Hybrid Porsche further extended its lead.

How the race went in the LMP1 class

The trio of Romain Dumas (FR), Neel Jani (CH) and Marc Lieb (DE) came fourth in the race on Saturday and extended their lead in the drivers’ world championship. The fastest race lap on the 4.304 kilometre Formula One track was achieved by Brendon Hartley in 1:25.880 minutes on lap 114. 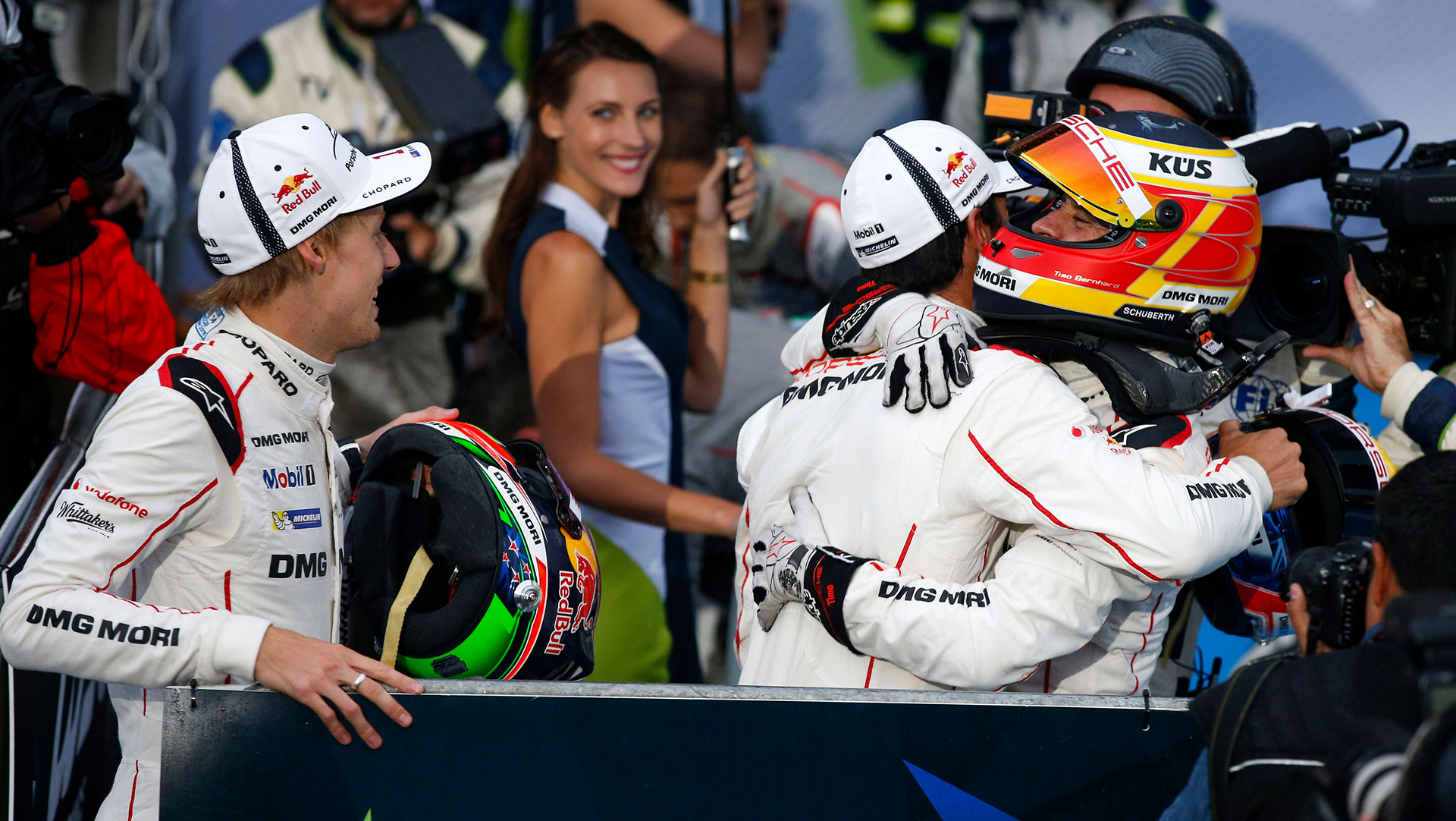 In total this is the 11th victory for the innovative Porsche 919 Hybrid prototype since its 2014 debut. In the current season the 919 has won four races, including the Le Mans 24 Hours. For Bernhard/Hartley/Webber it is their sixth WEC success. Porsche now leads the manufacturers’ standings with 201 points ahead of Audi (158) and Toyota (112). Dumas/Jani/Lieb lead the drivers’ standings by 41 points.

How the race went for car number 1:

Brendon Hartley starts from fourth, overtakes his team mate Marc Lieb in the sister car in turn one and gets behind the two Audis. On lap 21 he overtakes the number 7 Audi (André Lotterer) for second place. After 35 laps Hartley uses a Full Course Yellow for an early pit stop and hands over the car to Mark Webber, who continues in second place on fresh tyres. Just after the re-start Webber takes the chance to pass the number 8 Audi (Lucas Di Grassi) for the lead. Now he is the hunted and defends the lead until the penultimate lap before his pit stop. After 74 laps Webber pits, right behind Di Grassi. The Porsche pit crew is faster – Timo Bernhard leaves the pits as the race leader. After 110 laps he has extended the gap to over ten seconds. Then the team uses the next Full Course Yellow to call both 919s into the pits. For a moment it had been unclear if the stop should be after 109 or 110 laps, which is why Bernhard continued on track after crossing the white line at the pit lane entrance. He is penalised for this. Brendon Hartley comes in for a stop and go penalty after 120 laps and loses the lead until lap 134, when he wins a battle against the number 8 Audi (Loic Duval) in the baseball stadium section. After 137 laps Hartley changes to rain tyres and continues. On lap 140 the number 8 Audi (Oliver Jarvis) slips off the track. 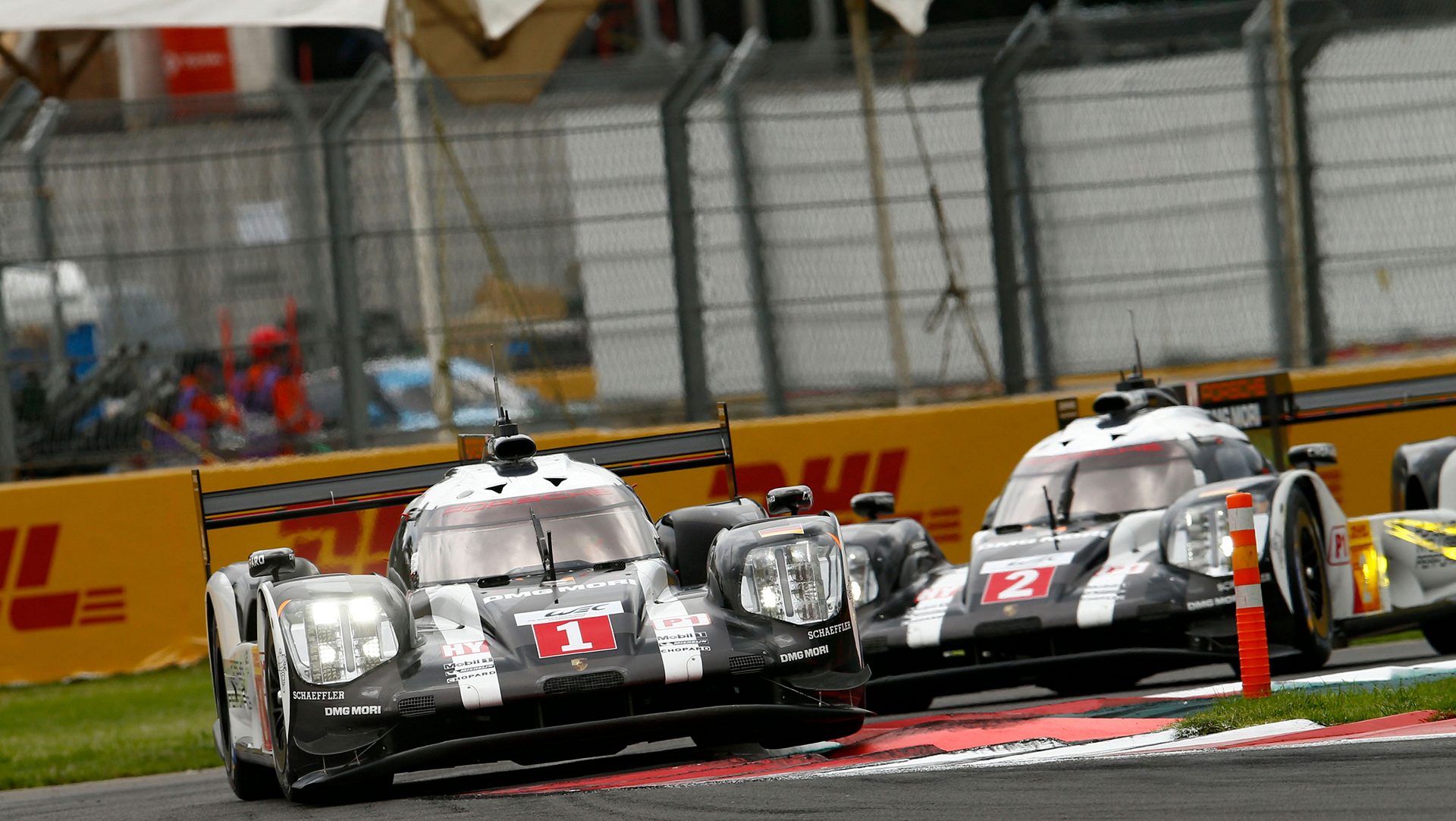 After two thirds of the race Porsche is leading with a one-two. After 162 laps Hartley hands over to Bernhard, who rejoins the race on intermediate tyres. Meanwhile he drives in P2, because the number 7 Audi with Lotterer at the wheel has impressively recovered from dropping back earlier. When Lotterer pits after 172 laps, Bernhard is back in the lead. After 199 laps he comes in for a final tyre change onto slicks. He brings home the race win after 230 laps, despite increasing rain and an off on lap 226. 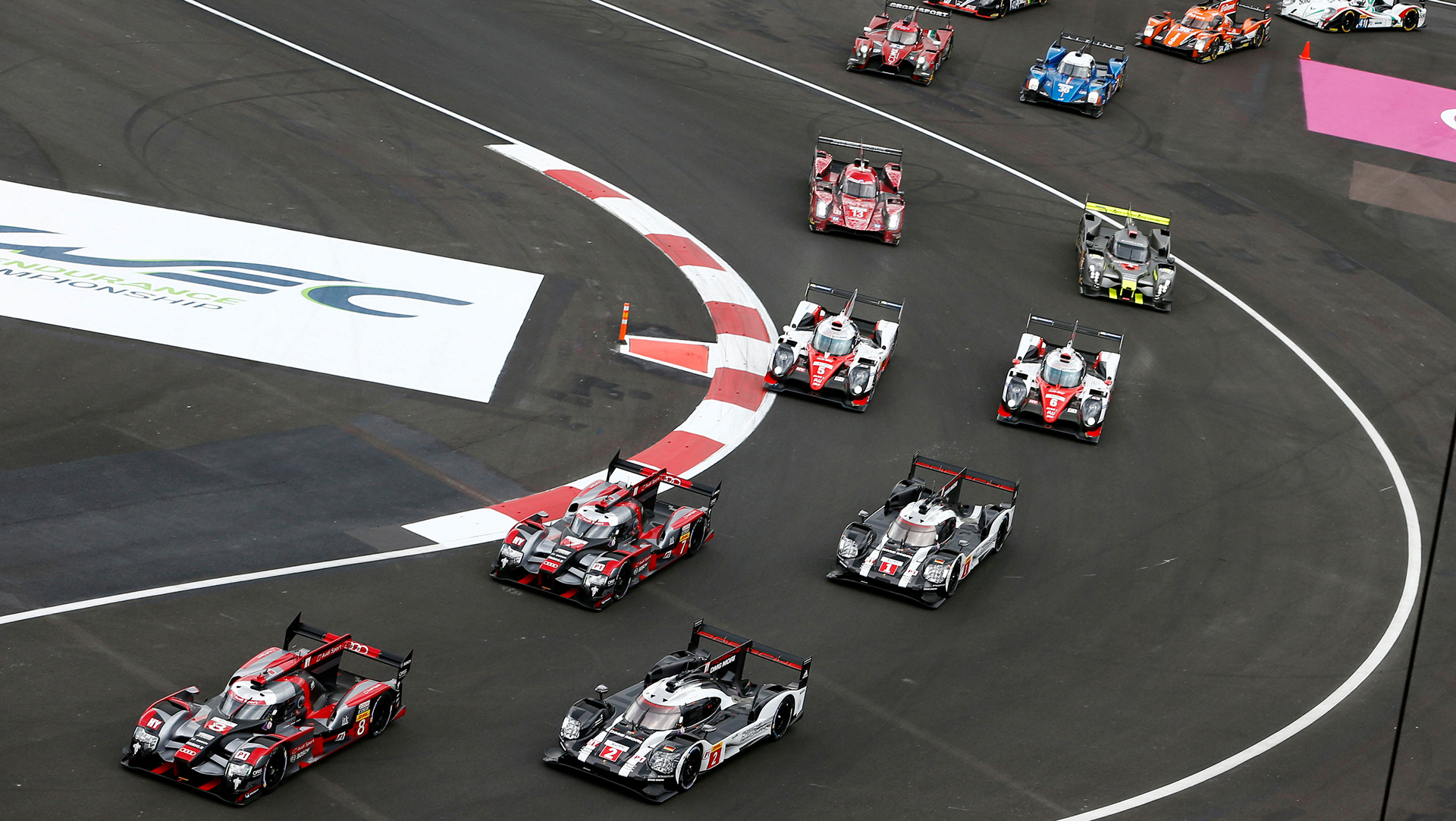 How the race went for car number 2:

Marc Lieb drops back from second to fourth at the start. When the number 7 Audi (Lotterer) stops he improves to third. At its first pit stop after 35 laps the number 2 Porsche loses some time, because the pit stop at the same time as the sister car causes a time consuming situation when leaving the pit. Neel Jani drops back to fourth behind the number 5 Toyota (Kazuki Nakajima). Between the two a duel develops that Jani wins on lap 40. After 75 laps, and during another Full Course Yellow, Jani hands over to Romain Dumas, who continues in P3. He constantly reduces the gap to the front and hands over to Lieb after 110 laps. Again the double pit stop with the sister car is necessary, but not easy to handle. Lieb continues in second. On lap 127 he is overtaken by Hartley. In turn he hunts down Duval in his Audi on lap 136 and is second again. One lap later Lieb picks up rain tyres and continues. On lap 148 he is touched by an LMP2 car, which causes part of the bodywork from the rear left to come off. After 154 laps, and on instructions from race control, Lieb has to pit for a new rear end. He drops back to third. His rain tyres are a handicap on the now drying track, so on lap 166 the number 6 Toyota (Stéphane Sarrazin) gets past him as well. After 169 laps Lieb hands over to Jani, who continues on intermediate tyres. Because the Porsche pit crew did a faster stop than the Toyota team, Jani improves to third. On lap 178 he gets past by the Toyota again. After lap 194 Jani comes in for another early pit stop to change from intermediates to slicks. Dumas takes over for the final stint and brings the car home in P4.

How the race went in the GT classes 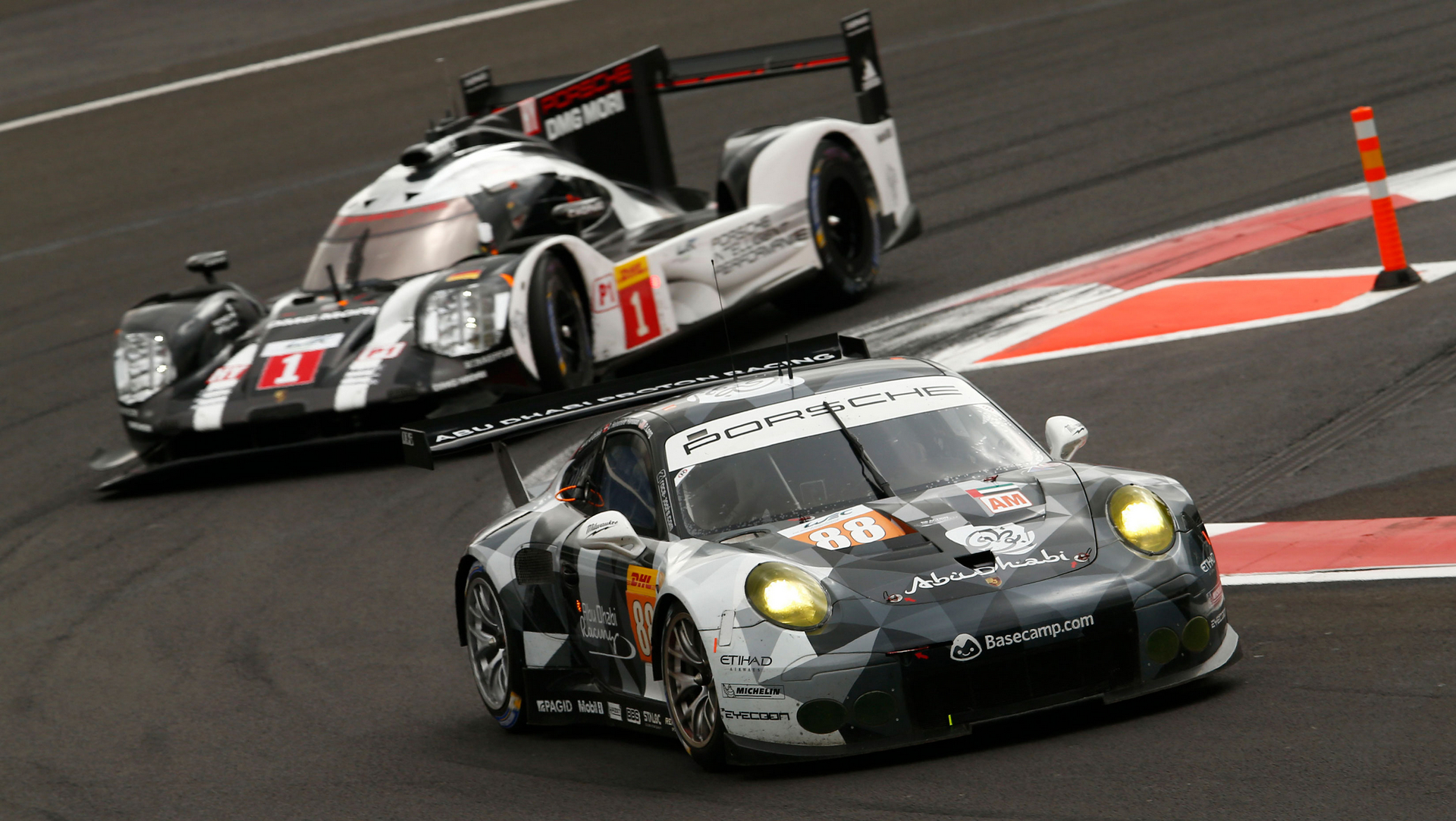 Great success for Porsche customer teams at the premiere of the WEC Sports Car World Endurance Championship in Mexico: With the Porsche 911 RSR, Abu Dhabi Proton Racing won the GTE-Am class at the Autódromo Hermanos Rodríguez circuit with the team celebrating its maiden WEC victory in front of 38.000 spectators. Sharing driving duties in the cockpit of the winning racer from Weissach was Porsche’s works driver Patrick Long (USA) with Khaled Al Qubaisi (Abu Dhabi) and David Heinemeier Hansson (Denmark).

In the GTE-Pro class the situation was looking promising for third place for the Porsche works drivers Richard Lietz and Michael Christensen in Dempsey Proton Racing’s 911 RSR, but as rain set in about halfway through the race on the Mexico City Grand Prix circuit at a 2,310-metre altitude, they dropped down the field after making an unfortunate tyre choice. The pair took the flag in sixth place.

Quotes after the race

Fritz Enzinger, Vice President LMP1: “This was one of the most thrilling races I have ever seen – because of the enormous competition and also due to the changing track conditions. First and fourth means we’ve got a lot: another race win plus extending the lead in both the manufacturers’ and the drivers’ world championship. Many thanks to everybody! Now we return home to Weissach to make in-depth preparations for the coming race in Austin. In two weeks we want to push our mission further to defend both titles.”

Andreas Seidl, Team Principal: “What a race – once again all three manufacturers were on the podium. We managed to extend our lead in both championships, which means another step on the way to our mission of defending both World Championship titles. Congratulations to the entire team for this challenging weekend and race. Today it was difficult to get all the decisions right. For the number 1 car it worked perfectly and they deserved to win the race. For the number 2 crew our strategy didn’t work out in the changing weather conditions. On top of that, we had an incident when a LMP2 car touched the rear of our car. Afterwards we focussed on bringing home points for the championship. Also on this special circuit we have proven that our car can win a race. This makes us confident for the remaining rounds of the championship.”