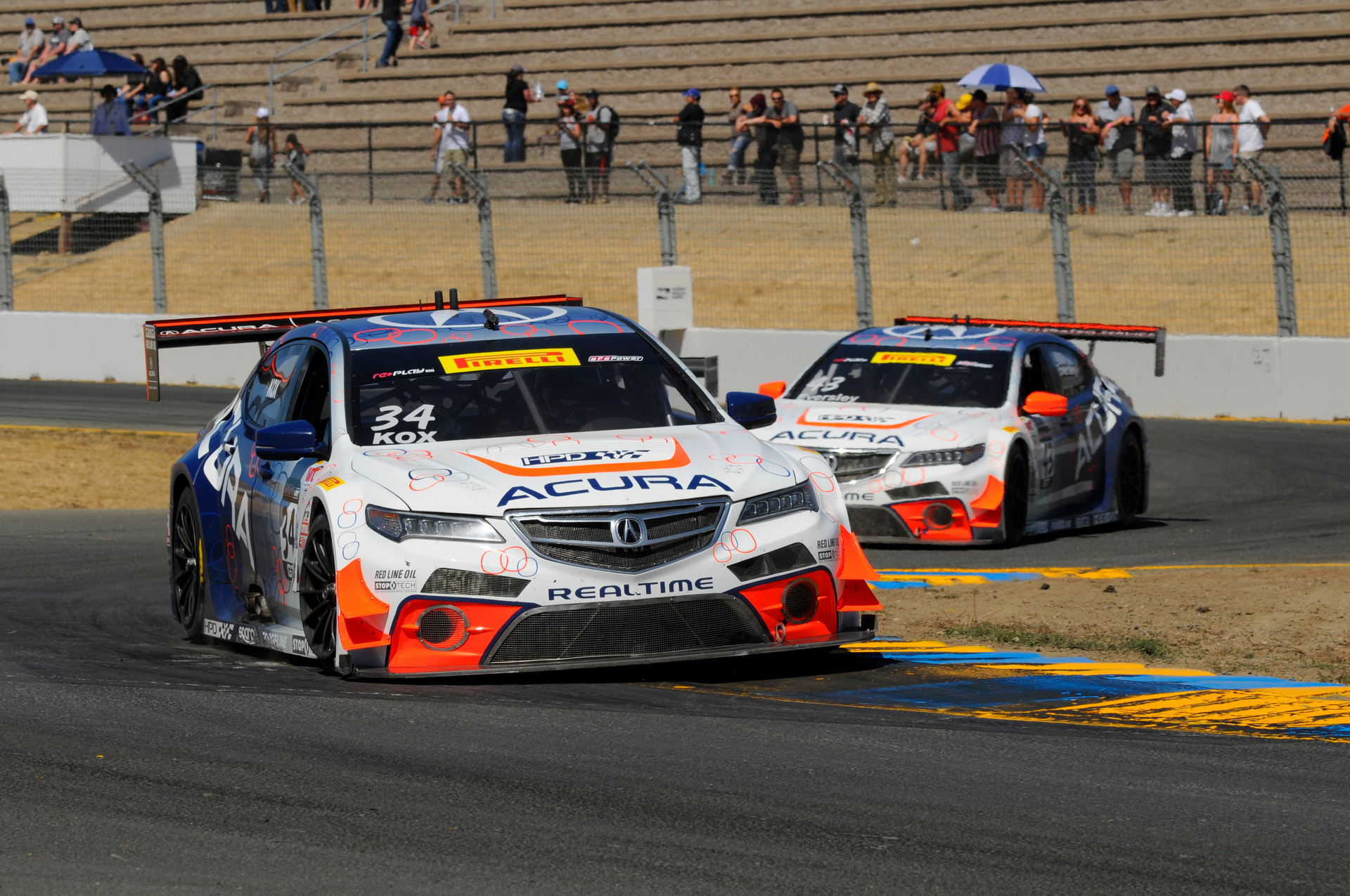 The RealTime Racing Acura TLX GT squad dealt with its share of adversity over the weekend at Sonoma, but persevered through a pair of tough Pirelli World Challenge races to earn two top-10 results.

Looking to solidify a spot in the top five of the PWC GT drivers’ standings, Ryan Eversley earned solid points-paying finishes of 10th and 12th in the weekend’s two events. Meanwhile, Peter Kox made his first-ever PWC starts in the #34 Acura TLX and came away with a 15th-place run in the opener on Saturday, and a 10th-place finish in Sunday’s event.

“On the surface it was a tough weekend. However, having two TLX GTs run every lap of both races is a victory in itself,” said Senior Program Engineer/Honda Performance Development, Lee Niffenegger. “Both our drivers made the best of it. It was disappointing for Ryan to get impeded at the start of Race 2, but it was nice to see Peter come to grips with Sonoma and the TLX GT on a race weekend with no test day.”

Eversley finished in the same spot in which he qualified after Saturday’s race, then made up a spot in Sunday’s round to place 12th as both cars finished on the lead lap in both of the weekend’s races.

“Sonoma was tough on our Acura TLXs but I’m really happy with how well the team performed, given the uphill challenge presented at this track,” Eversley reported. “We didn’t have the outright pace, but I think we maximized our results this weekend and we have two complete cars headed to Laguna Seca in a few weeks’ time. Thanks to Acura, RealTime and Honda HPD for the opportunity!”

Kox, who had been spending most of his recent track time as the development driver of the new Acura NSX GT3 machine, climbed six positions from his starting spot on Sunday to claim his first top-10 result in the series.

The team now has one race remaining in the Acura TLX GT cars in 2016, before transferring to the new NSX GT3 for 2017. But there is a good bit riding on the Oct. 9 season finale at Mazda Raceway Laguna Seca, as Eversley and Bryan Heitkotter will come into the last race of the year in a very tight battle for fifth place in the season championship.

“Now we head to the final PWC race weekend for the TLX GT. It marks the end of one era and the beginning of another,” Niffenegger remarked. “We did well in Monterey last year and hope to help Ryan secure a top five points result after a very strong season.”

Video recaps from this weekend’s Acura Pirelli World Challenge racing activities in Sonoma are being posted on the “Honda Racing/HPD” YouTube channel. Produced by the Carolinas Production Group, the video packages can be found in the 2016 HPD Trackside Video Playlist at: