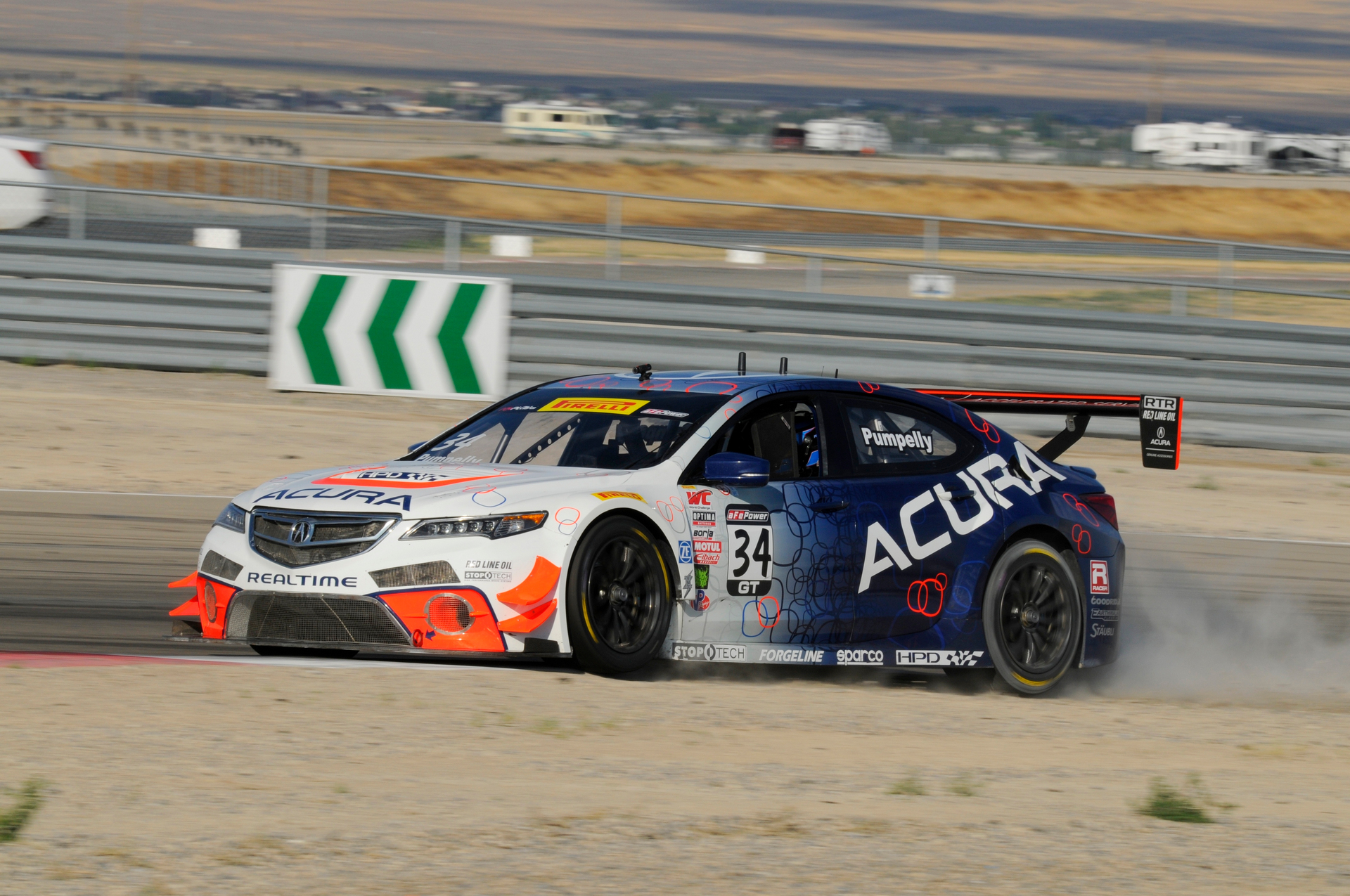 The RealTime Racing Acura TLX GT squad kept its march toward the front of the Pirelli World Challenge grid going on Saturday at Utah Motorsports Campus, but Sunday’s event showed that all good things must come to an end.

Ryan Eversley had another one of his vaunted starts on Saturday, taking advantage of some contact to gain 10 places on the opening lap on his way to a fourth-place finish in Round 16 of the PWC GT championship – marking his sixth consecutive top-five result. Meanwhile, new Acura driver Spencer Pumpelly fought tooth-and-nail with Jon Fogarty on Saturday to earn his second eighth-place run in his first three races in the Acura TLX GT.

But as strong as Saturday was for the Wisconsin-based RealTime Racing squad, Sunday was every bit as disappointing for the hard-charging Acuras. Pumpelly suffered an uncharacteristic drivetrain problem that kept his #34 machine from completing a single lap of the 3.048-mile course, while Eversley saw a chance at a seventh consecutive top-five go by the wayside when his #43 machine was felled by a left-rear suspension problem.

“Overall, a tough weekend in Utah. A rare mechanical issue on Sunday in the driveline of Pumpelly’s car turned into a double mechanical when a small component in the left rear broke on Eversley’s TLX GT,” said Senior Program Engineer/Honda Performance Development, Lee Niffenegger. “Ryan had some heads-up driving to move to second early in Race 1, then held on with a great drive against cars that were faster this weekend to pull off a fine fourth place. Unfortunately, our run of good finishes ended, and now we need to start a new one to finish the season strong in California.”

Eversley ran as high as second in Saturday’s opener before settling for a hard-fought fourth-place finish. The second-year Acura pilot fought off a last-lap charge from Colin Thompson’s McLaren to keep the fourth spot, beating Thompson to the line by a microscopic .008 seconds. Pumpelly battled back after losing ground due to early contact ahead of him, and fought equally hard on the final lap of the weekend’s first race, finishing just .101 seconds behind Fogarty in the battle for seventh.

“The #34 car was very good this weekend, but two competitors took each other out ahead of me in the first race,” Pumpelly reported. “The crash forced me to take evasive action going wide in Turn 1. Once I got back on track the field had gone by, relegating us to the back. We never recovered. Today [Sunday], the car had a drive-line issue before the race started, so we were not able to take advantage of the car’s pace in Race Two.”

“I’m really proud of how well we got the car handling today,” Eversley said. “I felt like I was able to move into the top five and hold my position and pace. I’m bummed we couldn’t get the Acura the result it deserved.”

The RealTime Acuras will have a full month to recover from Sunday’s disappointment, as the series does not compete again until September 17-18 at Sonoma Raceway, where Rounds 18 and 19 of the 20-race season will be contested on the California road course.