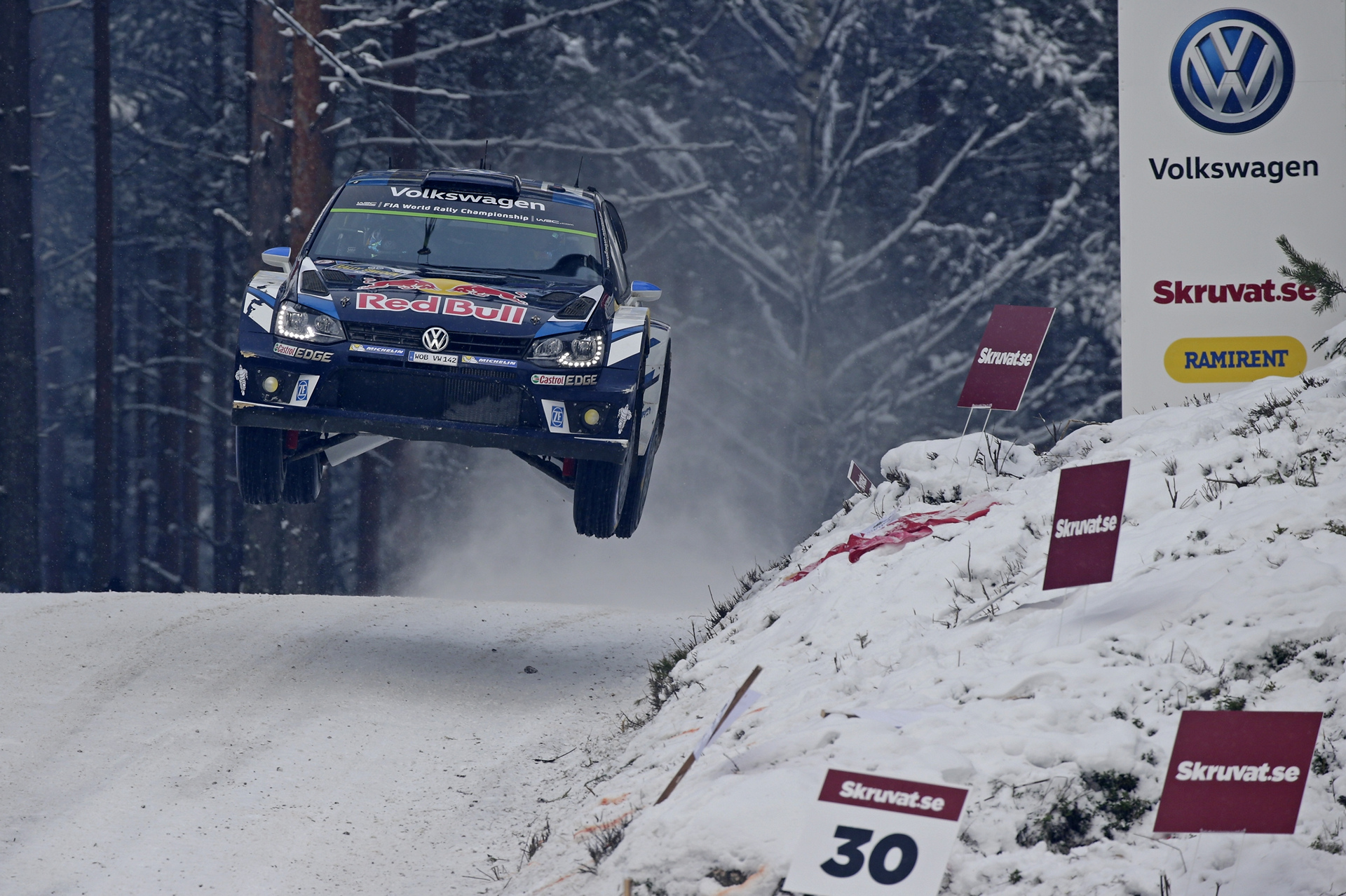 Four wins in a row at the only winter rally in the FIA World Rally Championship (WRC): Volkswagen won the Rally Sweden through Sébastien Ogier/Julien Ingrassia (F/F) and remains unbeaten on ice and snow with the Polo R WRC. For Ogier and Ingrassia, this latest victory was the third success in four years at this classic rally and their 34th in total. The road to victory demanded a herculean effort from the three-time world champions, for which Volkswagen was rewarded with its eleventh win in a row and 36th triumph in 41 rallies. Among those on-site to watch the latest success was Dr. Frank Welsch, Board Member for Development. 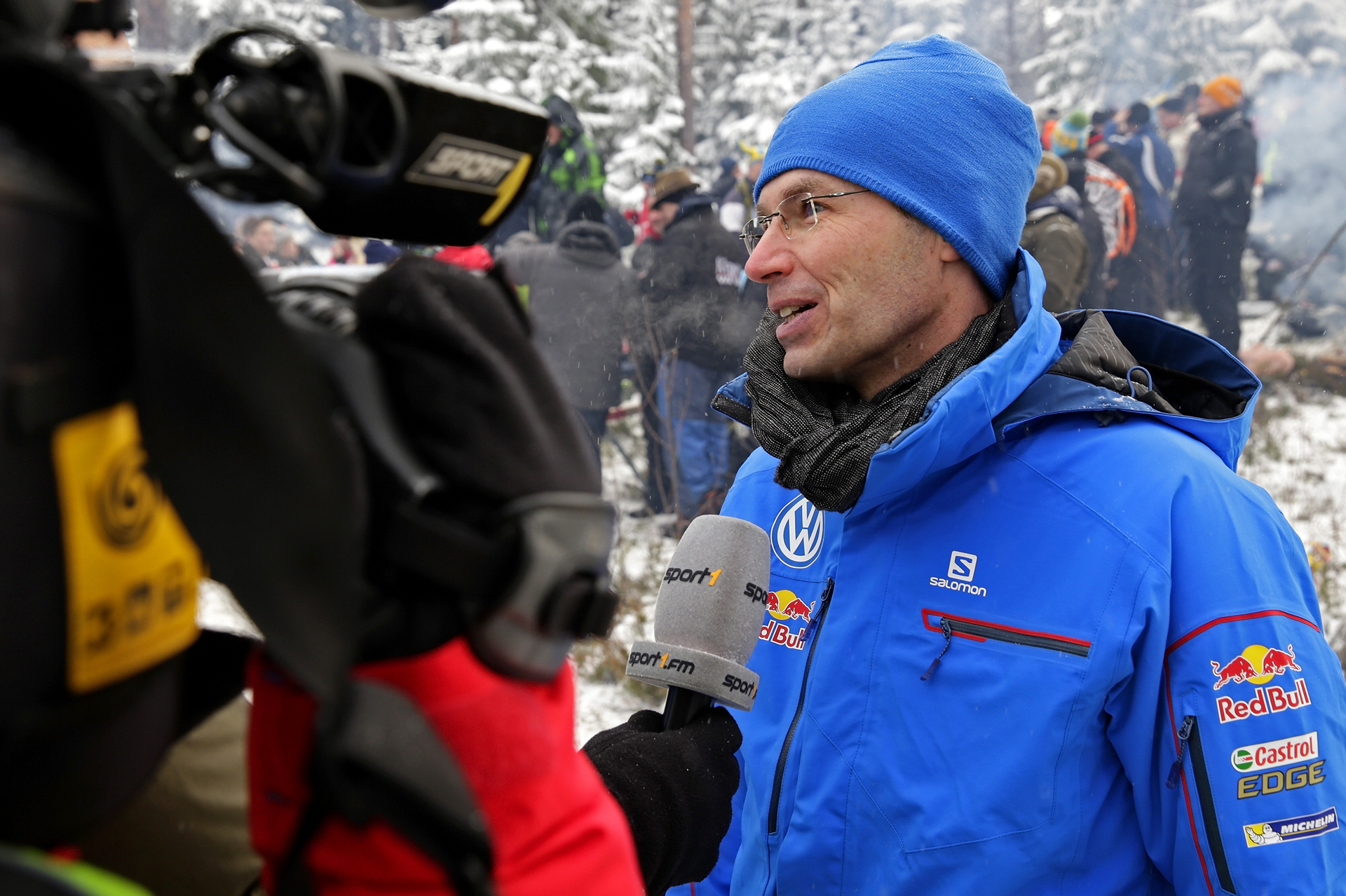 The duo overcame the challenge of opening the route on roads covered with a layer of fresh snow, and thus having to sweep the road clear for the following cars, with one of the best displays of driving and navigating in recent years. Andreas Mikkelsen/Anders Jæger (N/N) ended their home race in fourth place. In contrast, Jari-Matti Latvala/Miikka Anttila had to abandon any hope of a fourth victory at the Rally Sweden on Friday, when they suffered a broken drive shaft. 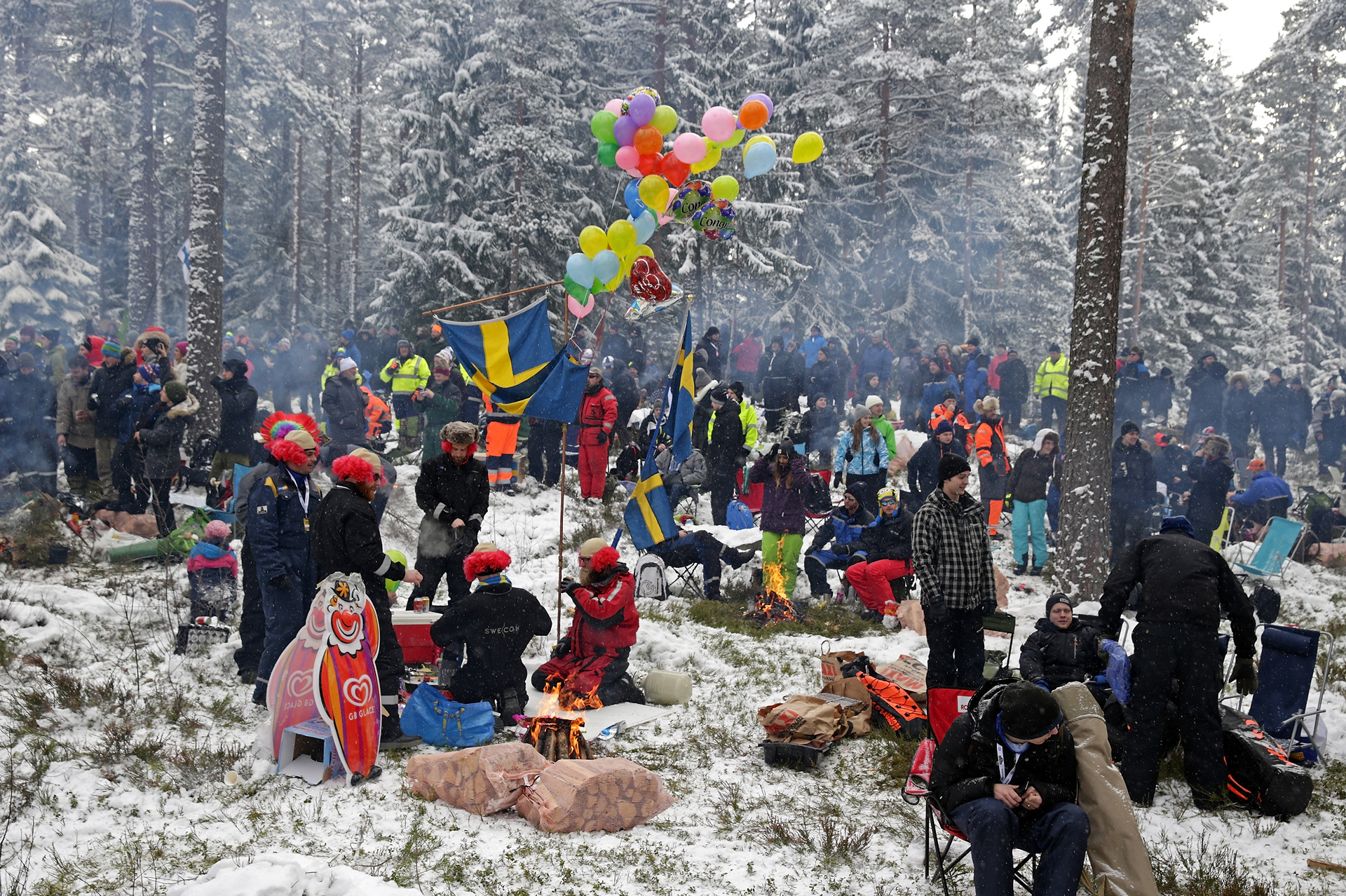 Temperatures above zero and persistent rain before the rally, heavy snowfall and frost during it: the competitors at the 2016 Rally Sweden had to battle changing and difficult conditions. During the Recce on Wednesday and Thursday, the special stages were dominated by soft loamy ground and mud. Once the rally started, and the cars hit full speed, they were faced with ice and fresh snow. Thanks to the huge commitment shown by the organiser and the many volunteers who worked tirelessly overnight to prepare the route, 68.37 per cent of the timed kilometres originally scheduled were completed. Full points are awarded if more than half of the route is completed.

Herculean task for Ogier and Mikkelsen, who opened 93 per cent of the route 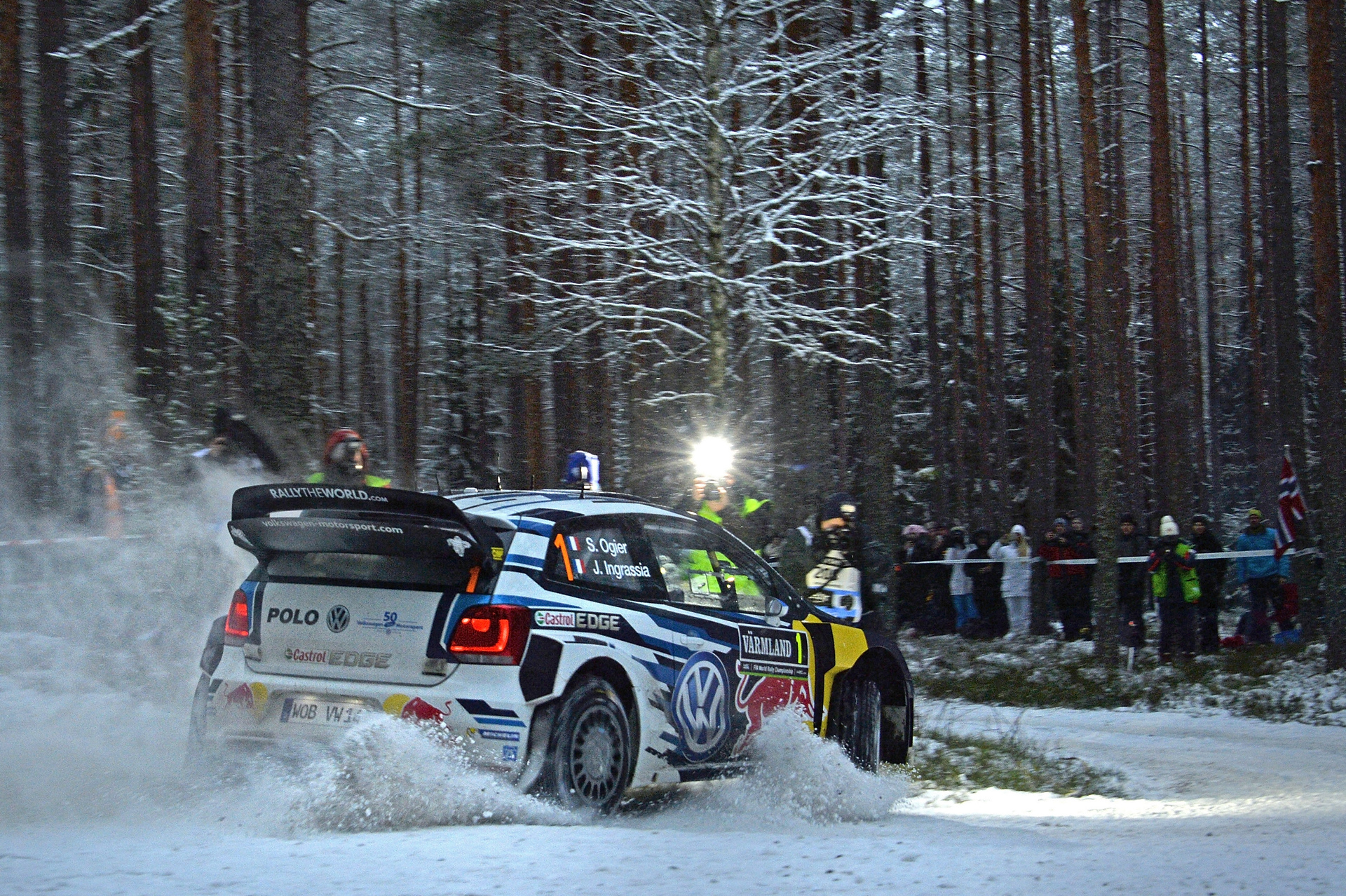 The onset of winter at exactly the right time presented Volkswagen duos Sébastien Ogier/Julien Ingrassia and Andreas Mikkelsen/Anders Jæger with a truly herculean task. After the new, reduced schedule, they were forced to open the route for 93 per cent of the rally. As such, they had no choice but to sweep the loose layer of snow from the stages for those behind them – particularly on Saturday – resulting in more grip with every World Rally Car that passed, and consequently allowing faster times. For Ogier/Ingrassia and Mikkelsen/Jæger, this meant flat-out at all times in order to challenge for victory and places on the podium. Ogier/Ingrassia were rewarded for their willingness to take risks. Mikkelsen/Jæger, on the other hand, left their home rally without a podium finish: small mistakes and off-road excursions cost valuable time and ultimately made the difference between victory and fourth place. 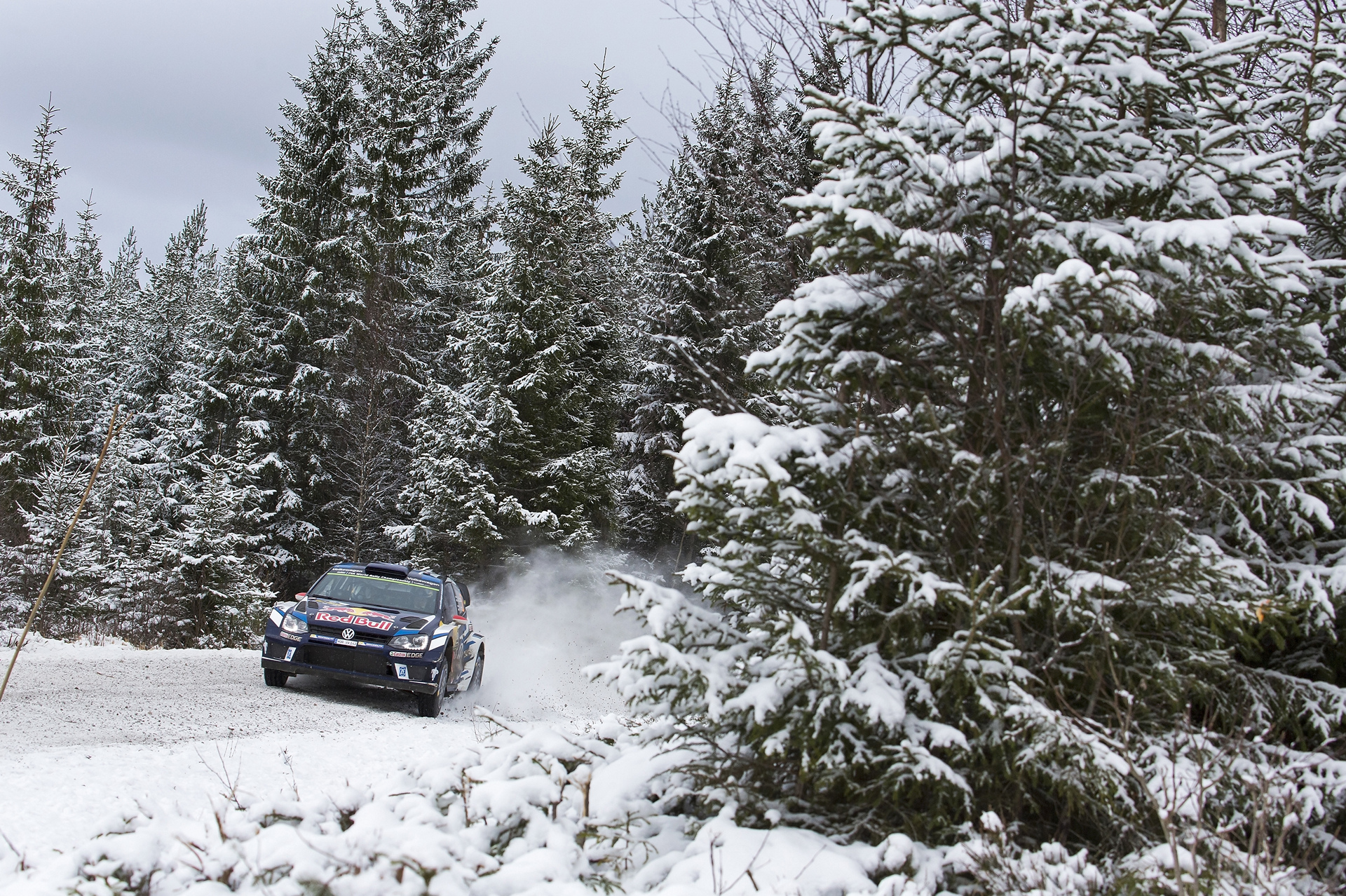 Jari-Matti Latvala/Miikka Anttila suffered a number of set-backs. They were hampered by a broken drive shaft as early as the first special stage of the rally, “Torsby”. Handicapped by having to drive solely with rear-wheel drive, they battled their way through the Friday before eventually having to call time on the final stage of the opening day with a broken suspension. Day two began with a puncture. 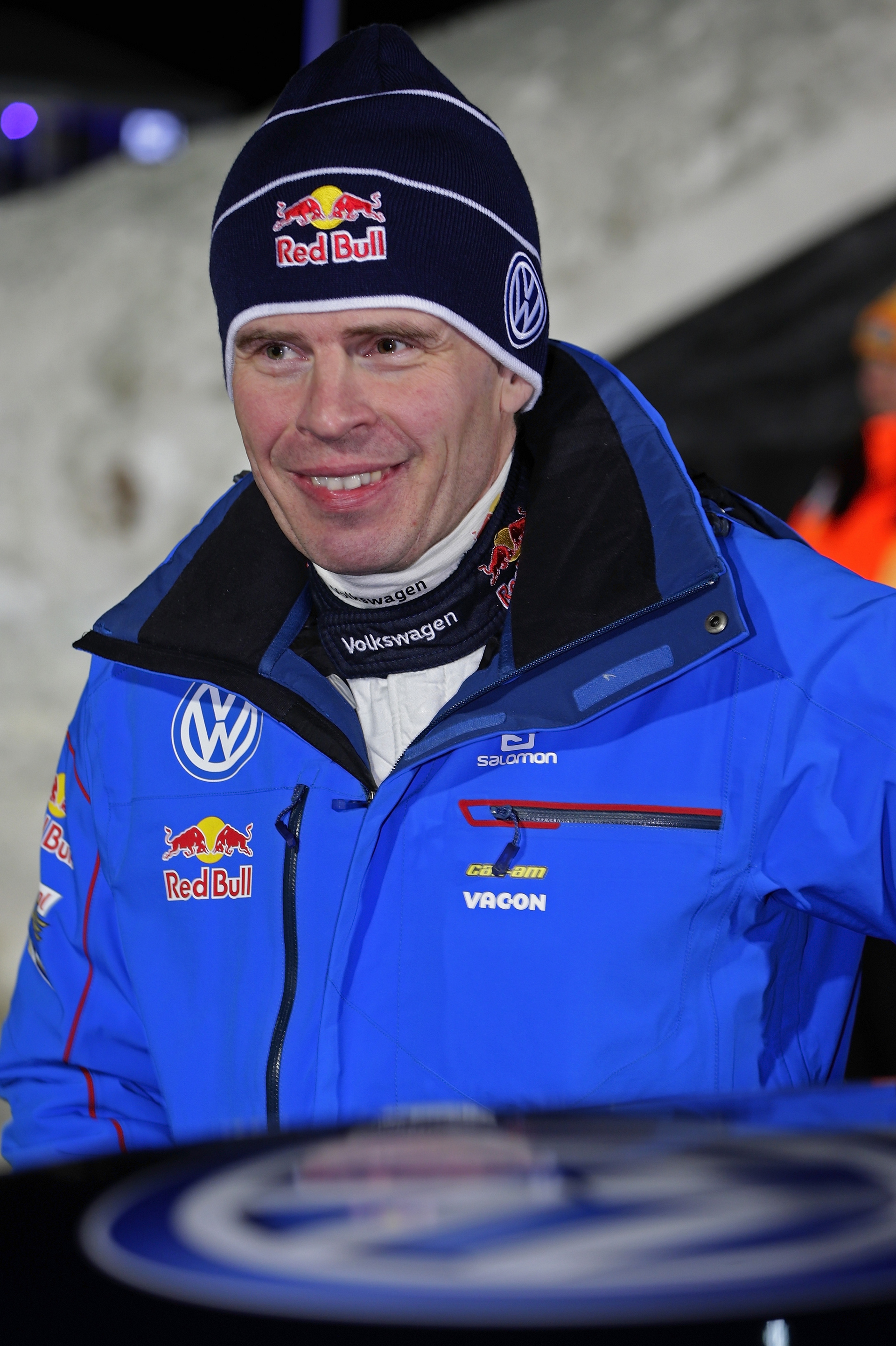 Only then were Latvala/Anttila able to show the potential that had produced three victories at the Rally Sweden in the past. They won three of the four special stages on Saturday, clocking the second fastest time on the remaining stage.

Three plus two: Power Stage points for Ogier/Ingrassia and Mikkelsen/Jæger 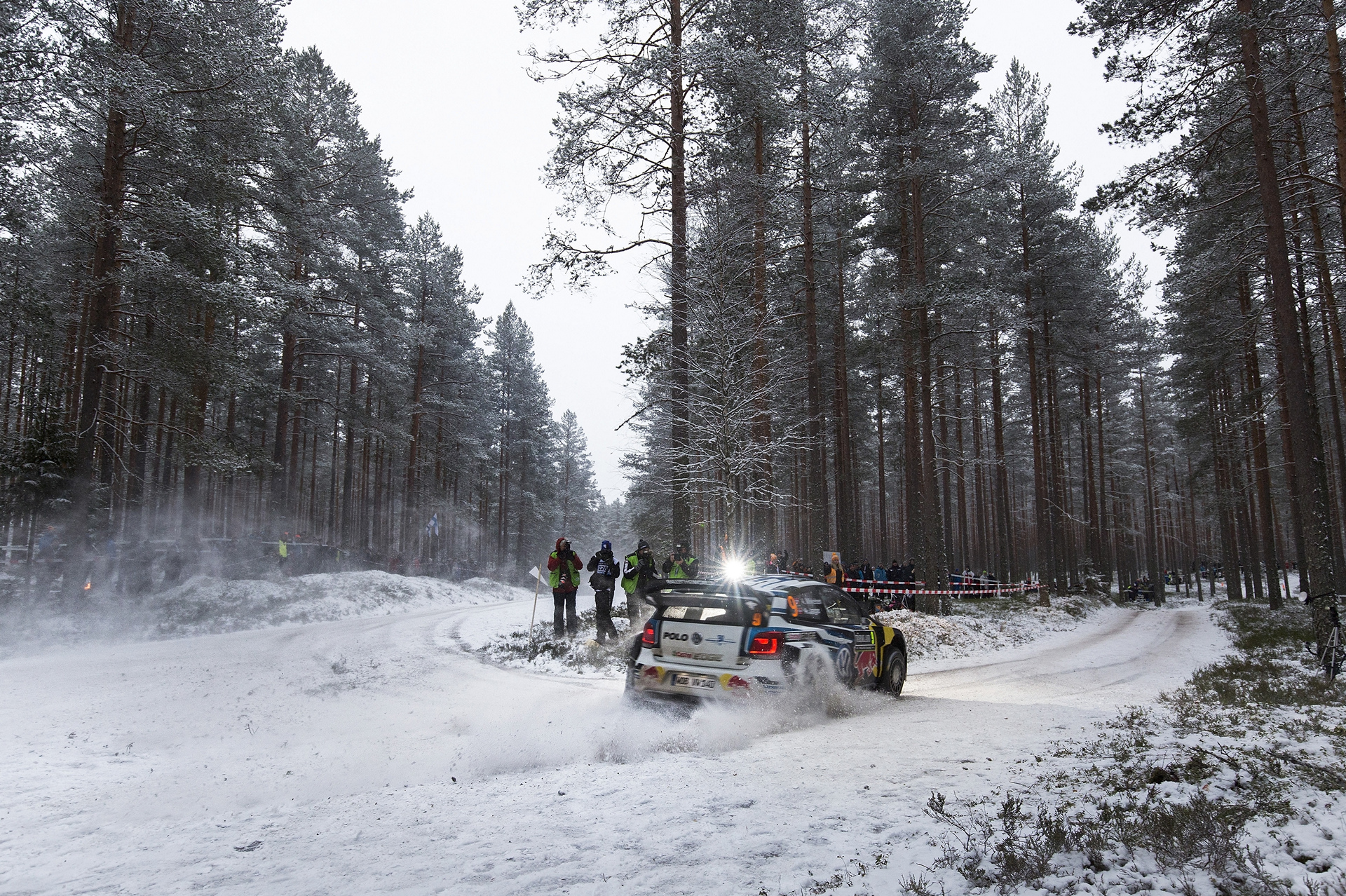 Sébastien Ogier/Julien Ingrassia and Andreas Mikkelsen/Anders Jæger not only added another chapter to Volkswagen’s success story in the World Rally Championship, but also continued the manufacturer’s remarkable record on the Power Stage, on which bonus points are up for grabs for the three fastest duos. 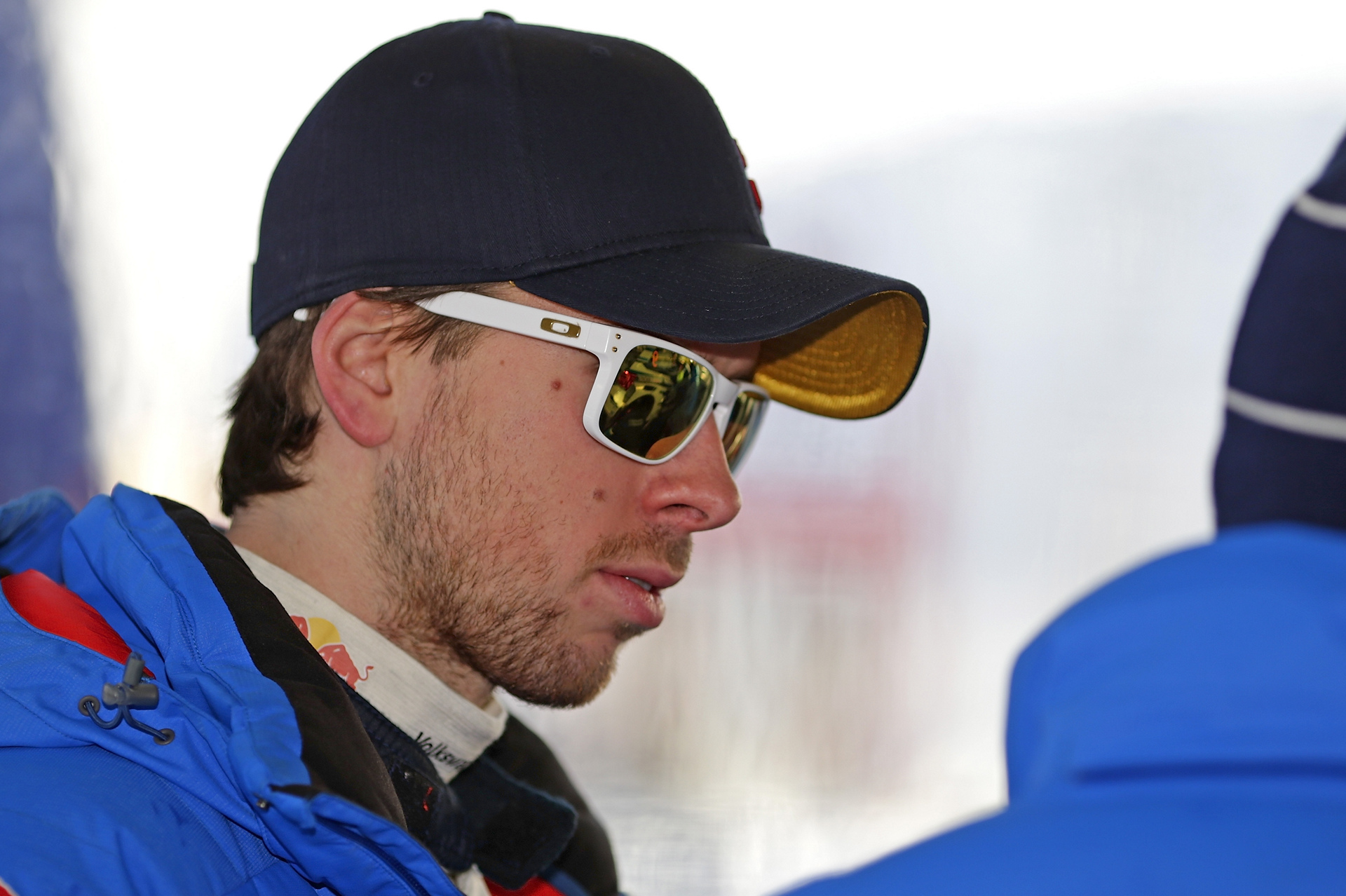 The fastest time on the closing stage of the rally went to Ogier/Ingrassia for the 27th time in their career, and to Volkswagen for the 33rd time in 40 rallies. Mikkelsen/Jæger finished second to round off the success.

Three full years at the top of the World Rally Championship 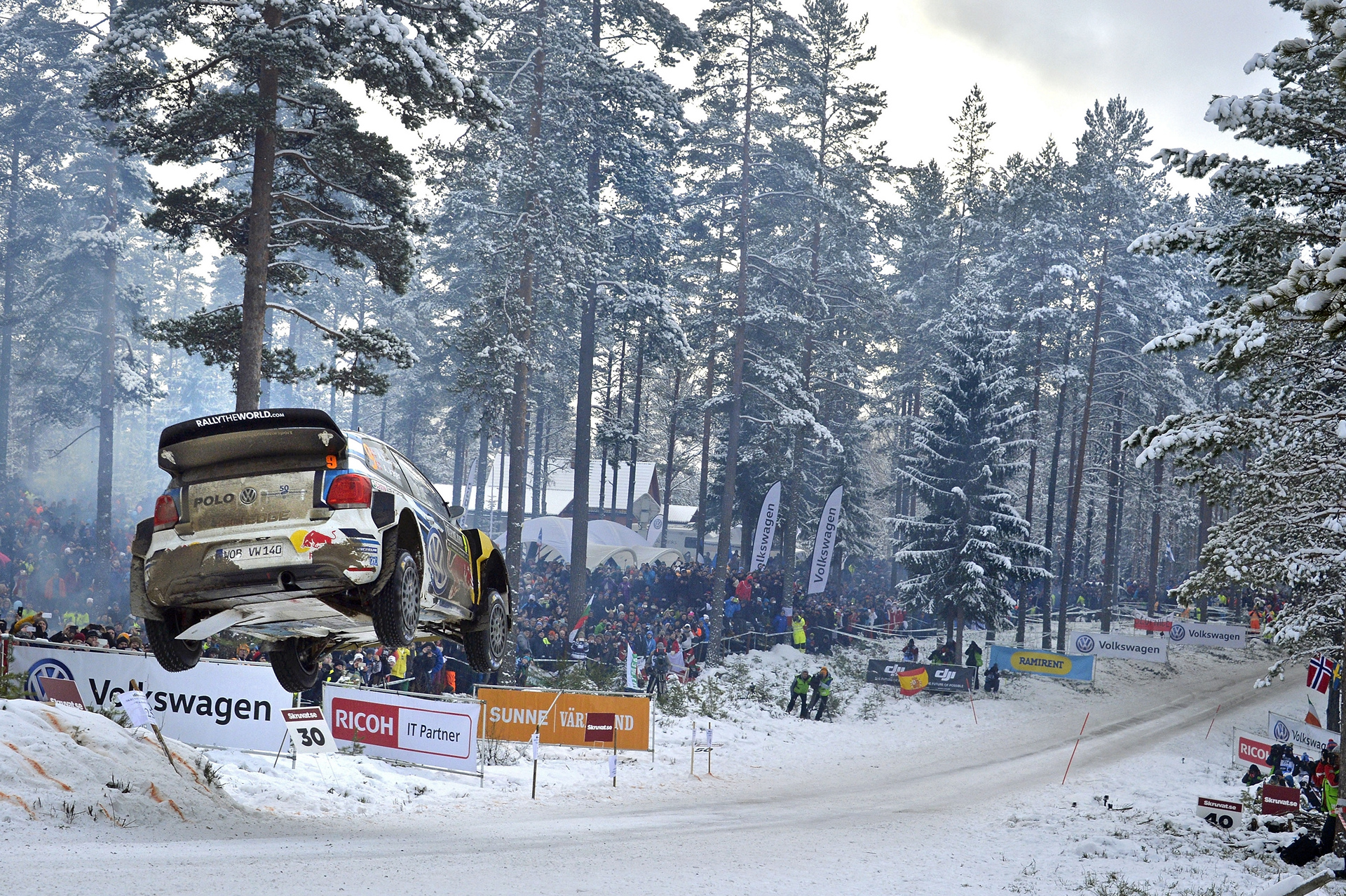 On top of the Driver and Co-Driver Championship continuously since 10 February 2013: the Volkswagen drivers. Back then, Sébastien Ogier/Julien Ingrassia moved to the top of the world championship courtesy of the Polo R WRC’s first victory in its rookie year. Since then, they have only surrendered top spot once – to team-mates Jari-Matti Latvala/Miikka Anttila. Victory at the 2016 Rally Sweden saw the reigning champions pull further clear of their team-mates Andreas Mikkelsen/Anders Jæger, who are currently second in the World Championship. Their lead after two rallies is now 23 points. Victory is rewarded with 25 points, with a maximum three more points available for winning the Power Stage. Volkswagen’s lead over Hyundai in the Manufacturers World Championship is now five points. 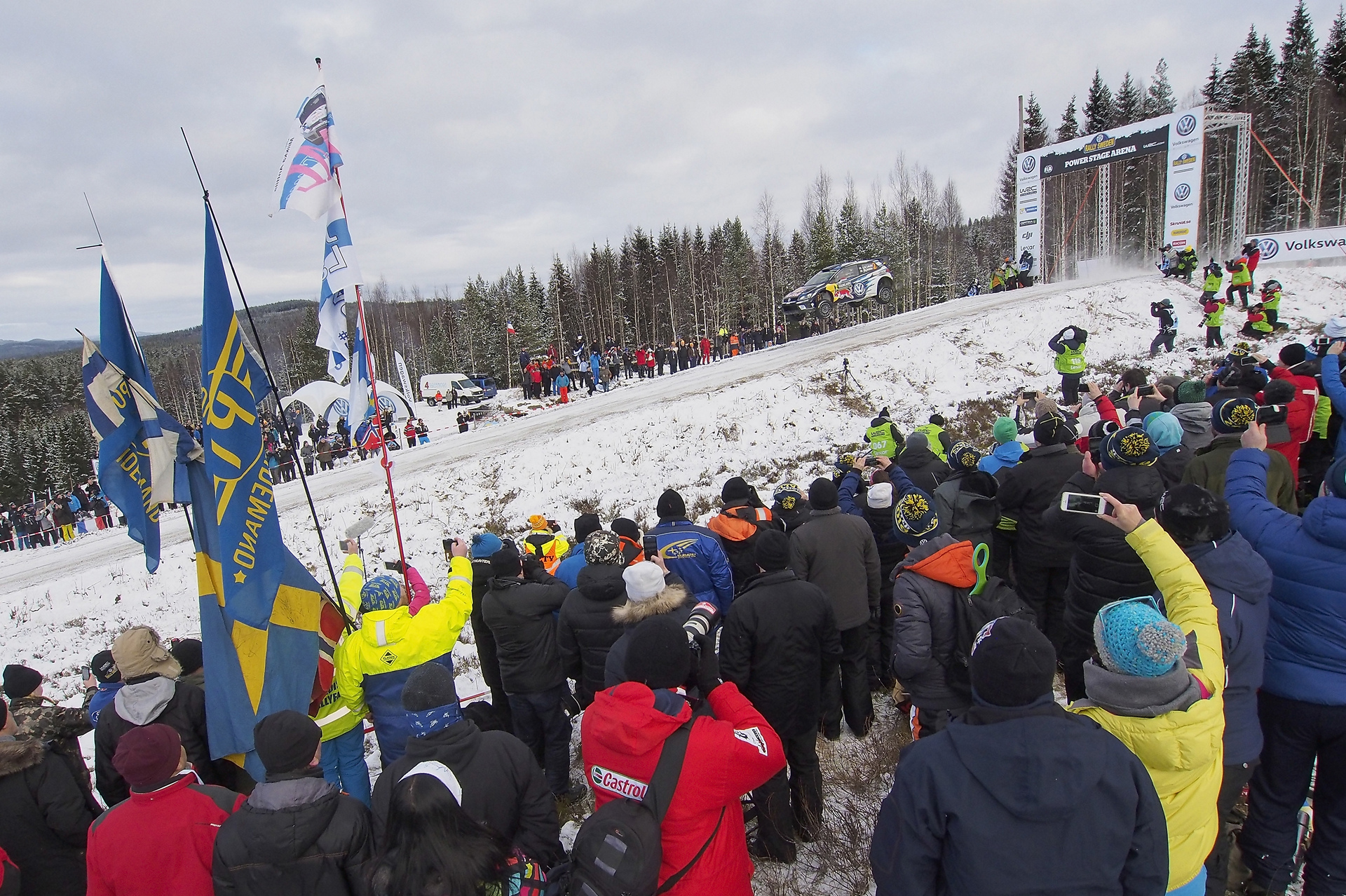 Following the latest triumph at the Rally Sweden, Volkswagen can look back on another impressive winning run. Eleven triumphs in a row marks the second longest series of victories in the history of the World Rally Championship – the longest run, of twelve wins, also belongs to Volkswagen. Ogier, Latvala, Mikkelsen and the Polo R WRC are undefeated since the 2015 Rally Portugal. As such, Volkswagen has the opportunity to equal its own record at the coming Rally Mexico.

Quotes after day three of the Rally Sweden 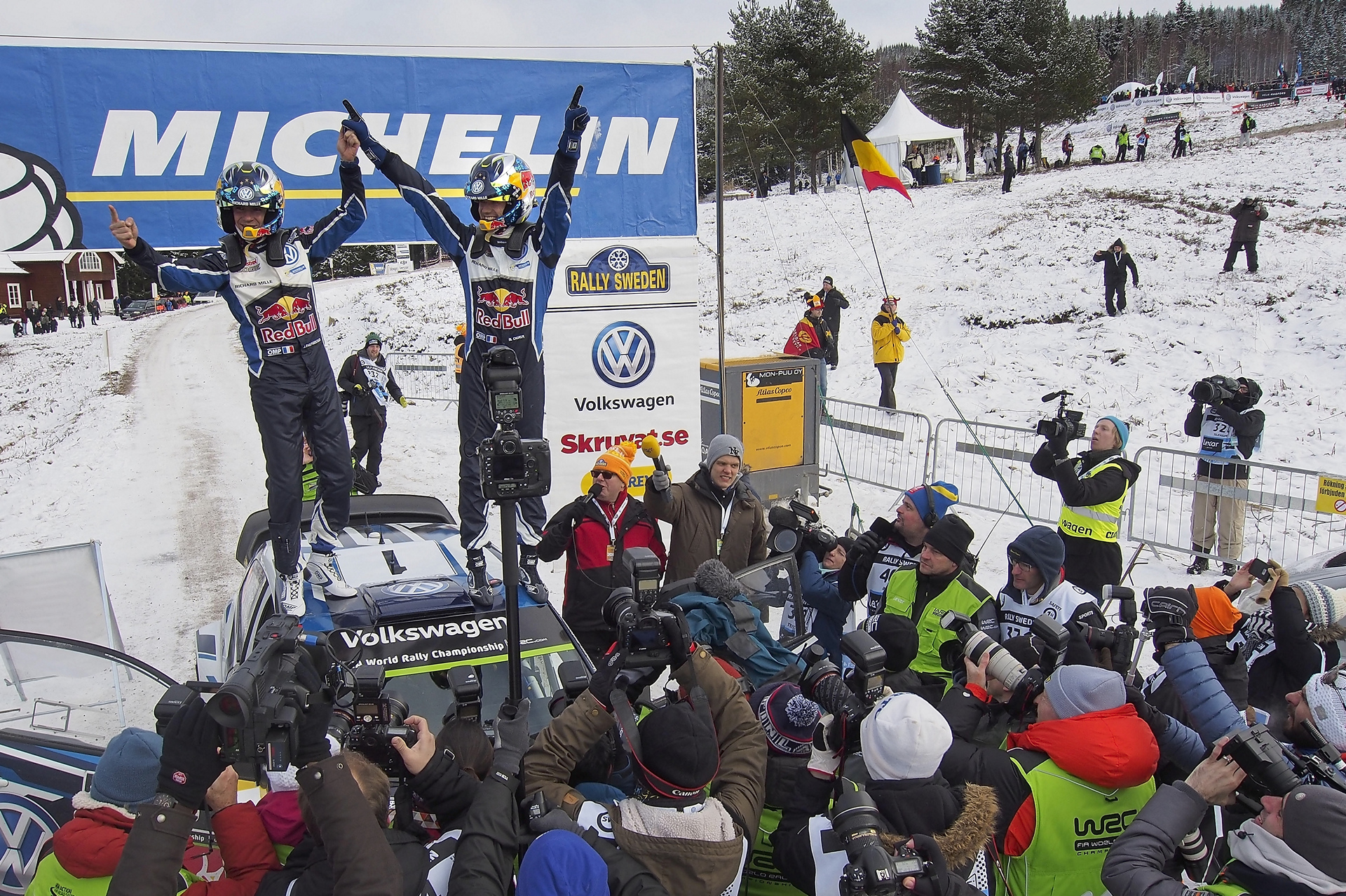 “Winning in Sweden again is an incredible feeling. I just love this rally. The conditions were far from ideal at the start of the week after the thawing and all the rain, which makes it all the more pleasing that we eventually had a really good, wintery Rally Sweden. Yesterday, we probably had to take the greatest risk of our career in order to win. It paid off, and I am just really happy.”

“Naturally, my second home rally, the Rally Sweden, didn’t go at all according to plan. It is always a bitter pill to swallow when a competition is over so early from a sporting perspective. However, it is also important to reflect on the positive aspects of the weekend. The car felt fantastic, we were totally competitive and we proved that with best times on some stages. Unfortunately, I had to take to the track first on the closing power stage, which meant that I wasn’t really in with a chance of picking up any points. We have a good starting position for the next event in Mexico, and we have to make use of it. Hopefully the conditions will be on our side, and I wouldn’t be averse to a little more luck than in the first two events of the season.“

“Naturally, fourth place is not what we were aiming for at the Rally Sweden. We definitely wanted to be fighting for the win. However, to achieve this, we had to drive on full attack right from the start – and ultimately made too many mistakes. Naturally, we will learn from this for the future. I gave it my all once again on the power stage today and picked up two bonus points. On balance we made the best of the situation.”

“To win the Rally Sweden four times is a fantastic effort from the entire team, but particularly from Sébastien Ogier and Julien Ingrassia. With the very special conditions created by the weather, winning this rally took a will to attack and a flawless display in equal measures. I take my hat off to them. The fact that going at full throttle 100 percent doesn’t necessarily guarantee success was demonstrated by Andreas Mikkelsen and Anders Jæger. Like their team-mates they gave it their all, but minor errors made the difference between victory and fourth place. Jari-Matti Latvala and Miikka Anttila missed out on fighting for the win early on, but despite the setbacks at the start, they delivered a good performance. We are definitely pleased with the performances of our drivers and the entire team.”

And then there was …

… a true rally sprint. The warm weather in Sweden and the persistent thawing ahead of the second WRC event of the year forced the organisers to cancel nine of the 21 special stages. This reduced the distance of the classified kilometres to 226.48 km – making the 2016 Rally Sweden the shortest WRC rally of all time. Before this, the 2015 Rally France at 245.35, the 2007 Rally Argentina at 248.90 and the 2011 Rally Jordan at 259.56 timed kilometres were the shortest competitions in WRC history.