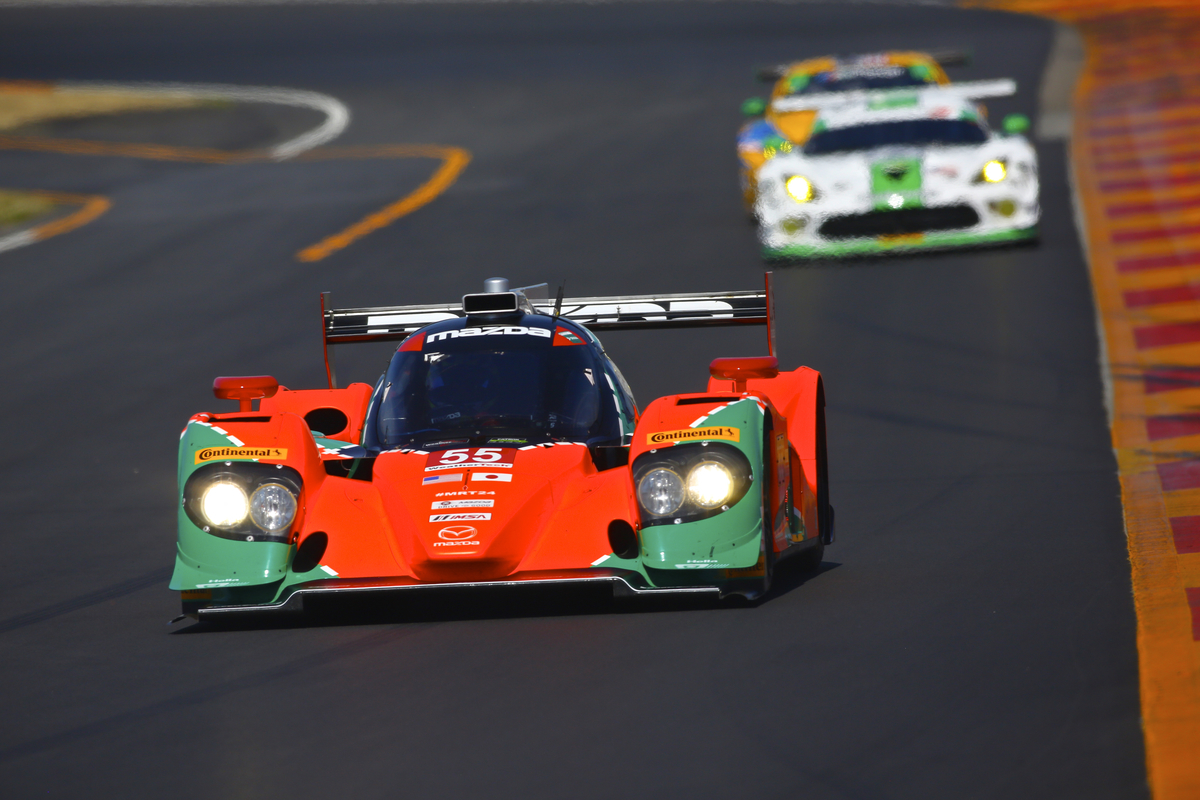 The No. 70 Mazda Prototype finished fifth in today’s Sahlen’s Six Hours of the Glen for the IMSA WeatherTech SportsCar Championship. The second Mazda entry, the No. 55 car, led the race and ran among the leaders for five-and-a-half hours until engine issues ended a bid for victory. Both cars carried special liveries to honor the 25th anniversary of Mazda’s victory at the 1991 24 Hours of Le Mans.

The race began on a positive note, as Tristan Nunez fought for the lead in the No. 55 car until a spin in Turn 1. Driving with renewed anger, Nunez fought hard from 11th place through the field to take the lead before handing off to teammate Spencer Pigot. Pigot, the IndyCar racer in only his third career sports car race, raced off to a 7.5-second lead until a caution flag bunched the field. In his final segment, Pigot ran comfortably behind the race leader as the engine began experiencing a sporadic misfire. When Jonathan Bomarito climbed in to finish the race, the misfire became worse, but Bomarito was still able to remain in third-place, stalking the leaders until the engine lost power for good with 30 minutes remaining. The 55 car led three times for 15 laps but finished eighth in the nine-car Prototype field.

The No. 70 car also began strong with driver Tom Long, moving as high as fourth place early on. Ben Devlin manned the next stint, but a faulty pit stop caused a fuel spill and resulted in a drive-through penalty. The team stayed on the lead lap until an unscheduled stop to change a left rear tire knocked them a lap behind. Despite running the final two hours amidst the lead pack, they finished fifth, one lap down. The 70 car led two laps.

You had several long stints in the car on a really fast track. How was that for you physically? “Certainly our Mazda Motorsports team overcame some difficulties today to bring home a top-five. The opportunity to drive the car a couple of stints in a row, your physical training and everything that you’ve worked hard at off the track, it pays off! That’s what is a lot of fun about being up to the task for the team. From a mental standpoint, it takes a lot of focus. Our team is very good about giving us all of the information so we’re able to stay focused and understand what the plan is, where we are in the race and all the details. Unfortunately, we ended up a lap down, but you can’t focus on that.”

You’ve been racing Mazdas for years, and join the team four times a year at the longest endurance races. How hard was it to fight all of the traffic today? “I don’t know if it was any tougher or any meaner than any other race today. We are at the pinnacle of sports cars here, there’s close to 40 cars on the grid and it’s gonna be hard. They have to make it tough for you. If they’re gonna let you past then they’re not going to have jobs. I know I certainly wasn’t going to let anybody by! Everyone was fair and made it hard to pass because that’s what we’re paid to do: stay in front of all the others. It’s always a pleasure racing here in the WeatherTech championship and we always put a good Mazda out there. It’s a happiness for all of us to be so competitive and it’s pleasure for me to come in for these four races throughout the year.”

You finished the race strong in the final hours.

“At the end, the Mazda Prototype was all about getting our lap back, but the opportunity never developed. The last stint was just about managing pace to make sure we got the solid finish. I’m happy that the next race is only a week away, so we can make up for what just happened. The cool part about today that we’re going to take with us to Canada is that the 55 led a big portion of the race and we were right there fighting as well – racing with the leaders when we were one lap down. We take that momentum and that speed and apply it to CTMP. I’m glad it’s a week away and not a month away.”

You were in the car when it slowed to a stop, and yet you gave the crew a pep talk over the team radio. “It’s heartbreaking. As hard as it is on the drivers – we put our heart and soul in it – but so has the crew. To be so strong, leading a lot of the race and being in the top-three pretty much all day until it went away from us in the end, I was trying to give the guys a bit of a pep talk. We go to Canada from here, so I was trying to give them motivation as they prep the cars this week. We’re going to come out swinging to get the win that they deserve.”

Your car carried the iconic green and orange livery of the Mazda winner at Le Mans. How was that for you? “That’s huge. It’s emotional really, as in the entire Mazda history in motorsports, that’s the highlight. The fan reaction was absolutely incredible this weekend. It was really special to be in the fire suits like they wore – and everybody wants us to keep the look!”

You did nearly two-and-a-half hours in the car and was the fastest on the track for almost all of it. “It was complete chaos from the get-go. Everyone saw we had the car with the pace to win it. The engineers and the crew put together a fantastic car. I had contact with the 10 car, but it was a racing incident. Just racing hard. I got turned around and there was rage inside me and I was able to push harder than ever. I was happy to race through the field and hand it to Spencer in the lead. Everyone did their job – just misfortune at the end. We’re going to another fast track next weekend, which should be great for us. Very high speed. It’s going to be awesome and we can’t wait.”

Pigot, the 2015 Indy Lights champion on the Mazda Road to Indy, and now an IndyCar driver with Ed Carpenter Racing, had never seen the Watkins Glen until practice on Friday. “I was able to learn the track pretty quickly due to the team and my teammates. They did a great job setting up the car and it made my job that much easier. The race was a lot of fun because there’s always something going on. In this type of racing, you’re always racing or passing someone, battling all the time. Throughout my stint, I had a little bit of everything so I went from leading by quite a ways and then at another point having to battle my way back through the pack. I really just enjoyed the drive.”