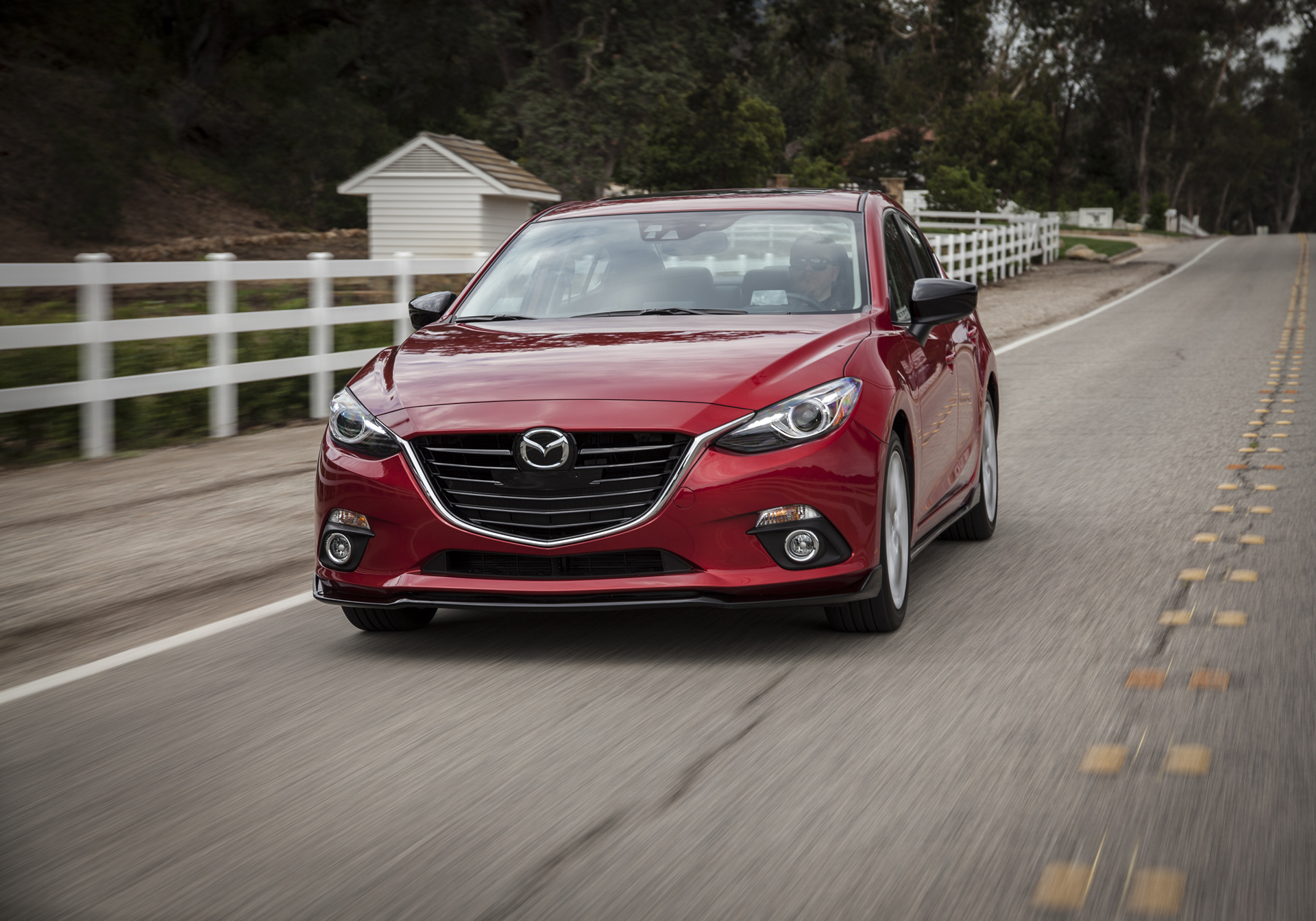 Forget the word “compromise” ever existed. Mazda3 is a vehicle that exceeds expectations, from its impressive fuel economy to its sophisticated ride and handling to features that are rare or exclusive in its class like available adaptive high-intensity headlights, Mazda Radar Cruise control and even Active Driving Display, a head-up unit that displays important information helping the driver keep his or her eyes on the road. 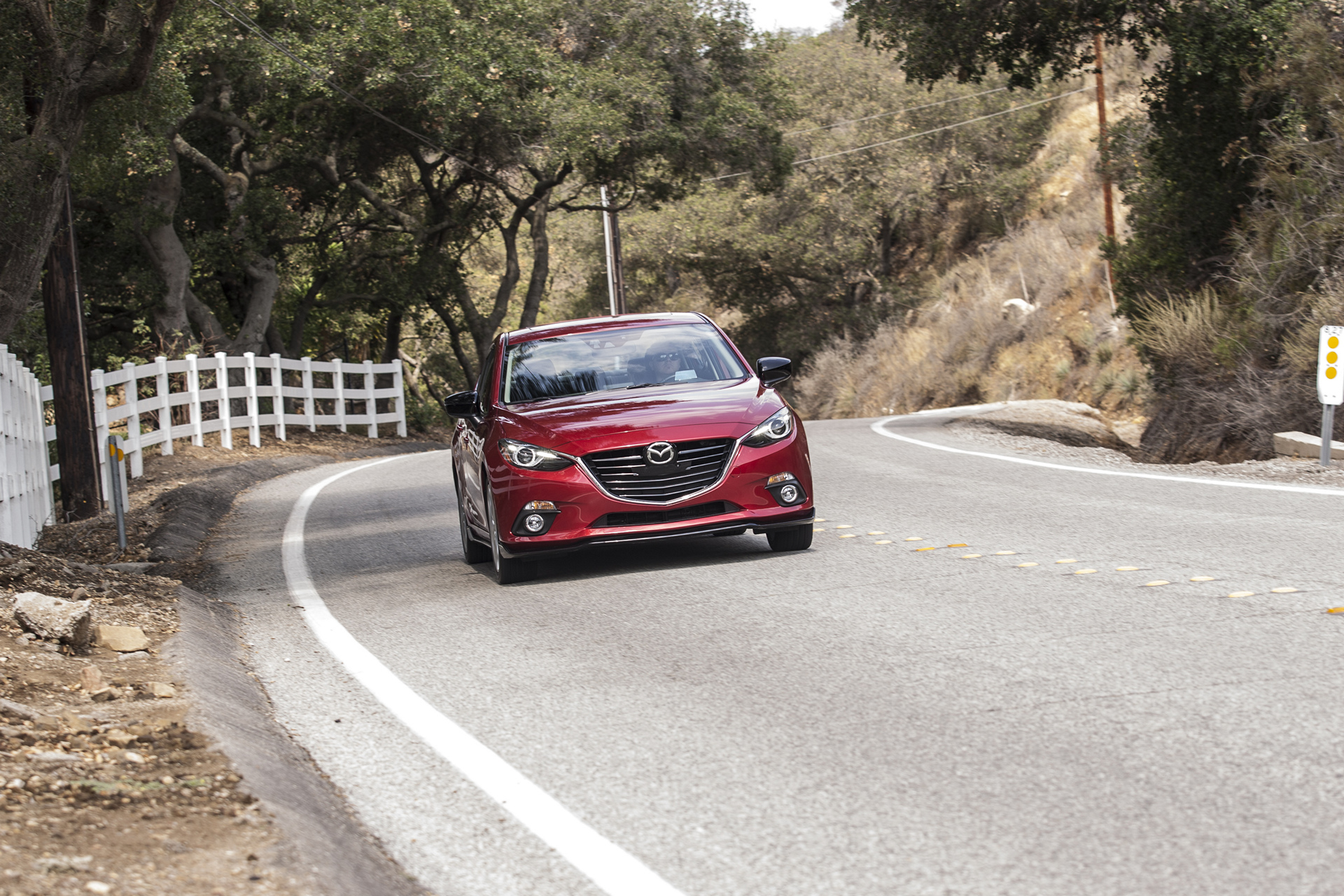 The 2016 Mazda3 returns with the formula that has propelled it to win numerous accolades throughout the auto industry. With more than 4.5 million produced since its introduction as a 2004 model, Mazda3 is Mazda’s best-selling nameplate in the world. 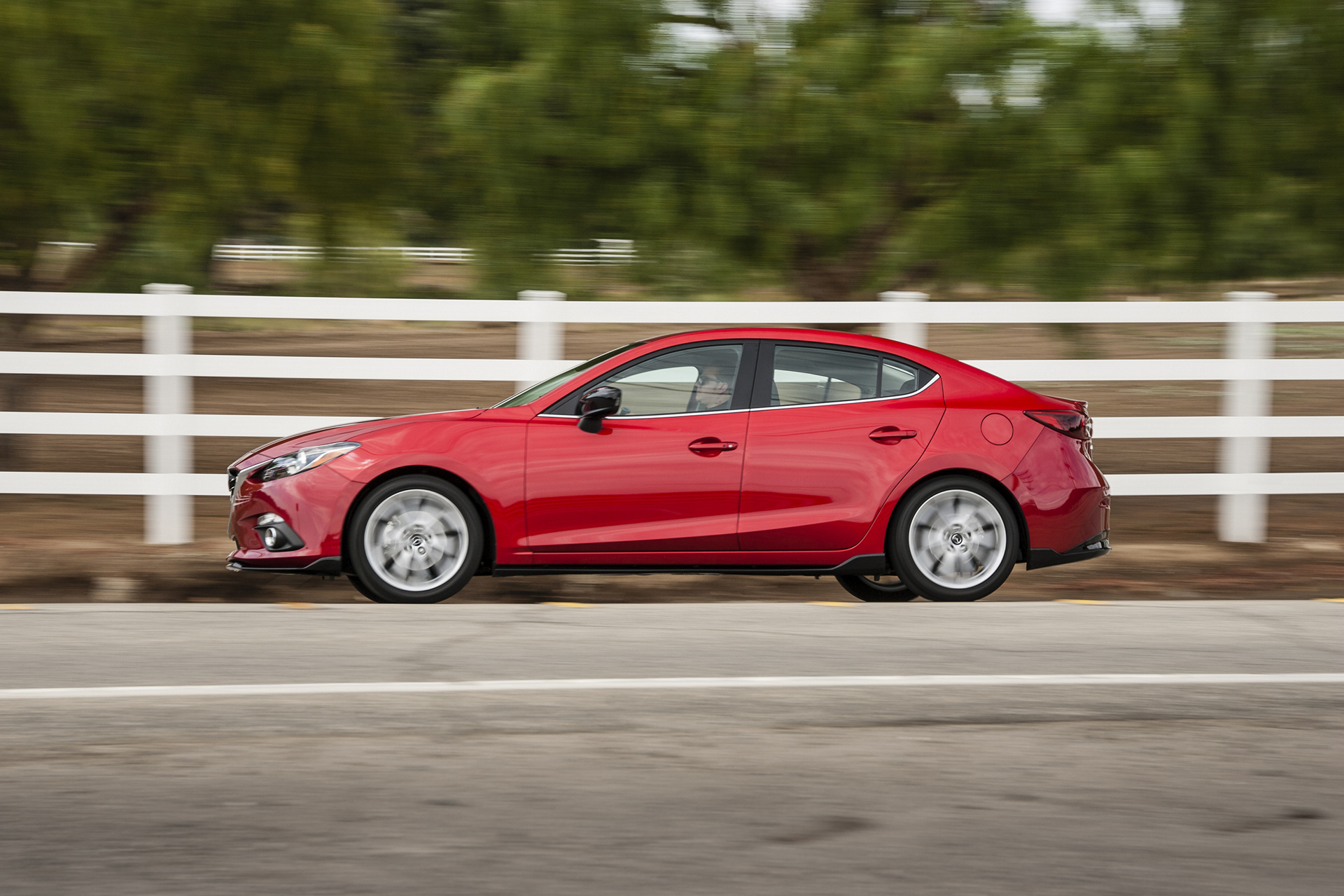 Mazda3 comes off as nothing less than striking, with a long hood, swept windscreen and interior greenhouse and wheels pushed as far to each corner as possible. Its bodywork stems from a pronounced, upright grill and slinks over its fenders and to the back of the car. KODO—Soul of Motion, the form language of Mazda’s current-generation of vehicles, defines Mazda3’s doubletake-worthy looks.

But much as Mazda3’s exterior design sets it apart from its competition, so does its interior, which is finished in high-quality materials and is as stylish as it is practical. Upfront, the driver and passenger are greeted by a seven-inch MAZDA CONNECTTM full-color touchscreen display and commander control knob for infotainment and available navigation control functions. 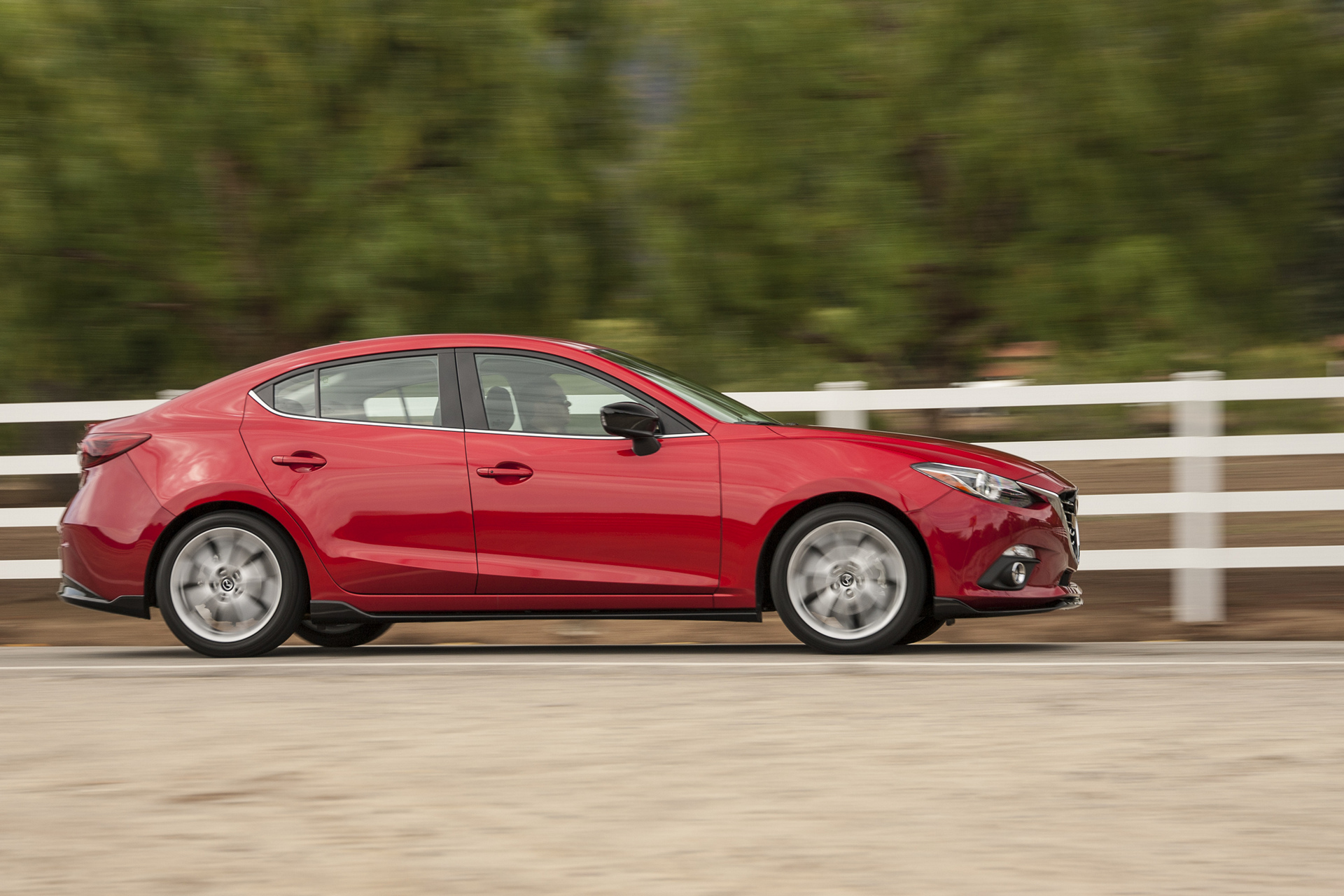 It’s designed to allow users to more safely and purposefully use technology while traversing urban sprawl, a sparsely traveled back road, their commute or just a quick trip across town. But it’s just the beginning of Mazda’s long list of features and amenities.

Whether optioned in four-door sedan body style or five-door hatchback, Mazda3’s appeal is expanded with practicality and an athletic nature that complement one another and are truly a unique combination of assets in its class. 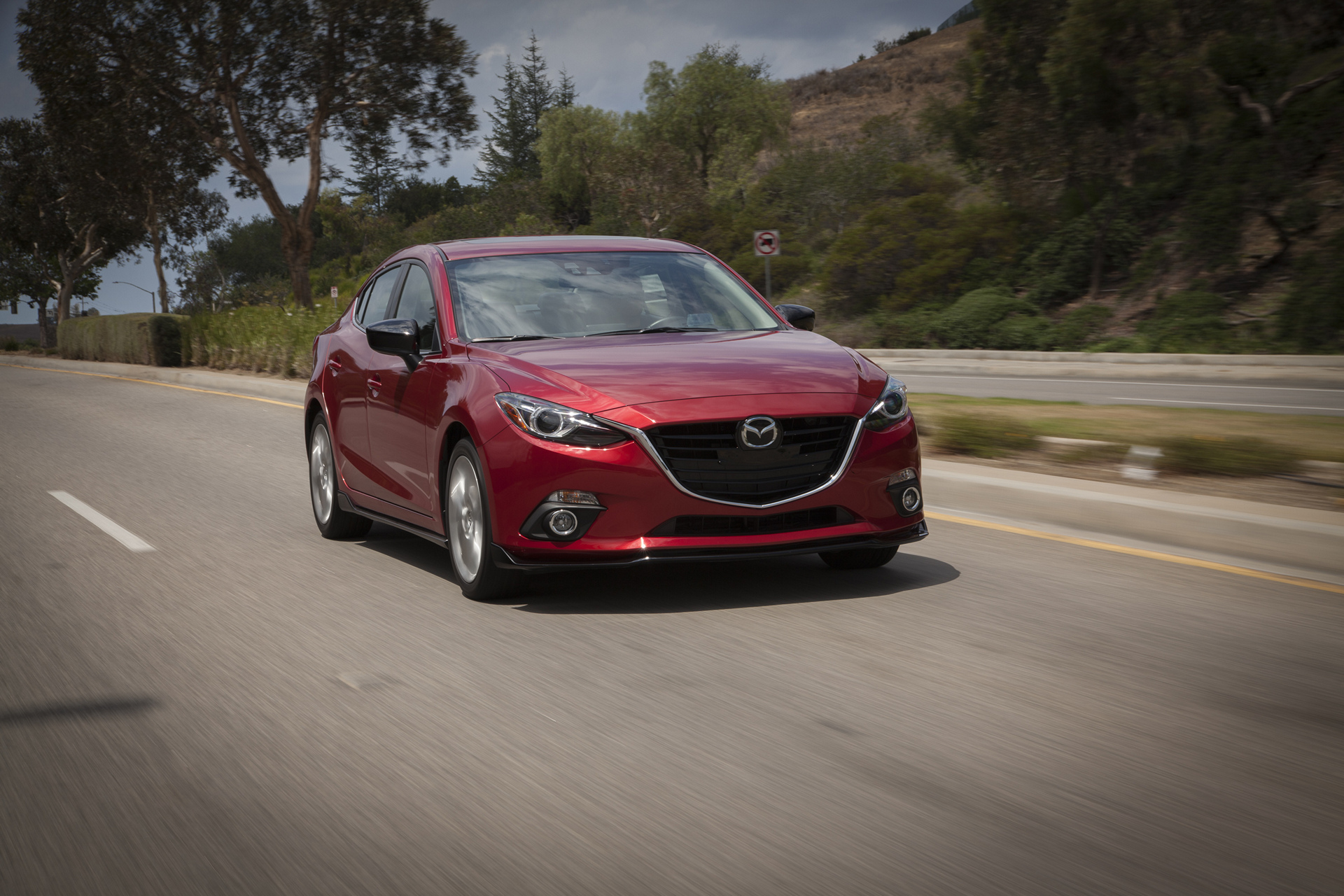 The 2016 Mazda3 comes with a host of updates. Mazda3i SV has been discontinued, making Mazda3i Sport the entry-level model. Other changes include: 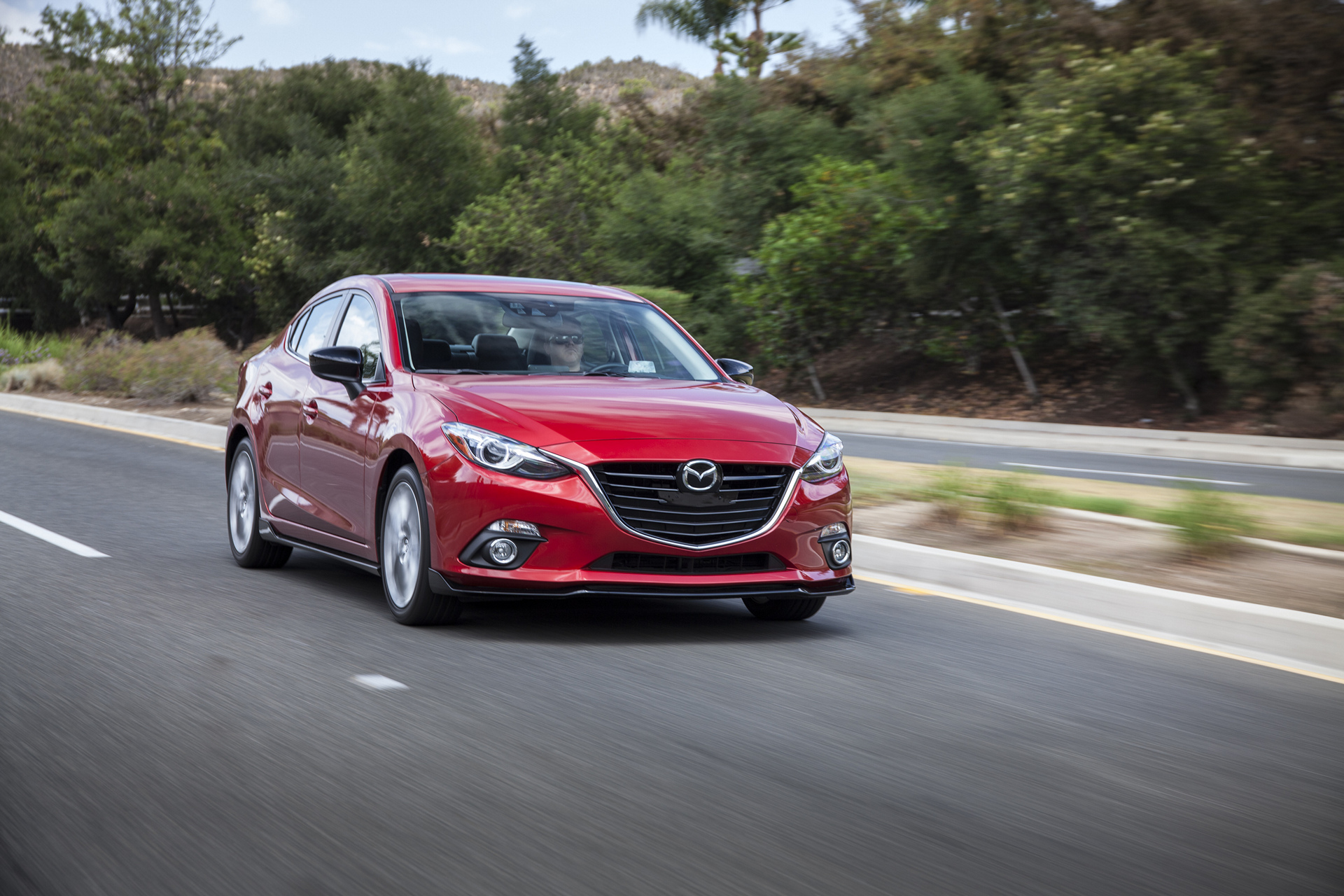 The previous-generation Mazda3 introduced SKYACTIV Technology to the U.S. in 2012 with a 2.0-liter engine that propelled Mazda3 to a nearly 20-percent EPA-estimated fuel economy gain compared to its non-SKYACTIV brethren, thanks to lightweight engineering, direct fuel injection and a lean-burning Atkinson-cycle combustion at low rpm in the engine rev range.

It was a foreshadowing of the dramatic leaps and bounds that would be taken with the thirdgeneration Mazda3, which adopts all of Mazda’s SKYACTIV Technologies, including its chassis, engine, transmission and body to create a lighter, sportier car.

The base engine for Mazda3 is a SKYACTIV-G 2.0-liter four-cylinder that produces 155 horsepower at 6,000 rpm and 150 lb-ft of torque at 4,000 rpm. When coupled with its available SKYACTIVDRIVE six-speed automatic, Mazda3 can achieve an EPA-estimated fuel economy up to 30 mpg city/41 mpg highway/34 mpg combined.

Optioning up to the 2.5-liter engine adds some more punch to the mix without greatly impacting fuel-efficiency. With 185 horsepower at 5,700 rpm and 185 lb-ft of torque at a low 3,250 rpm, sedans equipped with SKYACTIV-MT have an EPA estimated fuel economy of 25 mpg city/37 mpg highway/29 mpg combined, while automatic-equipped sedans come in at 28 mpg city/39 mpg highway/32 mpg combined.

With the Technology Package on Grand Touring models, Mazda3 comes equipped with i-ELOOP, a capacitor that efficiently uses electricity captured during coasting and braking to power accessories. The net effect is that it takes the burden of powering accessories like lights and the stereo system off the belt-driven alternator attached to the engine, allowing Mazda3 to achieve even greater fuel economy. In 2.5-liter models equipped with i-ELOOP, Mazda3 sedan earns an EPAestimated fuel economy rating of 29 mpg city/40 mpg highway/33 mpg combined.

Mazda3’s light weight, slick coefficient of drag (Cd) as low as .255 and responsive powertrain options are a boon to its efficiency, but they also help it carry an uncommon athleticism for its class that demonstrates pragmatism and performance don’t have to be mutually exclusive. 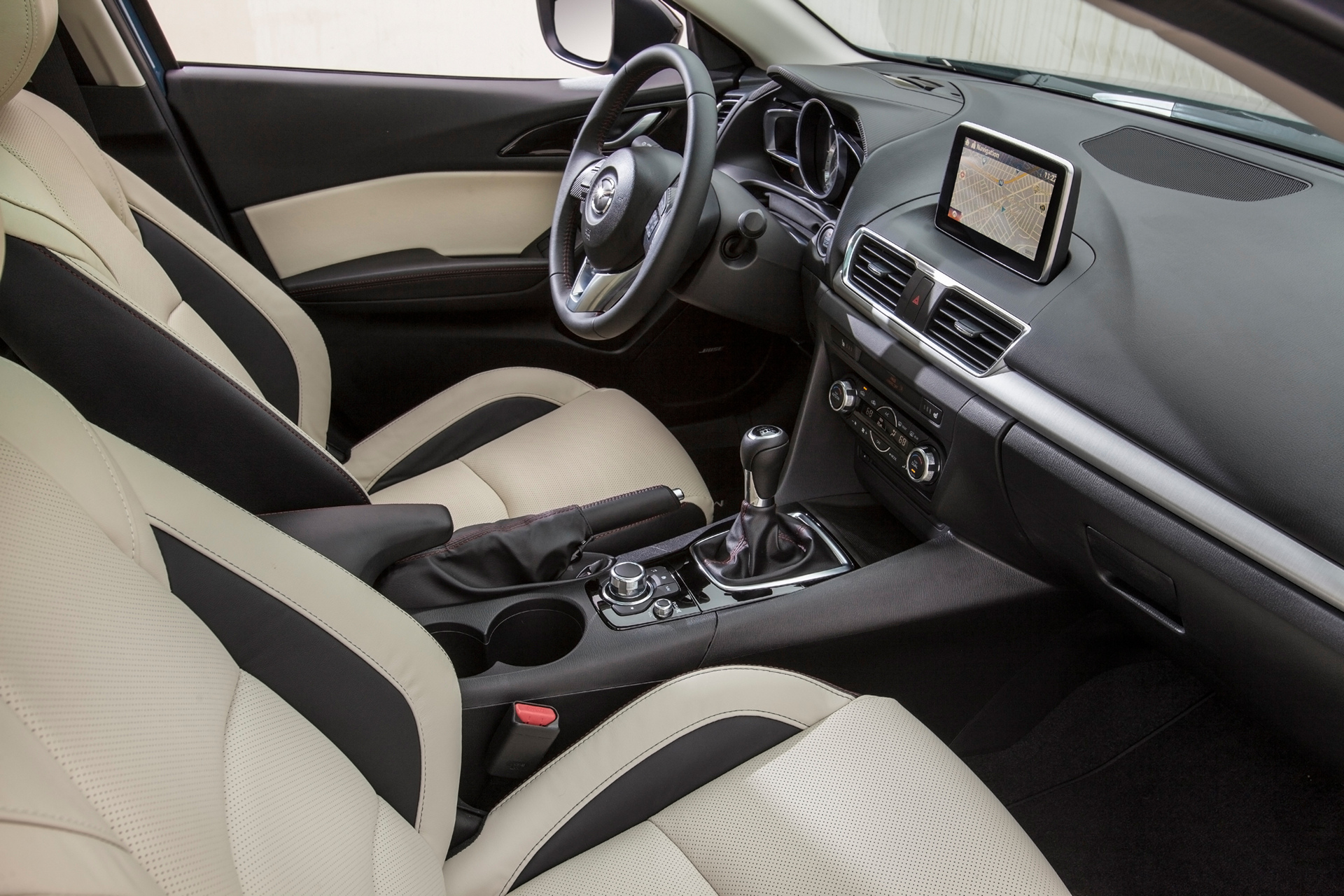 Mazda3 comes packed with technology rarely seen in a vehicle of its class, including its available seven-inch full-color touchscreen MAZDA CONNECTTM display with commander control knob and voice command functions. Within its functionality are Bluetooth wireless phone pairing and audio streaming, available navigation and built-in integration for Pandora®, Aha by HARMANTM and StitcherTM.

Additional MAZDA CONNECTTM functionality includes SMS text message integration that can read text messages aloud and has selectable preloaded responses. MAZDA CONNECTTM also has the ability to read and respond to verbal map directions, Yelp and other directions aloud in order to help keep the driver’s eyes on the road.

Newly standard for the 2016 Mazda3i Sport is a rearview camera, and newly available in Mazda3i Sport is the Preferred Equipment Package, which brings features from Touring and Grand Touring models into the most accessible Mazda3. Features include heated body-color power mirrors with integrated turn signals, auto on/off headlights and rain-sensing windshield wipers.

A Mazda3 for Every Purse and Purpose 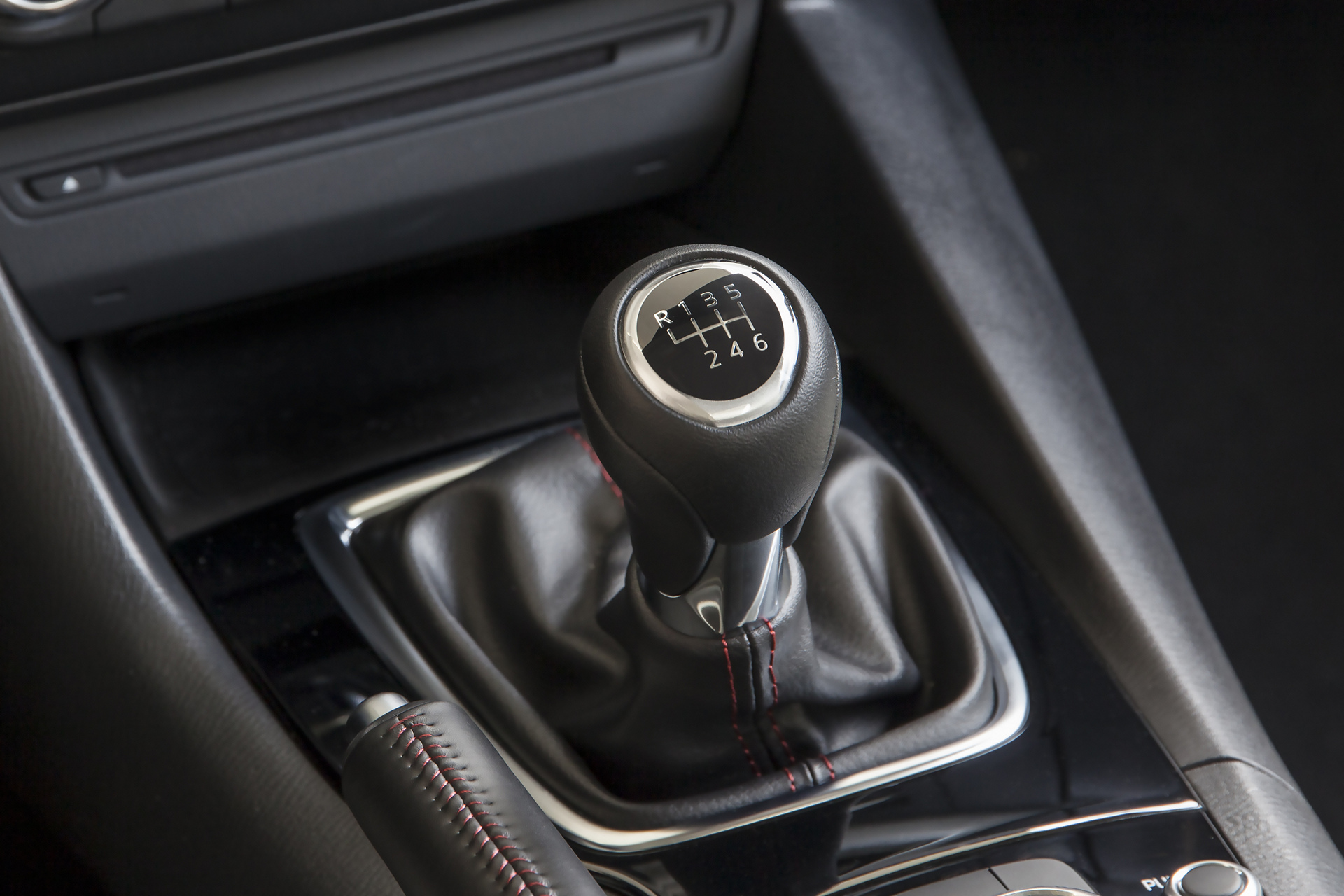 Mazda3 models are denoted by “i” for carrying the SKYACTIV-G 2.0-liter engine or “s” for the 2.5-liter engine. Mazda3 is available in Sport, Touring and Grand Touring trim levels, with each successive trim level gaining equipment. Both Mazda3i and Mazda3s are available in either the four-door sedan or five-door hatchback body style. 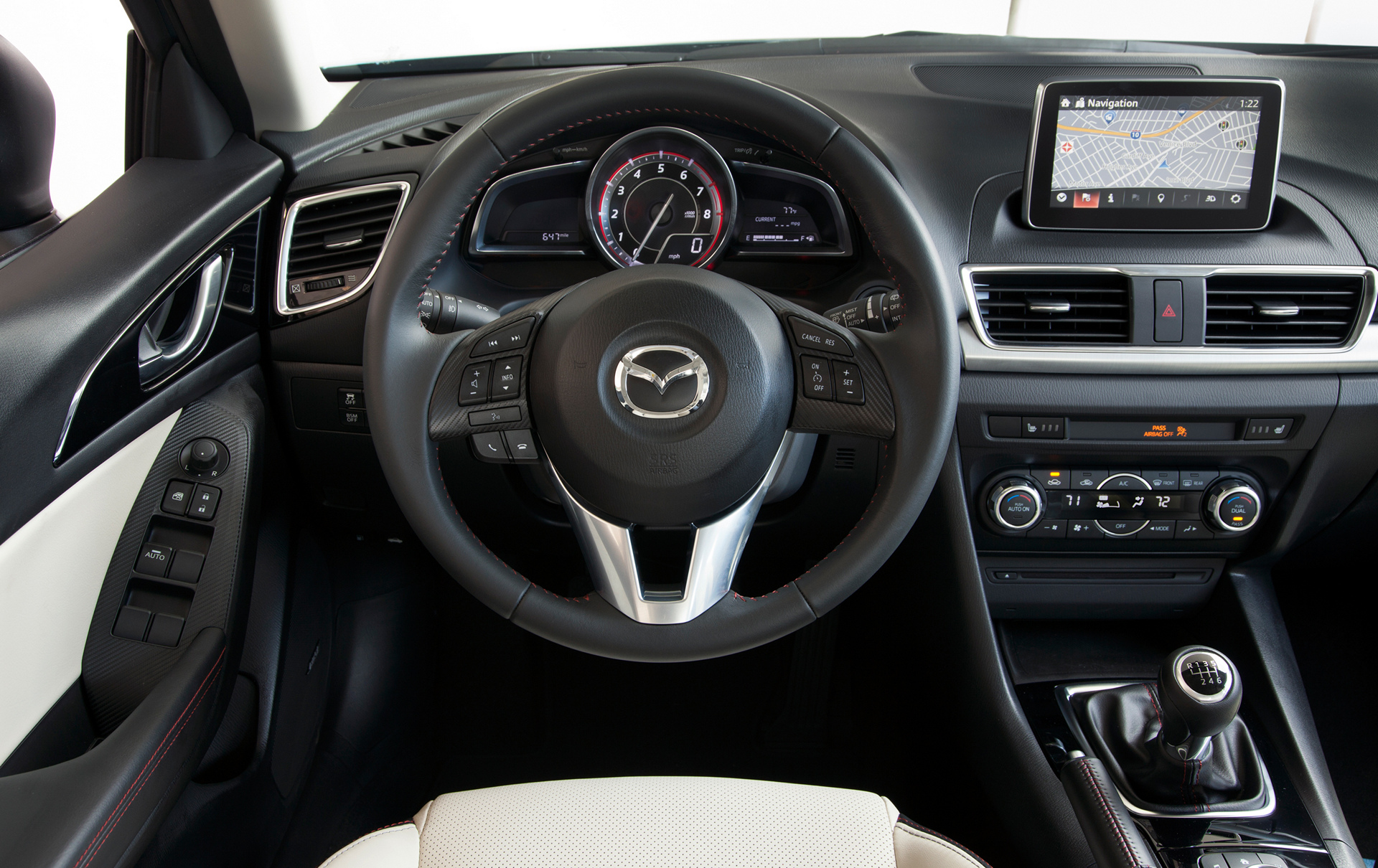 The 2016 Mazda3 features available i-ACTIVSENSE technologies, which encompass the full suite of Mazda’s advanced safety technologies that use milliwave radars and cameras to support the driver in recognizing hazards, helping to avoid collisions and minimizing damage should accidents occur. While these systems will not eliminate accidents, their intent is to minimize them and help reduce the severity of a crash.

The 2016 Mazda3 is an exemplary example of vehicle dynamics, fuel efficiency and leading safety technology and has received a 5-Star Safety Rating from the National Highway Traffic Safety Administration (NHTSA) as well as a 2015 “Top Safety Pick+” designation from the Insurance Institute of Highway Safety (IIHS) for both sedan and hatchback models.

All models come with a standard rearview camera for 2016, and i Touring and above models feature BSM and RCTA. The Adaptive Front-lighting System (AFS) and rain-sensing windshield wipers are standard on the s Grand Touring.

Lastly, all Mazda vehicles come with the Mazda Certified Roadside Assistance Program. Using either the toll-free number or free Mazda Assist app for iOS- and Android-operated mobile devices, owners and their family members can contact roadside assistance 24 hours a day, 365 days a year throughout the United States and Canada. In addition, the New Vehicle Limited Warranty includes a comprehensive threeyear/36,000-mile warranty, which covers every part of the vehicle (except those subject to normal wear), a five-year/60,000-mile powertrain warranty and a five-year/unlimited- mileage corrosion warranty