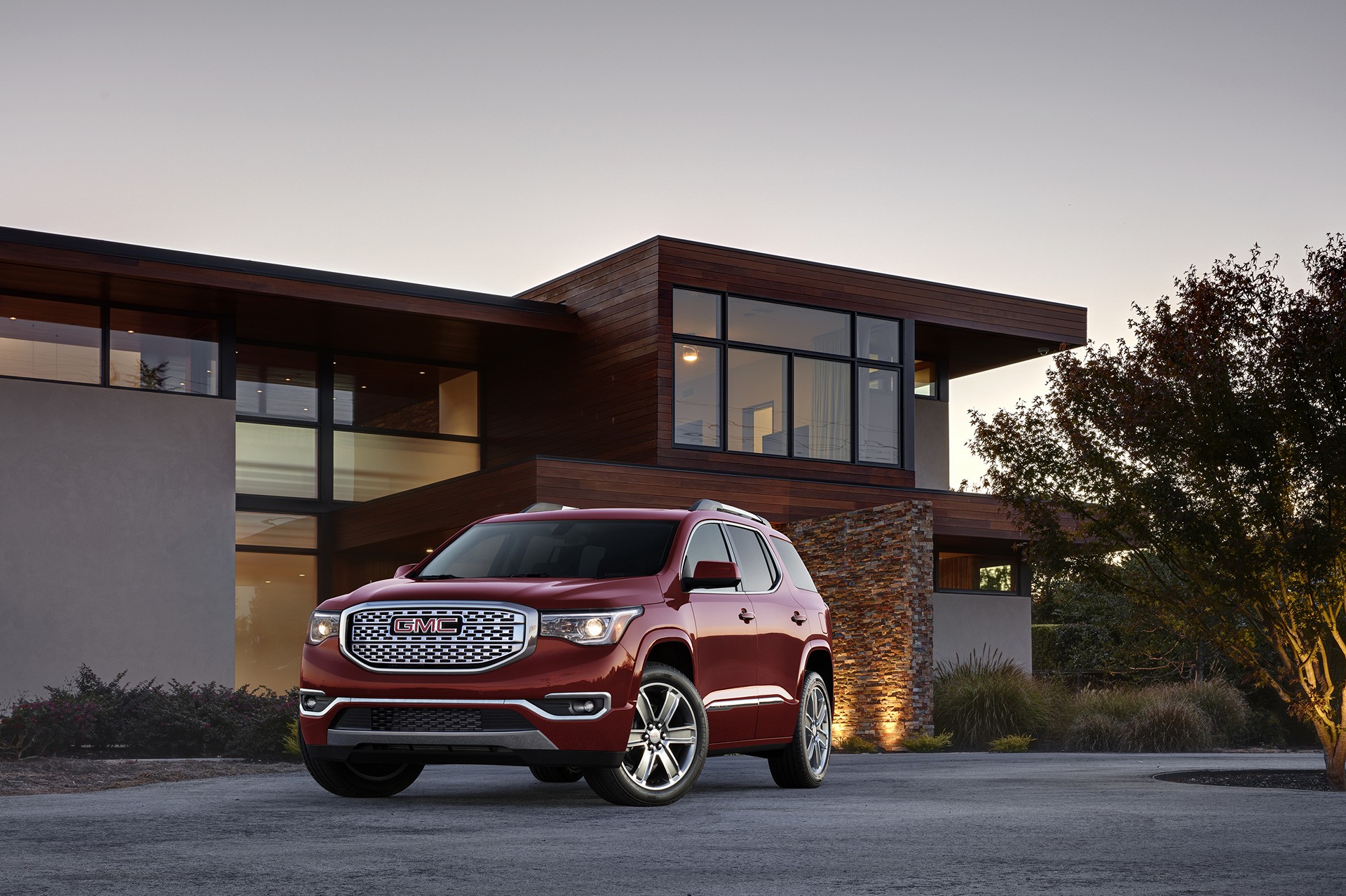 The all-new 2017 Acadia – a reimagined crossover aimed at the heart of the midsize segment, designed to offer great versatility and refinement, with more advanced safety technologies.

The new Acadia offers more-efficient powertrains, while continuing to offer three rows of seating on most models. The premium Acadia Denali returns, along with a new All Terrain model offering enhanced off-road capability.

“GMC is a strong, growing premium brand and the Acadia is a cornerstone of our success story,” said Duncan Aldred, vice president of GMC Sales and Marketing. “The all-new Acadia leverages GMC’s proven SUV experience to take on and shake up one of the largest vehicle segments, with a strong blend of design, technology and capability.”

The new Acadia goes on sale this spring, almost a decade after its original introduction, and coming off of its strongest sales year ever in 2015 with 96,393 deliveries.

“Typically, a vehicle’s sales can be illustrated on a bell curve during its lifecycle, but the Acadia’s success has defied convention with impressive sustainability,” said Aldred. “It’s a shining example of GMC’s momentum and we’re confident it will grow with the new Acadia.” 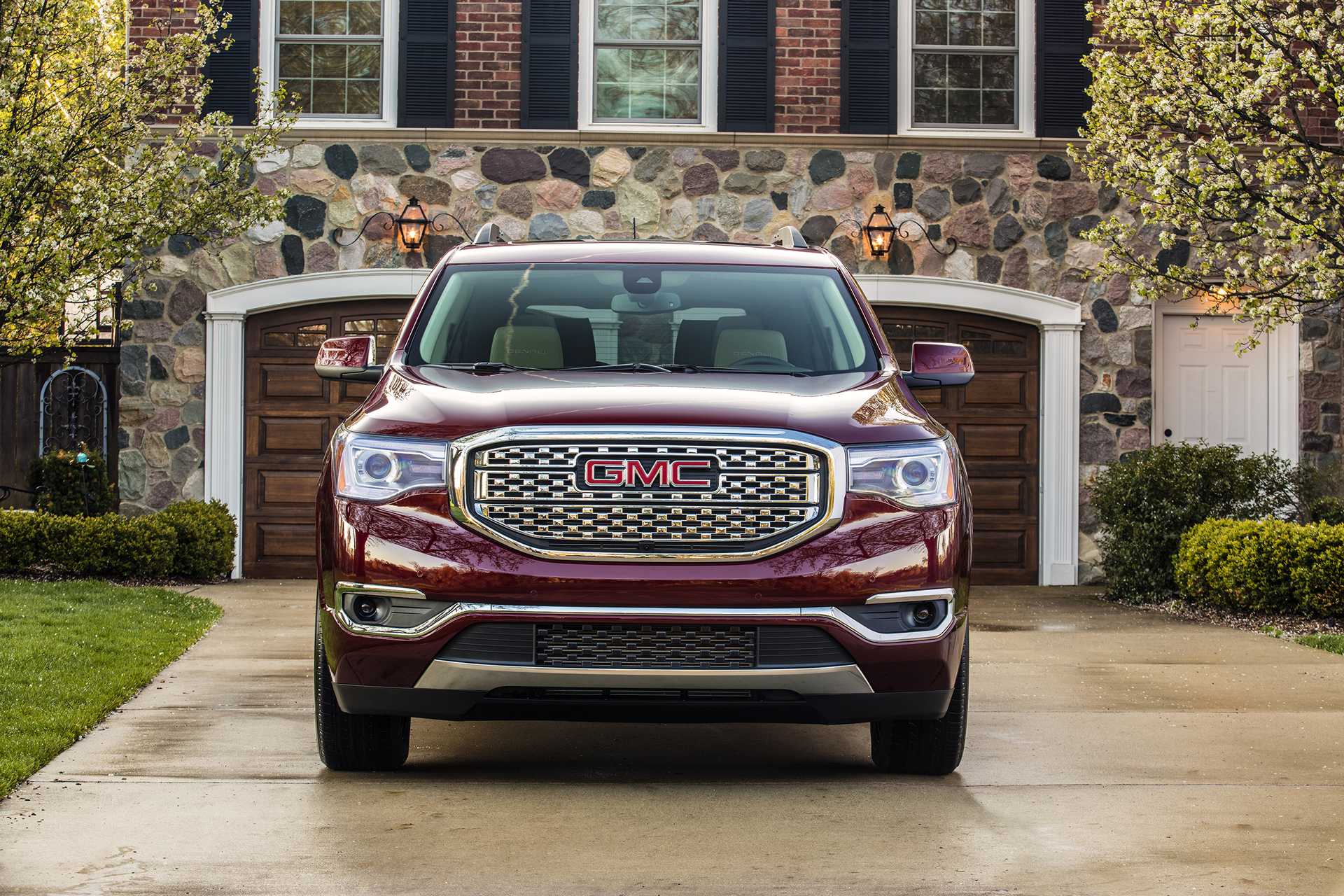 The strategic re-scoping of the 2017 Acadia offers customers a midsize crossover positioned between the compact Terrain and full-size Yukon. Depending on the model, it is available with five-, six- or seven-passenger seating, while offering greater maneuverability than the first-generation model.

“The new Acadia captures a greater feeling of refinement, in everything from the responsive feeling behind the wheel to the way passengers interact with its intuitive features,” said Rick Spina, executive chief engineer for compact and crossover SUVs at General Motors. “It’s a vehicle that offers the functionality Acadia is known for, while delivering big advantages and balance to customers’ everyday lives.”

The new Acadia is 700 pounds lighter than the current model, which pays dividends at the gas pump. A new, 2.5L engine is standard, offering an estimated 28 mpg on the highway for FWD models (EPA estimate not yet available; estimate is based on GM testing). City fuel economy offered is GM-estimated at 22 mpg (FWD) and is bolstered by GMC’s first application of Stop/Start technology, which enhances efficiency in stop-and-go driving. 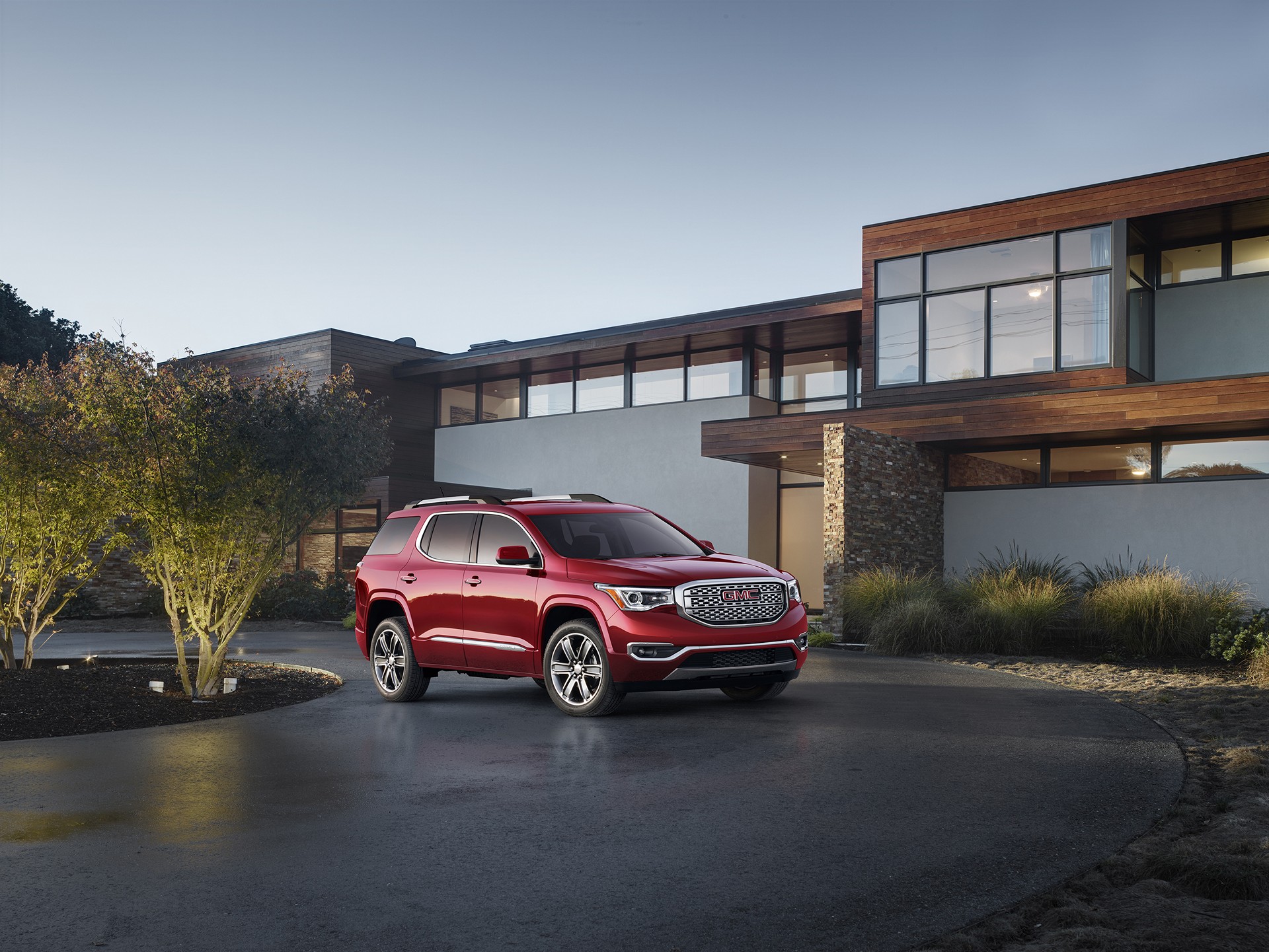 A new, available 3.6L V-6 engine is more powerful and efficient than the current model, while offering 4,000 pounds estimated trailering capability (with the available towing package). It is GM-estimated at 310 horsepower (231 kW) and 25 mpg highway (FWD models – EPA estimate not available).

Both of the Acadia’s new engines feature direct injection and variable valve timing, and both are mated to six-speed automatic transmissions and an electronically controlled drive mode selector.

Legacy of functionality and spaciousness 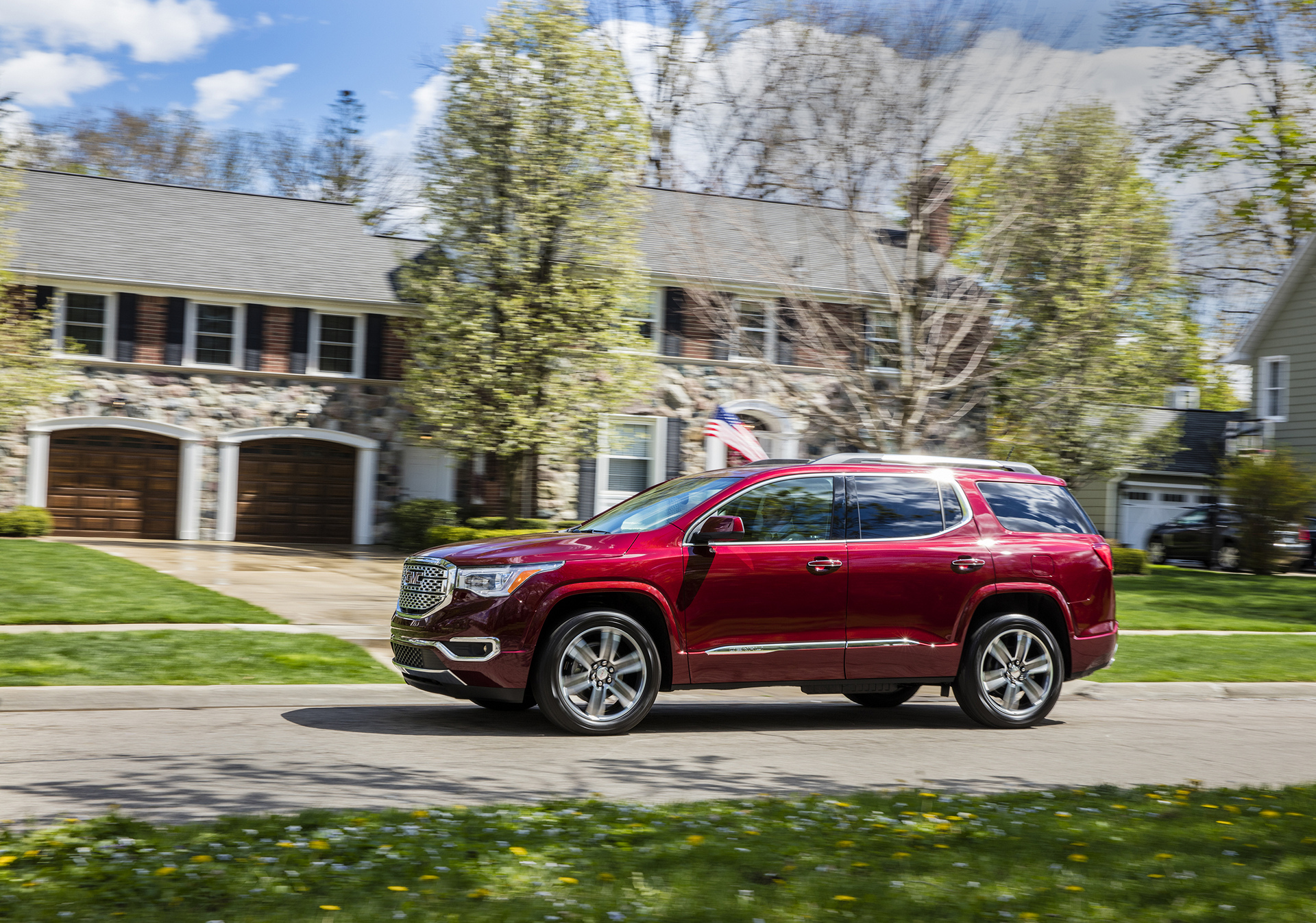 The 2017 Acadia builds on a legacy of intuitive functionality, with new features such as a split-folding second-row seat that improves on the original Smart Slide feature of the current model. It offers greater flexibility, including the capability of the curbside seat sliding and tilting forward, even with a forward-facing child seat in place, while the driver-side section tips and slides forward for easier access to the third row.

Additional solutions range from simple to technologically advanced. The rear of the center console, for example, features a unique pull-out storage drawer. It is accessible to rear-seat passengers and allows items such as electronic devices and small toys to be stored out of sight, for greater security and reduced clutter.

There’s also a new, standard rear seat alert that can remind the driver when an item may have been left in the second- and third-row seats. Additionally, all three rows offer USB charge ports for compatible electronic devices.

The new Acadia offers a greater emphasis on refinement, while remaining instantly recognizable with an evolution of the vehicle’s signature, professional grade design cues such as a chrome-trimmed grille, squared off and flared wheel arches and wraparound rear side windows with dark D-pillars.

Premium cues distinguish the Acadia Denali. Like all Denali models, it features a dimensional chrome grille, along with integrated chrome side trim, chrome-accented door handles, a chrome lower-rear fascia and specific six-spoke wheels.

As a contemporary crossover designed for families on the go, the 2017 Acadia offers the latest active safety features to protect them, as well as the latest technologies to keep them connected.

The active safety features are designed to help make drivers more aware of their surroundings and potential crash situations. They are available depending on the model and include:

An available Tow Vision Trailering system helps make hitching easier by employing a rear-vision camera, with dynamic guidelines, to help line up the Acadia’s hitch with the trailer, as well as offering views of the trailer while driving.

And when it comes to connectivity, the Acadia is plugged in with available phone integration technology through GMC’s available IntelliLink system. It offers support for Apple CarPlay and Android Auto, making it easy to connect to some of the features smartphone users rely on most. (Vehicle user interfaces are products of Apple and Google and require a compatible smartphone and adherence to data plan rates, terms and privacy statements.) 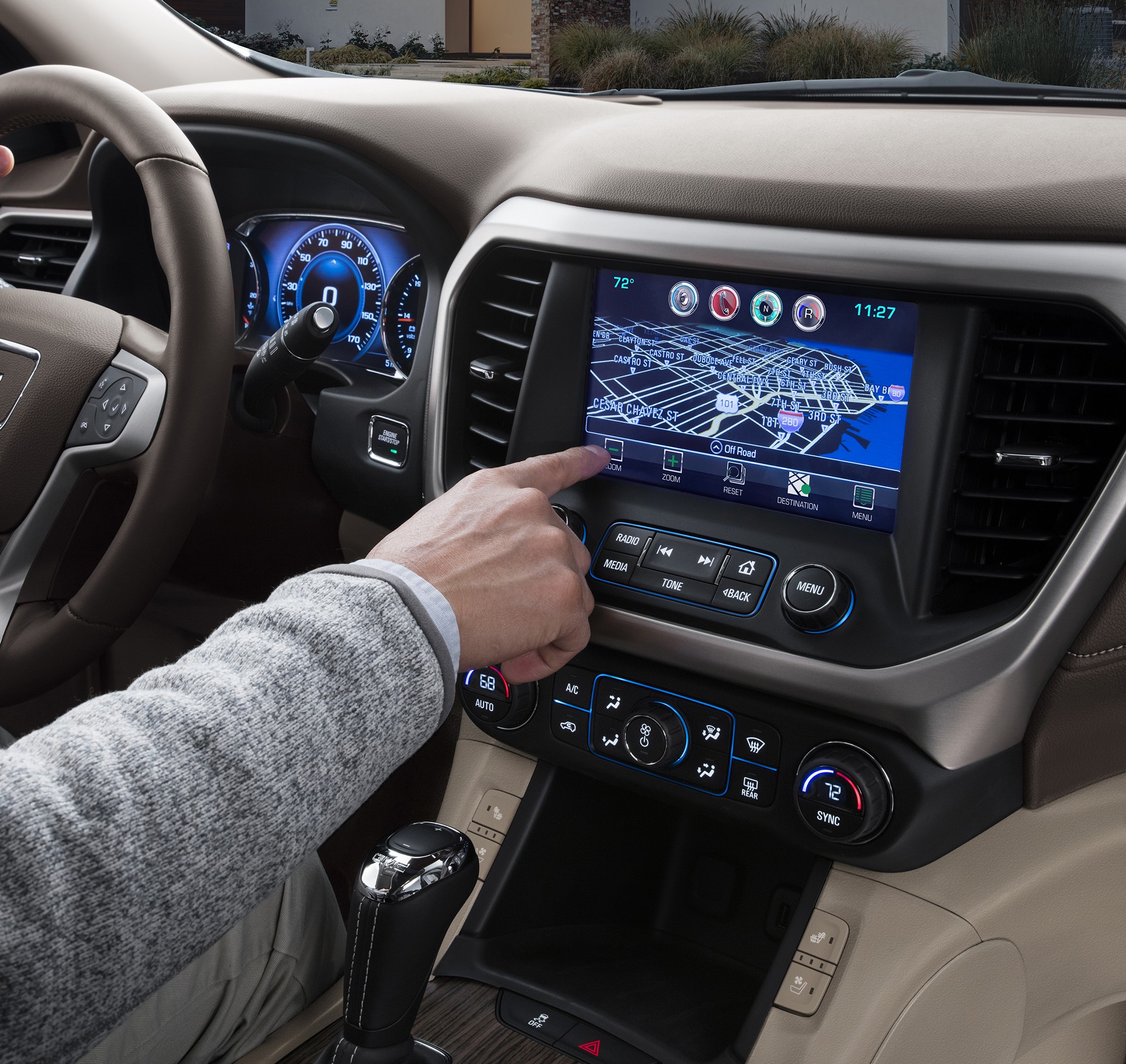 Additionally, an available OnStar 4G LTE Wi-Fi hotspot provides a mobile hub for drivers and passengers to stay connected. The hotspot is on whenever the vehicle is on and comes with a three-month/three-gigabyte data trial. 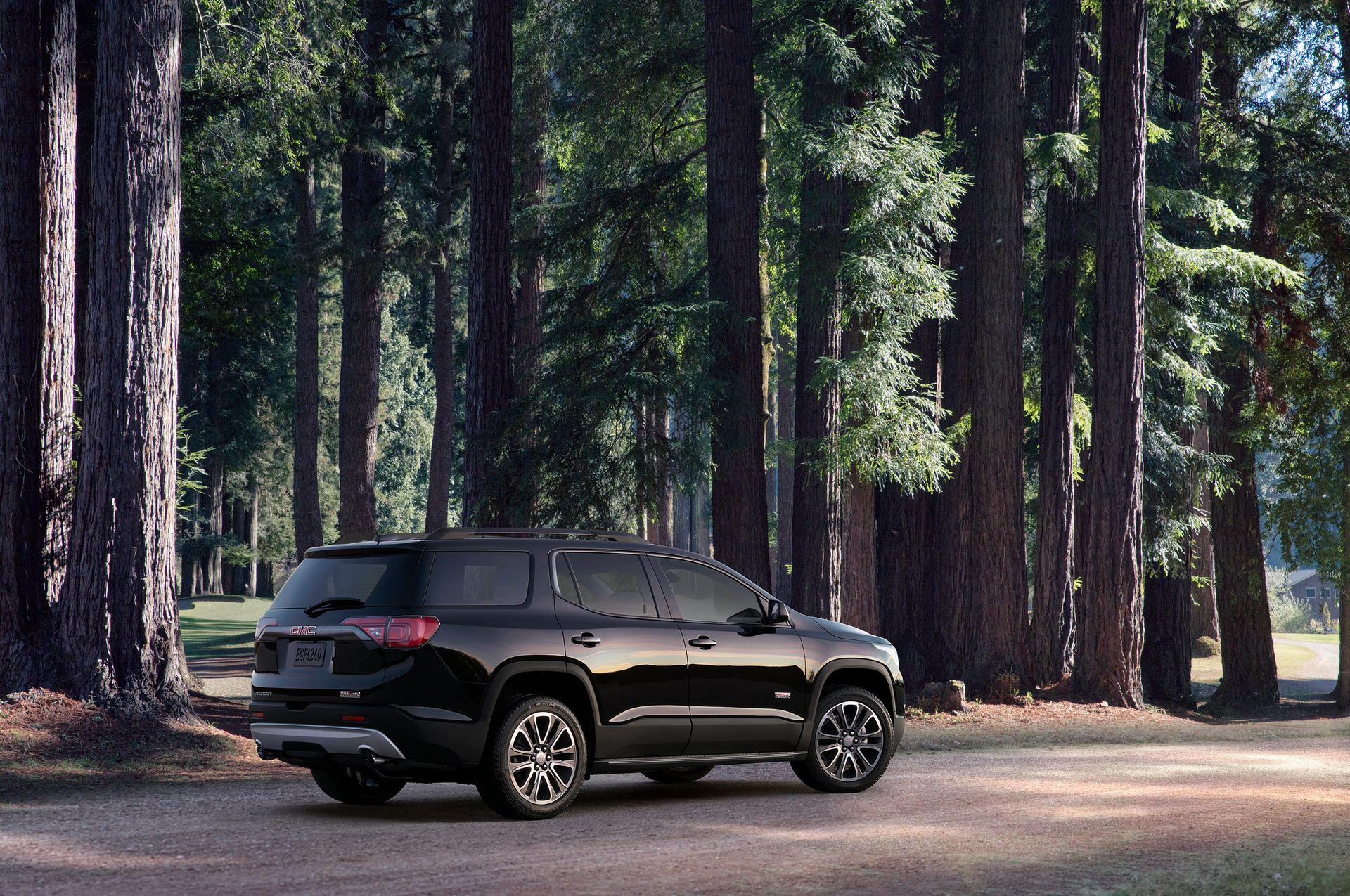 Built on a new, lighter body structure, the 2017 Acadia’s driving dynamics are more responsive, while its shorter length and narrower width enable greater maneuverability, for easier turning in parking decks and easier parking in home garages.

The body structure incorporates press-hardened, high-strength steels, which allowed thinner components in some areas offering comparable or better crash performance than conventional materials. They also help reduce the base curb weight by 700 pounds (318 kg), compared to the current model.

The AWD disconnect mode effectively disconnects the rear axle from the drive system to save fuel. On-demand AWD capability can be reapplied on the go by switching the drive mode selector to 4×4 mode. 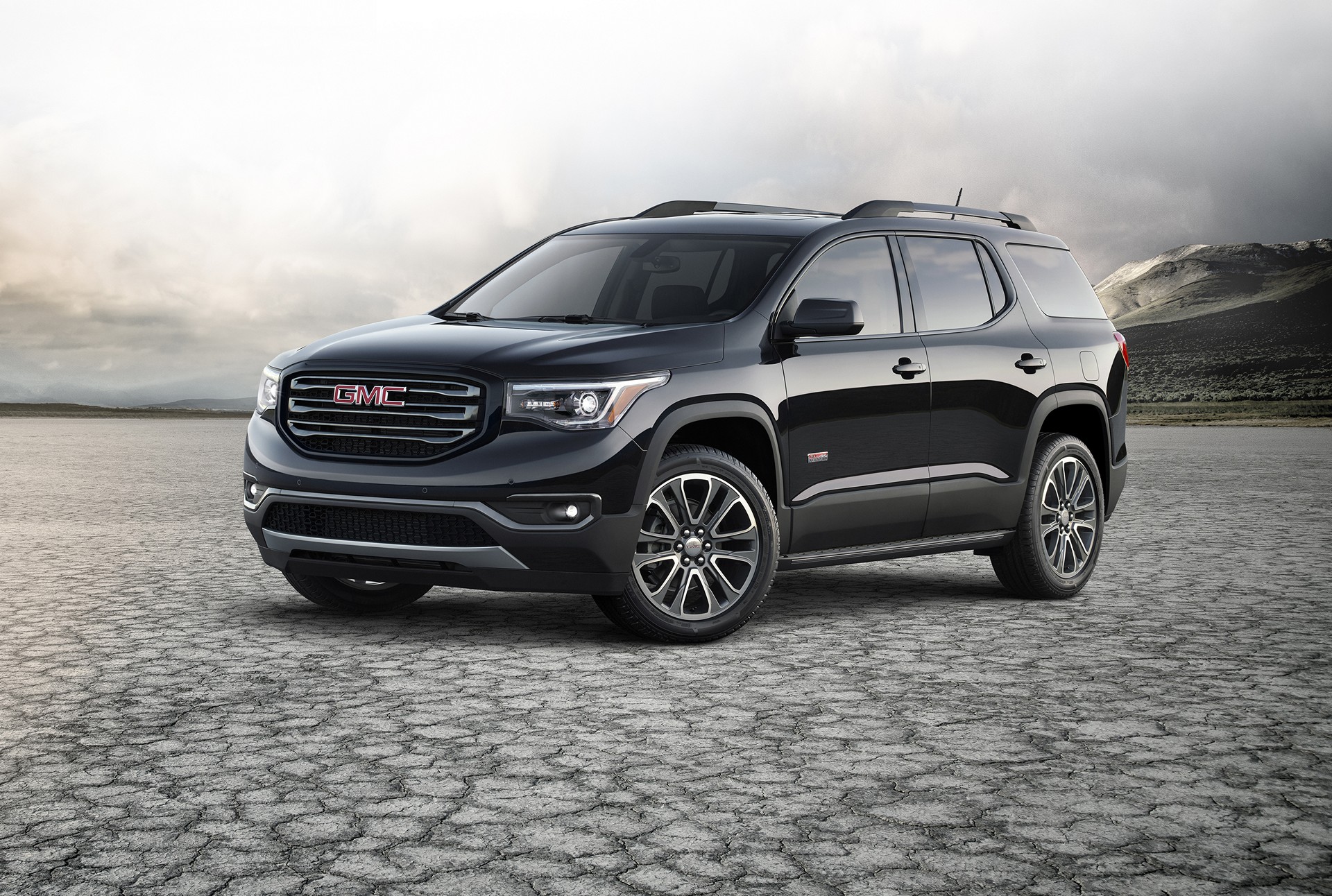 At the heart of the Acadia All Terrain’s capability is an advanced AWD system with Active Twin Clutch, which optimizes traction for every condition it encounters. And while it is engineered for optimal performance in wet, snowy and icy conditions, it also provides enhanced stability in dry conditions.

It also has a specific All Terrain mode in place of the Off Road mode on the drive mode selector, which works with the model’s exclusive AWD system to offer enhanced hill-climb capability. 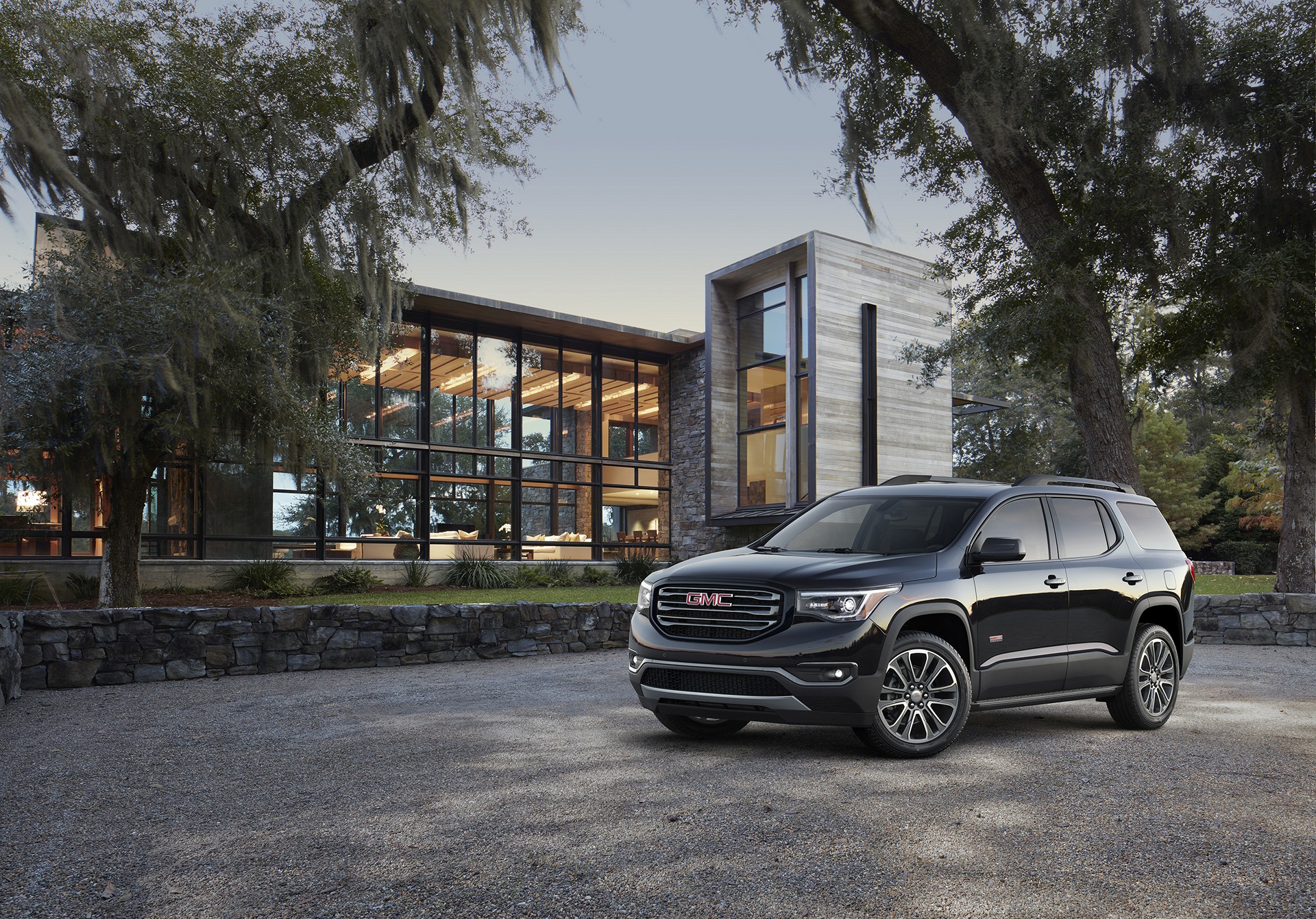 All Terrain models are distinguished from the rest of the Acadia lineup with a body-color grille surround, black chrome trim and unique wheels. Inside is exclusive five-passenger seating, dynamic All Terrain interior accents and covered storage bins in the rear cargo floor in place of a third-row seat. 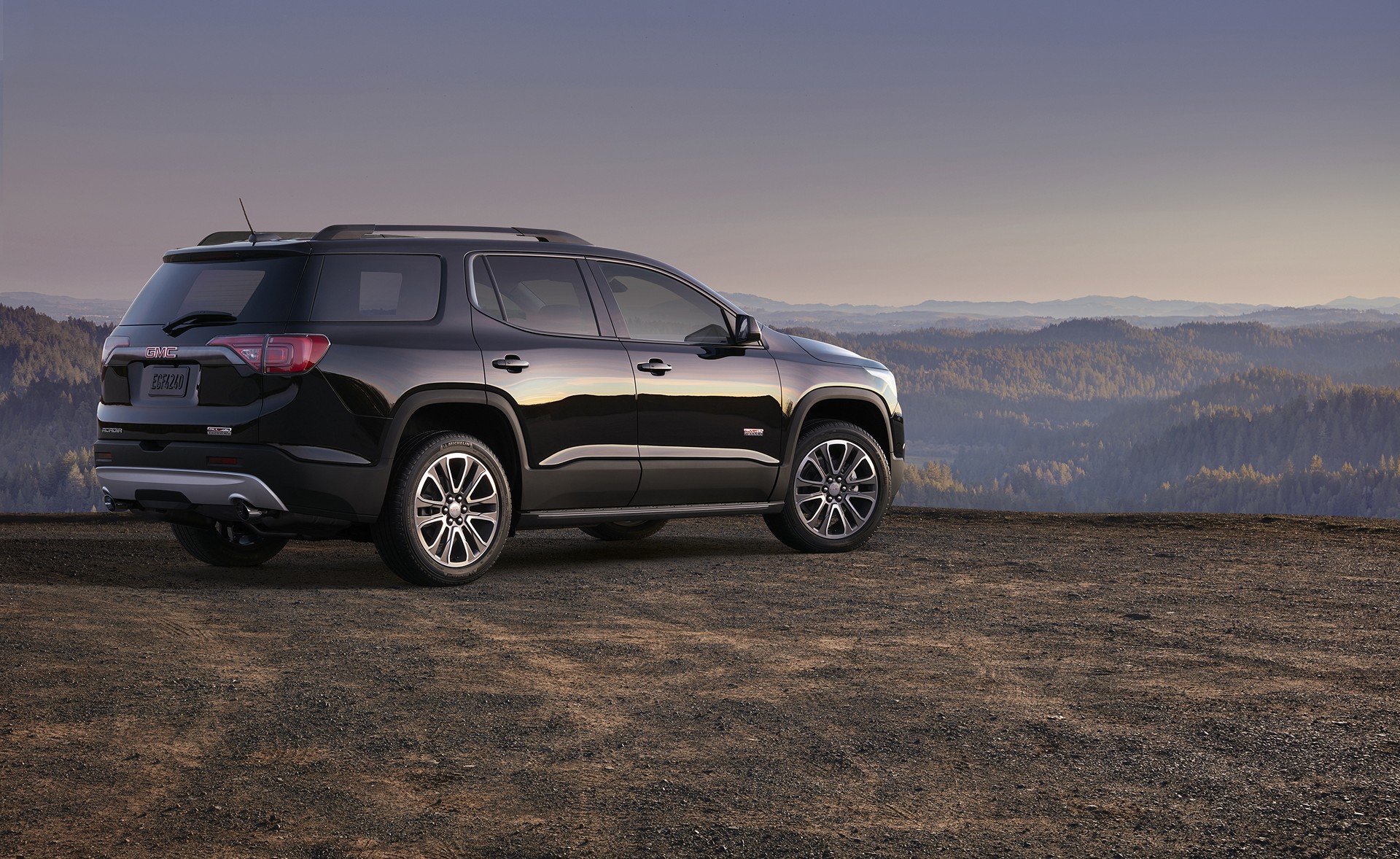