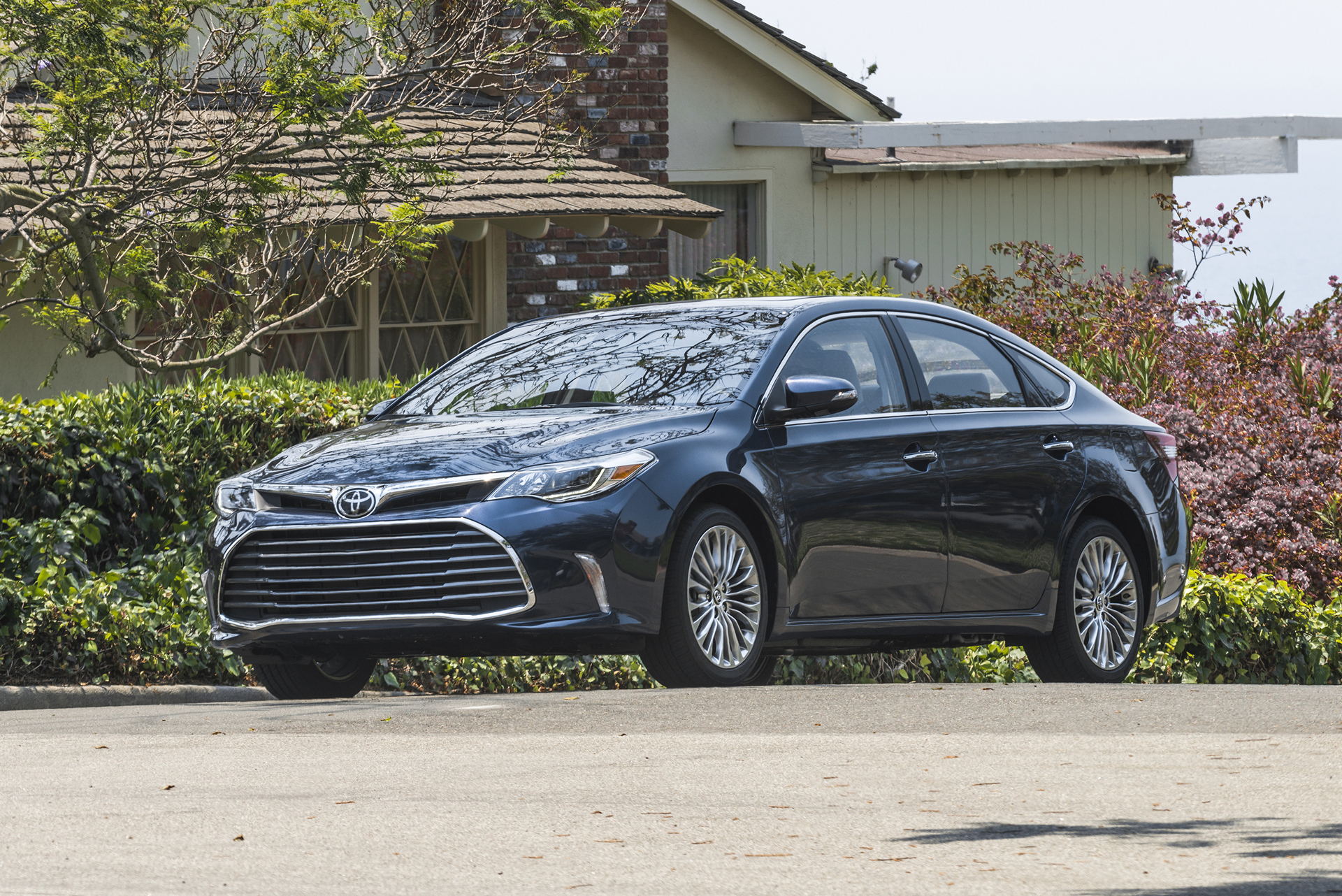 Already a benchmark for style, comfort and available hybrid fuel economy in the premium midsize sedan category, the 2017 Toyota Avalon ups the ante for standard safety with the addition of Toyota Safety Sense™-P (TSS-P) for all grades. The TSS-P system had previously been offered only as an option on the Limited grade. The system equips the Avalon with Automatic High Beam, Dynamic Radar Cruise Control, Pre-Collision System with Pedestrian Detection and Lane Departure Alert with Steering Assist. 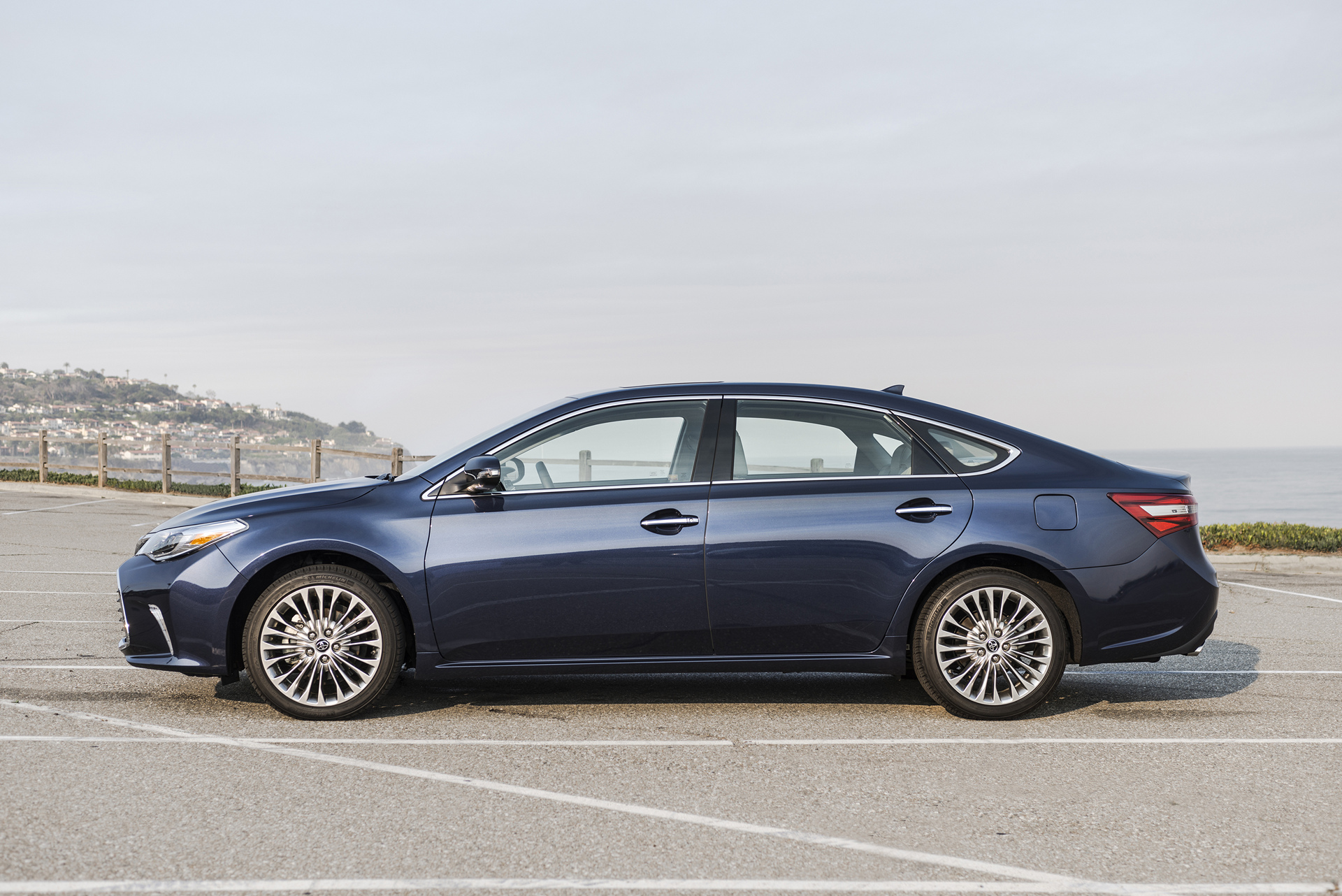 The move to make TSS-P standard on all Avalon grades (and numerous other Toyota models) follows Toyota’s promise to offer TSS standard on nearly all its models by the end of 2017. That will put Toyota (and Lexus) four years ahead of the model-year 2022 industry target announced by the National Highway Traffic Safety Administration (NHTSA) and Insurance Institute for Highway Safety (IIHS).

V6 or Hybrid? A Wise Choice Either Way 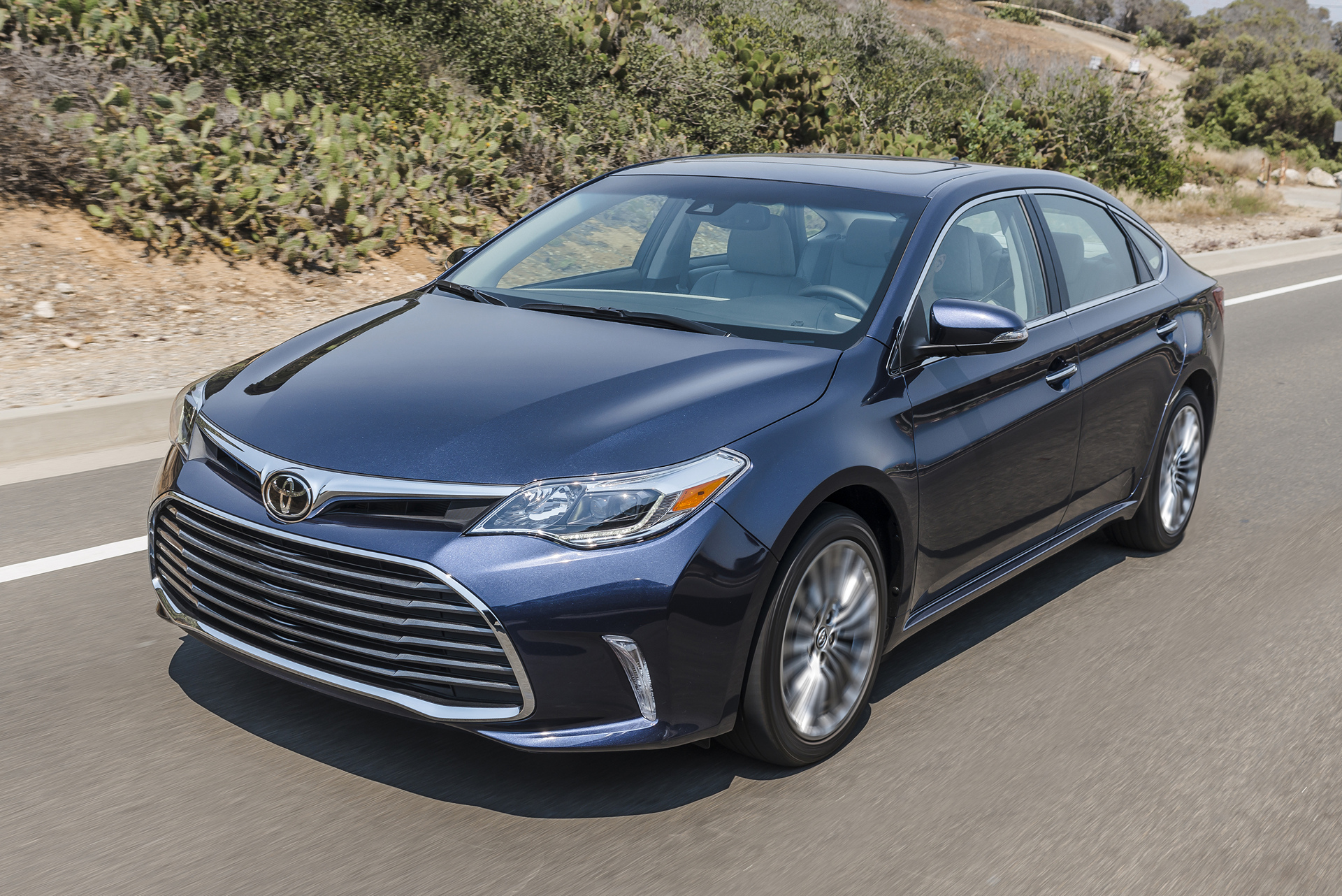 The Avalon was a unique midsize offering when it debuted more than 20 years ago, bringing class-above roominess and comfort to the segment. The Avalon remains unique in its segment for 2017 with the choice of powerful V6 or hybrid powertrains.

The Avalon’s 3.5-liter, DOHC V6 with Dual VVT-i (Variable Valve Timing with intelligence) produces 268 horsepower at 6,200 rpm and 248 lb.-ft. of torque at 4,700 rpm. Teamed with a 6-speed automatic transmission, the V6 impresses with both its acceleration and its EPA-rated 24 MPG combined fuel economy (21 city/30 highway).

If the V6 gives the Avalon the heart of a sport sedan, the steering-wheel-mounted paddle shifters and choice of Eco, Normal and Sport driving modes confirm the connection. Selecting Sport mode yields quicker throttle response and enhanced electric power steering feel, and raises transmission shift points. On downshifts, it “blips” the throttle, as the driver of a stick-shift sports car would. 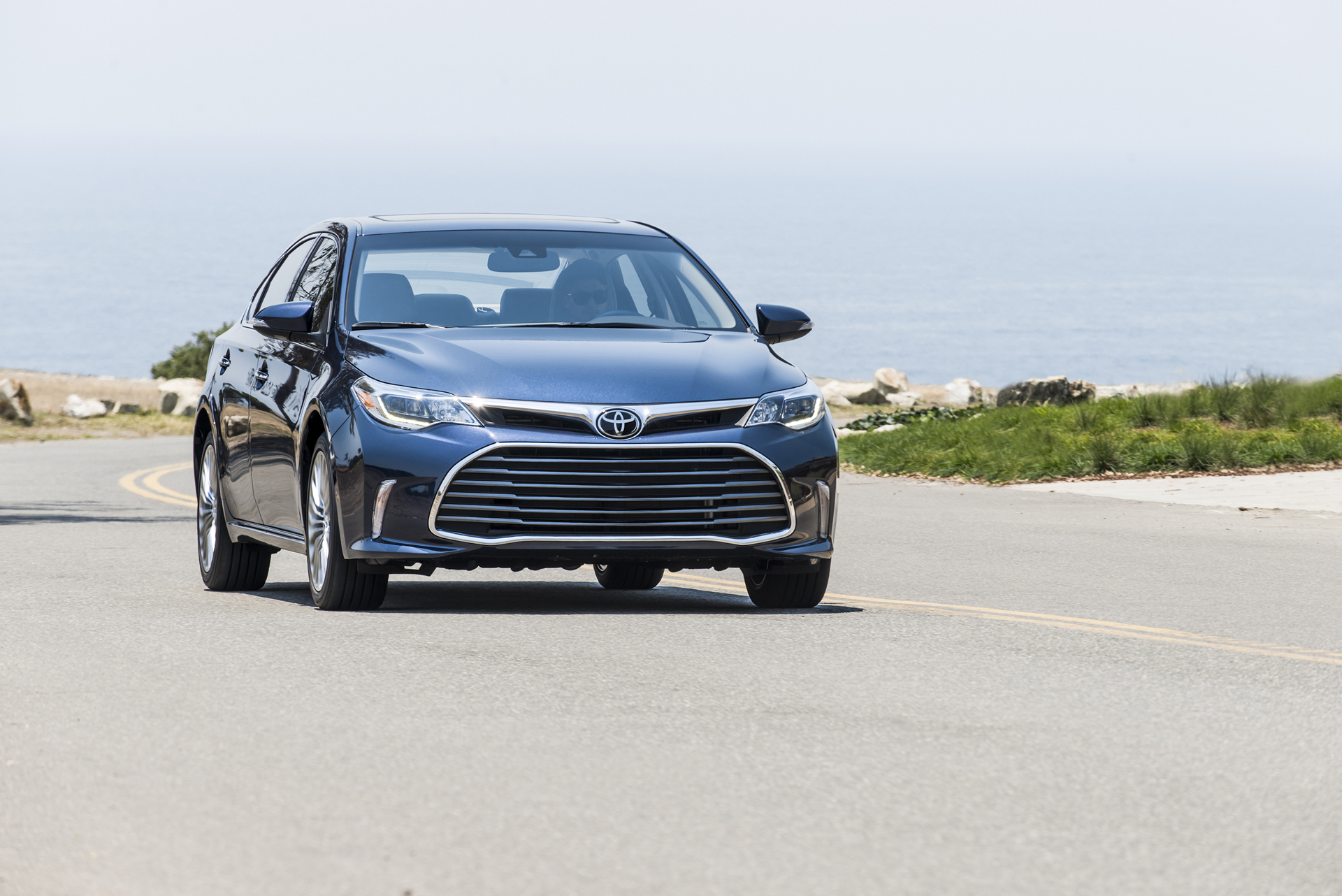 With two decades of global hybrid leadership behind it, Toyota naturally makes this high-efficiency technology available in its flagship sedan. In the Avalon Hybrid, the company’s renowned Hybrid Synergy Drive system combines output from a 2.5-liter Atkinson-cycle four-cylinder engine and a high-torque electric motor. The resulting combined 200 horsepower moves the Avalon Hybrid with verve, yet in a markedly seamless and quiet manner.

The hybrid system can switch between the gas engine and electric motor, or combine output from both, channeling torque through a unique planetary gear-type continuously variable transmission. An EV Drive mode enables the Avalon Hybrid to drive solely on the electric motor for a short distance at speeds under about 20 mph. 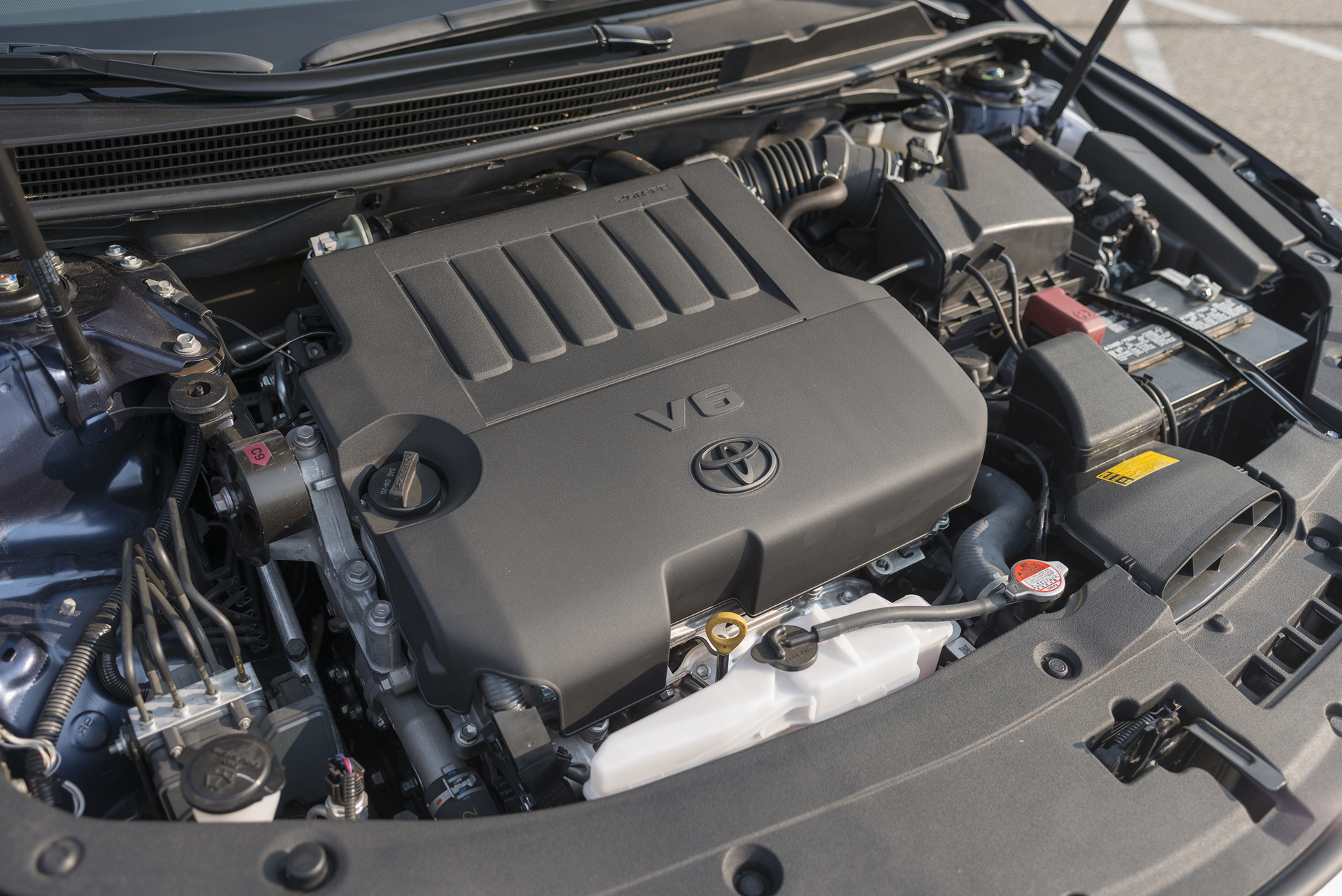 Augmenting the conventional brake system, regenerative braking produced by the electric motor/generator in the transaxle captures the kinetic energy of the wheels, storing it in the hybrid battery. That kind of hybrid intelligence, pioneered by Toyota, permeates the vehicle. For example, because the air conditioning and power steering systems are driven electrically, both continue to operate normally when the car is operating under electric power alone or when the auto start/stop system shuts off the gas engine.

Premium from the Paint Inward 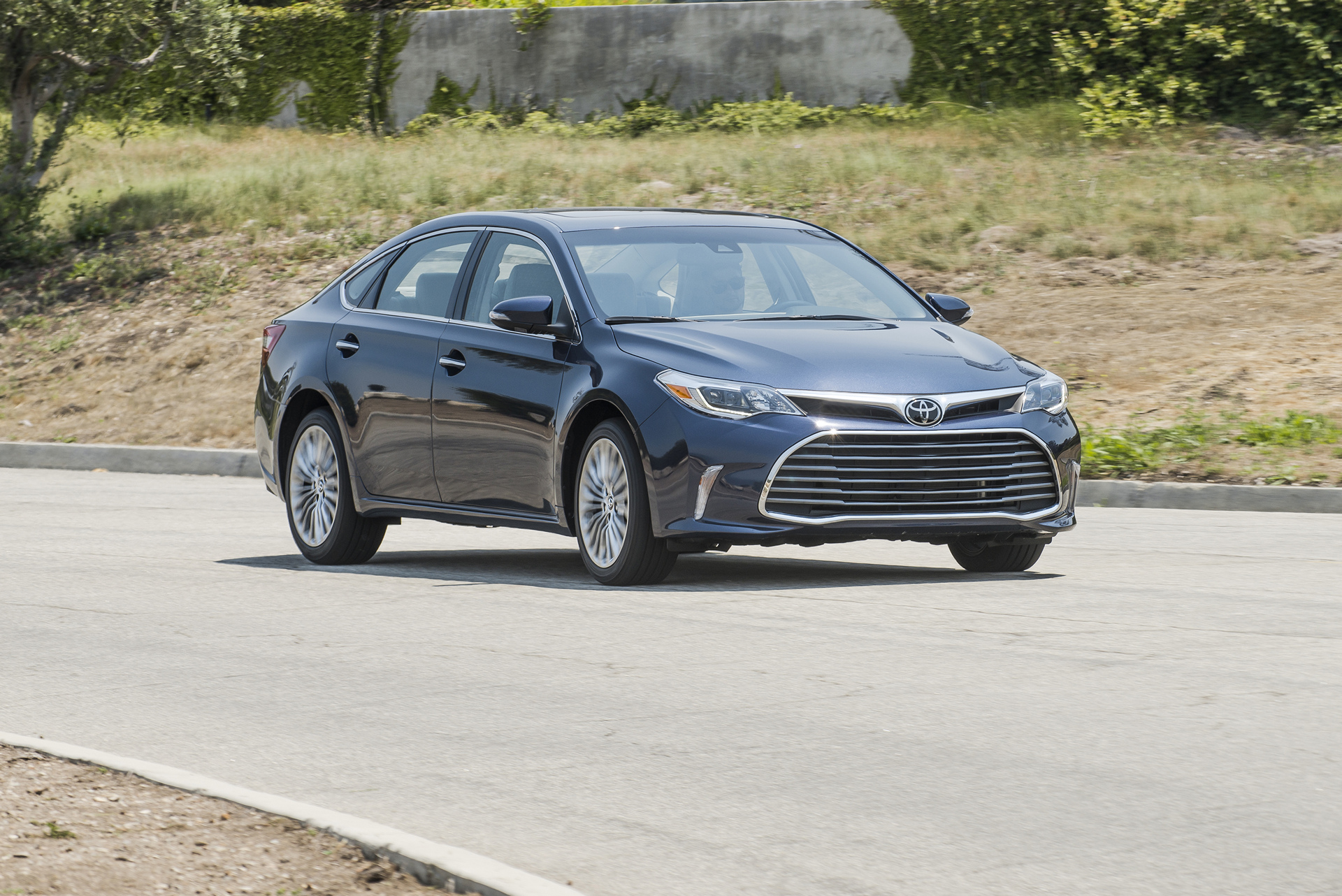 With its coupe-like profile, discrete chrome trim and ample cabin room, the Avalon presents a platform for luxury. Interior design and appointments certainly underscore that premise. One of the roomiest cabins in the segment, Avalon’s cabin comes in a choice of three interior color themes including almond, light gray and black.

A serene cabin remains an Avalon hallmark. Serenity is assured by strategically placed sound-absorbing and sound-insulating materials, including acoustic-type glass used for the windshield and side glass and foam injected into the A-, B- and C-pillars and rocker panels.

Premium amenities and design touches define the Avalon interior, with no detail too small to contribute to the high quality feel. The power windows, for example, slow down as they approach the top of the window frames, and the coin box features a damper for smooth opening and closing. The steering column tilts and telescopes. Elegant smoke chrome trim surrounds the center panel, while glossy trim frames the shifter.

Even the Avalon’s exterior color choices reflect a premium sensibility, with colors you might expect on a high-end model, such as Ooh La La Rouge Mica, Crème Brulee Mica, Sizzling Crimson Mica and Parisian Night Pearl. 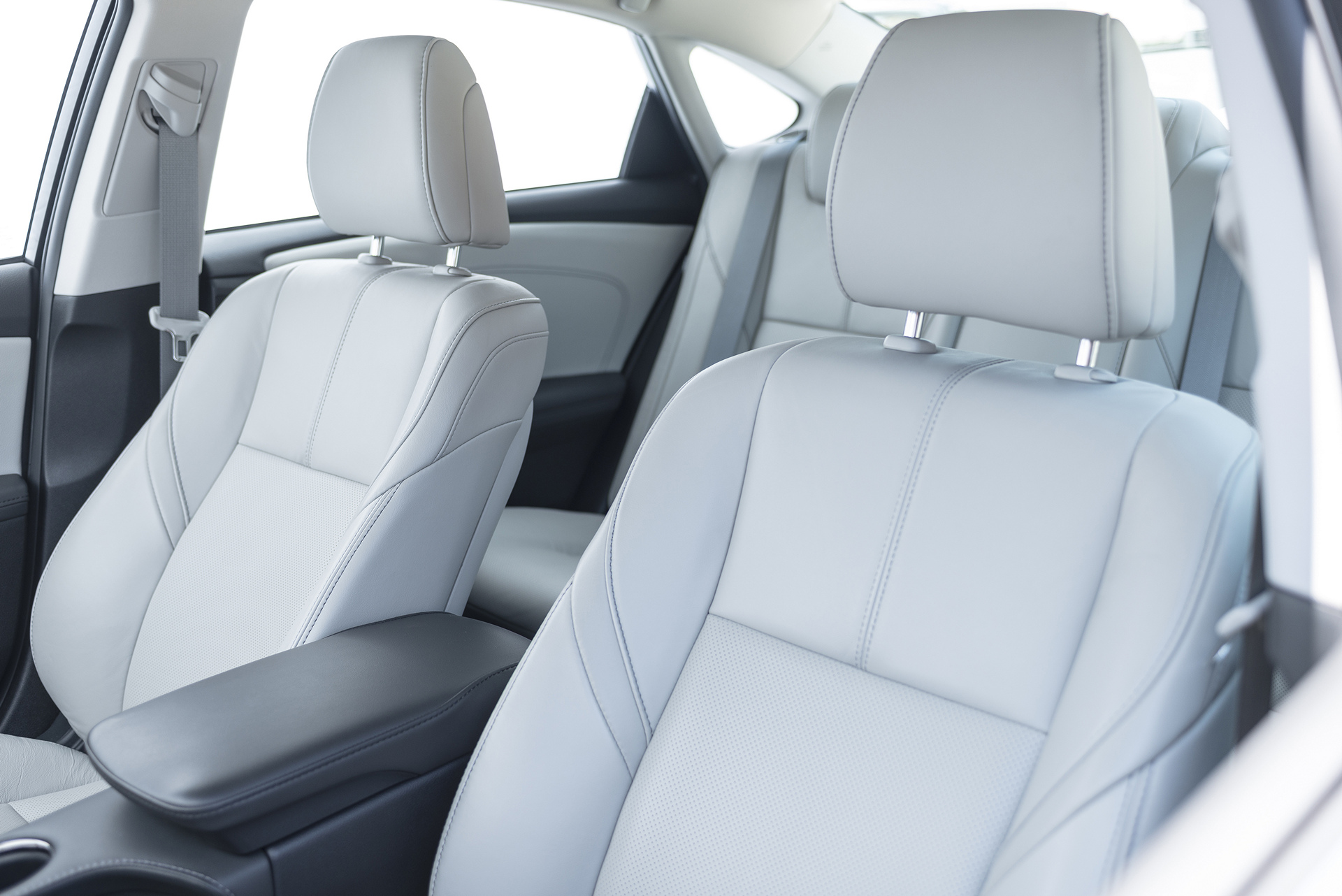 Premium features greet the Avalon driver and passengers in every model grade. The line starts with the XLE, which comes standard with medium-grain leather-trimmed seating, an 8-way power driver’s seat and 4-way power front passenger seat, both with multi-stage heating.

The rich-looking instrument panel uses Optitron-type gauges and a 3.5-inch thin-film transistor (TFT) color multi-information display. The leather-trimmed steering wheel conveniently puts numerous controls at the driver’s fingertips, including Entune™ Audio, information display and hands-free phone function. The steering wheel also includes buttons for voice recognition and a vehicle-to-vehicle distance switch for the standard Dynamic Radar Cruise Control (part of the Toyota Safety Sense P system). This grade has the Smart Key System on the driver’s side and trunk and remote illuminated entry (higher grades have the Smart Key on the passenger door, as well) 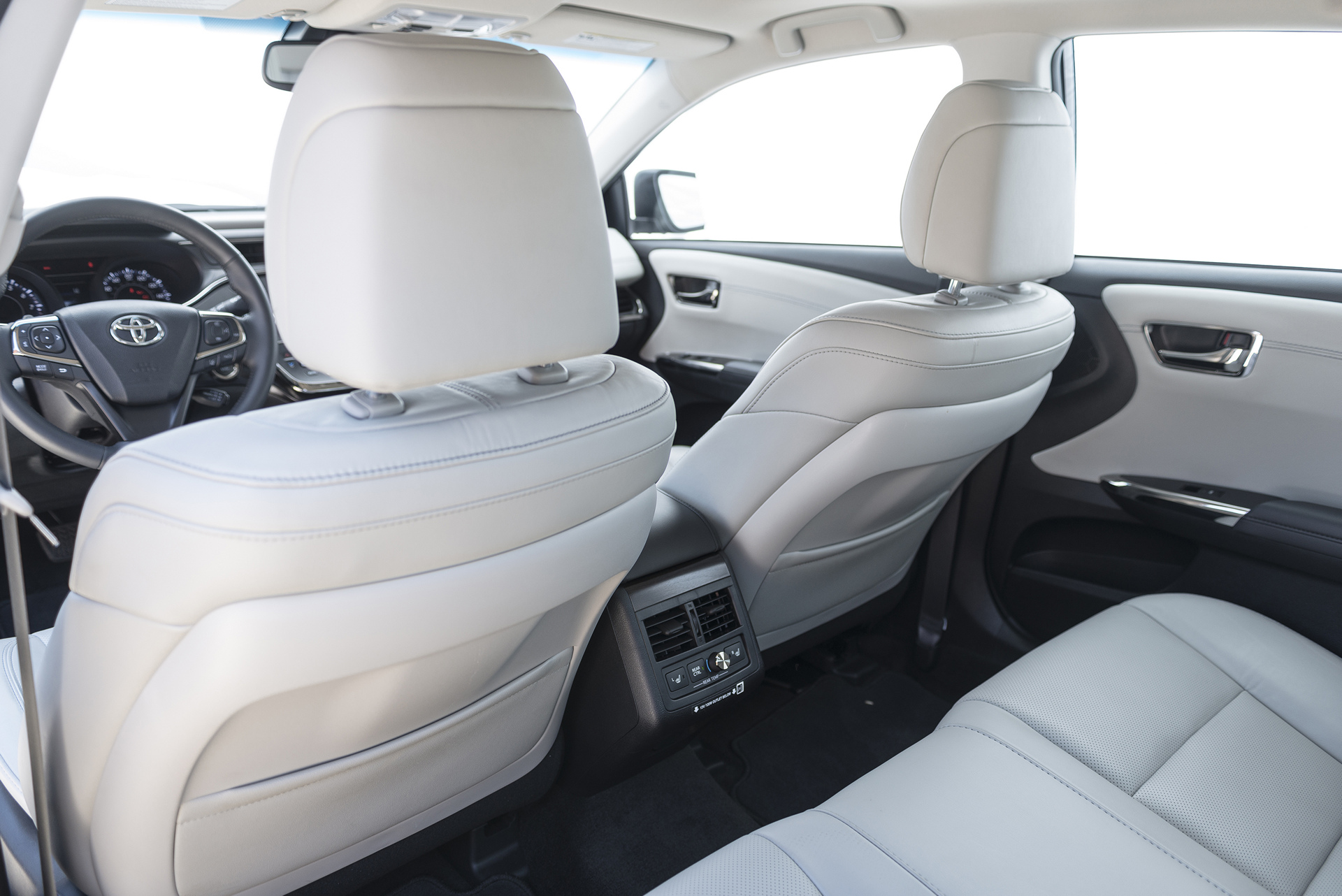 The XLE Plus is the first upgrade step for the gasoline model and the base grade for the Avalon Hybrid. This grade adds a power tilt/slide moonroof with sliding sunshade, and an auto-dimming rear view mirror with compass, map lights and HomeLink universal transceiver.

The Avalon caters to a device-centric world. Its eBin™ electronics storage tray in the center console can store two devices out of sight while they recharge. The eBin™ tray is illuminated by LEDs at night. Both the XLE Premium and Limited go wireless with Qi charging for compatible smartphones. 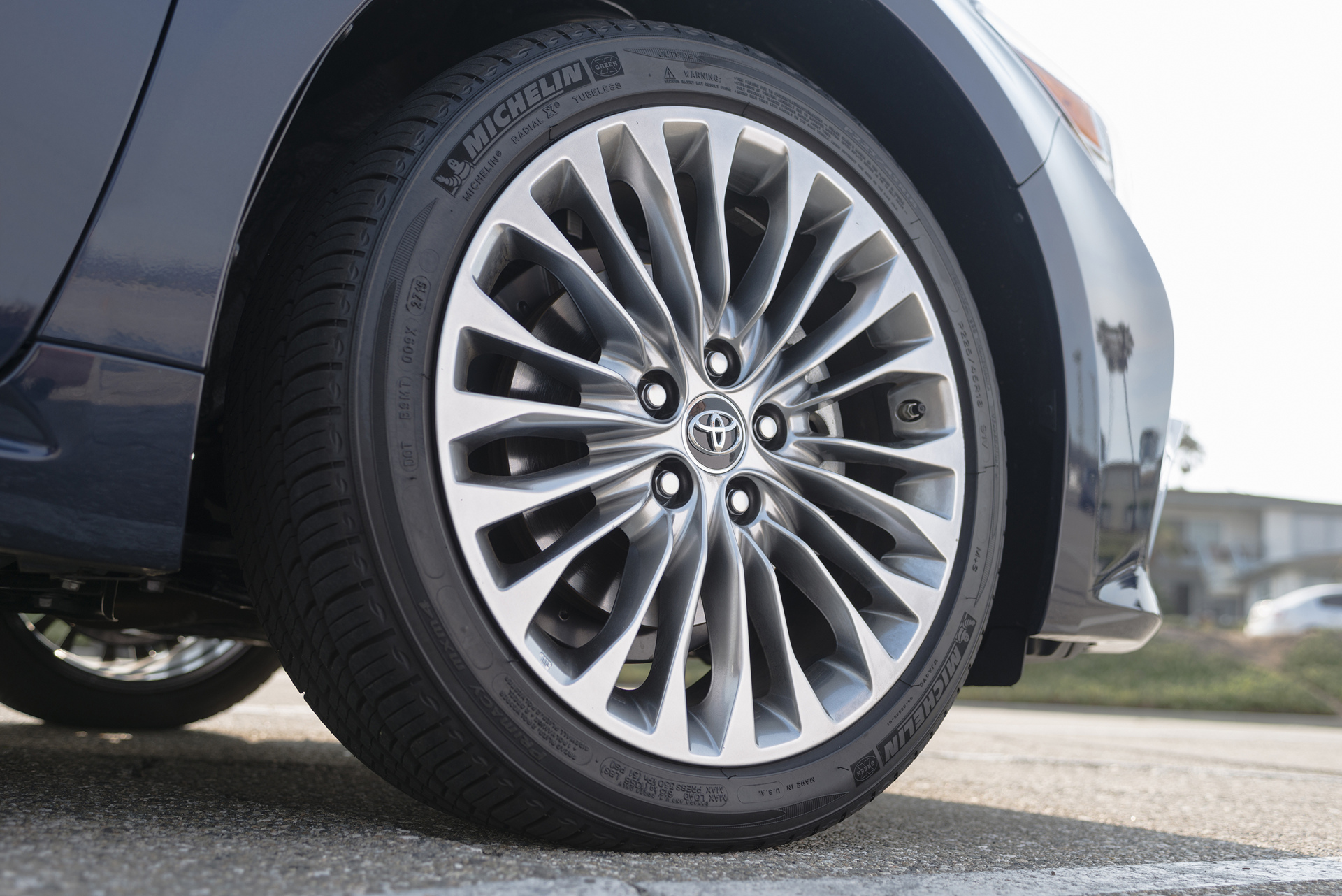 The Avalon Limited moves up to premium, perforated leather-trimmed front seats, along with a 10-way power-adjustable driver’s seat with power lumbar support and power cushion extension, and 8-way power front passenger seat. Both are heated and ventilated, and the rear seats are heated. The Limited’s automatic climate control system operates in three zones, including the rear seat area. (Other grades have a dual-zone system.) Intelligent Touch controls respond to a light touch, and can even be operated by hands with gloves or longer fingernails.

The rear window power shade in the Avalon Limited blocks the sun’s rays for the rear passengers. Shift into reverse, and the shade lowers, then rises again with the shift into Drive. A standard backup camera helps enhance rearward visibility for all Avalon models. In the Limited, dynamic guidelines superimposed on the display are a real boon to parking maneuvers by showing approximate distances from objects in the camera’s field of view. Super chrome alloy wheels put the finishing touch of elegance on the Limited – 17-in. on the Hybrid and 18-in. for the gas model.

Multitude of Multimedia Features with Entune® 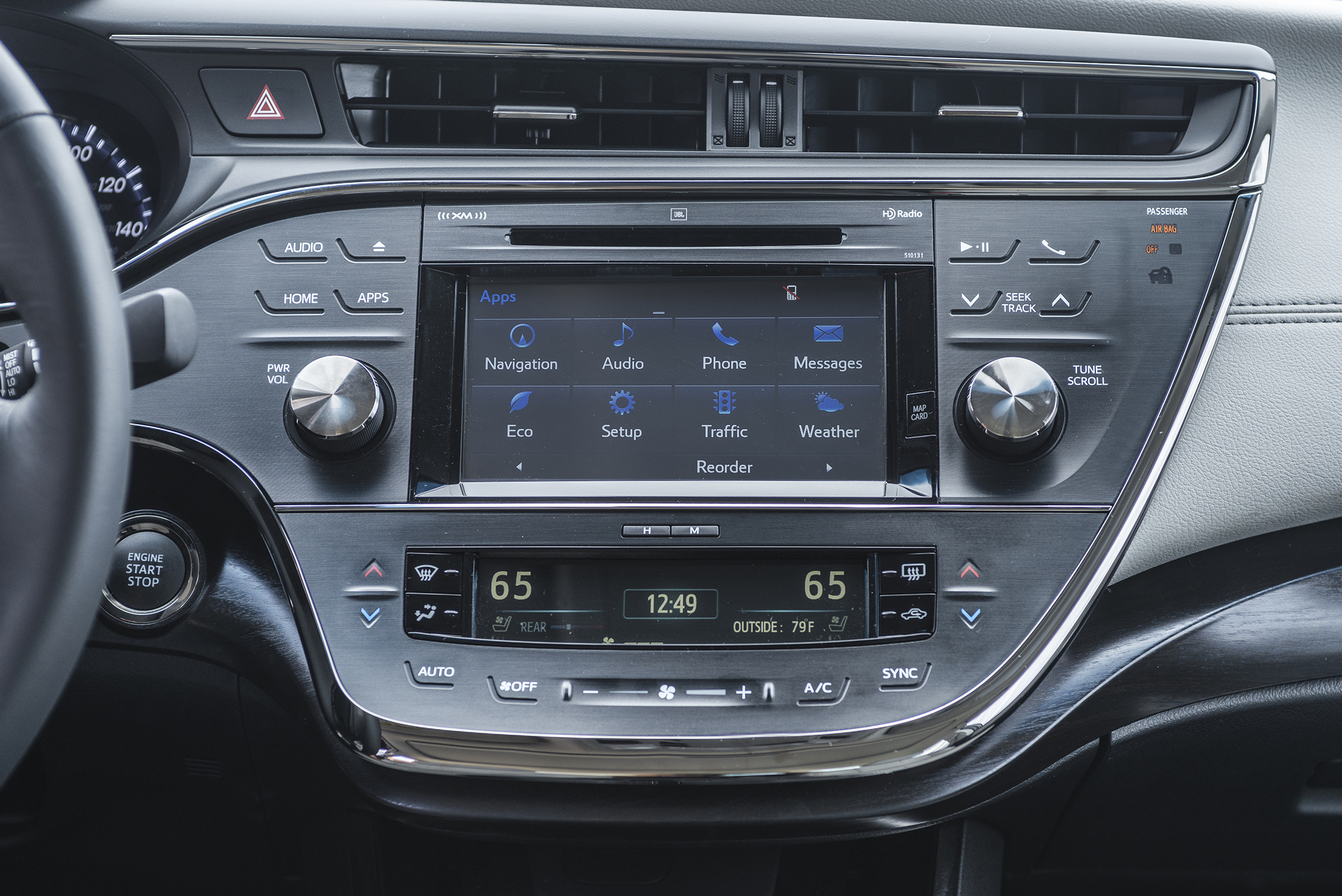 You can’t make luxury-car comparisons without offering luxury-grade audio and multimedia. Avalon does, playing music from just about any digital source, including that CD collection you still haven’t converted.

The 9-speaker Entune™ Premium Audio with Navigation in the XLE Premium and Touring grades use a 7-inch high-resolution touch screen with split-screen capability. The App Suite adds HD Radio™ predictive traffic and Doppler weather overlay, Gracenote album cover art and AM/FM cache radio, which lets you pause up to 20 minutes of a broadcast to replay later. Toyota’s Entune® App Suite functions through a smartphone interface and brings applications including Destination Search™, iHeartRadio, MovieTickets.com™, OpenTable®, and Pandora® to the vehicle audio display.

The available Entune™ Premium JBL Audio with Navigation system uses a 12-channel JBL Synthesis amplifier and 11 JBL® speakers, including two subwoofers, and features GreenEdge™ technology that reduces power draw on the car’s electrical system. Lend it your ears and the reward will be yours.

Safety In All Directions 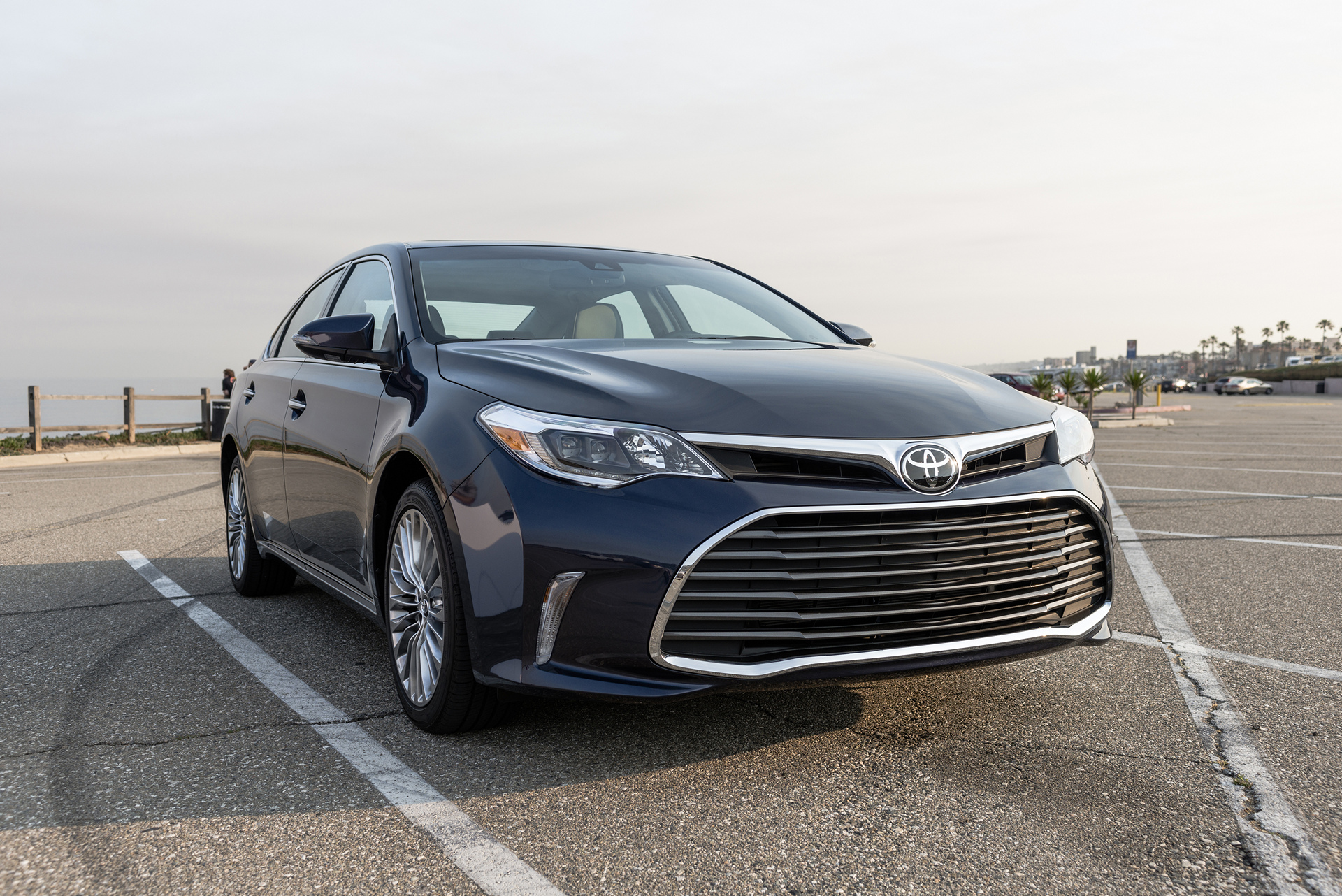 The available Blind Spot Monitor uses radar and is designed to detect vehicles in the adjacent lane where drivers may be challenged to see them. The same radar technology provides a Rear Cross Traffic Alert that is designed to detect low-speed cross traffic behind the vehicle when in reverse. Once an object is detected, the Blind Spot Monitor indicators flash in the appropriate outside mirror, and a signal also appears on the TFT color display.

Toyota’s 36-month/36,000 mile basic new-vehicle warranty applies to all components other than normal wear and maintenance items. Additional 60-month warranties cover the powertrain for 60,000 miles and against corrosion with no mileage limitation. The hybrid-related components, including the HV battery, battery control module, hybrid control module and inverter with converter, are covered for eight years/100,000 miles.