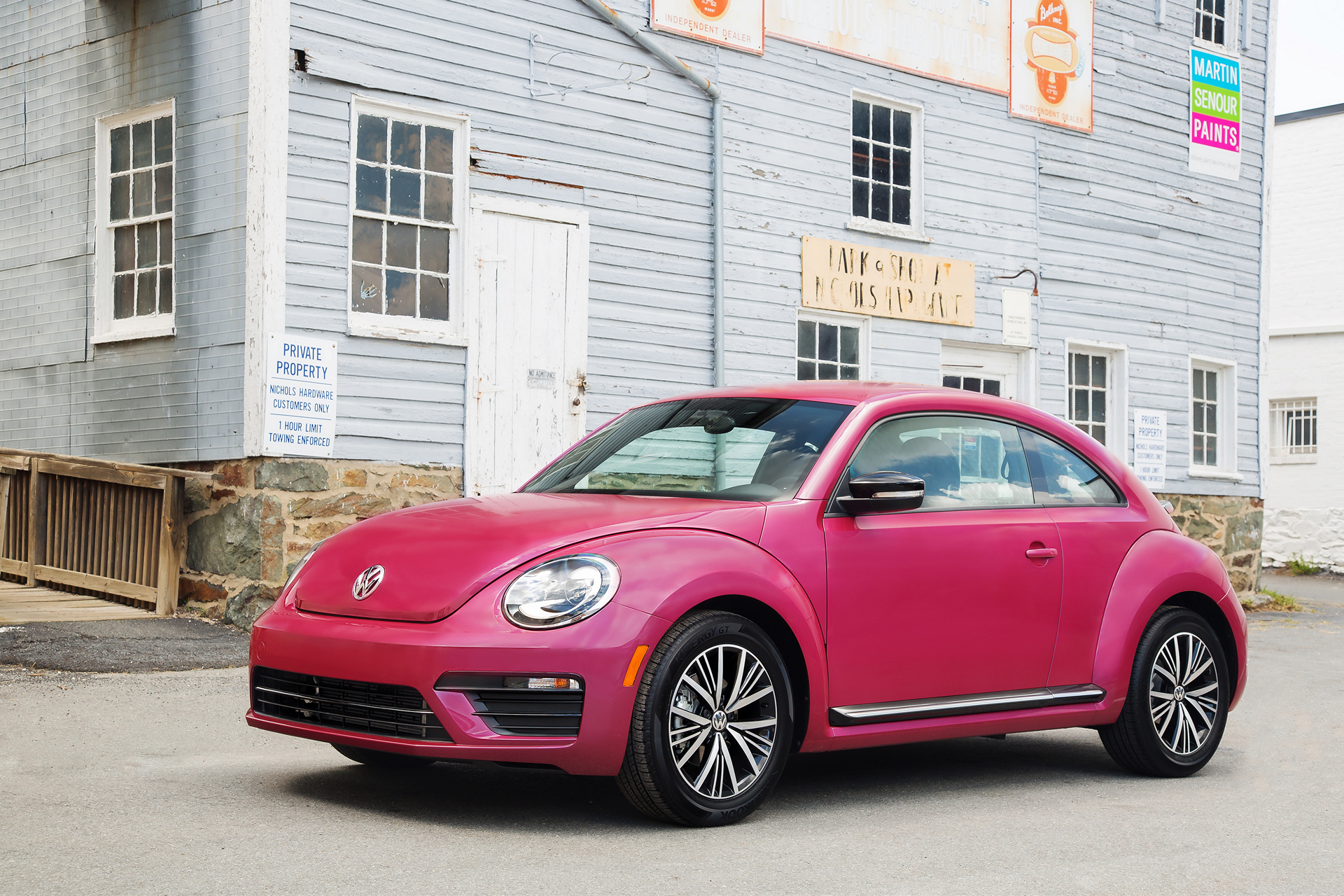 When the first Beetle rolled off the production line, it was simply called the Volkswagen—“the people’s car”—but its distinctive shape inspired nicknames across the globe and, in the end, Beetle stuck. 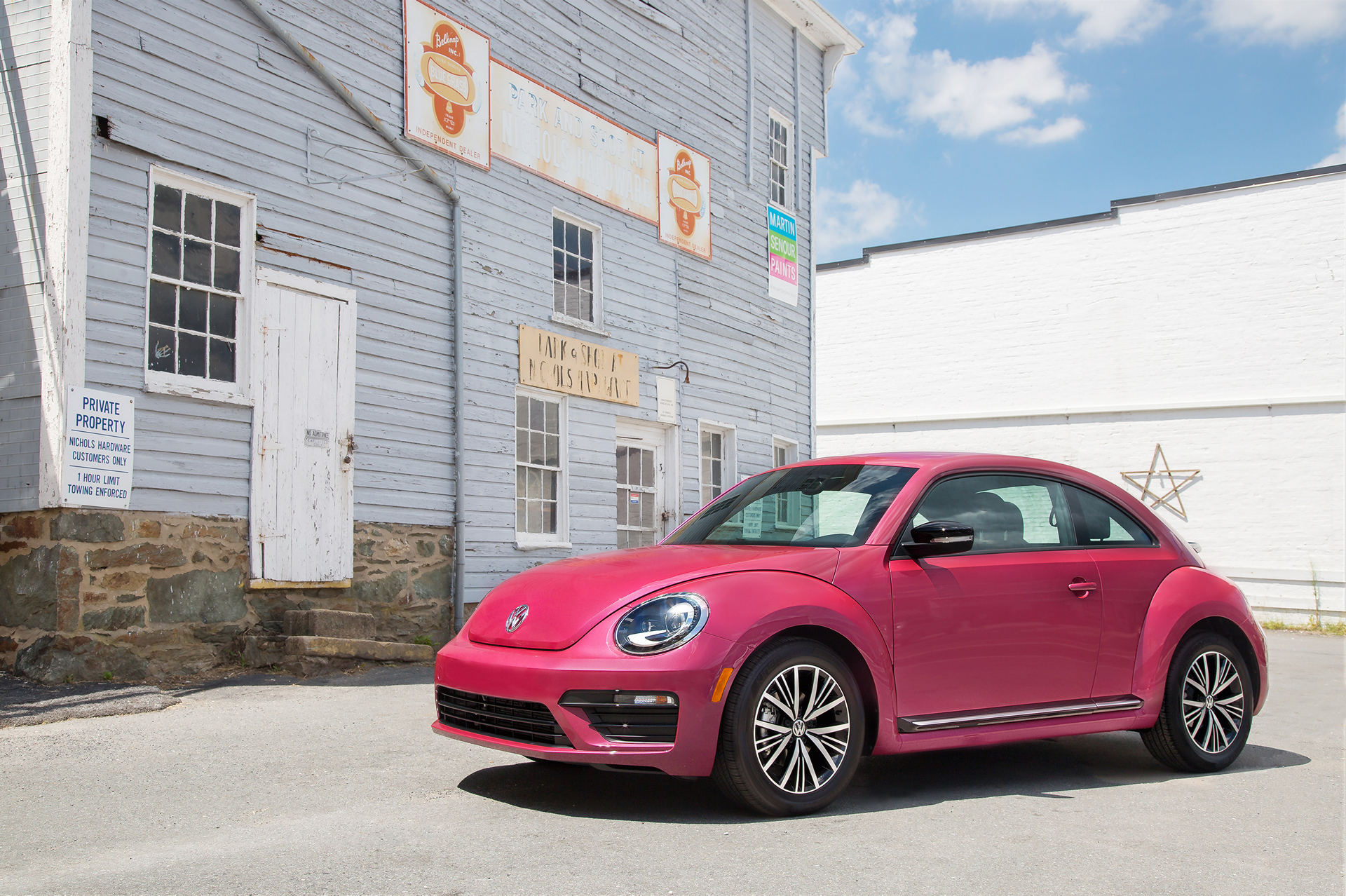 In total, 21.5 million cars were sold, making it the most popular car manufactured off a single platform of all time. Now, even after more than 60 years of being sold in America, the Beetle still rekindles the spirit and imagination of the original for a new generation of Volkswagen owners. 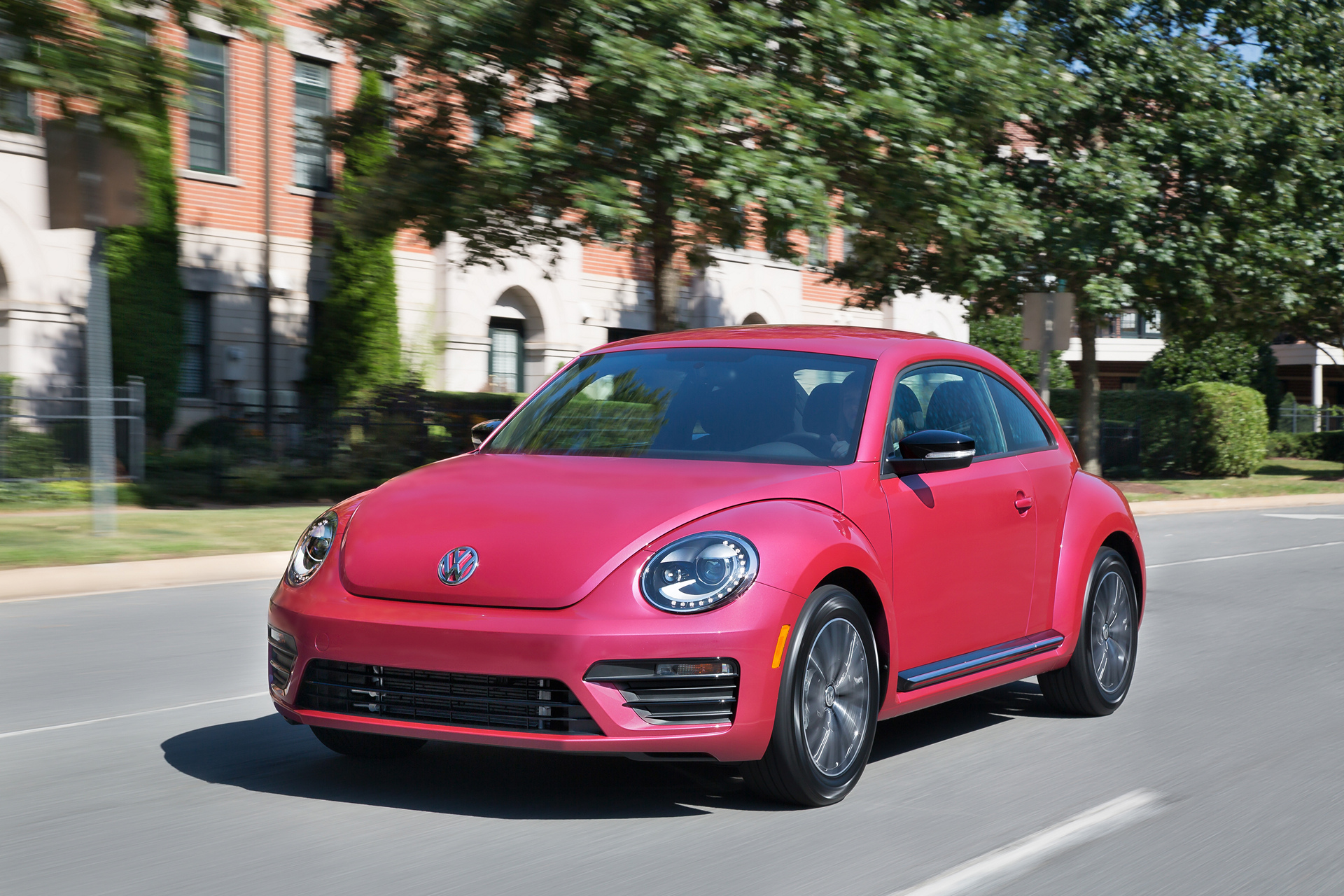 The 2017 #PinkBeetle will be offered in limited quantities across the United States. With a 1.8-liter turbocharged and direct-injection TSI® engine and a six-speed automatic transmission, #PinkBeetle produces 170 horsepower and 184 pound-feet of torque, and is poised to become an immediate automotive trending topic.

Interior design features of the #PinkBeetle include a black dashpad with surrounding pink accent and a leather-wrapped multifunction steering wheel. The pink “Club” cloth seats are reminiscent of the signature plaid inserts of the GTI, replacing the classic design’s red striping with a perfectly-matched pink hue. Standard equipment includes Volkswagen’s MIB II infotainment system, which serves as the foundation for the Volkswagen Car-Net® suite of features. USB and Bluetooth® connectivity for compatible devices is standard, along with a rearview camera and a 3-month trial of SiriusXM® Satellite Radio. Other standard equipment includes heatable front seats and KESSY® keyless access with push-button start.

All 1.8T Beetle models receive new, more aggressive front and rear bumpers, with chrome accents on higher trims. Also, this is the first full year for the 1.8T Dune trim, which offers a rugged addition to the rest of the Beetle lineup, and draws its inspiration from classic Baja Bugs. 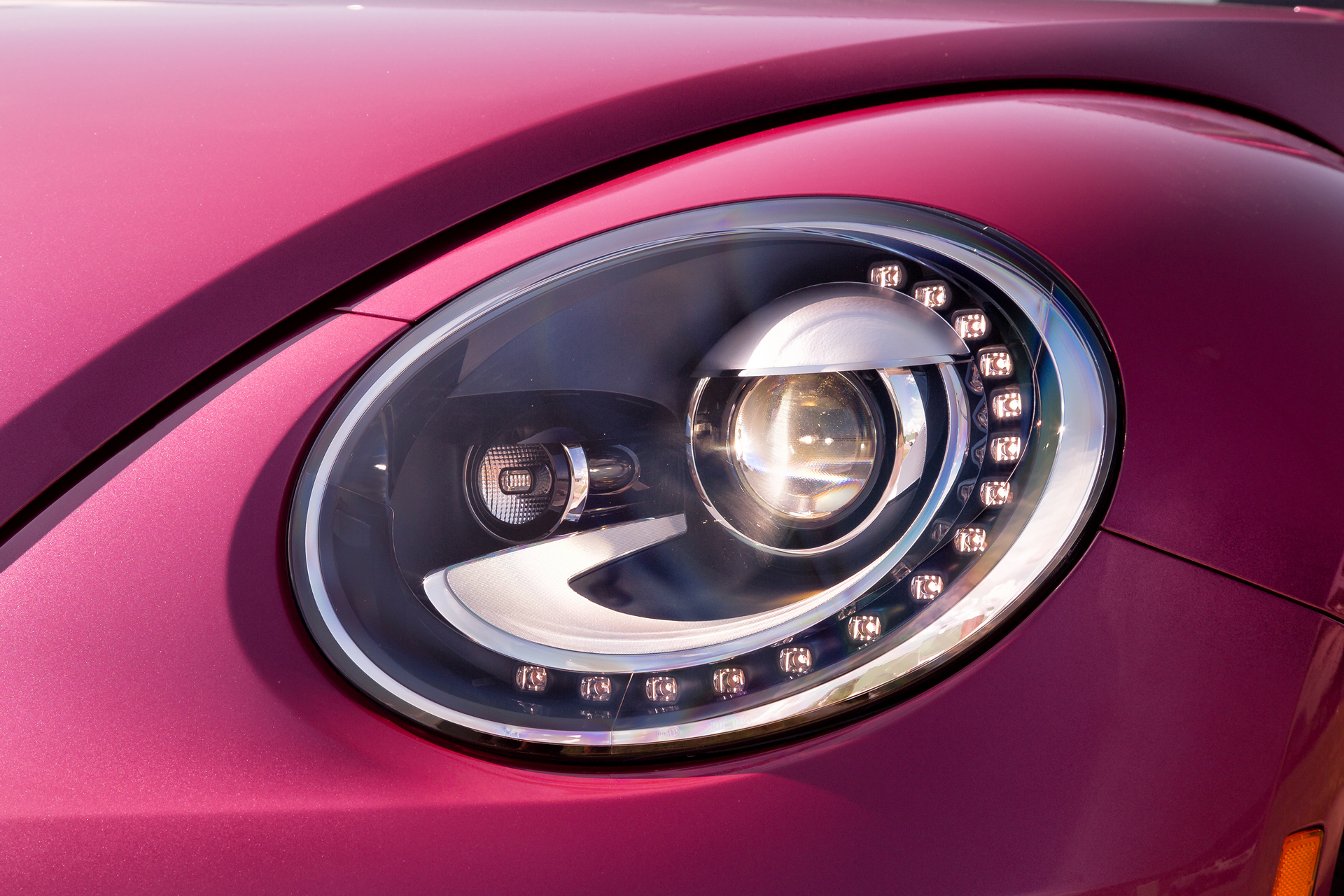 Placing the original Beetle and the latest car next to one another, it’s clear that the lines of the rear sections are nearly identical, but the overall look is bolder and more dynamic. The Beetle also breaks free of the design geometry defined by three semi-circles—front fender, rear fender, and domed roof above it. The roof profile runs distinctly lower and the result is that today’s Beetle is bolder than any of its predecessors. 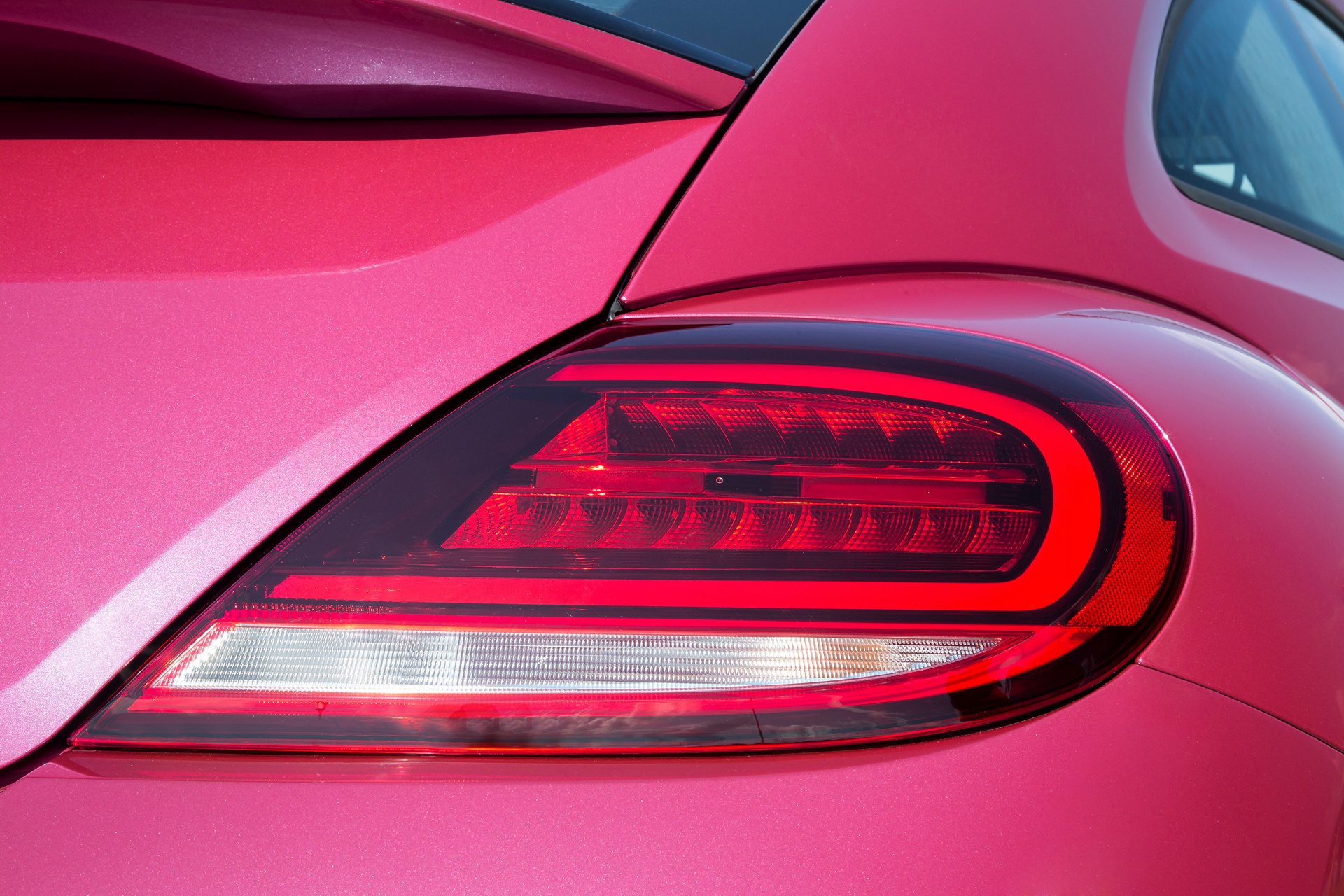 The regular Beetle is 71.2 inches wide, 58.5 inches tall, and 168.4 inches long. The development team also increased the car’s track widths and wheelbase compared with the New Beetle. The changed proportions give the latest Beetle a powerful and dynamic appearance.

The Beetle 1.8T Dune is inspired by classic Baja Bugs and offers a rugged addition to the rest of the model lineup. Overall, the Dune has a bolder appearance in the Beetle range, thanks to the fitment of new front and rear fascias and pronounced black wheelarch extensions that flow into the bumpers. Additionally, the Dune’s raised ride height of 0.4 inches and a 0.6-inch wider body give it a more rugged stance. 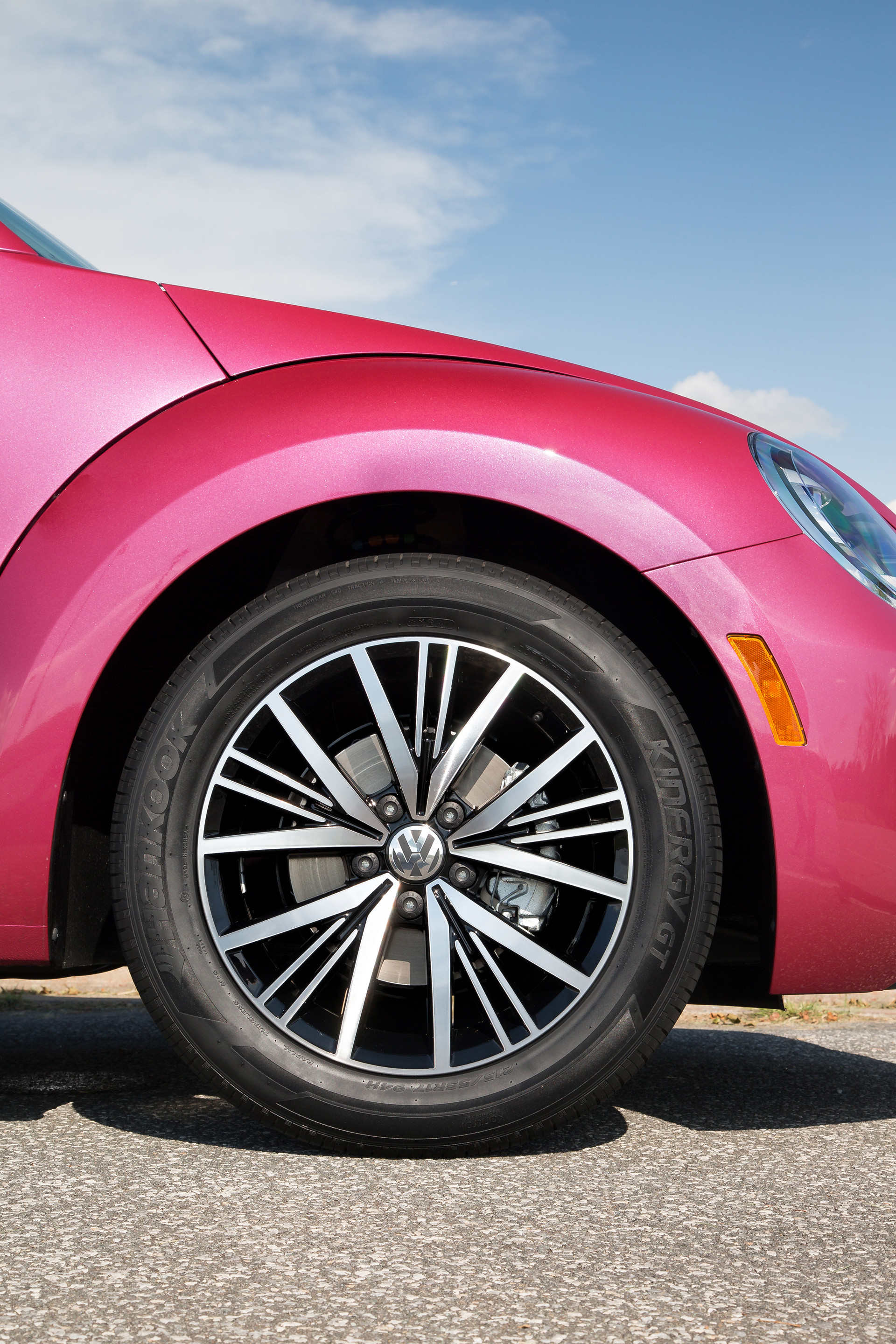 Highlighting the front end’s new look, the bumper features a large central air intake that widens towards its bottom edge, and a black honeycomb screen has an aluminum-look surround that morphs into the underside of the bumper. On either side of the intake, two black honeycomb vents contain the foglights. A Lighting Package is available, which adds Bi-Xenon headlights with LED Daytime Running Lights and LED rear license plate lighting. 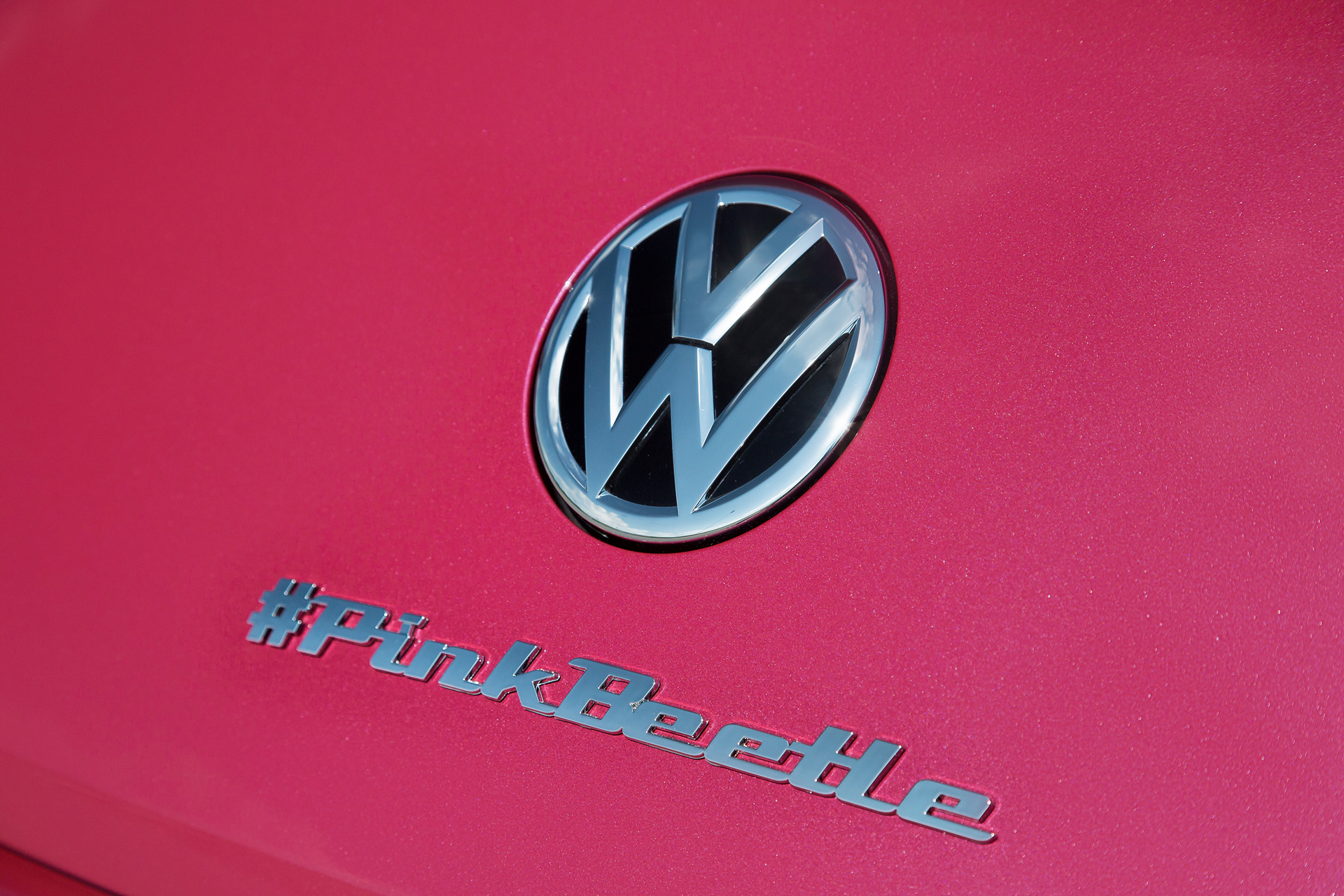 The side of the vehicle is characterized by the contrast between the polished aluminum sills and black trim strips that are reminiscent of the original Beetle running boards. Distinctive 18-inch Canyon aluminum-alloy wheels are fitted with 235/45 all-season tires. The side mirrors have contrasting black lower portions and Reflex Silver uppers, and “Dune” graphics are displayed on both doors. At the back, the Dune features a large rear spoiler, standard LED taillights, and a new bumper design that integrates matte black and aluminum elements. 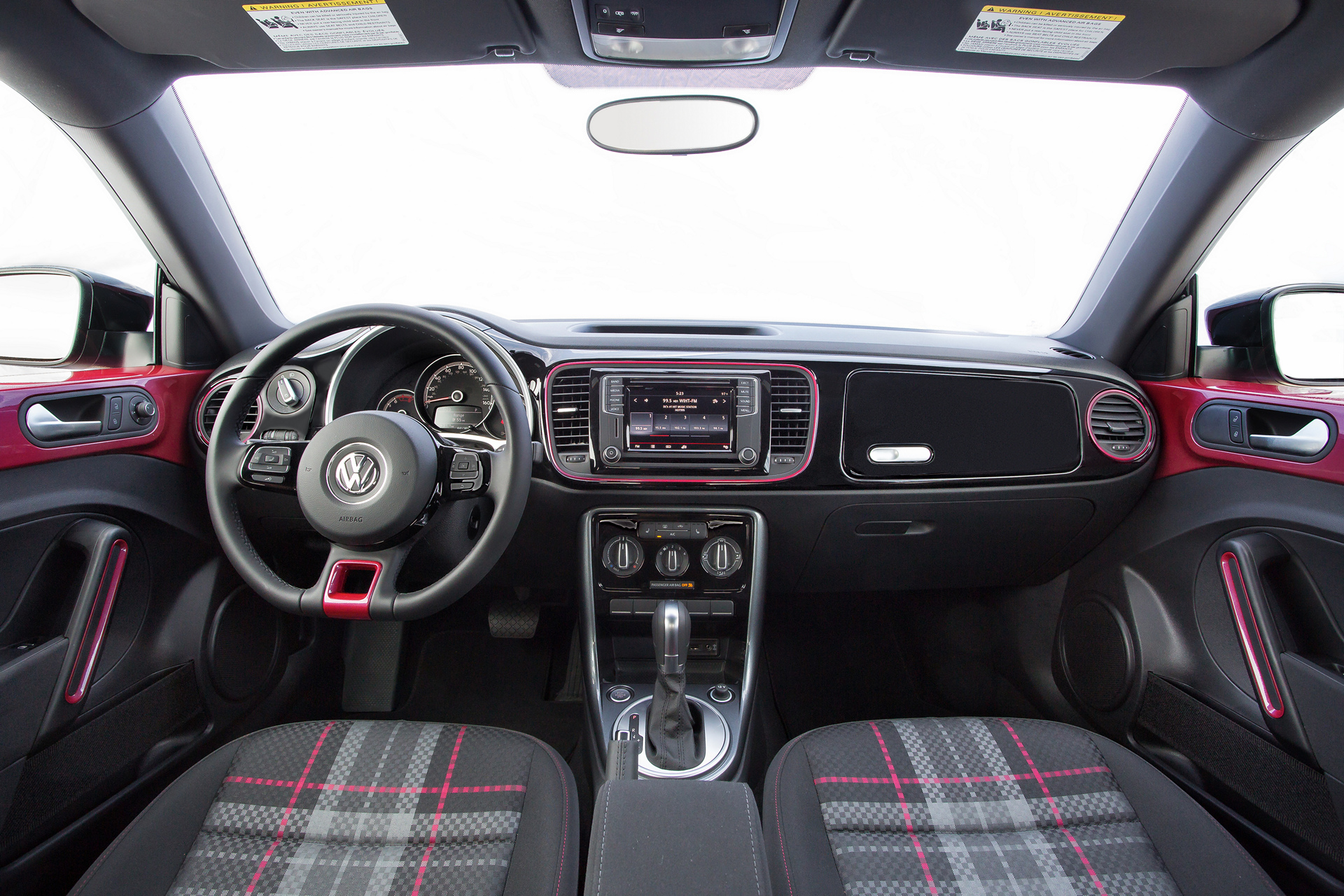 Similar to the original Beetle, the current model has an extra glovebox integrated into the dashboard on the #PinkBeetle trimline and above—the kaeferfach or “Beetle bin.” The lid folds upward, while the standard glovebox opens downward. Standard features on the Beetle include a rear spoiler; rearview camera; power windows with one-touch up/down; and a leather-wrapped multifunction steering wheel, shift knob, and brake lever. 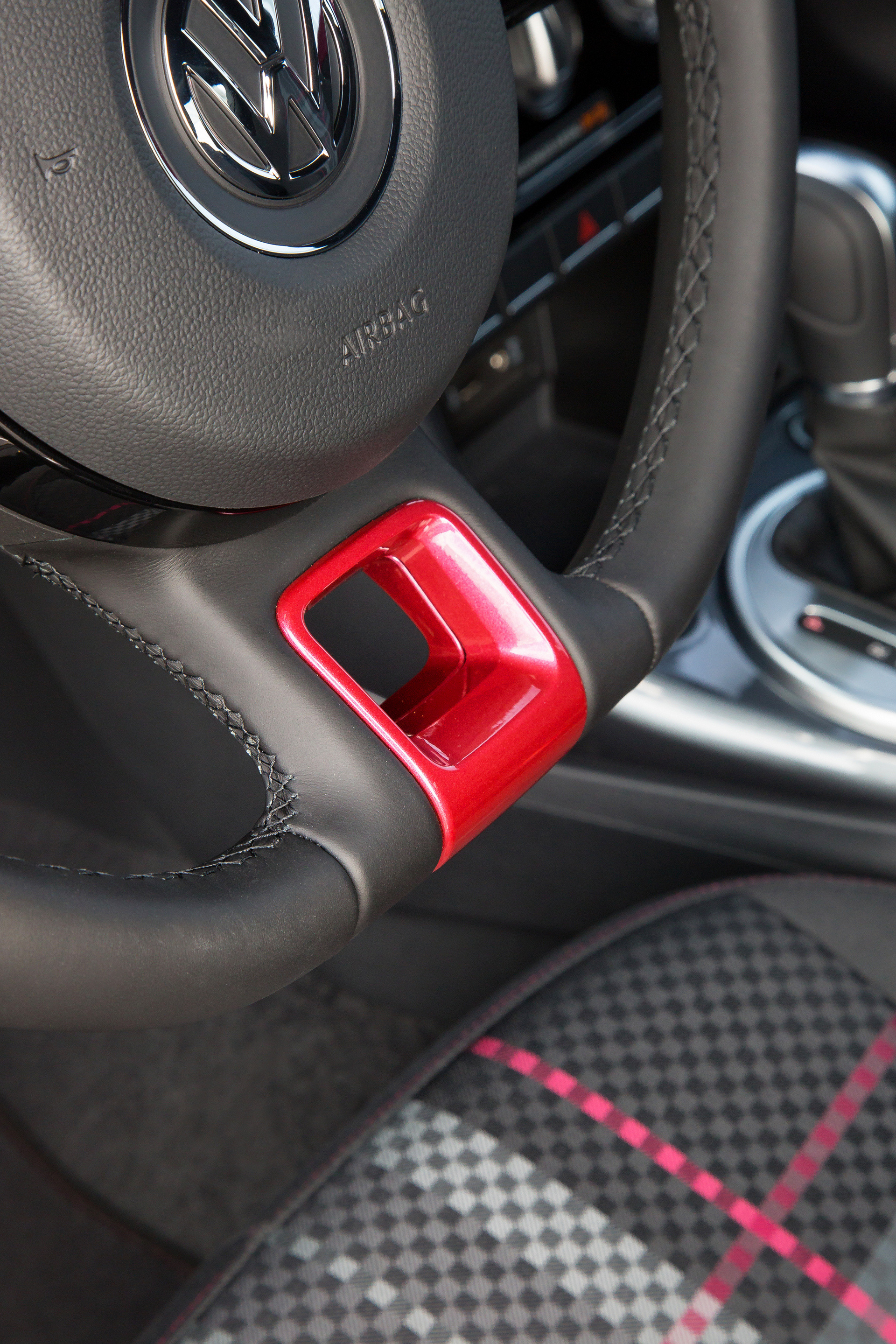 Front and rear passenger headroom is plentiful. The car has 37.1 inches of rear-seat headroom, 41.3 inches of front legroom, and 55.3 inches of front shoulder room. The overall interior volume is 85 cubic feet. The trunk offers 15.4 cubic feet of space: with the seats folded, the capacity increases to 29.9 cubic feet. A split-folding rear seat and a wide opening trunk lid help ease loading and unloading.

One of the most technologically advanced features in the 2017 Beetle comes in the form of its MIB II touchscreen infotainment system. 1.8T S models feature a Composition Color touchscreen radio with a 5.0-inch resistive 400×240 color display and a host of standard features including AUX-in, SD card slot, and a USB multimedia interface with Apple iPhone® and iPod® compatibility, reverse camera display, and Bluetooth® technology for compatible devices. 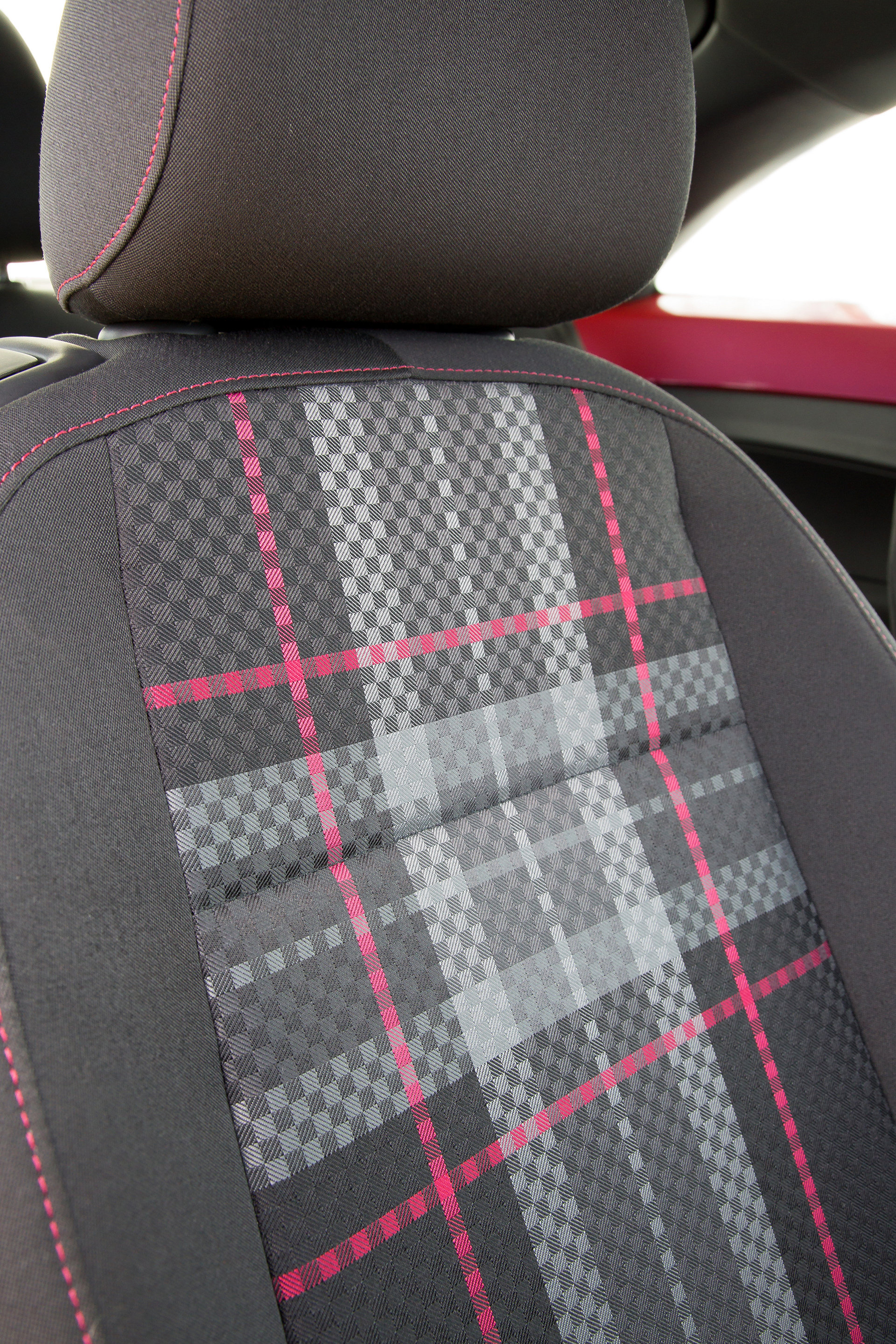 The infotainment system offers one of the most comprehensive suites of connected vehicle services and features available in the automotive industry today. Features available through Car-Net are divided into three key areas, “App-Connect,” “Security & Service,” and “Guide & Inform.” 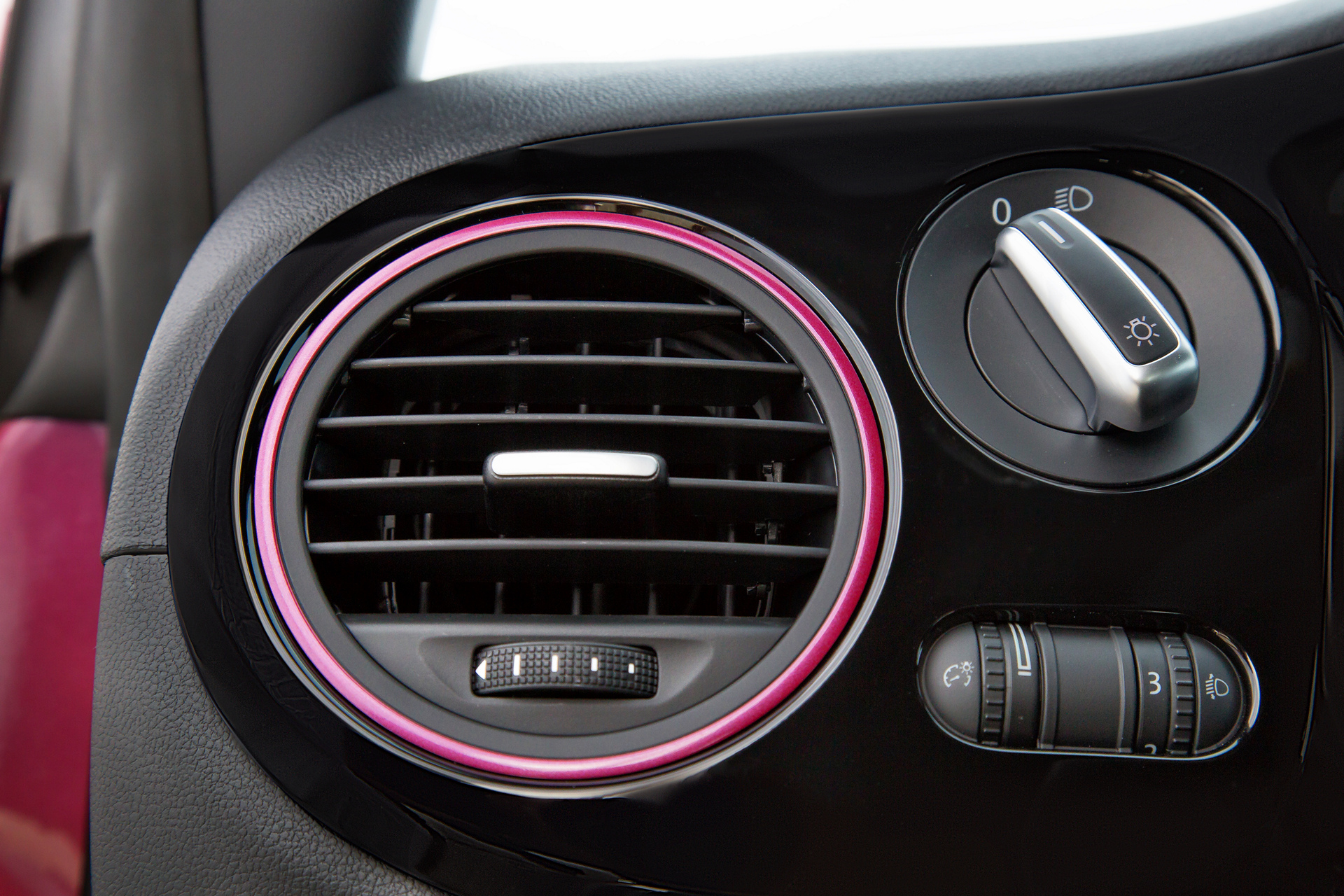 Security & Service. With the Car-Net Security & Service suite, owners can access their VW remotely through vw.com/carnet as well as a smartphone app, providing access to the features available from virtually anywhere your mobile device is connected to wireless internet. 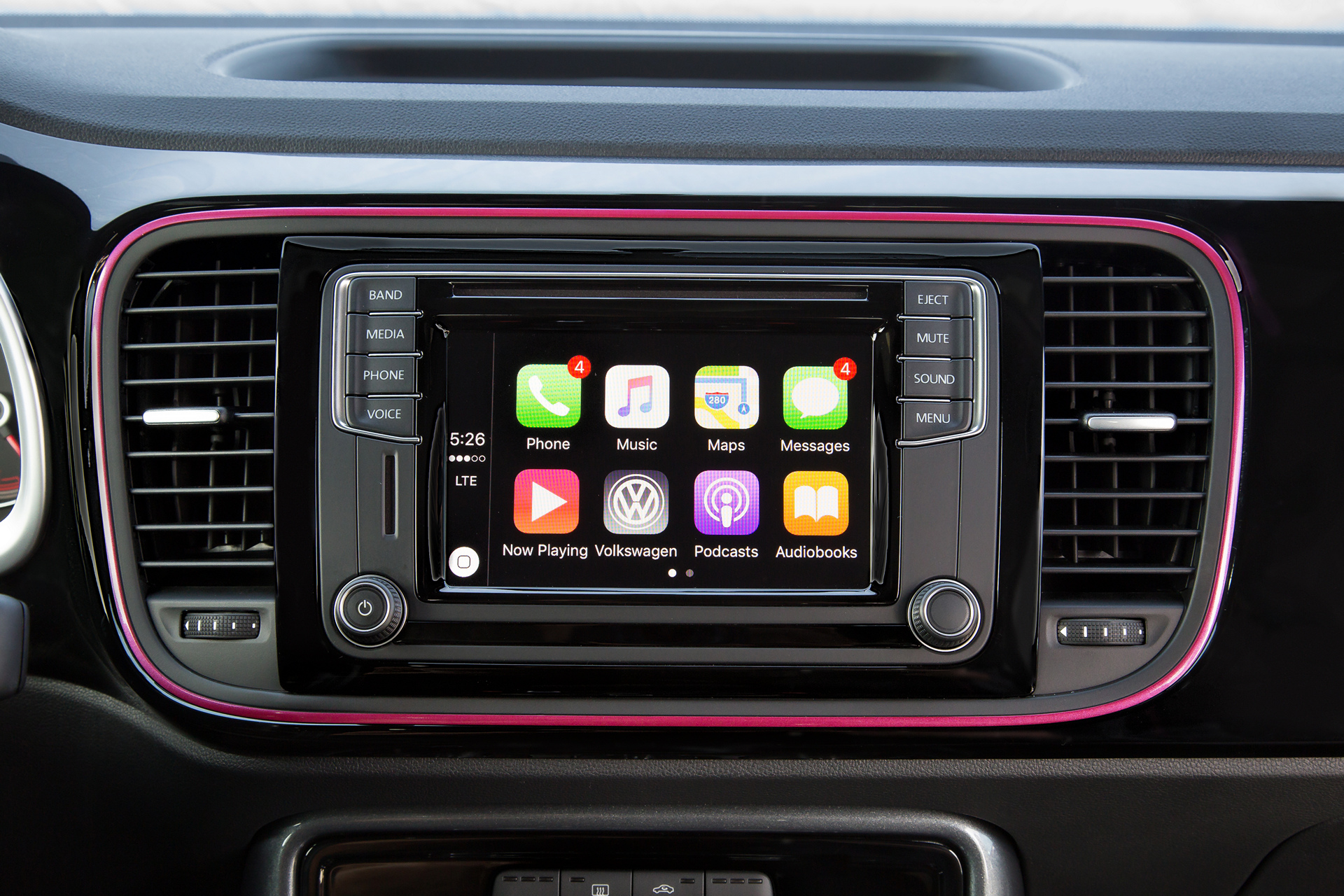 Available security related features include Automatic Crash Notification, which can automatically notify an operator who can contact first responders in the event of an collision; Manual Emergency Call, a feature that allows for quick access to customer specialists at the touch of a button; Roadside Assistance, for added peace-of-mind in the event of trouble on the road; and Stolen Vehicle Location Assistance, which uses VW Car-Net Security & Service to assist law enforcement with locating your vehicle in the event that it is stolen. 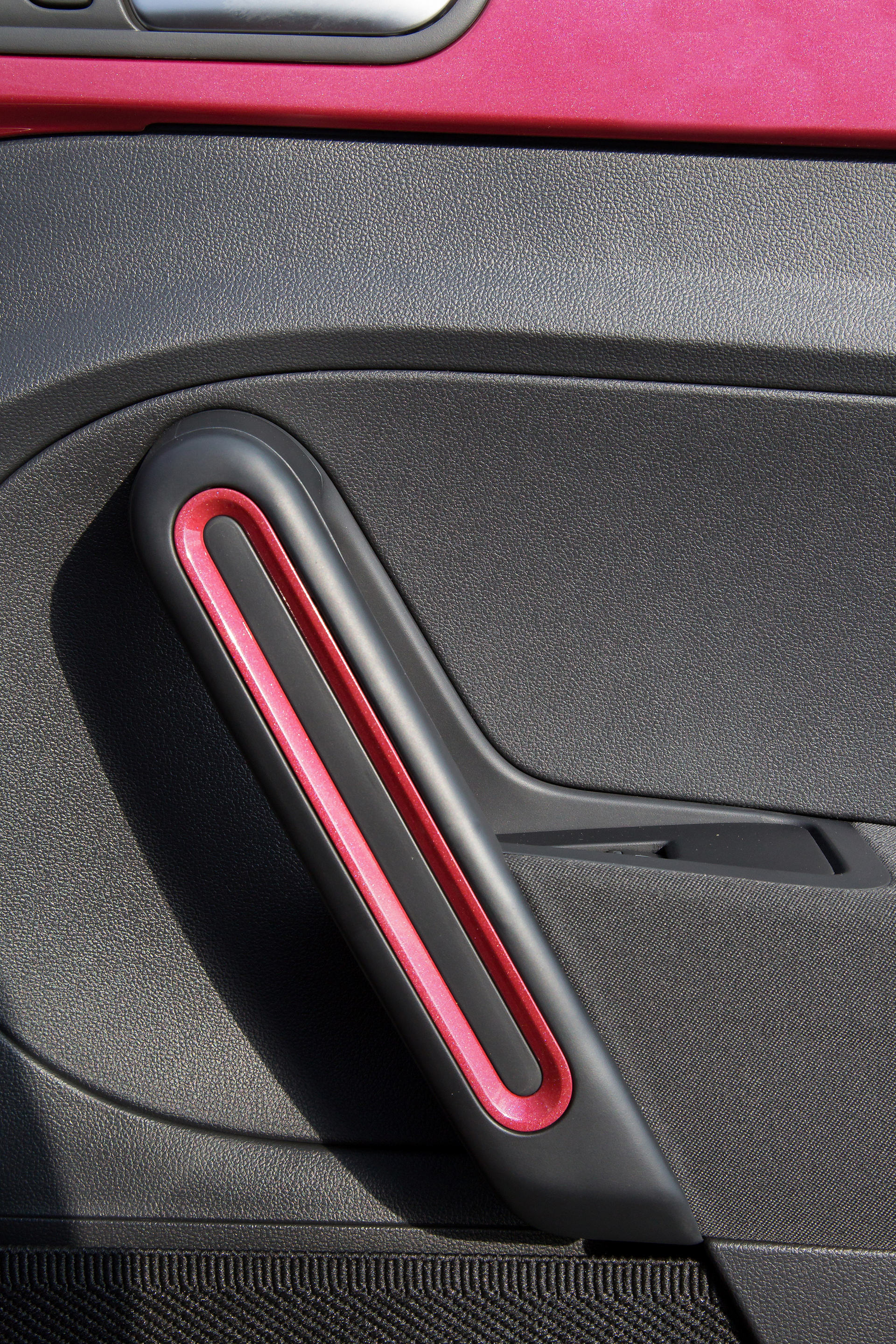 The Car-Net Security & Service also offers Family Guardian, a suite of features that help families. Features including speed alert, which can notify the owner of the vehicle when the preset maximum speed limit is exceeded; and boundary alert, which can alert you if the vehicle has traveled outside of a pre-set virtual boundary.

Diagnostics and maintenance information is also available through VW Car-Net. A Vehicle Health Report allows Volkswagen customers to check to see an overview of vehicle diagnostics. When it’s time for scheduled service, Car-Net Security & Service can not only alert the customer, but also provide a simple way to schedule a dealer visit. It can even identify the closest dealer in case you need a recommendation. 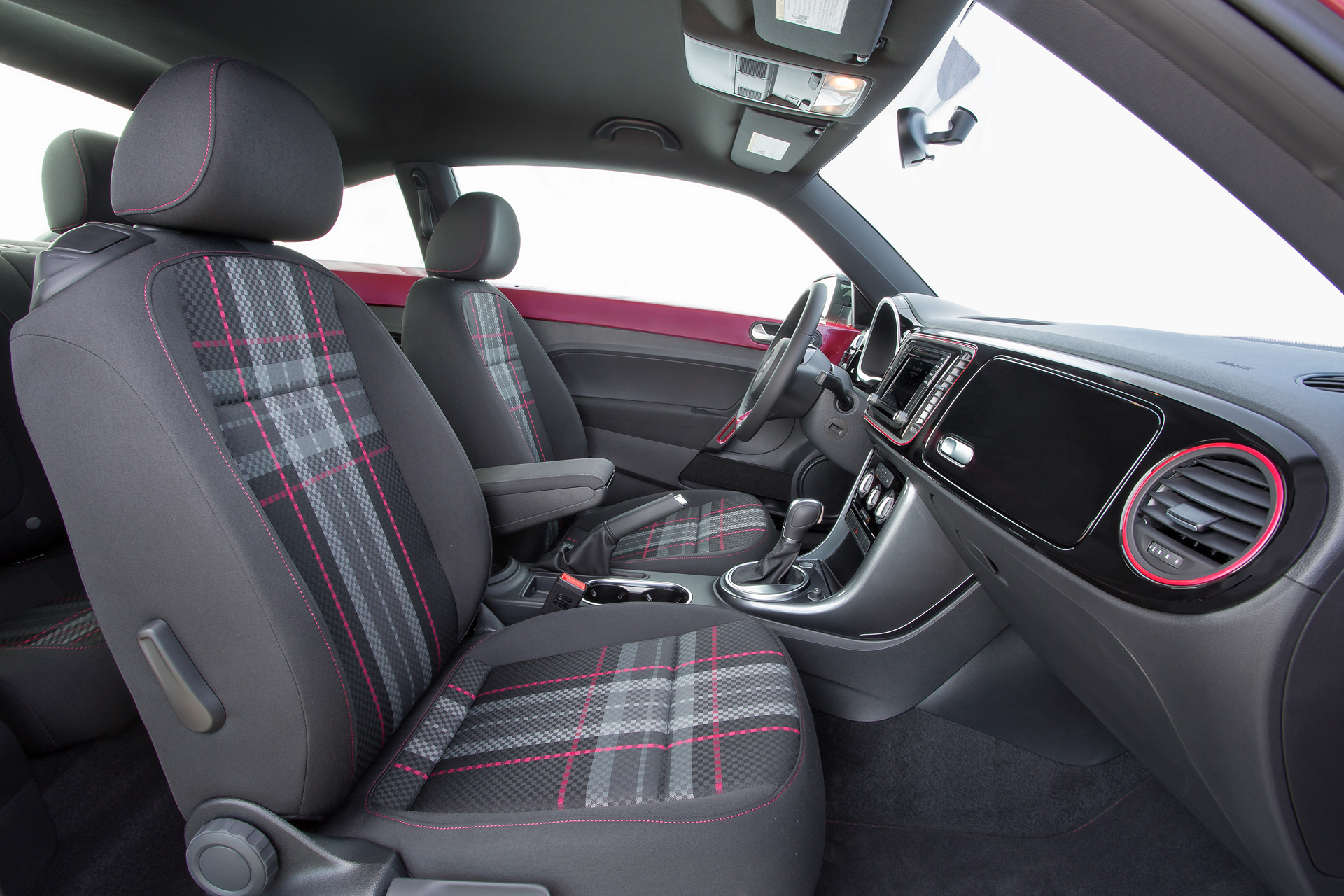 Customers purchasing new Volkswagen models equipped with Volkswagen Car-Net Security & Service connected vehicle services (not including App-Connect) will receive a no-charge trial for six months after purchase. To extend the benefits of this connectivity system, customers can choose from a number of Volkswagen Car-Net payment options: 1 year, for $199; 2 years for $378; 3 years for $540; or, month-to-month, for $17.99. 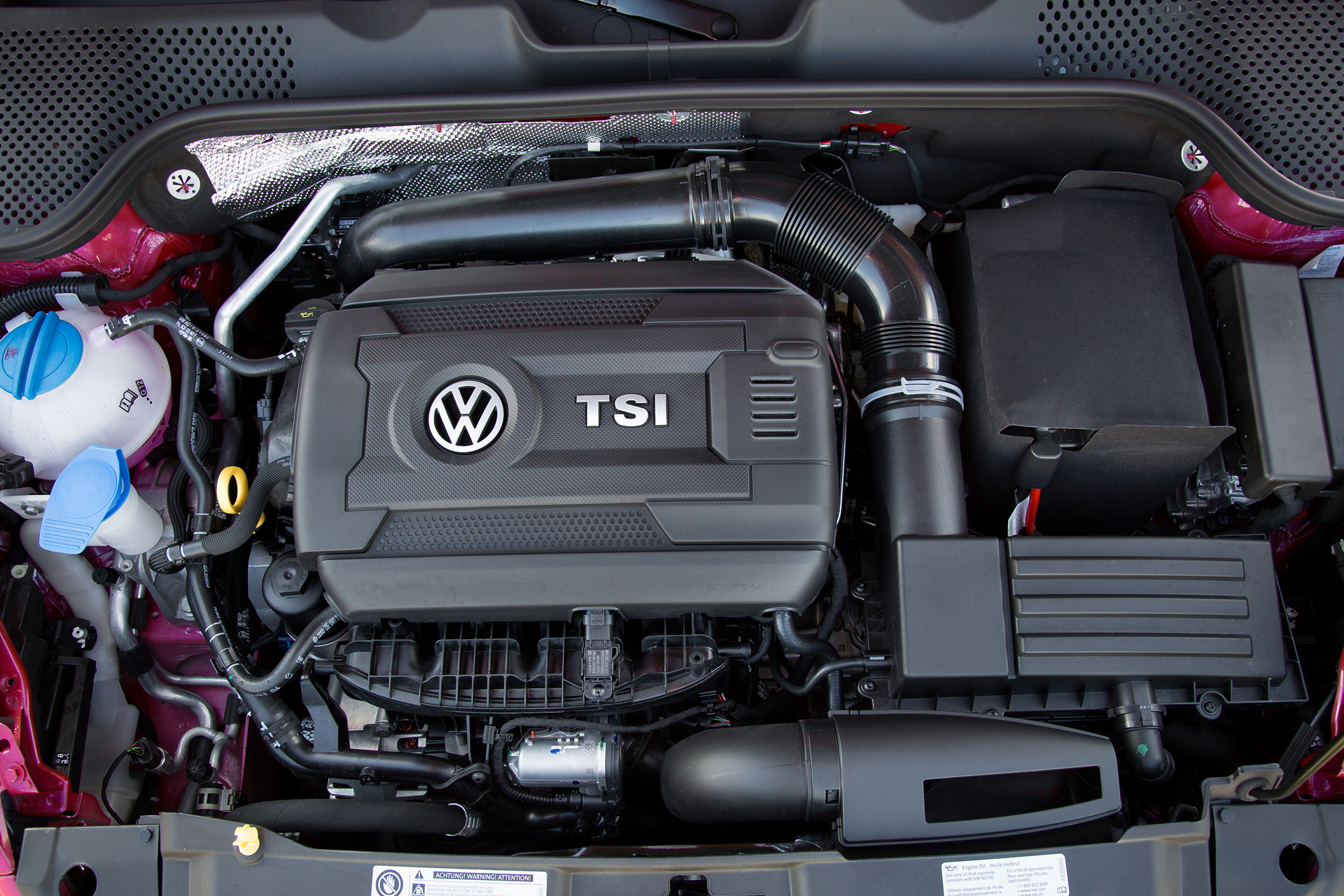 The DSG dual-clutch transmission combines the comfort and ease-of-use of an automatic with the responsiveness and economy of a manual. The six-speed, transversely-mounted DSG unit features two wet clutches with hydraulic pressure regulation. One clutch controls the “odd” gears—first, third, fifth and reverse—while the other operates the even gears.

With DSG, the setup allows the next-higher gear to be engaged but remain on standby until it is actually selected. In other words, if the Beetle is being driven in third gear, fourth is selected but not yet activated. As soon as the ideal shift point is reached, the clutch on the third-gear side opens, the other clutch closes and fourth gear engages under accurate electronic supervision.

Since the opening and closing actions of the two clutches overlap, a smoother gearshift results and the entire shift process is completed in less than four-hundredths of a second. In addition to its fully automatic shift mode, DSG has a Tiptronic® function to permit manual gear selection. 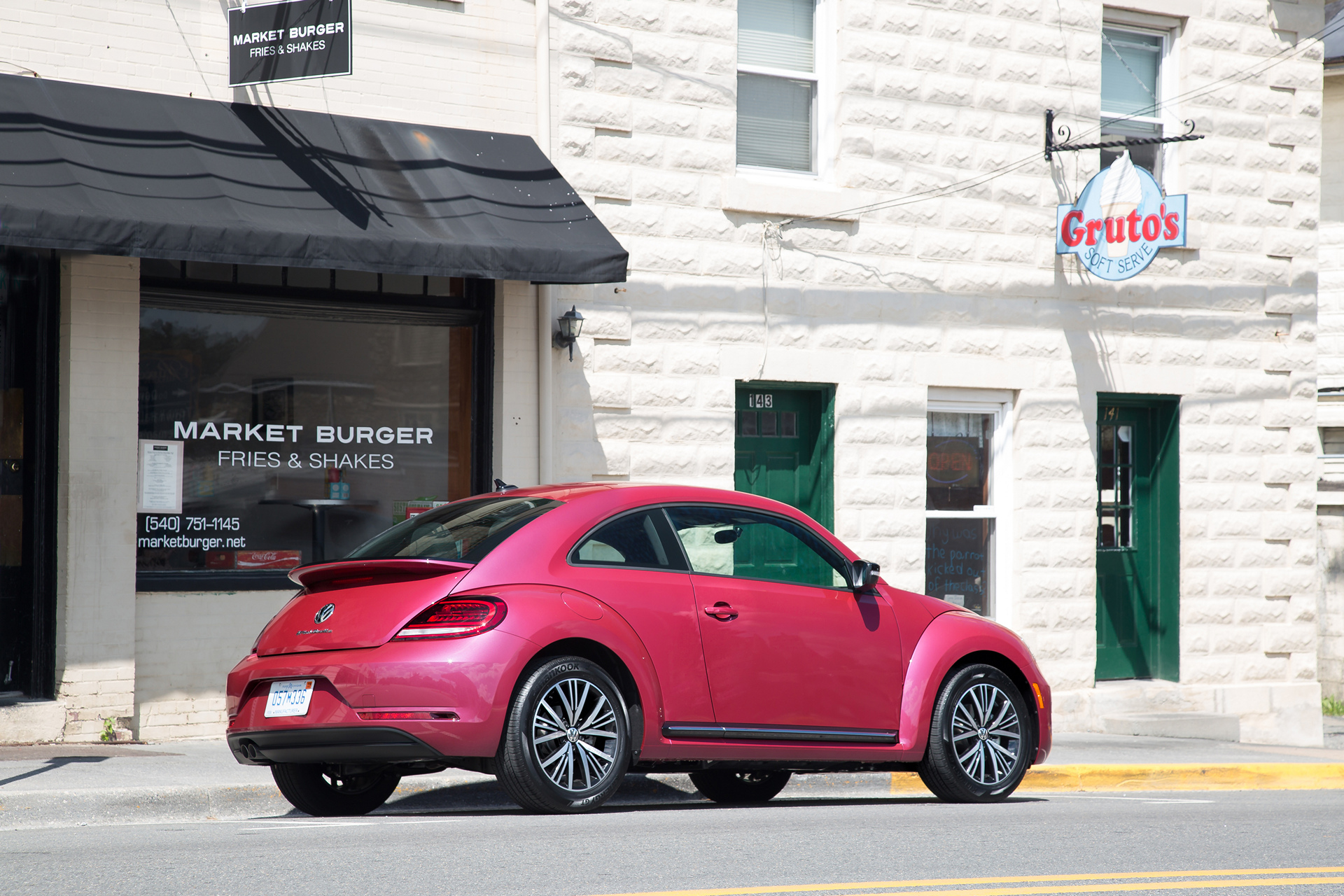 To help ensure that power is applied properly in challenging conditions, the R-Line model features the XDS® cross differential (limited-slip) system that helps electronically monitor input from various wheel sensors and, in the event of slippage, help transfer extra torque to the wheel or wheels with the most traction. 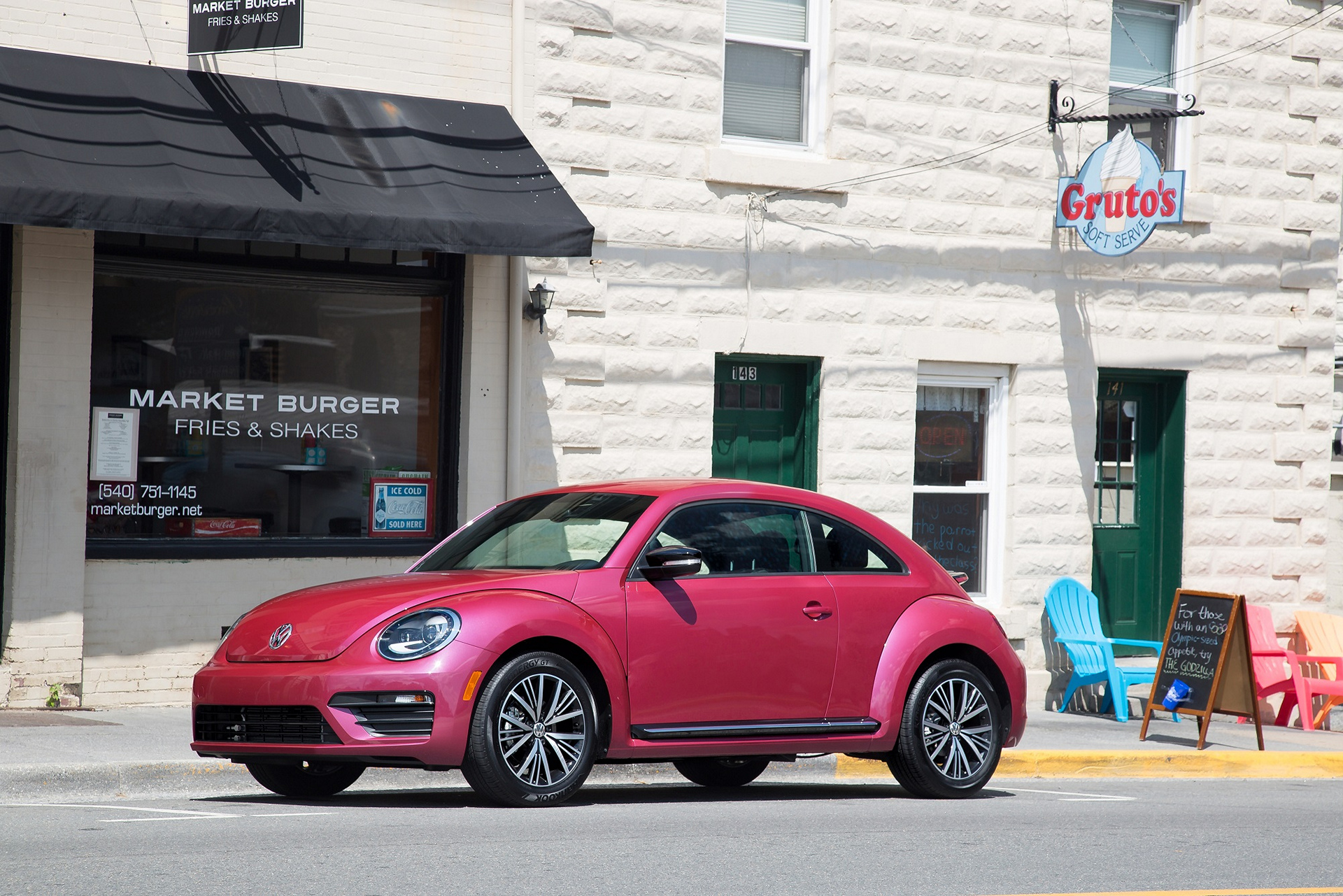 The starting point for safety in a vehicle is a rigid body structure that uses ultra-high-strength, hot-formed steels in the crash-load paths and seamless laser welds. Electronic Stability Control (ESC) is standard. Front and head-thorax side airbags are also among the standard equipment.

The Automatic Post-Collision Braking system is a standard safety feature for model year 2017. This system builds on the premise that a collision is rarely a single, instantaneous action, but rather a series of events that follow the initial impact—the most significant of which can cause additional collisions. The Automatic Post-Collision Braking system helps address this by applying the brakes when a primary collision is detected by the airbag sensors, thus helping reduce residual kinetic energy and, in turn, the chance of additional damage.

The Beetle also includes Volkswagen’s Intelligent Crash Response System that shuts off the fuel pump, unlocks the doors, and switches on the hazard lights if the car is involved in certain types of collisions. 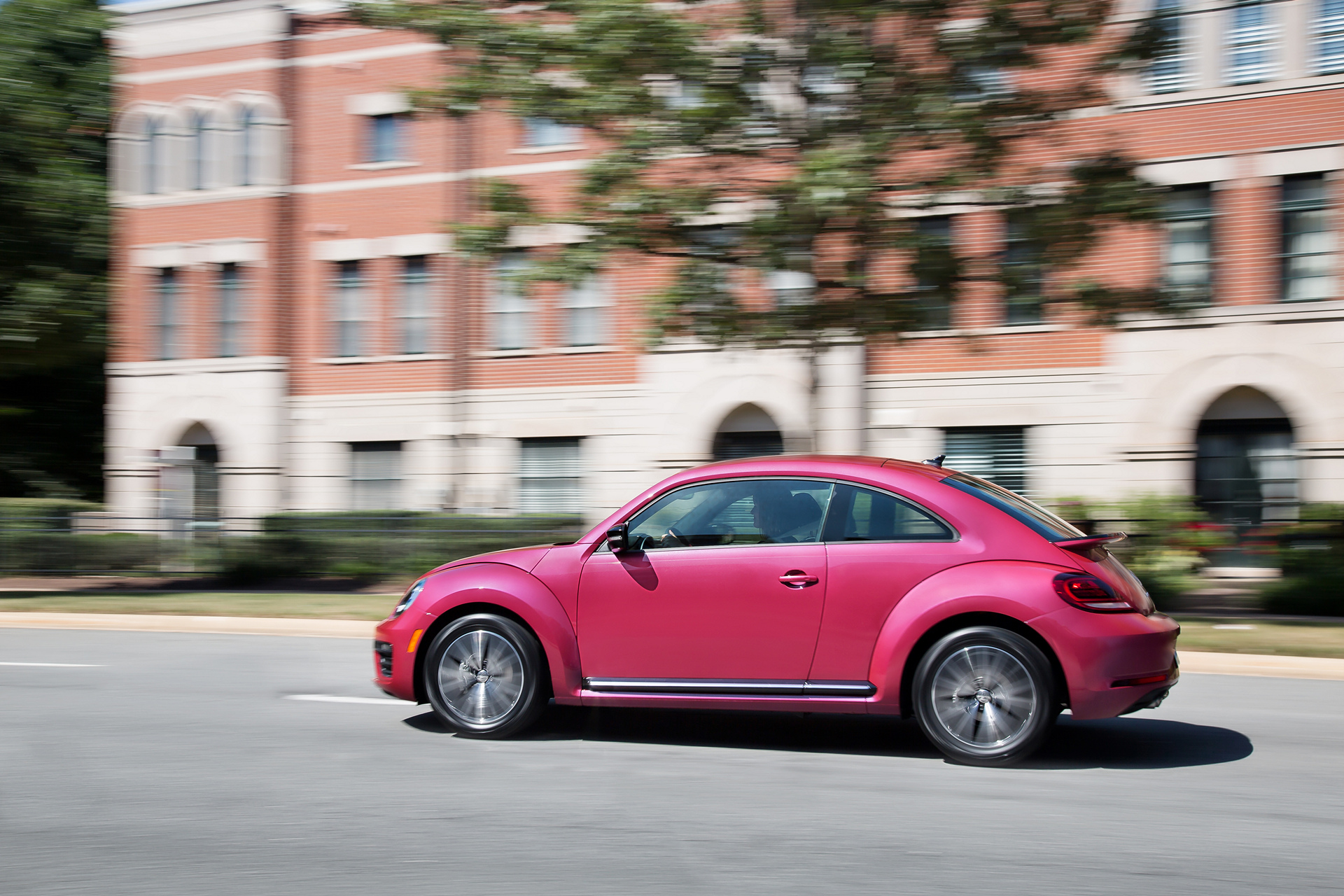 The available Blind Spot Monitor system utilizes a flashing symbol in the outer area of the side mirrors to help indicate the presence of vehicles in the blind spot next to the Beetle. The system uses radar sensors to help monitor a space around the vehicle with a range of approximately 65 feet.

Beetle models that are equipped with Blind Spot Monitor are automatically equipped with the Rear Traffic Alert system as well. This system not only helps alert the driver to stationary and moving vehicles directly behind the Beetle, but also helps detect vehicles approaching from the side that may be difficult for the driver to see. Like the Blind Spot Monitor, it offers a sizable range of 65 feet, and can present an acoustic warning and apply the brakes if a potential impending collision is detected. 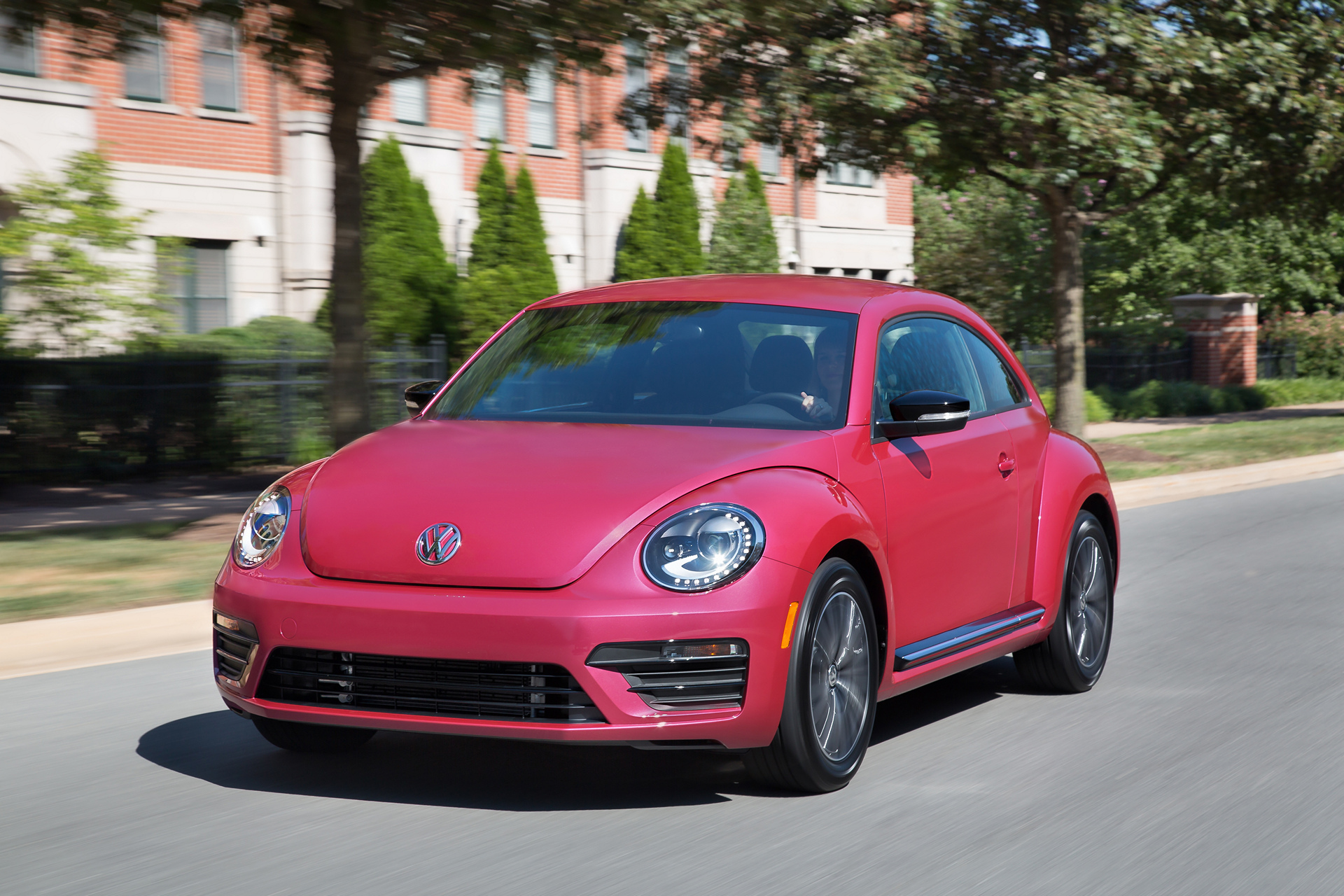 Destination for all Beetles is $820