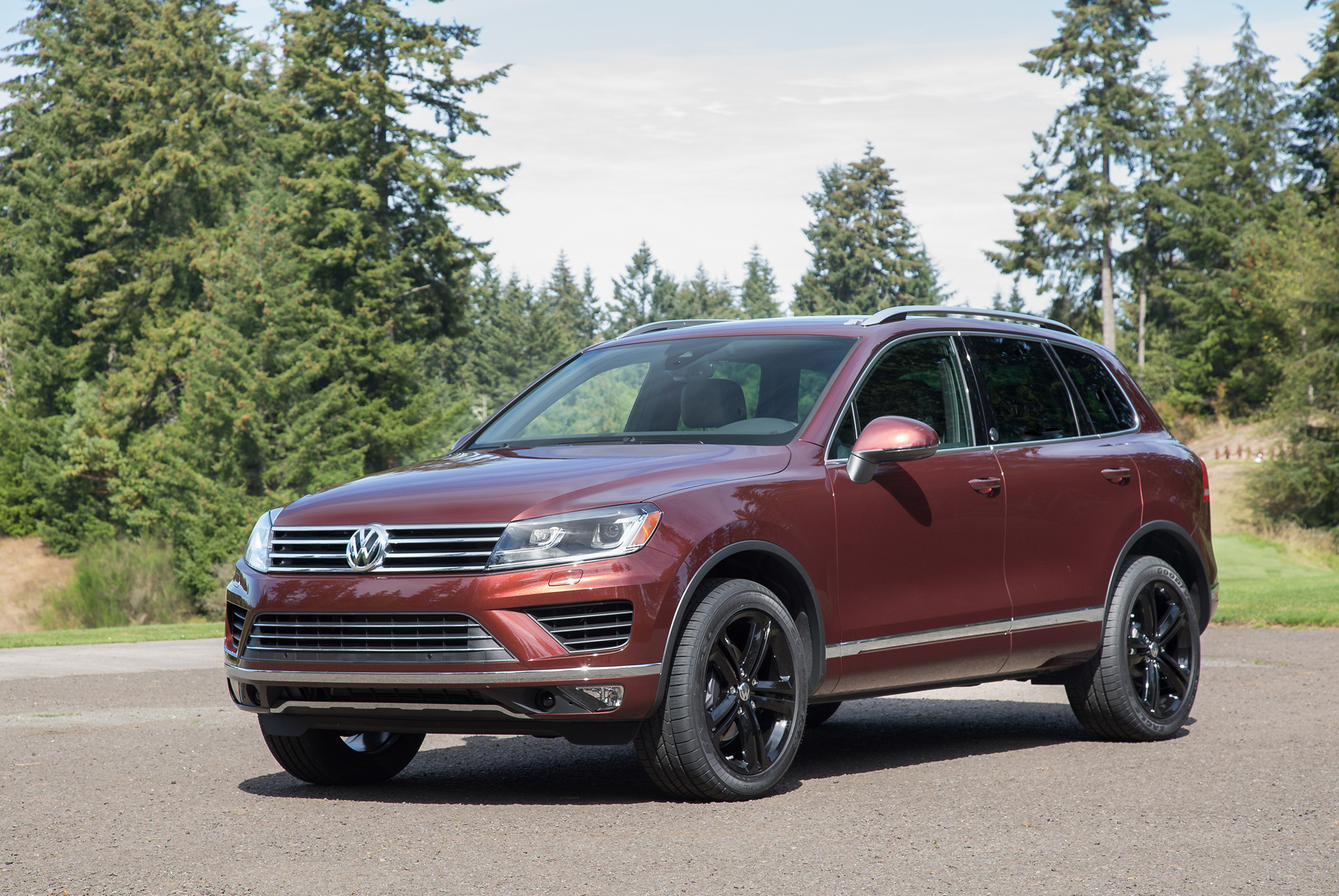 Volkswagen’s flagship SUV is utility made luxurious. The Touareg features high-end interior and exterior design, premium technology and driver assistance systems (including an available Area View camera for the Executive trim), and an efficient and powerful engine. 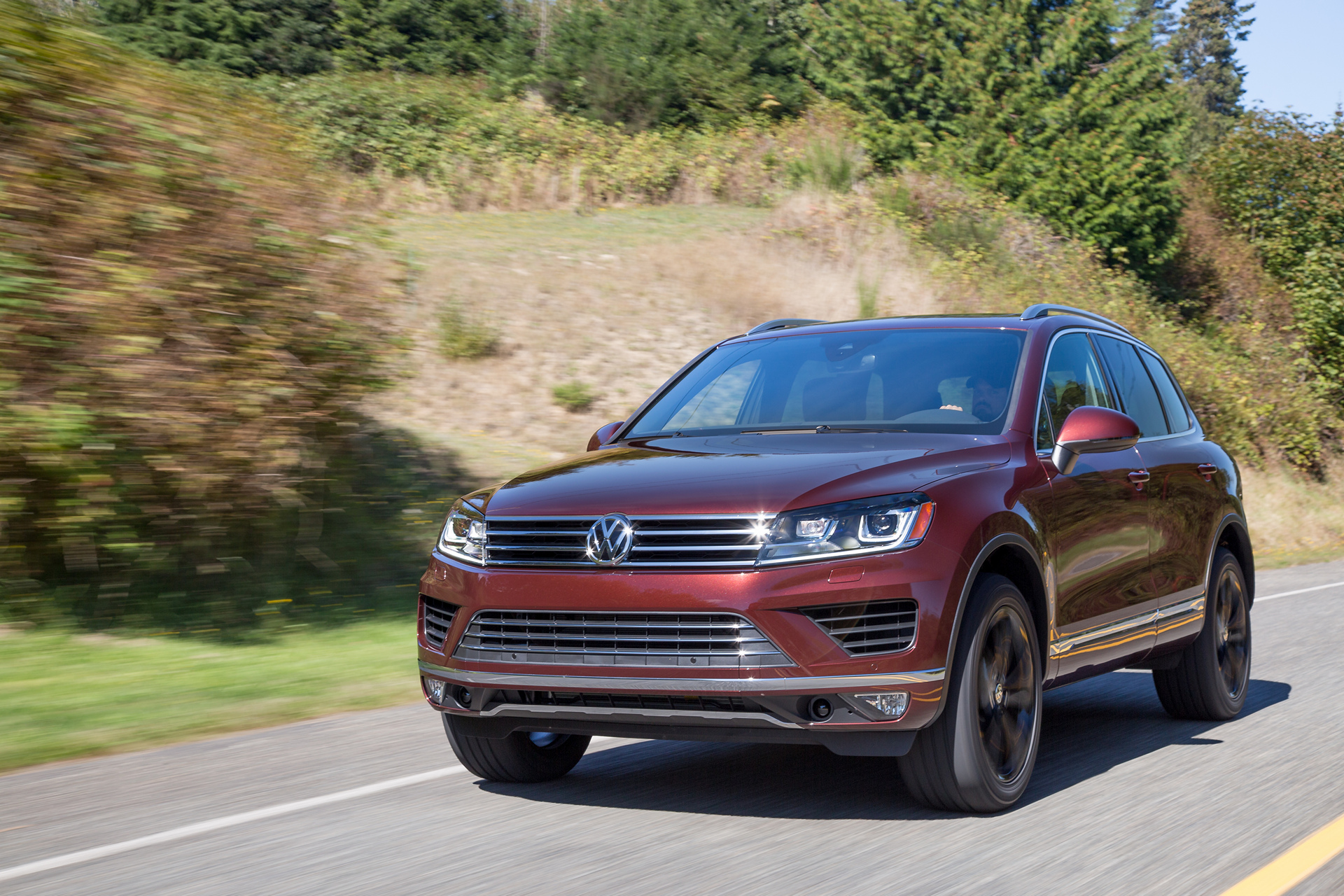 For 2017, the Touareg receives some equipment changes and the Lux trim is replaced by a new, value-oriented Wolfsburg trim. On the Sport with Technology trim, the following are added as standard features: Adaptive Cruise Control (ACC); Forward Collision Warning and Autonomous Emergency Braking (Front Assist); Lane Change Assist (Side Assist); Park Distance Control (Park Pilot); and a heated steering wheel. The Executive model now has standard 21-inch aluminum-alloy wheels and Auto Hold is now standard on all trims.

The Wolfsburg Edition benefits from a number of design enhancements, including: brushed aluminum décor, stainless steel door sills and pedals, black headliner, two-tone Vienna leather seating surfaces, heatable and ventilated front seats, gray door inserts, a Wolfsburg badge, and contrast stitching on the floormats, steering wheel and shifter. The vehicle is also available with an all-black interior. Externally, the vehicle rides on 20-inch “Tarragona” wheels that have a diamond-turned finish, with the option of blacked-out 20-inch “Mallory” wheels. 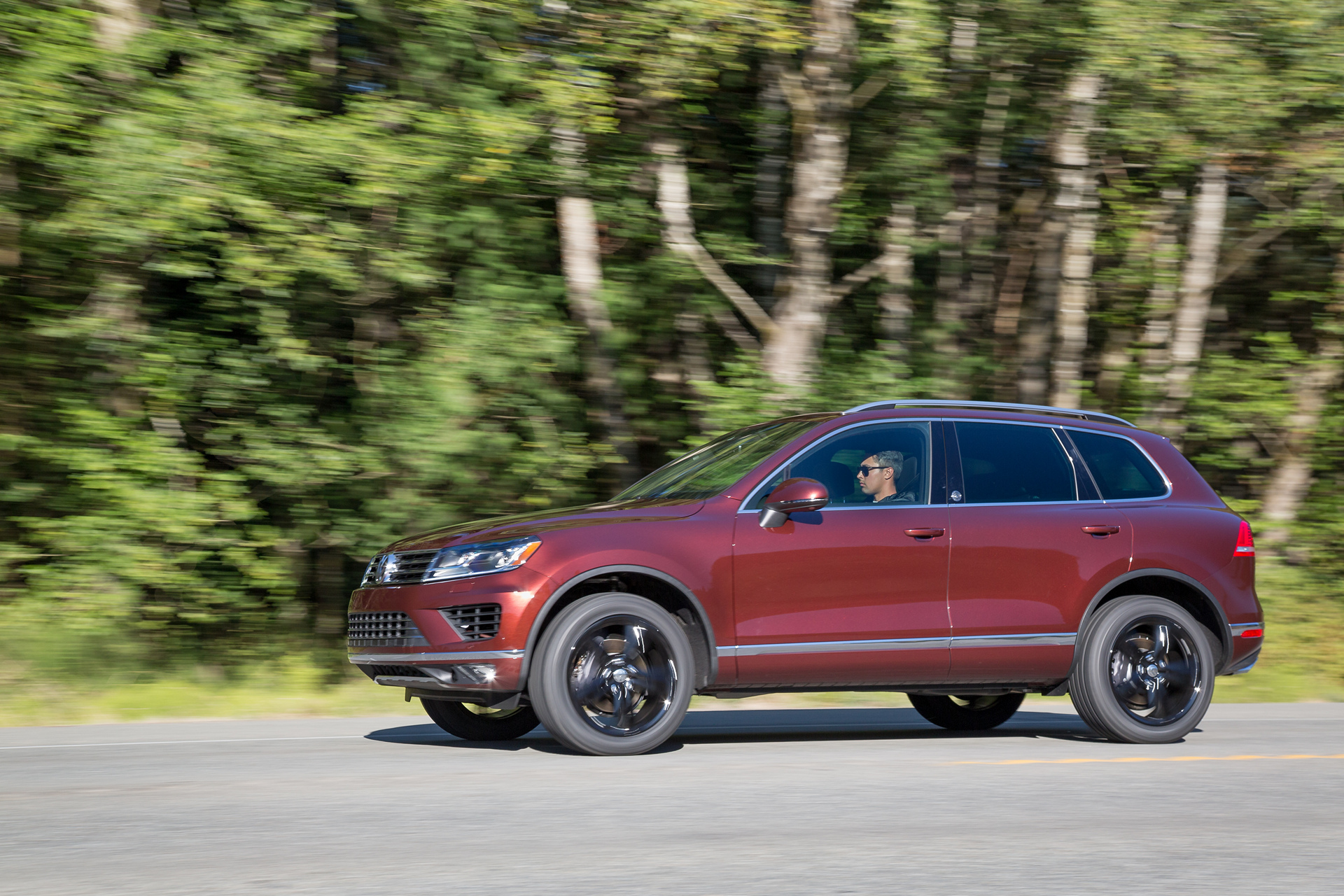 The 2017 Touareg sports a crisp, sleek and aerodynamic look that is firmly set in Volkswagen DNA. The Touareg measures 188.8 inches in length, 76.4 inches wide and 68.2 inches high. Key design elements include a four-bar chrome grille that connects seamlessly to the headlights, which themselves sit flush with the grille’s base. Standard on all models, these headlight clusters feature Bi-Xenon headlights, the Adaptive Front-lighting System, and LED Daytime Running Lights. 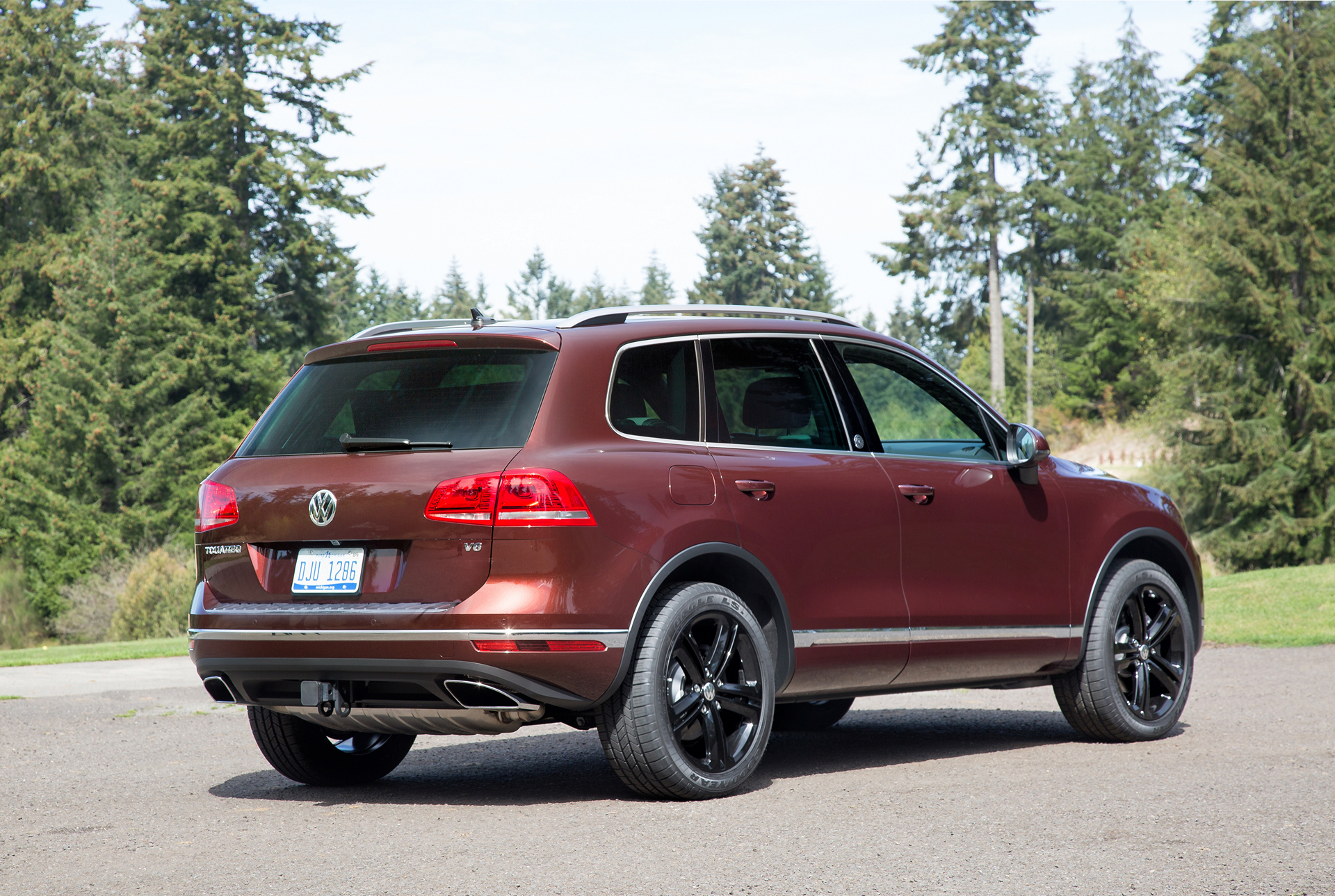 The horizontal theme continues throughout the Touareg’s front end. A lower valance incorporates foglights, and the bumper has an “A” shape, with the connecting pillars leaning inward.

Moving to the back, LED taillights are standard on all 2017 Touareg models. These units flank a tailgate design with an elegantly sharpened “Tornado Line” running across the entire width. The rear bumper features chrome accents that wrap around the Touareg; the lower spoiler features blacked-out trim. Signature triangular exhaust tips round out the overall look.

The 2017 Touareg offers a variety of wheel choices, depending on trim. The 18-inch “Arica” offers a sharply chiseled 10-spoke design, while the 20-inch “Tarragona,” 20-inch “Mallory Black” (optional only on Wolfsburg), and 21-inch “Mallory” are all variants of a doubled five-spoke look. 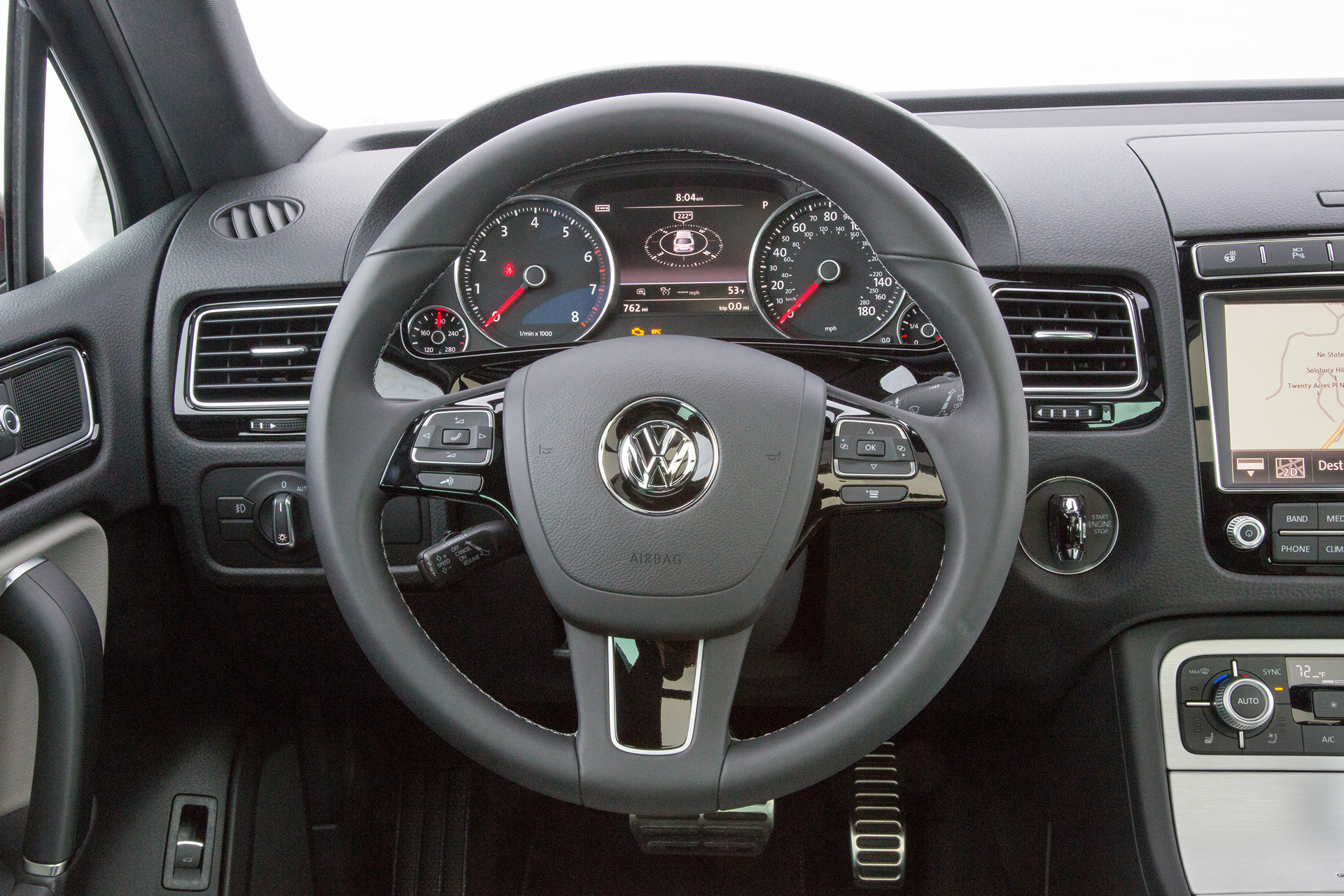 The 2017 Touareg offers a premium modern layout. The cabin is illuminated with white LED overhead lighting, and chrome trim and wood accents lend a clean, luxurious feel throughout. 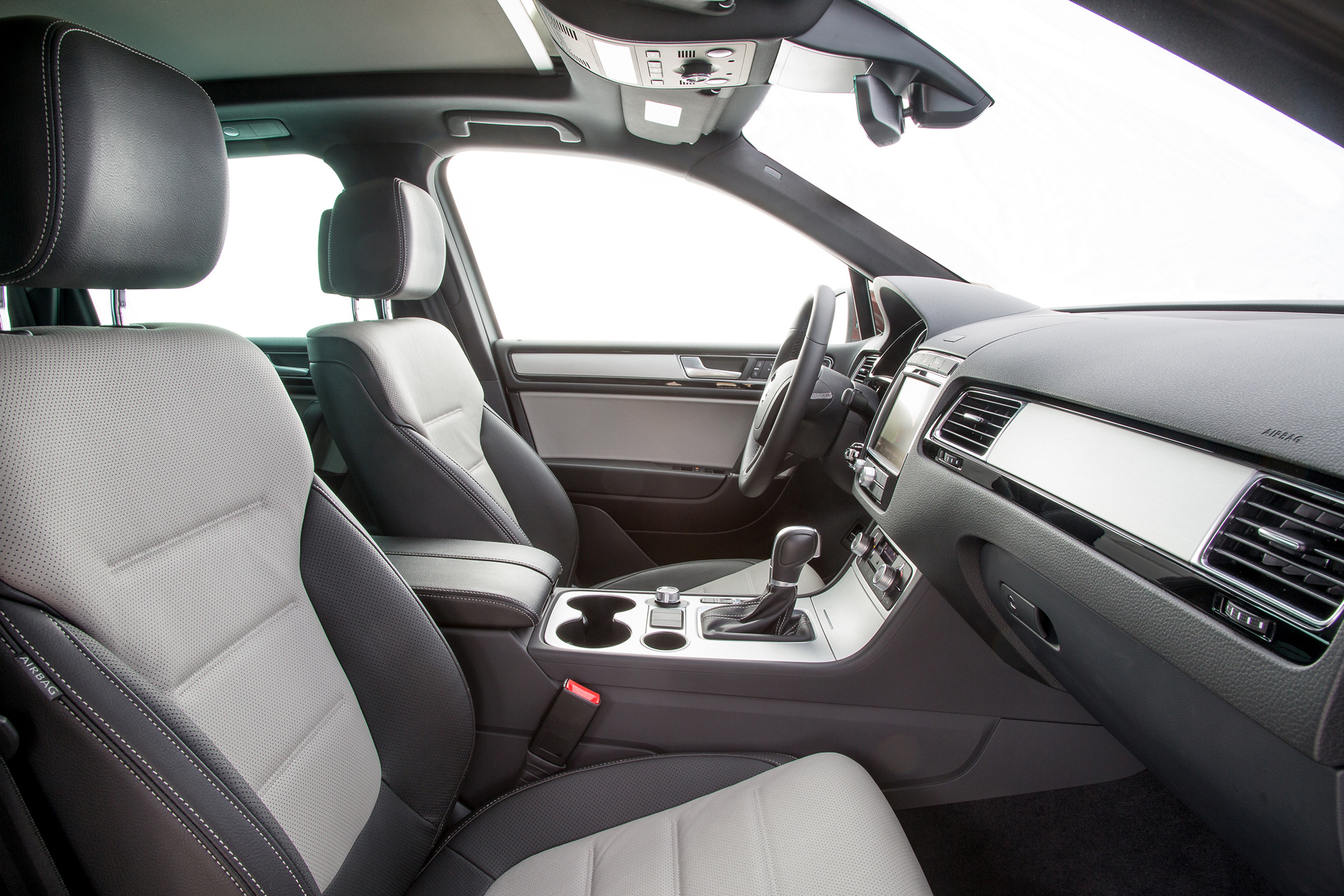 Mounted in the center of the dash is the premium RNS® 850 navigation system. The RNS 850 features an 8-inch touchscreen capable of displaying maps and directions in high-definition 3D graphics, and a DVD/CD player with MP3 playback and HD/AM/FM radio. Music can be stored on the 60GB hard drive (with 18GB reserved for uploaded media); iPod® device, SD card, and DVD drive interfaces can be found in the glovebox. Touareg Executive models come with a 620-watt Dynaudio® sound system with 10 premium speakers (four tweeters, two midrange, and four woofers) and Digital Signal Processing (DSP) technology. 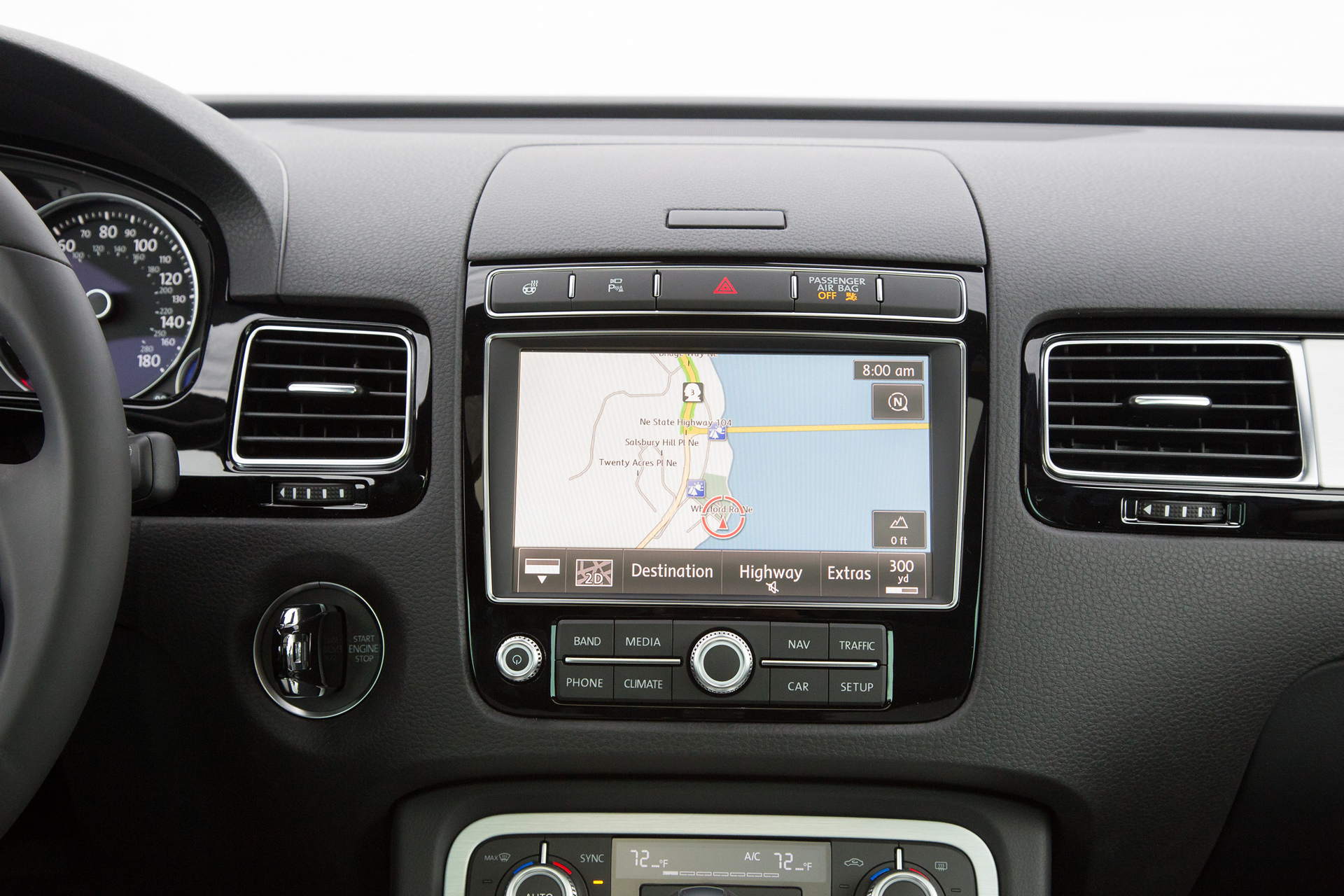 Another feature on the Executive trim is the Area View 360° exterior camera system. Utilizing four cameras (in the rear hatch, the door mirrors and the radiator grille), Area View transmits images of the area around the Touareg onto the touchscreen in the center console. The control unit also calculates from the four individual camera images a high-quality overall view of the surrounding area—from the perspective of a virtual camera above the vehicle. On off-road terrain, Area View relays via the front and side cameras the scene immediately ahead and to the side of the vehicle. 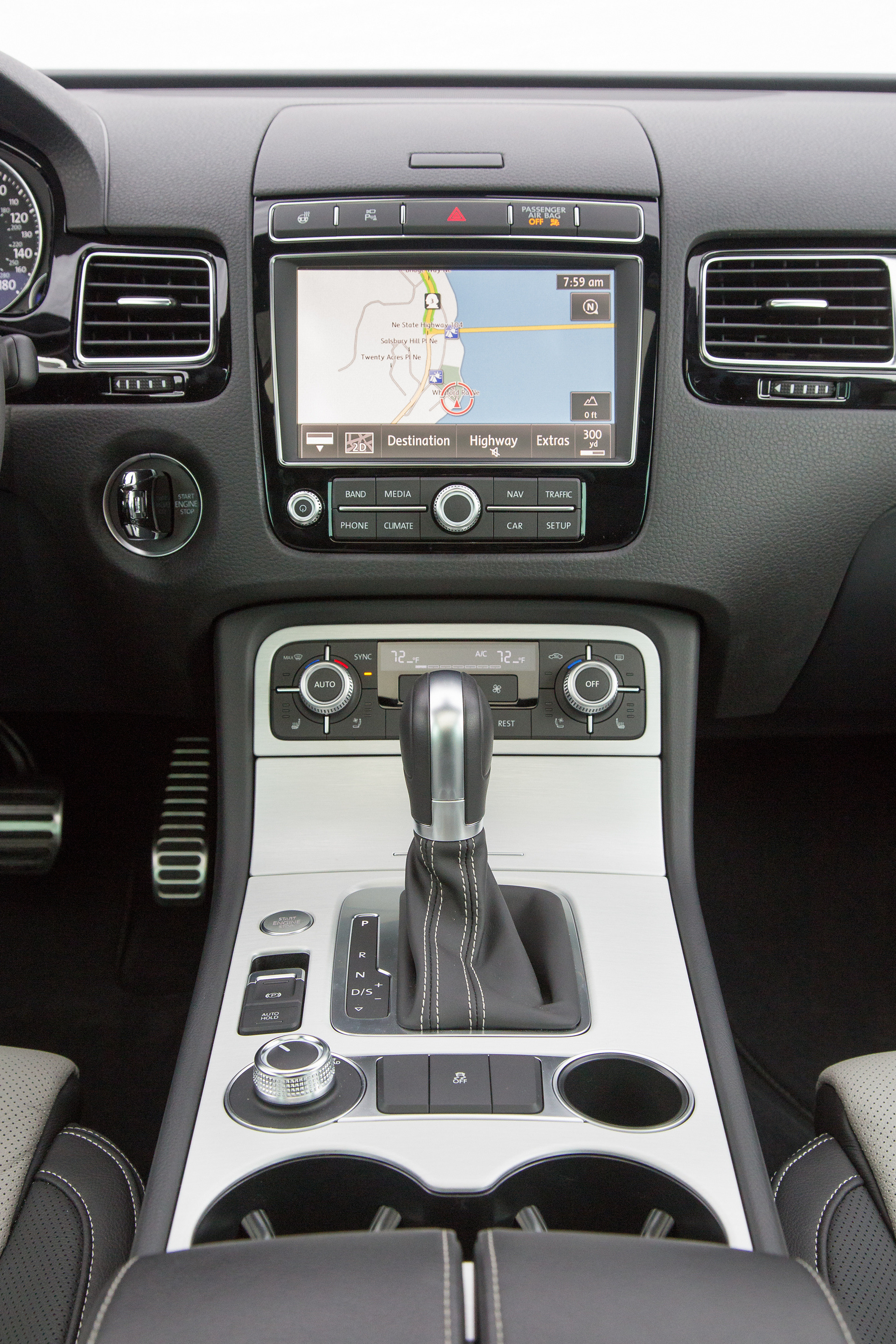 The second-generation Touareg has a 113.9-inch wheelbase, which allows for 36.9 inches of rear legroom, as well as a 60/40-split rear seat with 6.3-inches of fore/aft travel and reclining backrests. The Touareg can also accommodate 32 cubic feet of cargo and luggage behind the rear seats, or 64 cubic feet with the split rear seat folded. The standard hands-free Easy Open liftgate allows for convenient access to the back of the vehicle. 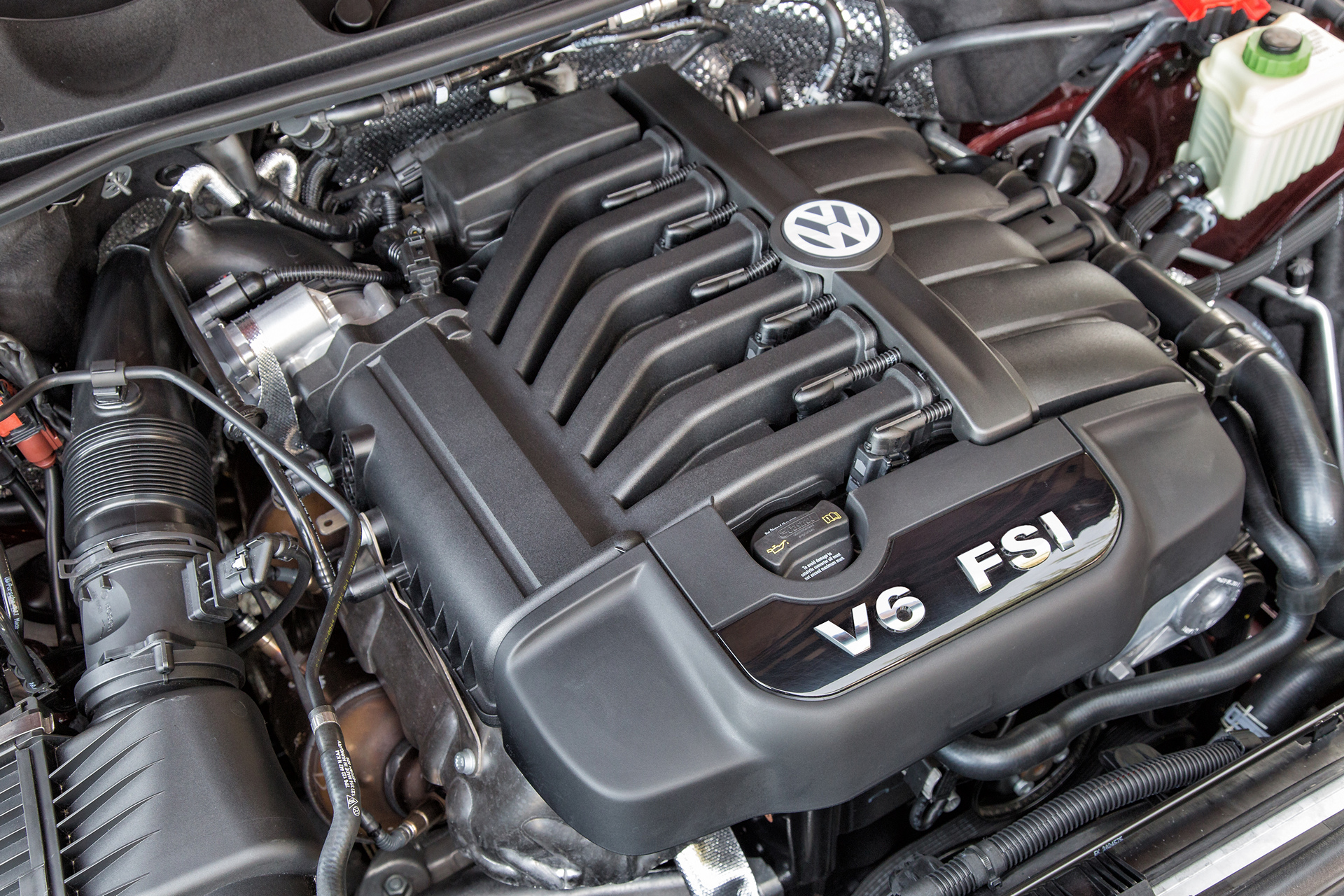 The 2017 Volkswagen Touareg has a V6 FSI® gasoline engine mated to an eight-speed automatic transmission with Tiptronic® shifting capability. A 4Motion all-wheel-drive system is also standard. Touareg models are capable of towing 7,716 pounds when properly equipped.

2017 Touareg models send power to the 4Motion permanent all-wheel-drive system via an eight-speed automatic transmission that features manual gear control, Sport mode and Dynamic Shift Program (DSP) technology that helps adapt to the driver’s individual style by adjusting the shift points accordingly. This transmission also uses its seventh and eighth ratios as overdrive gears, with the top gear reducing engine rpm by about 30 percent compared to sixth. Because of this, the vehicle’s top speed is actually achieved in sixth gear. In addition to the fuel economy benefits of the low overdrive rpm, this configuration can allow for quieter, more relaxed highway cruising. 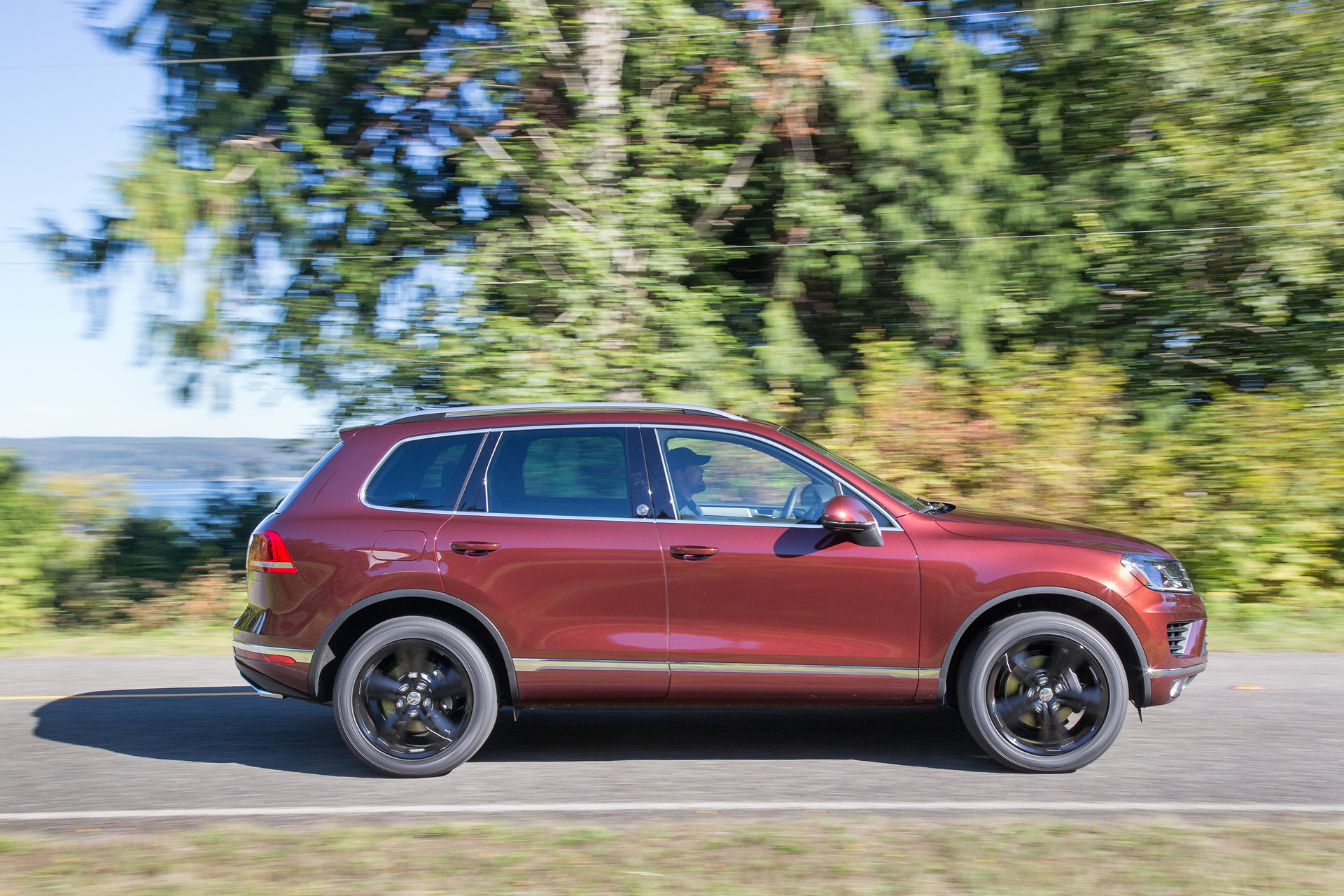 The 2017 Touareg features the latest iteration of the independent suspension layout that debuted with the second-generation SUV. With lightweight aluminum-alloy upper and robust steel lower control arms at both front and rear, the Touareg’s coil-spring suspension is capable of great control and road manners in any situation. The 4Motion permanent all-wheel-drive system is standard on all Touareg models. This features a limited-slip differential that splits available torque 40 percent front and 60 percent rear (nominally) for balanced driving both on and off road.

All 2017 Touareg models feature a variable-ratio hydraulic power-assisted steering system that needs just 2.6 turns from lock to lock. This gives a precise, responsive feel in various conditions, from parking lots to the open highway. Touareg models are fitted with 13.0-inch vented disc brakes front and rear. 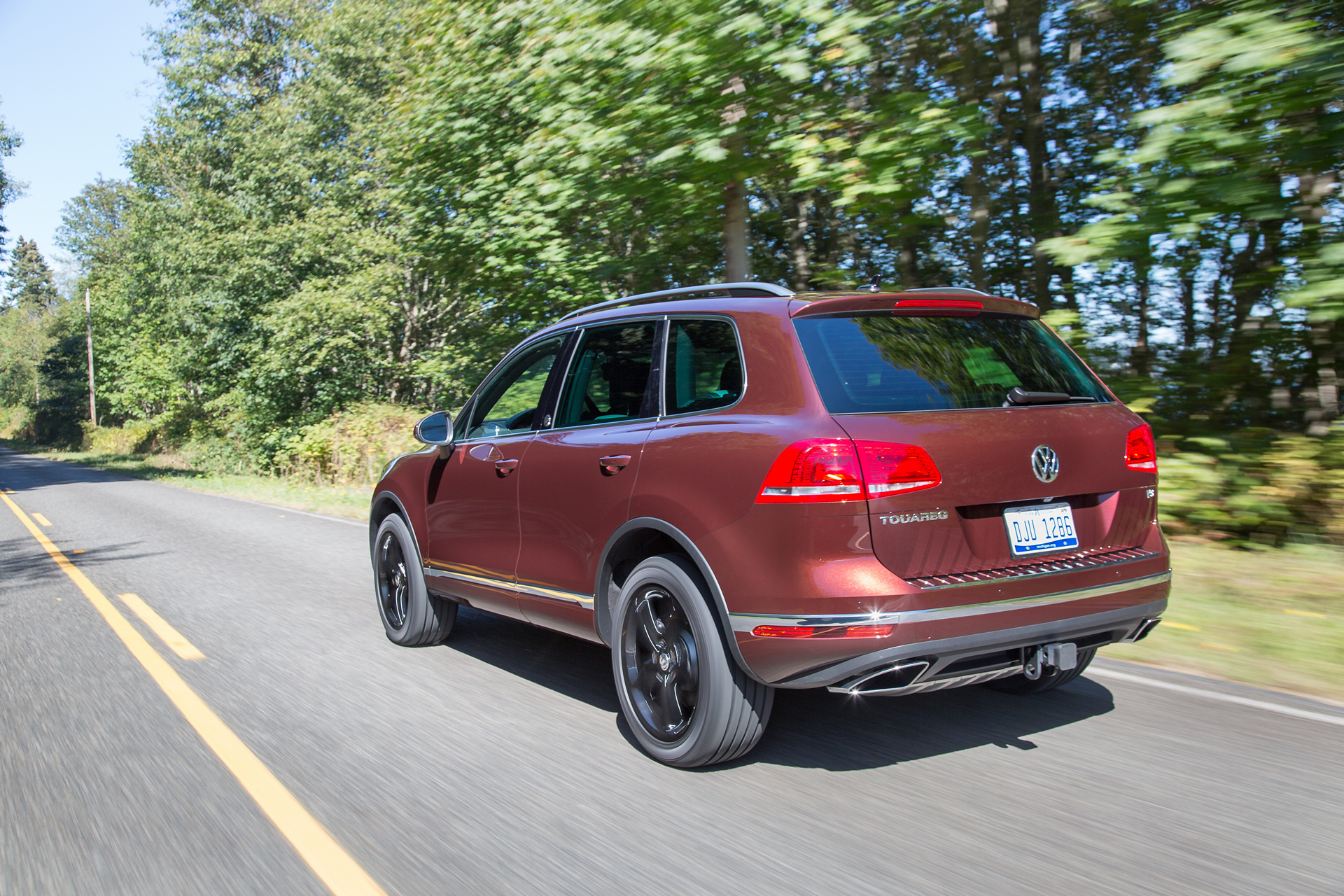 A combination of both passive and active safety systems help to keep occupants protected in the latest Touareg. In addition to the chassis, which was designed from the ground up with strength and stability in mind, the Touareg also has a total of six airbags—including Side Curtain Protection® head airbags for front and rear outboard occupants, and front and thorax units for driver and front passenger—and a number of mechanical and electronic systems that work in tandem to help keep the Touareg stable.

This lineup of active safety systems also includes an advanced Rollover Sensor System that monitors the vehicle’s turning angle and speed in order to help detect possible rollover situations. If it determines a rollover hazard is present, the system can deploy the Side Curtain Protection airbags to help protect rear occupants. Anti-lock brakes and a stability control system are standard on all models.

All 2017 Touareg models have the Automatic Post-Collision Braking System as standard. This builds on the premise that a collision is rarely a single, instantaneous action, but rather a series of events that follow the initial impact—the most significant of which can cause additional collisions. The Automatic Post-Collision Braking System helps address this by applying the brakes when a primary collision is detected by the airbag sensors, thus helping reduce residual kinetic energy and, in turn, the chance of additional damage.

The Touareg also includes Volkswagen’s Intelligent Crash Response System that can shut off the fuel pump, unlock the doors, and switch on the hazard lights if the car is involved in certain types of collisions where the airbags deploy.

The 2017 Touareg comes standard with a number of advanced driver assistance features, starting with Adaptive Cruise Control (ACC) that uses dual front radar sensors to maintain a set following distance to the vehicle in front of the Touareg. This system can bring the Touareg to a complete stop in traffic situations, featuring a range of just over 200 yards with a field of view of 40 degrees. Augmenting the ACC is the Forward Collision Warning and Autonomous Emergency Braking (Front Assist) system. When it detects an imminent collision, visual and audio signals alert the driver and, if necessary, emergency braking can be activated to help slow the vehicle.

The Lane Departure Warning (Lane Assist) system is camera-based. If there is a danger of the car changing lanes without the turn signal being engaged, the system helps alert the driver by vibrating the steering wheel and by depicting the lane markings that the car has crossed on the multifunction display in the instrument panel. The system consists of a camera between the headliner and the rear-view mirror and a motor that vibrates inside the steering wheel. The camera recognizes visible lane markings (one side suffices) and, using a special algorithm and taking into account vehicle information, calculates the risk of the car leaving the lane. Lane Assist is activated at speeds of 40 mph and above.

Lane Change Assistant (Side Assist) uses two radar sensors at the rear on the Touareg to scan approaching traffic. LEDs in the side mirrors help inform the driver of a vehicle in the blind spot or approaching at a higher rate of speed. Any use of the turn signal during this phase shows that the driver intends to change lane and thus signals potential danger. The LEDs in the side mirrors then flash brightly, helping warn the driver of a situation that could possibly be dangerous.

The Park Distance Control (Park Pilot) uses ultrasonic sensors located in the front and rear bumpers to monitor a range of up to five feet in front or behind the vehicle. The system is activated when reverse gear is engaged or below a speed of 9 mph and helps provide guidance when parking or in tight situations.

The system provides static and dynamic guidance lines in the camera screen when reversing to help assist the driver in assessing distances for parallel and perpendicular parking. It also has audible and visual warnings when the car starts to approach parked cars or static objects from the front or rear.