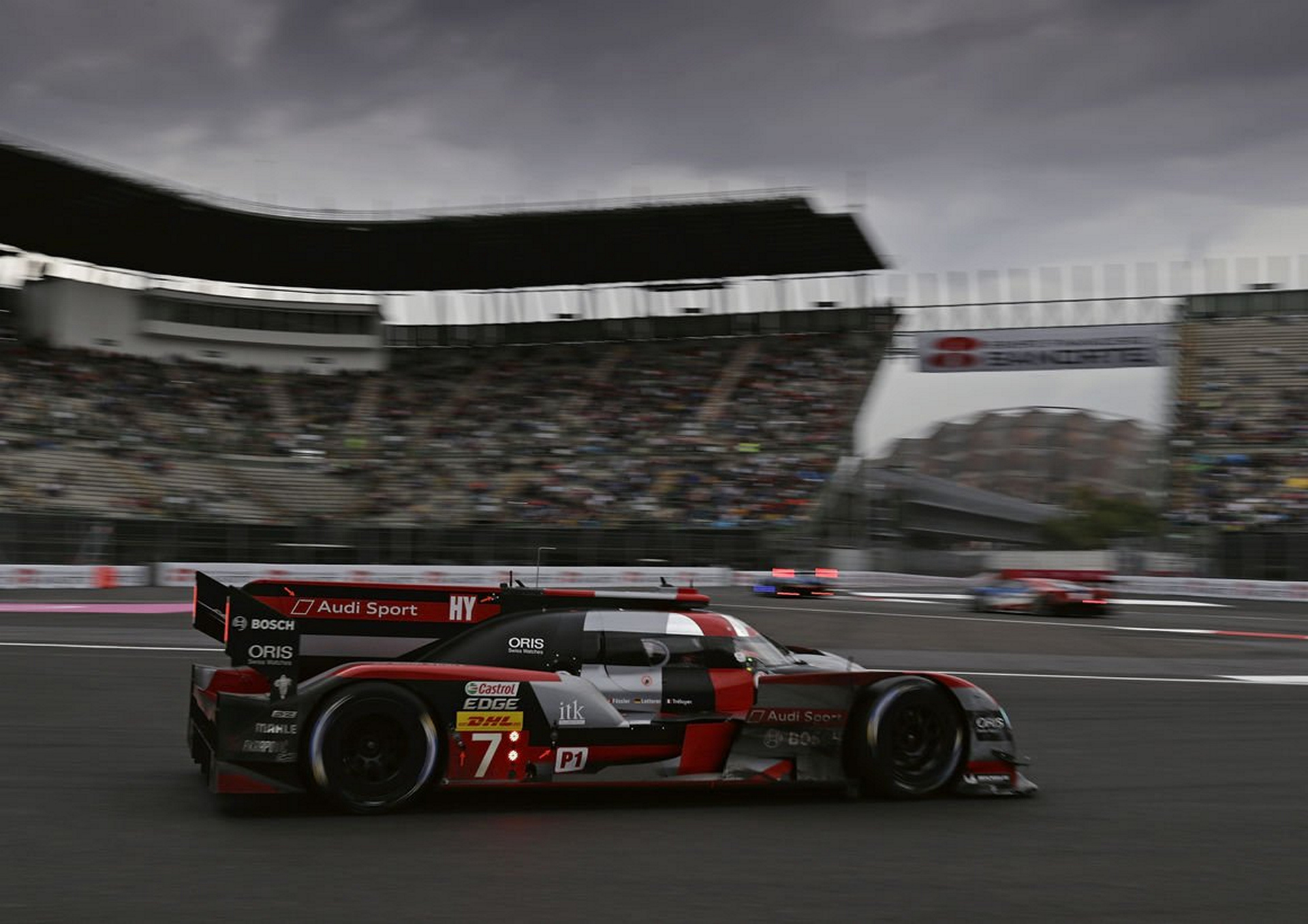 Audi showed a strong battle in round five of the FIA World Endurance Championship (WEC). Following Audi’s pole position, both Audi R18 cars took turns leading the race in Mexico in the early stage. Car number 8, however, lost more than 30 minutes after suffering damage at the end of the third hour. The number 7 sister car recovered from fifth to second place following some setbacks.

The premiere of the FIA WEC in Mexico City was more than varied. As previously at the Nürburgring, Audi fought a close battle for victory with Porsche. In the first half of the race, the number 8 Audi R18 had the best chance for victory.

Lucas di Grassi (BR) took the lead early from his teammate André Lotterer (D) and, running in position one, turned driving duties over to Loïc Duval (F). The Frenchman maintained his place in the group of front runners as well. When Oliver Jarvis (GB) took over car number 8, a technical defect occurred on his first lap. The left front wheel bearing failed so that the Briton had no chance when braking to enter the next turn and drove into a tire barrier. The subsequent repairs cost the squad more than 30 minutes.

At this point in time, when rain set in, Audi Sport Team Joest opted for intermediate tires. André Lotterer proved it was a perfect choice for the shower. The German recovered to the front of the field in this stage: a remarkable performance as car number 7 had previously dropped to fifth place. In spite of correct calculations and impeccable pit stop instructions, the race car with Marcel Fässler (CH) at the wheel had run out of fuel in the pit lane so the team had to push it into its correct position and lost a lot of time. While Lotterer was battling for victory in the final stage a defect in the brake system occurred. This cost additional time, so the team ultimately had to settle for position two after six hours of racing. Consequently, an Audi driver squad mounted the podium for the fifth time this year, marking the best result of the season to date for Fässler and Lotterer.

“This comeback was a strong performance by André, Marcel and the entire team,” said Head of Audi Motorsport Dr. Wolfgang Ullrich. “That we were in contention for victory up until the last hour of the race proves how strong we basically were in Mexico, which makes it all the more regrettable that these technical issues deprived us of our chances for victory.”

Car number 8 ultimately crossed the finish line in position 27 following a repair of the hydraulic system. While di Grassi/Duval/Jarvis received no points for this in the drivers’ classification, they secured ten points for Audi in the manufacturers’ classification in addition to the 18 scored by their teammates.

The next race is coming up in two weeks’ time. Audi will contest round six of the FIA WEC at Austin. On the race track in Texas, the brand with the four rings has celebrated two victories since 2013.