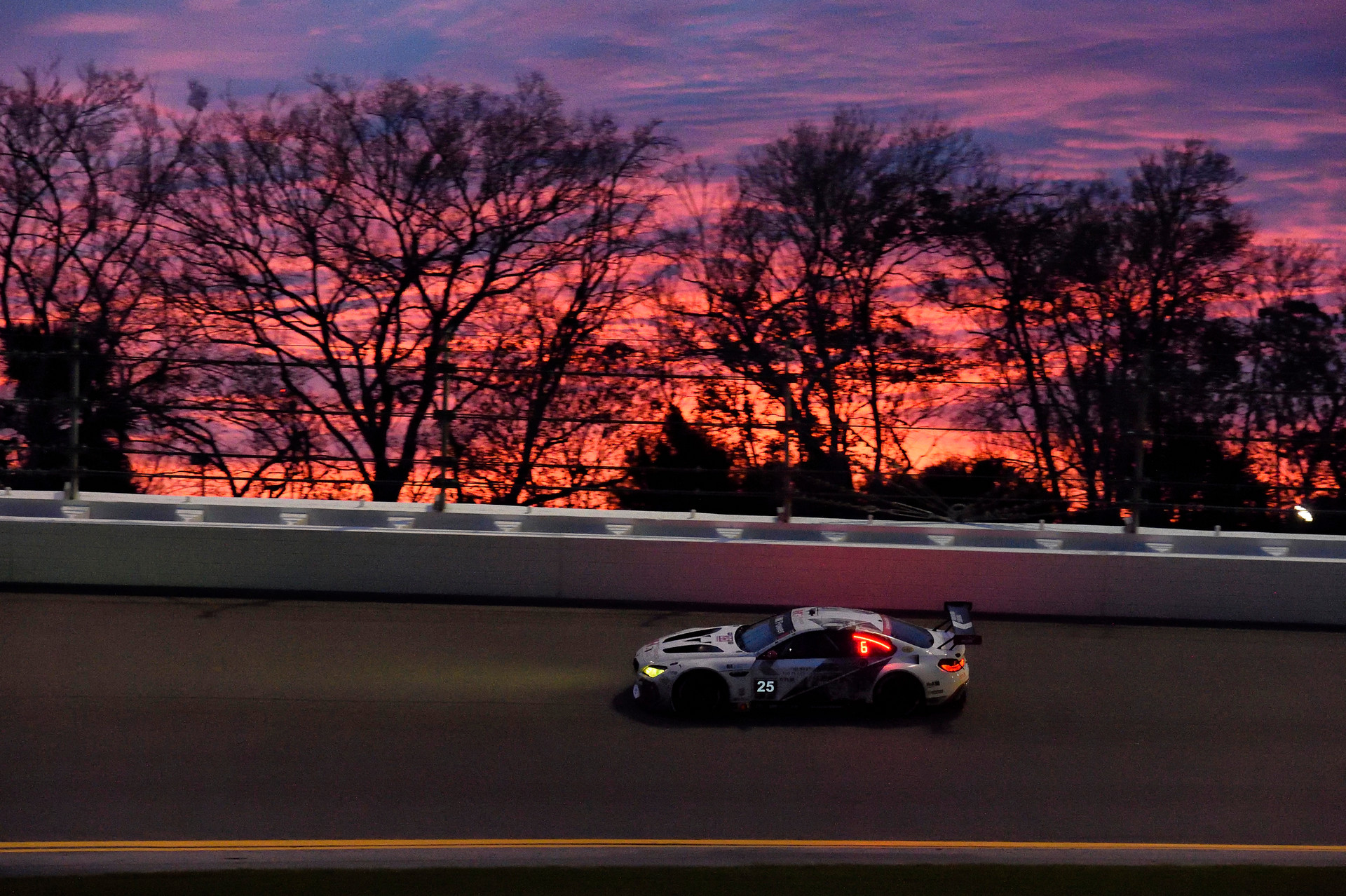 Both the new BMW M6 GTLM and the BMW M6 GT3 proved their promising potential in the very first round of the IMSA WeatherTech SportsCar Championship: At the classic 24 Hours of Daytona (US), the number 25 BMW M6 GTLM crossed the line in fifth in the GTLM category. Bill Auberlen (US), Dirk Werner (DE), Augusto Farfus (BR) and Bruno Spengler (CA) had alternated at the wheel over the course of their 721 race laps. 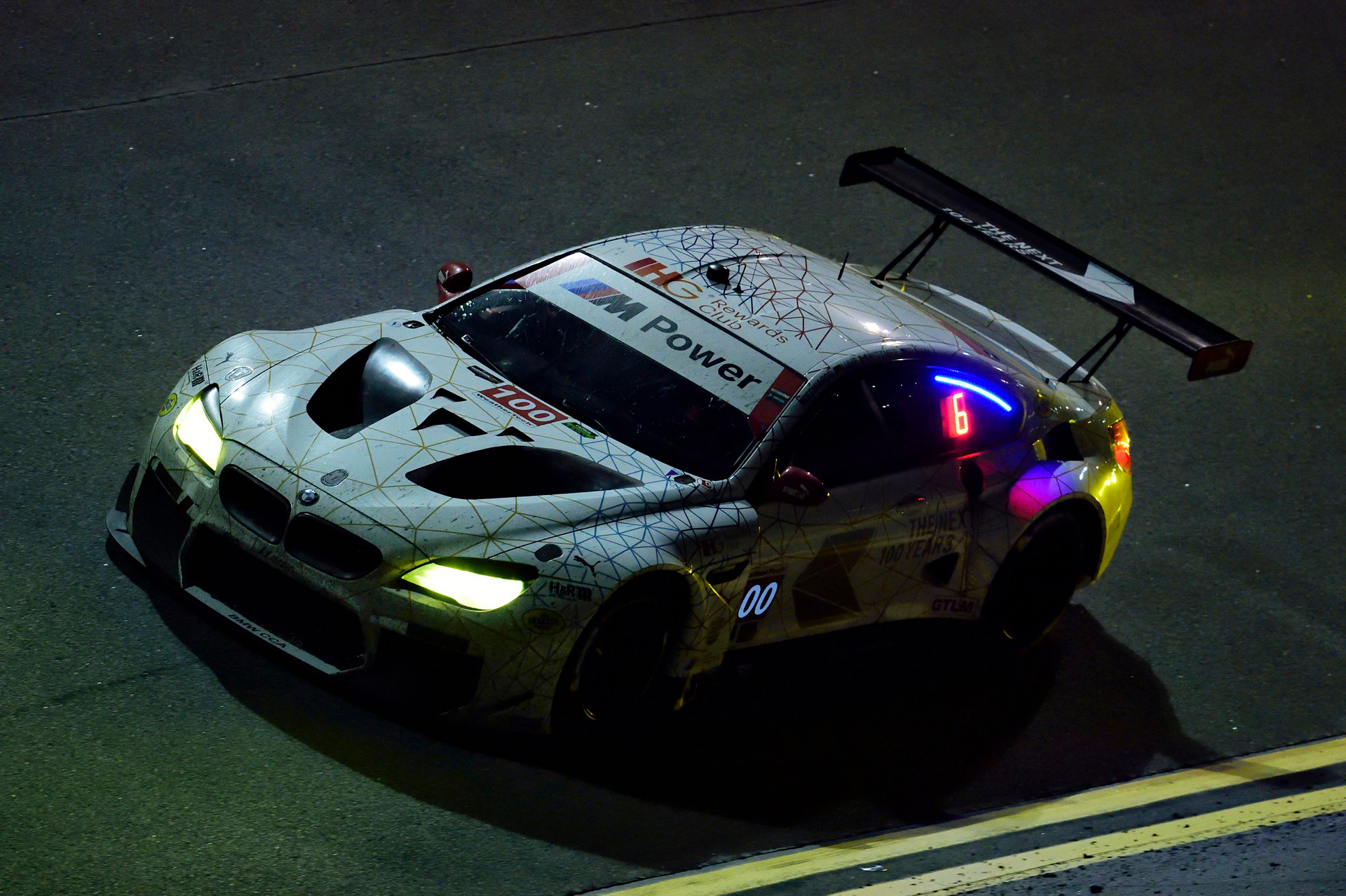 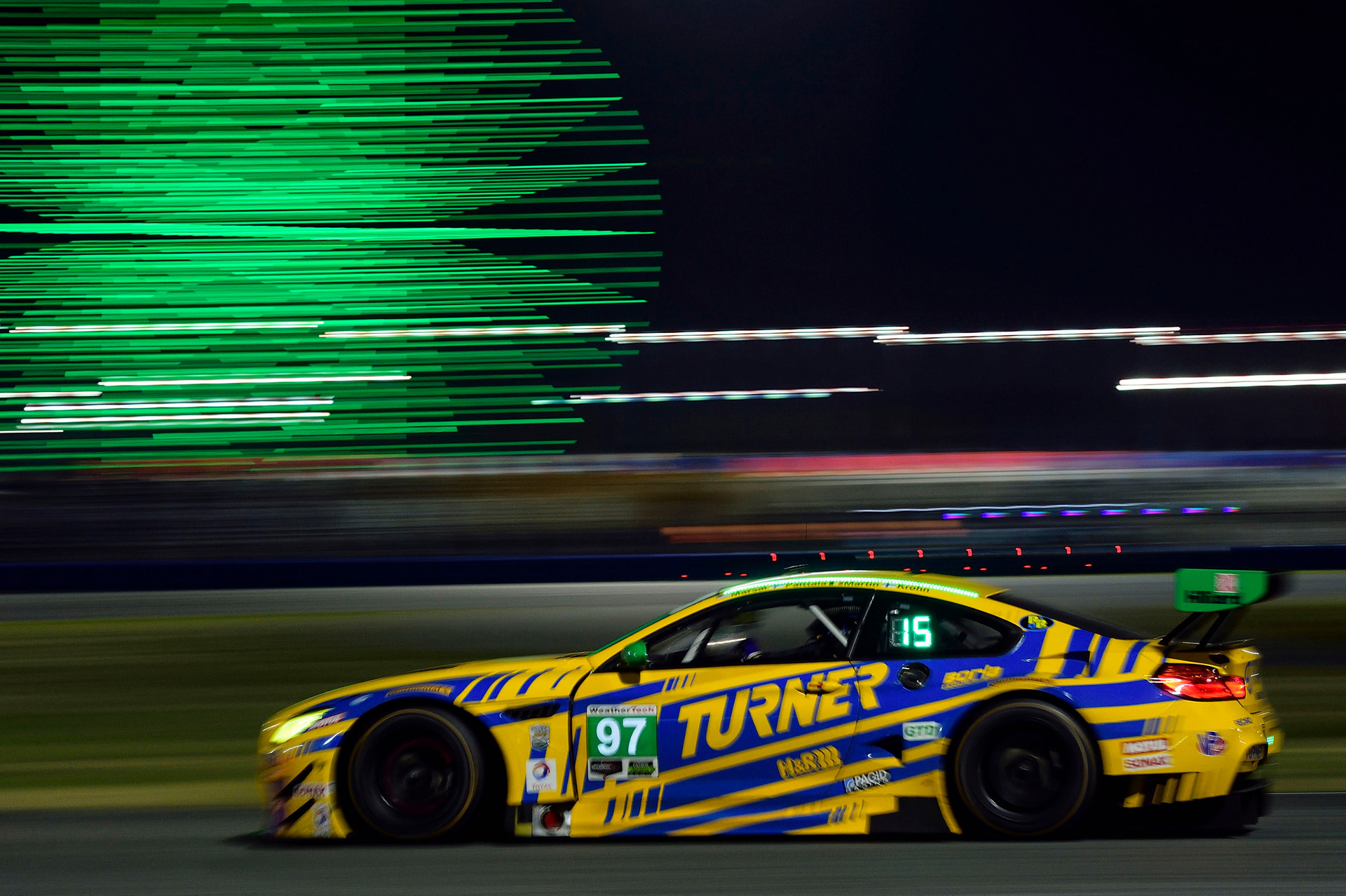 The No. 96 sister car had dropped back early in the race due to technical problems, ultimately finishing 17th in the GTD category. 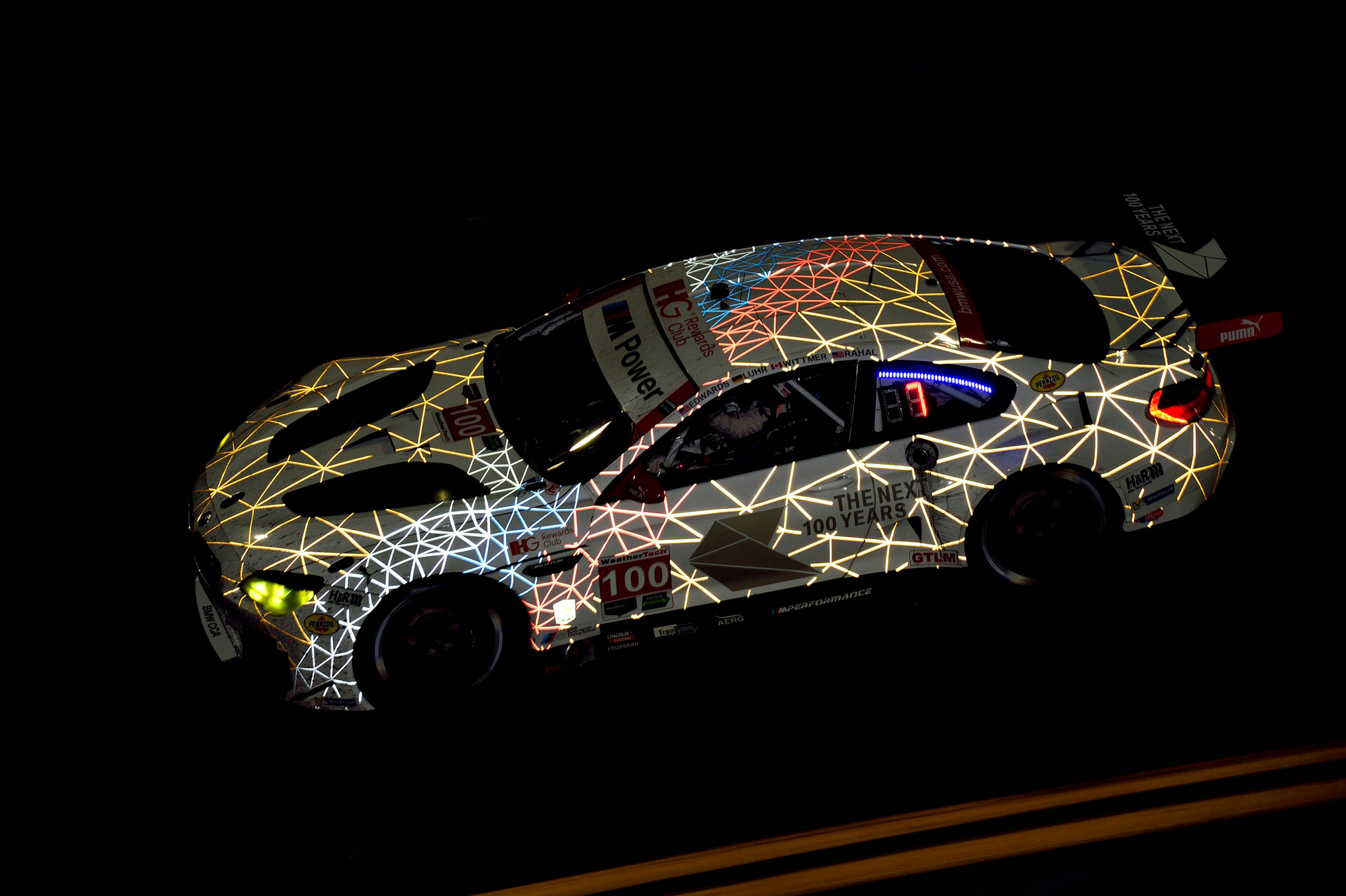 The 7:13 a.m. sunrise over the Daytona International Speedway showed only one BMW M6 GTLM remaining in the Daytona 24 Hours. About four hours earlier, on lap 360, the number 100 BMW M6 GTLM, with Lucas Luhr (DE) behind the wheel, suffered a crash in turn one due to a brake problem. Luhr was unhurt, but the damage forced the team to retire the car from the race. Luhr had shared driving duties with John Edwards (US), Graham Rahal (US) and Kuno Wittmer (CA).

“After all these months of intensive development work, countless kilometres of testing and all the passion brought in by everyone at BMW Motorsport and in our teams to get our new GT race cars ready, our goal was to finish the race in Daytona – and, if possible, bringing home some good results. Overall I’m happy with the race debuts of the BMW M6 GTLM and the BMW M6 GT3. We knew that the 24 Hours of Daytona would be a tough test right at the beginning of the season. And this is exactly what we experienced this weekend. Walking away from Daytona with P5 in the GTLM class and P6 in the GTD category is a good result and a nice reward for the whole squad. The start into our anniversary season on the occasion of the 100th birthday of BMW definitely was a positive one. With car number 100 we had to endure quite a scary moment. Fortunately Lucas Luhr escaped from this accident without a scratch. For the fans it was an extremely exciting and entertaining race. Many different cars fought for the lead, several manufacturers performed on a similar level. The IMSA WeatherTech SportsCar Championship promises to be a real thriller in 2016. We saw that the basis of our all-new car is very promising. And I’m confident that we will score some really good results over the course of the season.”

“You never know how you truly add up until you get to the first race. The 100 car was having a really good race, so it was a shame that we had a problem that you don’t see very often. Unfortunately it took us out of the race. I think the performance of the M6 was quite good and the guys were doing a great job. The same goes for the 25. It is a new car and I think just finishing the race was kind of a victory in its own right. It is disappointing naturally not to have won, but that was asking a lot of this car on its maiden voyage. The Corvette is a well proven car, the Porsche is the same thing and I think we saw that today. Given that the M6 is a brand new car, with brand new systems – everything – the fact that the 25 car made all 24 hours without a lot of problems says a lot.”

“The No. 25 M6 ran almost perfectly for 24 hours. We missed a few kilometers per hour on straight line speed to our competitors, but that will be addressed. After a day like today we can certainly hold our heads high.”

“In general I think everybody can be quite happy with our car. We had little problems here and there, but not necessarily with the car. The race was tough and sometimes we had to land back on our feet after struggling a little bit. But now it is the end of the race and all the engineers and mechanics kept the car in good shape and we are good enough to fight for a podium. For the first race for the M6 I think we can be quite happy because we had no major problems. I think all the testing paid off and I am quite happy. Obviously this is a completely different track to the other ten ones we race on in this series, so since the M6 is a new car we have to go to each race and start with a clean sheet of paper, get our set up right and maybe the drivers will have to adapt a little bit to the car on different tracks. But we have a good group of people and I am confident everyone is pushing.”

“I was very excited coming to this race as I had seen at the Roar what the new M6 could do. I felt it would be a fantastic race car for Daytona and that proved to be the case. I was also very happy to be the driver to bring the car across the finish line. To finish a 24 hour race in a brand new car with no major technical problems is a great achievement in itself. Okay we may lack top speed and this we need to pass other cars, but I know BMW will work on that as this is just the start of the project. I had some very intense stints and the one early in the morning was like a double qualifying when I was trying to hang in there with the Porsches and Corvettes.”

“For the first 24 hours for the M6 it is a good experience and it is important to cover some kilometers and stay on track. Knock on wood we haven’t had big technical defects so far, so we will see. Unfortunately we miss a little bit of performance compared to the opposition . But it is a young car and there are still things to learn and things to do on it. It is a good start for the car, but as I said before, the opponents were a little bit quicker during the whole race, and was difficult to expect more than a top three or four finish. The positive is that we didn’t have any large technical issues and the car was running well. That is positive for the future and we have to keep on working and try to make the car even faster.”

“We had quite a good race. There were no big issues or even little mistakes. Unfortunately, we did not have the top speed of our competitors. The M6 GT3 definitely has potential. To finish 6th in its very first race – a 24 hour race – is excellent. In time I know the M6 GT3 will be able to show all of that potential.”

“Racing in Daytona has always been one of my dreams. It is one of the biggest races in the world and I have grown up watching these races. I have always wanted to be here and now I have had the opportunity to come. The M6 GT3 is quite good. It has a lot of potential. It is the first outing for the car in race conditions, so it has been impressive the way we have been able to run with it. I am happy with the whole Turner Motorsport team and the way they worked, how everything is organized and it is a real pleasure to work with them.”

“There was some kind of explosion at the front right that made the bonnet go up, so I couldn’t see where I was going. I believe it was a brake problem. I had two or three good hits. It’s a shame because we were running well and we were right there in the hunt. It is also a shame for all the guys with a new car that had such a good performance for the first time running and they don’t get rewarded.”

The IMSA WeatherTech SportsCar Championship is set to continue on 19th March 2016 with another classic race, the 12 Hours of Sebring (US).