Porsche Weissach Development Center: A Look Behind the Scenes 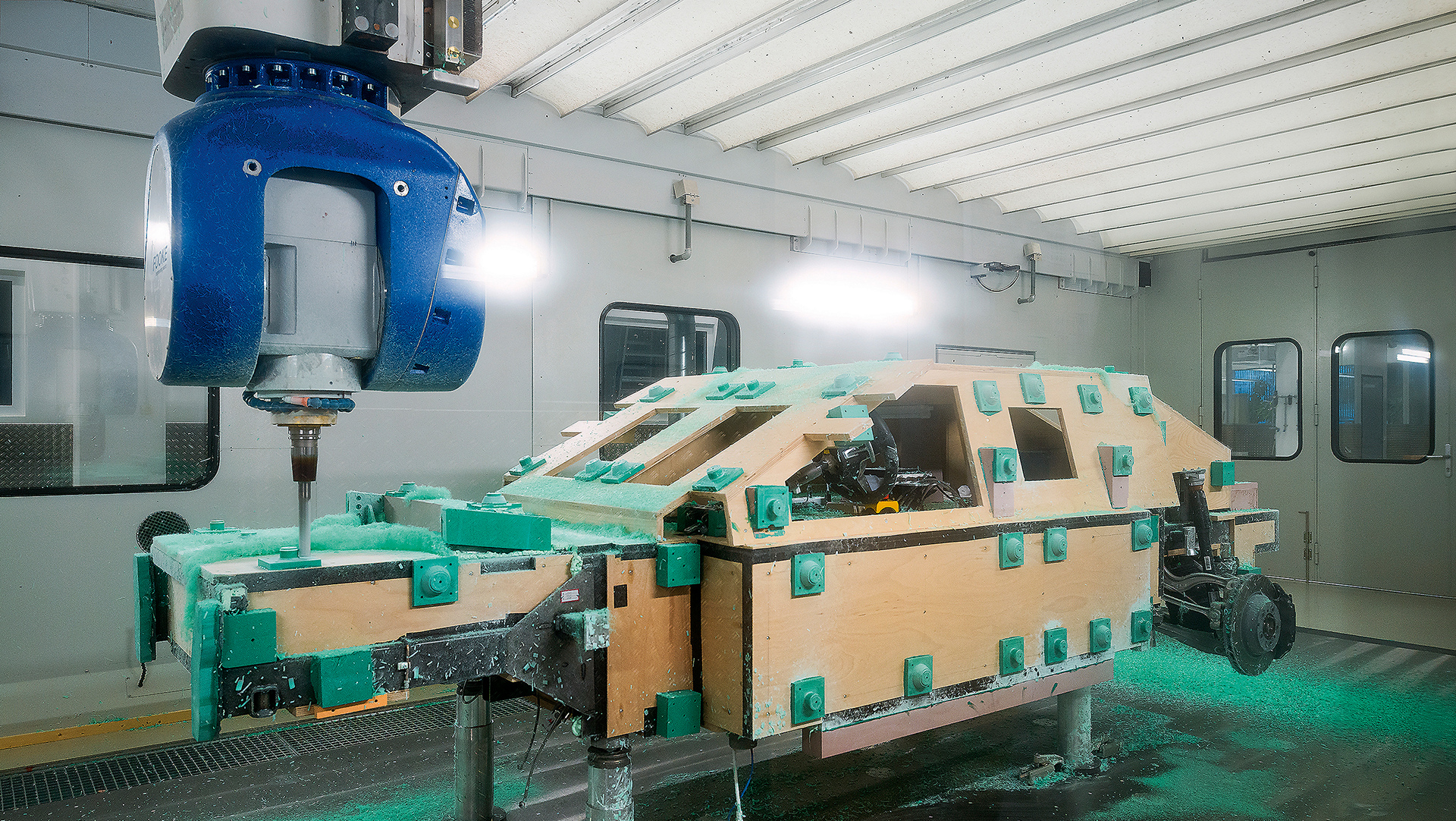 Giving shape to the cars of the future — this is the challenge faced by model builders. The result: 1:1 scale design models. The Porsche Weissach Development Center is abuzz with milling, sintering, and modeling.

A hidden world below ground. The large glass roof above the courtyards is the only source of natural light in the long corridors, with their high, bright walls reflecting ever so faintly on the polished floor. On the floors above, Porsche designers are working on the still-secret car models of the future. In these workshops of the mind, daydreams and creativity become concrete ideas. Pure, concentrated imagination just waiting to take shape in the real world. 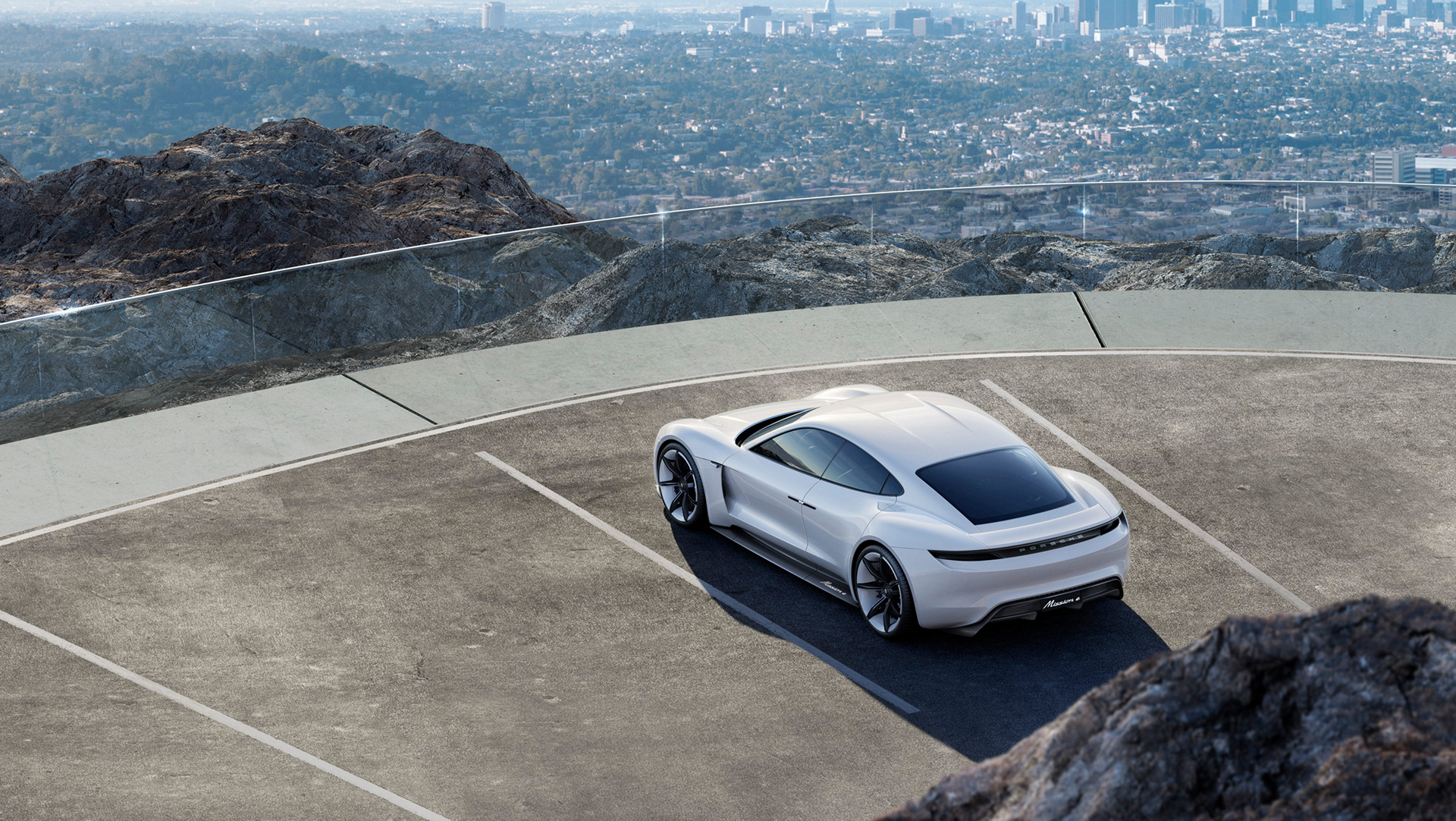 Those design ideas then materialize in the workshops of the model- and concept-building team. Out of the sparks of creativity and initial sketches emerge the computer-aided design models of the design department, and from there the denizens of the ground floor make something tangible for the first time: with substance, material, and real mass. From small design models the size of suitcases to startlingly realistic concept cars, it is all embodied here—and in almost every conceivable size.

An 1:1 scale model of the future sports car 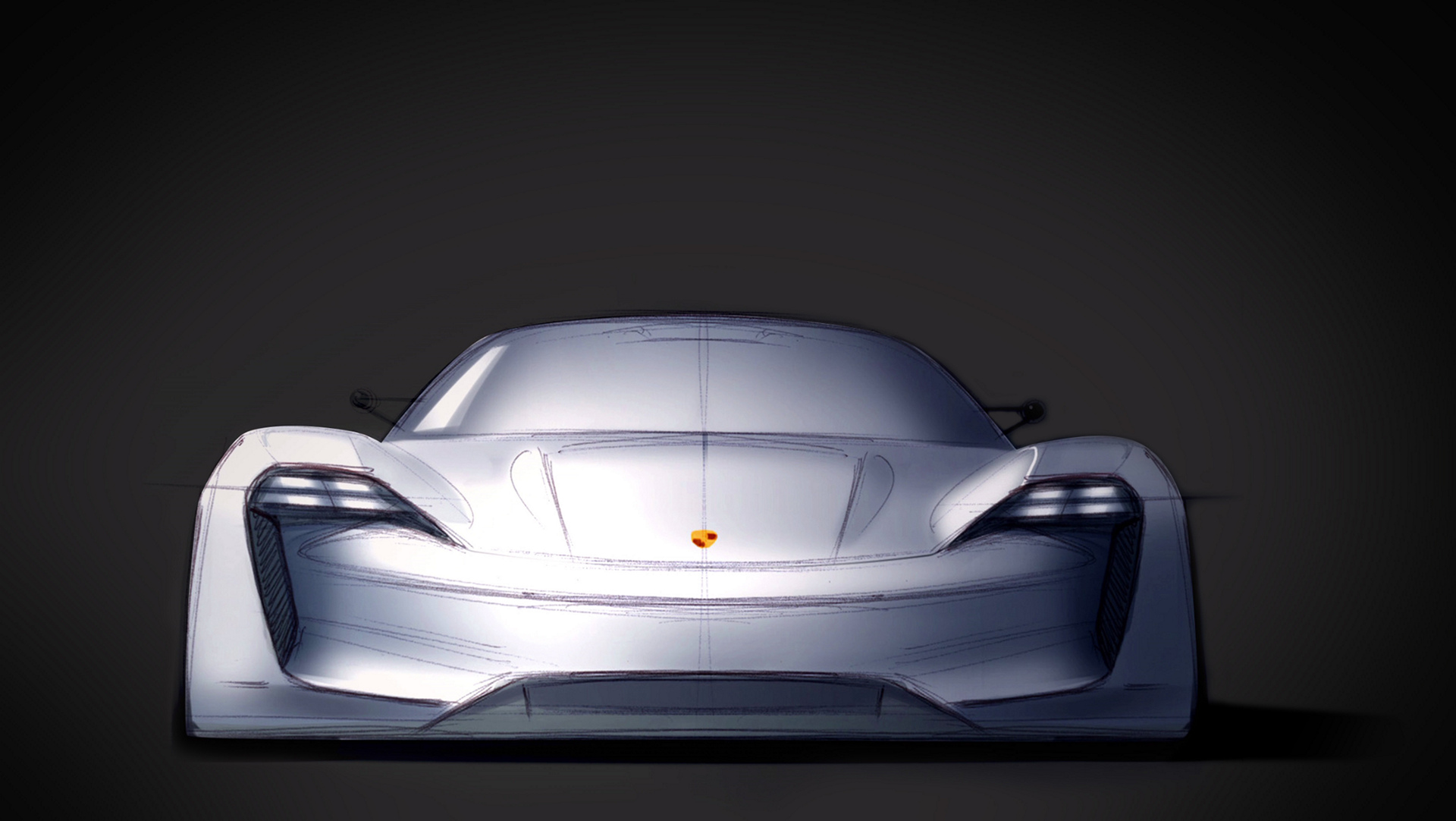 Philip Morsey, director of the entire concept design department, gazes attentively through the Plexiglas panes of the safety doors at the five-axis portal milling machine. Its gigantic head is picking up a milling cutter as thick as an arm. The chuck carefully but tightly clamps onto the cutter and suddenly the sharp teeth whir into action, moving toward a greenish clump of foam on the surface of an enormous and still rather raw-looking wooden box. Morsey chuckles at the quizzical looks on the faces of his visitors.

“That’s going to be an 1:1 scale model of the future sports car with an electric drive system—the Mission E. The engineers need to have a realistic model for their aerodynamics testing and the ventilation of the high-performance batteries with cooling air.” 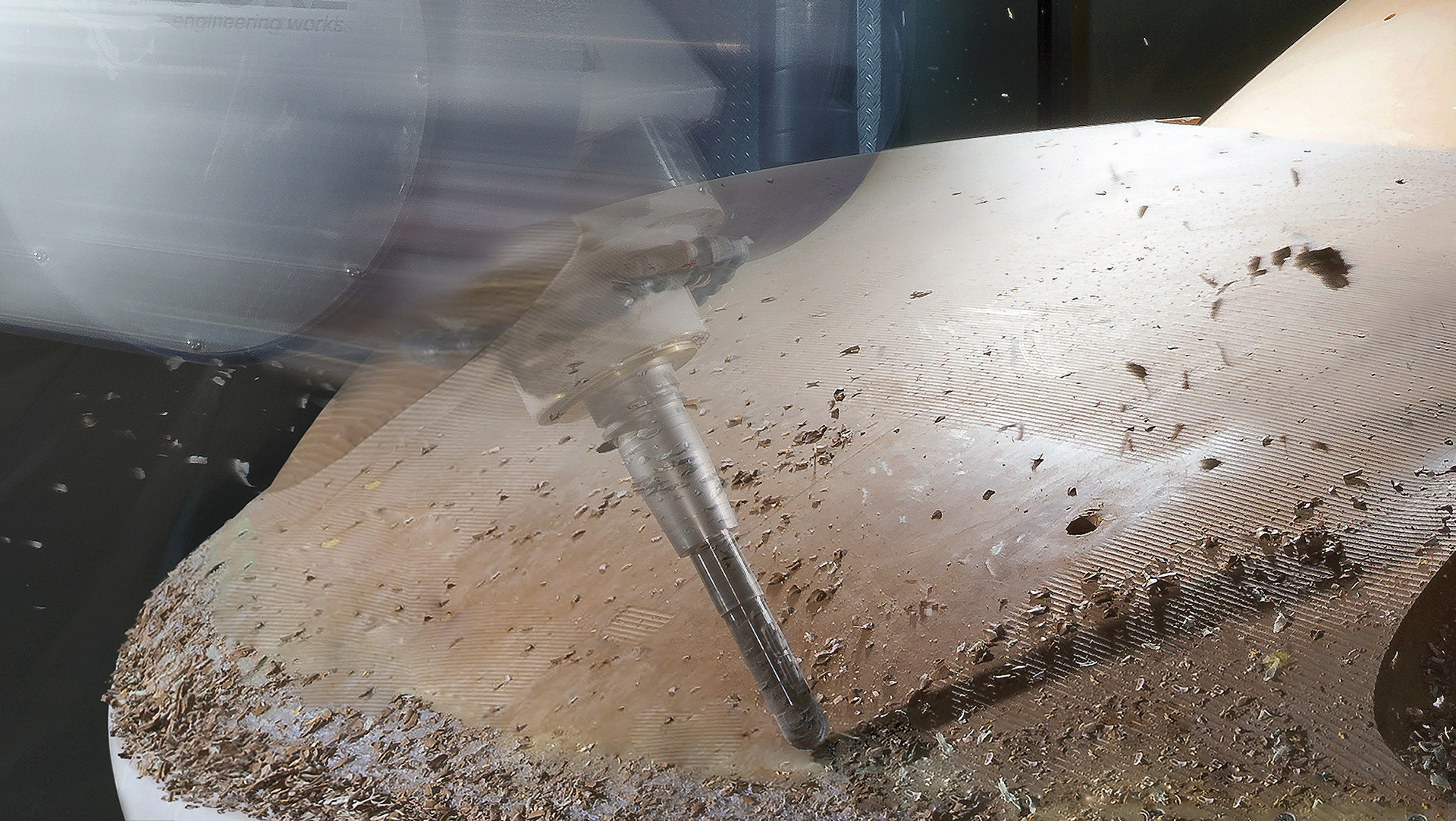 In the milling phase the vehicle is formed out of clay

He gestures toward the wooden box. “The foam elements define the later body surface with millimeter precision. The milling machine is currently setting precise reference points for the subsequent building process. But we can also cut entire 1:1 scale models right out of a block.”

Riveted, the amazed spectators watch for a few more minutes as the milling machine moves from point to point; then Philip Morsey turns around and leans against the wall with an easygoing grin. His gaze probes the contours of the building and his hands make a sweeping gesture that includes all that he surveys:

Morsey waits a minute for the message to sink in before leading the way into an adjacent room. “But making design models is just one aspect of what we do here — though admittedly they are especially exciting and glamorous.” They also allow the executive board to get an idea of how a future car will look in reality based on an initial model. “They literally make it possible to grasp a new product, and that’s incredibly important.” Until now, Dr. Christian Looman, the man on Morsey’s team responsible for the model design workshops, has listened attentively, but at this point he elaborates: “When drawings and ideas become an actual model, that gives designers the opportunity to develop their ideas further. The designers can see where the car design is already coherent, and where a correction of proportion and design is needed.”

Without a physical model, explains Looman, there would be no truly substantive feedback. And thanks to the speed that Looman’s people are capable of achieving with state-of-the­-art technology and the expertise of the model builders, the entire design process—and indeed the development overall—is stunningly accelerated. Philip Morsey pushes open the door to an area containing several small workshop rooms. The rooms play host to machines the size of refrigerators, one of which is situated between barrels full of white powder.

“In the world outside, everyone calls these machines 3-D printers, but we much prefer, especially for our newest machine, the technical term: selective laser sintering, or SLS for short.”

Morsey picks up a small gear wheel made of white plastic and slowly rotates it with his fingers. “Our colleagues in motor racing development recently asked us to manufacture a complete gearset for a power divider in order to conduct trials in load-free bench testing. Normally components like these would be manufactured out of a high-strength alloy through a very painstaking and time-consuming process, but our colleagues nevertheless treated our SLS gearset as if they were metal gears. In selective laser sintering, a special plastic powder is melted to a base at precisely defined points by a computer-­controlled laser.

Then the powder surface is lowered, new powder is added, the laser sinters the next layer according to the geometric model stored in the computer, and so on. The end product is any given component with homogeneous thickness.

But made of plastic.” Morsey explains further: “When the testing was done, they were very interested in learning the stress threshold of the material: the first gear broke only at 750 newton-­meters—the maximum torque of a 911 Turbo S in overboost on a tiny gear wheel made of plastic. So now you can surely understand why the term 3-D printer seems rather inappropriate to us.” 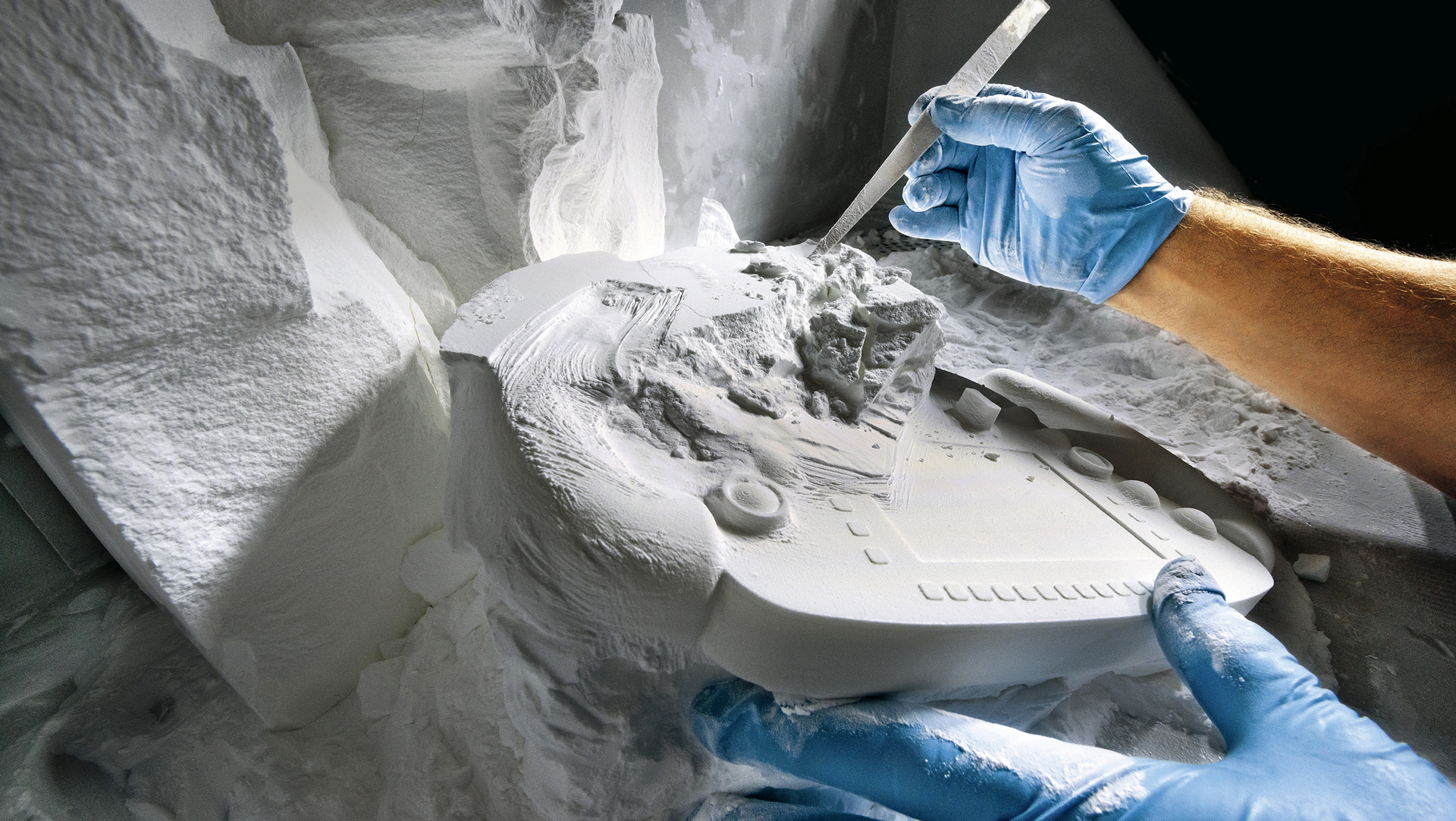 Building an 1:1 scale model of the future sports car

Christian Looman takes over: “In fact, we do produce functional components for development purposes with SLS technology—complex one-off components in just a few hours. The developers can then conduct meaningful tests and define necessary changes. A second version is created, again very rapidly, and in the end we’ve carried out an entire development step in record time.” Porsche could also have such components produced by suppliers. But it is precisely this proximity and the confidentiality provided in this secret area of development that make such a strong case for relying on in-house expertise. Philip Morsey chimes in as he guides his guests through the quiet, circuitous passageways to the next point: “And the 3-D printing technology works not just with plastic, but also with metal and other materials.” 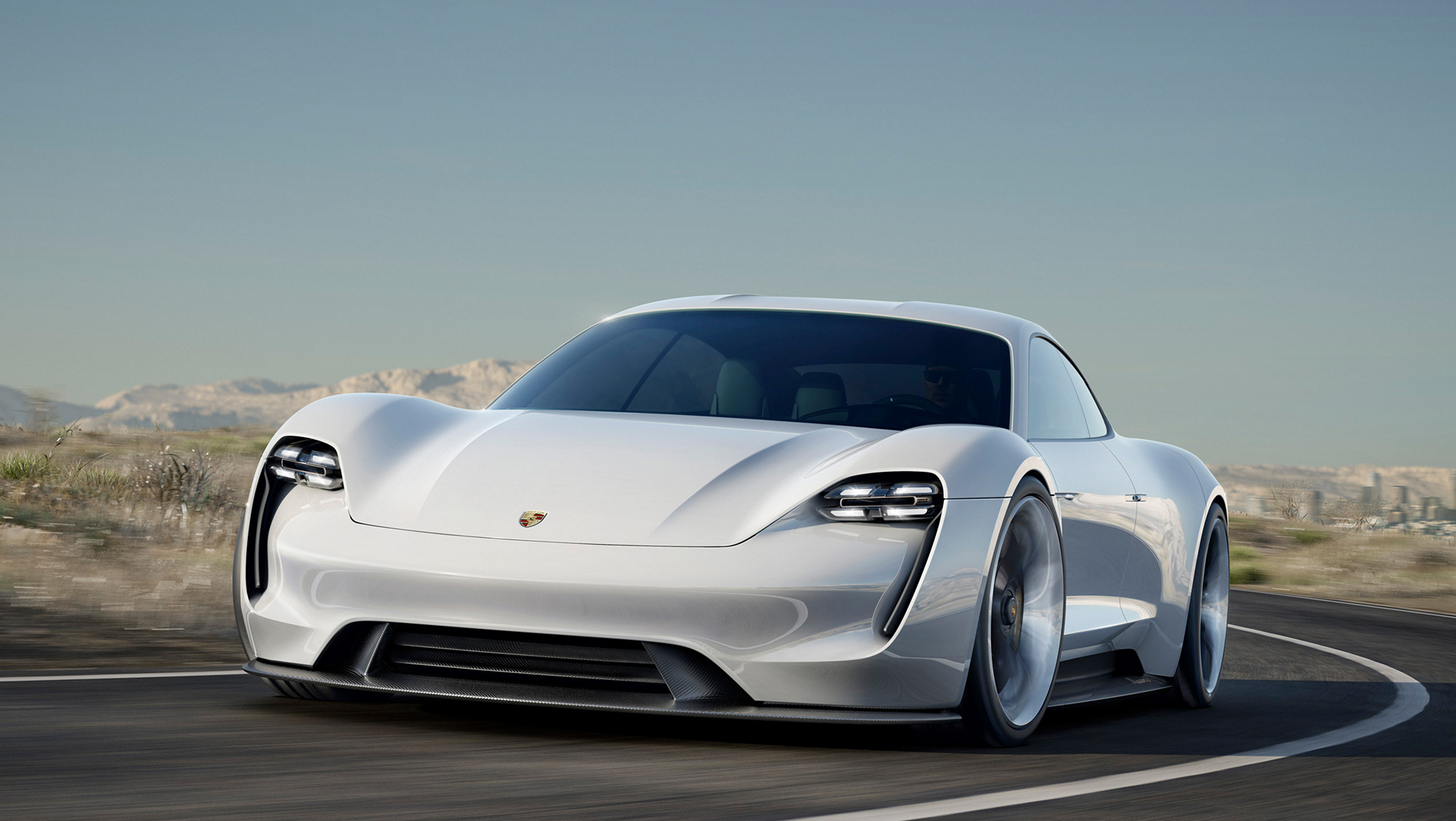 Looman points through open glass walls to an area in which staff are evidently working on pieces of plywood. “We have very talented, very special employees. Many of them build models in their free time as well and bring an amazing amount of passion and creativity to their work here. They often come up with astonishing solutions to extremely complex tasks—the thought that this Porsche spirit manifests itself at such an early stage in the development process is something that just thrills me.” 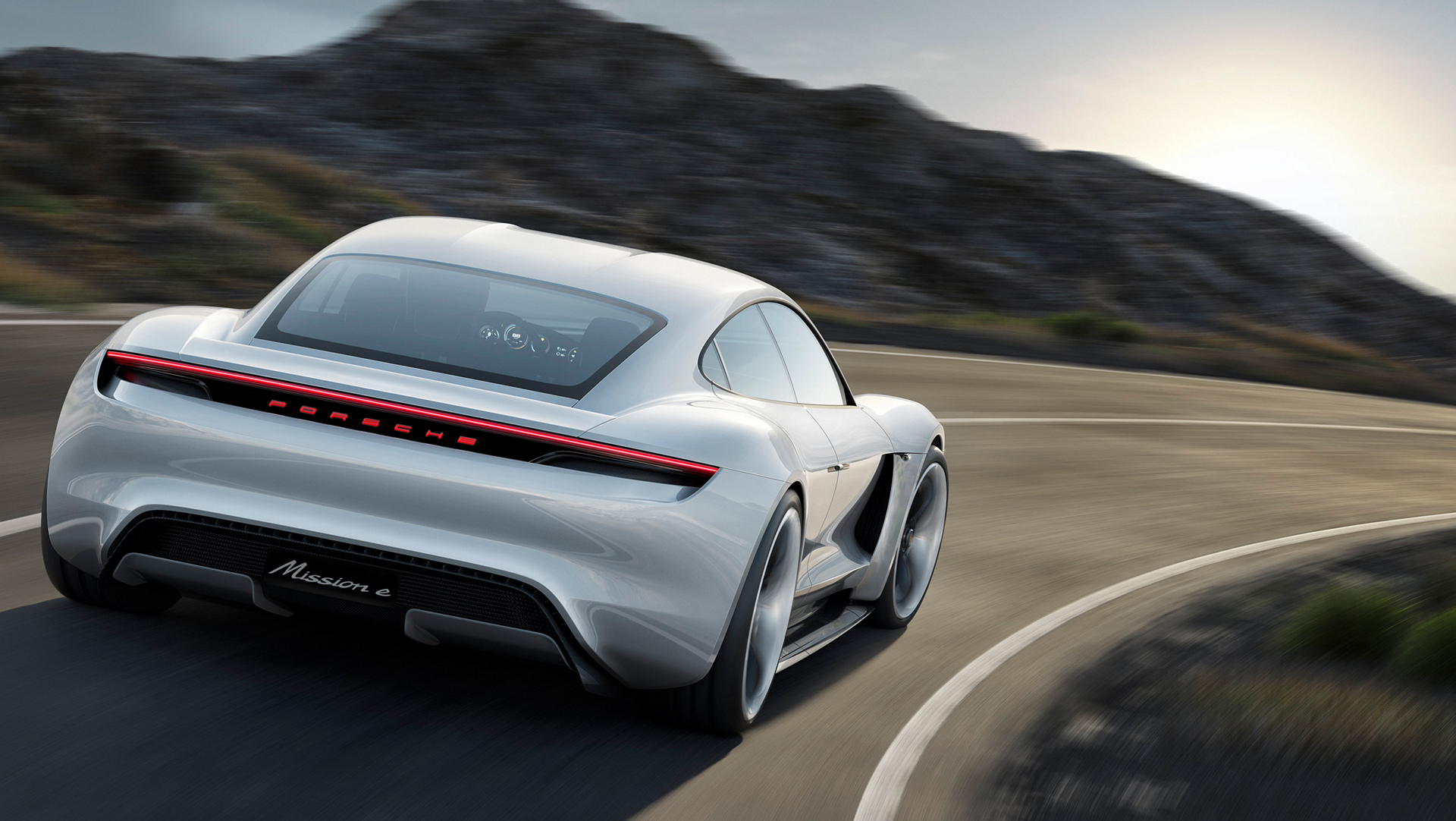 Having emerged from the subterranean labyrinth, the highlight of our journey through the model creation process for a Porsche awaits us. Brightly lit before our eyes: the Mission E. Snow white, ultramodern, exquisitely proportioned. The car wields an almost magnetic attraction on the visitors. But the attempt to open one of the car doors is in vain. Only upon further inspection, and with Morsey and Looman quietly chuckling behind us, does it become clear that the camouflage has fooled us. Though the car does have deceptively authentic-looking door joints, it has no doors. A design model. A masterful dream hatched by these moderators between vision and reality.