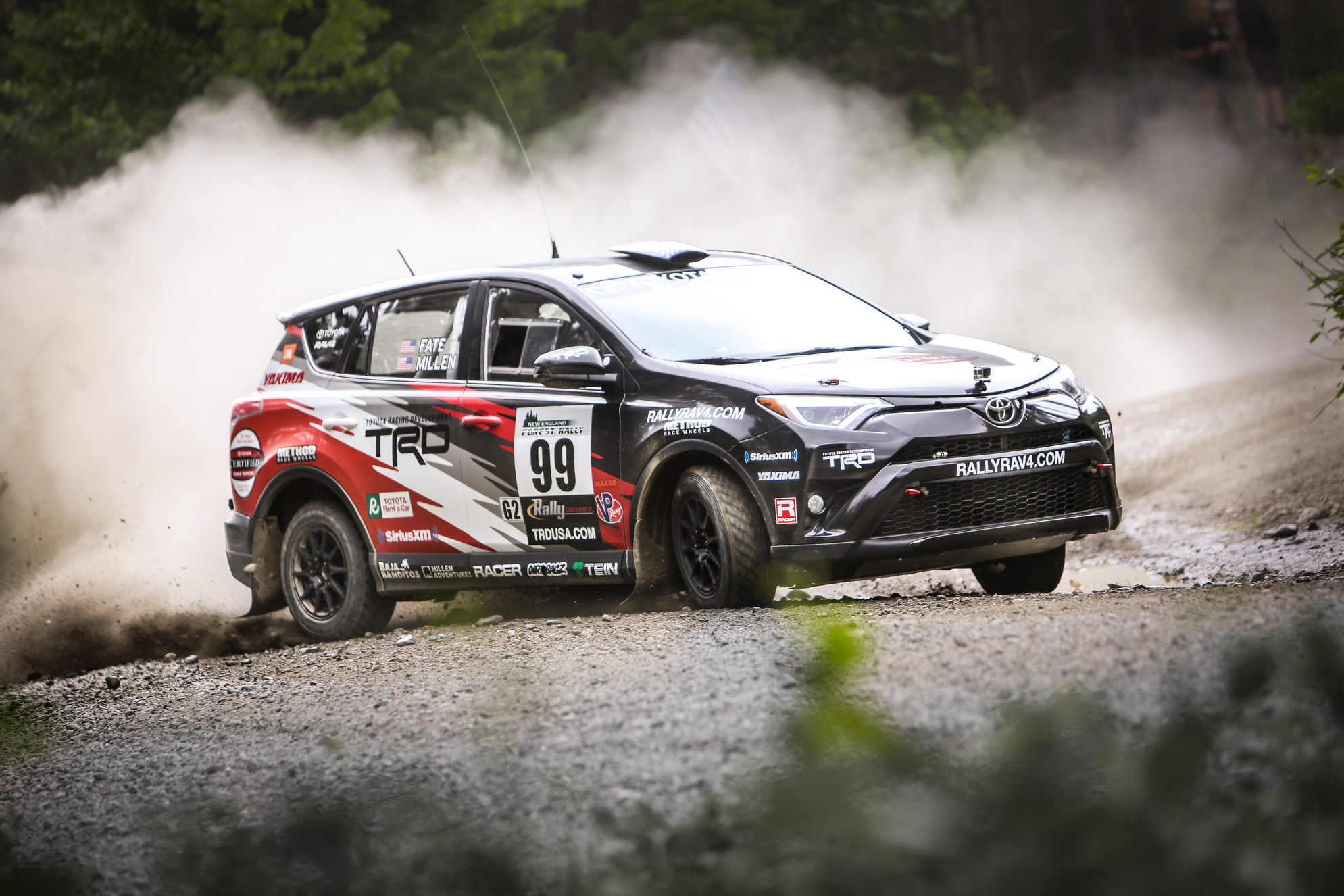 Ryan Millen and Rally RAV4 Have Sights Set on Championship

With just two races left in the national championship, the pressure is on for Ryan Millen, Christina Fate, and their Rally RAV4 team as they head into the next round this weekend at the Ojibwe Forests Rally in Detroit Lakes, Minn. The team is pushing mentally, physically, and mechanically to regain the coveted first place points position within 2WD Class. Millen and his RAV4 trail fellow racer Cameron Steely by just five points – 96 to 101.

“We need to be flawless,” said Millen. “One mistake by either of us could cost us the championship. We’re going to push hard, but have to remember that in order to finish first, first you must finish.”

Near the headwaters of the Mississippi River, the Ojibwe Forests Rally winds through the Two Inlets, White Earth, and the Paul Bunyan Forests on some of the best rally roads in the country. Around 50 vehicles are registered for this Rally America event, with Millen being staged within the pack at a favorable ninth position. The rally will take place over 14 stages and 140 miles, some of which will be cloaked in total darkness.

“We’re really good at night,” said navigator, Fate. “Ryan doesn’t have the fear factor, and doesn’t slow down as much as some of the other competitors. We’re pretty excited about the night stages.”

For Ojibwe, Millen’s mechanics performed their usual long list of race prep on the little RAV4, but they added a few new bits. New shocks, customized by longtime team supplier and motorsport application experts, Tein, underpin each corner. Tein’s technicians will be on hand to lend their support at Ojibwe. Additionally, the RAV4 has lost some weight – the archenemy of power and speed – in a few areas. An updated lighting package from Hella sits on the RAV4’s nose too.

Utilizing Toyota’s exhaustively-engineered original components is a massive tenet in the team’s philosophy, and ultimately, helps them achieve their frequent success. As the Rally RAV4 effort continuously proves, the RAV4’s original equipment is immensely impressive in its reliability, and with each select aftermarket piece added to the baseline, there is the overarching rule to never compromise this stock stoutness. Ojibwe has always been among the most demanding rounds on driver and machine, so keeping the Rally RAV4 in peak condition is imperative.

Millen and Co. are firm believers in longer distance rallies, as such races offers their crossover a chance to stretch its legs and truly demonstrate one of its most significant strengths: consistency. Millen is confident he will be fast from the start, but stresses that it’s more important to immediately mitigate any potential mistakes that could damage the RAV4. And so the strategy to be the best team with the best time at Ojibwe is simple: be reliable, be consistent, be smart.

“We’re digging in deep,” said Millen. “It’s easy to give the driver the accolades, but it’s the whole package. It’s all of us. I’m so lucky to be on this journey.”

Ojibwe is an annual two-day stage rally that attracts one of the largest fan bases for rally in North America. This year marks the rally’s 36th anniversary.