The New V8 Petrol Engines for the Porsche Panamera 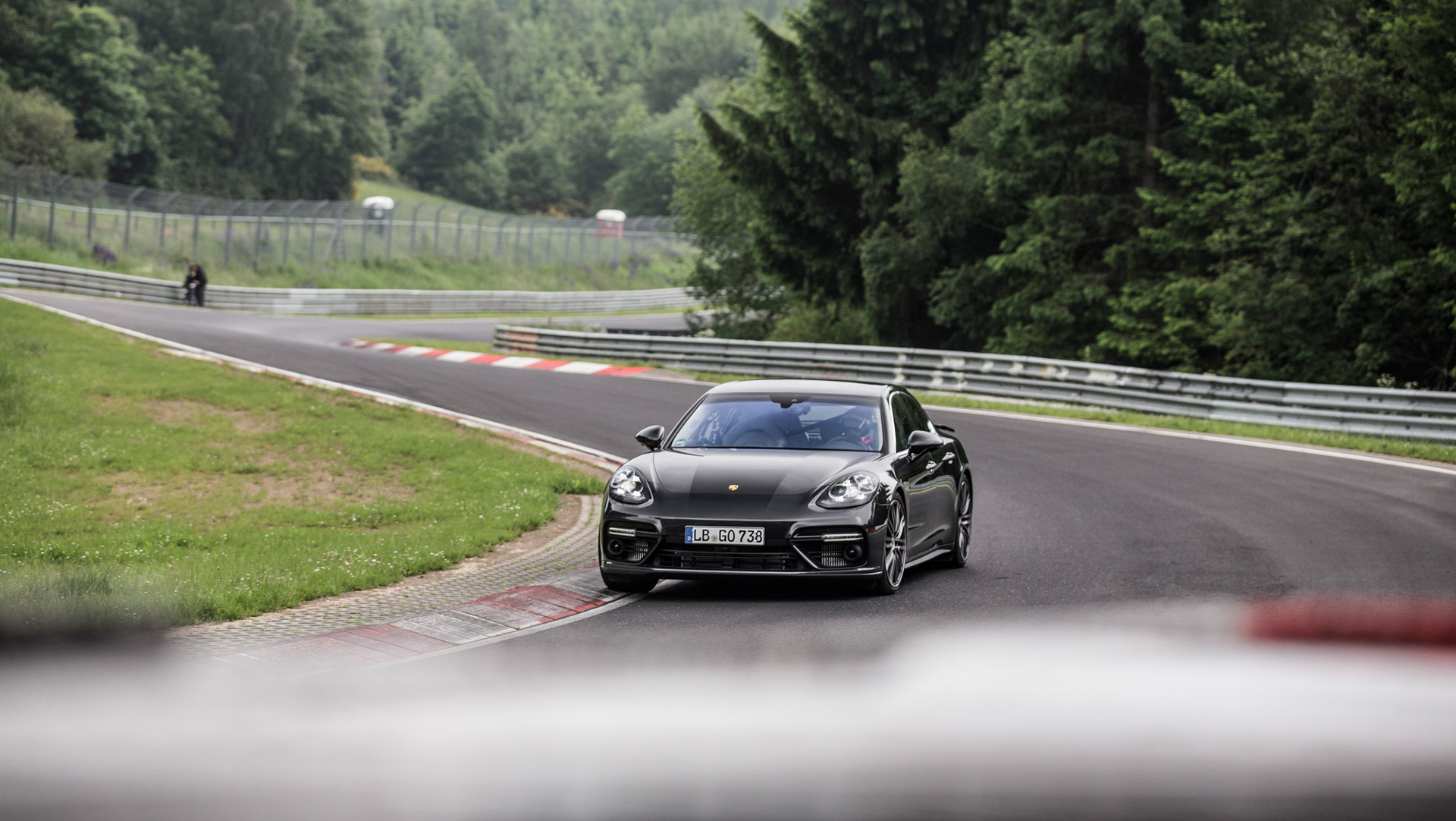 A highly innovative engine family has been created by the new eight-cylinder engines for the Porsche Panamera. Key development goals were maximum efficiency and extraordinary performance.

A highly innovative engine family has been created by the new eight-cylinder engines for the Porsche Panamera. Key development goals were maximum efficiency and extraordinary performance. In addition, the new engine line-up will exhibit a flexible structure with modular components, so that other variants such as hybrid versions can be implemented rapidly. To meet these standards, Porsche engineers developed a modular high-tech generation of V8 engines whose technical architecture brings parameters such as low fuel consumption and low emission figures into harmony with high power and torque figures – normally contrasting parameters. 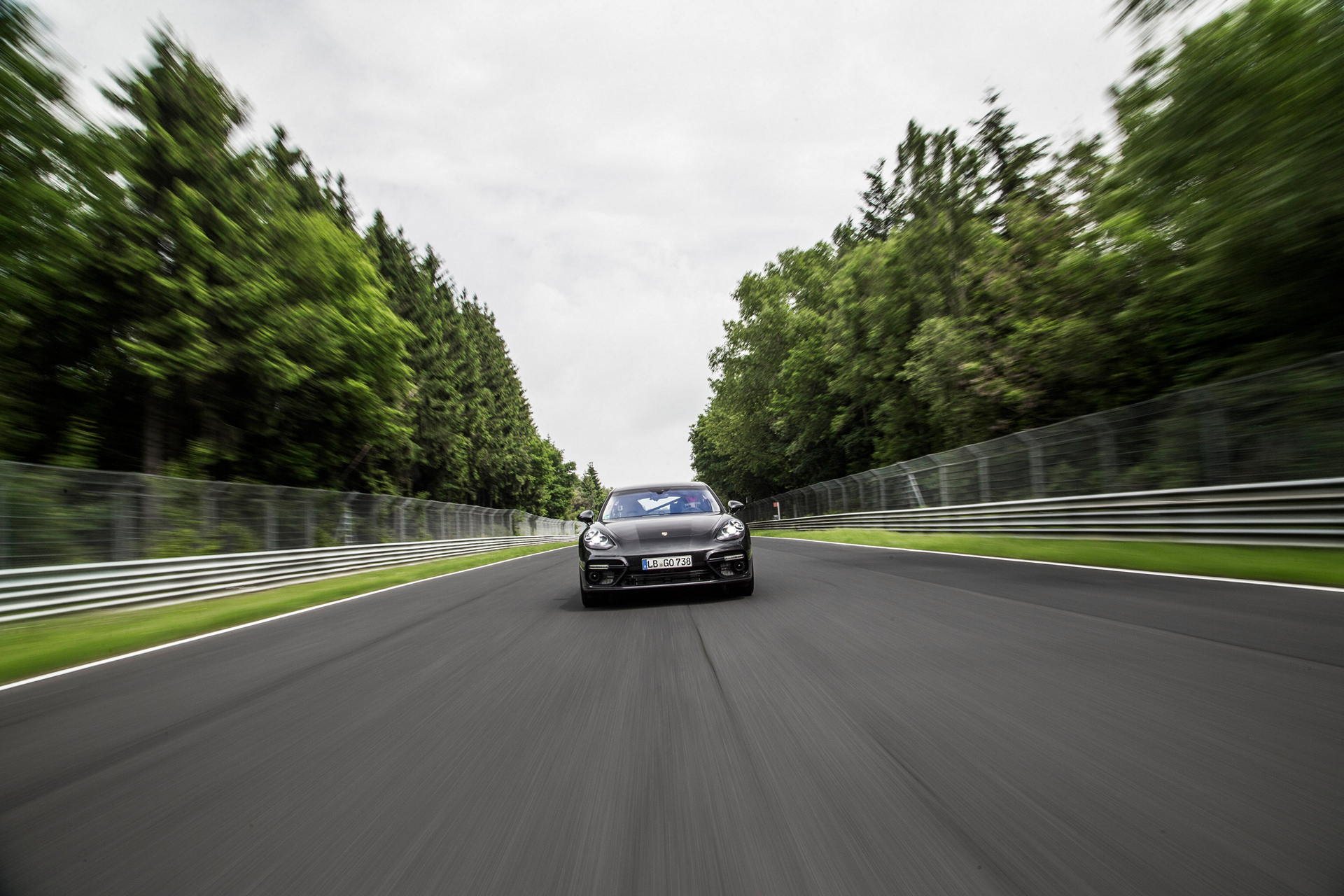 The Panamera Turbo will initially have the most powerful V8 petrol engine of the new engine generation. Its 4.0-litre engine develops between 5,750 and 6,000 rpm and reaches a peak power of 404 kW (550 hp). At just above 3,000 rpm the engine already breaks through the 250-kW (340 hp) threshold – pure power from a mid-range of engine speeds. Its maximum torque of 770 Nm is available between 1,960 and 4,500 rpm – pure force from very low revs. The eight-cylinder accelerates the Panamera Turbo from a standstill to 100 km/h in 3.8 seconds.

With the Sport Chrono Package, its sprint time is 3.6 seconds; after a breathtakingly short 13.0 seconds, the Gran Turismo is already moving at 200 km/h, and with the Sport Chrono Package this figure is even reduced to 12.7 seconds. The Porsche has a top speed of 306 km/h. These are impressive figures which underscore how easy the engine is able to power the Panamera with its power-to-weight ratio of just 3.6 kg/hp. The extraordinary performance figures stand in contrast to an improvement of up to 1.1 litres per 100 km in its combined fuel consumption of 9.4 – 9.3 l/100 km (New European Driving Cycle or NEDC); this equates to CO2 emissions of 214 – 212 g/km.

The new eight-cylinder engines have a longitudinally-mounted V-engine design with a cylinder bank angle of 90 degrees. The four intake and exhaust camshafts can each be adjusted 50 degrees and are chain driven. The displacement of the four valve per cylinder engine that can rev up to 6,800 rpm is 3,996 cc. The bore and stroke are both 86 mm for a quadratic ratio. The dominant technical characteristics exhibited by the V8 twin-turbo direct petrol injection engines are their new charging concept (central turbo layout), injectors located centrally in the combustion chamber, nearly wear-free coating of the cylinder linings and cylinder deactivation. These are technical features that have definite effects. Take the example of the Panamera Turbo: although its peak power has been increased by 30 hp and its torque by 70 Nm, its fuel economy is 10 per cent better.

The Panamera Turbo has the first Porsche engine to be equipped with a new adaptive cylinder control system. The system makes the eight-cylinder engine a four-cylinder engine in part-load operation: temporarily and imperceptible to the driver. The results: fuel economy has been improved by up to 30 per cent in the four-cylinder phases, depending on power demand. Deactivation and reactivation of the cylinders are controlled by a two-stage sliding cam system. In this process, the intake and exhaust cam adjusters on the camshafts for cylinders two, three, five and eight are deactivated or reactivated as necessary. The intake and exhaust valves of these cylinders are completely shut down in four-cylinder operation. Cylinder deactivation is operational over an engine speed range from 950 to 3,500 rpm and up to a torque limit of 250 Nm.

Up to 9.5 kilograms lower weight and compact package

A high-priority aspect of the eight-cylinder engine is its compact construction; the aluminium engines are also up to 9.5 kilograms lighter than their predecessors. The weight reduction was achieved by various design measures. For instance, the high-strength aluminium cylinder crankcase with its bearing cover weighs just 39.1 kilograms – this represents a weight reduction of 6.7 kilograms or 14.6 per cent compared to the comparable 4.8-litre engine of the previous model. Since every gram counts, every component was also analysed and made lighter if possible. Take the example of the crankshaft drive. Porsche reduced its weight by 1.4 kilograms.

The special conceptualisation of the crankcase drive with its crankshaft supported by five bearings is another element of compact engine design. Background: the crankshaft drive is distinguished by the use of an intermediate shaft that is used to drive the water pump and the timing drive; thanks to the toothed gear drive of the water pump being inside the engine, Porsche was able to compress the engine package and reduce friction power losses. Also having a positive influence on mounting space and weight are the central turbo layout and a 0.8-litre reduction in engine displacement. The progress that has been made is all the more noteworthy, because the maximum specific power of the new 4.0-litre V8 is much higher than that of the 4.8-litre V8. The new engine of the Panamera Turbo, for instance, has a specific power of 137.5 hp per litre; this figure was 108.3 hp/l in the previous model.

Central turbo layout – a design trait of all Panamera engines

The new V8 petrol engines of the Panamera exhibit exceptional agility right up into high rev and power regions. At the same time, the eight-cylinder engines already produce their maximum torque at very low revs. This is an engine characteristic that also applies to the new V6 petrol engines and V8 diesels. This type of sports car dynamic is largely attributable to the central turbo layout that is a new conceptualisation of twin-turbo charging that is being used in all models. Take the Panamera Turbo, for example: to keep the engine packages as compact as possible, the turbocharger system is integrated centrally in the inner V between the cylinder banks. The Panamera Turbo has elaborately engineered twin-scroll turbochargers that Porsche uses to supply compressed air to the combustion chambers of the V8. The two turbines that are designed to be counter-rotating – due to the limited mounting space – generate very high torque figures at the lowest of engine revs.

The maximum charge pressure of the twin-scroll turbochargers is 0.3 bar (3.0 kilopascals). A compressor driven by the exhaust gas stream compresses the intake air in each turbocharger. The flow of this process air is configured as a dual-branch system for optimal engine response. It flows from the outside, and – after passing through the intercoolers on the left and right sides upstream of the V8 – the process air passes through one throttle valve on each side and into the left and right cylinder banks. The two large volume-optimised and pressure loss optimised intercoolers ensure that the temperature of the process air, which has been heated by the compression process, is further reduced significantly. This boosts the density of the air and thereby the extent to which the cylinders are filled with oxygen. The results: even greater efficiency.

Emissions control with catalytic converter located in the inner V

A material highlight of the V8 engines is iron coating of the cylinder linings in the cast aluminium block. It significantly reduces internal friction, wear and oil consumption. In the manufacturing process, an atmospheric plasma spray method is used to apply an extremely tough and low-friction iron coating to the cylinder surface. The layer is only 150 microns thick, but as suggested it offers ideal wear properties, and indeed nearly independent of fuel quality.

Compared to previous concepts implemented in V8 engines, lining wear is reduced by one-tenth at the motion reversal point of the piston rings and is thereby nearly eliminated for all practical purposes. The design of the cast pistons, which are very rugged and lightweight, has been adapted to the new iron coating process. The piston rings have a chrome nitrite coating, which adapts wear resistance to the iron coating of the cylinder linings. In the interplay of all these design measures, oil consumption has been reduced as well: by up to 50 per cent compared to the previous engine.

Every Porsche must fulfil the requirement of reliable operation under racetrack driving conditions. Naturally, this represents a very challenging stress test. The new Porsche Panamera meets this challenge impressively – including in its newly designed oil circulation system. The layout of the oil circulation system with wet sump lubrication even compensates for extreme lateral and longitudinal accelerations.

A special feature of the lubrication system implemented here is that Porsche has partitioned the oil passages into oil supply for the engine and oil supply for the cylinder head. The supply openings in the oil passages are tailored to the needs of the specific components in the oil circulation system. This has a positive effect on the time required to build up oil pressure at engine start. The very fast oil pressure build-up is also assisted by a check valve in the oil pump – it ensures that the large volume of oil in the engine’s inner V does not flow back into the oil pan, causing the engine to run empty. The oil pressure itself is built up via a fully variable vane oil pump, and a valve is used to control it to map-specific figures. Integrated into this control valve is oil pressure limiting, which automatically activates for an engine start and at low outdoor temperatures.

Fastest luxury saloon on the Nürburgring-Nordschleife

An electronic switching valve located centrally in the inner V also controls the piston spray nozzles according to piston cooling needs and map parameters. This type of control reduces churning losses, and the oil circulation volume can also be controlled for the given operating strategy. The Porsche Panamera Turbo even makes it possible to drive on the Nürburgring-Nordschleife with its numerous bends and rapidly changing heights with extreme lateral acceleration. The car’s measured lap time of 7 minutes 38 seconds demonstrates this impressively and makes the new Panamera Turbo the fastest luxury saloon on the Nürburgring-Nordschleife by far.